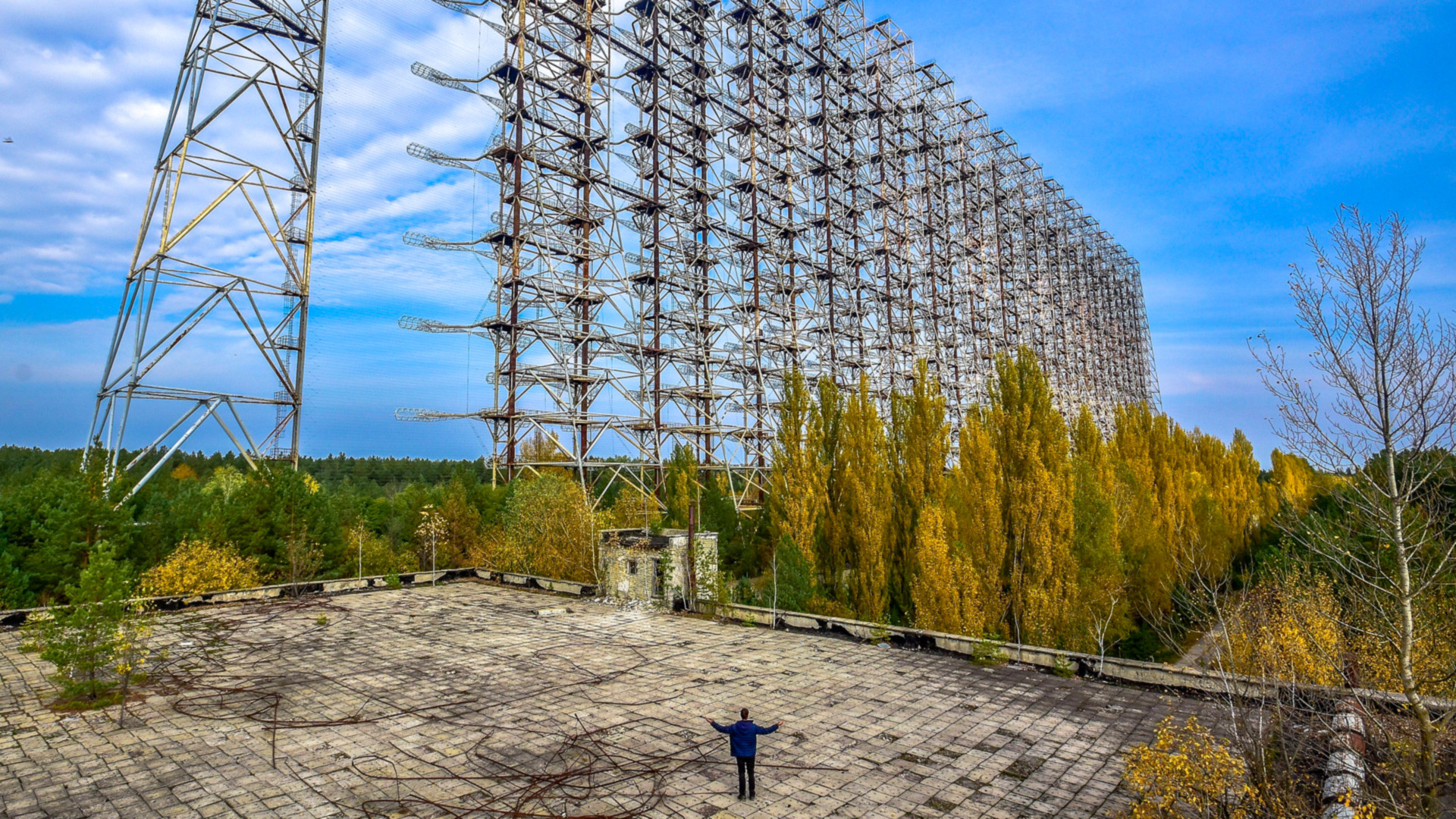 Legion Media
It was a successful top-secret air defense project ruined by the Chernobyl disaster.

The Cold War is well known as a period when the tensions between the USSR and the western countries were catastrophically growing. The arms race made the weapons develop, so the USSR administration realized that the country needed to improve its air-security technologies. 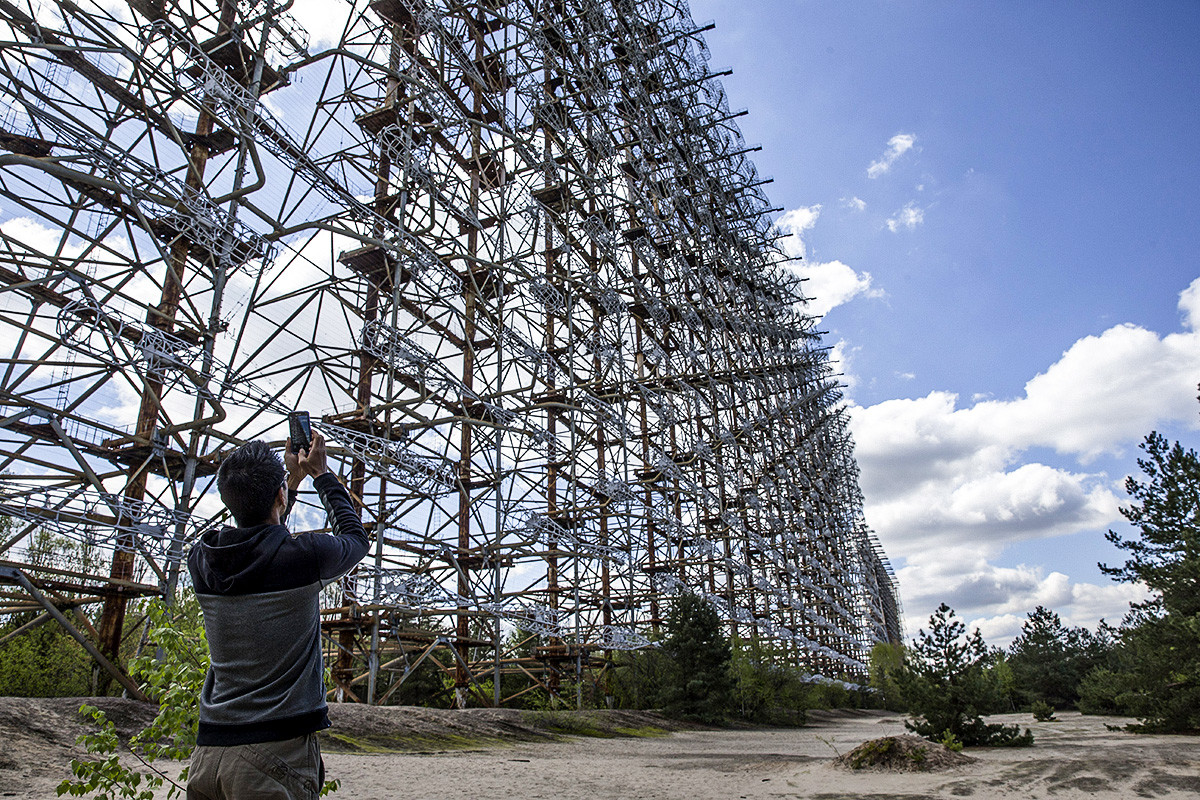 tourist takes a photograph of the Duga radar system operated by Soviet Union in Chernobyl.

It was estimated that it would take a ballistic rocket launched from the U.S. 20-30 minutes to reach the USSR. The defense forces needed a system to detect a missile 2-3 minutes after launch so that there would be enough time to take measures and take it out. In the middle of the 1960s, constructor Vladislav Repin and academician Alexander Mints offered a three-level system of rocket radars. The first level was the satellites that tracked the flame of the missile in the infra-red spectrum. The second was the over-the-horizon radars that used the radio waves to find the flames and the third - the ground-based radars that located a rocket itself when it came close enough to the country’s territory. The three levels helped minimize the risks of false systems reactions, while the responsibility of the staff for their mistaken decisions grew. 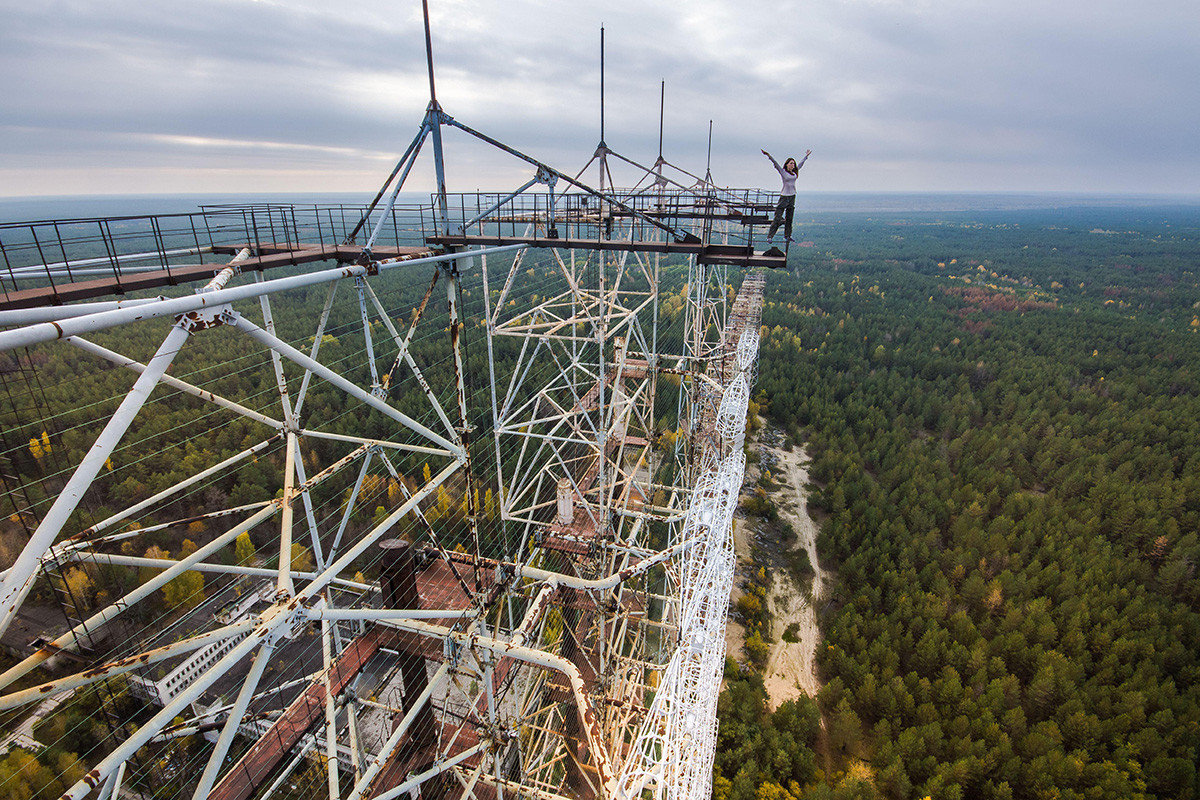 The problem appeared at the second level: physicists didn’t have the technology to make the over-the-horizon radars. The researchers, headed by engineer Frants Kuzminsky, turned to a method that scientist Nikolai Kabanov had invented in 1946 to locate planes early. It worked with the ionosphere - the upper layer of the Earth’s atmosphere at the altitude of 60-1,000 kilometers that contains a lot of free electrons because of so-called space radiation. It was discovered that approximately at the height of 300 kilometers, the ionosphere reflects the radio waves, which enables them to travel around the earth. The method of Kabanov worked the following way: a source sends a radio wave, it locates a plane at a distance of 900-4,000 kilometers, reflects off the plane and returns to a receiving antenna that analyzes the signal and finds out the size, speed and the direction of the flying object. This method could serve to track the missiles, too: the radio waves would just reflect the plasma gas trace of the missile instead of a plane. 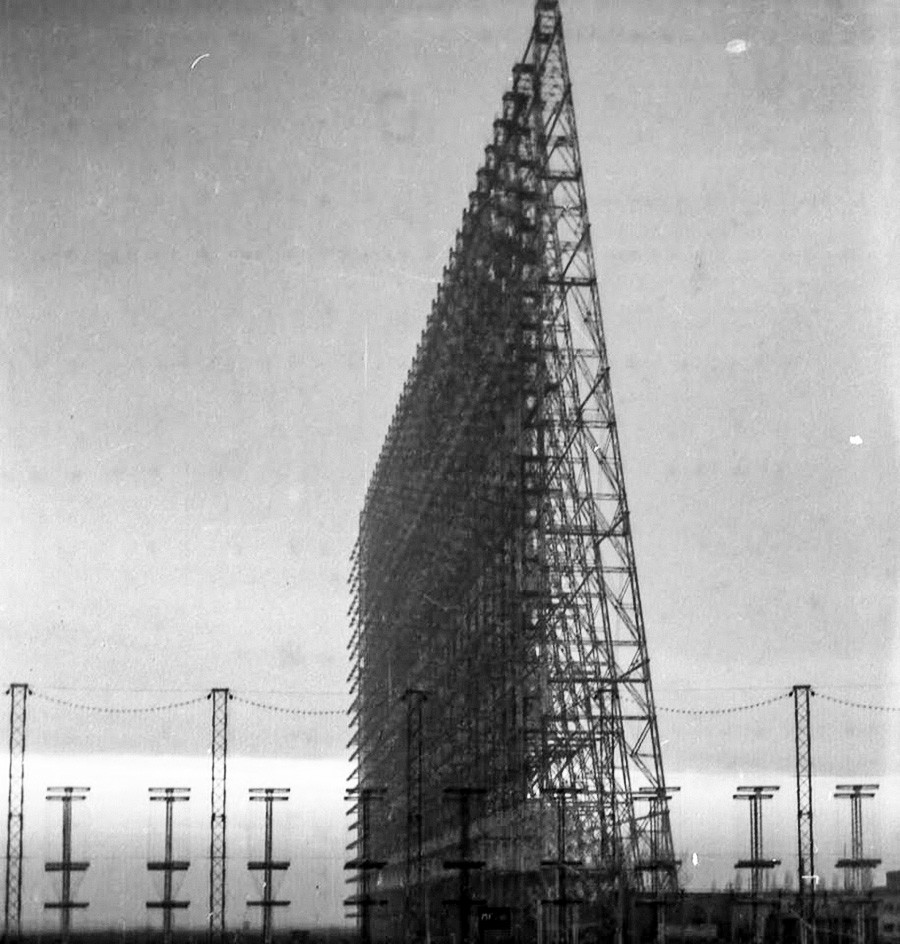 The first ‘Duga’ complex near Nikolaev.

The method needed tests, so, in the middle of the 1960s, the construction of the first experimental over-the-horizon radar was started in the territory of Ukrainian Soviet Republic, near the city of Nikolaev (480 kilometers south-east of Kiev). The project was code named ‘Duga’ (“Arc”). It appeared to be huge: its receiving antenna was 135 meters high and 300 meters long, the transmission antenna - 85 meters high and 210 meters long; and there also was a 90-meter long building with 26 huge two-floor transmission units. The making of these transmission units was fraught with danger and difficulties. The workers of a machine shop in Dnipropetrovsk (now known as Dnipro, 400 kilometers south-east of Kiev) couldn’t fulfill this task themselves, so Kuzminsky formed extra brigades of specialists to help. After the construction was finished, it took the specialists a year to adjust ‘Duga’ to locate the targets correctly. The complex started operating on November 7, 1971. 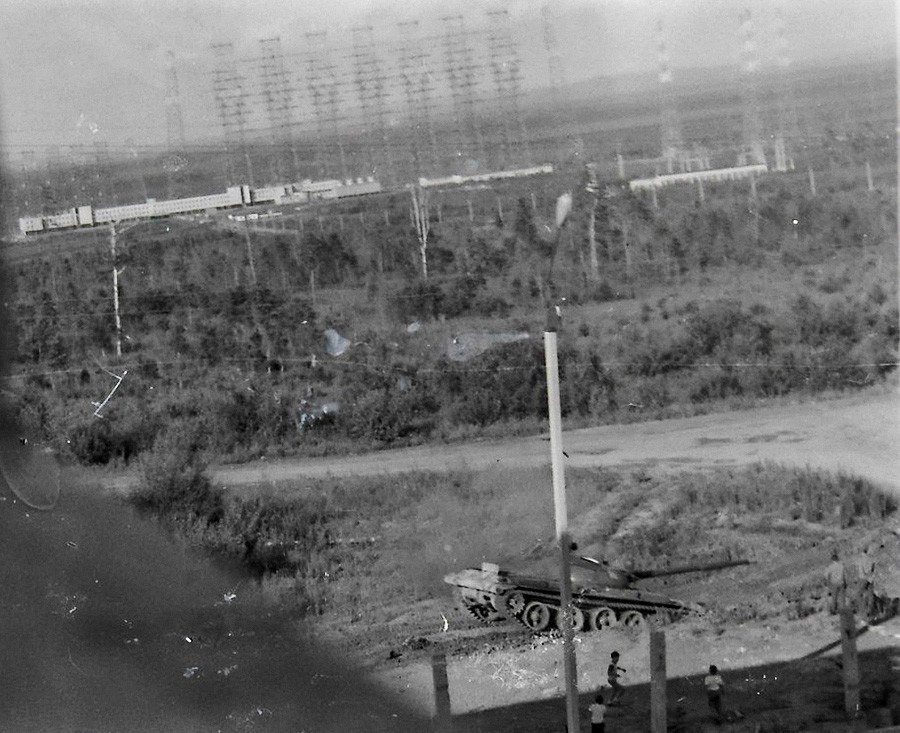 The tests were successful, so Frants Kuzminsky offered to build two more ‘Duga’ complexes in military towns on the different sides of the USSR. The construction started in the 1970s. The first of these radars started operating in combat mode in 1982 on the territory of Russia’s Far East near Komsomolsk-na-Amure (6,070 kilometers south-east of Moscow) and, later, the second one was accepted into service again in the Ukrainian SSR, near the city of Chernobyl (90 kilometers north-west of Kiev). Such location of stations minimized the effect of the polar cap in the ionosphere. The cap prevents the moving of radio waves and when it blinds one side of the country, at another one the signal would be perfect. 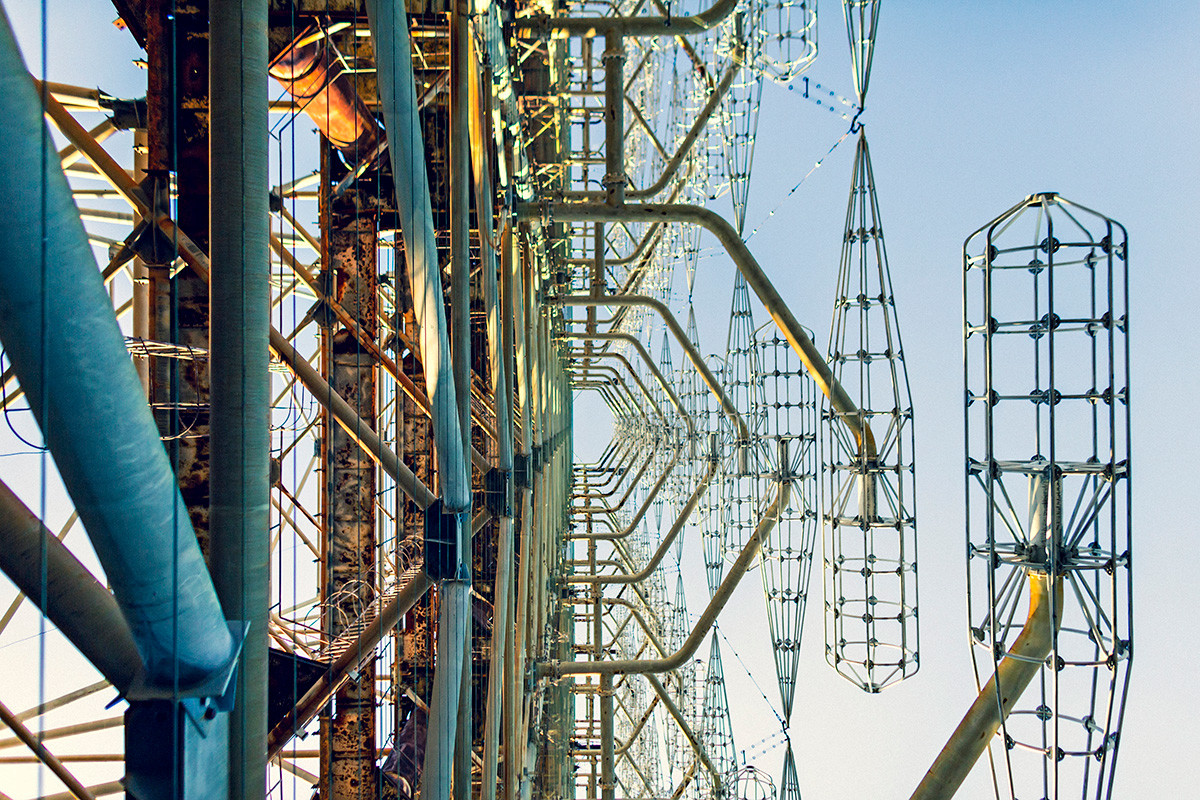 The close view of ‘Duga’: the shiny parts are radiators.

Two new complexes were significantly bigger than the first one in Nikolaev. The main radar in Chernobyl consisted of two receiving antenna units: the bigger - 140 meters high and 900 meters long and the smaller - 90 meters high and 500 meters long. The 300-meter-long transmission antenna unit was built near Chernigov, so there was a distance of about 80 km between the parts of the complex. ‘Duga’ of Chernobyl wasn’t very easy to build: the receiving antennas needed thousands of tons of extra strong framework tubes, which there was a real deficit of. Also, these tubes held special radiators formed like elongated baskets. The radiators had to be covered with zinc to protect them from rusting. 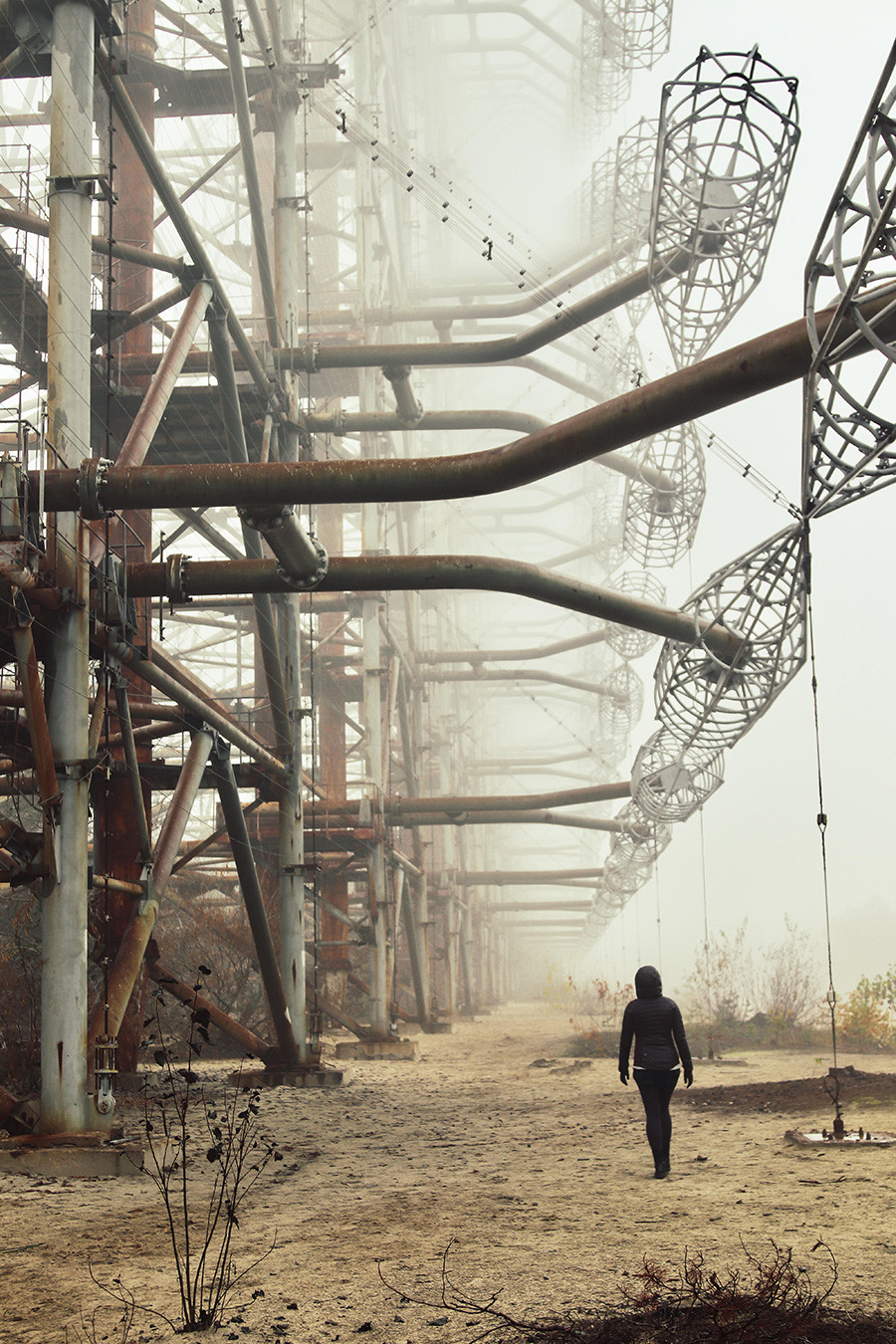 ‘Duga’ was top-secret, so practically nobody knew the origin of the sounds. Sergey Babakov, a historian of the Chernobyl Museum in Kiev, recalls that even some Soviet officers had no idea what the complex was built for and some people believed it was a weapon to destroy the enemy with an electric impulse. The radar was sending its impulses about ten times a second and, from 1976 (while both complexes were operating in test mode), this signal began to appear in the radio ether in many countries. It was soon established that the source was located in the territory of the USSR. The sound was similar to frequent knocking, so ‘Duga’ was nicknamed the ‘Russian woodpecker’. None of the known methods helped to protect the ether from the specific noise, as the radar sometimes changed its frequency and tone, but it was getting on people’s nerves, so several countries like Norway, Sweden, Switzerland and others voiced their protest to the USSR for breaking an international convention for radio frequency allocation.

The USSR administration decided to keep it a secret and just added noise removal into the modernisation program for ‘Duga’. It also included technology to better avoid the polar cap in the ionosphere, more developed ways of missile detection and other improvements, but ‘Duga’ ended up just being terribly unlucky. On April 26, 1986, the Chernobyl disaster happened: reactor No. 4 of the local nuclear power plant blew up. ‘Duga’ was situated just ten kilometers away from the plant. Of course, everything at the complex stood in its place, but the gamma-ray radiation made its work no longer possible. The military town around ‘Duga’ was evacuated, but the staff stayed there in a special underground barrack until 1987, when all the equipment was brought out. It survived the catastrophe unharmed: everything was kept in an area protected from the nuclear radiation.

The equipment was moved to Komsomolsk-na-Amure, but fate was unkind to ‘Duga’: due to new ideas in air defense, the further development of the project was abandoned in 1988 and, in the 1990s, the equipment at the Far East was destroyed by a fire. It brought the story of ‘Duga’ to an end. The complex at Komsomolsk-na-Amure was dismantled in 1998. In 1995, the experimental radar at Nikolaev was stopped and, in 2001, it was pulled down. The ‘Duga’ of Chernobyl is still standing, due to its location within the abandoned area. ‘Stalkers’ (so-called illegal tourists of the Chernobyl exclusion zone) are attracted by this giant, really spectacular and fascinating construction, despite its deadly danger: the tubes are nowadays terribly rusty. However, this complex is the last that remains and stands as a monument to the late USSR’s air defense.