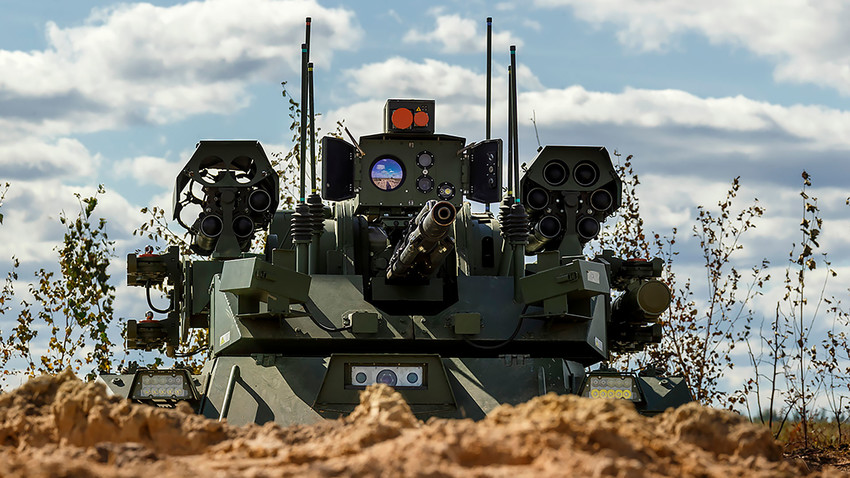 Uran-9 / Russian Defense Ministry
The Russian army has dozens of types of land, air, surface and underwater combat robots in varying degrees of readiness. Many of them are already taking part in tests and drills.

"There is a myth abroad that Russia lags behind in robotics," says Viktor Murakhovsky, a leading Russian military expert and editor-in-chief of Arsenal of the Fatherland (Arsenal Otechestva) magazine. In fact, no other army in the world possesses such a variety of uncrewed vehicles and drones as Russia. And this trend looks set to only increase.

"Today’s Russian army is the successor of the Red Army, which created remote-controlled tanks back in the 1930s. After the war, pilotless planes were developed in the USSR, and I was personally involved in the work on remote-control systems for now modern tanks. Tremendous progress is being made in these areas. And if Russia is lagging somewhat in drone technology, in terms of land and sea robots it has the most extensive program in the world," explains the expert. 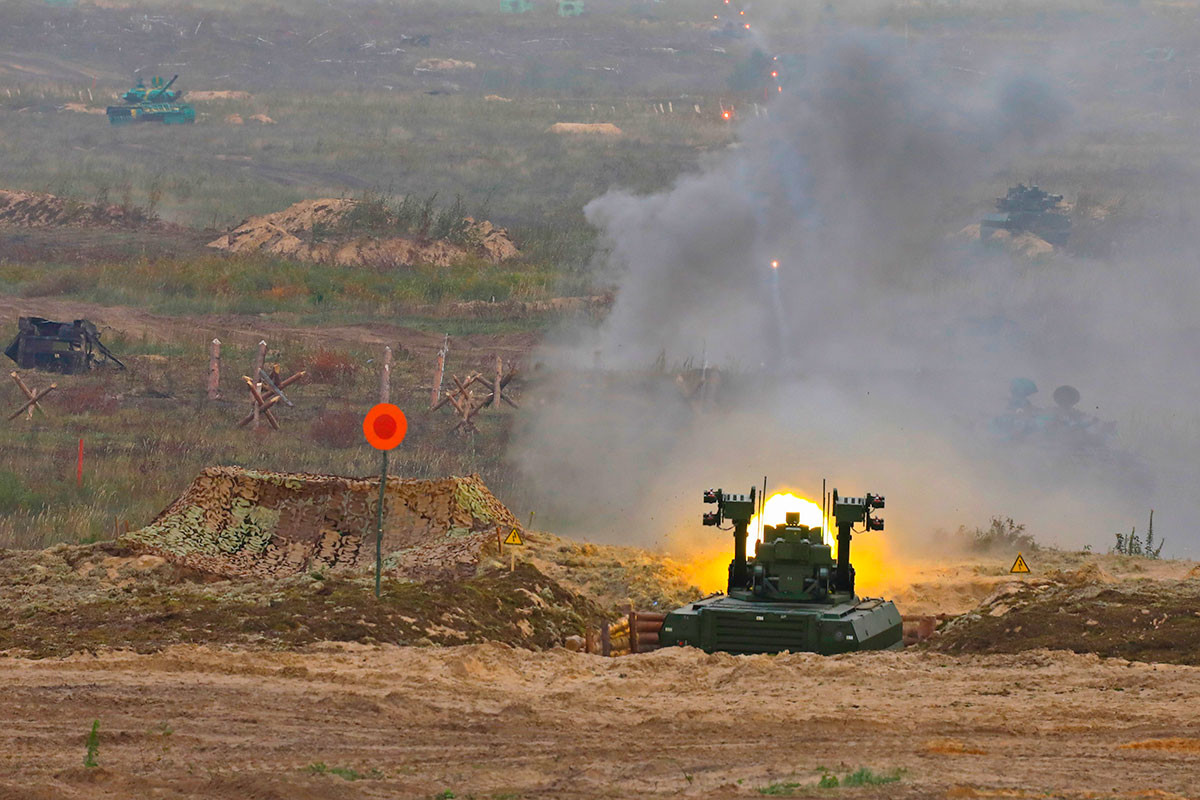 Uran-9 at the West-2021 military exercises

Russia and its strategic ally Belarus held the large-scale Zapad-2021 exercises in September, which demonstrated both technical and tactical innovations. It introduced the general public to the BM-19 infantry vehicle with Epoch combat module, and to the affectionately named, but deadly 'Lastochka' (Swallow) military drone. However, the biggest splash at Zapad-2021 was made by the aviation and ground-based robotic systems. During the main phase of the exercises, three types of aircraft (Forpost, Lastochka, Inokhodets) and two versions of combat robots (Uran-9 and Nerekhta) attacked a hypothetical enemy. On the other days, Platform-M robots armed with machine guns and grenade launchers also made an appearance. 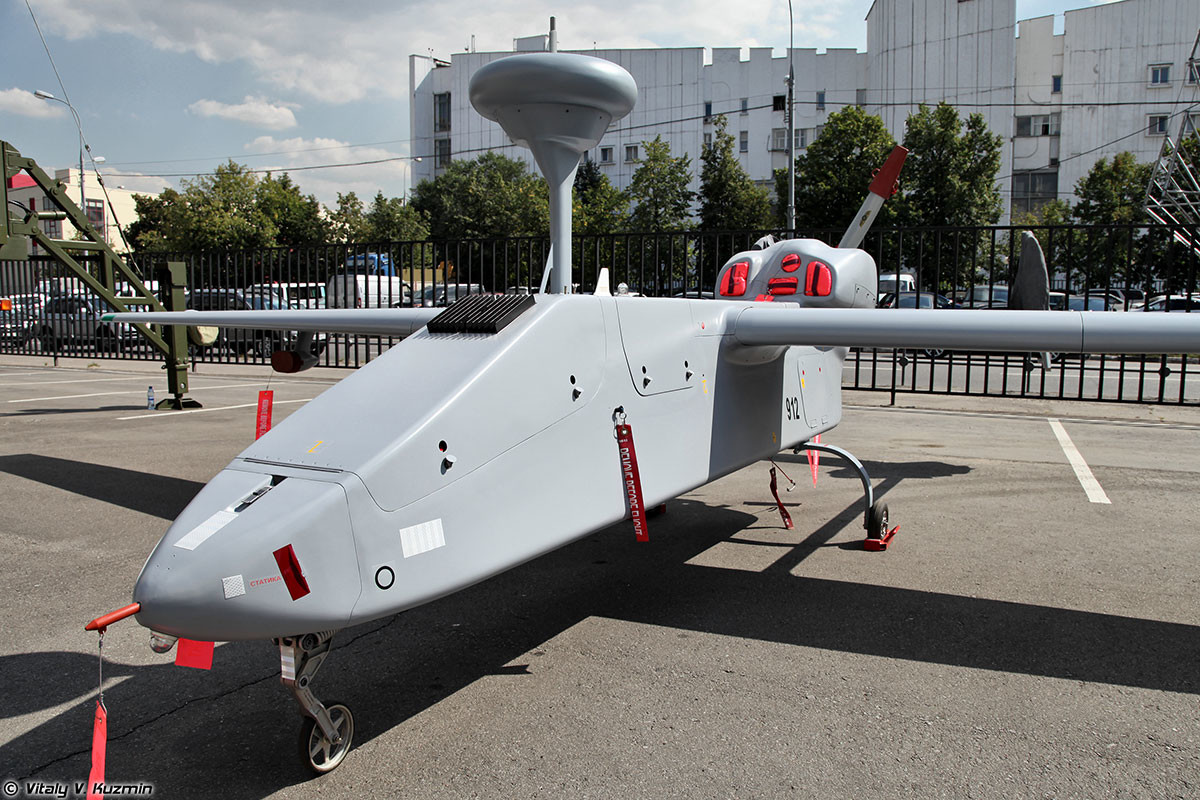 The Zapad-2021 drills were the first experiment in the use of ground robots in the same formation as humans. Coordinating with motorized rifle units, uncrewed Uran-9s and Nerekhtas attacked and destroyed various targets. The larger and heavier Urans fired guided missiles at enemy armored vehicles. The robots also provided covering fire for human maneuvers on the training battlefield.

The Uran-9 is currently Russia’s largest robot. A medium-class complex, it has a characteristic jug-eared appearance due to the launchers located on the sides. The combat vehicle is armed with a 30-mm automatic cannon, Ataka anti-tank guided missiles and Shmel flamethrowers. It weighs up to 12 tonnes, a little less than the BMP-2. 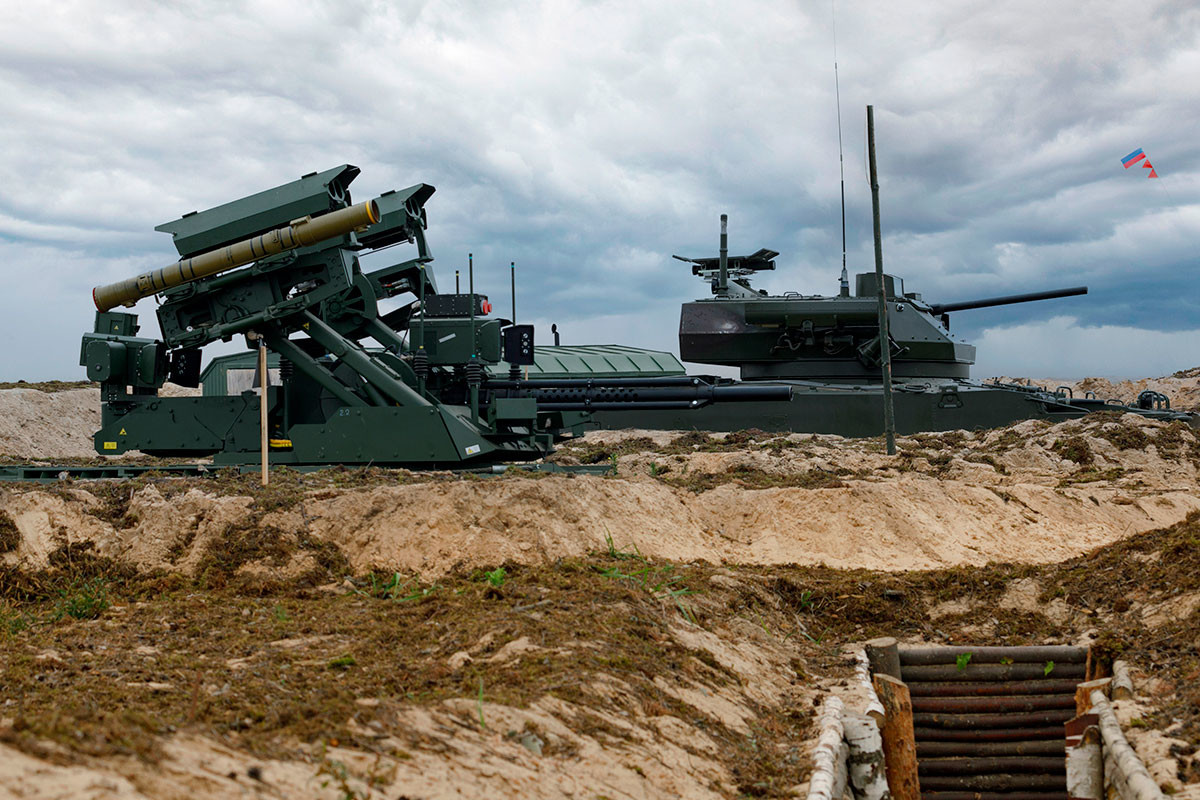 Uran-9 and the infantry fighting vehicle, called the B-19

A whole host of other Russian drones and robots are in development. Among the offensive uncrewed aerial vehicles (UAVs) are the Altius, Okhotnik, Sirius and Karnivora programs, the Platforma helicopter drones, the Molniya group-use system, and others. The weapons-carrying ground robots will be joined in the future by the heavy Sturm and medium-sized Soratnik systems, Marker robots and probably even the Armata uncrewed tank.

In the words of Denis Fedutinov, a Russian expert in the field of pilotless aviation, the Zapad-2021 exercises were notable for the extensive use of various uncrewed and robotic systems, some of which were deployed for the first time. What's more, he said that they did not represent the entire range of aerial drones being created by Russia: for example, the Forpost and Inokhodets are set to be supplemented with the heavy high-altitude Altius and the heavy stealth Okhotnik.

"The drive to catch up in this area, which led to the creation of a wide basic line of UAV systems, entailed significant financial and time costs, which was a lesson for the Russian, so now it gives high priority to uncrewed developments," Fedutinov notes. 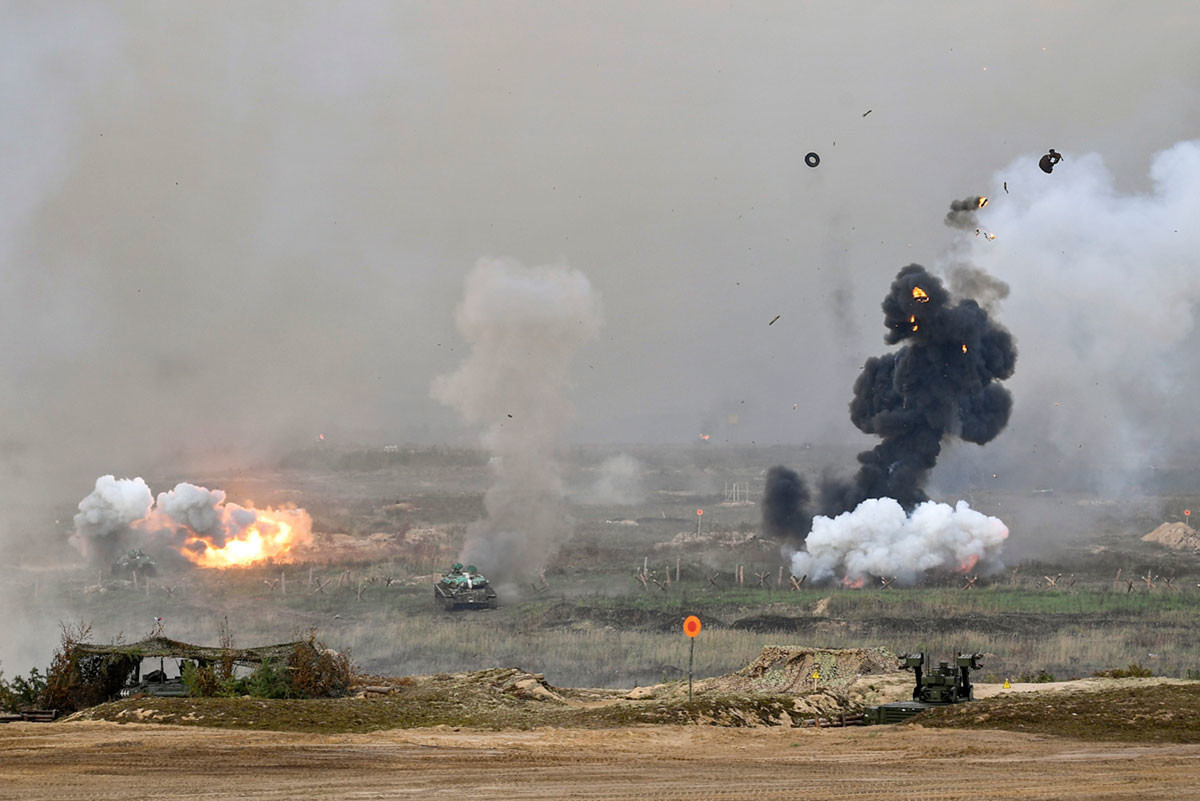 Uran-9 at the West-2021 military exercises

Meanwhile, Murakhovsky notes that Russian technology today covers the entire spectrum of ground robots: from reconnaissance, EOD and support vehicles to combat vehicles. "In terms of range, Russia has everything from miniature sphere-shaped robots that can be launched by hand on the ground, to heavy complexes like Sturm on a tank-based platform. And in terms of payload variety, Russian robots, whether combat or reconnaissance, are in the vanguard," he adds.

Russia is also working to strengthen the automation of conventional human-operated weapons and equipment. The on-board AI, or so-called virtual pilot, of the Su-57 fighter plane allows it to perform most missions without a pilot in the cockpit. Even old-style towed howitzers are due to be automated and controlled remotely (by installing communications devices and electric motors on the levers, previously rotated by human soldiers).

For comparison, the US army today uses a developed system of UAVs, but there is a gap when it comes to uncrewed ground vehicles. The US military had previously launched the "Future Combat Systems" program, which sought to develop a robotic assault vehicle that would weigh up to 10 tonnes and be armed similarly to the Russian Uran, with 25-mm cannon, machine gun and guided anti-tank missiles. But the project was scrapped. Currently, US ground forces use only mini-robots armed with machine guns, weighing no more than 45 kg. 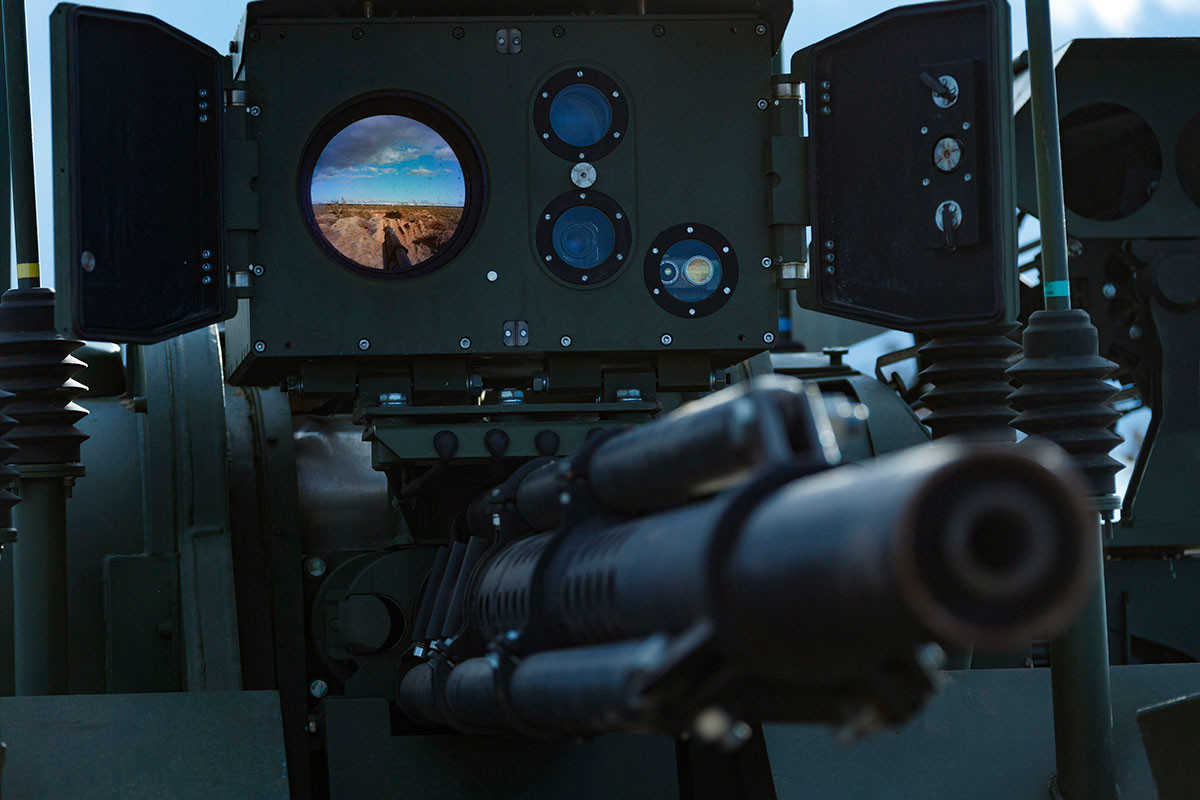 Alongside robotization, the Russian military is developing the idea of a unified reconnaissance-and-strike system, much like the Network Centric Operations program in the US. Both approaches envisage that all pieces of combat-active equipment – be they planes and drones in the air, combat vehicles, soldiers and robots on the ground, or satellites in space – be combined into a single communications system. Moreover, this data exchange is to take place in real time to achieve information superiority over the enemy.

Specific data transmission and processing systems are already being installed on selected weapons, including tanks, howitzers and attack aircraft. Connecting military aerial drones and combat robots to the unified information space with the increased application of AI will likely form a future stage of this program.

As Murakhovsky notes, some areas of military operations could become completely robotized in the future. “The Russian military sees robots being deployed to protect the army’s flanks, guard the rear and perform other tasks, such as storming enemy positions. It will be a kind of independent forward echelon that carries out tasks autonomously without human participation, for example, in an urban environment, where battles could result in high losses of personnel,” he clarifies. 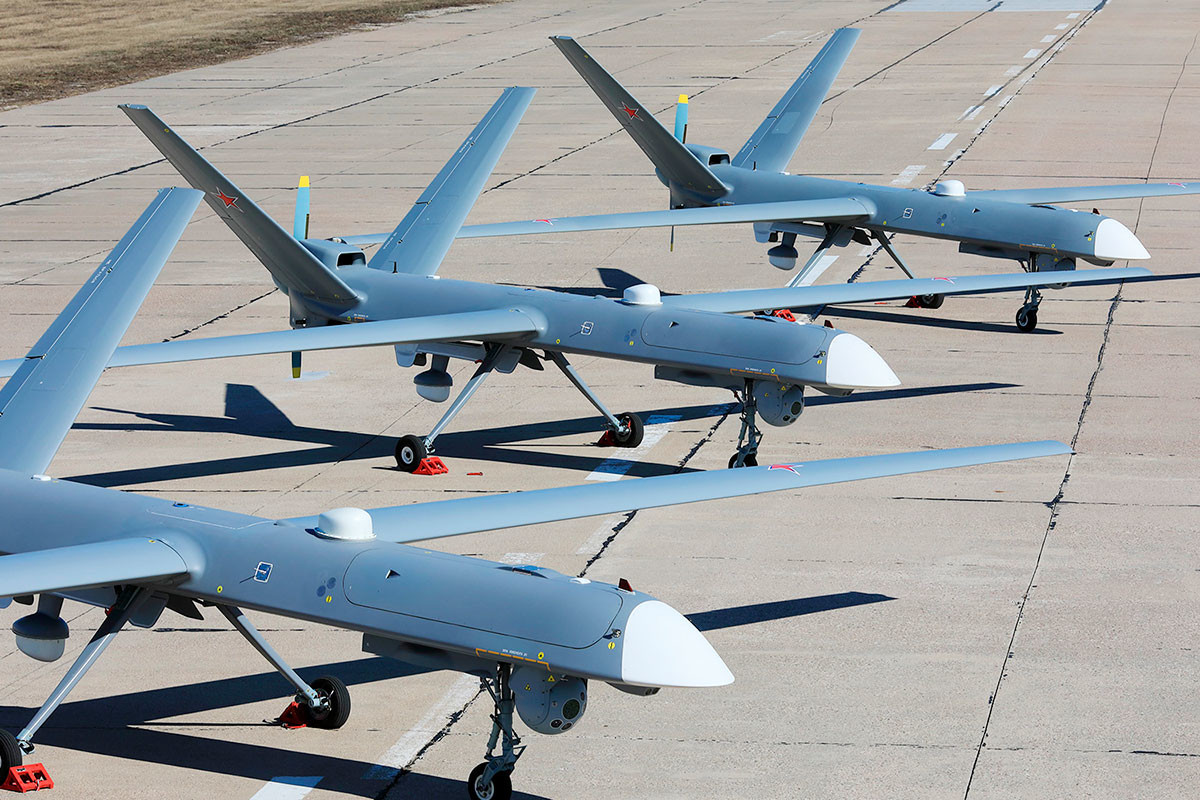 In his expert view, Russia has already demonstrated the independent operation of uncrewed combat systems. The Onyx anti-ship cruise missiles work in a “pack” with “leader” and “follower” missiles. The operating algorithm provides for a variety of options. It determines the main target in the formation of enemy ships, allocates other targets within the pack and sets the trajectories. “The group does all this autonomously,” says Murakhovsky.