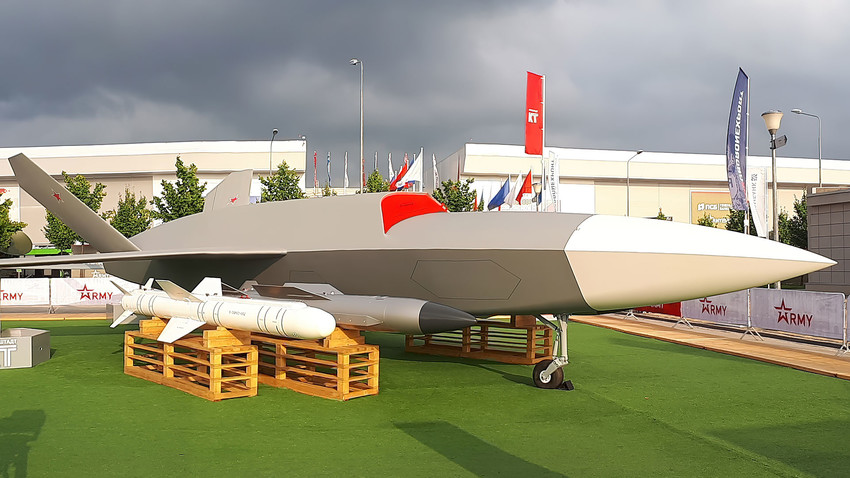 Kirill Borisenko (CC BY-SA 4.0)
These machines with artificial intelligence might become the leader of kamikaze drone armada and automatically give them orders.

At the end of September 2021, Russian drone producer The Kronshtadt Company announced that its latest drone, the ‘Grom’ (Russian for “Thunder”), is ready to take part in the Defense Ministry’s tender for medium-altitude long-endurance drones (MALE drones). The exact dates of the tender are to be announced by the Defense Ministry of Russia in the coming future.

“The drone allows an army to use all the latest fighter jet missiles and bombs on drones and destroy enemy lines under the heavy fire from air defense systems,”, the company stated.

The main goal of the company was to create an unmanned aerial vehicle that would take on an enemies’ first missile strikes and “clear” the way for fifth-generation fighters and the latest bombers with pilots on board.

“It’s a high-speed unmanned aerial vehicle capable of using all modern aviation weapons. We are ready to modify the aircraft to meet any customer requirements,” the company added.

According to media reports, ‘Grom’ is poised to become a leader of the kamikadze drone armada.

We previously reported about drone armada technologies that are being actively developed by the Kalashnikov Concern and might be led by the ‘Grom’ drone. Click here to find more information about the specifics of the UAVs and their combat application in the future. 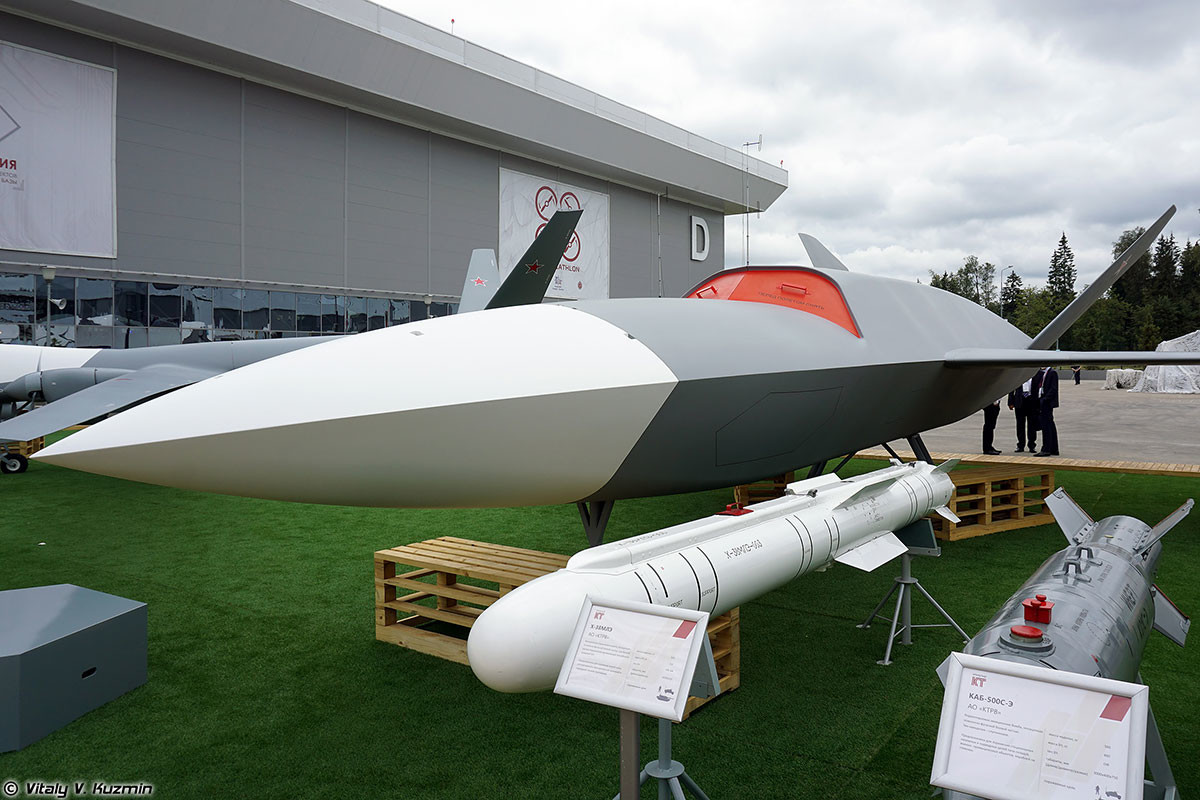 ‘Grom’ might be able to control a squad of up to ten drones during reconnaissance and battle operations in war zones around the world.

“It will be somewhat of a flying hub. A ‘big brain’ with massive unguided bombs and missiles on board transmitting battle information to smaller kamikaze-drones that explode on impact with a target,” says Ivan Konovalov, Development Director of the Foundation for the Promotion of Technologies of the 21st Century.

As the expert notes, the ‘Grom’s electronics and AI will also be able to work and interact with Su-35 fighter jets and Su-57 fifth-generation aircrafts, as well as get updates on the mission.

The UAV will be able to take up to two tons of ammo on board and conduct missions at altitudes of up to 12 km.

The machine has a wingspan of 10 meters and length of 13.8 meters. It will also be able to fly distances of up to 700 km without refuelling.

“It will be created under the ‘stealth’ technology with streamlined geometry of all structural elements as well as with a wide integration of radio-absorbing materials,” Konovalov says.

According to the expert, the appearance of this UAV will allow Russia to join the elite club of powers — owners of MALE class drones (Medium-altitude long-endurance).

“This will be a multifunctional unmanned complex capable of performing long-term reconnaissance missions, as well as taking part in conflicts and airstrikes against heavily armed enemies,” the expert states.

A squad of drones will be used to destroy clusters of enemy armored vehicles. The “big brother” will also have equipment for radio-electronic interference to “blind” enemy defences and protect small-sized drones from enemy air defense attacks. 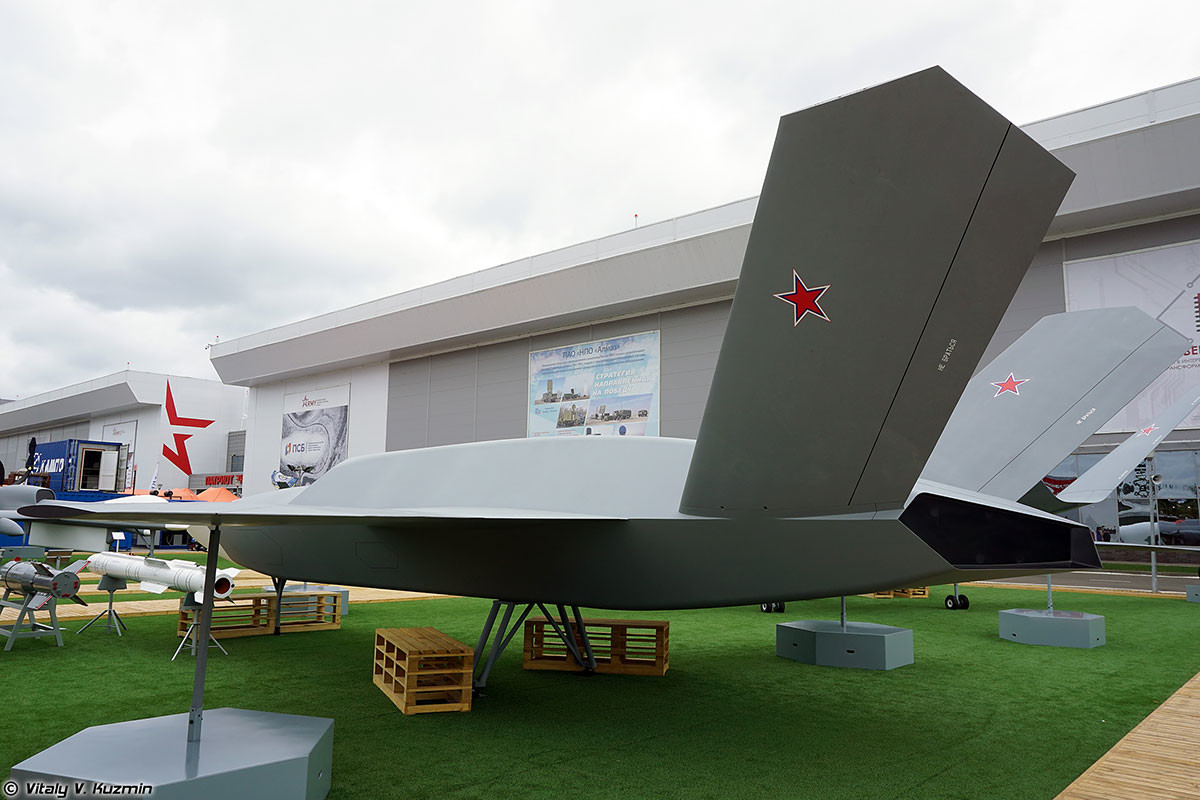 In addition to kamikaze drones, ‘Grom’ will be able to use the X-38 family of supersonic universal modular short-range missiles against ground targets. This ammunition is designed to destroy easily invulnerable targets at distances of 3 to 70 km.

The missiles are equipped with a warhead weighing 250 kg of high-explosive or penetrating type. High accuracy of destruction with these weapons is provided by thermal imaging and semi-active laser guidance systems. The X-38 launches are made at speeds from 54 to 1,620 km/h. At the same time, the flight speed of the munition itself can exceed Mach 2.

‘Thunder’s arsenal will also include guided aerial bombs KAB-250 and KAB-500, designed to defeat a wide range of targets, including enemy infrastructure facilities.