How the Bolsheviks electrified the USSR in record time 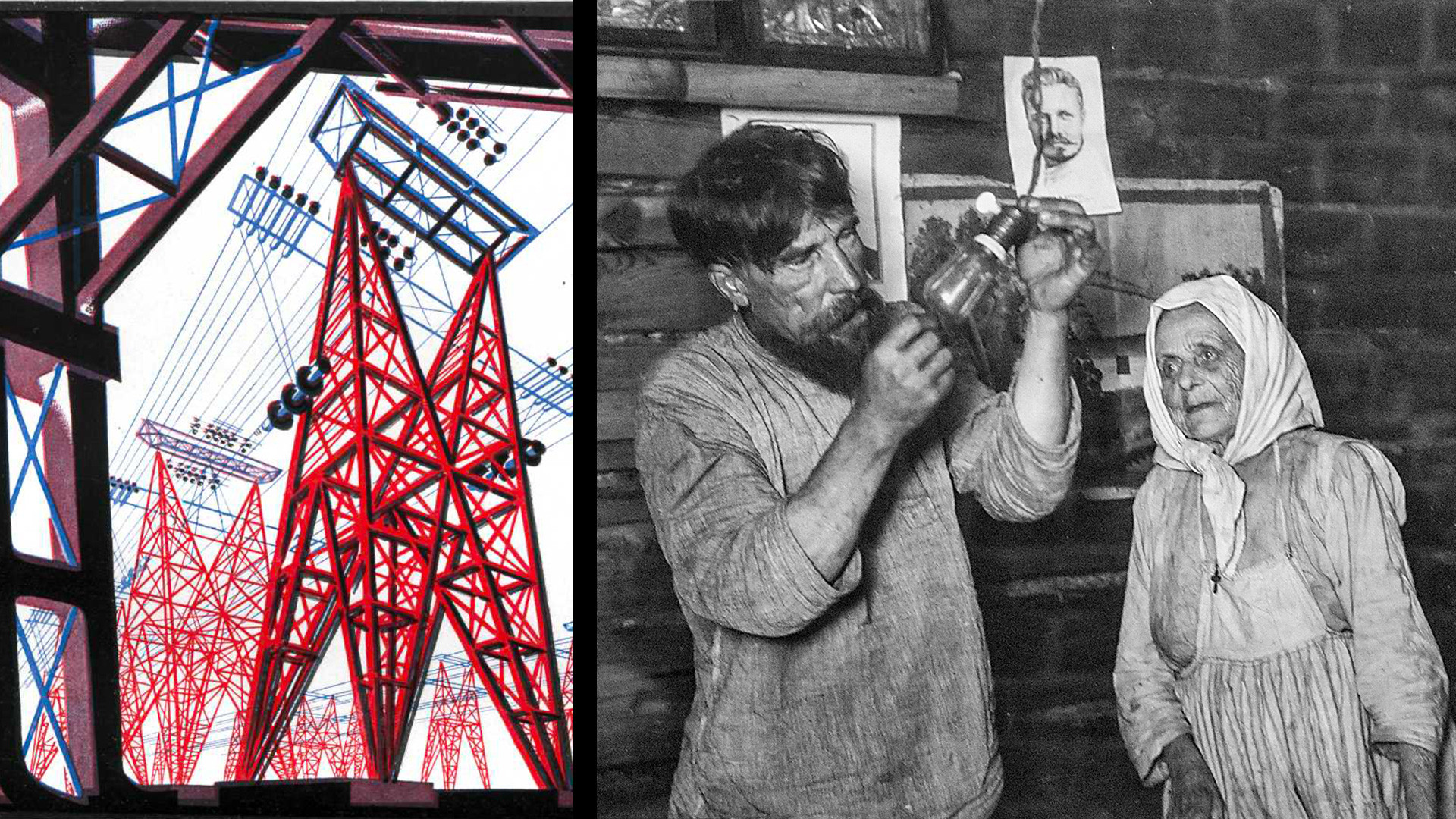 The electrification of Soviet Russia came about unlike anywhere else in the world. Having seized power, the Bolsheviks quickly realized that unless they turned the backward agrarian country into an industrial economy in a matter of years, the very existence of the Soviet state would be in peril. The first thing to do was to supply electricity nationwide – a far from simple task given Russia's size and widespread illiteracy. So the Bolsheviks decided to propagandize it, and pulled off a masterstroke.

The implementation of the plan for Russia’s electrification, approved in 1921, not only led to large-scale industrial development, but created a new deity at whose feet artists, writers, sculptors, architects and filmmakers began to worship. Electrification had a huge impact on both Soviet life and art.

In December 1921, the 9th All-Russian Congress of Soviets approved the plan of the State Commission for Electrification of Russia, which contained a list of power plants to be built over the next 10–15 years. It was a rational, forward-looking project to transform the nation, which, despite its grounding in science, nevertheless contained a hint of the irrational. Early Soviet writings on electrification describe electricity as a kind of life-giving, Frankenstein-esque force, a type of mysterious energy. An essay dedicated to the construction of the Shter power plant stated: "[Electricity is] a powerful invisible force that will flow through the country's veins, through wires, and breathe life into [dead coal mines]... Crops will become taller and greener as a result of this force." This concept of electricity as both a rational and mystical force was important in the early Soviet period. It was a continuation of past ideas formed in the 19th century in philosophy, literature and arts journalism. For the Soviet context, this idea of constant transformation (including the energy one), was also consonant with the idea of permanent revolution and social change. 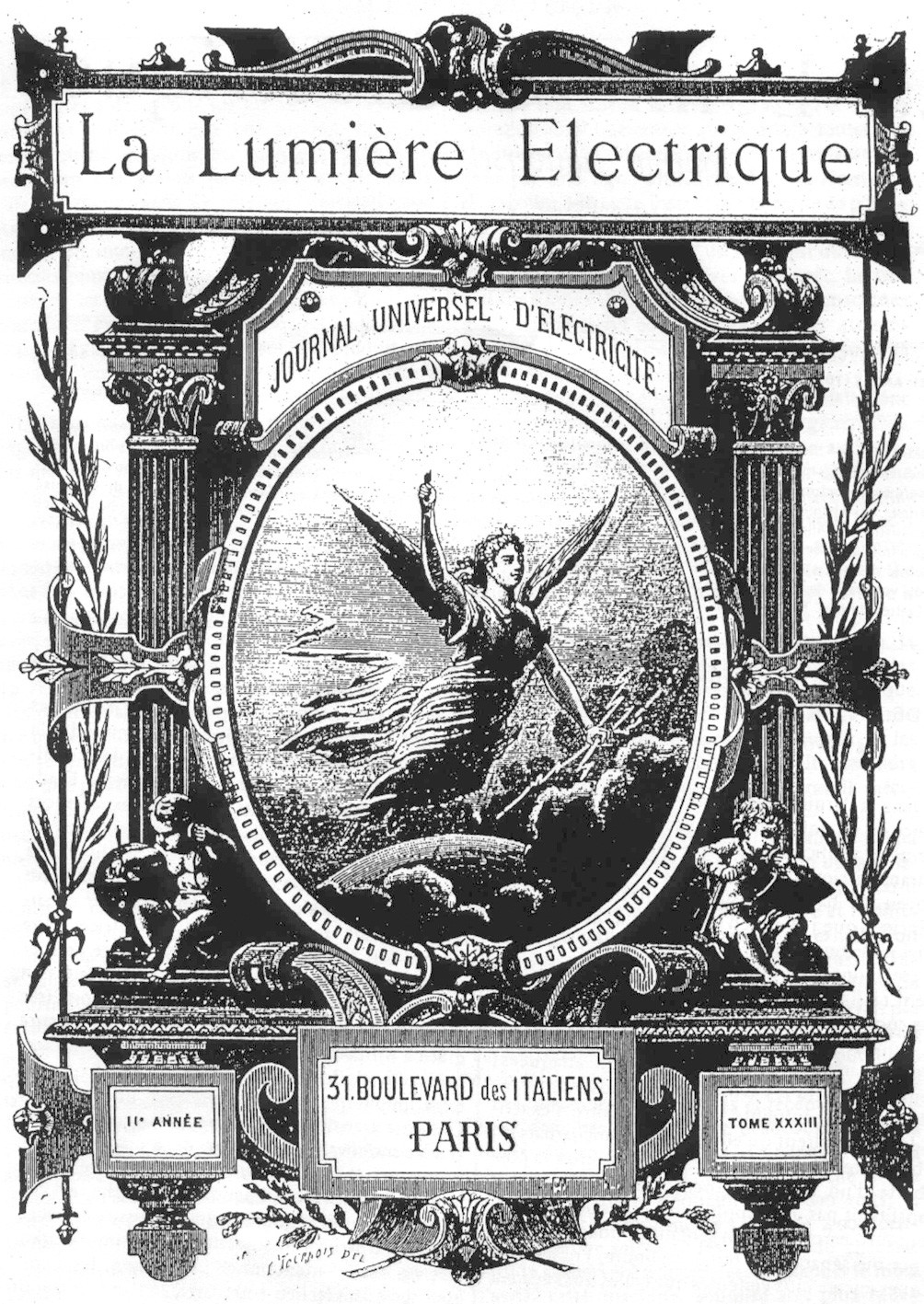 Electric fairy at the cover of Lumière-Electrique magazine, 1887

At the turn of the 20th century, the question "What is electricity?" had no definitive answer. In the 19th century, electricity had been thought of as a liquid, or several liquids, or the movement of particles. The highly ambiguous and mysterious nature of this phenomenon complicated ordinary people’s understanding and acceptance of it. Few wanted to allow such an incomprehensible force into their homes, especially when they feared it could be dangerous. Symbolically, this sense of an unknown yet vital energy found expression in the invention of the “electric fairy”, which often appeared in pre-revolutionary advertising materials. 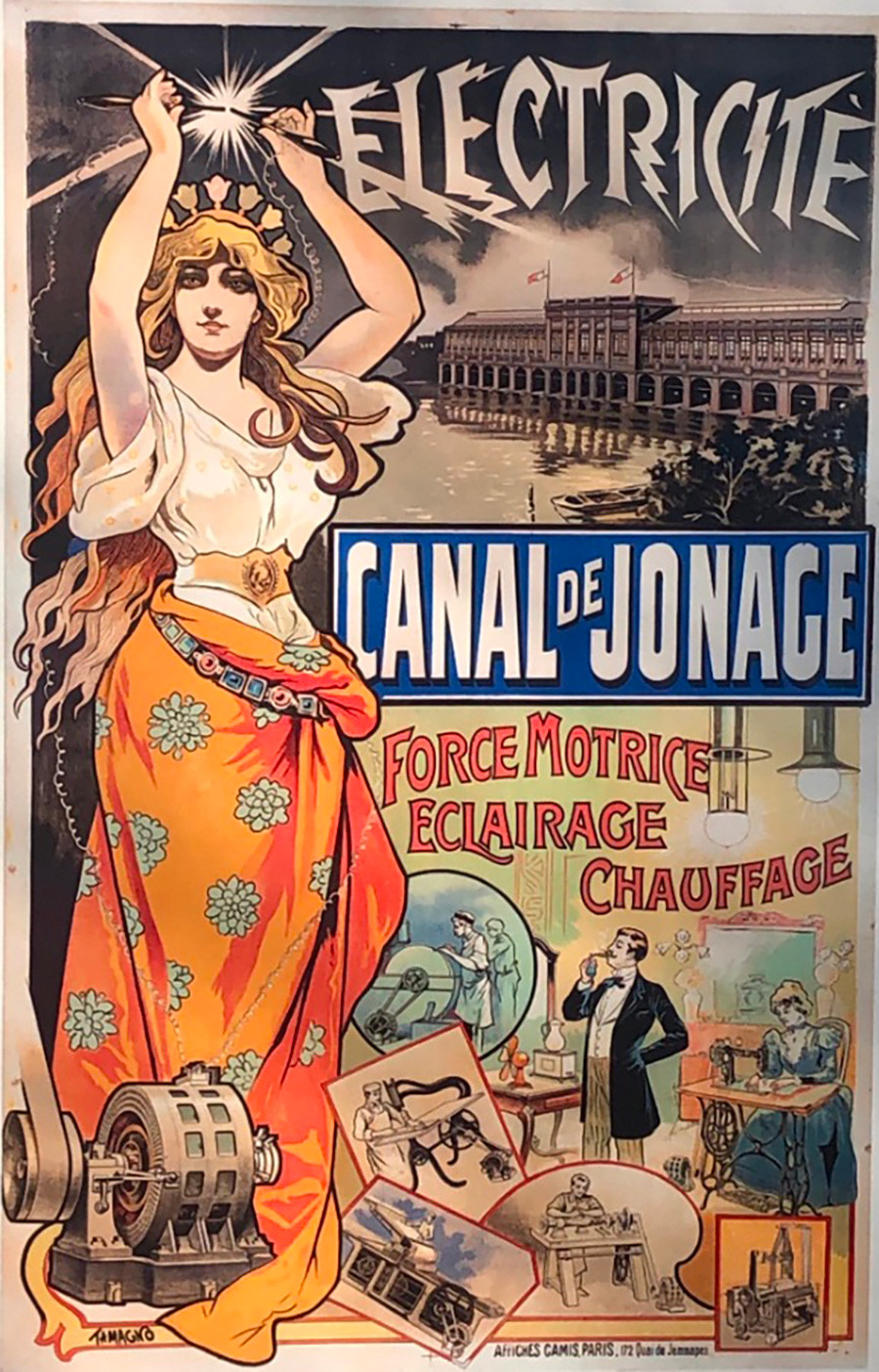 Such images anthropomorphized this unfathomable force and presented it in an accessible way – most often as a scantily clad young woman with her right hand raised, holding a new artificial light source, with a dynamo at her feet. Such images circulated in Europe, America and pre-revolutionary Russia. 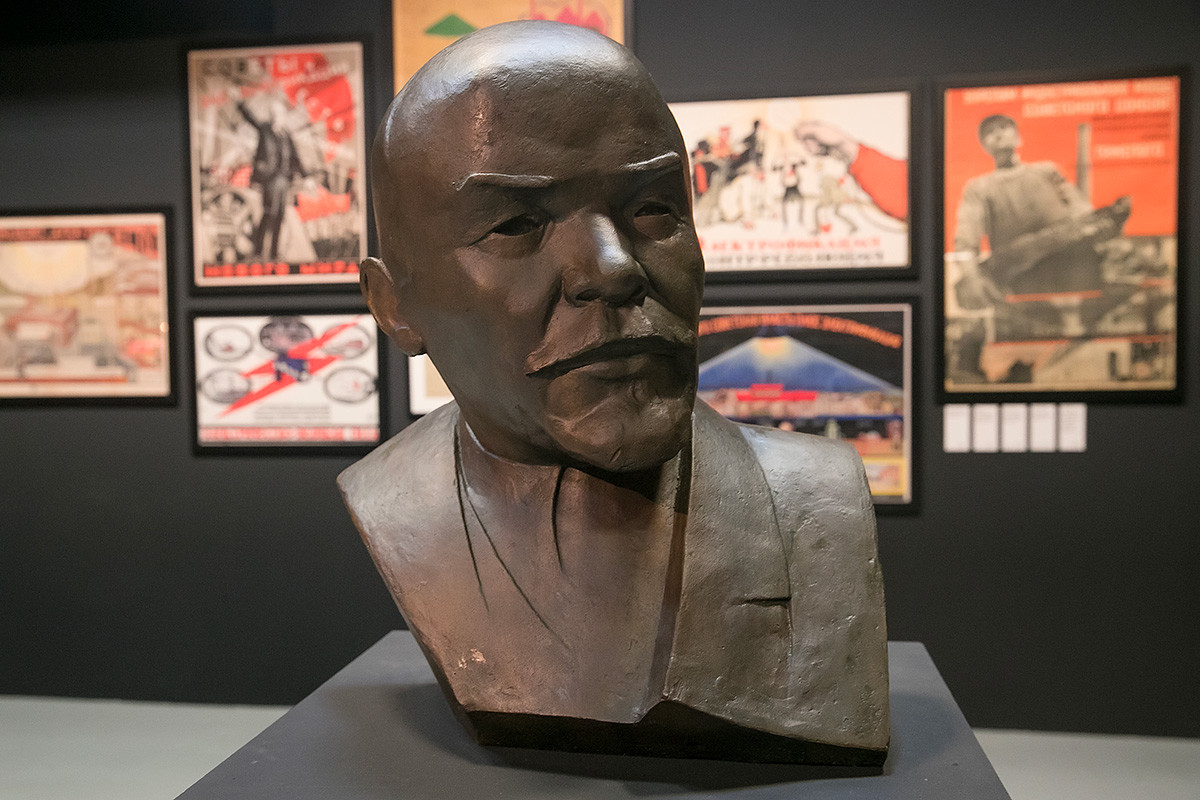 The Bolsheviks reconceived the image of the "electric fairy", turning the leader of the world proletariat, Vladimir Ilyich Lenin, into a demiurge and a symbol of electrification. The electric light that now lit up every home became known as “Ilyich's lamp”, which brought enlightenment (quite literally) and a new way of life to the masses. Incidentally, the expression “Ilyich's lamp” was circulated in newspapers after Lenin attended, in 1920, the opening of the country's first rural power plant in Kashin, Tver Region, built on the initiative of local peasants. Later, the myth of Lenin as the bringer of light was replicated in films, posters and books. Lenin didn’t just turn on the lights, he was identified, Christ-like, with light itself. Lenin was electricity. 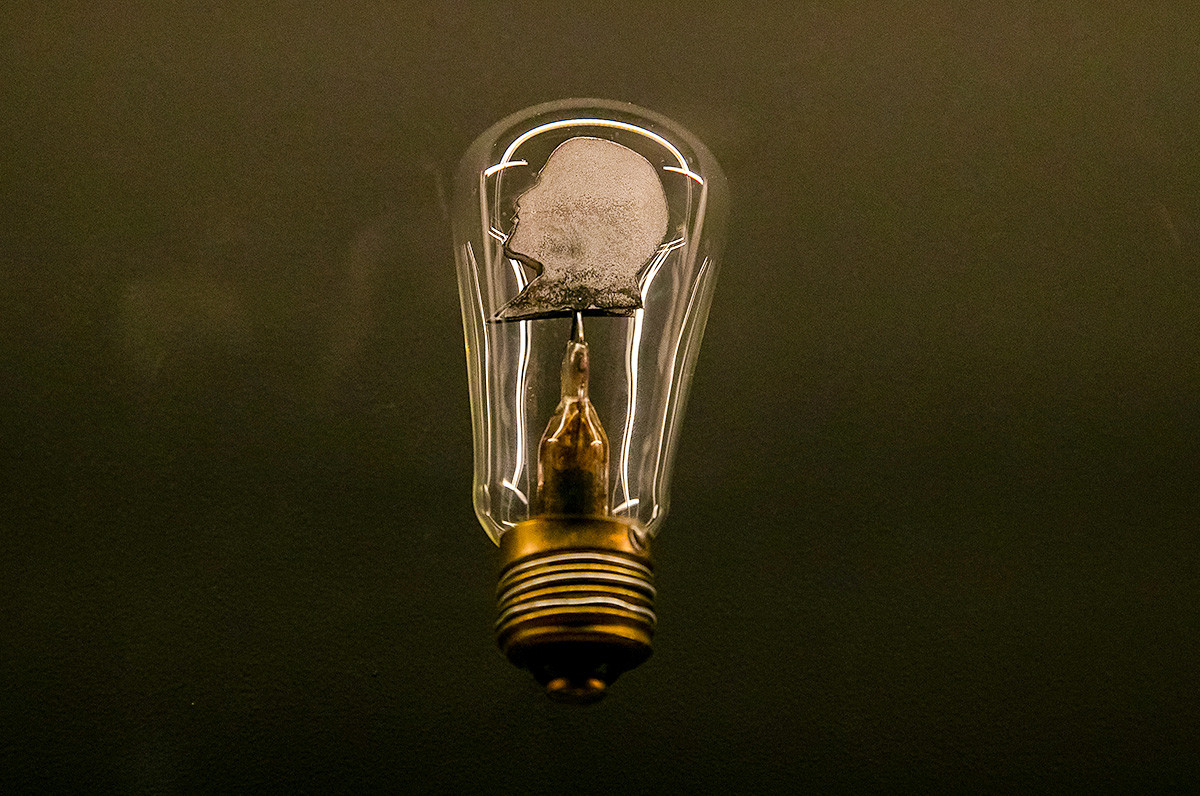 A lamp with a spiral in the form of Lenin's head, 1950s. From the collection of the Museum of Moscow

Lenin as the "conductor of electricity" was also found in children's books. A new visual language and new techniques for representing electricity were created not only for kids’ literature, but for films, posters, painting, sculpture and architecture. 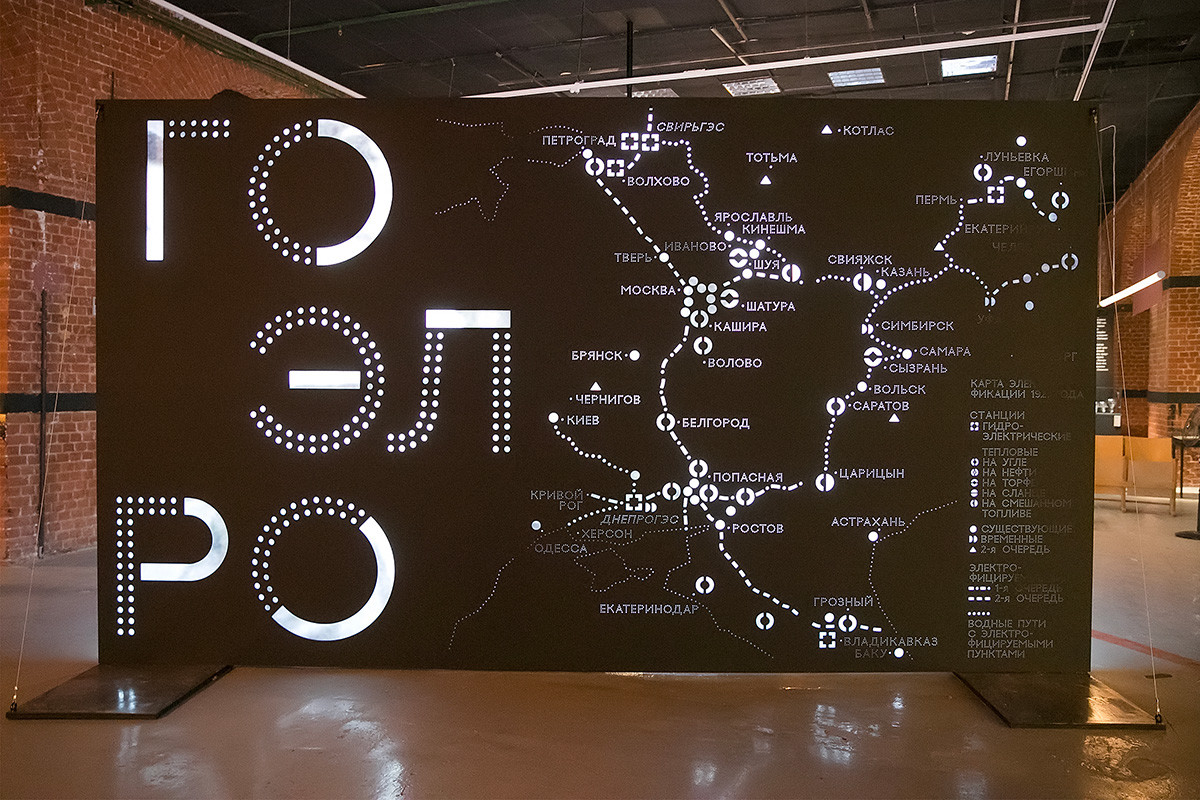 For Soviet ideologists and propagandists, an important feature of electrification was its connection to a central source. The supply network, which spread to all distant corners of the country, was centrally managed, that is, it linked the provinces to the center. This centralization was a core element in the formation of the Land of the Soviets. It was this that would surely make it possible to run the entire national economy from the center. And whereas the visible results of centralization date from the 1930s, when the first power control stations began to appear, the idea itself was already circulating in the 1920s. 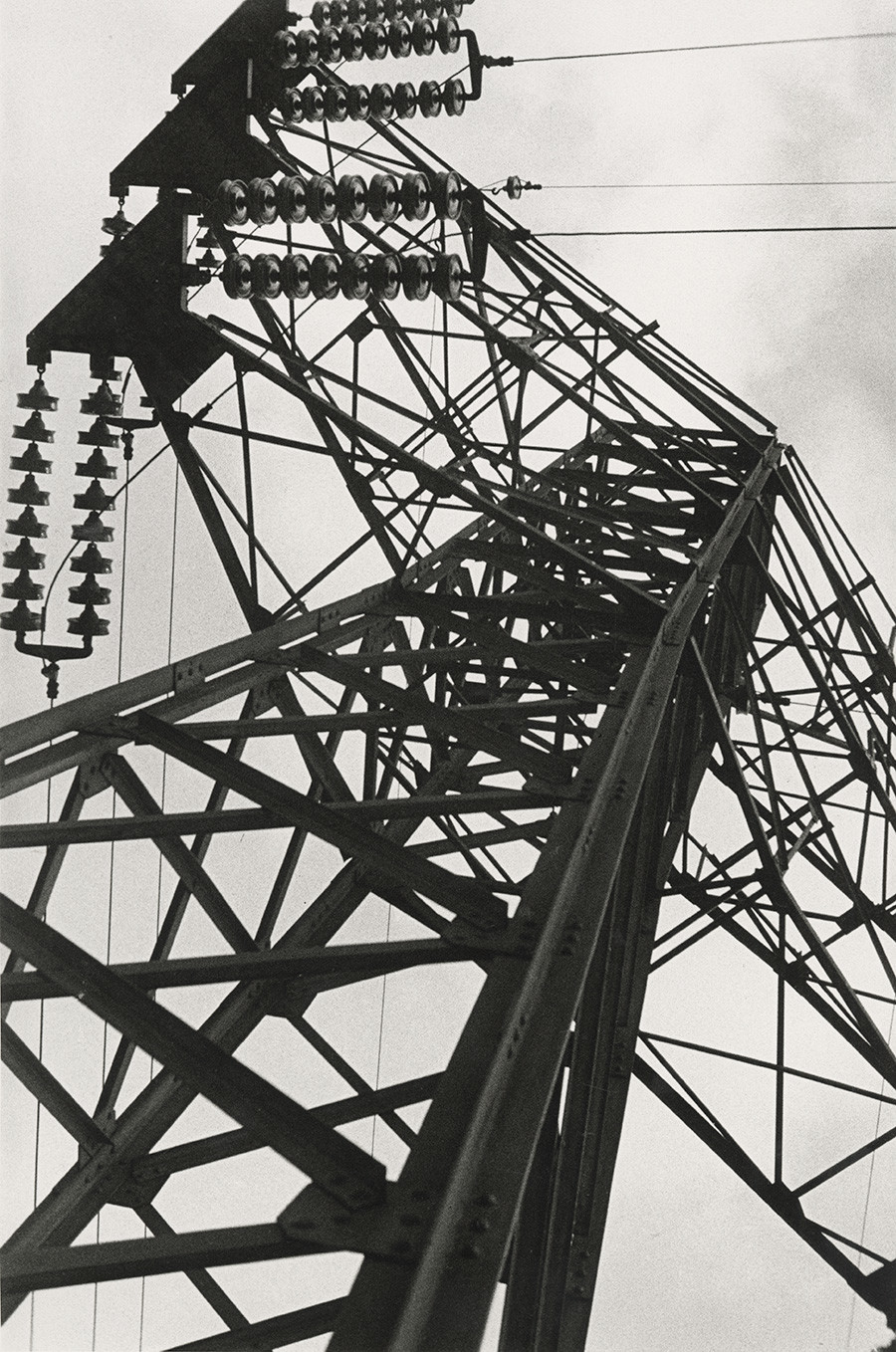 It was then that the power grid became a metaphor for understanding the new Soviet space, which was radically different to that of Tsarist Russia. This opposition was frequently visualized, for example, in cinema, where the previous space was depicted as formless, torn into separate, unconnected parts, while in the new one even the farthest-flung corner was connected to the center. The power grid became the tool that enabled remote villages to feel on a par with the big cities. 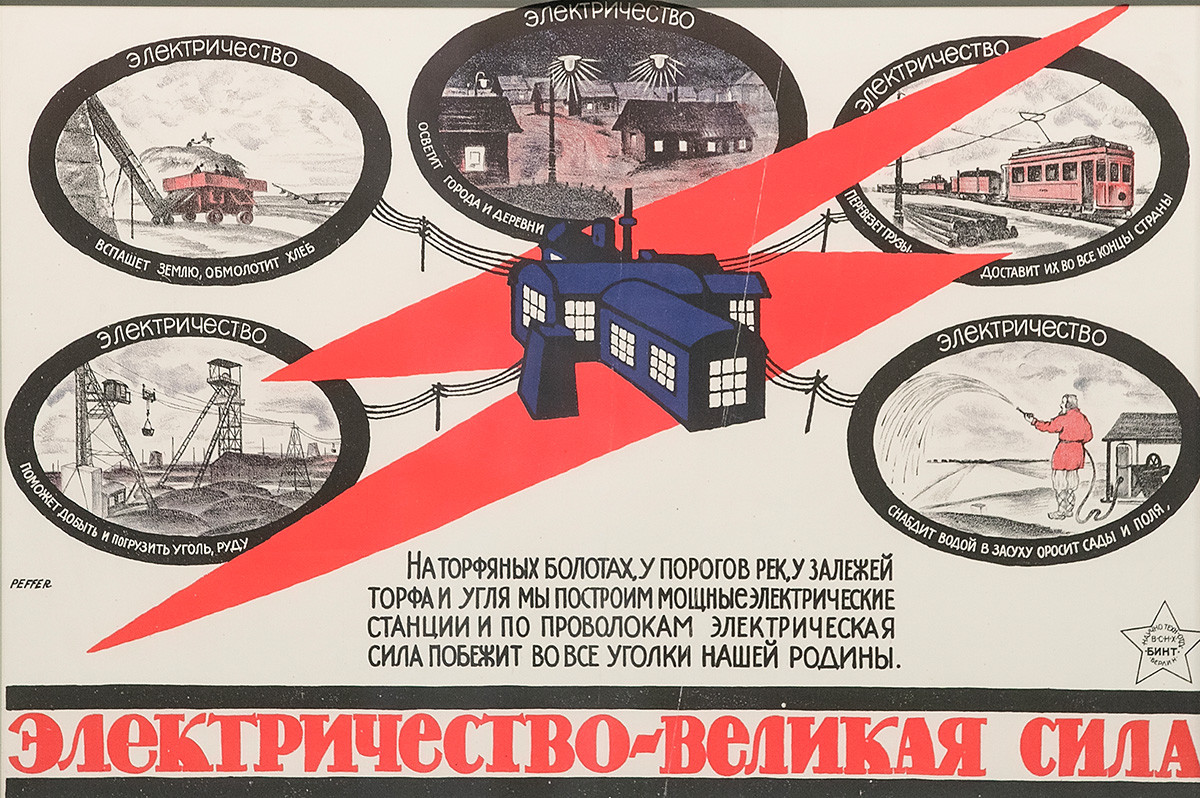 Poster "Electricity is a Great Power," 1920s. From the collection of the Russian State Library

In 1931, the philosopher and science historian Boris Kuznetsov published a pamphlet entitled "The Unified High-Voltage Grid of the USSR", in which he described why the power grid was so important and how it conformed with the ideas of dialectical materialism and the tasks of communism and socialism. 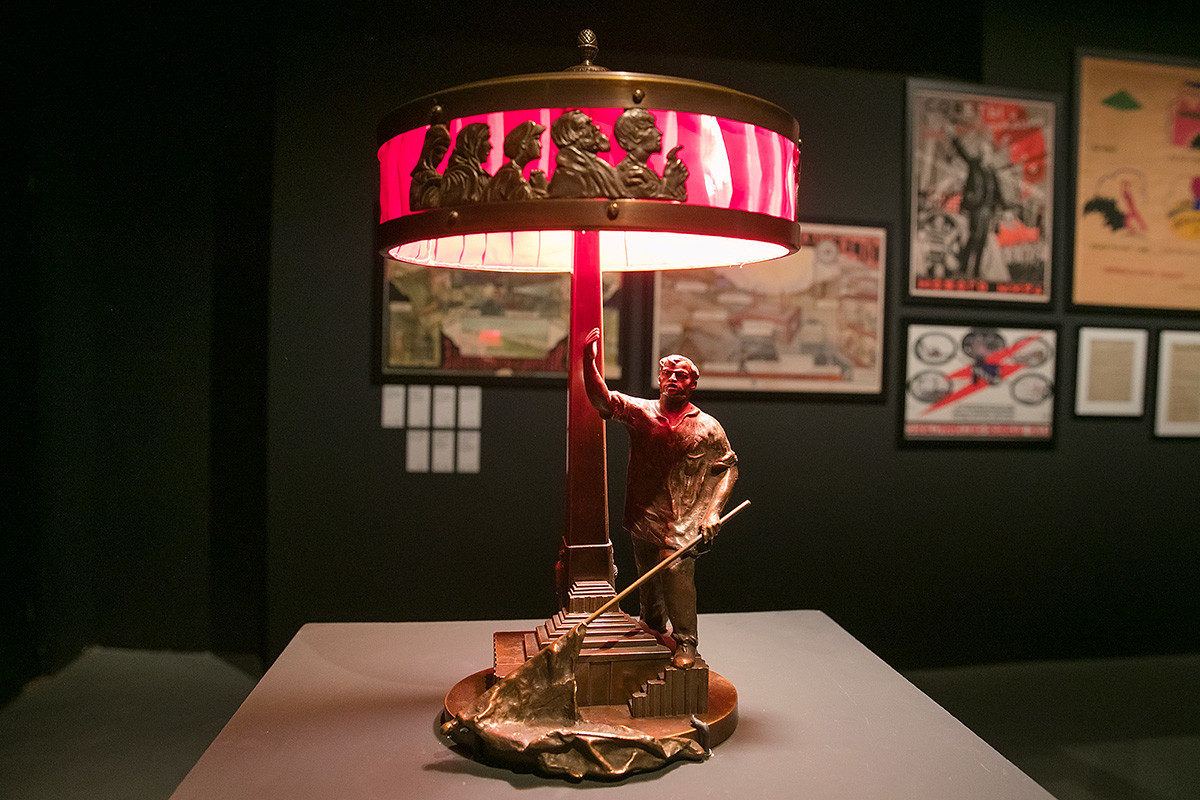 Table lamp with a figure of a standard-bearer, 1920s-1930s. From the collection of Mikhail Vilkin

Although many city apartments in the 1920s and 30s had electrical light and appliances, it was still too early to talk of mass electrification, which was still on the drawing board. The electrification of everyday life was promoted as a side benefit to the main task of electrifying production. At the same time, each connected electrical device was intended to save kerosene, a critical fuel for the economy. Additionally, it was assumed that electrification would deliver a crushing blow to the remnants of the past: out with the antediluvian samovar and smoke-belching primus stove, in with the clean and comfortable life of the future. One Soviet invention that represents the new rational living is the utopian electric cooker with alarm clock. When the alarm clock sounded, the water heater in the kitchen would turn on automatically, so when the worker came in for breakfast, hot coffee and boiled eggs were already waiting. 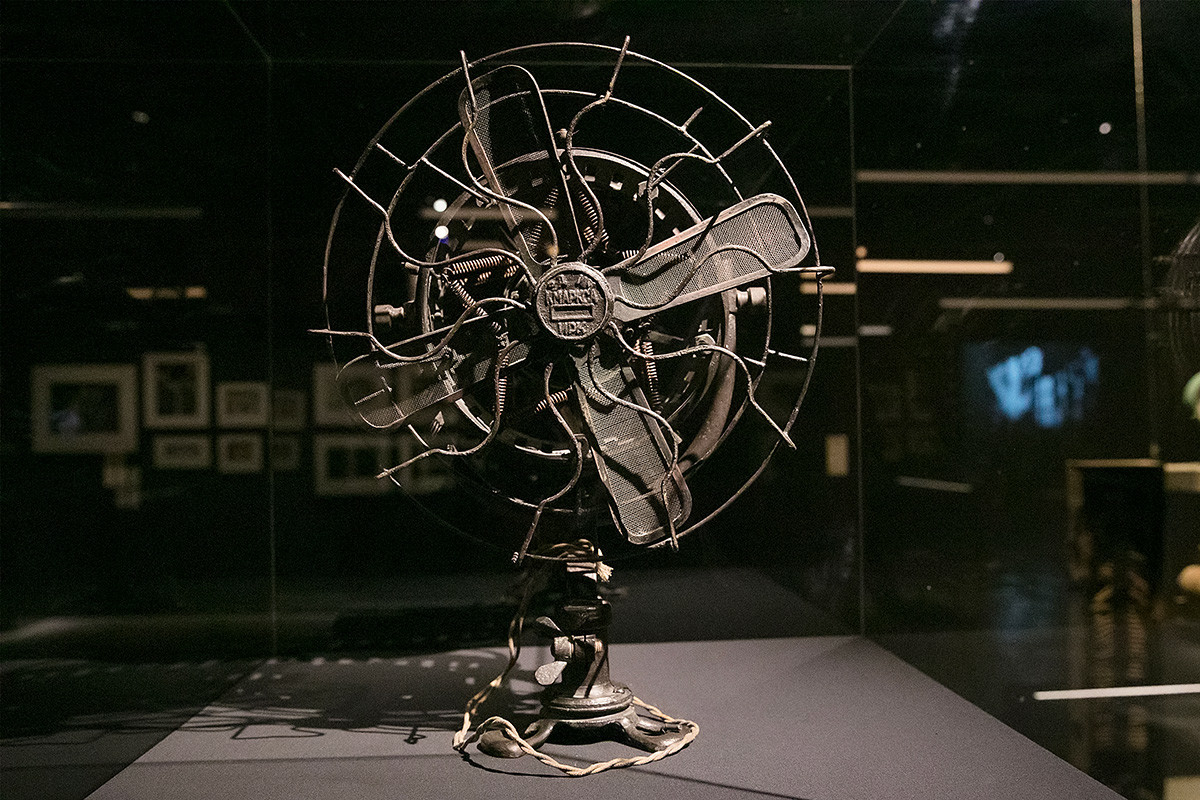 Table fan, 1930s. From the collection of Sergey Bobovnikov

One of the tasks facing Soviet engineers back then was how to use electrification to reshape the life of Soviet women, freeing them from kitchen slavery and providing more time for social work. In 1937, the magazine Obschestvennitsa (Community Woman) published a long article from the first-person perspective of a housewife complaining about how tiresome her life is: cooking, then washing, then cleaning, then cooking again, and so on every day of the week. She tells her husband about her difficulties, to which he replies that he would be happy to help. And so there appears in the kitchen an electric stove and an electric motor, drastically improving the woman’s life. This is one of the first approaches to the scientific management of daily life in the USSR.

The author, Natalia Nikiforova, is a culturologist, Candidate of Sciences (PhD) and postdoctoral researcher at the Poletayev Institute for Theoretical and Historical Studies in the Humanities, Higher School of Economics.

The major exhibition"Electrification. The 100th anniversary of the State Commission for Electrification of Russia (GOELPRO) plan" runs at the Museum of Moscow until Oct. 24. Russia Beyond would like to thank the museum for its assistance in preparing this article.