The past on wheels: Moscow's old public transport (PHOTOS) 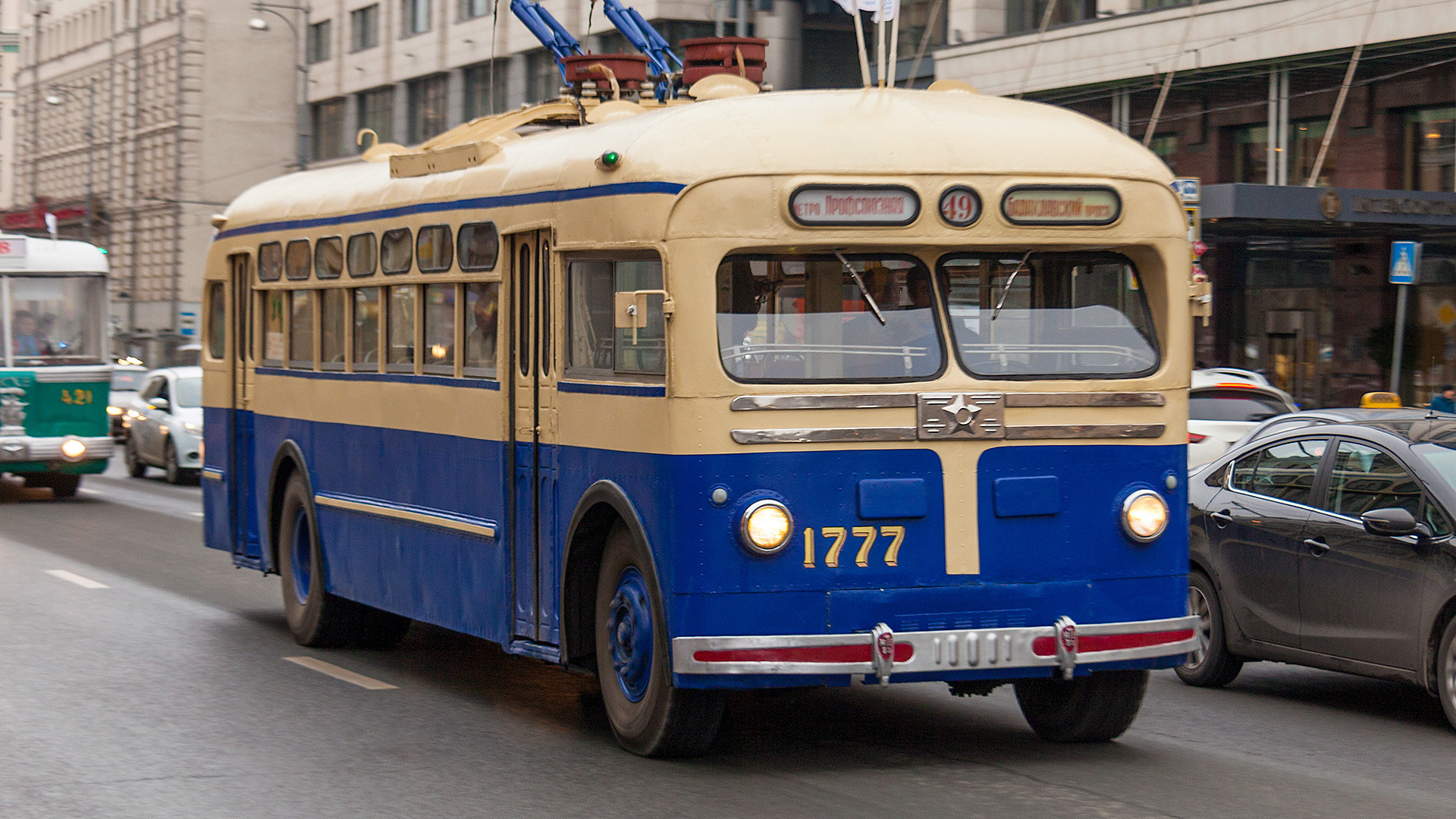 Pavel Kazachkov (CC BY-SA 4.0)
What were old models of Moscow trams, buses and trolleybuses like? 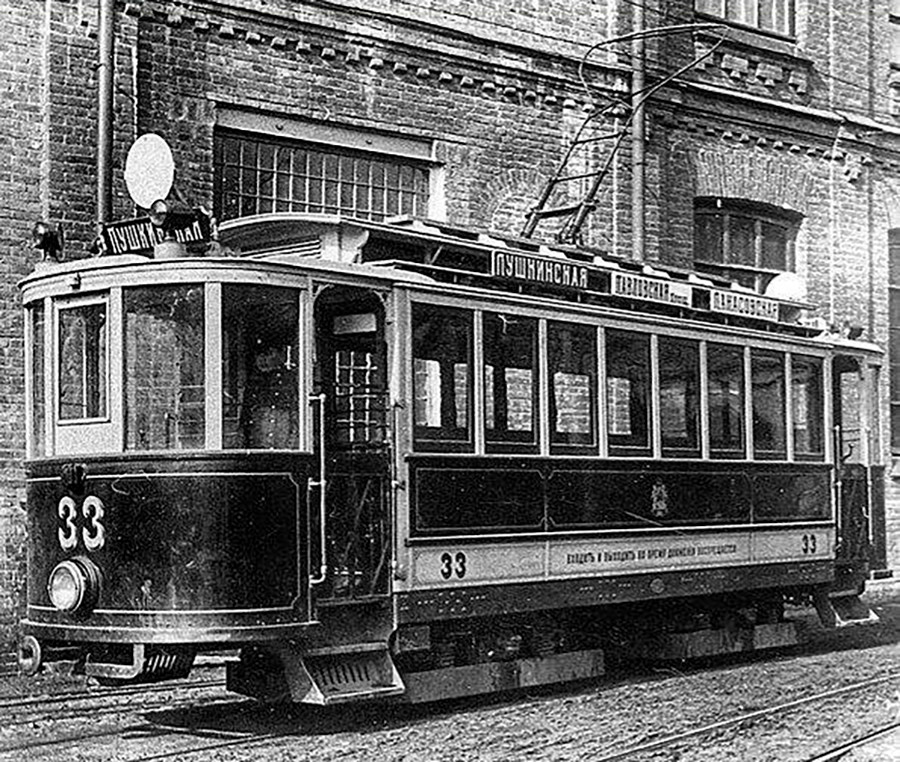 Electric trams appeared in Moscow in 1899, but the most popular of the first models was created in 1908. It was the model ‘F’ (‘Fonarny’, “The one with a lantern”), a motor carriage produced in St. Petersburg. The name comes from a special build-up with glass units on the roof. It served to let additional light from the street inside the carriage and was commonly called a ‘lantern’. The chassis of the ‘F’ was wooden with a steel coating. The carriage had no doors and passengers often hopped on and off while it was going through turns at minimum speed. The ‘F’ also operated with a motor engine with several attached modifications and was only taken out of service in Moscow in the 1950s. 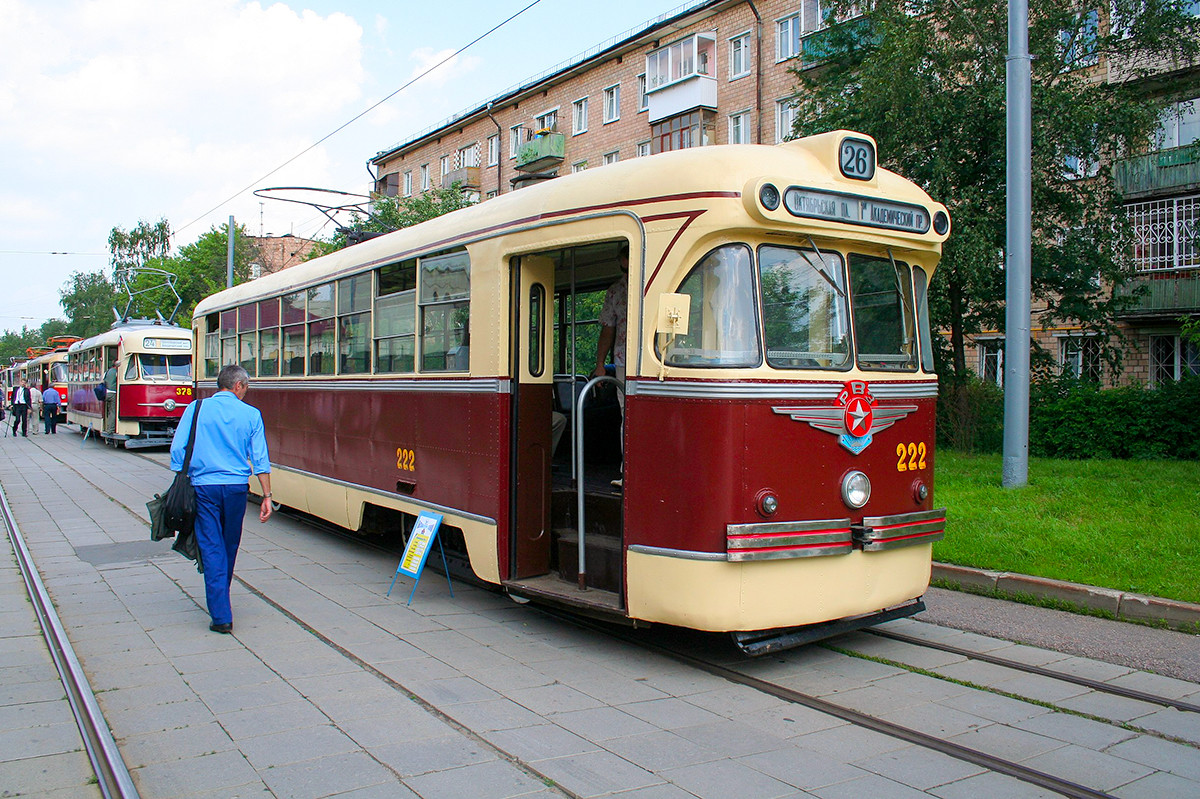 The ‘RVZ-6’ was a special case: This successful model had spread all over the USSR and was in use for decades, but it was still considered really exotic in Moscow. The reason was that the capital had chosen the ‘Tatra’ trams (see below) instead of this one. The ‘RVZ-6’ was designed in Riga in the Soviet Republic of Latvia. From 1960, its mass production had continued for practically 30 years - the Latvian engineers did everything to update the construction. The ‘RVZ-6’ had a light body made of aluminium sheets riveted together. Also, it had a driving system with pedals, which was quite unusual for trams. As Moscow underestimated this model, it was only used there in 1960-1966 and then, all eight carriages were given to Tashkent in the Soviet Republic of Uzbekistan. 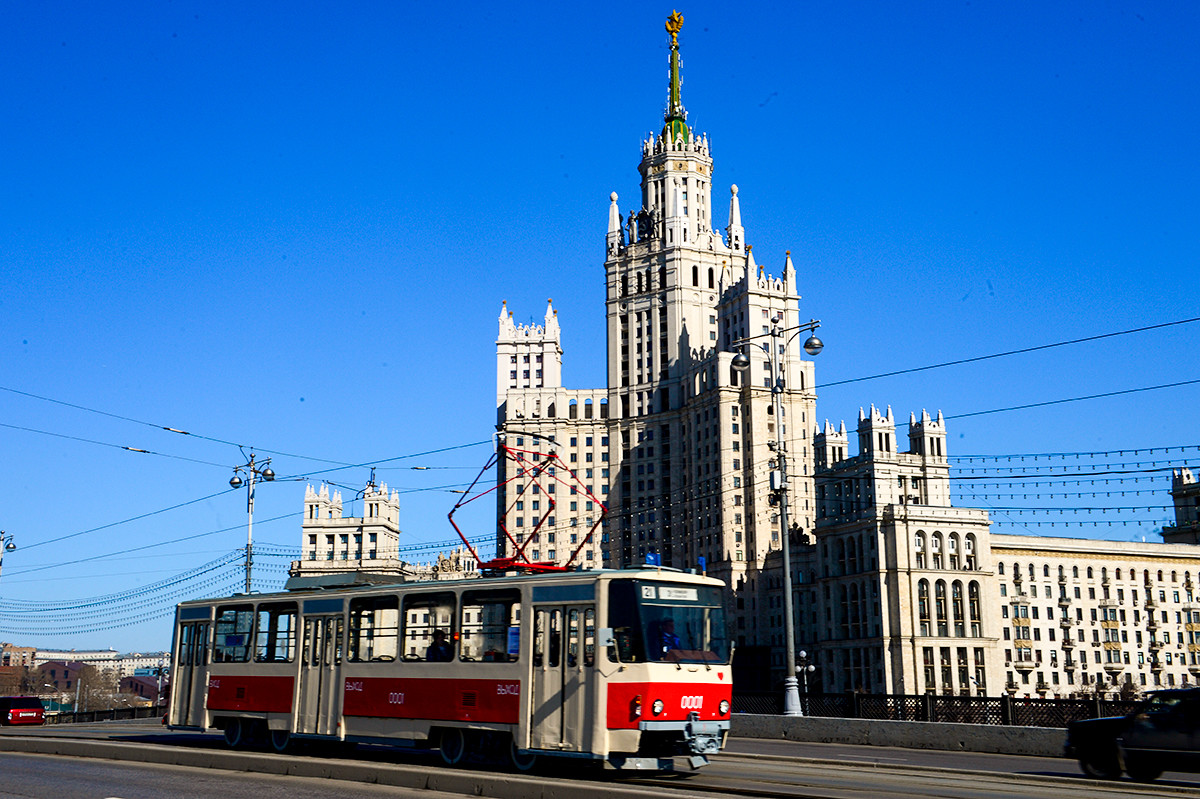 The ‘Tatra’ tram was inspired by a U.S. model and produced from the 1950s in Czechoslovakia under a license. A modified ‘Tatra T2’ first appeared in Moscow in 1959. It was the beginning of a new era in the history of Moscow trams. It was much more convenient than any other Soviet model: the driver had a comfortable seat and the carriage was equipped with resilient wheels, instead of full-metal ones - the ‘Tatra T2’ passed through the streets without making a loud noise. All the carriages of this modification also had an improved winter heating system. On top of that, the recognizable design of the model didn’t resemble any other trams. The ‘Tatra T2’ was taken out of service in 1981 and replaced by the next generation - the ‘Tatra T3’, which wasn’t less successful. 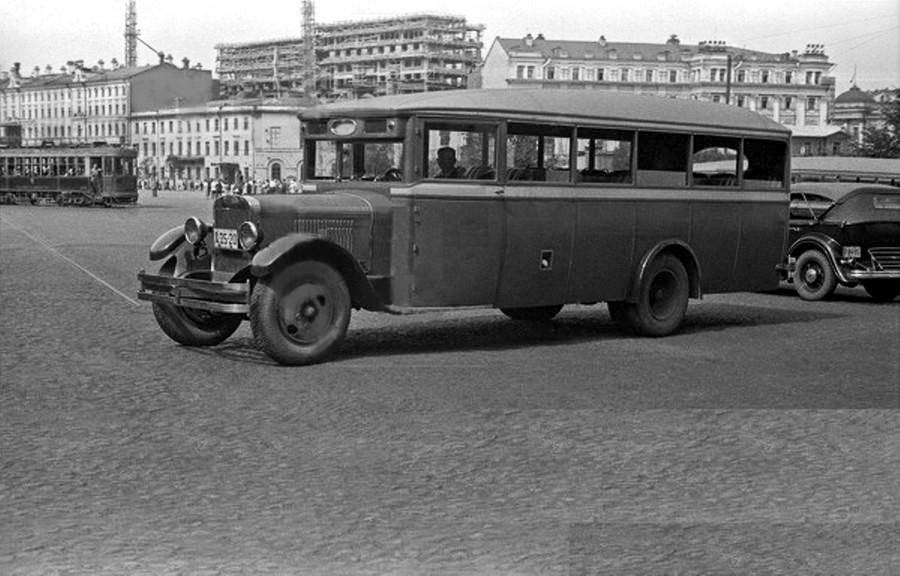 The first buses that appeared in Moscow in 1922-1924 were imported from England, but Soviet engineers quickly designed a local model. This was the ‘AMO-4’, named after the AMO plant (“Automobile Society of Moscow”). The name of the model also actually stands for bus chassis and had two body modifications. The second had a fourth door at the back, so it could be turned into an ambulance. The chassis was improved, too: It was made of boards instead of beams and became more flexible, so the bumpy Moscow pavings didn’t wear it out too fast. 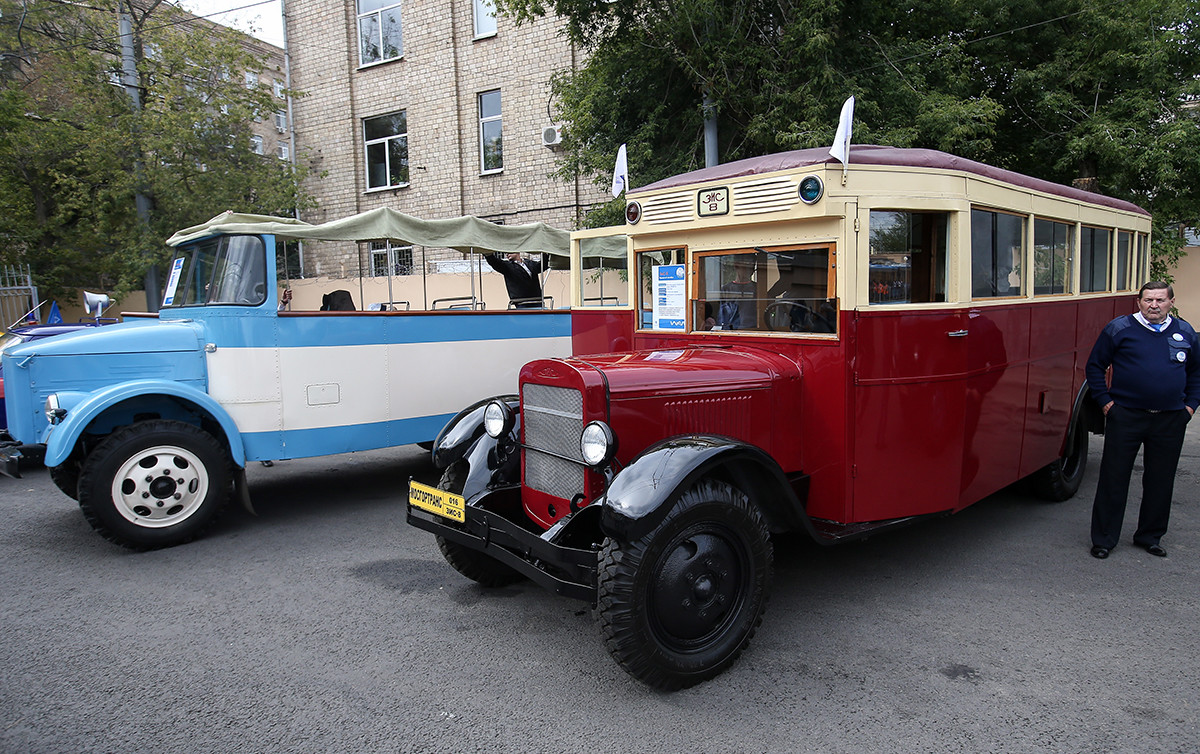 In the 1930s, the AMO plant was renamed in honor of Iosif Stalin, so its new common abbreviation was ZIS (‘Zavod imeni Stalina’, “Plant named after Stalin”). After this, engineers designed a new bus called ‘ZIS-8’. It was based on an American bus model, which was significantly altered: the construction was made simpler and the front brakes were made more reliable. Like the ‘AMO-4’, the ‘ZIS-8’ had a small window to display the route number above the windscreen. At the sides of the window there were two lamps showing the color code of the route to make it recognizable from a distance - an idea borrowed from the tram system. The ‘ZIS-8’ had turned out to be convenient and easy to produce, so it was used in other cities of the USSR and even made for export. ZIS then began to design many bus modifications. 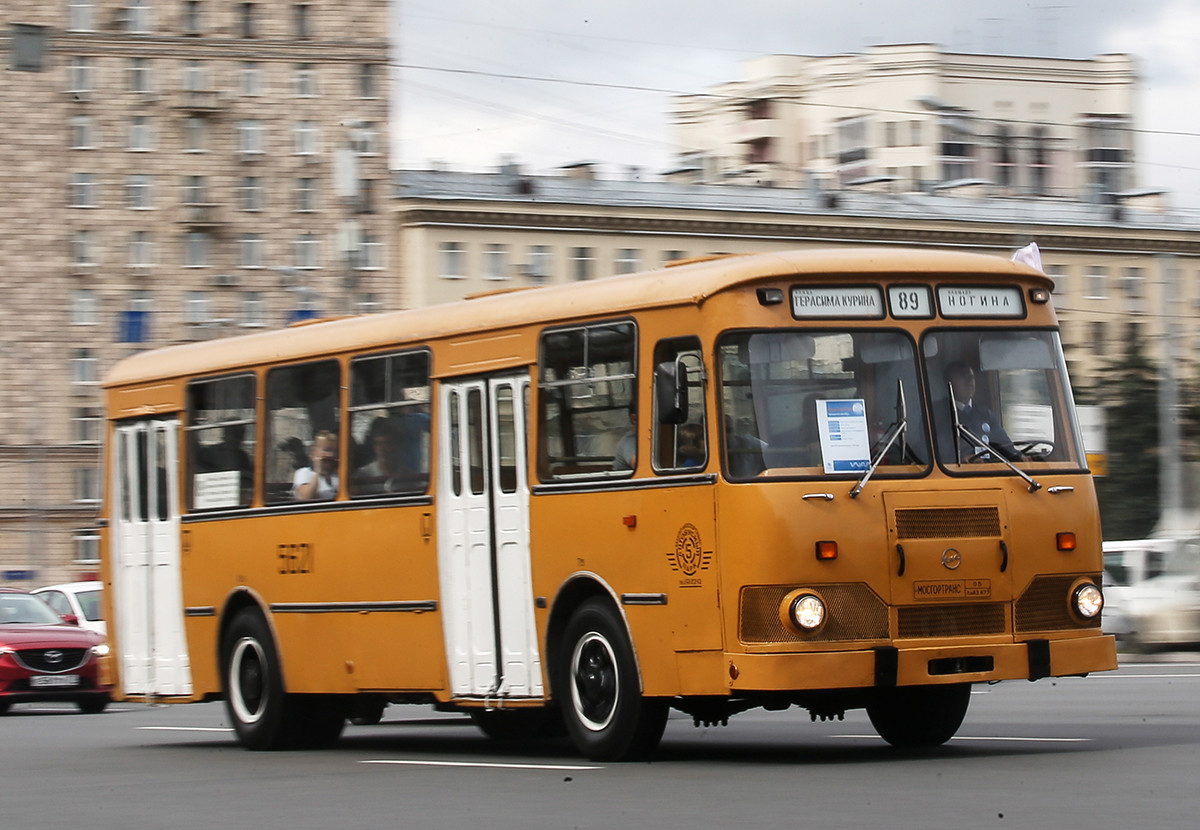 One of the next greatest hits among Moscow buses was first designed in 1962 at a plant in Likino-Dulyovo, Moscow Region. It was called ‘LiAZ-677’ and was actually used all over the USSR. Appearing in 1967 in Moscow for the first time, the ‘LiAZ-677’ was in operation until the 2000s. This bus had a flexible suspended span based on pneumo cylinders, so people started calling the ‘LiAZ-677’ a ‘lunokhod’ (“lunar rover”). The motor was placed in the front part of the chassis and the exhaust gas pipe went under the floor - this construction solution also heated the compartment. However, as this system got old, it started filling the bus with the smell of the exhaust gas. The ‘LiAZ-677’ is also remembered for its shaky motion and specific sound of its worn parts, which resembled the tinkling of empty bottles. 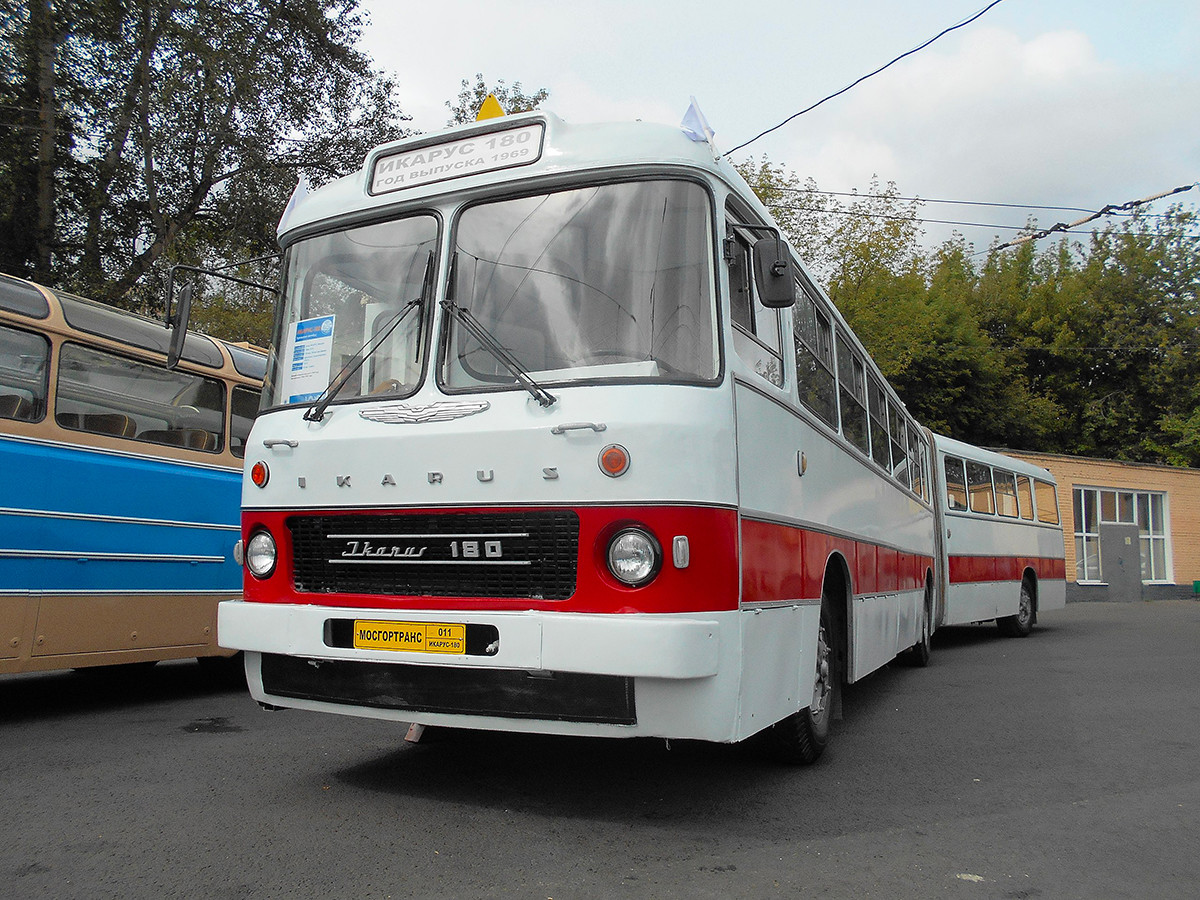 The ‘Ikarus’ buses from Hungary were very popular in the USSR. They started appearing at the end of the 1960s, but only the biggest models were operating in Moscow. One of them was the ‘Ikarus-180’ - the first stretch bus in the Soviet Union. It just had 37 seats, but could carry 169 passengers in total, thanks to its two-section construction. The center of the ‘Ikarus-180’ made the Soviets nickname this model ‘garmoshka’ (“accordion”) or a “vacuum cleaner”. Also, its diesel engine was a sensation on the back of other Soviet buses that had petrol fuel-hungry motors. Later, the ‘Ikarus-180’ became the basis for the improved ‘Ikarus-280’ model. 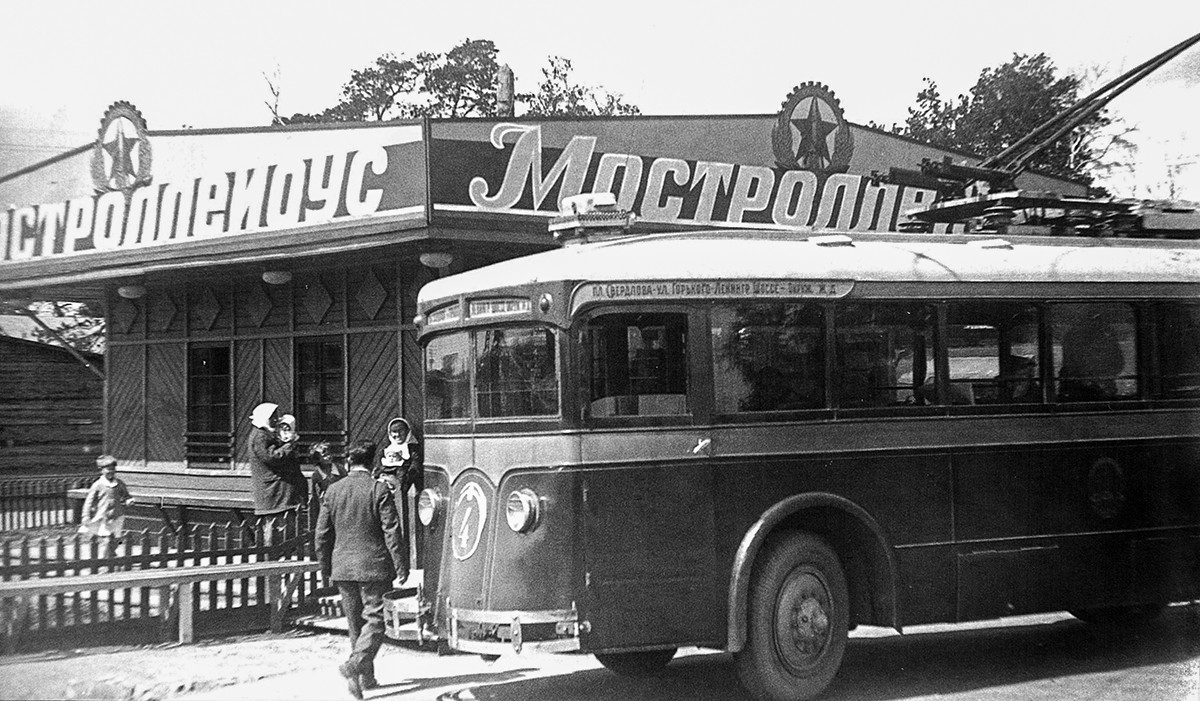 Moscow saw its first trolleybuses in 1933. The model was called ‘LK’ after Lazar Kaganovich, who was the man behind the idea to equip Moscow with electric transport. The first trolleybuse of the capital had a wooden chassis covered with metal. It had two doors that opened manually by the driver and the bus conductor. The ‘LK’ was comfortable for passengers: there were padded seats with heaters and baggage nets. At the same time, the driver’s cab had no heater and the wooden chassis made terrible creaks during motion. In any case, this new type of transport gained a lot of popularity over the years. 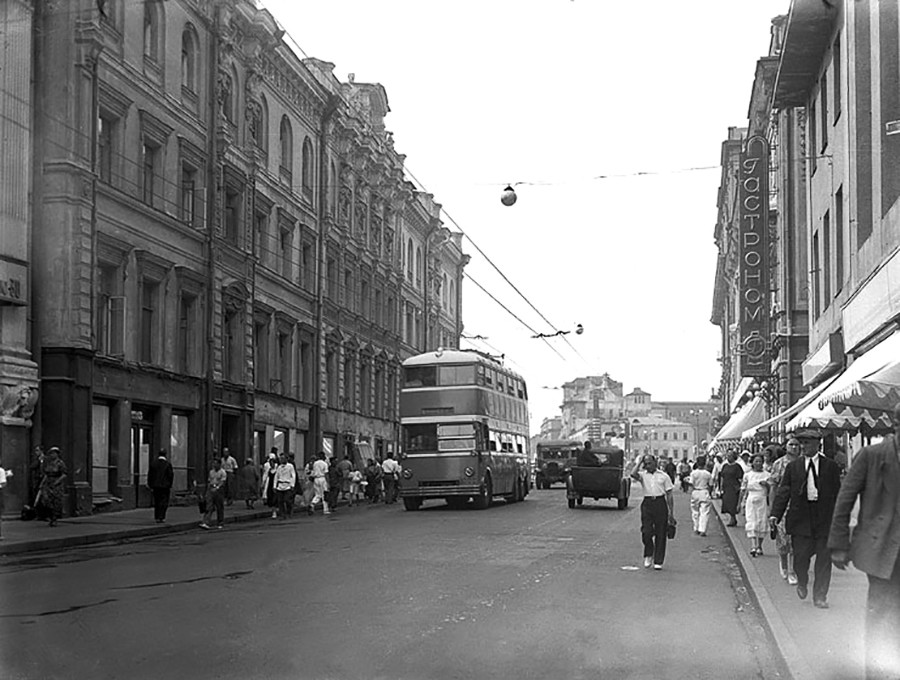 Appearing in 1939, the ‘YaTB-3’ was the most unusual of Moscow’s trolleybus models, as it was a double-decker. It was the Soviet equivalent of an English model bought for the capital of the USSR in 1937. It fit 100 people inside, but wasn’t easy to operate. All trolleybus cables had to be raised a meter higher and the trolley poles (power collectors) of the usual models often lowered. The ‘YaTB-3’ was uncomfortable for tall passengers, because the ceilings of both decks were very low. Also, it was only possible to ride the second deck sitting down - extra standing passengers could alter the center of gravity, which threatened the steadiness of the bus. The number of these trolleybuses slowly declined until 1953, when they were finally taken out of service for good. 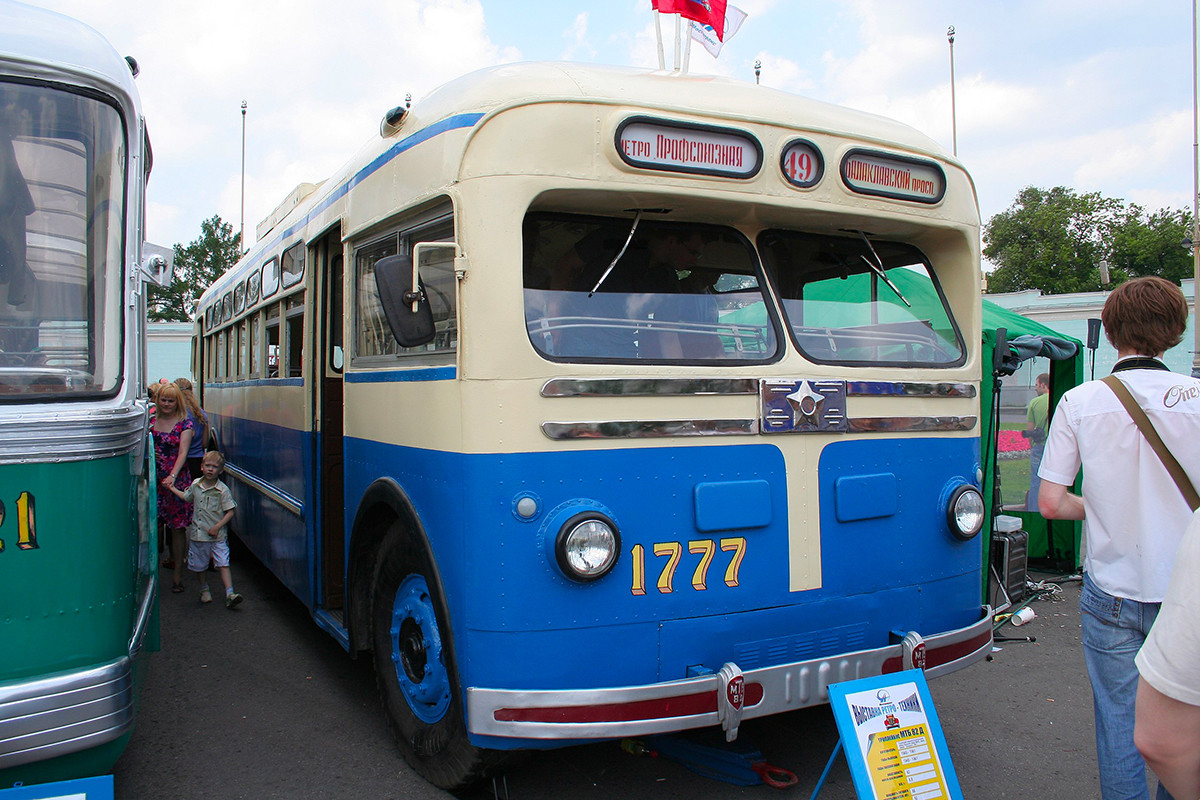 The ‘MTB-82’ first appeared in Moscow in 1946. It was quite different from previous models. For example, it had a universal chassis that could be used as a trolleybus, tram or bus. Its chassis was made of aluminium and covered with the same metal, so it didn’t make any creaks and was considerably lighter in weight. The doors didn’t have to be opened manually, as they had the pneumatic drive. Additionally, all the parts could be repaired easily. The ‘MTB-82’ could carry 100 people like the ‘YaTB-3’ and it also had problems with its size: it was wider than all the other trolleybuses, so the drivers often hit passing vehicles and lampposts.This is why the production of the ‘MTB-82’ was eventually stopped in 1961, but it was in operation until 1972, when it finally was taken out of service. In fact, nowadays, any trolleybus is a part of history - in 2020, Moscow stopped using this type of public transport and, in September of that year, a museum route was opened.