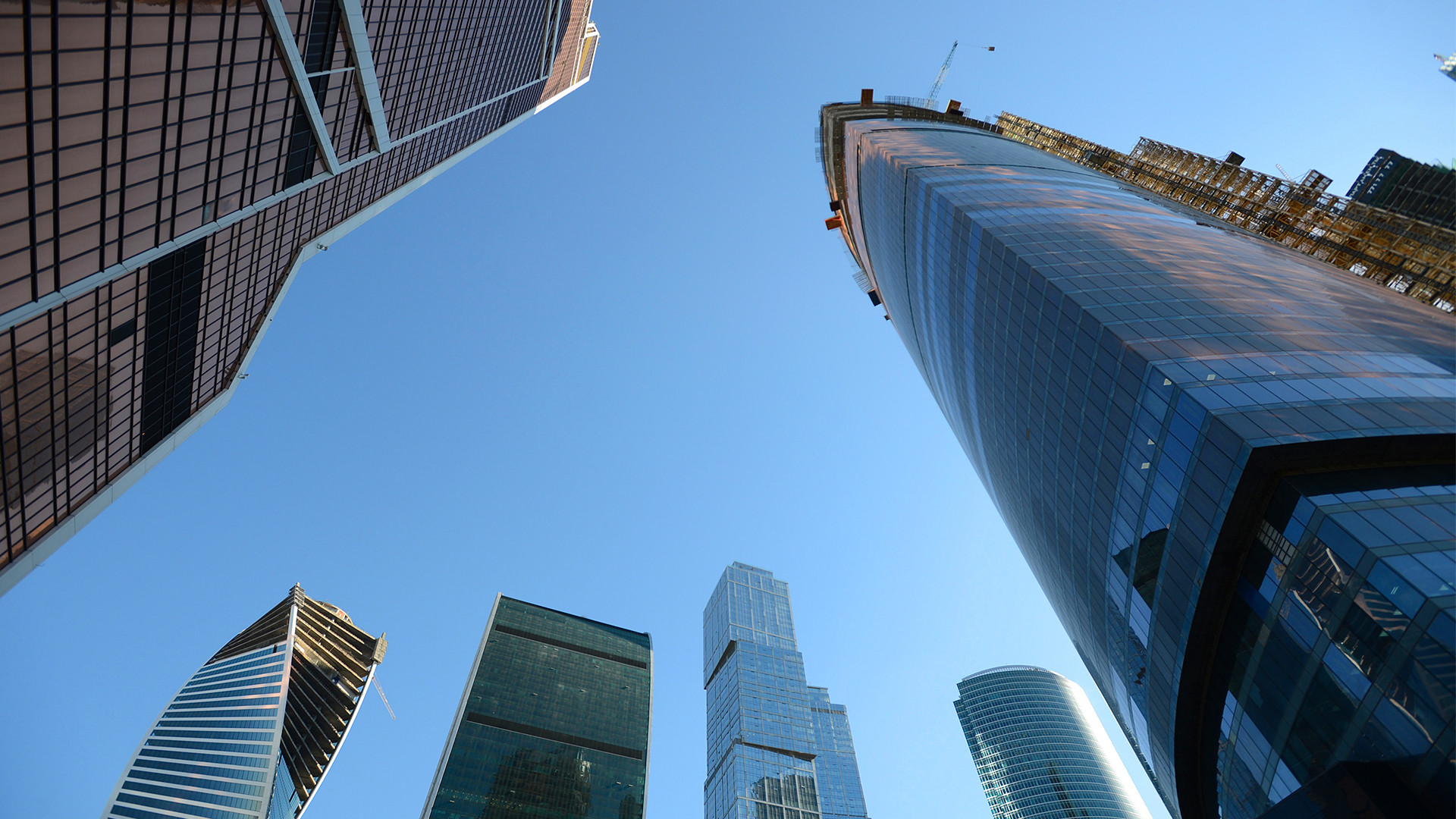 Getty Images
Moscow-City is a vivid skyscraper cluster with a lot of amazing secrets. 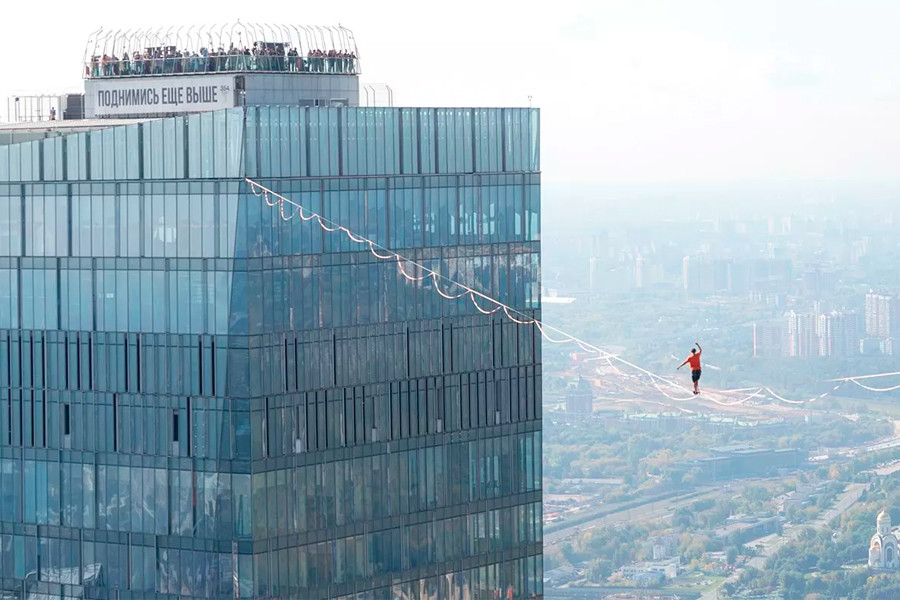 The record was set in 2019 by a team of seven athletes from Russia, Germany, France and Canada. They did it on September 8, on which the ‘Moscow-City Day’ is celebrated. The cord was stretched at the height of 350 m between the ‘OKO’ (“Eye”) and ‘Neva Towers’ skyscrapers. The distance between them is 245 m. The first of the athletes to cross was Friede Kuhne from Germany. The athletes didn't just walk, but also performed some daredevil tricks. Their record is 103 meters higher than the previous one set in Mexico City in December 2016. 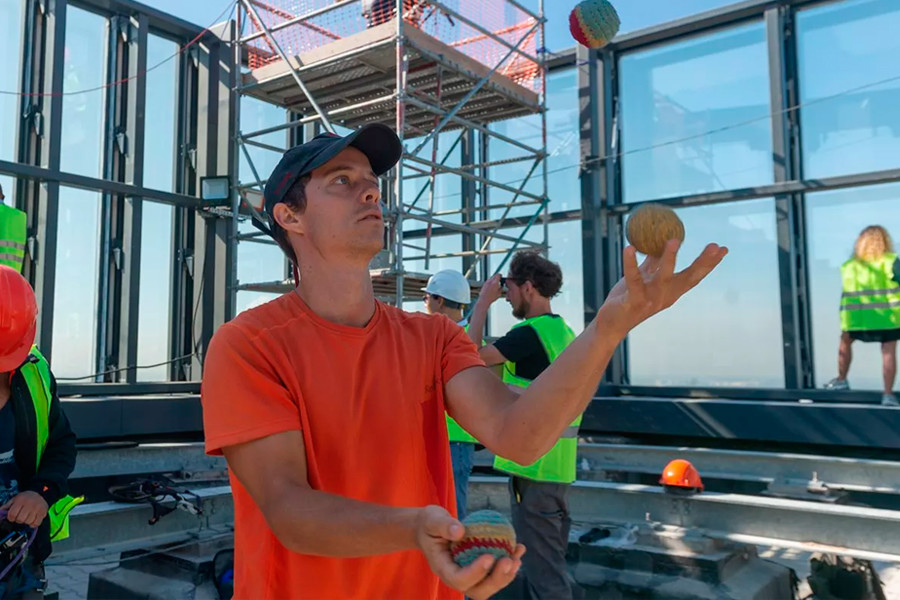 7 out of 10 Europe’s highest skyscrapers are located in Moscow-City. Earlier, the  ‘Federation Tower’ complex’s ‘Vostok’ (“East”) skyscraper was the considered the tallest in Europe. 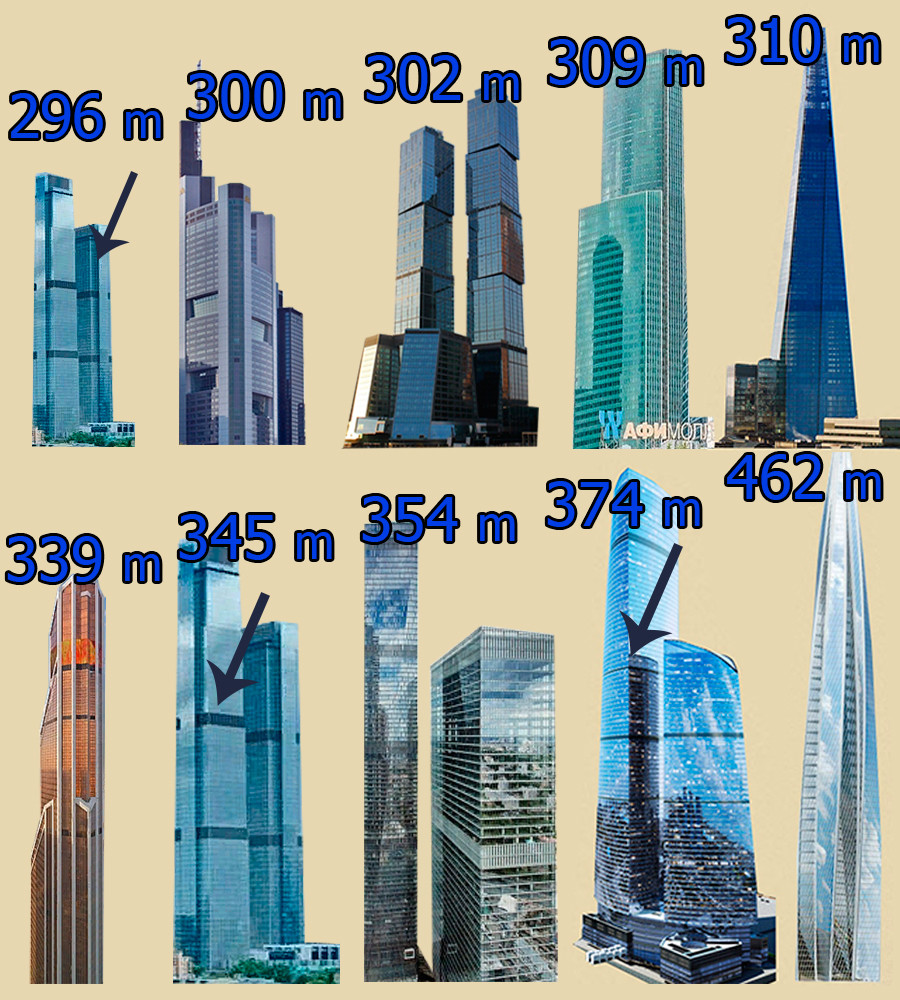 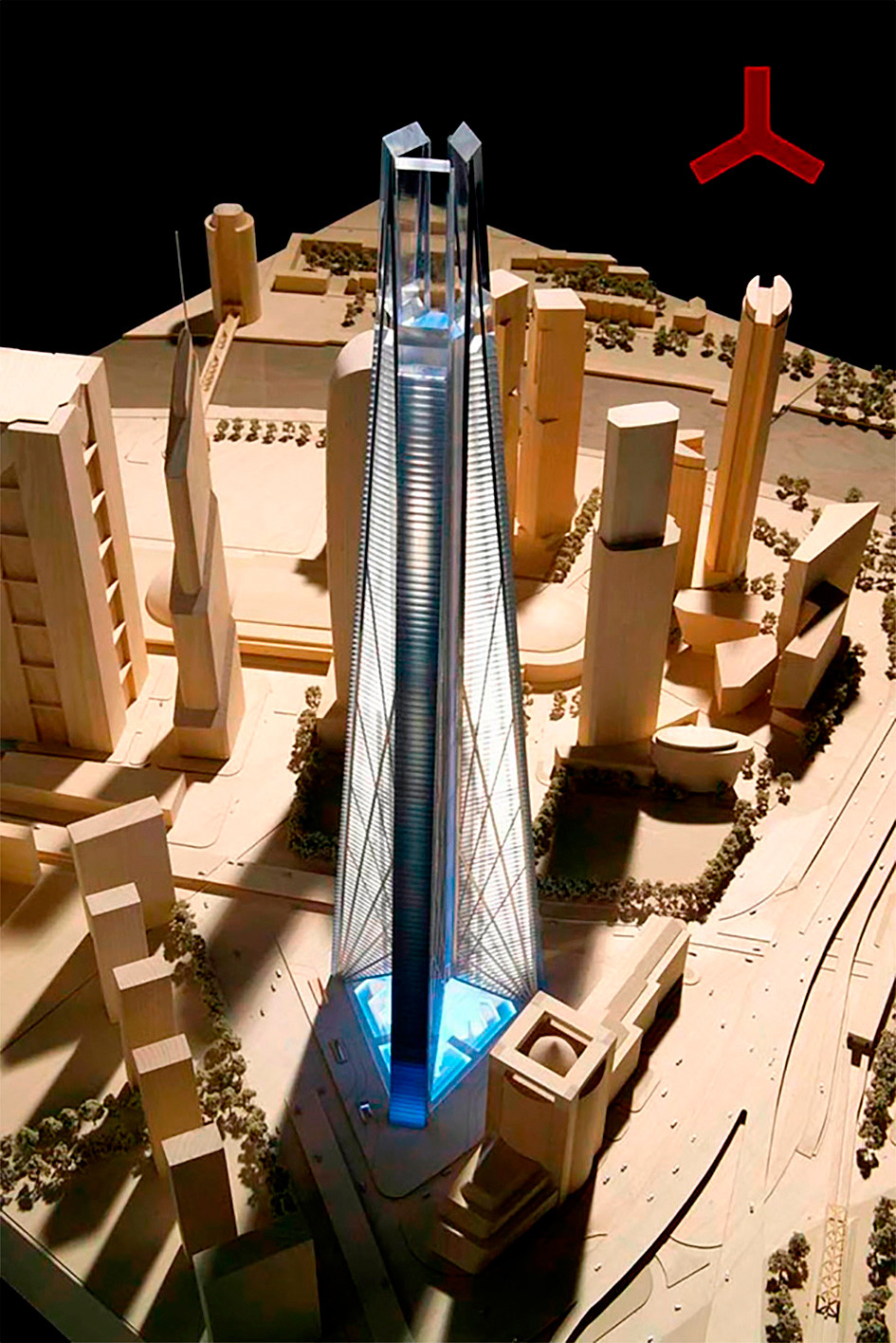 If all the building plans of Moscow-City were realized, the ‘Lakhta Center’ in St. Petersburg wouldn't have a chance to be Europe's highest skyscraper. Boris Tkhor, the architect who designed the concept of Moscow-City, had planned for the ‘Rossiya’ tower to be the tallest. In his project, it was a 600 meter tall golden cylindrical skyscraper ending with a spire that was inspired by traditional Russian bell towers. Then, the project was reinvented by famous British architect Sir Norman Foster. He had designed ‘Rossiya’ as a pyramid ending with a spire. The skyscraper itself would have been 612 meters tall, and the height including the spire would have reached 744,5 meters (for comparison, the ‘Burj Khalifa’ in Dubai, UAE, would have been just 83,5 meters taller). Unfortunately, the investors faced a lot of economic problems, due to the 2008 financial crisis, so the ‘Rossiya’ skyscraper was never built. A shopping mall and the ‘Neva Towers’ complex was constructed at its place in 2019. 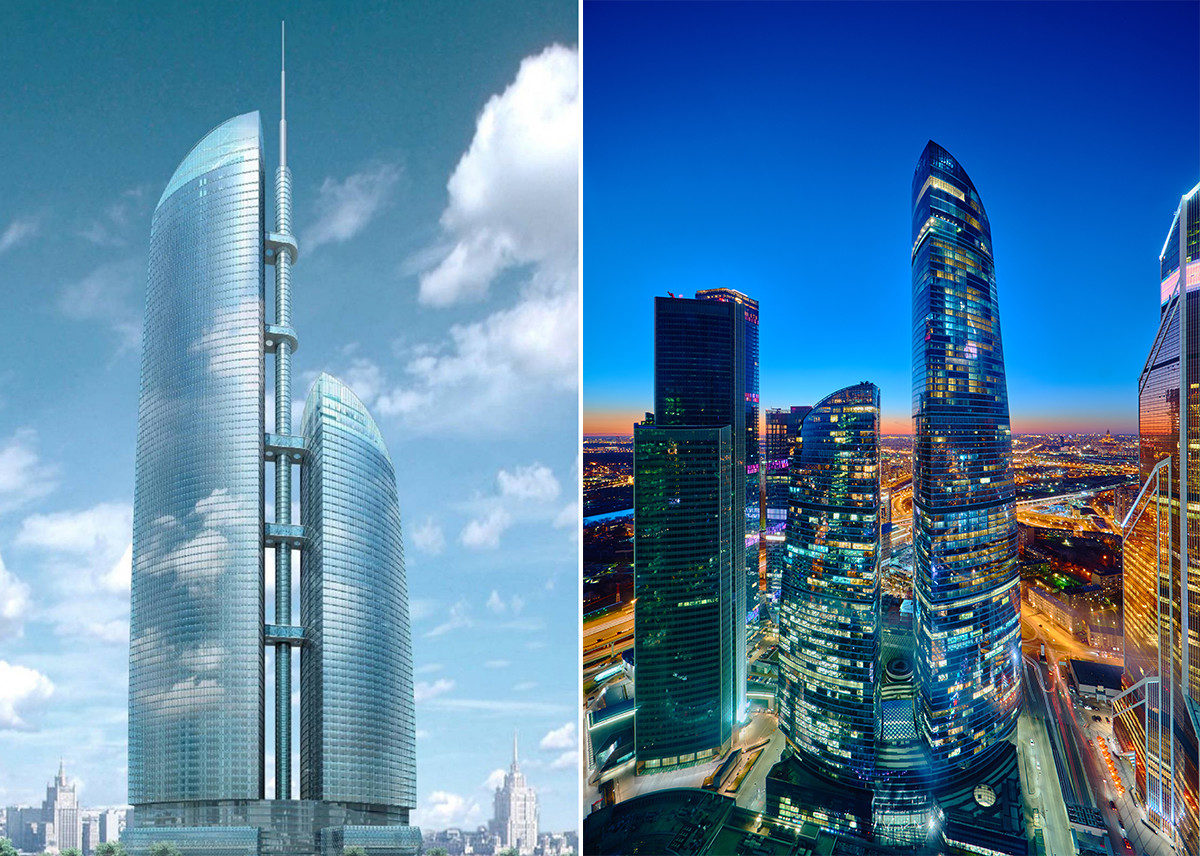 In its first project, the ‘Federation Tower’ was designed to resemble a ship with a mast and two sails. The mast was to be represented by a tall glass spire with passages between the towers. It was planned to make a high-speed lift in it. The top of the spire was going to be turned into an observation deck. But the ship lost its mast in the middle of its construction. Experts at the Moscow-city Museum based in the ‘Imperia’ (“Empire”) tower say, that the construction of the spire was stopped, firstly, due to fire safety reasons and secondly, because it posed a threat to helicopter flights – the flickering glass of the spire could potentially blind the pilots. So, the half-built construction was disassembled. However, an observation deck was opened in the ‘Vostok’ tower. 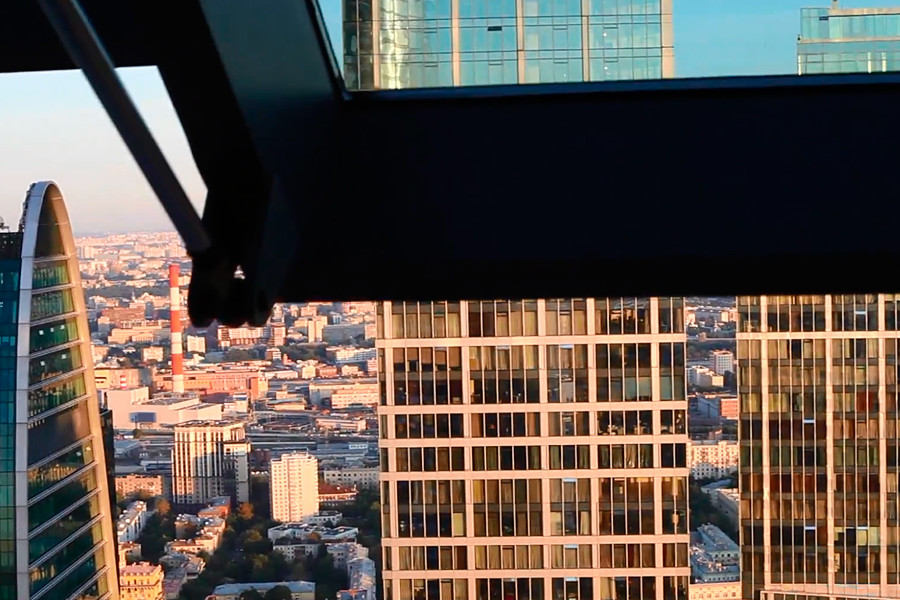 We all know that the windows of the upper floors in different buildings don’t usually open. Experts say that it’s not actually for people’s safety. Falling from a big height is likely to be fatal in any building. The actual reason is the ventilation system. In a skyscraper, it’s managed with a mechanical system, and the building has its own climate. But in the ‘Zapad’ (“West”) tower of the ‘Federation Tower’ complex, the windows can open. The 62nd and last floor of the tower are taken up by a restaurant called ‘Sixty’. There, the windows are equipped with a special hydraulic system. They open for a short period of time accompanied by classical music, so the guests can take breathtaking photos of Moscow. 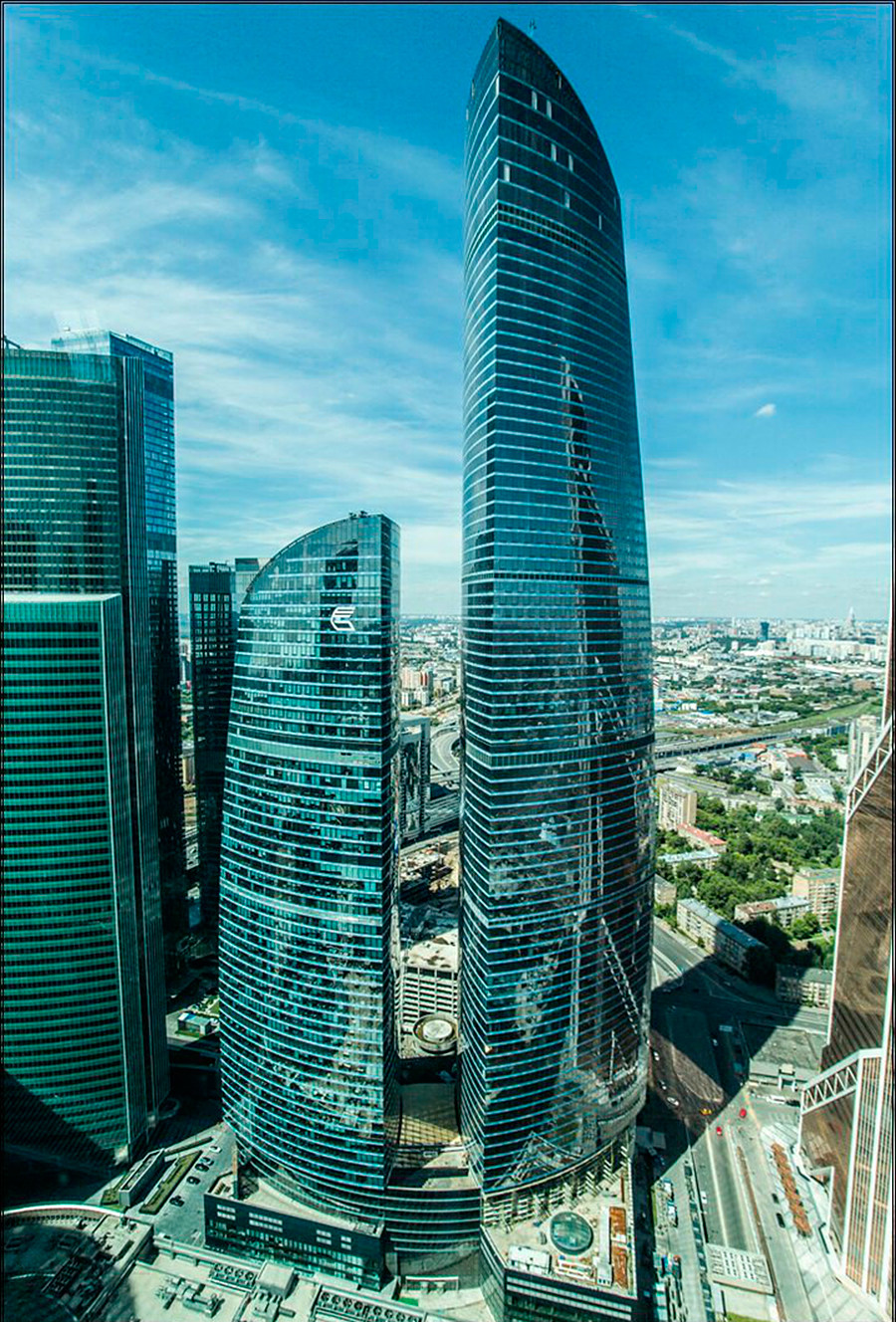 The guests of the ‘Sixty’ restaurant at the top of the ‘Zapad’ tower can be surprised to see cracked glass window panes. It is particularly strange, if we take into consideration the special type of this glass. It is extremely solid and can’t be broken once installed. For example, during experiments people threw all sorts of heavy items at the windows, but the glass wouldn’t break. The broken glass units of ‘Zapad’ were already damaged during shipment. As each of them is curved in its own way to make the tower’s curvature smooth, making a new set of window panes and bringing them to Russia was deemed too expensive. Moreover, the investors had financial problems (again, due to the 2008 financial crisis), so the ‘Vostok’ tower even stood unfinished for several years. Eventually, the cracked window panes were installed in their place.

7. The highest restaurant in Europe 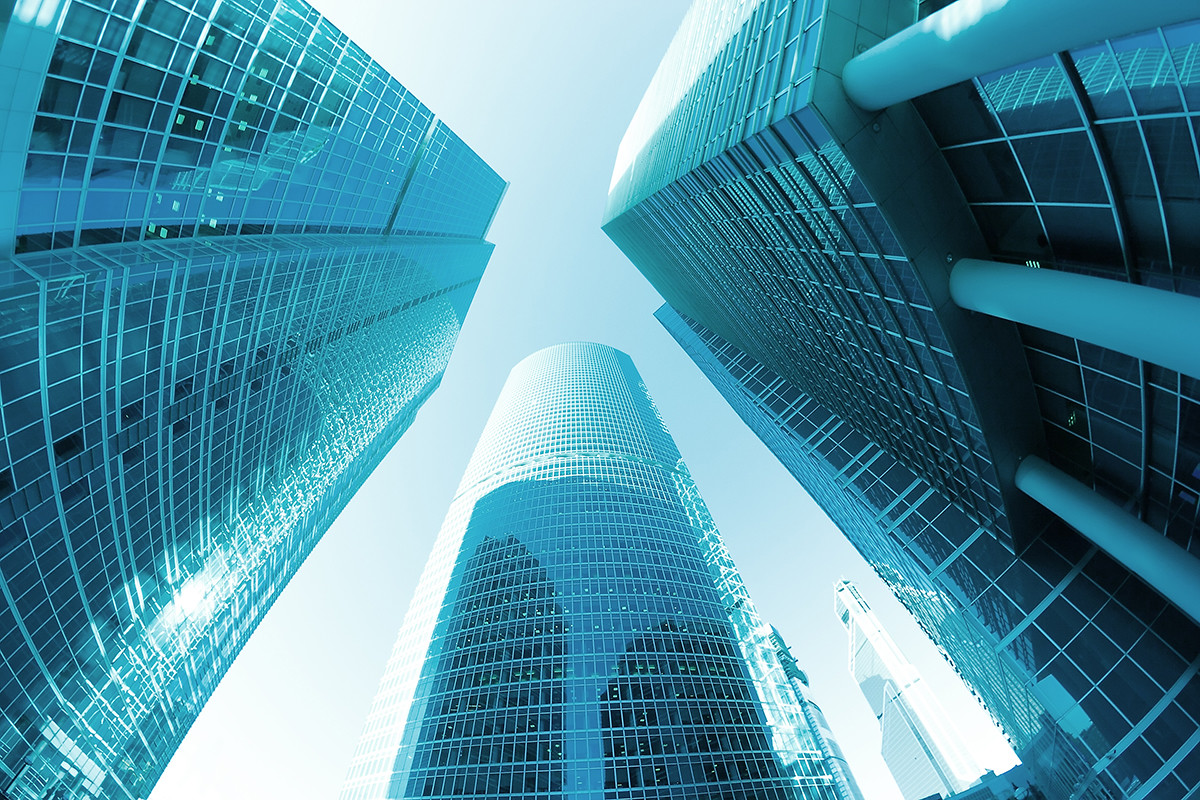 ‘Birds’, another restaurant in Moscow-City, is remarkable for its location. It was opened at the end of 2019 on the 84th floor of the ‘OKO’ complex’s southern tower. Guests at the restaurant can enjoy an amazing panoramic view at a height of 336 meters. On January 28, the experts of ‘Kniga Recordov Rossii’ (“Russian Records Book”) declared ‘Birds’ the highest restaurant in Europe, a step toward an application for a Guinness World Record.