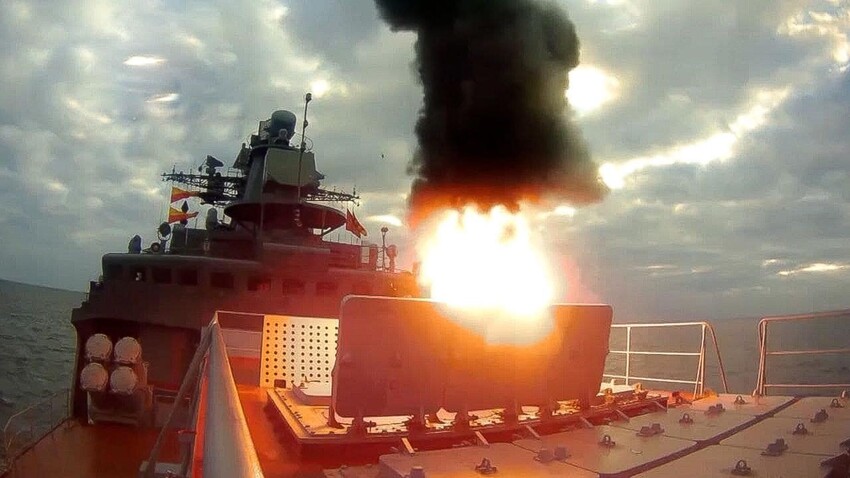 Russian Defense Ministry
It’s the first cruise missile of the Russian fleet that shoots up into the sky and then dives into the sea searching for underwater targets.

The Russian Defense Ministry hasn’t yet revealed its plans for this missile system after the successful test nor announced dates of its possible adoption to the country’s fleet.

But, it was revealed that the new projectiles can be used via already existing ‘Kalibr’ cruise missile launch pads.

So, the new system might be added into the arsenal of the country’s most powerful Admiral Grigorovich- and Admiral Gorshkov-class frigates, as well as to the corvettes stationed in the Black Sea.

Everything known about the ‘Answer’ missile system

‘Answer’ consists of four parts - a new cruise missile, a launchpad, a hydroacoustic station that searches for submarines under the water and an on-board computer that uploads targets’ coordinates and flight path into the projectile’s “brains”.

“This is the first Russian cruise missile that “sheds” during flight and dives into the water in search of submarines,” says Viktor Murahovsky, editor-in-chief of Homeland Arsenal magazine.

The new missile can receive information about underwater targets through hydroacoustic stations on board, as well as from anti-submarine planes and sonar beacons.

Once in the water, the projectile tracks down targets via a homing warhead and is capable of finding modern all submarines - atomic, diesel-electric, multipurpose and even the small-class ones.

“The are few ways to fight such a torpedo - to shoot out false targets that imitate submarine sounds and grab a projectile’s attention, or to use small underwater bombs that explode in the projectile’s flight pass and destroy it,” the expert notes.

The new missile isn’t the most devastating and powerful weapon on the market. It’s a small-sized projectile with 50-60 kilos of explosive components in its warhead. That would be enough to destroy a submarine with a direct hit, but wouldn’t be enough to disable it if the missile explodes 50 meters from it.

The military command hasn’t unveiled the official characteristics of the new weapon, but it’s known that an export version of this missile will be able to hit submarines 50 kilometers away. So, it can be assumed that the “domestic” version of the weapon will be capable of hitting targets at least two times further.