Evolution of Russian tanks throughout the 20-21 centuries 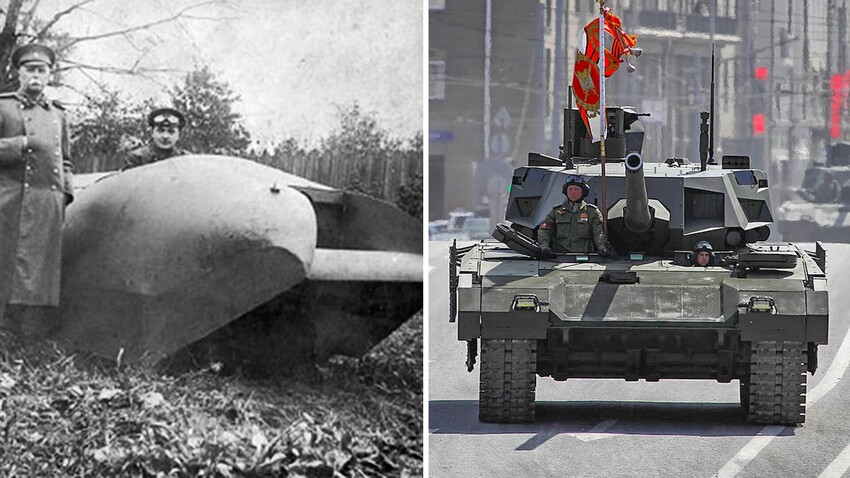 Vitaly V. Kuzmin/vitalykuzmin.net
Find out how these machines evolved from machine guns covered by steel plates to the most powerful infantry weapons on the battlefield.

The first battle machines that would later be known as ‘tanks' appeared in 1914 after the beginning of World War I.

These were mostly lightly armored machine guns on tracks that could easily be pierced by bullets and/or shrapnel.

Russia also had its prototype of the first tank. It was called Vezdekhod, which literally means “anywhere goer” in Russian. 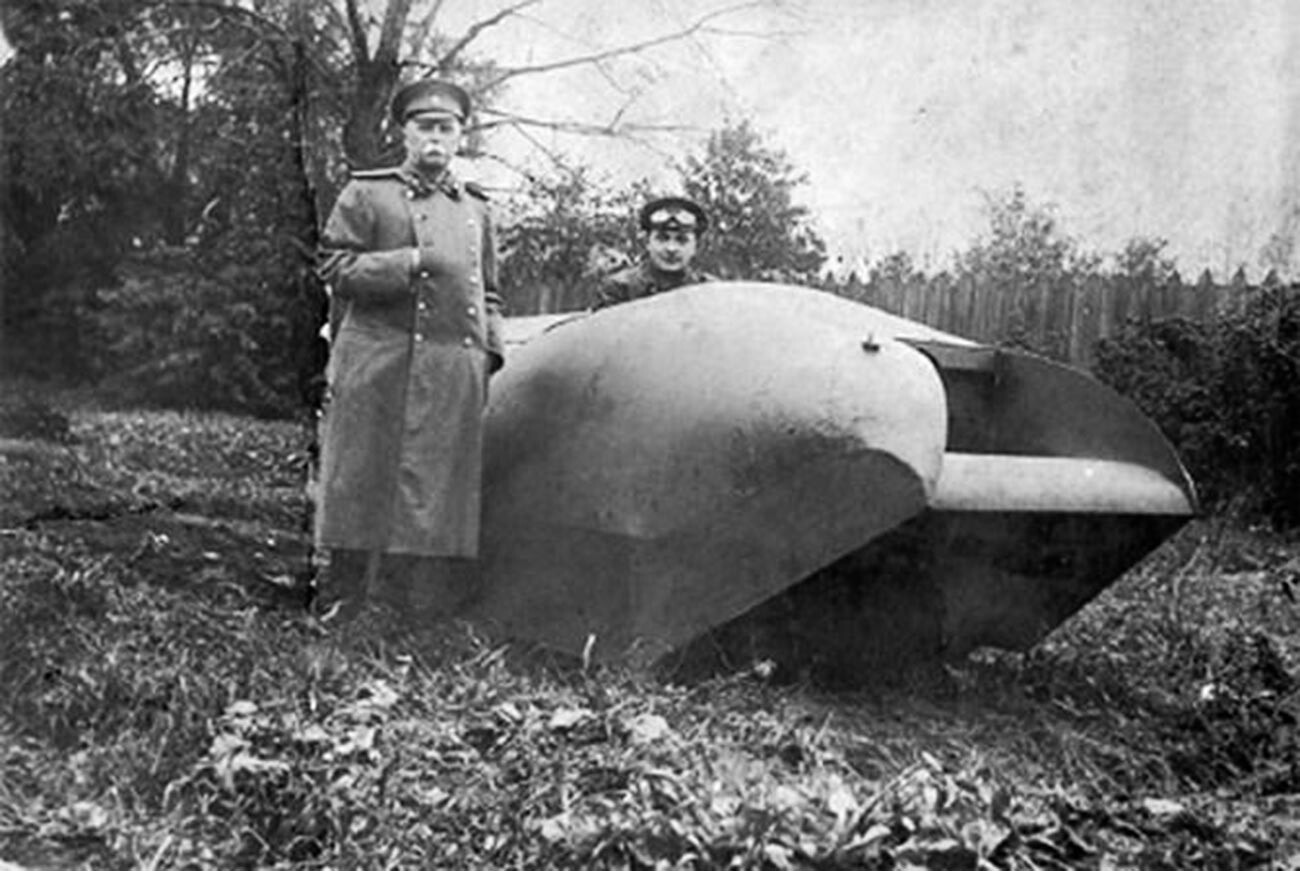 A picture of the 'Vezdekhod' prototype tank built by Aleksandr Porokhovschikov

According to the test commission Report No. 4563: "It appears that Vezdekhod is a sound and practical idea; it can achieve a speed of 25 Verst/hour (26.67 km/h (16.57 mph)). In addition to this, the Vezdekhod can ascend a slope with a 40 degree incline, cross a trench three meters wide, and a vertical obstacle of 3/4 meter. All significant holes and rough surfaces were crossed wherever tests were carried out. The Vezdekhod steers easily during fast motion and turns very satisfactorily. In all, the Vezdekhod crosses terrain and obstacles impassable to conventional motor vehicles.»

The prototype appeared only in 1917 when the country was negotiating peace terms and preparing to leave the war. So the machine didn’t go into production as World War I was surpassed by the revolution in Russia.

“Russian Renault” and the first ever Soviet tanks 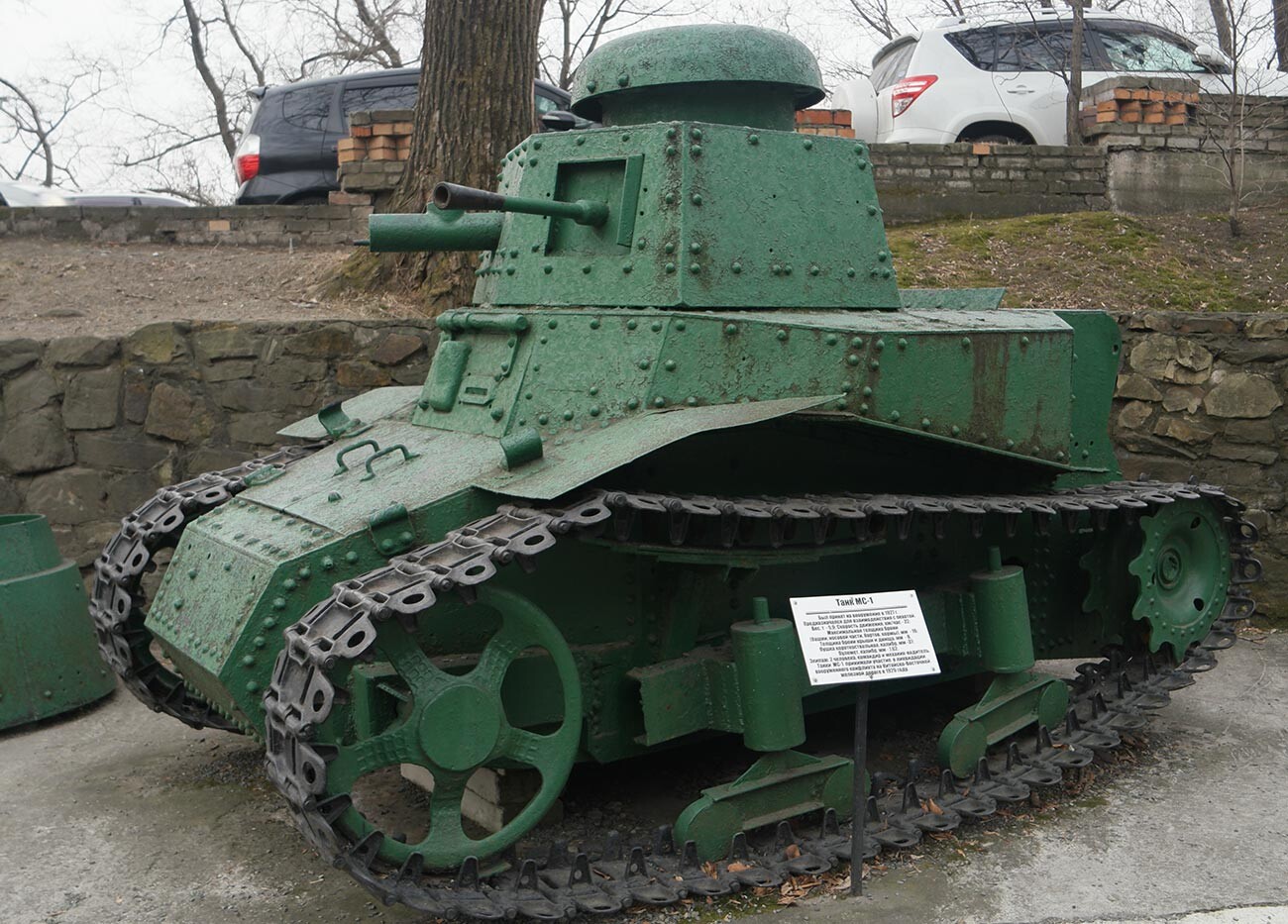 The very first Soviet tanks represented nearly exact copies of foreign machines that were either purchased abroad or obtained during WWI. These machines were used as prototypes to test the best foreign technologies (weaponry, armor, suspension, and driving characteristics) and adapt them in future machines.

First Soviet tank prototypes appeared in 1920-1921. They were called ‘Russian Renault’ as they were based on the French «Renault FT-17» platform. A couple of years later manufacturers created a combination of the Italian «Fiat-3000» with a suspension from the French «Renault NC27».

All of these vehicles laid the foundation for the development of the MS-1 (or T-18) light tank. These machines had improved suspension required for Russian off-roads, they were shorter than foreign counterparts and were armed with powerful 7,62 mm Degtyaryov machine guns capable of effectively piercing light armor vehicles and eliminating infantry on the battlefield.

It took years of testing, and by the 1930s, the military command formulated the requirements for tanks on the battlefield. These machines were supposed to weigh 12 tons and were used as fast and powerful infantry support units. They had to be maneuverable and also used as a shield during the onset.

Experiments of the 1930s 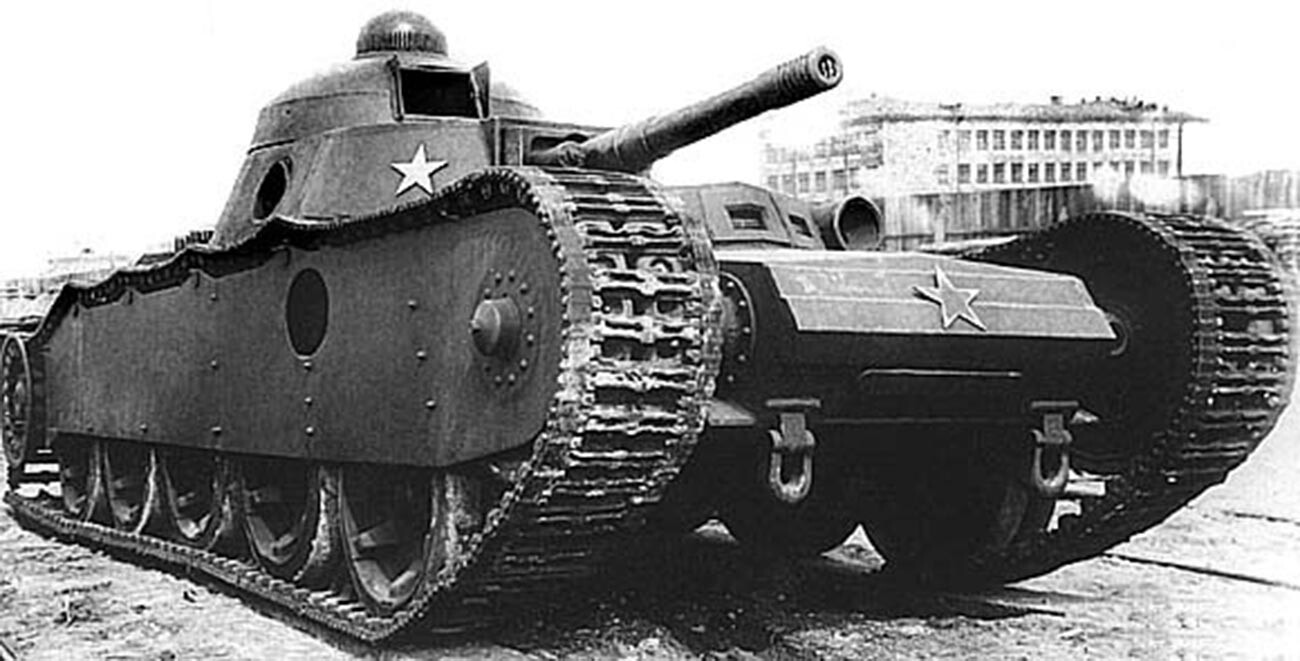 Tank Grotte TG at the Military Academy of Motorization and Mechanization of the Workers' and Peasants' Red Army named after I.V. Stalin, 1931

The early years of tank development in the Soviet Union demonstrated that the country lacked experience in tank engineering, personnel, and large-scale production.

Alongside the development of ‘one-gunned' light, medium and heavy tanks, the country experimented with creating heavy multi-towered machines. For example, these were the prototypes of TG-1, which was created by the German engineer Edward Grotte, and a T-35 tank, which was based on the British A1E1 «Independent».

However, the battles of the Soviet-Finnish War showed that the infantry required less powerful, but more maneuverable machines on the battlefield. Heavy tanks were better suited for sieges and attacking heavily armored targets, rather than infantry.

The Soviet Union, therefore, decided to focus more on creating and developing 'one-gunned' machines and mainly medium tanks that were perfectly suited for mass production and had quite effective weapons for supporting infantry on the battlefield. 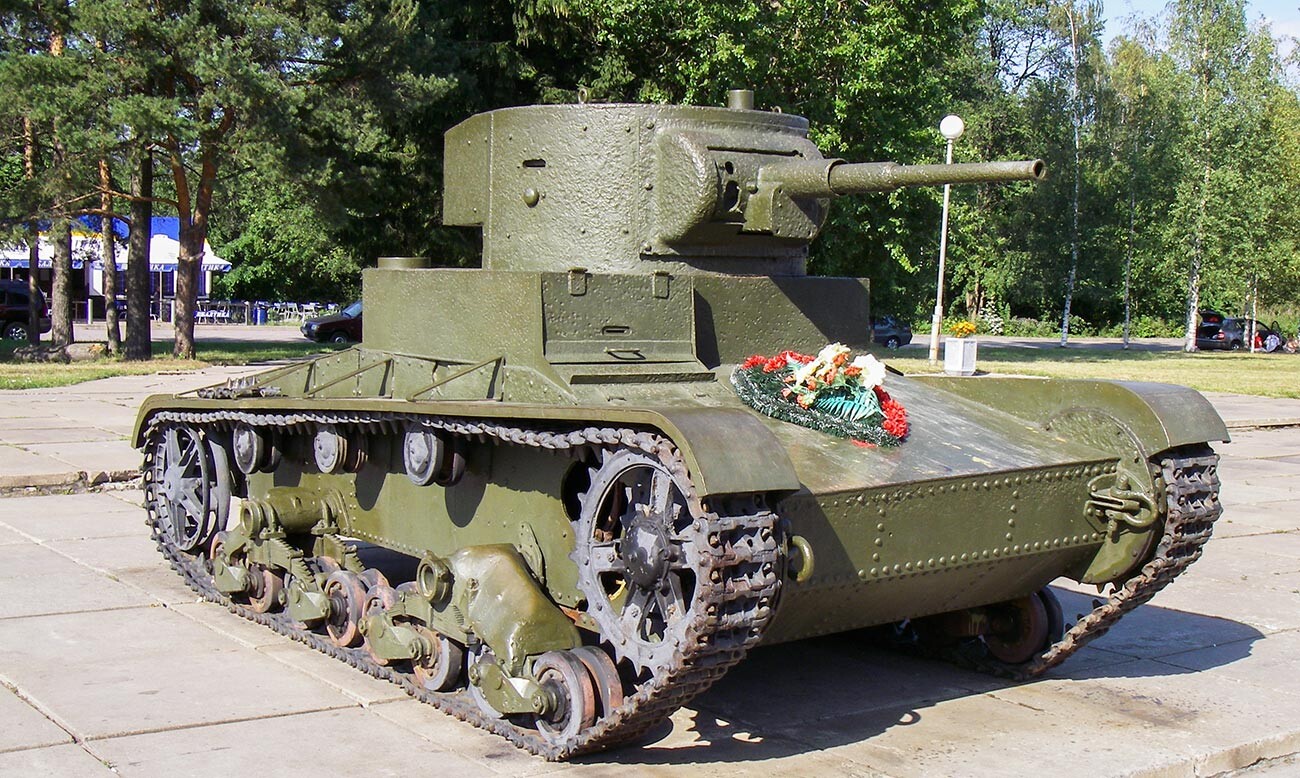 The difference between the machines lay in their purpose on the battlefield.

Light tanks were used for reconnaissance missions, as well as support vehicles for airborne troops and marines.

The most widely used Soviet light tank during WWII was T-26. The army had as many as 11,300 machines of this type. Each of them had a 45-mm cannon with two 7,62x54 mm Degtyarev machine guns. These weapons were quite effective against infantry, but could do little damage to heavier and bigger machines.

Medium tanks became the workhorses on the battlefields of WWII.

The most widely used tank of the Soviet army was the T-34 armed with a 76-mm gun. Its appearance turned the tides of war in favor of the Soviets, as it was the most effective weapon against powerful and heavily armored German tanks. The T-34 was also maneuverable and effective against other targets - outposts, machine-gun posts, armored vehicles, infantry and so on.

This tank became the most mass-produced vehicle of the Soviet army with more than 35,300 units created during and after the war.

The Soviet army also had heavy tanks with massive frontal armor and the most powerful 100- and 120-mm guns of that era. The most well known Soviet tank of this type was the IS-2. The vehicle is named after the Soviet leader Joseph Stalin. It was the Soviet army’s most powerful tank, capable of  disabling any target with a single shot. They played a great role during the sieges and storming of cities, but were quite expensive and difficult to produce, so the army had fewer machines of this type in its ranks compared to light and medium tanks. There were as many as 3,500 IS-2 used. 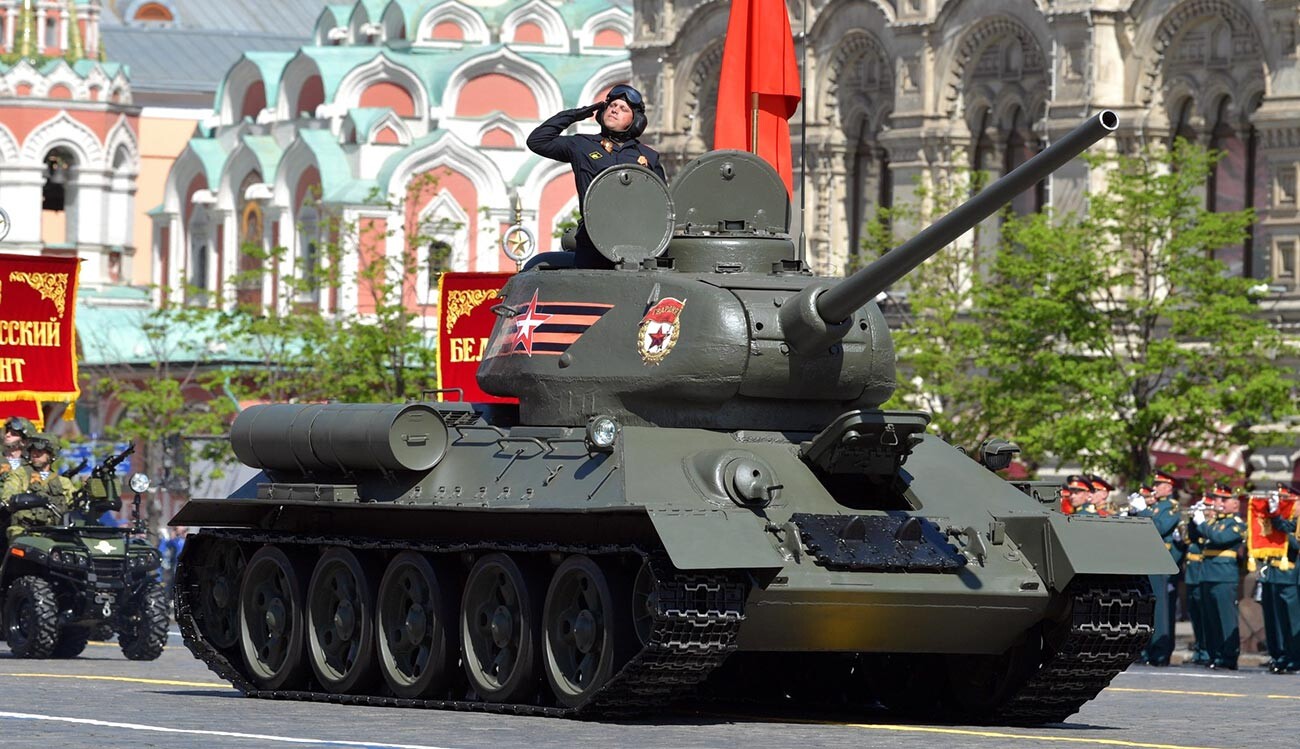 The division into ‘generations’ began after WWII once engineers around the world developed fundamentals and battle-tested all the novel features required to create an effective tank.

Tanks of the 1st generation were created in 1950-1960. They represent modernized versions of World War II tanks that took the best tank technologies from American, Soviet and German tanks.

The Soviet Union invested a lot into the modernization of the T-34 series. The new model T-34-85 received an 85 mm gun, which was more effective against new era heavy cast armor. It also received an optic rangefinder and a modernized control system to make the machine more accurate, as well as a hydraulic transmission and new rubber and metal tracks . 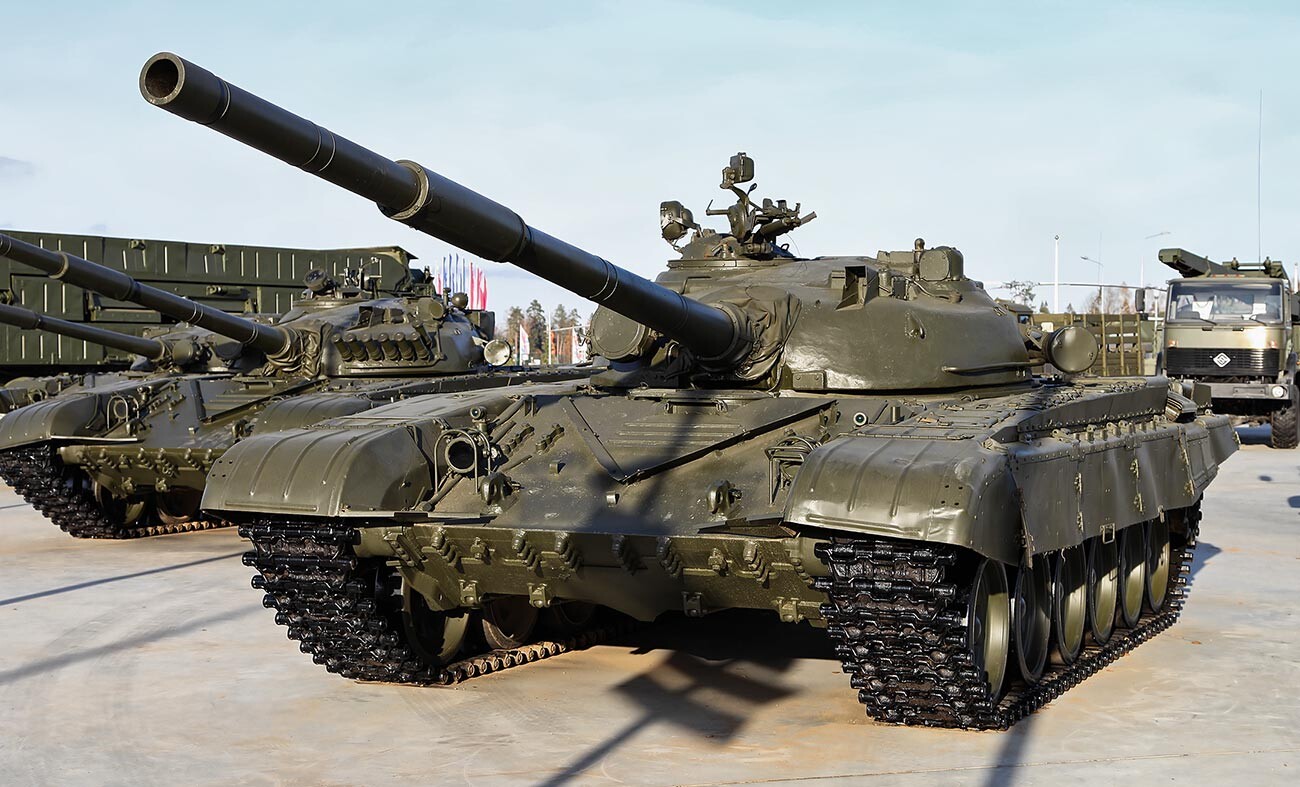 T-72 during a military exhibition in Moscow suburbs

Russia’s most widespread tank of that period is T-62. The country had as many as 20,000 vehicles of this type. Its features and differences from predecessors can be summarized by the extensive use of the main armament stabilization system and the massive addition of an active combat system in limited visibility conditions. To put it simply, it had the first night vision devices. 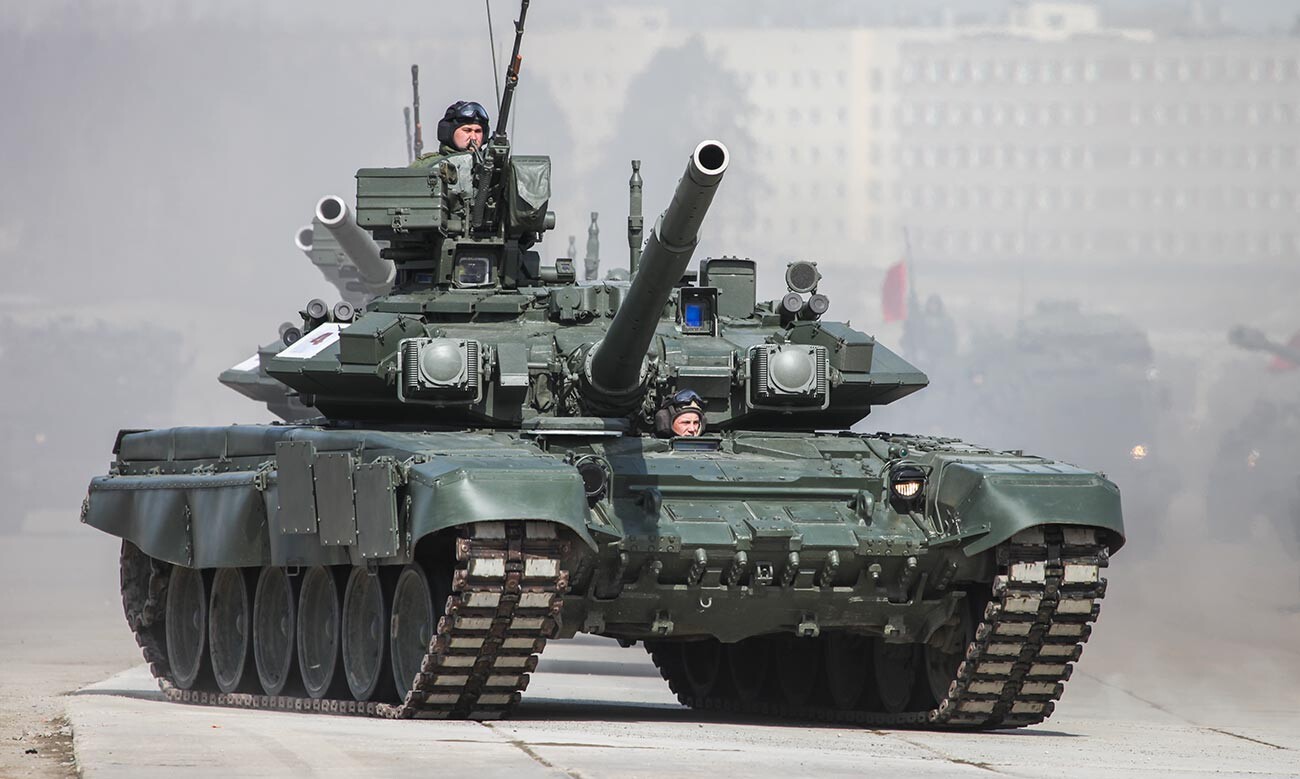 T-90 during a military parade rehearsal in Moscow suburbs

The third generation started production in the  1970s and continues to this day. These are currently the most widely used tanks in militaries around the world.

The Russian army’s third-generation tank is the T-90. It received a new integrated fire control system with a digital ballistic calculator and a laser rangefinder. Both of these systems make it one of the most accurate tanks on the battlefield today.

It also has a set of external weather condition sensors and thermal imaging surveillance and targeting system that enables effective firing at any time of day or night.

Tracks of these tanks were also modified. They have a hydrostatic transmission in control systems that makes it possible to turn at any radius. 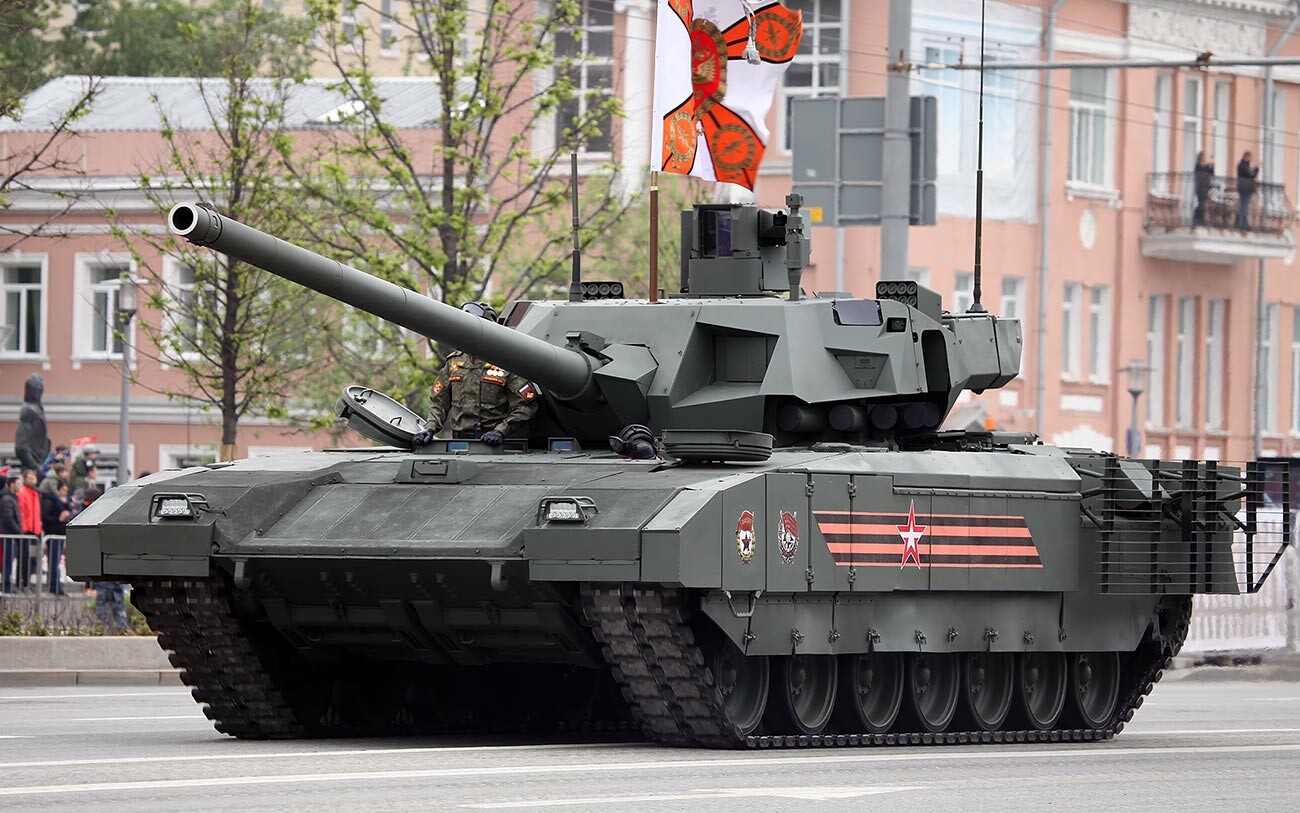 The T-14’s capabilities drastically outclass its foreign rivals, making it the only 4th generation tank in the world at the moment.

First of all, this is the only tank in the world with an unmanned turret - the crew is situated in a capsule that is protected by multi-layer metal-ceramic frontal armor. It is equivalent to a meter-thick homogeneous metal armor, which, according to the manufacturer, cannot be penetrated by existing shells or anti-tank missiles.

Creators suggest that the tank has the best armor on the market.

T-14 is equipped with the fourth-generation 'Malakhit' dynamic armor, capable of repelling shots from hand-held anti-tank grenade launchers, as well as destroying modern sub-caliber anti-tank rounds with a 95 percent probability.

It also has a new generation of active ‘Afganit’ protection systems, capable of intercepting even anti-tank shells and, for the safety of the surrounding infantry units, “blind” anti-tank guided missiles by using a “smoke and metal” protective shroud.

Armata is also the first “stealth tank” with drastically reduced visibility in the infrared, magnetic, and radio specters. To put it simply, anti-tank missiles with homing warheads won’t be able to detect it on the battlefield.

The machine is also equipped with an interesting hi-tech feature - ultraviolet HD surveillance cameras with 360° all-around coverage. They are capable of detecting the operation of machinery engines by the ionized gas exhaust and sending reconnaissance data to the main computers.

Speaking of reconnaissance, the machine is capable of launching its own airborne ‘Pterodactyl’ targeting drone, complete with surveillance radar and infrared sightings.

Its information will be used not only by the tank crew but also by other units on the battlefield as T-14 Armata has the first Unified Tactical Link Management System. This feature includes eleven subsystems responsible for the coordination of electronic warfare, artillery, air defense, engineering systems and logistical assets.

To put it simply, it can coordinate all other units on the battlefield, and help to tip the balance into its operator’s favor