What did Russians search for on the internet in 2015? 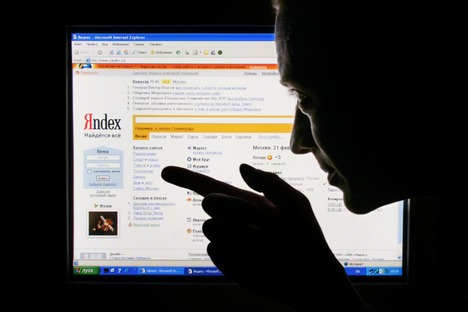 Yandex presented its traditional ranking of the most popular searches in the past year.

Roman Kalinine/Kommersant
The Russian internet search engine Yandex has analyzed queries and search terms and named the major events and developments of 2015 for users (mostly Russians), as well as the people and personalities who provoked the greatest interest.

Russia’s leading internet search engine Yandex has presented its traditional ranking of the most popular searches in the past year.

The most popular search topic was the Russian plane crash in Egypt on Oct. 31 that killed 224 people, with the war in Syria and ISIS in second place. The third most searched-for topic was the 70th anniversary WWII victory parade on May 9.

The most popular searches in the events category also included the "speech by President Vladimir Putin at the UN,” the "crash of the Su-24 in Syria" and the "terrorist attacks in Paris." In addition, Yandex users were interested in news related to March’s solar eclipse in Russia and the Immortal Regiment WWII memorial campaign in which Russian citizens paraded through cities on May 9 with placards bearing pictures of relatives who fought in WWII.

In the men’s category, the Yandex top three included Russian opposition politician Boris Nemtsov and musician Batyrkhan Shukenov, who both died earlier this year – Nemtsov was assassinated outside the Kremlin on Feb. 27. The women whose names were most often searched for on Yandex include popular singer and actress Zhanna Friske, who died in June, Russia's Eurovision candidate Polina Gagarina and Anna Duritskaya, the Ukrainian model who was with Nemtsov on the evening of his murder.

Of the various premieres in this year, Yandex users were most interested in the presentations of the Samsung Galaxy S6 smartphone and the Windows 10 operating system, as well as the launch of the sports channel Match TV.

In the internet category, the top search was for the Memory of a Nation website, where the Russian Defense Ministry started to publish original documents related to WWII.

People were also looking for videos about do-it-yourself rubber band bracelets and the phenomenon of the white/blue dress, the meme that originated when, on Feb. 26, a photograph of a lace dress was posted on Facebook, resulting in heated discussion among web users as to its color – blue with black stripes or white with gold. Subsequently, it was found that, in reality, the dress was blue.

The world according to Russian search engine users

As far as sporting events were concerned, the most searched-for news stories were about the Ice Hockey World Championship, and the matches between Russia and Canada on May 17, and Russia and the U.S. on May 16, which were part of the tournament.

The leading movies, according to the searches, were Fifty Shades of Gray, the last episode of The Avengers and the seventh installment of Fast and the Furious. Russians were also looking for Game of Thrones, Peppa Pig and Gravity Falls.

Read more: The world according to Russian search engine users>>>