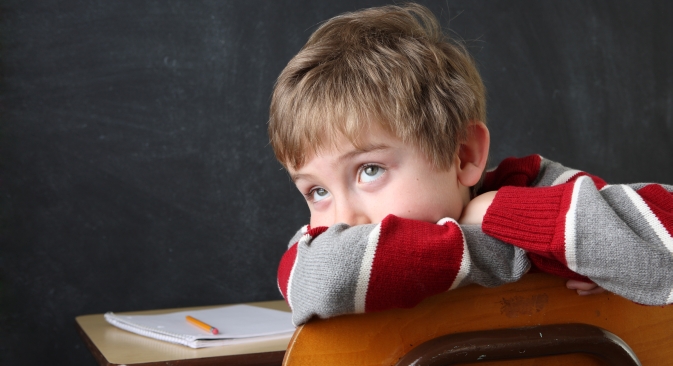 Some children are struggling in the classrooms, and at home. Source: Shuterstock / Legion-Media

Children with attention problems are suffering in Russian schools. Yet Russians are suspicious of the diagnosis and the drugs. Do children need a different model than the U.S.?

Larissa Bogdanova, a young mother who lives in St. Petersburg, has a 12-year-old son who has been diagnosed with Attention Deficit Hyperactivity Disorder (ADHD). In the United States, a diagnosis of ADHD is not uncommon. In fact according to the Center for Disease Control and Prevention, more than 11 percent of boys (and 5 percent of girls) between the ages of 3 and 17 are diagnosed with the disorder.

However in Russia, the diagnosis is not well accepted, and is often scorned. A dramatic increase in diagnosis of ADHD in the West has come hand in hand with psychopharmacology. For Russians, it appears more and more that Western children are medicated into submission.

Some psychologists and parents say this position misses the point: The kids need support both in academic performance and social development.

Bogdanova said she was relieved to finally find a teacher who was open to working with her son.

“I spoke with a very experienced teacher and she was surprised that no one had ever told her about [strategies and accommodations] that can be developed for certain children. Many teachers think the problem is contrived and the behavioral difficulties stem from a bad upbringing or the child being spoiled.”

Parents in Russia have few options. Most turn to the Internet for information and hope that teachers will be responsive to their suggestions. Bogdanova explained, “I was lucky, the teacher was willing to learn and immediately sat my son right next to her at a separate desk,” a typical strategy for easily distracted or impulsive children.

Although living in Moscow or St. Petersburg increases the chances that parents will meet a teacher who has heard of ADHD, it is no guarantee that they won’t react with prejudice. Anna Morozova, a Moscow-based mother, said that her child’s teacher “claims that individual work doesn’t come under her responsibility. She refuses even to speak to my child and explain what she’s dissatisfied with.”

Irina, a mother, teacher, and the founder of the first online support group for families affected by ADHD, said she believes that a shift in the Russian psyche is necessary if ADHD is to be seriously tackled. In her opinion “having a neurologically damaged or mentally ill child is still shameful in Russia – it’s like having a child with a flaw. This is especially true when it’s not an obvious disability like Down’s Syndrome or Polio.”

Irina’s website seeks to change this attitude by allowing mothers to share research, ideas, and success stories which they can then spread to wider society. Yet she did not want her name used in this article for fear of rebuke.

It’s clear that children are struggling in the classrooms, and at home. Educational and medical support in Russia is inconsistent, and health professionals, teachers, and mothers are now calling for the reform of existing structures.

The controversy over medicating children

ADHD is characterized by inattention, impulsivity, and hyperactivity — symptoms which may be exhibited together or in isolation. The complexity of the disorder means that individual treatment is vital, and in the UK and U.S. the approach usually combines therapy and medication – predominantly Ritalin.

From 2002 to 2010, the use of ADHD drugs in the USA grew by 46 percent, with the UK’s use quadrupling in the same period. About 5 percent of children in both countries now regularly take ADHD medications.

While some in the West wonder if children have become overmedicated, in Russia the situation is at the other extreme. Russia has cautiously watched the increasing medication of Western children, and Ritalin remains an illegal narcotic with the same classification as cocaine and heroin.

Arseniy Pavlovsky, a psychologist working at the Rost Center for Diagnostics and Consultation, said that a rethink of the legislation is long overdue. He explains that “a lot of parents try to get Ritalin from the Baltic countries or Belarus – legalizing it would solve many problems.” According to Pavlovsky, Ritalin’s lack of legal status is partly due to the fact that the medical profession is unfamiliar with the drug’s benefits for ADHD.

“It’s not a common diagnosis because specialists are very badly informed about the problem. There’s hardly anything published in Russian about it. Children who exhibit signs of ADHD are frequently categorized under a different umbrella.”

Pavlovsky stressed the need for national research in order to form an updated consensus on ADHD’s origins and effective treatment. This knowledge gap is also found in the school system, where there is no systematic training program for teachers, leaving them completely unprepared for the challenges of teaching a child with ADHD.

For Irina, attitudes toward ADHD represent Russia’s current position between old modes of thinking and a passion for modern developments.

Some children are struggling in the classrooms, and at home. Source: Shuterstock / Legion-Media

She explained that “Russia is still quite a superstitious country, and this means there are two very different cultures here. On the one hand some parents say that all drugs are poisonous and will only harm your child. Others are obsessed by medication and give their kid antibiotics every time they catch a cold. This kind of parent dreams of a panacea that can cure ADHD. I don’t know which is worse.”

A consensus is building that there is an urgent need for social services, such as family crisis support services, parental education programs, and support services for mothers. Russia currently has eight types of schools for children with special needs and developmental difficulties, but the country has retained the old Soviet classifications.

Until the system is updated, children with complex, more recently understood, issues such as autism and ADHD simply cannot be diagnosed or treated.

Teach your children well: special needs in the classroom

The Russian government is currently focusing on the commercial management of schools, and is discussing measures which would see schools choose whether to outsource psychologists and speech therapists, and abandon correctional classes.

Psychologist Arseniy Pavlovsky sees the potential loss of psychologists in schools as a double-edged sword. He explained that psychologists are often connected to the administration, meaning that they serve the school’s interests if there’s a misunderstanding between teachers and parents.

“They just say the problem arose in the family, and blame the parents," he said. "If psychology services are outsourced then there’s a chance that the parents can receive a more independent and unbiased diagnosis.”

Speaking as a teacher, Irina does not believe children with special needs, including ADHD, should be warehoused. She argues some new measures being considered could result in the destruction of child services in schools.

“Education isn’t a priority for the government and this is a big mistake," she said. "We should implement nationwide child support services in schools, based on the Western model.”