American playwright talks about his quarter-century in Russia 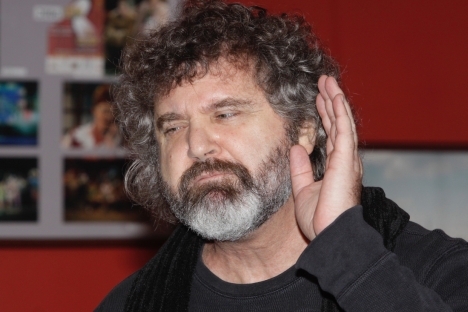 John Freedman: Russian laziness is the result of the climate. Winter is cold, so you want to stay under the covers, while the muggy summer makes you want to lie on the floor. Thank God, I have an interesting job that saves me from sloth. Source: Phot

John Freedman, an American theater critic, playwright, and columnist for The Moscow Times, has lived and worked in Moscow for more than 24 years.

Freedman speaks to Rossiyskaya Gazeta’s Adilya Zaripova, Anastasia Keizerova and Irina Korneeva about his motives for remaining in Russia.

Rossiyskaya Gazeta: In February, an organization called PopUp Theatrics is going to stage a unique performance of modern plays in New York via Skype, including one of your plays. How is that possible?

John Freedman: It's part of a multicultural festival held once a year by the organization International Affairs, called "Long-Distance Affair." The salt of the project is to get people from different countries to fall in love with each other creatively, without having to leave their towns and cities.

The festival will run the whole of February. My play is called "Five Anecdotes from the Heart of Buenos Aires." Oksana Mysina [a leading Moscow actress and Freedman's wife] is also taking part.

It's all the rage in America now. New Yorkers come and buy a ticket, but don't enter a theater, rather a room with 20-40 computer screens. They sit down at a screen for about 10 minutes and watch a short play, starring, say, Oksana Mysina. Her performance ends, the viewer get ups and moves to the next screen, and so on, for a half hour.

RG: Is Russian theater in its current form really worth uprooting for?

J.F.: For me, it was definitely worth uprooting from the States for the sake of Russia's great theater tradition and my love for Oksana Mysina.

RG: Has theater ever let you down here in Russia?

J.F.: How could Russian theater, with its stunning diversity and richness, ever disappoint? Russian theater can only disappoint a Russian critic. Therefore, on the contrary, it captivates me and keeps me going. I will say openly that life in Russia is not easy, for many reasons – from weather to politics. But when you live in a place with such amazing theater and such astonishing people, say, Alexander Bakshi, Dmitry Krymov, Kama Ginkas and her band, Yuri Muravitsky Maxim Kurochkin, Pavel Rudnev and at least 200 others, then of course life is richer.

RG: Do you remember your first impressions of Moscow nearly a quarter century ago? Were they heartening?

J.F.: I came here to live in 1988, but that was by no means my first time in Russia. I arrived in the middle of perestroika. The first thing that caught my eye was that nothing had changed. In 1988, everything was exactly the same as it had been in when I lived here in 1979, discounting a few kiosks selling fried chicken.

Since then, I've witnessed a staggering amount of change. I'd say this is the fifth, sixth, or seventh Russia I've lived in since coming here. It's forever shedding its skin and reinventing itself as a country.

RG: Was there ever a moment when you felt like ditching everything and moving closer to Hollywood?

J.F.: The theatrical world that Oksana and I inhabit is so rich – we both know we wouldn't find it anywhere else. It's our strength and “raison d'etre.” If we left, we'd go crazy in three months. Life is meaningless without Moscow, without Moscow theater.

RG: Your Russian is excellent. Do you think in the language?

J.F.: I began way back, even before I arrived in 1988. The first 5-7 years... I used to get dreadfully tired by the end of the theater season. My brain would be screaming because it had to do everything in Russian. But, by the eighth year, it was second nature. It's not an effort anymore.

RG: How do things stand regarding citizenship?

J.F.: I'm still a U.S. national, but I have a Russian residency permit, which allows me to work and travel freely.

RG: What is harder to come to terms with: Russian weather or Russian laziness?

J.F.: They go hand in hand: Russian laziness is the result of the climate. Winter is cold, so you want to stay under the covers, while the muggy summer makes you want to lie on the floor. Thank God, I have an interesting job that saves me from sloth.

RG: Any advice for new arrivals in Russia?

RG: Let's stick to the world of acting that we know and love.

J.F.: First, I'd tell them to get immersed in the culture of the place – the arts. Museums, literature, theater... I'd immediately suggest going to a contemporary stage work in Moscow. In the last eight to 10 years in particular, theater has been the medium through which to explore and uncover the society and politics of the new Russia. So, naturally, I would say to not look only at the news. Do not look only at what is happening in the political sphere - take a look at what's happening in the arts. That's Russia's greatest asset, and its wealth is unparalleled.

Every country has its treasures, but Russian art, Russian theater, Russian music, Russian literature are sublime. I've lived here for 24 years, and I never cease to admire the artistic accomplishments of the past 300-400 years and today’s artists continuing that tradition. This is not my home, but it's my world – the world in which I live.

{***Others who have adopted Russia as their homeland***}

Others who have adopted Russia as their homeland

Currentzis Studied in St. Petersburg in the 1990s. He has conducted the National Philharmonic of Russia since 2003 and the Novosibirsk Opera since May 2004.

Extract from an interview with Currentzis: "I can honestly say that the best period of my life is intertwined with Russia. I grew up here. You won't believe it, but I can go to the Opera Bastille in Paris, for example – one of the finest opera houses in the world – sit with my Russian pals and talk only about how much I miss Russia... I am one of those people proud to say that they have devoted their lives to great Russian art."

Mer studied at the Saratov Conservatory and St. Petersburg State Theatre Arts Academy. She has been an actress at the Petr Fomenko Studio since 2007, with stage roles in "Rhinoceros," "Tales of Arden Forest," "Alice in Wonderland" and "Ryzhy."

Extract from an interview with Mer: "The first time I opened a French-Russian phrasebook was on a plane to Russia. The worst thing was not being able to understand a word for six months... in Saratov and St. Petersburg I was told that a French woman could never make it on the Russian stage. But I tried, and Fomenko took me in."

Mastrangelo has been a resident living with his family (Russian wife, one son) in St. Petersburg for ten years. He works with the leading Mariinsky Theatre Orchestra and the Novosibirsk Philharmonic.

Extract from an interview with Mastrangelo:

"I was born in Bari, the resting place of St. Nicholas (who is held in great esteem in Russia)... How can I explain why I started to learn the Russian alphabet as a 9-year-old? My mother's maiden name is Rousseau. My father, a top-class amateur pianist, adored Russia and Russian music. He named my sister Valentina in honor of Tereshkova, the first female astronaut... Every day I feel more and more Russian, and now I’ve got a Russian passport."

Stojanovic graduated from the Belgrade University of Arts. She has been a resident in St. Petersburg since 2000, collaborating with the Foundry Theatre, Andrei Moguchy's Formal Theatre, the Comedian's Shelter Theatre and Osobnyak Theatre.

Extract from an interview with Stojanovic: "When they started bombing Yugoslavia, we thought our time was up... I came to Russia for 20 days but ended up staying 10 years... Why do I like it here? The Russian ‘banya’ is paradise. I love lying in the snow after a session in the steam room, or diving into a pool. My friends and husband here in Russia taught me how to do it.”

Haapasalo was born in the Finnish town of Lahti and later studied in St. Petersburg. He is famous in Russia for his role in the comedy "Peculiarities of National Hunting." Haapasalo was awarded the Silver St. George honor for his role in Alexander Rogozhkin's "Kukushka."

Extract from an interview with Haapasalo:

"First I wanted to study in England. But then I thought, why go there when there's a country next door with a great acting school? In the early 1990s, it was a gamble – no language skills, no friends. I got robbed and swindled. But then, by chance, I ended up in the shoot of ‘Peculiarities of National Hunting.’ And then I got offered more roles. I feel more at home here than I do in Finland. There are two Villes: in Russia I'm an actor; in Finland, a half-baked businessman."