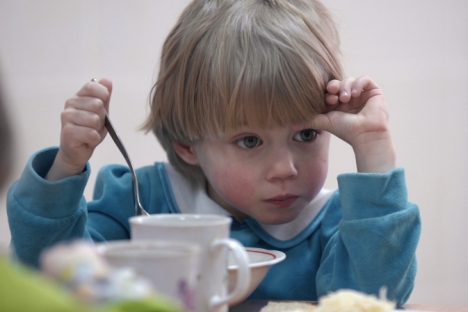 Some Russian orphans adopted by American families may go to the U.S. if courts sanctioned adoption before January 1, 2013. Source: ITAR-TASS

The Supreme Court ruled that Russian children should be allowed to go to the United States in the cases where a local court sanctioned adoption before January 1, 2013.

Russia's Supreme Court has ruled that Russian children whose adoption by American citizens was sanctioned by a court before the start of the year should be sent to the United States, despite the so-called anti-Magnitsky law prohibiting adoptions by Americans.

The Russian Supreme Court clarified on Tuesday, Jan. 22, that court decisions made before Jan. 1 on the adoption of Russian children by U.S. citizens must be executed.

"In cases in which the adoption of minor citizens of the Russian Federation by citizens of the United States was sanctioned by a court prior to 1 January 2013, and such decision has entered into force (including after January 1, 2013), the children are to be transferred to their adoptive parents," reads a letter by Supreme Court Deputy Chairman Vasily Nechayev.

The adoption of Russian children by American citizens was prohibited under amendments to the anti-Magnitsky law, passed by the Russian parliament and signed by President Vladimir Putin at the end of December 2012. The bill prohibits the transfer of orphans to the United States, terminates the activity of institutions engaged in legal support of the procedure in Russia, and denounces the agreement on adoption that was struck between Washington and Moscow in summer 2011.

Clarification on the draft law was required due to uncertainty over how to proceed with orphans adopted by Americans but unable to leave Russia before Jan. 1 – the date the anti-Magnitsky law entered into force.

For instance, a three-year-old orphan from St. Petersburg was previously unable to fly to the U.S., despite the fact that a court had approved the adoption. The transfer was suspended because the prosecutor lodged an appeal against the city court's decision, which had been adopted at the end of 2012 but had not yet come into legal force.

The case appeared in the blog of Svetlana Agapitova, a commissioner for children's rights in St. Petersburg. According to Agapitova, on Jan. 21, the St. Petersburg Prosecutor's Office filed an appeal against December's ruling on the transfer of three-year-old Denis from a psycho-neurological orphanage to an American couple in the United States.

"The boy was born prematurely with a whole raft of illnesses: damaged central nervous system, heart disease, convergent squint, purulent meningitis in infancy," reads Agapitova's blog. "His mother gave up her son at birth. Relatives never came to see him."

According to Agapitova, the child was rejected by Russian adoptive parents on no fewer than nine occasions.

On Jan. 22, an ombudsman spokesperson stated that the prosecution would not try to prevent the departure of Denis. "Today, the Prosecutor's Office officially informed the commissioner for children's rights that it would not oppose the ruling," said the statement.

So far this year, St. Petersburg authorities have sanctioned the adoption of six children by Americans, under decisions taken last year. However, Agapitova asserts that there are still 33 children in the city whose cases have not yet been heard by a court. It seems that Denis was the last.

The article is based on materials from Interfax and Gazeta.ru.