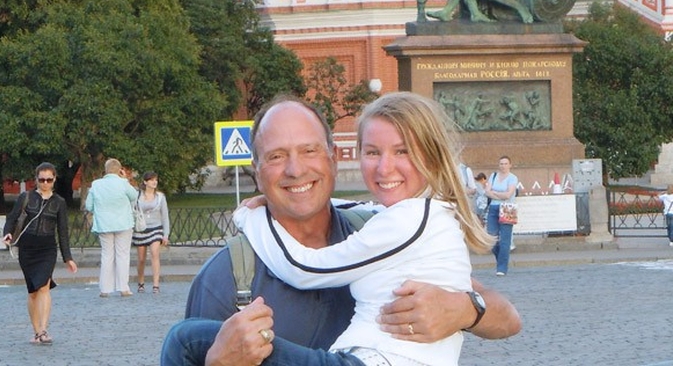 Chris and Glenn Hulses adopted Natalie from Moscow in 1993.

"I was adopted myself, and I have always felt that I want to do the same for somebody that my parents did for me long ago," said Chris. ''Natalie was adopted when I wasn't even 30. She was the first child in our family, our two boys come after."

The Hulses weren't committed to adopting from Russia. At the time they adopted Natalie, China required parents to be over 30; Romania required them to be under 40. Chris was 29 and Glenn was 10 years older. The Russian requirements just worked for the couple.

"When we first saw Natalie, the social workers gave her to Glenn first. They told me after that it's the usual procedure because they need to see the father's reaction. It is understood every mother wants to be a mother. But the father is kind of examined that way,'' Chris said. ''My husband took her in his arms and said, "I hear you need a daddy. And I need a little girl very badly.''

"It was a very important moment in our lives, a defining moment," she added. "And it was definitely the best decision that Glenn and I have ever made."

Natalie was nine months when she was brought to the United States, but she was almost like a newborn. She weighed only nine pounds and hadn't even begun to crawl. Once she was living with the Hulses', however, she began to develop very quickly. The first week, she crawled; the second, she sat; and the third, she stood on her feet. By the time she turned one, she was already walking.

"Her skin was extremely irritated when we adopted her, but in American hospitals it was very curable, so it didn't bother us,'' said Chris. ''We also didn't know anything about what her intellectual abilities would be like. The doctors warned us that we shouldn't expect too much. We knew she would walk, she would probably talk, but nobody could guarantee she would become a productive member of society.

"But she had gone through all the development milestones so quickly, we just didn't have time to worry. Some time later she took the IQ test, and her result was much higher than the average. She's a very beautiful and bright person and I'm sure she will make great contributions to this world," Chris added.

Roger and Karen Torstenson adopted Deanna in 1997 from Kazakhstan and Derek in 1998 from Russia. The Torstensons were unable to have biological children, and once they were sure they wanted to adopt, they decided fairly quickly to pursue international adoption.

"It's quite hard to adopt within the United States,'' said Roger. ''We don't have orphanages here, only foster families. And if you decide to become foster parents, you will probably face some difficulties. The birth mother may have the right to revoke the adoption within the first 30 days, or the birth family may have some kind of visitation rights to an adopted child. I think a lot of couples don't want to get involved in anything like that, and not only in America."

When Deanna was born, she suffered from muscular dystrophy. She stumbled quite a bit for the first few years. But, said her father, “She’s completely out of it now. One of her feet is still a half-size bigger than the other, but it's not an issue. Of course, she'll never be a world class dancer, but you know, singing is her thing, so it’s okay."

Roger and Karen have never hidden anything from the children. They both always knew they were adopted. Derek didn't have any interest in learning about his biological parents, or any wish to go and visit Russia. Deanna was the opposite. Since about the time she turned 6, she began asking about her birth parents. According to the information from the orphanage, she was her mother’s sixth pregnancy, so she was curious if she had brothers or sisters there in Kazakhstan.

“I promised Deanna once that we would find her birth family and meet them,'' Roger said. ''And we made the trip in 2011. My wife didn't want her to go, but I had given my word to Deanna. I didn’t know how to plan the trip, what to expect from the family. I just knew it was a right thing to do and I was not mistaken. We spent 10 days in the village with Deanna and her 9 siblings there."

"Actually everything went quite well, better than I expected," Roger added. "Deanna had a great time, and she said that she felt like she'd found some part of herself that was previously missing. Deanna was smiling all the time we were there. The family treated us extremely well. It actually looked like she'd given them some kind of hope. And they are still in touch.”

Sharon (spoke on condition of anonimity)

Sharon and her husband adopted their first little girl from Novosibirsk four-and-a-half years ago. They were planning to adopt a second daughter from Moscow in January, but now no one can say whether this adoption will go through or not.

Sharon says that she and her husband chose adoption over IVF because it ''just felt right. First of all, we went through massive amounts of paperwork. To become an adoptive parent you must prove everything: what you have been doing from the day you were born till today, how healthy you are, where you live, how much you earn, how much you spend… It’s huge.”

For their first daughter, the couple went through the process twice because between the time they filed the paperwork and their daughter was available, the papers had expired. ''I’m not complaining at all,'' Sharon said. ''I think it’s really good that everything is so hard and serious. If you go through it, it means you are completely sure that you want to adopt a child.”

Sharon's daughter has some health problems, but she does not think it is a big problem.

“These disabilities are minor; it’s not the children’s fault," she said. "I think it is very important to give these babies the second chance. And it’s the same risk like the real parents take – sometimes an unhealthy baby can be born from a healthy couple. So you cannot always tell. And like with the own children, you don’t choose. You just make a commitment to raise them, to love them, to care for them no matter what. That’s a commitment my husband and I decided to make.”

Sharon believes the connection between adoptive parents and a child is as strong as one between birth parents and their own children.

“When we first saw our first daughter it was just like match made in heaven. She was wonderful and it felt so right. She actually looks a bit like my husband, and that day everybody was laughing about it –and the second time it felt exactly the same way. Somebody calls it faith, I don’t know. But it was just meant to happen.”

Now the family is waiting for the second daughter. Even their first daughter can’t wait to see her little sister.

“This is all she is talking about, Sharon said. ''All her fantasies and games are about a little girl that was adopted from Russia, like her.”

The story originally appeared as part of the Bolshoi Gorod project, dedicated to uncovering information on orphanages in Russia.