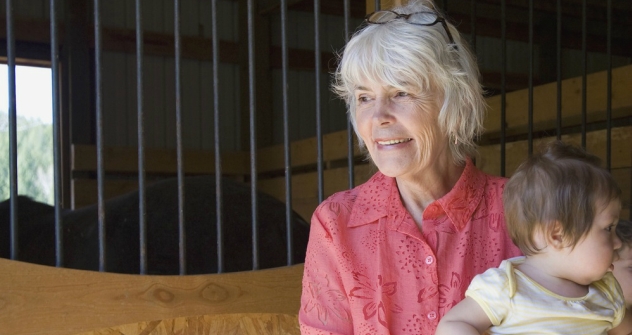 The Ranch for Kids, established by Joyce Sterkel in 2003 to focus on adopted children from Russia, whose adopting family no longer wanted to keep them. Pictured: Joyce Sterkel with and orphan kid. Polaris / Janie Osborne.

Another fight has now erupted over Russian adoptees living in the U.S.: Pavel Astakhov, Russia’s commissioner for children’s rights, has demanded closure of the Ranch for Kids – a place where foster parents send children that they adopted but cannot handle themselves. Astakhov claims that the ranch does not provide suitable conditions for children; the owner of the ranch disagrees.

Astakhov has long criticized the U.S. for its treatment of children adopted from Russia and his latest target is the Ranch for Kids. The ranch, in Montana, is a home that helps kids who have difficulty connecting with their adoptive parents – usually because of fetal alcohol syndrome or attachment disorder. When Astakhov recently tried to visit is ranch, owner Joyce Sterkel denied him access to the premises. As a result, the commissioner ordered the ranch shut down.

Astakhov accused the ranch of keeping children in terrible conditions, but on closer examination, the “terrible conditions” turned out to be classrooms where a single teacher is responsible for 30 children, a two-hour driving time to the nearest hospital and a faulty fire protection system. In Russia, however, the average class size in school is 30 children per teacher, many Russian villages are more than two hours from the nearest hospital, and few buildings have sufficient fire protection systems.

The Ranch for Kids, located in Montana, the U.S., is a home that helps Russian kids who have difficulty connecting with their adoptive parents. Source: Polaris / East news

Sterkel has no love for Russian officials and has made no secret of her wish that they leave her operation alone. A Russian delegation first visited the ranch in 2010, and the visit resulted in a bombardment of letters from officials from the Russian Education Ministry and the office of the Children’s Rights Commissioner’s office requesting information about the children and their adoptive American families. The officials also insisted they should have an opportunity to come to the ranch to talk individually to every Russian adoptee. Sterkel replied the officials would have to have consent of the parents to speak to the children, although she doubted such permission would be forthcoming.

“The parents of the kids on my ranch are fairly negative toward any Russian officials,” Sterkel said. “They believe officials are to blame for concealing the real medical condition of the kids during the adoption.” Sterkel believes that, by attacking her, Astakhov is trying to further discredit American adoptive parents.

“He won’t set foot on my property! It’s outrageous – it’s breaking and entering, and I will make him respect private property!” said Sterkel.

Astakhov has a different view. Anna Rudnitskaya and Dmitry Kartsev of Russky Reporter spoke with Astakhov about his attempted visit to the ranch:

Russky Reporter: Why did Joyce Sterkel deny you entry to her ranch?”

Pavel Astakhov: We scheduled our visit to coincide with the annual Russian-U.S. forum on children’s rights protection. Two weeks before the scheduled date, Ms. Sterkel agreed to receive us and promised to show us around. Then suddenly, with just four days to go, the U.S. Department of State and the U.S. Embassy begin sending signals to our Foreign Ministry that the visit is undesirable. We were told we were not welcome, first vaguely and then with more and more express certainty. The last of their arguments was ridiculous: “It’s the Wild West! They sometimes shoot there!” Naturally enough, the more they held us back, the more we wanted to go. In short, we decided to go despite all the reasoning not to. So we flew out there to the ranch. The gate is open, no one’s in sight. We phoned Sterkel and she says: “I’m out of the country and I’m not returning any time soon. You won’t see any children.”  We concluded she was in Canada – it’s just eight kilometers away, and taking 31 kids there is not a problem.

RR: What happened next?

P.A.: As we stood there by the open gate, we got a call on our consul’s phone: “Hi, this is the district attorney. We are ready to talk to you, come over.”  We talked for an hour and a half. He had a lot of issues with the ranch and its owner. He is sure she is making money on the kids; her business is not transparent. The problem in Montana is that you can actually do that there: “The law is not working here,” he said. Her business is quite simple: she charges money for keeping those kids. There are so-called child brokers, who travel around looking for troubled children and talk their parents into sending them over to the ranch – $3,500 a month and nothing to worry about. If we multiply that by 30 – the number of kids she has now – we get a fairly decent sum. Furthermore, no audits are possible: the ranch is registered as part of a church mission, this exempts it from taxes and inspections. Specifically, the district attorney said they could not send a commission over to check on her employees and their salaries, to check for any infringements on their rights, although they have information that she uses child labor. And the local sheriff added there was a lot going on in the neighborhood associated with the ranch. For instance, last year, escapee teenagers took a local bar apart and then kicked up a row on the ranch. Two of the charges came to the police, complaining they had been raped by older kids on the ranch; then the owner and the manager turned up and, after a while, the kids retracted their testimony and said they had invented the whole story. Another girl was found biking in the neighborhood at 3 in the morning. It turned out she had been missing from the ranch for three days. So, as he was taking her back to the ranch, she asked him to please send her back to her parents. He phoned her home and her adoptive father says – yes, back to the ranch.

RR: But, as far as I can understand, the kids there are quite healthy.

P.A.: This is now held up as a response to all questions –  that the kids suffer from two syndromes: fetal alcohol spectrum disorders and attachment disorder. They apply these diagnoses right and left. But if the kids are actually sick they need treatment. How do you treat them there on the ranch? Work therapy? Love? Maybe you have to consider that your nearest doctor is 200 miles away – what kind of treatment can there be? I admit that Sterkel might actually be trying to do good, but sometimes such sincere laymanship can be fraught with disastrous consequences.