In search of unknown soldiers 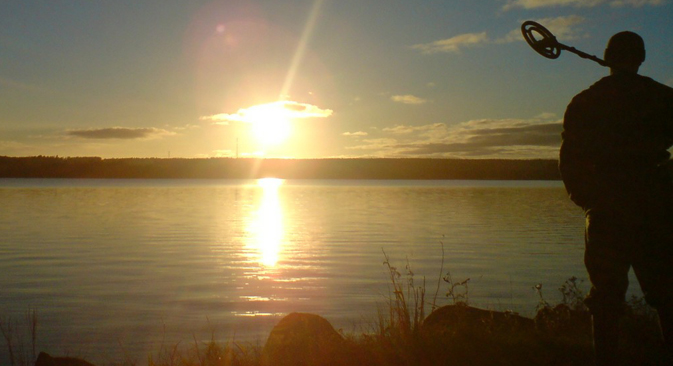 The searchers have found the remains of more than 2,000 soldiers of the Red Army in the Leningrad Region. Source: www.ingria-poisk.ru

For decades volunteer enthusiasts have been searching for the missing graves of Red Army soldiers who perished during the years of World War II.

“While there remains a dead soldier unburied, let no one say the war is over,” said the great Russian Field Marshall, Alexander Suvorov.

The search for the last resting places of soldiers killed in World War II, and identification of their remains, is a task that has been carried on for decades by volunteer enthusiasts. They work in locations which were the most blood-soaked battle zones to restore identities to the anonymous heroes of these campaigns.

One such example is Ingria, a group whose members have located the remains of 2,227 soldiers and officers of the Red Army during 37 investigative expeditions undertaken in the Leningrad Region.

"I've been these searches for 13 years. I feel somehow that this war, in which I never participated, was always latent within me. I spent my youth near Leningrad (modern St. Petersburg), in the locations where the war was fought. And as kids, of course, we were always playing war."

After Yevgeny finished his national service, he enrolled at Leningrad State University's History Department. He says that these searches are something he always wanted to do.

In 2000, when he was already a professor of the St. Petersburg State University History Department, Yevgeny assembled a small volunteer search group from students of the History and Chemistry departments.

"When we got started, the biggest headaches we had were in getting all kinds of different permissions to carry out the digs.

They looked us over with suspicion everywhere we showed our faces, and had no shame in asking us “so how much are you making out of all this?” Or they’d smile and say “Yeah, sure, we know your kind. You talk sweetly, but you’re just the same as the looters.” It took a long time to win their trust, but their attitude eventually shifted."

"Our search group is the only one in St. Petersburg and the Leningrad Region that is made up of students, and the only one that has consistently run three field expeditions each year for the past 13 years.

The essential difference between the official search groups and the so-called ‘black diggers’ (who I prefer to call simply looters), is their reason for doing it. We have a very simple goal – to find the dead soldiers, whereas they’re motivated by profit alone. Our group officially numbers 37 searchers these days."

View the gallery: A sacred military obligation: To find and bury the war dead

It was in the Kirov District, where the Ingria search group works, that the fate of the city of Leningrad was decided in WW2. During the years 1941–43, the Red Army made five separate attempts to break the land blockade of Leningrad. Thus the Kirov District saw some of the fiercest of the war. Even the most conservative estimates suggest that 120,000–130,000 troops were killed there. Yet today the number of those officially buried, including those in mass graves, totals just 37,000.

"During our last expedition, in autumn 2012, we found the remains of a KV-class tank submerged in a swamp. I told the guys it was likely that the infantry would have made after such a tank – and sure enough, we found the bodies of twenty-five dead soldiers nearby."

"Three of the bodies had dog tags, but two of the tags had been in the bog for so long that they had been 'wiped', as we say – you couldn’t make anything out on them. But at least one of them could be read, and we were even able to contact the relatives of the dead man.

His widow was no longer alive, but his granddaughter will soon make the trip all the way from the Krasnoyarsk Krai to pay homage to her dead grandfather. And in December last year, we were able to pass on the last remains of Red Army soldier Kurchenko to his daughters, who wanted their father buried in his native Omsk Region."

In February 2013, Russian Minister of Defense, Sergey Shoigu, met veterans of the Battle of Stalingrad, where he said that his Ministry is willing to offer help in forming search groups across the country and equipping them.

If a soldier is found with a dog tag that is legible, it’s a real reason for the searchers to feel incredible joy – it means that yet another dead soldier has been recovered from oblivion. If the searchers are then able to contact the soldier's living relatives, it’s an immeasurable reward for us. And this is why people head off into the forests and fields, living in tents and carrying out exhausting assiduous work on a daily basis.

"We maintain very close links with the Germans. During the time our group has been working, we’ve organized several excursions for German schoolchildren. In 2011, we received a search party from Germany, and we set off together to do excavations in the 'cursed’ Kruglaya copse. If we found a German body, we’d say “Guys, this is your Kamerad here.” And if they found one of ours, they’d let us know, and we’d extract the body."

When the Ingria search group finds a dead soldier of the Third Reich, his remains are handed over to the German War Graves Commission. They bury their dead at Sologubovka, the world’s largest war cemetery for German soldiers outside Germany. It’s in the Kirov District of the Leningrad Region. To date, 82,000 German soldiers have been buried there.

"When I read stories in the papers about the 'black diggers' finding arms stashes, or stories about someone selling them, it just makes me laugh. The reason is that, in the overwhelming number of cases, these weapons are just in an unusable condition. Last year, we uncovered  105 bodies and 32 pieces of ordnance. At the end of a search, we document all our finds and hand over any weapons to the police, or to the Ministry of Emergency Situations."

Official Ministry of Defense records that even decades after the end of WW2, the number of unburied soldiers on battlefields – from the Valley of Death near Murmansk to Berlin – amounts to 1,054,000 troops. During all these years, nearly 450,000 bodies have been recovered by search and buried with full military honors.

While there remains a dead soldier unburied, let no one say the war is over. When asked if the war will ever be considered over, Yevgeny Ilyin answers: “We will never be able to find the last soldier. But it’s our responsibility to do our best.”