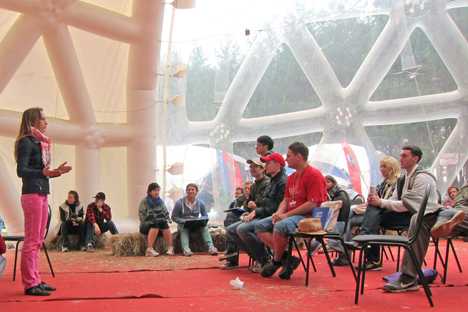 The participants focused on networking, studying and promoting their own projects. Source: Vsevolod Pulya

“When people were building the Tower of Babel, God had to give them a variety of languages to scatter them all over the world. Apparently, [God] doesn’t like representatives from different nations coming together up here, either,” InterSeliger curator Alexander Selivanov said jokingly, referring to the torrential rain and cold weather that made many people change their plans and avoid swimming in the lake.

Despite the weather, InterSeliger, an international exchange and forum held from July 22–27 in Tver Region (about 235 miles away from Moscow), brought an unprecedented 800 participants from 139 countries together.

Rather than build a tower, the Seligerians (as the participants call themselves) primarily focused on networking, studying and promoting their own projects.

“People who have spent a week traveling, sleeping in airports and losing their luggage still come to Seliger to meet with young people from all over the world and to see Russia — that’s a dream for many people,” Selivanov said.

Young Model United Nations participants at Seliger were supported by U.N. Secretary General Ban Ki-moon, who sent a special letter calling on them to find like-minded colleagues and to effect progressive changes in the world: “Continue honing your skills and inspiring others to do great things.”

Inspiration at the forum came not only from Ban Ki-moon, but also from experts and instructors, who gave a series of lectures and workshops on a wide variety of topics — from art and leadership, to practical steps in starting your own online store.

Georgetown professor Sam Potolicchio came to the forum for the second time, to give lectures on charisma, public relations, leadership and personal growth.

“The best thing about this forum is its energy, inspired students and cultural diversity,” said Potolicchio, for whom Russia has become a second home; in addition to being a professor in Washington, he runs an educational program at the Russian Presidential Academy of National Economy and Public Administration.

Even the forum’s participants most likely did not anticipate such a multicultural environment. “When people from different countries have the opportunity to talk and look one another in the eye, they begin to understand each other better,” said Li Huanru from China.

Katrina from Latvia welcomed the opportunity to meet with “the leaders of tomorrow” — the young folks who come to Seliger—the majority of whom lead national youth movements or major student unions and are, in a word, sought-after activists. “We must therefore work with young leaders, so that they put Seliger at the top of their agenda,” said Selivanov.

Those who share Katrina’s enthusiasm for multicultural outreach — the “leaders of the future” — have to attain it at the cost of personal comfort; forum participants live in tents and eat meals from a mobile kitchen trailer.

The day after the international exchange, the Seliger Facebook page is full of updates: Someone has been taking a hot shower for three straight hours; someone else, clearly exaggerating, claims it has been eight hours.

Even last year, when opposition activists demonstrated their projects, there was practically nothing left of the unabashed pro-Putin ideology that manifested itself at the forum in 2011 — when activists from the Nashi (the name means “Ours”) pro-Kremlin youth movement essentially impaled effigies of pro-opposition foreign grant recipients on stakes.

Admittedly, foreign InterSeliger participants have always stood apart in the event’s colorful political history. Yet they have to live in an environment that does not always make sense to foreigners, but rather is intended to evoke patriotism among their Russian peers.

There is, for example, the natural granite tombstone signifying the burial of incandescent light bulbs — a reference to Russia’s transition to more eco-friendly, energy-efficient light bulbs.

Then there is the “White House” — the seat of the Russian government — which is made of plywood and stands on a finished floor at the forum. This has also caused a good deal of bewilderment among foreign participants, as it is not exactly Russia’s most well-known building.

Yet the word “Russia,” written in raised Cyrillic letters on the building and lined with mirrors, has become one of participants’ favorite targets for photographs, according to Instagram’s geotagging.

Selivanov believes that Seliger now fulfils the function formerly charged to Soviet universities in the past: educating young people from all over the world, who often go on to become leaders in their respective countries and implement policies friendly to Russia.

“We want our participants to return home and tell everyone, ‘Russia is awesome,’” Selivanov said. Judging by the enthusiastic comments from Seliger’s participants on social networks, this idea has come to fruition.