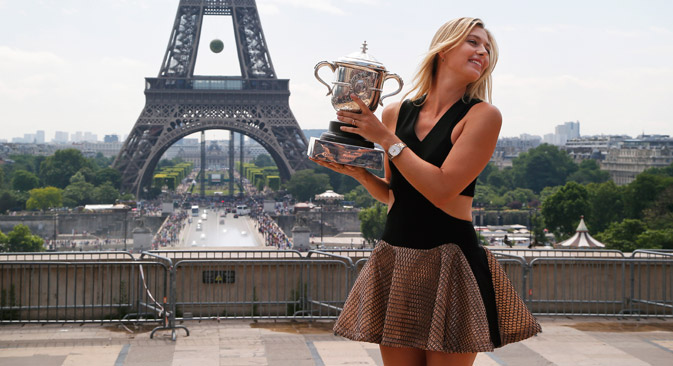 Maria Sharapova poses with her trophy near the Eiffel Tower in Paris a day after winning the women's singles final match during the French Open tennis tournament at the Roland Garros stadium in Paris, on June 8, 2014. Source: AP

Twenty-seven-year-old Maria Sharapova recently won her second Roland Garros and fifth Grand Slam of her career. With Wimbledon under way since June 23, Sharapova is Russia's only serious reason for hope at the championships. RBTH looks at five things about the tennis star that set her apart from her rivals.

Victory at the French Open sent Sharapova to second place in the list of history's top prizewinning women's tennis players. Having won $31 million on the court, the Russian star pulled ahead of American Venus Williams.

Venus' younger sister Serena, with prizes valued at $55 million, still stands between Maria and the top spot. To match such fabulous dividends, Sharapova would need to win 32 tournaments.

“When I see my contemporaries sitting in their expensive cars, I know that I myself earned enough for my own and am satisfied. Sometimes you feel these sidelong glances, when someone looks at you and thinks, ‘This spoiled doll probably got her Range Rover from her father.’ And I think back, ‘No my dear, I bought it myself,’” says Sharapova.

Sharapova does not follow coaches' plans and does not analyze her matches. The tennis star admits that this is a cause of much irritation for her trainers.

“Whatever we discussed before the match, I always come out on the court and play it my way. After the match my coach says, ‘Seriously? What do you even need me for?’ I will apologize to him, but next time I do it all over again,” says the star.

Sharapova’s disorganization was one of the reasons for the resignation of well-known Swedish specialist Thomas Högstedt, who could not tolerate his ward's capriciousness and left his post after three years of productive collaboration. American Jimmy Connors, the top player in the world from 1974-1976, became Sharapova's coach in August 2013.

“I cannot remember the last time I watched one of my matches all the way through. This isn't a particularly good thing, of course, and it upsets my coach,” says Sharapova. “He would be very happy if I were to sit and watch the match through, and learn some sort of lessons from it. But I only have enough patience for ten or 15 minutes. It's nice to watch your victories, of course, but in fact I don't particularly like to look backwards. All that can wait until retirement.”

“What was I writing down during the match? A shopping list, what else? I was, well, playing tennis out there, so it's probably not hard to guess that I was taking notes about the match.”

Sharapova dislikes interacting with journalists. Her frequent press conferences, active participation in the high life, and reporters' constant requests for interviews all make this evident. She tends to snap at members of the media and has been known to lose her temper altogether, as statements such as the following indicate:

“Guys, I understand that you are journalists, and that this is your job, but put away your notepads, your pens, your shout-meters [Maria's on-court screams can reach 105 decibels, equivalent to a jet engine -Editor’s note], forget about the fashion police, cease all this and watch the match from a fan's perspective. Forget about everything and just observe the match. It seems to me that afterwards some interesting questions will appear.”

Sharapova, who became a UN goodwill ambassador in February 2007, uses her fame to draw attention to urgent global problems. The tennis star is most concerned by the shortage of potable water in Africa, addiction to narcotics in developing countries, and the preservation of natural resources. By Sharapova's own admission, her first press conference at the UN was one of the most stressful situations of her career.

“I was constantly drenched in a cold sweat! Let's just say that it wasn't the usual 'how is your forehand stroke today'!” she says. “One journalist asked me, ‘What should people do so that there won't be any more war or poverty?’ Unexpectedly for myself, I would have gladly started talking about my forehand.”

Sharapova was born in the small Siberian city of Nyagan, in the Khanty-Mansi Autonomous Area, near the Ob River.

Although she spends most of each year on the move, the tennis star stresses that she is proud of her roots.

“I am very proud to have been born in Siberia. It can be very amusing to hear myself announced on the court, when they don't say ‘born in Russia,’ but ‘born in Nyagan, Siberia.’ And every time this chorus of ‘wow!’ rolls around the bleachers. That is, it's news to them; it surprises them, and in such moments I feel just as proud of that as I am of having won the Roland Garros, of being ranked number one in the world.”