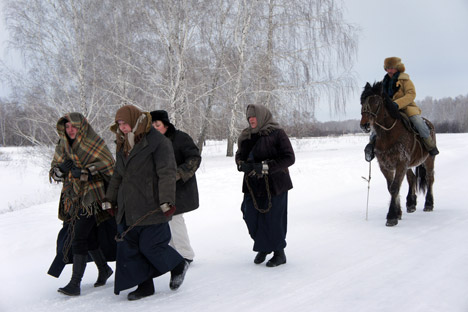 In 2013, the prisoners who make their way along the tract do not have to do so for long. If they start feeling the cold, they can slip off the manacles and hop into a car to warm up. Source: Irina Buzinets

The history of Siberia’s great chain-gang tract is being restored for tourists and surrounding villages.

Tourists who make their way to Bolshie Uki — a small village swallowed deep in the Siberian taiga forests — can go to a 19th-century prison, try local food prepared by traditional recipes, gather cranberries in the marshes, or go swimming in glistening pure rivers, while enjoying all of civilization’s comforts.

The road is around 300 kilometres (186 miles) from Omsk to Bolshie Uki, and the half-way mark is deserted wilderness — no sign of modern buildings or dwellings anywhere. Even the radio can’t pick up a signal. In the winter, there is an endless vista of snow and barely distinguishable groves of birch-trees as far as the eyes can see — a view that turns to verdant green in the summer.

The museum at Bolshie Uki was opened 22 years ago. Today it is located with the library in a large, two-story building. The excursion around the museum lasts four hours. As well as the story of the Great Siberian Tract, there are displays about the conditions of local life over past centuries; organizers plan to open a new section about the Decembrist plotters of 1825. The museum has its own chapel with old icons that settlers brought with them when they came to Siberia.

The feeling of paradise is broken by sharply biting winds or sharply biting insects, according to season. However, those who are intent on getting to know Siberia can hardly avoid the cold and mosquitoes.

For several centuries, a weekly flow of hundreds of convicts passed along this stretch of the Great Siberian Tract past Bolshie Uki — the longest road anywhere in the world, running for nearly 10,000 kilometres (6,213 miles). It was a route also followed by expeditions, travelers and the residents of Russia’s distant, interior world.

In the 18th century, indentured serfs were to be found among the convicts — those who had joined the rebellion led by Yemelyan Pugachev. Some two decades later, the same route to penal servitude was followed by noblemen — participants in the failed Decembrist Revolt of 1825. In the footsteps of these noblemen came their wives — countesses and princesses who defied convention and followed their husbands voluntarily to Siberian exile.

View Touring the Siberian chain-gang route in a larger map

In 2013, the prisoners who make their way along the tract do not have to do so for long. If they start feeling the cold, they can slip off the manacles and hop into a car to warm up.

“Eighteen kilometres of the Moscow-Siberian Tract are preserved only here. Movement along the Tract has never ceased in 300 years. Yet there is much more to the Tract’s history than chain-gangs. The Postal Service and the development of manufacturing feature too. The quality of local butter was so high that Danish merchants bought it up and labeled it ‘Danish butter.’

Demistifying the life of Grigory Rasputin

The area is known for many local trades. We decided to start by promoting the chain-gangs only because the grim history of Siberian exile provokes emotional interest. In Bolshie Uki, the interest in Siberian penal convicts is only the very beginning of bringing the history of these remote villages to life — living examples of the cultural legacy of the past,” writes Yevgeny Zenzin, the director of the Bolsheukovsky Historical and Cultural Museum of the Moscow-Siberian Tract.

Yevgeny Zenzin was born in the nearby village of Stanovka. He comes from a family whose members were once sent to Siberia for participating in the Peasant Revolt. After finishing university in Omsk, Yevgeny decided to go back to his village. However, his hometown of Stanovka, along with its adjacent fortress of Forpost (where the young historian Yevgeny became a history teacher and later the headmaster), was quickly falling into decay.

Local farming closed down and people moved away to the city — or at least to within easier reach of it. Yet Bolsheusky District was transformed into an ecologically sustainable area when local industries closed down: human activities no longer caused detrimental effects on the virgin pastoral environment. Fate had stepped in to create the conditions for ecologically sustainable tourism in the area.

Yevgeny Zenzin describes the region: “In June we’ve got wild strawberries ripening in the woods — and so many kinds of mushrooms! We’ve got cèpes, porcinis, chanterelles, butter mushrooms, red mushrooms, trompettes; Siberians really like mushrooms, and have their own recipes for them. July is packed with different berries — brambleberries, strawberries, blackcurrants, redcurrants, and raspberries.”

“Summer is a time when you can go swimming in our beautiful lakes and rivers, and there’s excellent fishing too. In August and September people begin gathering different berries — sour cherry, hawthorn, currants, viburnum. Our region is well-known for ryamovy [moorland and bogs] berries, as well as cranberries and blueberries,” says Zenzin.

When visitors reach the old road, where the only thing to see are striped milestone posts along which the convicts used to marched, it is easy to believe that it is still the 19th century. Credit: Irina Buzinets

When visitors reach the old road, where the only thing to see are striped milestone posts along which the convicts used to marched, it is easy to believe that it is still the 19th century. Tourists can trudge this section of the chain-gang route for themselves, try on the handcuffs and hear the shouting of the guards. After their experiences, they receive a certificate confirming that they “truly marched along the Moscow-Siberia Tract — a route followed by great scientists, travelers and convicts alike.”

The conquest of Siberia. Originally published by Johannes Schenn

Tourists are also able to see the historic re-enactments, visit the museum, see a section of a prison cell surviving from the 19th century, see a convict’s uniform with an ace-of-diamonds pattern on the back (to make it easier for guards to spot runaways) and authentic chain-gang manacles. The manacles weigh 11 pounds! The ones used for modern re-enactments are made of tin.

Zenzin recalls how one history enthusiast who saw the reconstructed manacles wanted to experience being a convict himself. He remained manacled until evening and went out to get his supper at a roadside cafe while still in chains.

The journey from Omsk to Bolshie Uki takes 4–5 hours on a local minibus service, with fares staring at 400 rubles ($13). Accommodation in village hotels starts at 300 rubles ($10). Tourists interested in staying in local wooden cottages for as low as 500 rubles ($16) per night can contact local host families — Valentina Stepanova, Valentina Rybina, Alexander Isaev, Alla Denisova, Antonida Poloukhina — via the museum contact details. There is a village Russian Baths and organically grown, local produce (milk, sour cream, butter, meat, lard, eggs, vegetables and so on), with prices starting at 100 rubles ($3.25). The area has mobile phone connectivity on networks operated by the Russian operators Beeline, MTS, Megafon and Tele-2.