A trip in search of harmony: Ecotourism near Gelendzhik 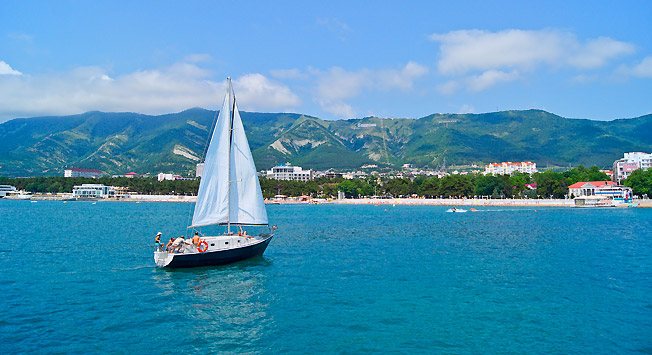 Shutterstock/Legion-Media
Gelendzhik is located in Russia’s warm underbelly 1,246 kilometers from Moscow. It is an ecologically clean town without a large port or industrial plants to spoil the surrounding nature. People come here to see the Black Sea with its horseshoe-shaped bays surrounded by the Caucasus Mountains.

There is so much to see and do here: Curative mud baths, mineral springs, the air filled with the scent of conifer trees, rare animal species, mountain walks, laidback beach days and diving to the depths of the sea. In order to enjoy everything in Gelendzhik you need a plan. RBTH has prepared three possible itineraries for travelers to choose from.

Route 1: Slim down at the sea’s edge and get inspired

Photo credit: Lori/Legion-Media
Golubaya Bezdna, located 20 minutes from Gelendzhik, is a favorite spot among ecotourists and is often nicknamed the “Russian Eden” by locals. Near the coast there are many camp areas. If you set up a tent here be prepared to be active. Just getting down to the sea will burn calories: to get to the sea you have to go down a steep path cut into the cliff with the aid of an iron rope. Golubaya Bezdna greets the Black Sea air with the scent of old conifers. Here you can wake up in the forest to the sound of the sea, swim with dolphins near the shore, run through waterfalls and stop off at picturesque mountain terraces. Given the isolated and wild nature of this place, don’t be surprised if you run into a few nudists.

Photo credit: Lori/Legion-Media
Famous Russian short-story writer Vladimir Korolenko’s museum is located next to Golubaya Bezdna in a wooden gorge that leads to the sea on the slopes of St. Nina’s Mountain. The house was built at the beginning of the 20th century based on the writer’s plans and included his participation. How the house on the mountain was realized is unique and creative. Nearby caves were used as iceboxes for storing food and wine and the multi-level rooms housed residents, guests and servants. There is also a beautiful garden, as well as magnificently carved balconies and staircases. There used to be legends among the locals about the generosity of the landlord. Korolenko supposedly offered so much wine to visitors arriving by ferry from Gelendzhik that the boat was called the “drunk” ferry when returning.

Photo credit: Lori/Legion-Media
This, the most famous natural monument in Gelendzhik, is an ideal place to take a short walk at the sea. This rock, which looks like a sail, was once connected to the coast, but the sea little by little has pushed it back from the mainland. According to legend, a hole in the rock comes from a mountain artillery cannon from one of the 19th Caucasian Wars. You can get here by bus or by taxi, but the best way is to reach it by sea on a motorboat from Gelendzhik’s central pier.

Route 2: Reflect on life and lie on the beach

Photo credit: Lori/Legion-Media
The White Horse Art Gallery features works of art made from recycled materials, mainly refuse, old objects and plastic plates. The museum’s mission is to draw visitor’s attention to ecological issues and stimulate them to create something both beautiful and good for the environment. This gallery of modern art has an active schedule with contests, rotating exhibitions, festivals and master-classes.

The Old Lighthouse and Lermontov Boulevard

Photo credit: Lori/Legion-Media
As punishment for writing the poem “Death of a Poet,” which irritated Tsar Nicholas I, Mikhail Lermontov was assigned to an active army regiment and supposedly arrived in Gelendzhik from St. Petersburg in September 1837. The same route was followed by one of his literary characters, Grigory Pechorin, the protagonist of his most famous work, “A Hero of our Time.” A monument to Lermontov has been erected in Gelendzhik near the bay’s shore. The pedestrian embankment, which begins here and continues northwest along the bay is named Lermontov Boulevard.

Directly on the boulevard is an elegant art nouveau lighthouse with stained glass windows. The oldest lighthouse of the Black Sea coast was built here at the end of he 19th century and has since been restored just once in 1927, when its kerosene lamp was replaced by an electric lamp socket. All this time the 13-meter white tower has been preserved in perfect condition and its red and green light has been quietly showing the way to ships for more than a century.

Photo credit: Lori/Legion-Media
Divnomorskoye is an easy-to-reach resort 10 kilometers from Gelendhzik and attracts many visitors. Some have also called this area the “false Gelendzhik.” Historians say that such a nickname may have come about in the 19th century, when ship captains sailing in the dark would spot lights and would mistake it for Gelendzhik Bay and cast anchor here. A slightly sloping coast, clean pebble beaches and sandy sea floors attract both families with children and divers.

Route 3: Learn the secret of the dolmens and pass the endurance test

Photo credit: Lori/Legion-Media
The best way to start your day in Gelendzhik is to take a walk to get to know the works of ancient art of the area in the “Shirokaya Shchel” (Wide Slot) rural area. Located about 10 kilometers east of Gelendzhik, here there are many stone constructions 2-3 meters high called dolmens. Dolmens are works of art that are thousands of years old and are a means to initiate contact with other worlds according to legend. These are the most ancient manmade constructions in the Northern Caucasus. There are also some beautiful rocks about seven meters high and if you’re willing to walk for a while you will eventually bump into more dolmens on Mount Neksis. In the Caucasus dolmens were discovered by Russian officers during World War I, but scientists only recently began studying them seriously. Here, near the River Shebs take a walk to see dozens of nearby waterfalls or try the 700-meter climb to the top of the Kotsekhur rocky range.

The River Zhane
In the same direction from Gelendzhik is a physically demanding hike. It’s not too difficult, but it will test your endurance. Most people come here from the village of Vozrozhdenie and then reach the mountains on foot. Travelers will find the most beautiful view 3.5-kilometers later along the road through the red southern forest. The Emerald Waterfall is here and according to locals, bathing in its cold waters will give you good health for an entire year. Along the banks of the River Zhane, which flows here, you can also look for ancient cemeteries, million-year-old fossils of prehistoric sea-dwelling animals and the megalithic monument known as “Stone Heart,” which resembles a broken balloon.

The Kuago Waterfall
Another eco-friendly sight in the same direction from Gelendzhik is a series of waterfalls called Kuago. A slow walk to the waterfalls is recommended, particularly for travelers that have been hiking all day. On a walk here visitors will be treated to views of six waterfalls, a mountain gorge and a river containing rapids.