Lake Baikal in winter: An ice-cold trip to the legendary Siberian lake 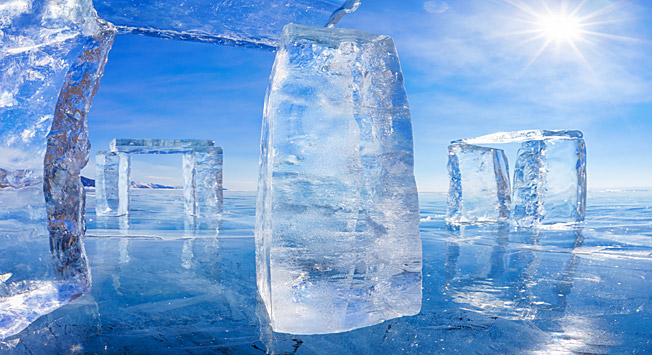 Lori/Legion-Media
Fantastic grottoes on the shore, jeep or ice skating tours, ice fishing and reassuring quiet: these are only some of the joys that make a trip to Lake Baikal in winter worthwhile.

Winter is probably the best time of year to go and discover the spirit of Lake Baikal. This is especially true in February and March, when the lake's surface is frozen solid and the temperatures are subzero. At the same time the air is dry and the skies are surprisingly sunny. Probably the best part about coming here in winter is that unlike in summer, you can enjoy the quiet without being overwhelmed by crowds of tourists.

Ice as a miracle 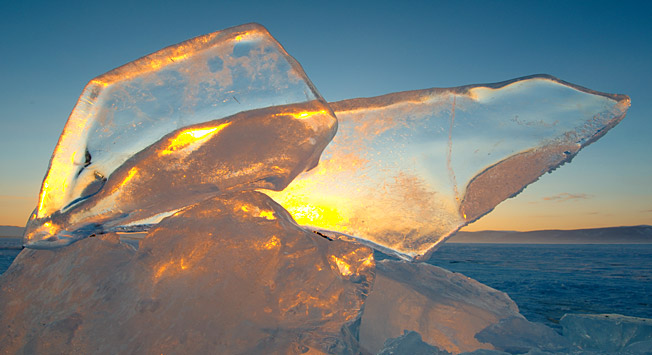 Deep blue, inky and interspersed with innumerable air bubbles whose color is sparkling blue or blindingly white: Such is the ice of Baikal. Whatever its color, it is always extraordinarily pure and transparent like a freshly polished window. From late January to the end of April the legendary lake is solidly frozen and is the main natural sight of the Irktusk Region. 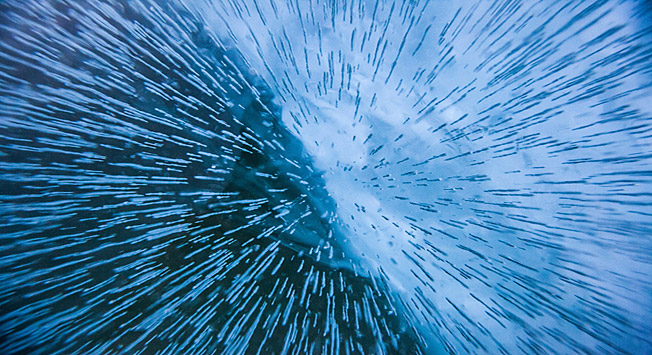 The ice of Baikal, whose thickness can reach 1.5 meters, does not have a uniformly even surface. There are also large slabs and huge blocks of ice that can reach 12 meters in height and resemble rock crystals; sokui, which are natural ice sculptures that form on cliffs and rocks surrounding the lake; and the so-called ice crevices, which can be 10-30 kilometers long and up to three meters wide. When such formations are taking shape, the lake emits a sharp and thunderous crack.

Generally speaking, Baikal in winter is similar to a prehistoric animal who has fallen asleep, but from time to time sighs, emitting unusual sounds. You can try to domesticate it, but it's still best to be careful. 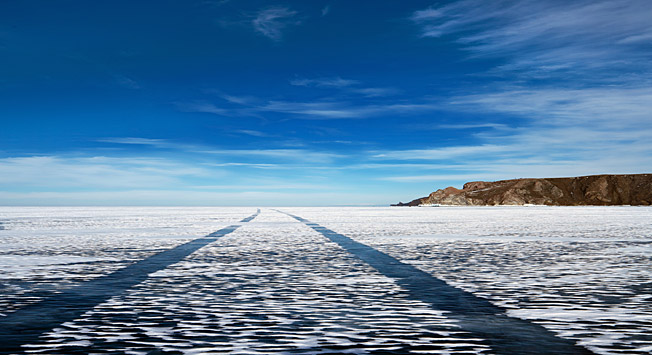 In winter you can travel around Baikal in numerous ways, but car tours are the most popular. Of course, cars are a comfortable and warm means of transport, but they also allow tourists to reach many areas of the lake and admire the rocks and the amazing ice grottoes.

Both local inhabitants and seasoned travelers advise inexperienced drivers against taking their own car for a jaunt across the frozen surface. On the Irkutsk side of the lake there is only one route that has been officially opened by the local Ministry of Civil Defense and Emergency Situations, which leads to Olkhon Island. 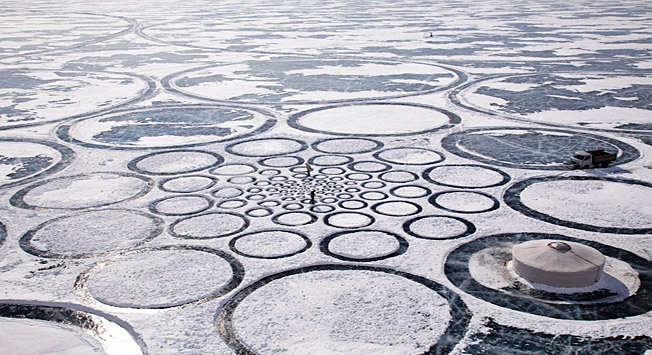 All other routes along Baikal are considered dangerous because of cracks and slabs of ice. Therefore, the safest and most reliable way is to organize a trip through a travel agency (including fishing, a dog sleigh ride and a sauna) or to hire a car with an experienced driver and guide. The best places for a trip are to Olkhon Island, the Small Sea Strait and the shores. 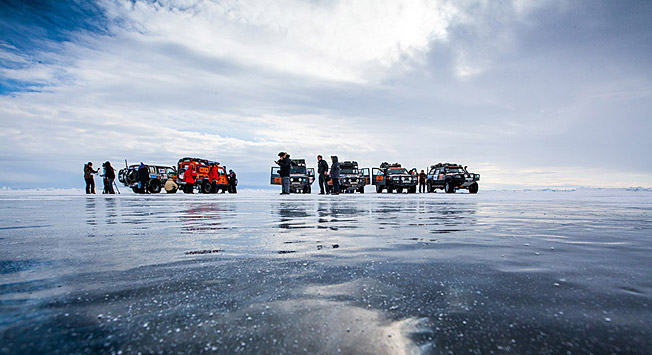 Baikal in winter is also a wonderful natural ice rink, with a slippery and uniform surface (in places). For ice skating and other winter sports including quadricycle rides, skiing or ice fishing tourists often go to Listvyanka, where the ice is smoothed over along the shore. Many tour bases also try to set up ice rinks for families on their section of the Baikal shore. Lovers of challenging independent travel such as Danila Korzhonov, who covered 400 kilometers on ice skates sometimes walk along the entirety of the lake. This, of course, is not for everyone and requires professional training, experience and boldness. Yet, it's guaranteed to be an absolutely unique Siberian adventure.

A view of Baikal from a screen

If this winter you can't set out to discover the legendary Siberian lake that sleeps under the ice, you can still make a virtual visit through the "Lake Baikal in Winter" tour:

This tour includes 23 high-definition spherical panoramas of Baikal taken from a bird's eye view for AirPiano, a non-profit project run by a team of photographers from Russia and established with the support of the Russian Geographical Society.

Without moving away from your computer screen, you'll be able to see the aerial landscapes of the Khoby and Budun promontories on Olkhon Island and the Olkhon Gates Strait, the Ogoy Island with its Buddhist stupa, the Baikal sunset in the village of Bolshie Koty and ice webs on its surface. However, even the most professional photographers and the widest angle of observation cannot be compared to an actual visit to Baikal, which waits for travelers from all over the world in both winter and in summer.

A visit to Baikal traditionally begins at Irkutsk, which can be reached either by train, along the Trans-Siberian railway, or by plane: There are many daily flights to and from Moscow, with less frequent service to St. Petersburg, Vladivostok, Novosibirsk and other major Russian cities.

In most cases it's probably best to organize a trip on frozen Baikal with the help of a tourist agency. The prices vary depending on the difficulty of the route and the activities included. For example, a two-day car trip with a guide on Olkhon Island may cost 10,000-12,000 rubles ($155-$185), while a week on an island could cost as much as 25,000 rubles ($385). The prices for the more difficult one-week jeep tours, which also include snowmobiles and dog sleighs, start at 50,000 rubles ($770).