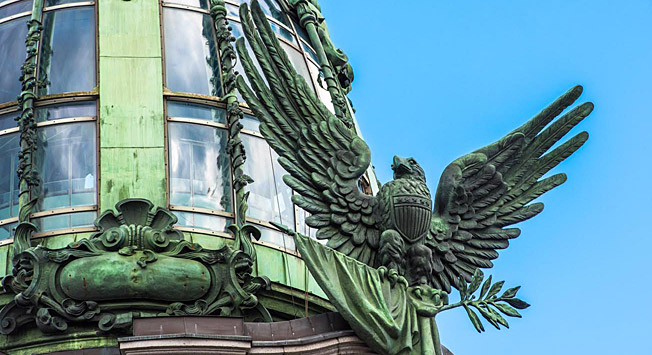 Marina Mironova for RBTH
St. Petersburg likes foreigners. The city's history is thick with foreign names. The European side of Russia's northern capital is well known to tourists. But what do you know about American Petersburg?

RBTH composed three extraordinary American walks in St. Petersburg, where you will encounter the sixth U.S. president, learn about the construction of the main railroad in Russia and find out what St. Petersburg has in common with New Orleans.

Ambassadorial route
During its more than 200-year history of diplomatic ties (the anniversary was celebrated in 2009) American ambassadors and consuls have lived in official residences in different places throughout the city. Thus we can draw a “diplomatic” route on the map of St. Petersburg.

The walk begins at Saint Isaac's Square. Here at the Moika River Embankment is where the first U.S. ambassador to Russia lived. In his homeland he is also known as the sixth U.S. president, John Quincy Adams. In his honor Moika Embankment 66 bears a memorial tablet with a text in English and Russian.

If only he had lived there a bit later, Adams would have been able to enjoy the view of Saint Isaac’s Cathedral from his apartment window. The magnificent dome of this building inspired Thomas Walter, the architect of the U.S. Capitol building in Washington, which was built according to the drawings by Frenchman Auguste de Montferrand, the designer of this cathedral. 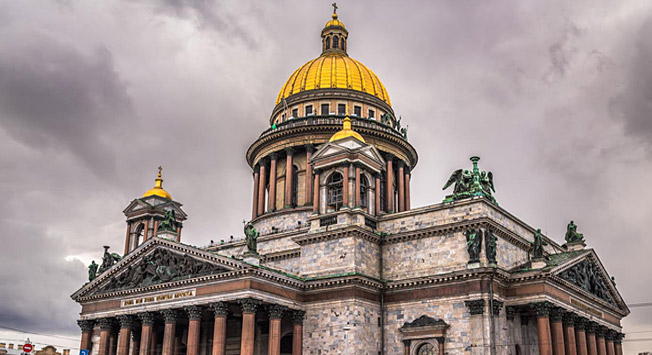 From Saint Isaac’s Square American ambassadors (and other foreign dignitaries) moved to the English Embankment (Angliiskaya Naberezhnaya) in the 19th century. This embankment was so named because in the city’s early days wealthy British merchants used to build their houses here.

Going past the ambassadors' mansions without noticing them is impossible. The entrance to English Embankment 28, where the U.S. Embassy was located in the late 19th and early 20th centuries is now marked by rose petals and brides posing in front of wedding photographers. The first wedding registration palace (ZAGS) in the country has been operating here since 1959. 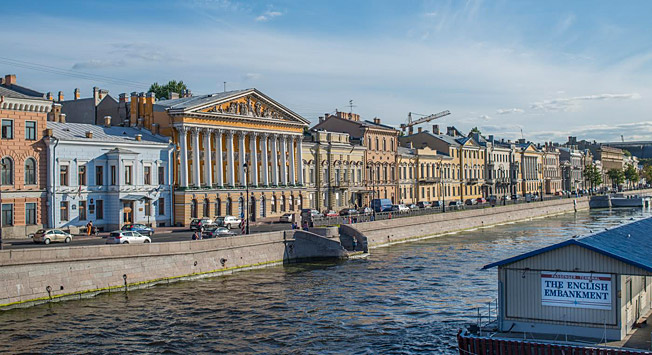 After the Neva embankment the route continues along Nevsky Prospect to the most American building in St. Petersburg, an Art Nouveau building with a huge bronze “American” eagle on its foreside. Dom Knigi (House of Books), St. Petersburg's central bookstore, is one of the city's primary architectural and cultural landmarks. This is the former main office of the American manufacturing company Singer, famous worldwide for its sewing machines. If not for city construction regulations that have historically limited the height of buildings in the center, this might have become the first Russian skyscraper. Based on the building’s original plans, they considered going up to 11 stories using a metal “carcass,” which was a cutting-edge technology at the time. This would have made the Singer building St. Petersburg's tallest. 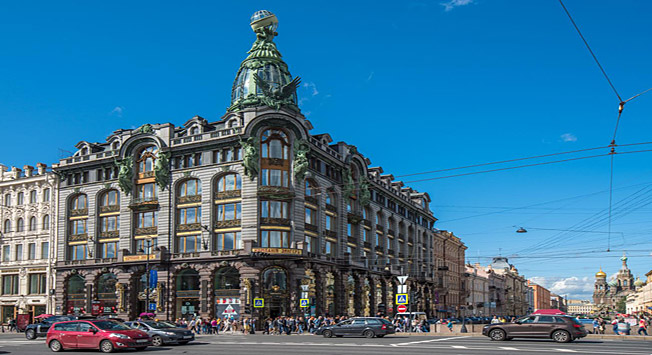 In the mid-1910s Singer's company gave part of their premises to the American Embassy. Some people associated Singer with Germany (although he was American born), so this was done as a result of the rising anti-German attitudes held by Russian society during World War I.

It is a 30-minute walk from the Singer building to the present-day American Consulate, however, there was no American consular general in Soviet Leningrad for 53 years (1919–1972).

The cozy streets and elegant 19th-century buildings – in a part of the city historically called Liteinaya – have welcomed the American diplomatic mission since 1972. At Grodnensky Pereulok 4 is the official residence of the U.S. Consul General. This building often opens its doors to the public for special events, film screenings and lectures. Information about upcoming events can be found on the Consulate’s pages on social media.

This walk finishes at the respectable mansion (built in 1897) marked by the American flag and coat of arms at 15 Furshtatskaya ul. This building houses the offices of the U.S. Consulate General in St. Petersburg. 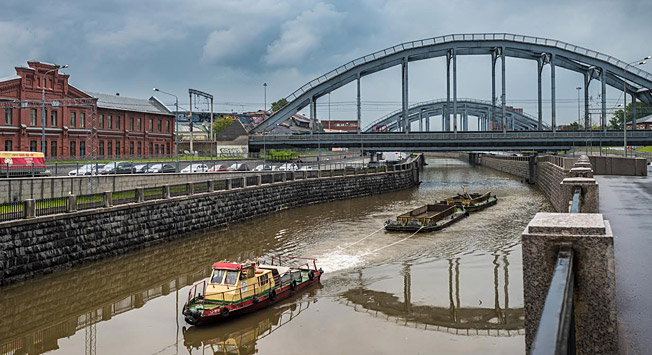 Photo credit: Marina Mironova for RBTH
Technology was a key word in pre-revolutionary Petersburg and the U.S. in the 19th century. The two countries were building up their industrial muscles simultaneously. In this respect America was more flexible than Russia due to its political system, while the latter country was held back by its bureaucratic inertness. To keep up Russia actively invited experienced professionals from across the ocean.

In 1842 Tsar Nicholas I invited American engineer George Whistler as the head consultant for the construction of Russia’s first intercity railroad between St. Petersburg and Moscow. This opened a new era in Russia's development.

Although Whistler is not mentioned on a memorial tablet dedicated to the railway’s builders at the Moscow train station, the memory of this engineer is alive and well in the city. If you walk from Moscow station to Obvodny Canal, you will see a series of refined metal bridges. These bridges were built by Whistler based on the project of fellow American engineer William Gau. They were nicknamed the American bridges, and in 2008 this nickname became their official name.

From here the route dives back underground. Inside the metro station Obvodny Canal you can see what industrial St. Petersburg looked like in the late 19th century. Inside the station there is a 300-meter-long panorama demonstrating the main enterprises located at the former industrial border of the city. Obvodny Canal used to mark that border. 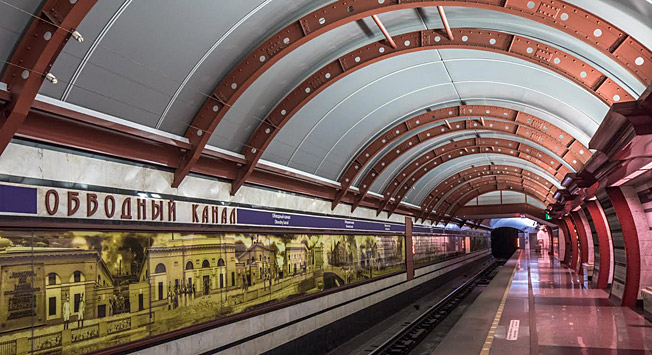 Come up to the city in the industrial district at Baltiiskaya metro station. We are about to take a trip around the gigantic territory of the factory Krasny Treugolnik (Red Triangle), which was known as the Russian-American Rubber Manufacture Association, founded in 1859.

This building once housed a gigantic galosh empire that was producing 282 million pairs of galoshes by the beginning of the 20th century. It occupies a territory almost twice as big as Moscow’s Kremlin and looks equally imposing.

The factory went bankrupt in 2002 and today the territory is an unusual tourist destination. Today the abandoned plant is a ghost town where films about World War II are shot, informal concerts are played and art exhibitions and urban explorations are popular diversions. 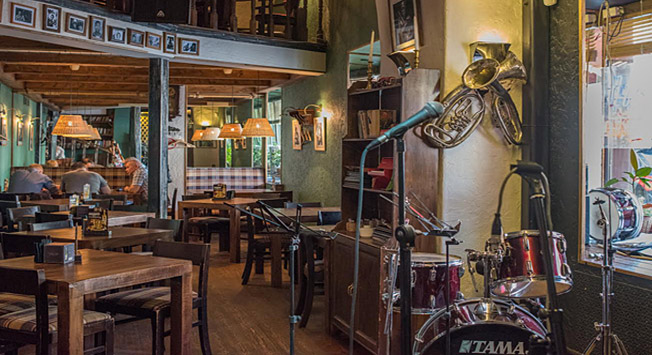 Photo credit: Marina Mironova for RBTH
For its passion for jazz St. Petersburg is sometimes compared to New Orleans. Jazz traditions are stronger here than in any other Russian city. The first jazz club in the USSR, called D-58, emerged in Leningrad. The only philharmonic jazz hall in Russia is here. On a summer night it’s fun to take a rhythmic walk around the city's best jazz clubs.

Choosing where to start depends on your musical preferences. “Serious” classical jazz in the Soviet Leningrad tradition is played at the Jazz Philharmonic Hall at 27 Zagorodny Prospect. Concerts begin at 19:00 .

The Jazz Boat departs from 32 Dvortsovaya Naberezhnaya at the same hour (19:00). A jazzy cruise has been in operation here since 1967 when the head of the local jazz club Kvadrat began organizing trips on the Neva River. The hired musicians recharge the public with swing and Dixieland while the breeze off the Neva keeps everyone cool.

At 20:00 the music starts at JFC Club where there are no barriers between the stage and the audience. Here you can have a friendly chat with iconic American and Russian musicians who come to play here at the invitation of famed jazz composer and the club’s director, Andrei Kondakov.

After 22:00 the public, as well as jazz musicians, relocate to The Hat and Dom 7 where they play relaxed jam sessions until the last visitor leaves. These jazz clubs provide a contrast of pure improvisation against the background of Petersburg’s endless nights. There are no standards or rules here and all nationalities are welcome. It is anything goes – Petersburg-style.