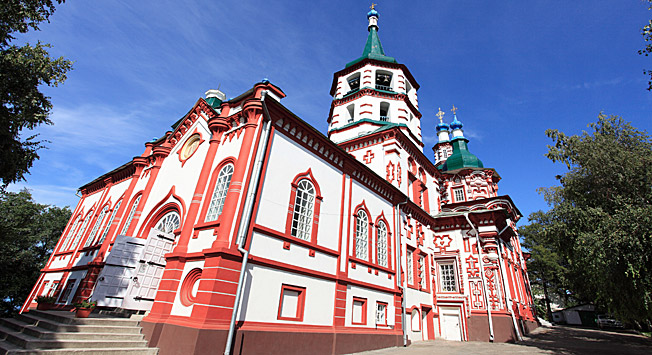 Alamy/Legion-Media
Irkutsk (population 587,891) is the major tourist hub for those traveling to Lake Baikal, but it is also an authentic architectural treasure trove that features churches designed in the distinct style of Siberian Baroque.

Foreign travelers to Russia often get to know the monuments of Russian baroque in Russia’s biggest cities: the Smolny Cathedral and Kunstkamera in St. Petersburg or Rastrelli’s masterpieces in Moscow. Yet few know about a unique variety of this architectural style that can be found exclusively in Russia: Siberian Baroque. A visit to Lake Baikal is incomplete without a day walking around Irkutsk (4,200 kilometers from Moscow), where this local architectural style stands out for its ornate designs and sophistication.

See Siberian baroque churches of Irkutsk in a larger map 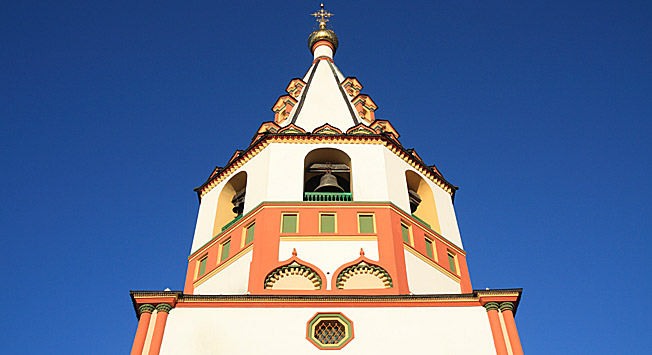 The Cathedral of the Epiphany in Irkutsk, Siberia. Photo credit: Shutterstock/Legion-Media
The term Siberian Baroque generally defines Siberian church architecture of the 18th century, when such structures began to be built in wood, as well as stone. This style is noted for its domes with unusual profiles, fantasy and grace in the execution of the decoration’s details, skillfully patterned cornices and “stone lace.” As early as the 19th  century, architects and art historians began attributing the local regional Baroque and its elements to a distinct school.

The term “Siberian Baroque” gained currency at the beginning of the 20th century, after a presentation by Irkutsk historian D.A. Boldyrev-Kazarin, who maintained that were traits of a “purely Asian exoticism” in the extravagant local church architecture there. The uniqueness of Siberian Baroque consists in that while it has similarities with the architecture of the Russian North, it also developed with Ukrainian and local influences such as Buddhist styles of Far Eastern Russia and Tatar and Bukhari forms in western Siberia. Beginning in the 18th century, a time when more roads were being built in Siberia and Irkutsk was actively trading with Mongolia and China, this multicultural architectural form came into being as a marriage of European and Asian styles beyond the Urals. 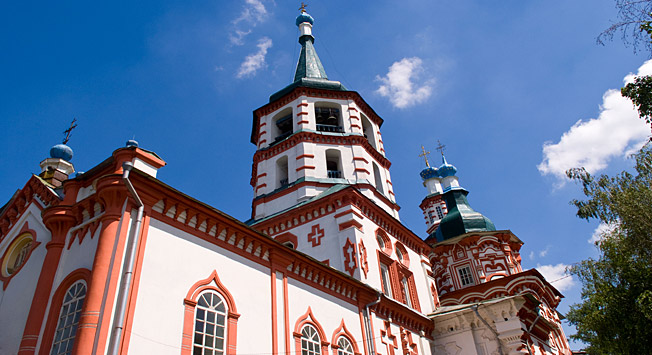 The Church of the Holy Cross in Irkutsk, Siberia. Photo credit: Alamy/Legion-Media
An authentic masterpiece of Siberian Baroque, both in local terms and across Siberia, is the Feast of the Holy Cross Church (ul. Sedova 1). Featuring decorations composed of intricately patterned designs, it is also one of the oldest Orthodox churches in Irkutsk: the city chronicle says that it was built at the beginning of the 18th  century at the feet of Mount Krestovaya. Travelers will note that the Holy Cross Church’s beauty lies not only in the contrast between the pure white and the bright red of the bricks, but also in the association of volumes and heights in the interior of the temple. Depending on where a visitor looks up inside the building, it will offer them different impressions of its architectural composition. Architects have noted that the church is similar to a Buddhist temple (stupa).

The church’s interiors preserve a treasure of its own: an 18th-century iconostasis with a refined ornamental carving and old icons. In Siberia this is quite rare as in Soviet times church buildings were used as warehouses and as a result frequently lost their original look. Yet another architectural gem here is the façade’s original and intricate decoration. The Soviet artist and art historian Igor Grabar wrote that in the decoration of the external walls of the Feast of the Holy Cross Church “a naïve association of echoes from Moscow and Ukraine is extravagantly intertwined in a thick ornamental carpet with its own unique Eastern flavor.” 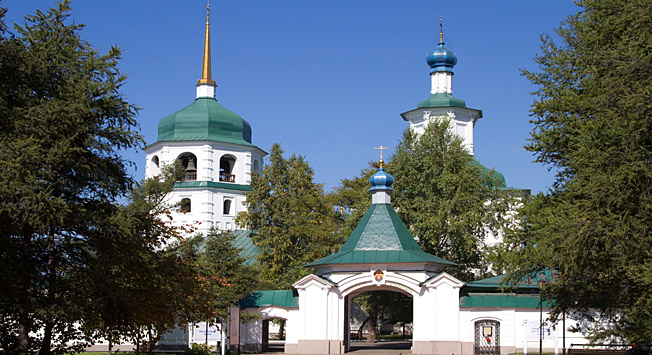 This architectural monument is popular among locals as it is next to the necropolis where many members of the Decembrist revolt were buried. It is also here that Princess Trubetskaya, the wife of Prince Sergei Trubetskoi, one of the Decembrists’ leaders, is buried along with her children. She was the first Decembrist wife to follow her husband into exile, sparking a trend among revolutionary families. There is also a monument to Admiral Alexander Kolchak, the leader of the White movement during the Russian Civil War here.

Another must-see Siberian Baroque structure is the Trinity Church (ul. 5-i Armii 8), built in 1778 and still untouched. It brings Siberian Baroque together with ancient Russian architecture, as well as local traditions of window construction. Yet another example of this style is the 1775 Vladimir Church (ul. Kashtakovskaya 58), which features a more concerted dedication to local Baroque artistic traditions than others; this is visible in its bas-relief and staff bead.

Throughout Siberia there are many other interesting monuments of Siberian Baroque: the Church of Zachary and Elizabeth in Tobolsk, the Resurrection Church in Tomsk, the Assumption Church in Yeniseysk and the Hodegetria Cathedral in Ulan-Ude. However, nowhere is their concentration greater than Irkutsk.

You can reach Irkutsk from Moscow and St. Petersburg either by plane (there are daily flights) or by train along the Trans-Siberian railway. Tours can be booked at the Irkutsk Baikal Travel agency. English-language excursions should be reserved in advance.