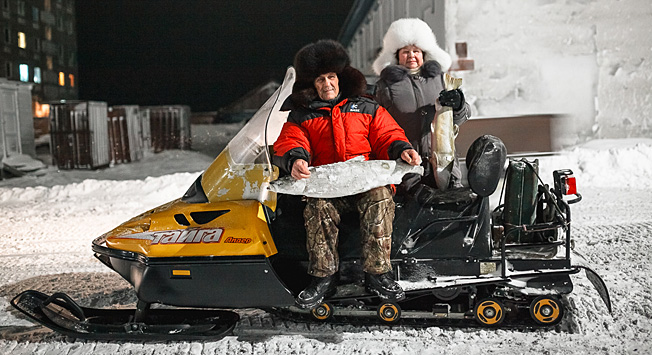 Anton Petrov
The Russian North features many towns where conditions are extreme and extraordinary. The "Siberia: Joining the Dots" project team – journalist Anna Gruzdeva and photographer Anton Petrov – went to Dikson, the USSR’s former "Arctic capital," to check out life there.

Day 1
Our taxi rushed from Norilsk to the Alykel Airport across the lethargic December tundra. However, we could barely make out the tundra or the small towns we passed along the way – the Arctic Region had been swallowed by the polar night. All we could see was the fleeting snowdrifts clinging to the road in the flickering beams of headlights. Our plane to Dikson was delayed for a day due to "unfavorable weather conditions."

"We've been waiting for a plane for a fortnight already,” said a woman at the check-in counter. “Some have stayed at their relatives', and some have gone to hotels. But the blizzard will fade away, you just need to be patient."

It was then that we noticed people from Dikson at the airport. The major difference between them and the "mainland" folks was a Nordic serenity and extraordinary patience: For the sun, for the fish to spawn, for food to be brought to the shops or for a plane.

Day 2
Dikson is a small town located in the north of the Krasnoyarsk Territory on the shores of the Kara Sea. Compared to its neighbor Norilsk, it's a tiny settlement with a population slightly exceeding 600.

Dikson is a truly extreme destination. Its signature tourist attractions include winter temperatures fluctuating around -30°C (-22°F), 2G internet connections, austere stilt houses, ubiquitous off-road vehicles and the morose ice-clad sea bordering the tundra wilderness, which is uninhabited even by indigenous peoples and impassible by any transport with the exception of the weekly plane. However, in Soviet times it boasted that it was the "capital of the Arctic."

Mikhail and Zinaida Degtyarev, a family engaged in fishing and hunting, moved to Dikson from Belarus during the settlement's golden age to work at a local fish factory. As Mikhail puts it, he and his spouse "have been roaming the tundra for 53 years."

From the 1960s-1980s, this part of the Arctic was densely inhabited by winter residents who engaged in state-regulated activities including hunting mink and ringed seals and fishing. The Degtyarevs have a winter camp where they spend most of their time. They occasionally visit the settlement. But after the Soviet Union collapsed, Mikhail and Zinaida had to turn to private entrepreneurship, and now they are among the few Dikson residents still engaged in fishing: they catch valuable types of fish, such as broad whitefish, vendace, muksun, nelma and Arctic cisco, and send it to the "mainland."

Day 3
"Are you sure you want to go? No one is going to walk you around the island, it's a completely wild terrain and there may even be some polar bears out there."

These were the words of welcome spoken to me by officials of the local administration. But we were quite sure what we wanted, so we put on our balaclavas, felt boots and fleece gloves and jumped into an off-roader.

Dikson is an island settlement. Back in the Soviet days, it had horses, a cow shed, a cinema, a video rental shop, a restaurant, a bakery and a number of other facilities. When newcomers arrived they would have to stand in line for a room at a state-owned residence. Today the island is almost barren, instead resembling something like a Hollywood setting for an epic thriller in the Arctic. The only illuminated and manned facilities are the small weather station and the tiny airport, which functions once a week at the most when the weather cooperates. There are many abandoned buildings.

In order to have a better look at the sleeping island, we grabbed our flashlights, but they weren't very useful. On Dikson Island you come to realize what a polar night really is. It's not the bluish twilight you see a bit farther south in Norilsk or Dudinka – it's pitch-black, the color of ink. Your eyes can't see the horizon, not even a distant silhouette, your brain doesn't understand whether it is time to wake up or go to sleep, and your body physically feels the proximity of the North Pole: it seems you are in the point of space where all the parallels and meridians converge and the familiar lapse of time comes to an end.

You can read the full report on Dikson and its residents at the "Siberia: Joining the Dots"