The Trinity Cathedral at Ipatiev Monastery: Witness to history 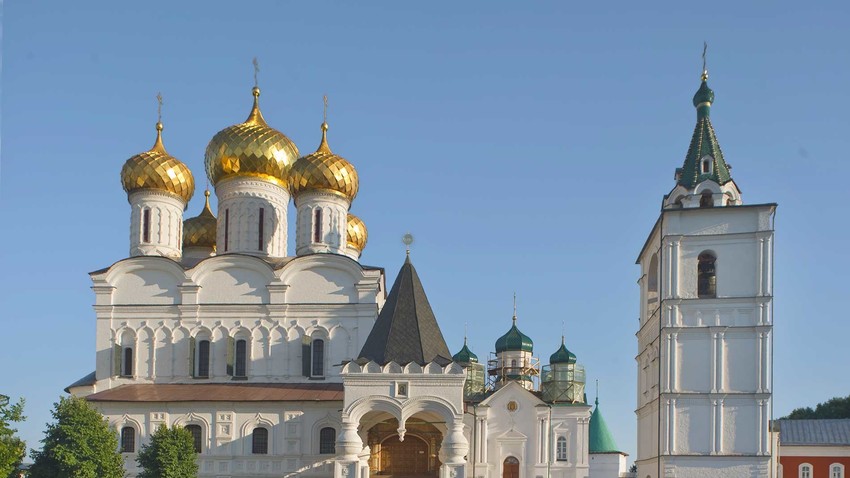 William Brumfield
Linked to the Romanov dynasty, it suffered during the Soviet period.

Logistical support for Prokudin-Gorsky’s work came from the Ministry of Transportation, which facilitated his photography along Russia’s rail and waterways, including the Volga River. One of the many historic towns Prokudin-Gorsky visited along the Volga was Kostroma, which rivals its neighbor Yaroslavl for the beauty of its churches and its importance in Russian history. 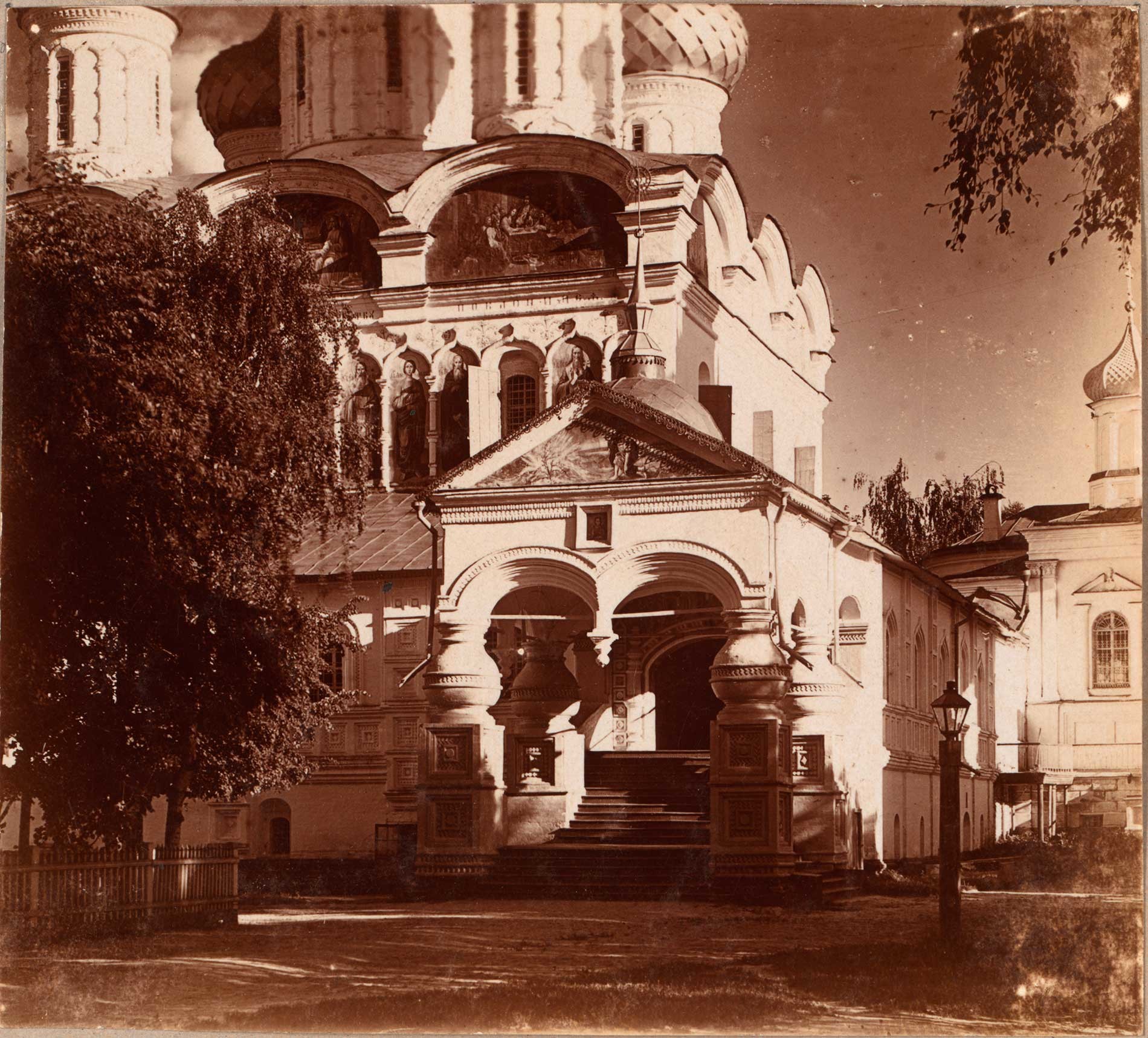 Prokudin-Gorsky made two trips to Kostroma, in 1910 and again in 1911. He was particularly interested in the renowned Trinity-Ipatiev Monastery, which played a critical role in the history of the Romanov family in the early 17th century. Already acquainted with the imperial family, Prokudin-Gorsky was drawn to the monastery in advance of the tercentenary of the Romanov dynasty in 1913.

During the 16th century, the monastery’s main benefactors were Dmitry Godunov and his nephew - and future tsar - Boris Godunov (1552-1605). The considered the monastery to have been founded by their Tatar ancestor Murza Chet, who in 1330 left the Golden Horde for the court of Muscovite Prince Ivan Kalita. In Moscow, Murza Chet accepted Christianity and the Christian name Zakhary (Zacharius). 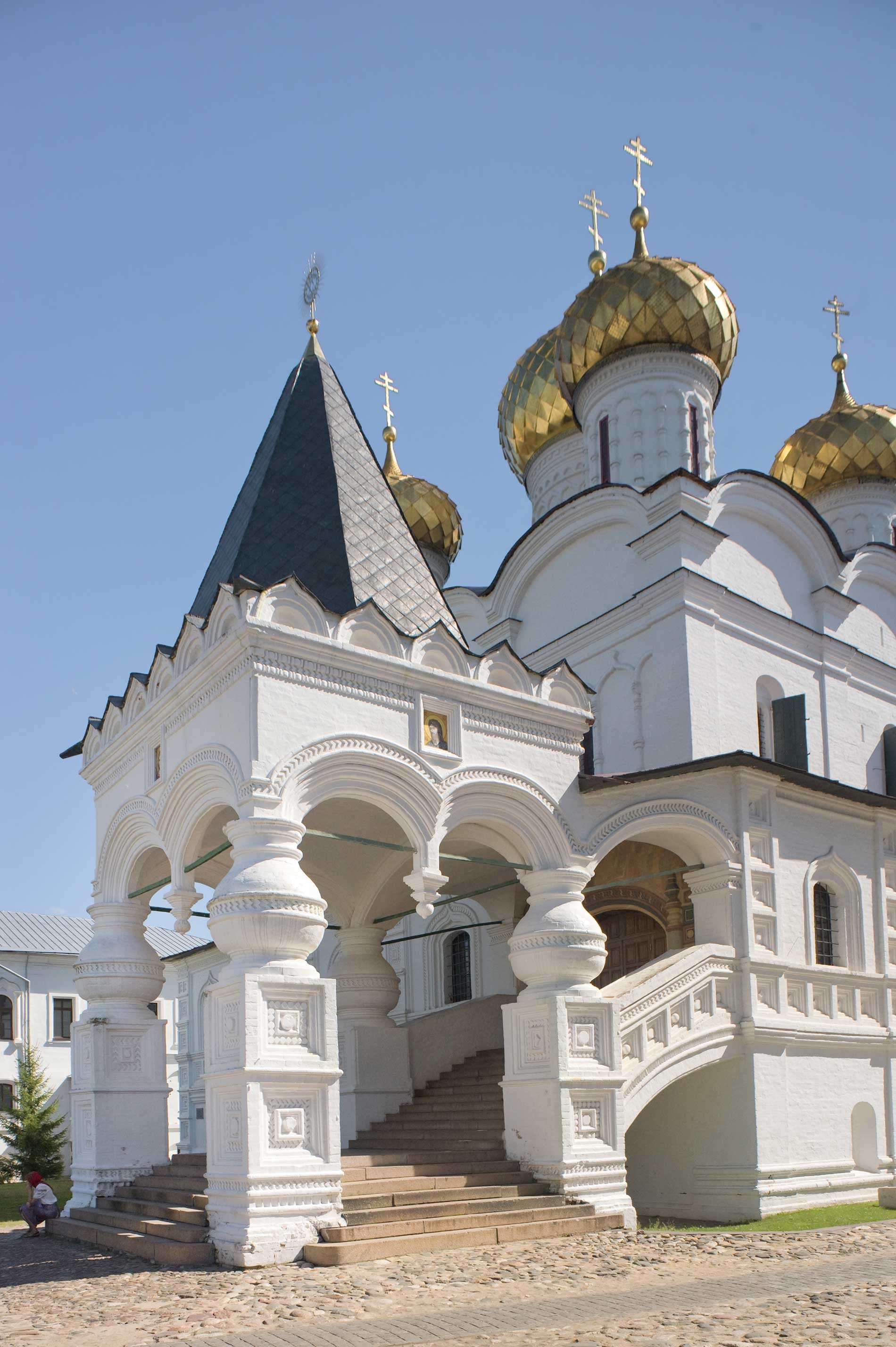 As a sign of favor, Ivan Kalita gave him extensive lands near Kostroma. According to legend, Zakhary/Chet was an a miraculous vision of the Virgin Mary flanked by St. Philip and St. Hypatius, the early 4th-century bishop of the diocese of Gangra in Asia Minor. In gratitude for his vision, Zakhary decided to support the establishment of a monastery dedicated to the Holy Trinity and St. Hypatius (Ipaty in Russian).

Refuge for the Romanovs

After the death of Boris Godunov in 1605, Russia was consumed by a devastating period of social disorder, civil war and foreign intervention - particularly by Polish forces. In early 1613, the monastery gave refuge to the young Mikhail Romanov (1596-1645) and his mother, as marauding bands and Polish cavalry roamed the countryside. Despite the peril, Mikhail was crowned first tsar of the Romanov dynasty in July 1613. 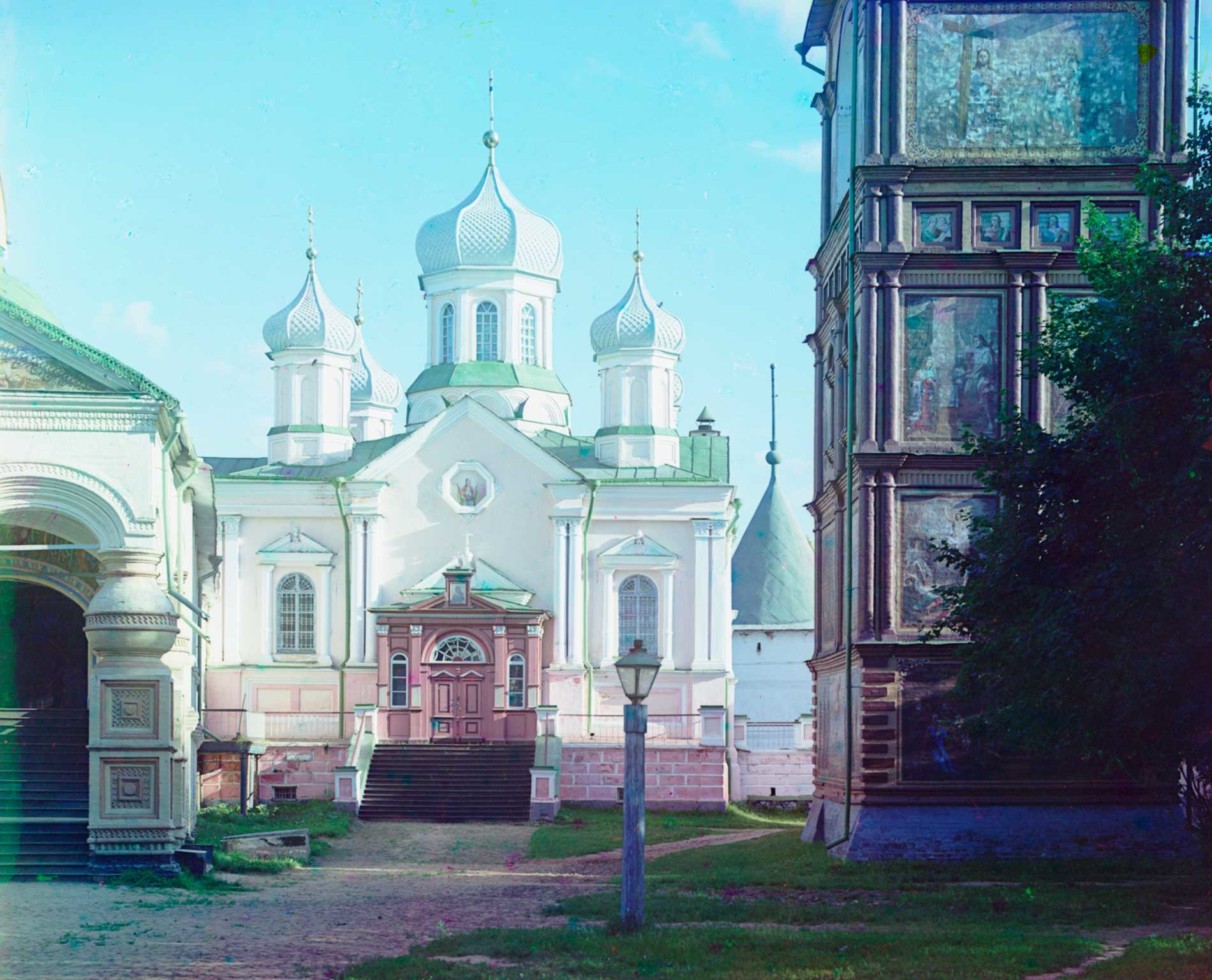 As stability returned to Russia under Romanov rule in the 17th century, the Ipatiev Monastery received substantial donations acknowledging its role in the dynasty’s accession. Central among the monastery’s buildings was the Cathedral of the Holy Trinity, rebuilt in 1650-52.

As usual during the early medieval period, the original monastery structures, including the main church (sobor), were made of wood. In the mid-16th century Dmitry Godunov built the first masonry version of the cathedral, which was severely damaged in 1649 from an explosion of gunpowder stored in the cellar. Tsar Alexei Mikhailovich Romanov, Mikhail’s son, assented to a rebuilding in 1650. 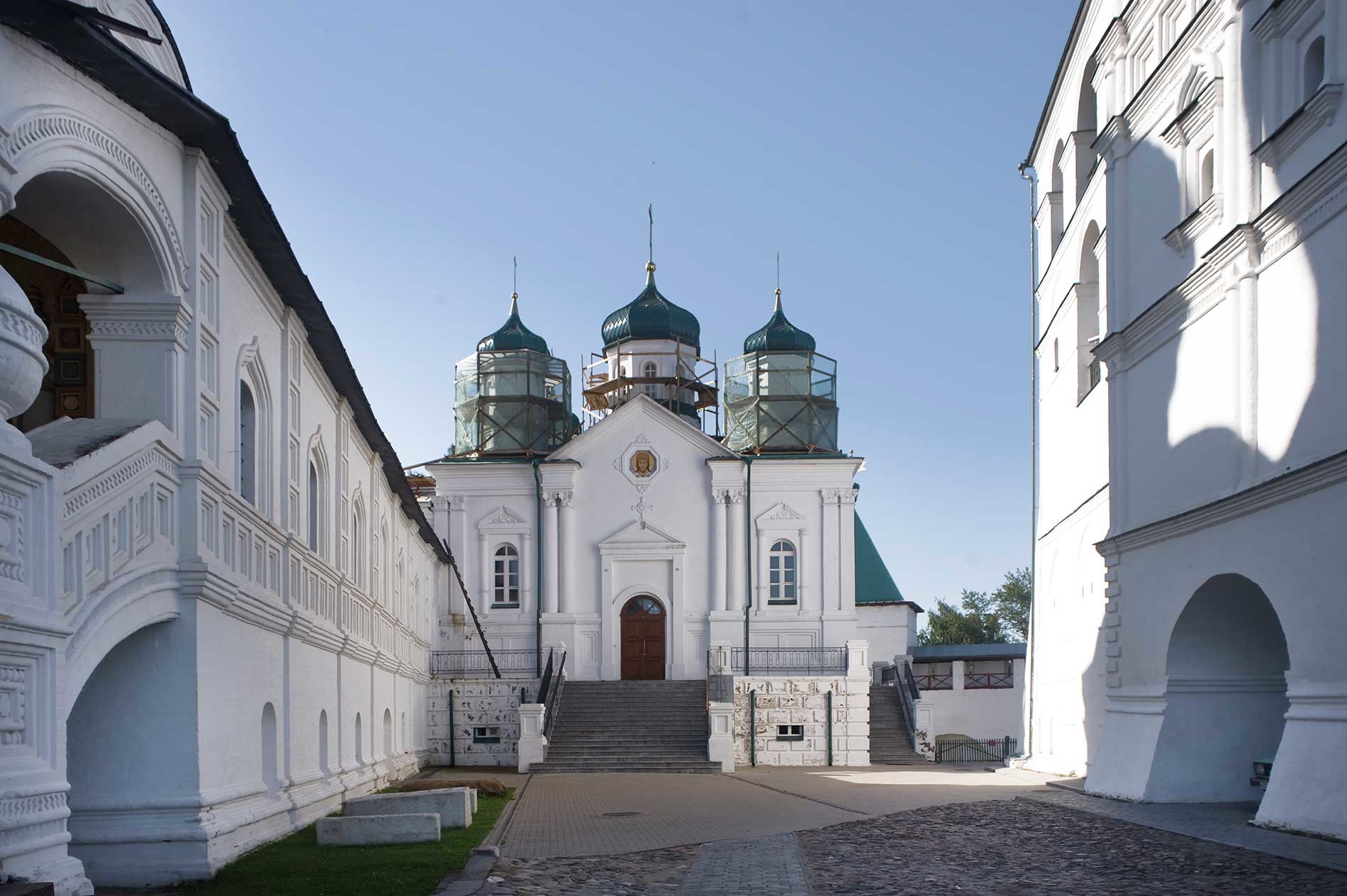 The design of the cathedral is traditional, with a crown of five cupolas. Yet its form is unusual because it has its main façade on the north, with an ornately decorated porch at the northwest corner containing a stone staircase that ascends to an enclosed gallery. Within the gallery, the main portal is on the west, as usual in Russian Orthodox practice.

Although the original glass negative of Prokudin-Gorsky’s image is missing in the Library of Congress collection, his contact prints show that he photographed the northwest porch and staircase, which were later used by Nicholas II during his 1913 visit. A comparison with my photograph of August 2017 shows the excellent state of preservation of these elements.

After completion of construction in 1652, work commenced on a large icon screen. Two years later, in 1654, master artists from Kostroma began the interior frescoes, but work came to a halt in 1656 due to an outbreak of plague that decimated the town. The interior was finally painted in the summer of 1685 by a distinguished group of court artists that included Gury Nikitin and Sila Savin. 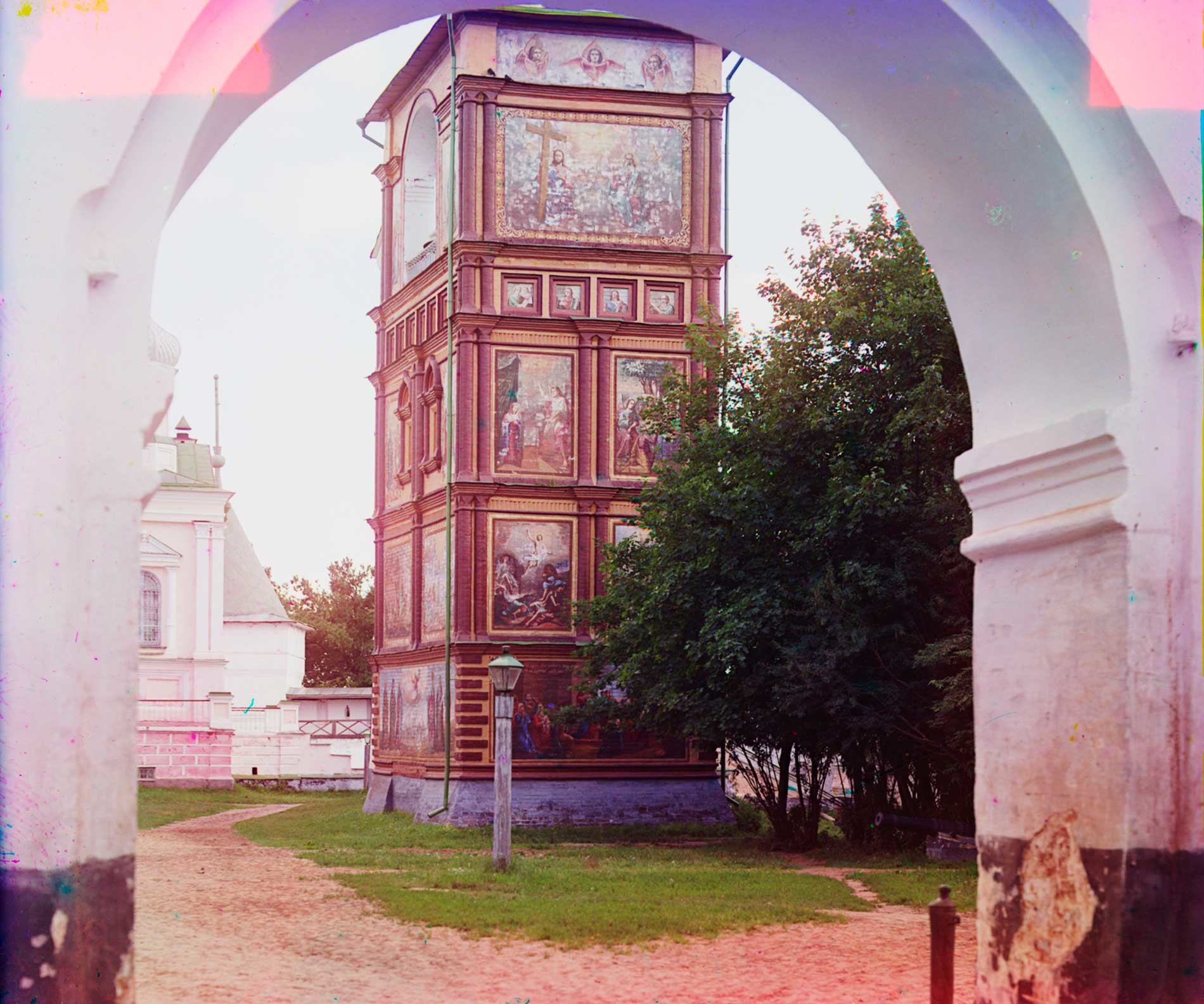 A cathedral’s destruction and resurrection

Another of my photographs shows the entire cathedral complex from the north, including the 17th-century bell tower and, in the distant center, the Cathedral of the Nativity of the Virgin, rebuilt in 1860-64 by Konstantin Ton in the Russo-Byzantine style at the southwest corner of the Trinity Cathedral gallery. The new Nativity Cathedral was commissioned by Alexander II in commemoration of the 250th anniversary of the founding of the Romanov dynasty. 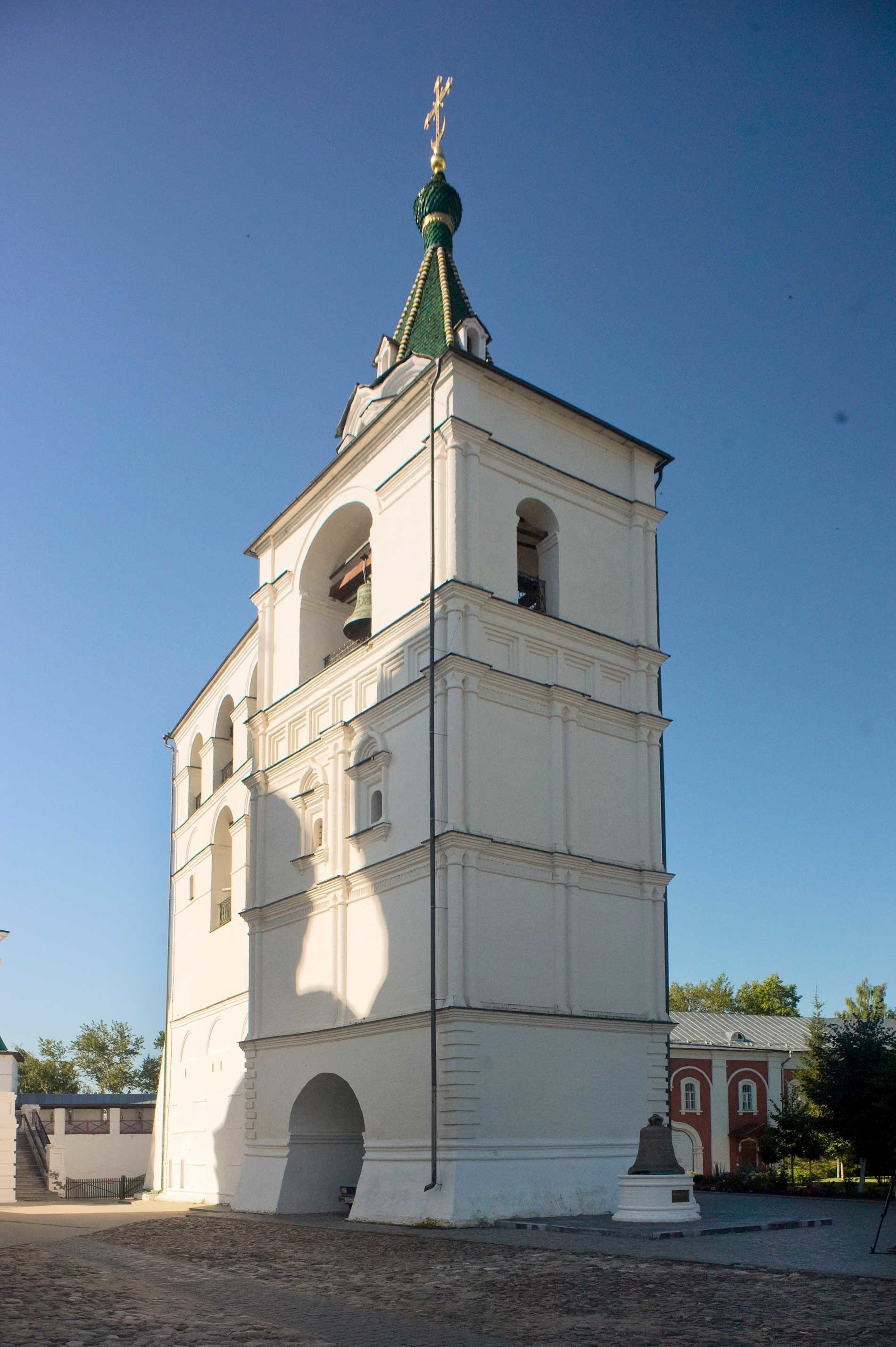 In 2008 a decision was taken at the highest state level to rebuild the Nativity Cathedral in Konstantin Ton’s Russo-Byzantine design. The basic structural work was completed by 2013 to commemorate the 400th anniversary of the reestablishment of Russian statehood in 1613. Work on the interior continues.

Prokudin-Gorsky took a closer view of the north façade of the Nativity Cathedral, as did I with a wider lens that shows the west gallery on the left. On the right side of both our photographs is the main bell tower, whose basic open-gable form was begun in 1603 by the boyar Dmitry Godunov, uncle of Tsar Boris Godunov. Expanded during the subsequent half century, the archaic structure gained a decorative tower in the 19th century. 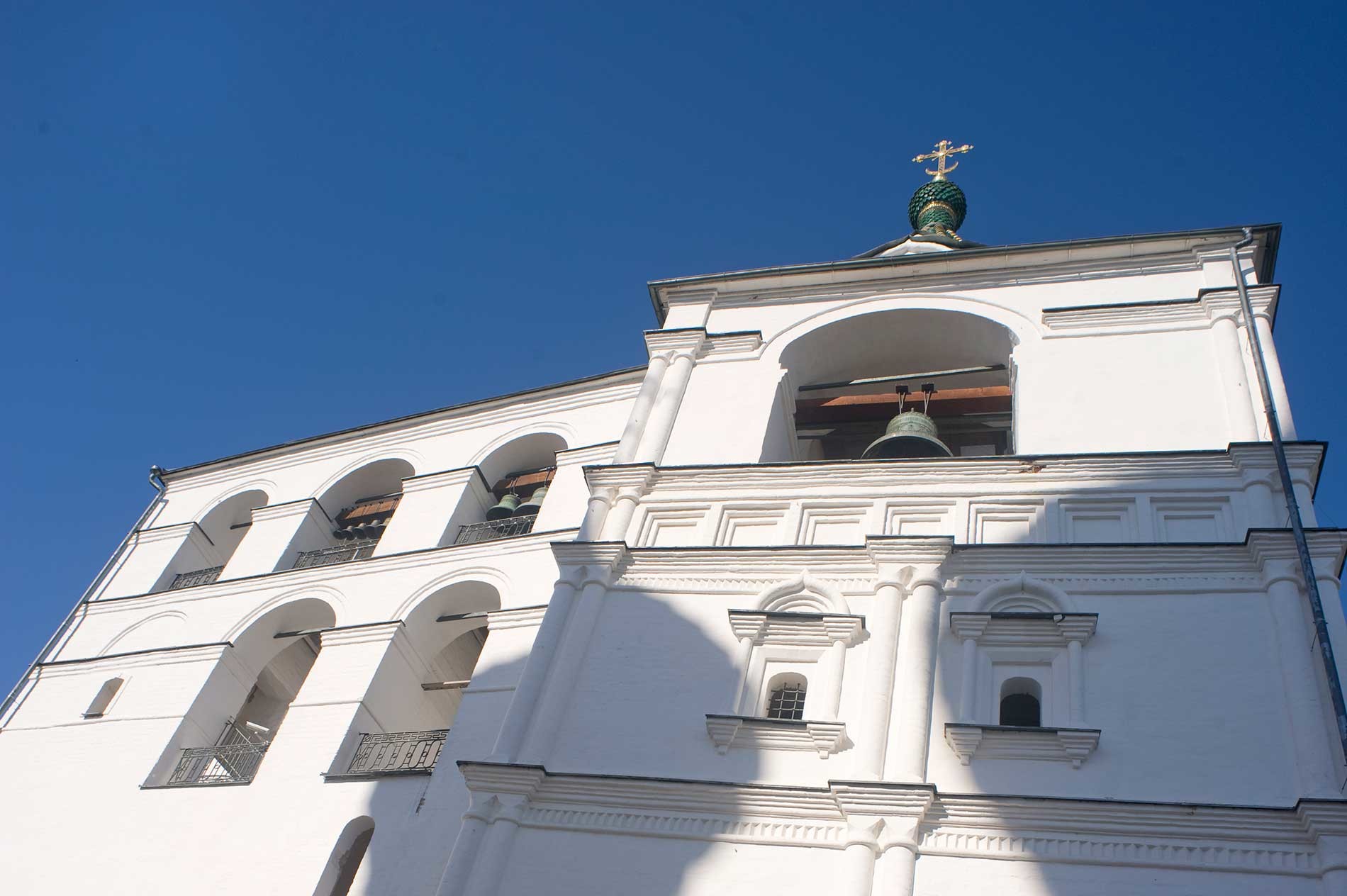 Prokudin-Gorsky took yet another view of the bell tower from the monastery’s north entrance arch. Both his views show the walls of the bell tower covered with paintings of scenes from the life of Christ. During the Soviet period, these paintings were effaced. At the time, they were considered 19th-century additions in a Western academic style that promoted Christianity and disfigured the earlier form. My photographs show the tower as a white monolithic structure with an impressive display of light and shadow.

In January 1991, the divine liturgy was once again celebrated in the Trinity Cathedral, and over the next three years agreements were concluded that allowed joint use of the monastery as a state museum and a functioning monastic institution. At the end of 2004 the entire monastery was granted to the Kostroma Diocese. 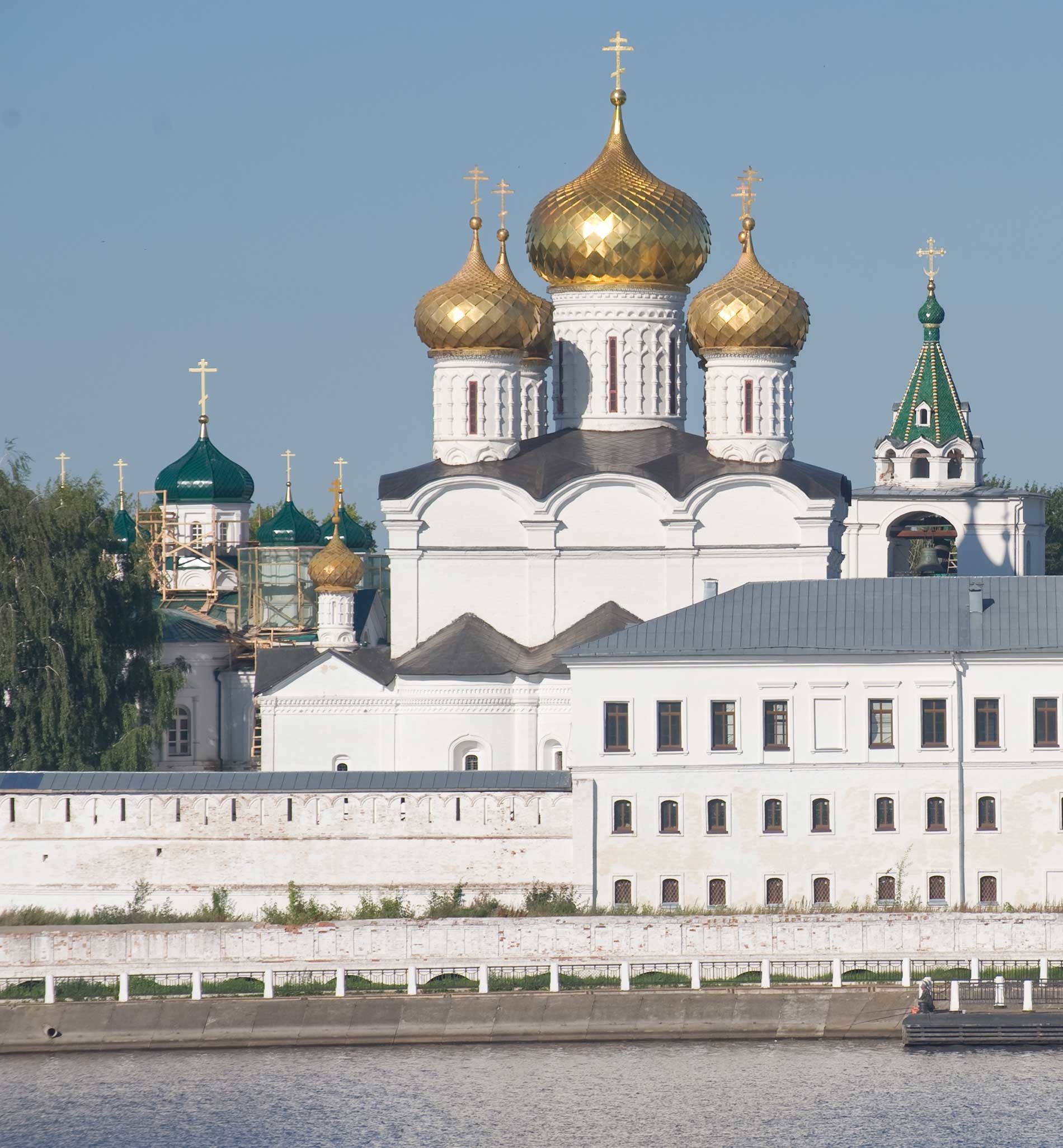