Why did the Soviet government flood old Russian towns and villages? 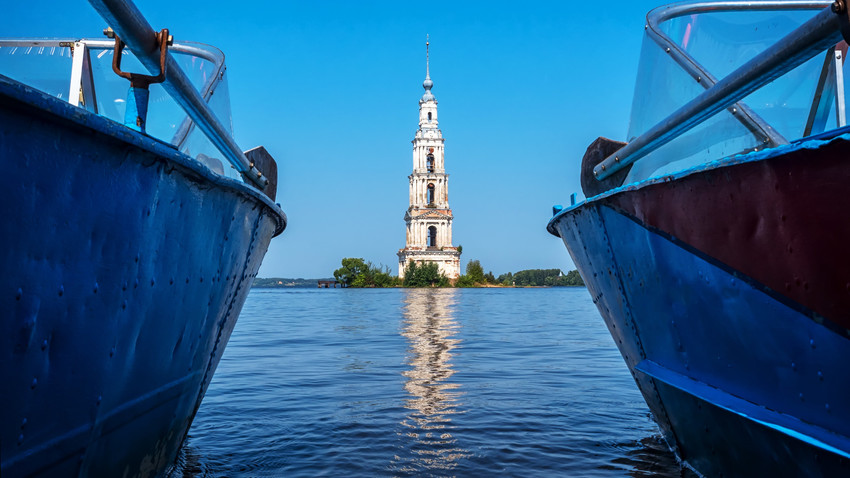 Legion Media
Bolshevik efforts to build a new country often meant that the old Russia was swept away, and in some cases that meant literally submerging it underwater. For example, towns and numerous villages were flooded during the construction of reservoirs and hydroelectric plants. Sometimes, however, the submerged settlements briefly returned to the surface…

Every year on the second Saturday of August, a ferry departs from a pier in the town of Rybinsk (165 miles northeast of Moscow), and travels into the waters of the Rybinsk Reservoir, stopping for a while as the ship’s passengers lower wreaths onto the surface of the water. This is the annual gathering of Mologa citizens and their families. The town of Mologa was completely flooded when the Rybinsk Reservoir was created in the late 1930s, and it’s still remembered by those who were born there before the “flood.” 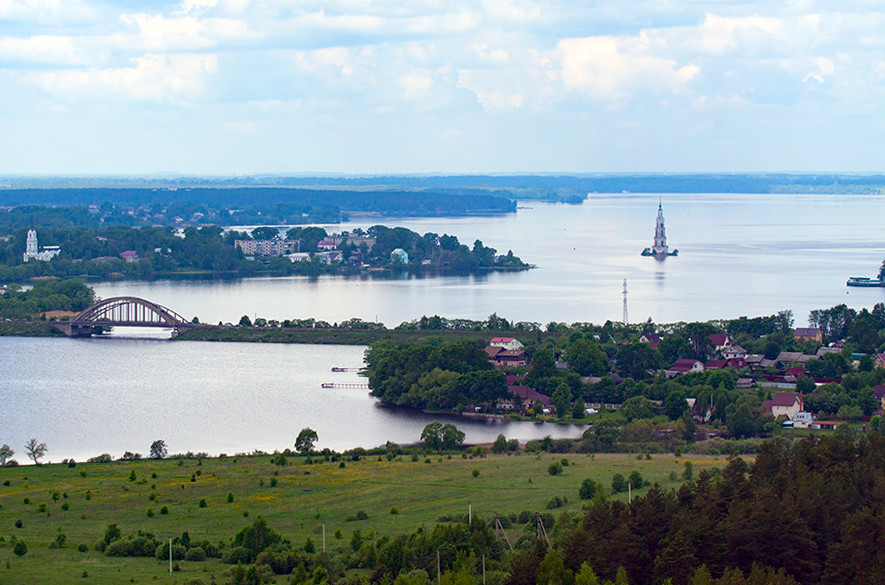 Panoramic view of the southern part of the Rybinsk reservoir.

Building the Rybinsk Reservoir was justified as a necessary part of the waterway system that connects the Baltic Sea and the Caspian Sea. For sure, it had already been possible to sail from Leningrad (St. Petersburg) to Astrakhan, but only on vessels with a small draft could make the journey. In 1935, the State Planning Committee approved the creation of what was to become the world’s largest man-made body of water at the time.

In April 1941, the Volga and Sheksna rivers were blocked by dams, inundating 5,000 square kilometers of land, and completely flooding 663 villages and the town of Mologa, as well as partly flooding six other towns. About 130,000 people had to be relocated, and large tracts of agricultural land and forest were destroyed. Construction was carried out mainly by prisoners from the Volzhsky penitentiary camp, which also enclosed those who didn’t want to relocate. 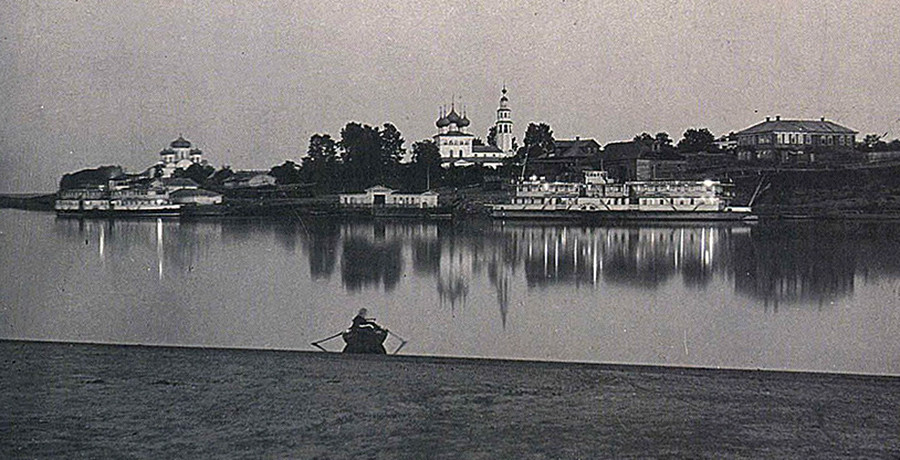 Town of Mologa at night.

“As if a monstrous, devastating tornado burst out over Mologa. People went to sleep in peace, not even realizing that tomorrow their fates were to be altered beyond recognition,” said Yuri Nesterov, a former Mologa citizen.

Known to exist at least since the 12th century, Mologa was originally part of the Rostov Principality. Moscow annexed it in the mid 14th century, and a few centuries later the town became a source of freshwater fish for the Tsar’s table. In 1777, Mologa was given the status of a local county center. The city had a monastery and several churches, as well as a fire lookout tower created by Andrey Dostoevsky, the famous writer’s younger brother. At the end of the 1930s, the town’s population was about 7,000. 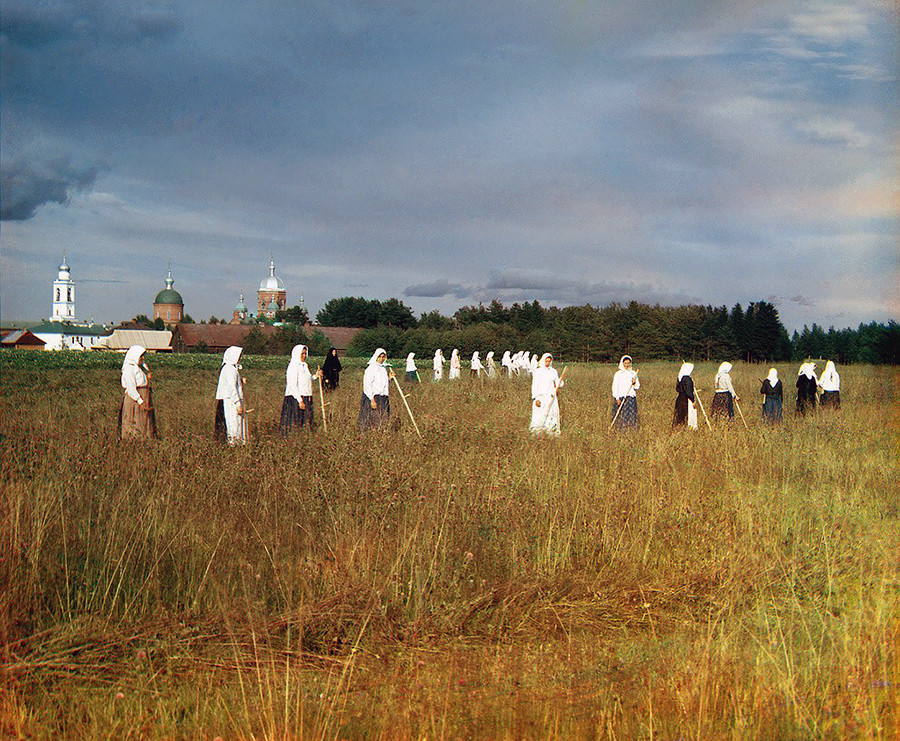 While the creation of the Rybinsk Reservoir led to much grief among inhabitants of the inundated area, it’s also true that the reservoir helped save thousands of lives when World War II broke out. The reservoir helped to improve transportation. When the Nazis pushed deep into Russian territory, blocking many railways and roads, the Volga River was sometimes the fastest way to transport goods from the Urals and lower Volga regions to the country’s central region.

The Rybinsk Reservoir made it possible for heavy-loaded vessels to go further up the river. Also, the waterway helped evacuate people from occupied territory. The second advantage was the Rybinsk Hydroelectric station, which during the Nazi onslaught was often Moscow’s only source of electricity.

For a long time, information on Mologa’s inundation was classified, and even talking about the submerged town was dangerous. Grieving could be interpreted as condemnation of the Soviet government and its actions. Only in the 1980s, rumors about the town’s fate leaked to the press, and now the former citizens of Mologa gather regularly.

Sometimes, as happened in 1992-1993, the water level falls low enough for natural reasons so that the former town can be visible. When this happens, former Mologa residents can once more step onto their native soil, walk through familiar streets, sit on the foundations of their houses and visit their ancestors’ graves. Where once stood the Ascension Cathedral a handmade memorial sign reads, “Forgive us, Mologa.” 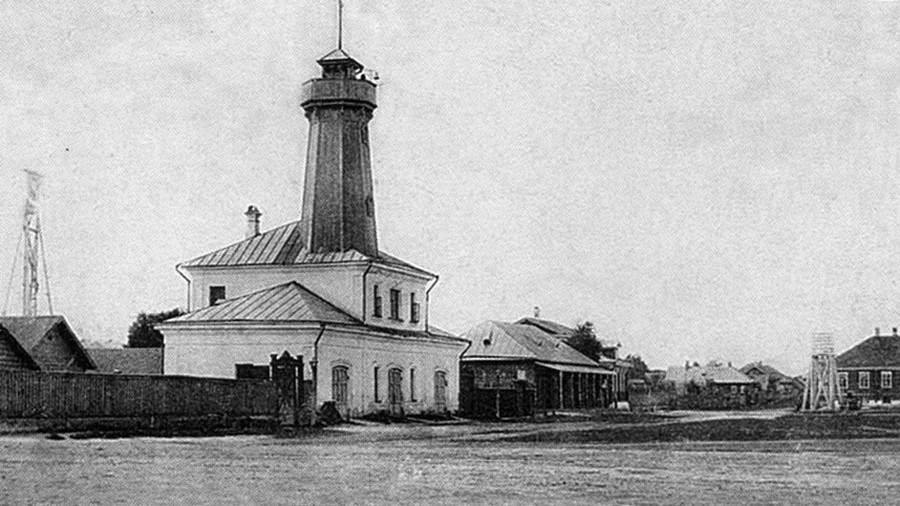 Fire lookout tower in the town of Mologa, designed by Andrey M. Dostoevsky.

“As we’ve grown old, we’ve started thinking about our youth more and more,” said Nikolay Novotelnov, a Mologa native. “It’s sad that there are less and less of us, and Mologa cannot be brought back.”

Each resurfacing, however, brings little good to the town’s remnants: The following spring, the ice drift scrapes the ground, uprooting and carrying away the last signs of the former town.

When discussing the fate of Mologa it's important to mention the alleged report dated 1941 by Lt. Sklyarov to Major Zhurin (both NKVD officers) with information that 294 Mologa residents refused to leave and supposedly drowned as the town was inundated. In fact, Mologa was submerged slowly, only completely underwater in 1946, which is strong evidence that the document and its claims are fake.

In some published articles, we can see a scan of the document containing this information, and it's too simplistic and doesn't match those usually found in Soviet officialdom. Historians have looked in archives for the original of this document, but have not found any trace of it. Finally, it's doubtful that the NKVD could have failed to evacuate unwilling residents. Most certainly, they would have forced them to leave. 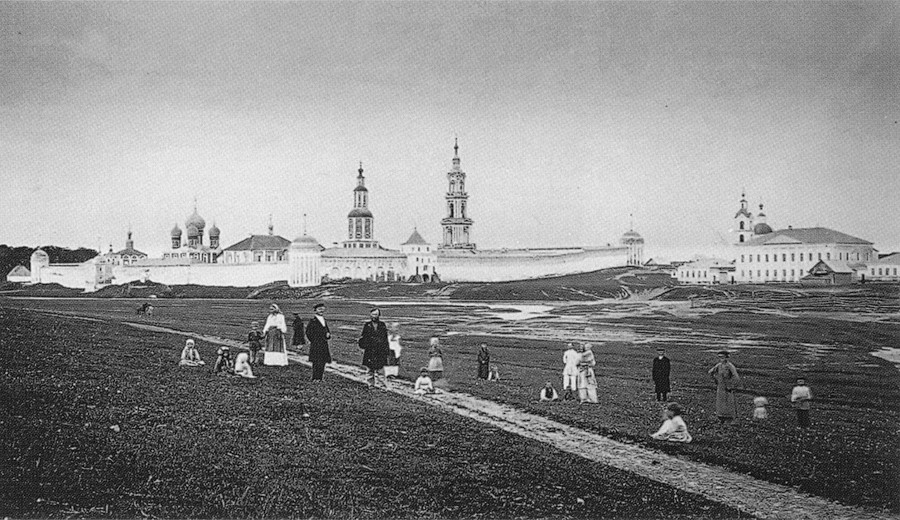 The old town of Kalyazin.

Mologa was not the only town submerged in the reservoir’s construction, and the same fate befell many more villages and towns. The Soviets embraced the idea of omnipotence of industry, and thought that man must conquer nature.

"We must not wait for gifts from nature; but taking them by ourselves is our task,” said Soviet agricultural scientist, Ivan Michurin, whose words readily describe the Soviet approach to nature. Later, in the 1960s, there was even a failed initiative to turn some Siberian rivers backwards in order to irrigate the southern regions of the USSR.

In the 1930s, the Soviets were in a rush to build a national energy system in order to boost industrial growth, and so, many towns were submerged in ambitious hydroelectric projects. Ves’yegonsk and Korcheva near the Rybinsk Reservoir; Puchezh near Gor’kovskoe Reservoir (Nizhny Novgorod region); Bolgar near Kuybyshev Reservoir (Kazan region) -- all were submerged, partly or totally, in the name of electrification. The most popular symbol of Russia’s “Atlantis” is the partly-submerged bell tower in Kalyazin. 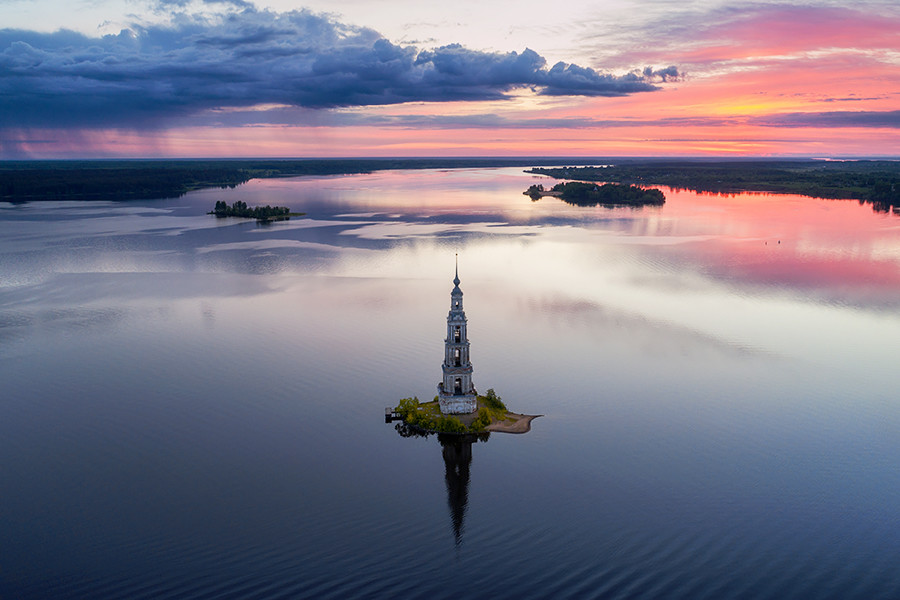 Bell tower in Kalyazin at night.

Founded around the 12th century, Kalyazin was a prosperous trading and manufacturing town on the Volga, 120 miles north of Moscow. During construction of the Uglich Hydroelectric Station and the Uglich Reservoir, its historical center and all historical buildings and monuments were submerged: The old streets now end abruptly at the shore. What’s left is the magnificent bell tower of the demolished Nikolsky Cathedral.

The tower seems to rise out of the water, but in reality it stands on a small island left intact to serve as a point of navigation, as a lighthouse. Here, the Volga makes a sharp curve, and a lighthouse is necessary. In the 1980s, the bell tower’s foundation was fortified, and in 2016 new bells were cast. Now, the bell tower is an unofficial symbol of Kalyazin and a major tourist attraction, accessible by boat.