Travel
William Brumfield
This gateway to the east boasts a number of unique constructions. 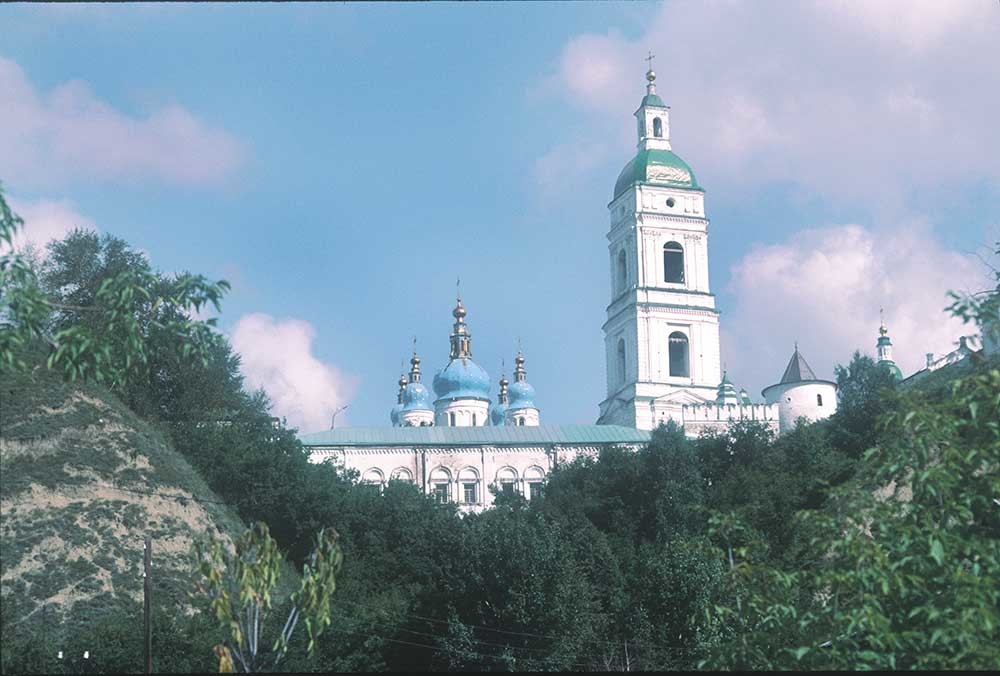 At the beginning of the 20th century, the Russian chemist and photographer Sergei Prokudin-Gorsky invented a complex process for vivid, detailed color photography. His vision of photography as a form of education and enlightenment was demonstrated with special clarity through his photographs of architectural monuments in the historic sites throughout the Russian heartland.

In June 1912, Prokudin-Gorsky ventured into western Siberia as part of a trip along the Kama-Tobolsk Waterway, a historic link between the European and Asian sides of the Ural Mountains. Traveling on the small paddlewheel steam cutter “Tyumen,” he photographed the town of Tyumen on the Tura River and arrived in Tobolsk, where he took several stunning panoramas. My photographs of the Tobolsk area were taken in the late summer of 19 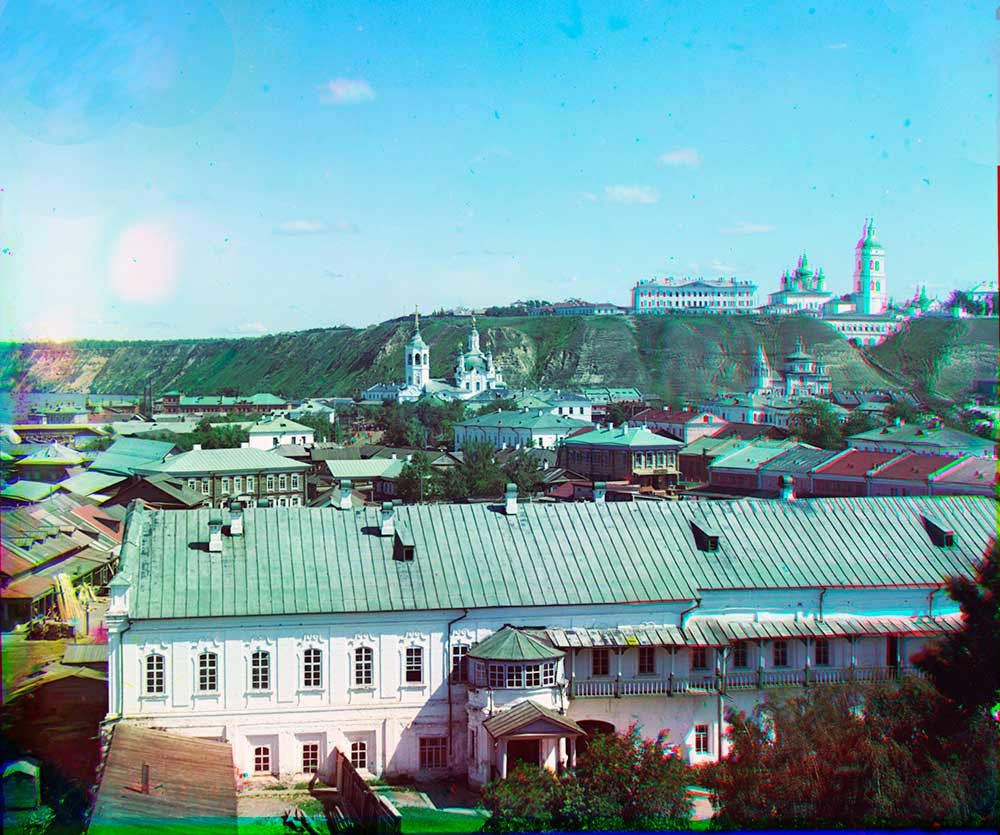 Until the Soviet period, western Siberia was administered primarily from Tobolsk, whose citadel overlooked the high right bank of the Irtysh River, a tributary of the Ob River and a critical artery for Russian movement into Siberia. It was in this area of the Irtysh that a band of Cossacks, led by the legendary Yermak and supported by the Stroganovs, defeated the Tatar troops of Khan Kuchum in 1582. Boris Godunov — the power behind the Muscovite throne from 1586 until he became tsar himself in 1598 — understood the potential of Siberia, and launched a campaign to establish settlements. Tobolsk was founded in 1587 by the Cossack leader Daniel Chulkov at the confluence of the Tobol and Irtysh Rivers.

A different vision from above and below 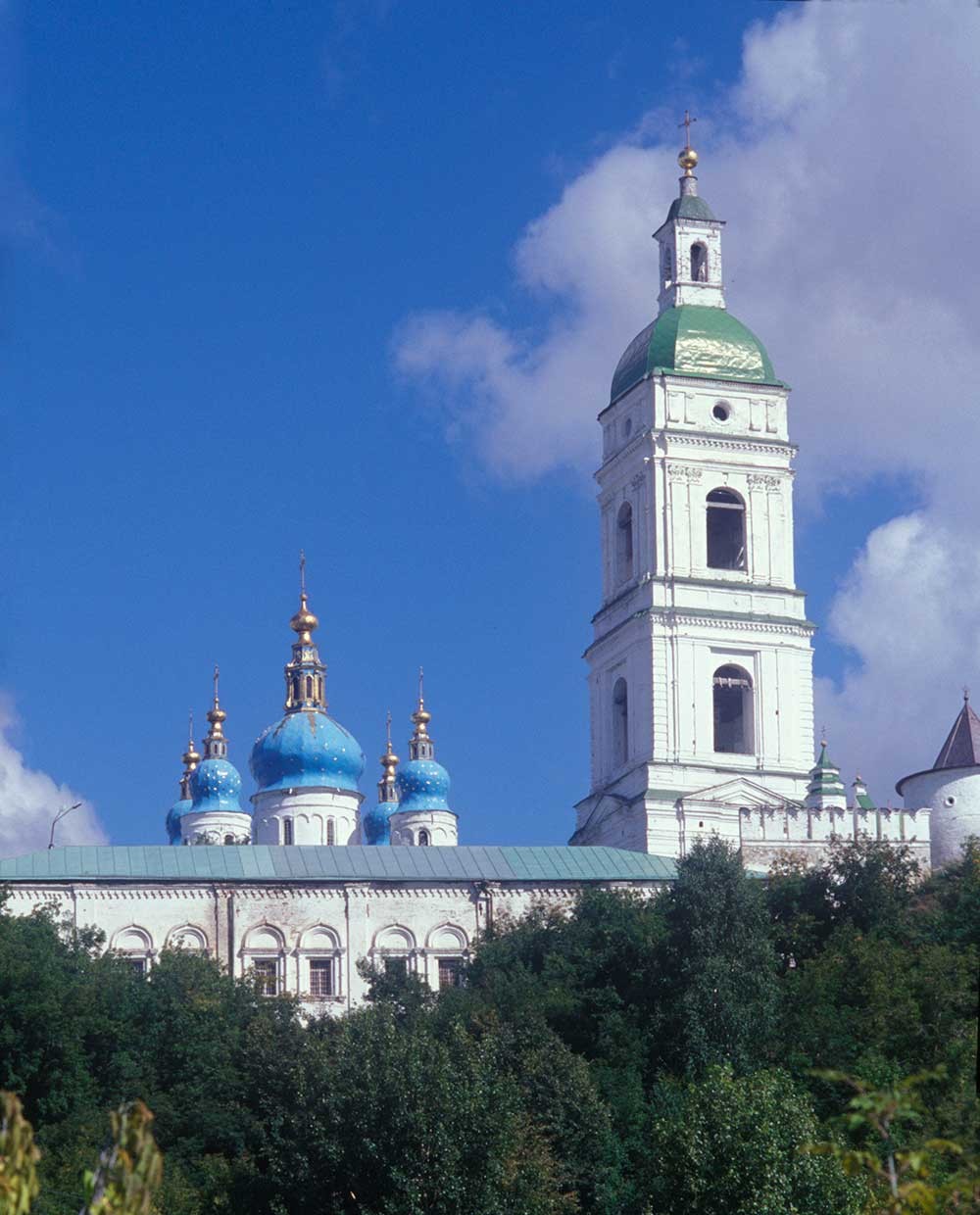 Tobolsk is sharply divided by topography into two sections: upper and lower. The upper part — often referred to as the Tobolsk Kremlin — was reserved for institutions of power such as the territorial administration and the cathedral ensemble. The lower part contained the merchant district, the Tatar district the river port. Prokudin-Gorsky took densely informative views of both sections.

In the lower town, his prime vantage point was the Transfiguration Church bell tower (destroyed during the Soviet period) at the Znamensky Monastery. From there, he took a spectacular north view that encompassed the on its steep bluff overlooking the Irtysh. 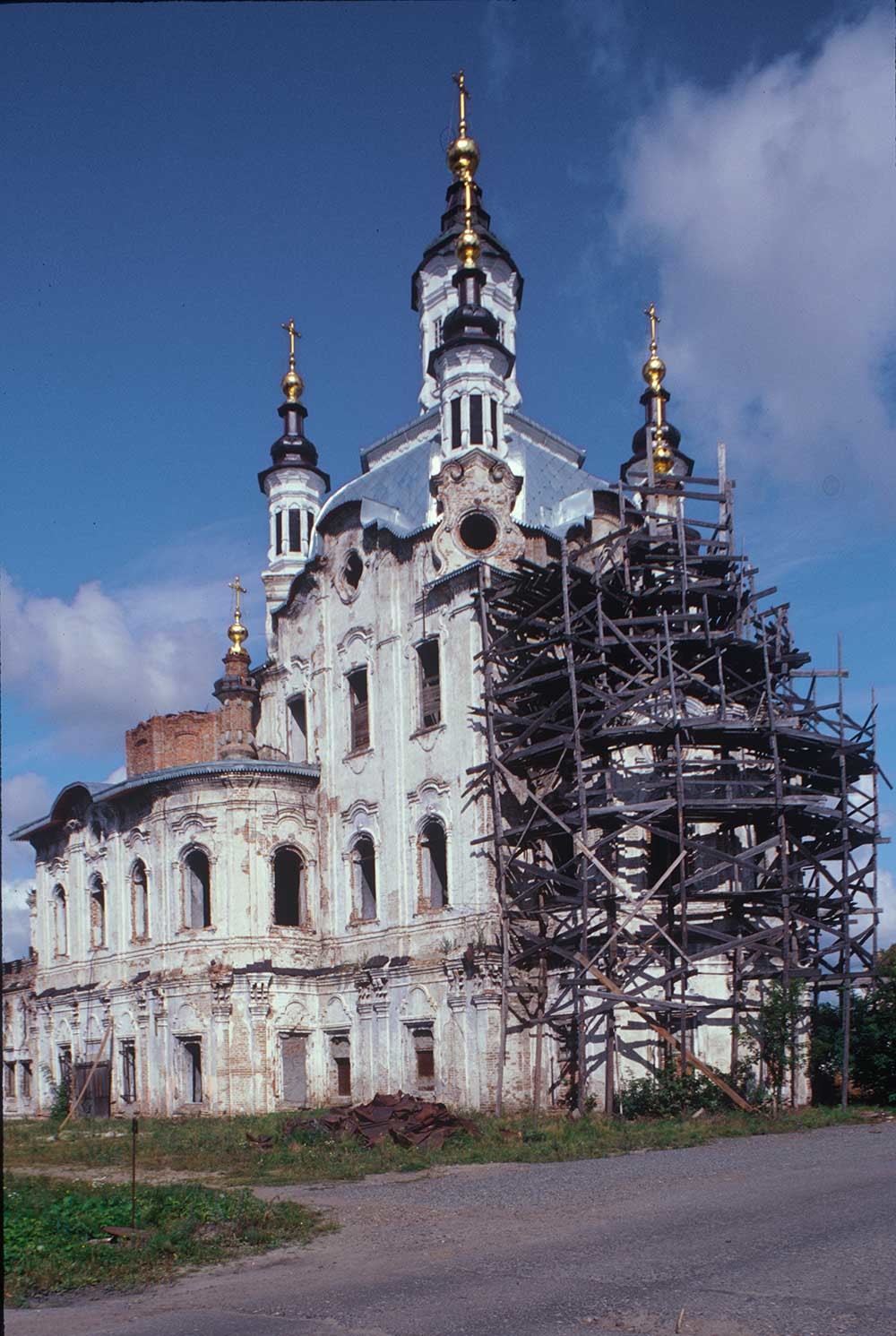 Visible in the center the five cupolas of the monumental St. Sophia Cathedral, which Prokudin-Gorsky also photographed in detail. By 1621, Tobolsk had become the seat of the vast Diocese of Siberia, and a wooden cathedral was dedicated to St Sophia (Divine Wisdom). The Sophia deion linked it to the primary cathedrals of ancient Rus in Kiev and Novgorod, as well as to the 16th-century St. Sophia Cathedral in Vologda. (Until 1620 Tobolsk and Siberia were part of the Vologda diocese.) 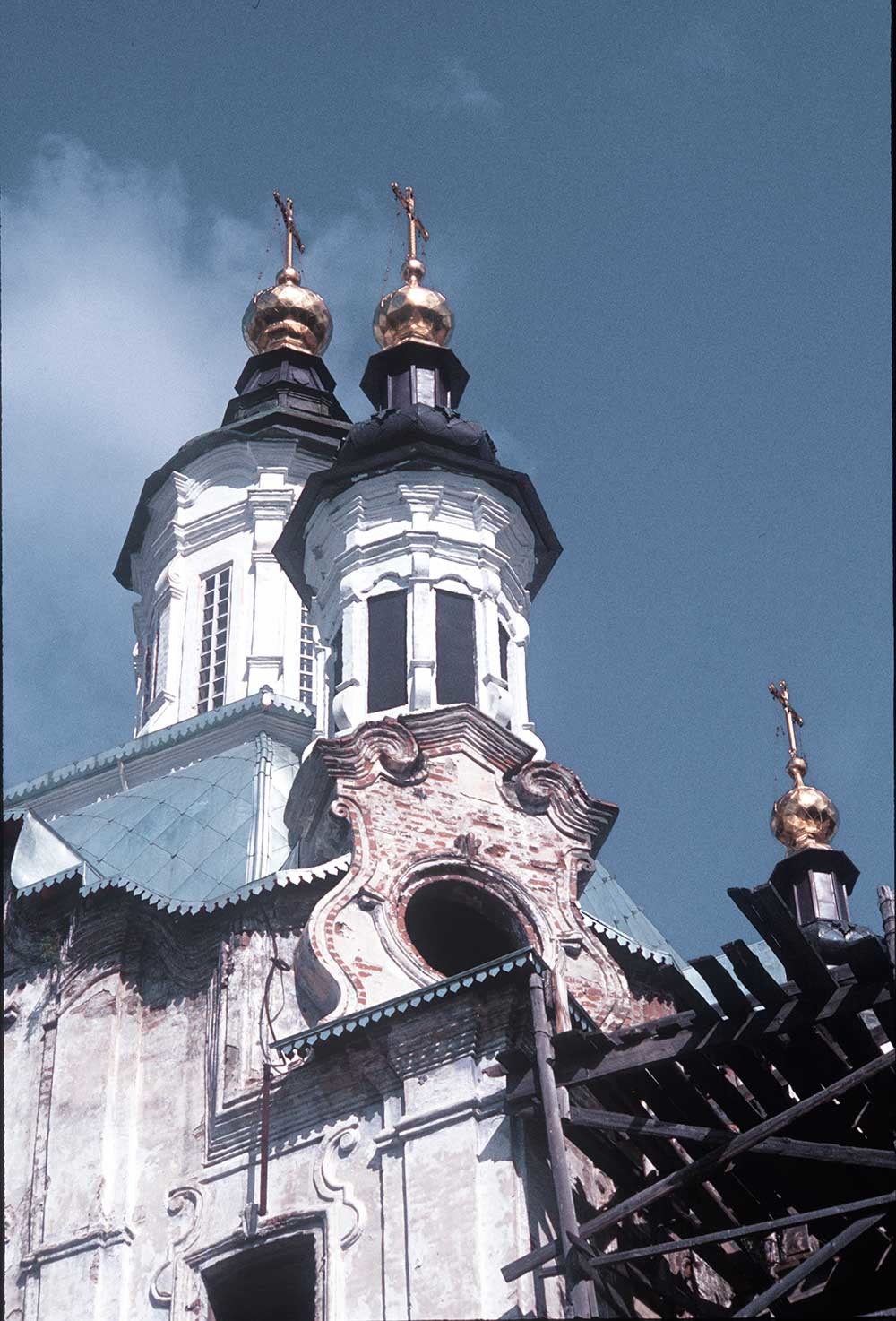 Fires periodically consumed the wooden cathedral, and after a lightning strike in May 1677, Metropolitan Pavel, Prelate of Siberia, obtained support from to build Siberia’s first brick temple in the manner of Moscow Kremlin shrines. Beset by construction difficulties, the cathedral was consecrated in 1686 to the Dormition of the Virgin, thus giving it two main altars — the Dormition and St. Sophia. The Dormition echoed the dedication of the central cathedrals of Vladimir and the Moscow Kremlin.

The vertical dominant in the Tobolsk is the 250-foot-tall cathedral bell tower, built in 1794-97. To the left in Prokudin-Gorsky’s photograph is the territorial administration building, behind which was the main prison, notorious for its role in the Siberian exile system. 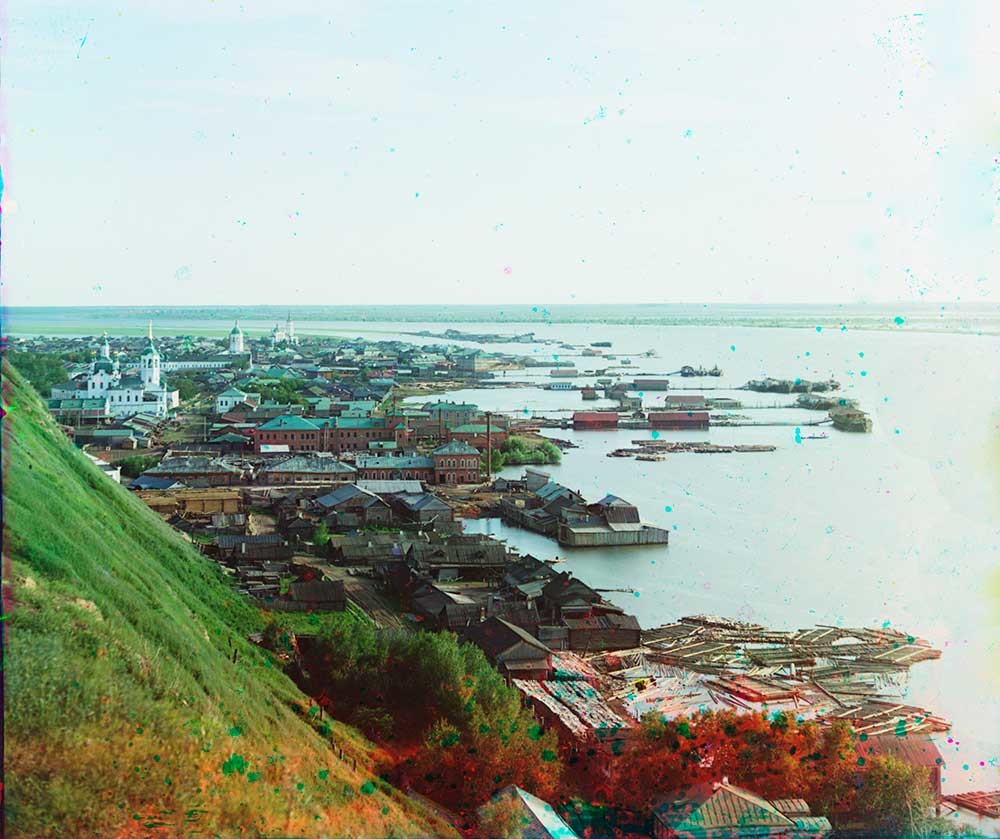 Also visible in his photograph is the (state treasury), spanning the ravine beneath the Sophia Cathedral. It was often referred to as the “Swedish Chambese of its construction by captured Swedish soldiers sent to the town after Peter’s 1709 victory over King Charles XII of Sweden at the battle of Poltava.

Churches and a mosque

Visible below the Sophia Cathedral in Lower Town is the Epiphany Church, closed in 1930 and razed in 1949. A somewhat better fate awaited its neighbor to the left, the ornate Church of Sts. Zacharias and Elizabeth, also as the Church of the Resurrection. Begun in 1757 and completed only in 1776, this church on the market square was the culminating expression of the late baroque in Tobolsk, with an exuberant display of decorative elements. The main three-story space is flanked on north and south by two-story chapels, whose rounded corners echo the curvilinear crown with its five cupolas. The bell tower, rising from a large vestibule on the west end, is harmoniously scaled to the height of the main structure. 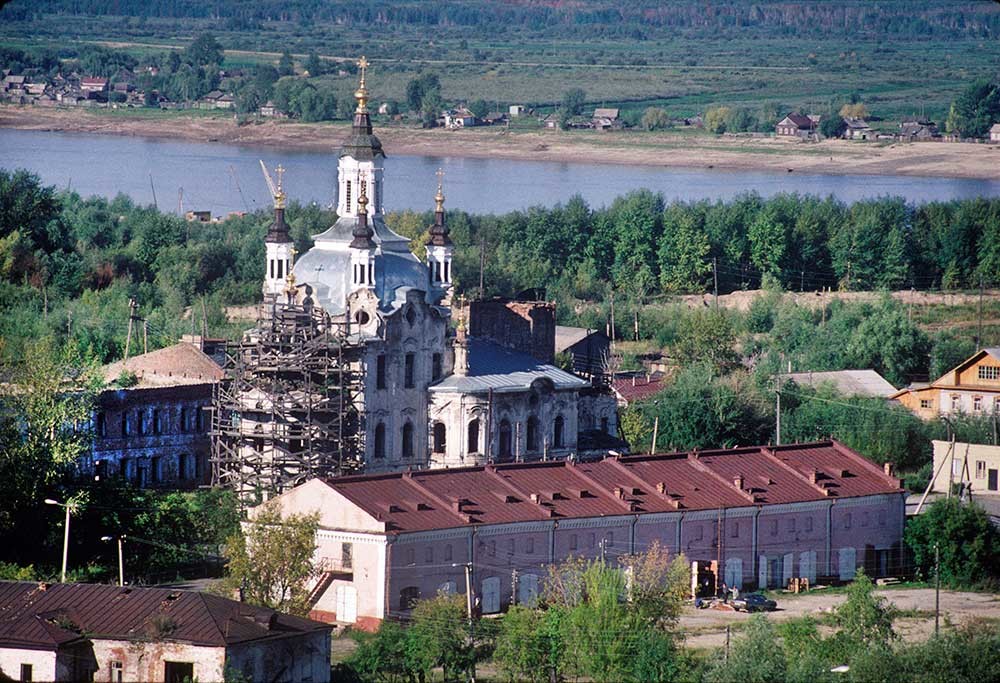 The interior of the Church of Sts Zacharias and Elizabeth contained the most accomplished baroque icon screen in western Siberia, but it has not survived. In the 1930s, the interior was despoiled, and the bell tower and cupolas were demolished. Because parish needs are currently being met in the nearby Archangel Michael Church, the restoration of Sts Zacharias and Elizabeth has proceeded at a glacial pace, evident from the scaffolding in my 1999 photographs. The five cupolas were rebuilt in the late 1980s. 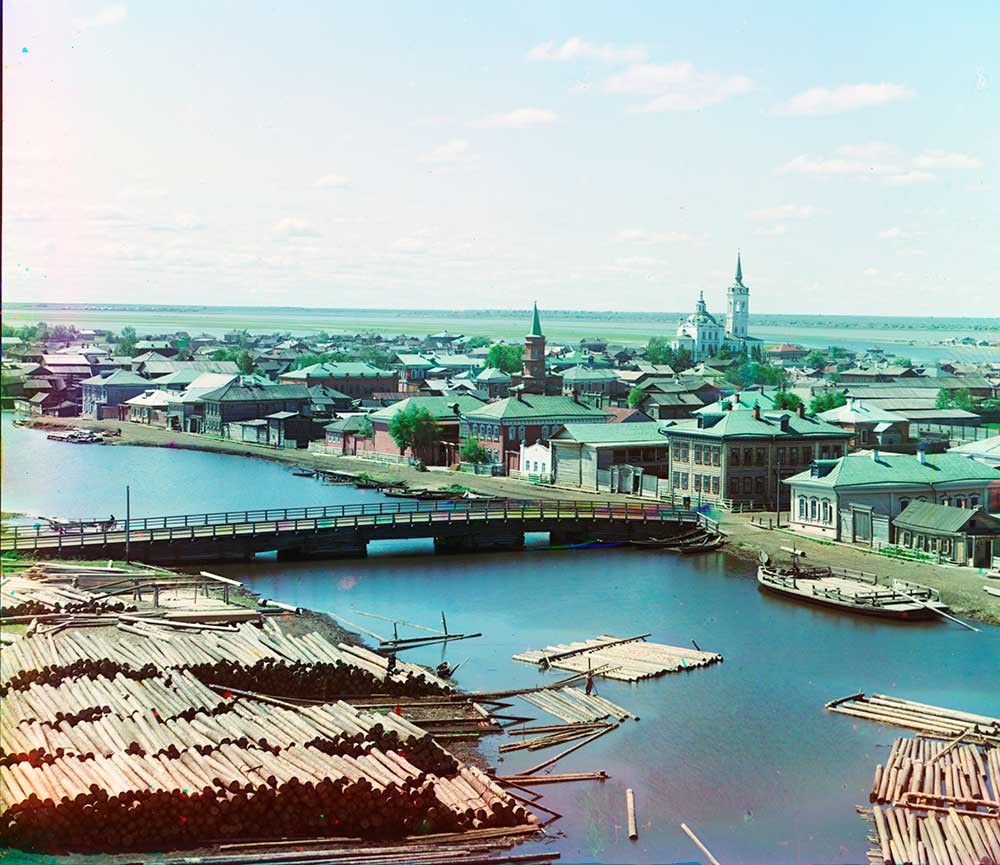 Prokudin-Gorsky’s other view from the Znamensky Monastery bell tower looks southwest toward the Irtysh across the small Abramovka (or Monastyrka) River. Stacked with logs on the near bank, the river is lined with the houses of prosperous merchants in the Tatar-Bukhara District.

To the left is the minaret of the district's red brick mosque, built at the end of the 19th century to replace a wooden mosque. A mosque is thought to have existed on the site for centuries. The main patron was the merchant Tokhtasyn Aitmukhametov, who also supported a religious school, or madrasah, at the mosque. Closed in 1930, the mosque was returned to the local Muslim community in 1988. 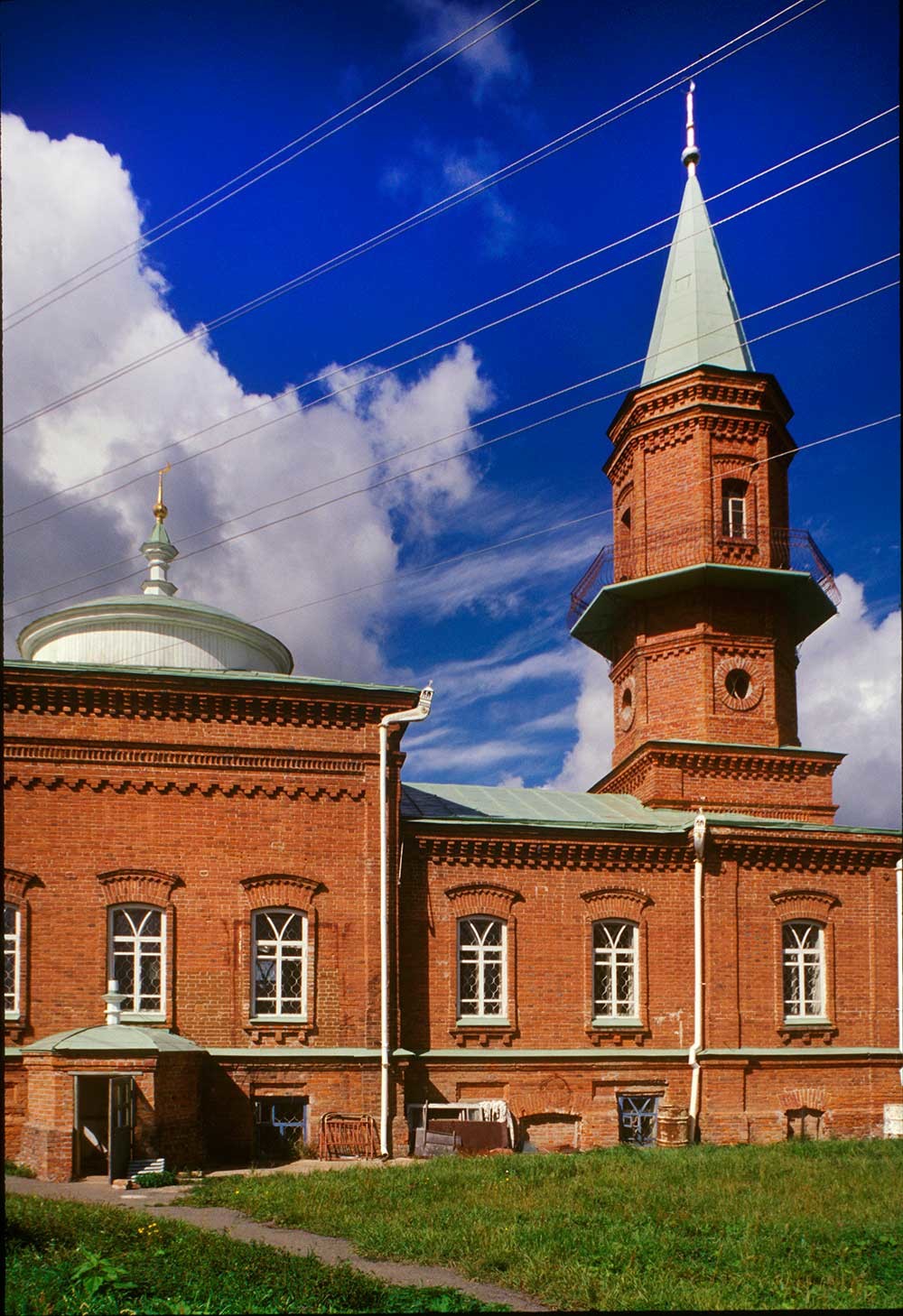 To the right of the mosque is the Church of the Elevation of the Cross, the town's first masterpiece of late architecture. Situated between the Tatar District and the Irtysh, the church owes its improbable but prominent location to the need to create ground in a marshy area near the Pokrovka River. 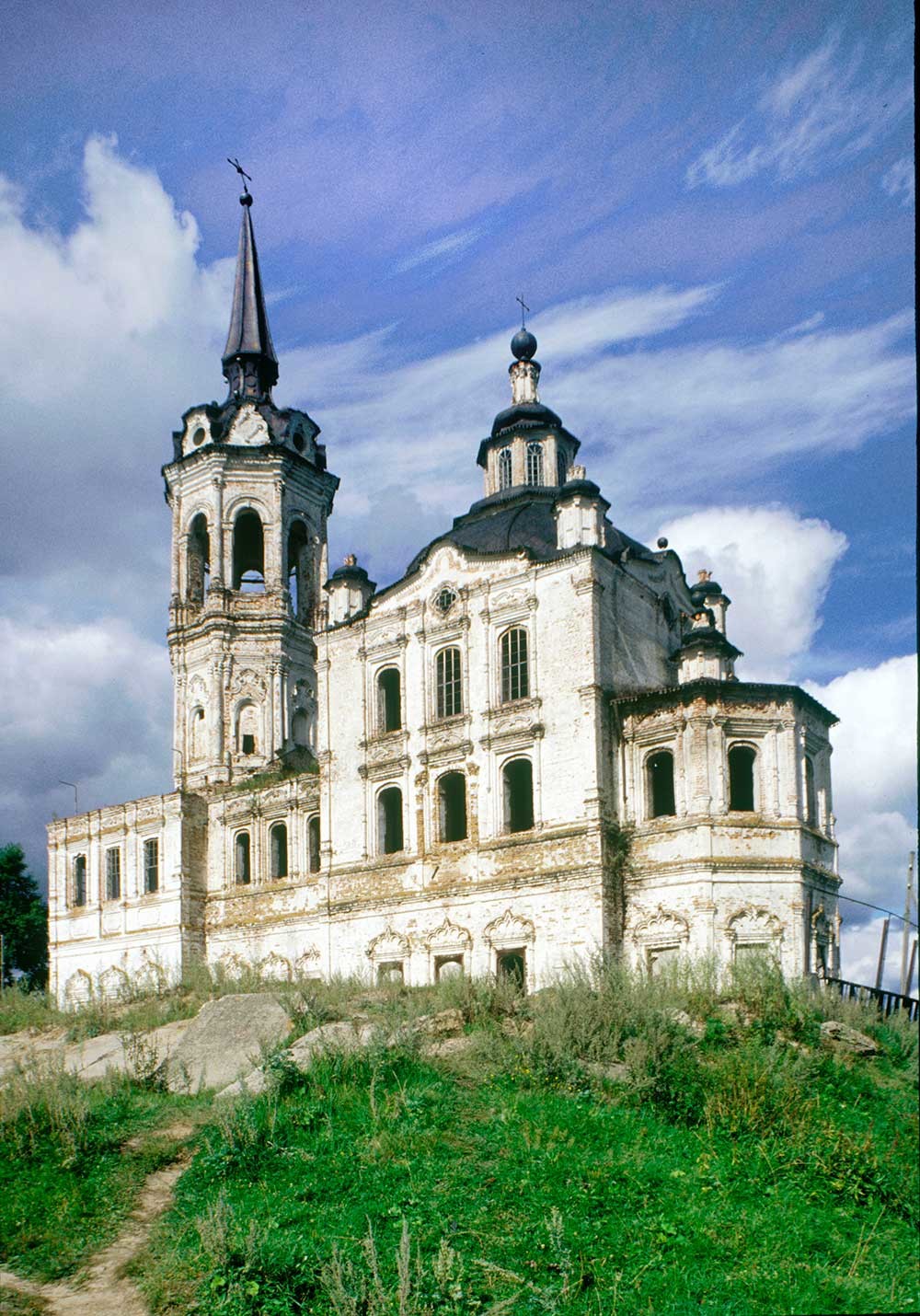 After the parish gathered funds to replace a log church, two merchants, the Medvedev brothers, donated a plot on which they had built a low artificial hill to protect their house from flooding. Construction of the church begin in 1753, and in 1761 the lower, heated church was completed, together with a vestibule attached to what had been the Medvedev house. Ten years later the upper, summer church was consecrated, yet a chronic lack of funds delayed completion of the bell tower until thirty years later, in 1784.

The Church of the Elevation of the Cross is distinguished by a harmony of height and proportion between the large main structure and the magnificent bell tower, which rises above a wide vestibule typical of 18th-century Tobolsk churches. The north facade provides further variety in the form of a long chapel built in 1790-98. 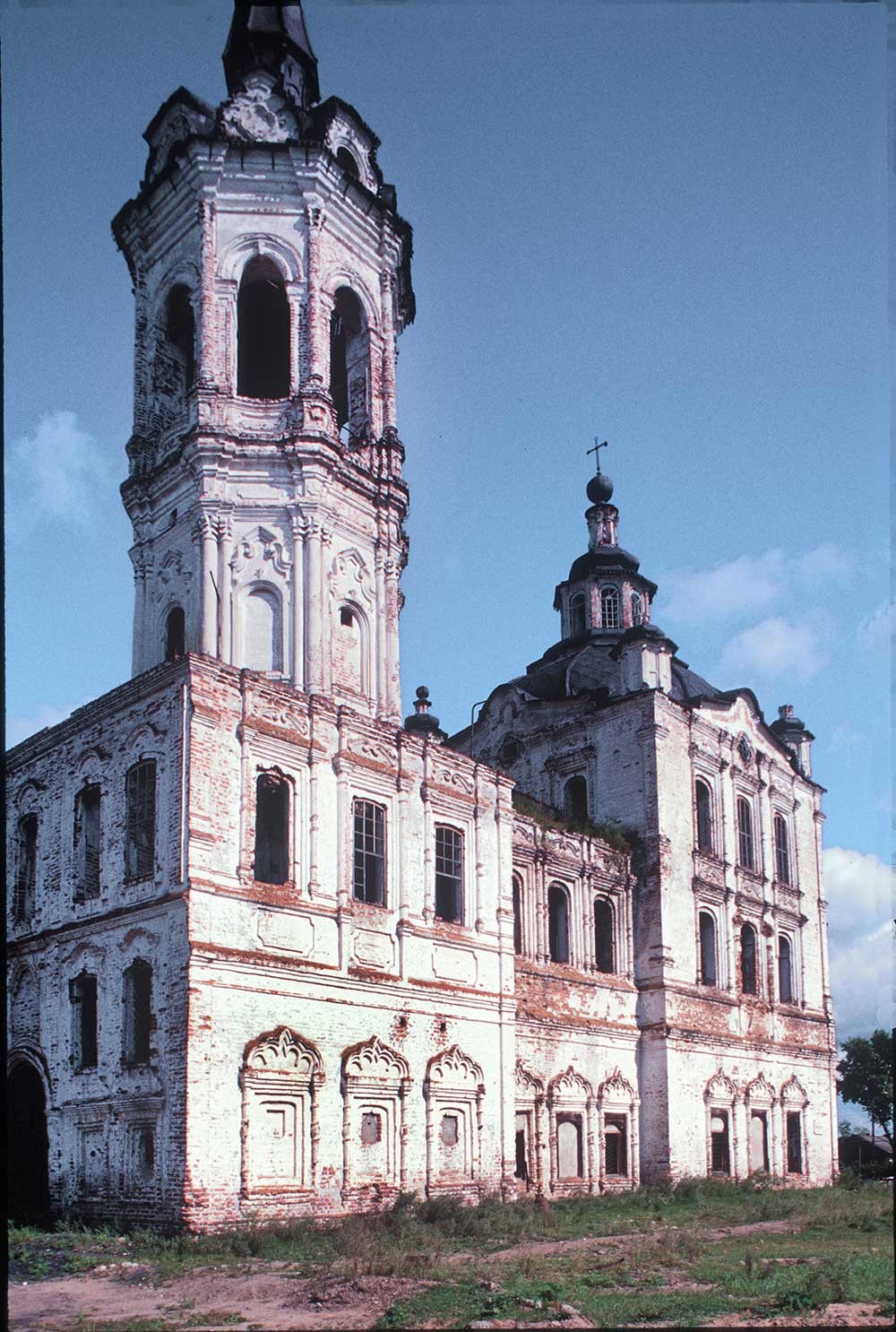 The interior was among the most highly decorated of Tobolsk churches, but very little remains in this gutted structure, which has been abandoned for decades. Efforts to conserve it have been undertaken, and there is a possibility that the church, which stands on ground, will be restored.

As in other Siberian towns, church architecture in Tobolsk suffered enormous destruction during the Soviet period, Despite difficult financial circumstances, gradual restoration efforts give hope that Tobolsk will regain its status as a center of late Baroque architecture. 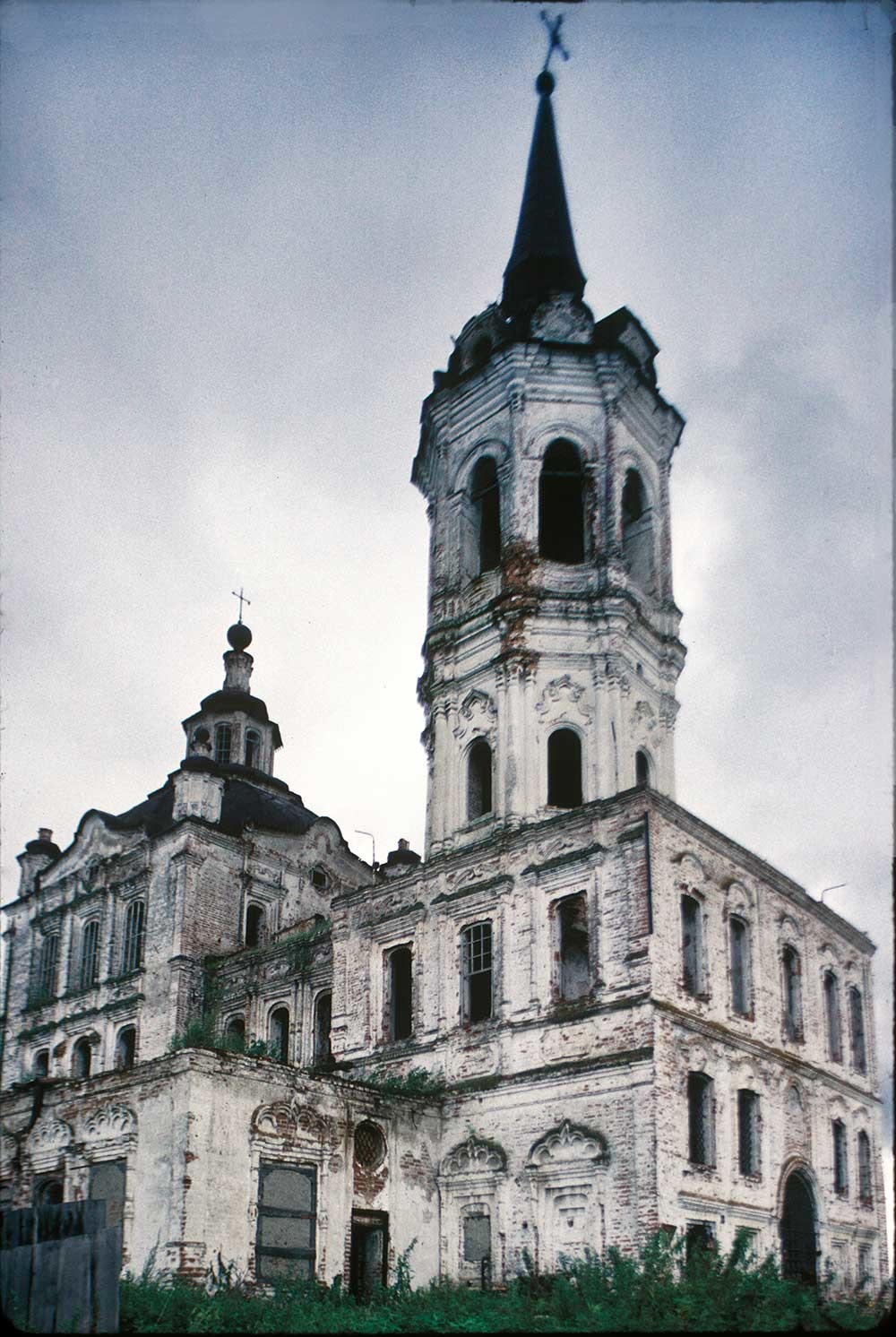 Church of Elevation of the Cross, northwest view. September 3, 1999.

In the early 20th century the Russian photographer Sergei Prokudin-Gorsky developed a complex process for color photography. Between 1903 and 1916 he traveled through the Russian Empire and took over 2,000 photographs with the process, which involved three exposures on a glass plate. In August 1918, he left Russia and ultimately resettled in France with a large part of his collection of glass negatives. After his death in Paris in 1944, his heirs sold the collection to the Library of Congress. In the early 21st century the Library digitized the Prokudin-Gorsky Collection and made it freely available to the global public. A number of Russian websites now have versions of the collection. In 1986 the architectural historian and photographer William Brumfield organized the first exhibit of Prokudin-Gorsky photographs at the Library of Congress. Over a period of work in Russia beginning in 1970, Brumfield has photographed most of the sites visited by Prokudin-Gorsky. This series of articles will juxtapose Prokudin-Gorsky’s views of architectural monuments with photographs taken by Brumfield decades later.