Meet the 68-year-old Russian who travels the world barefoot 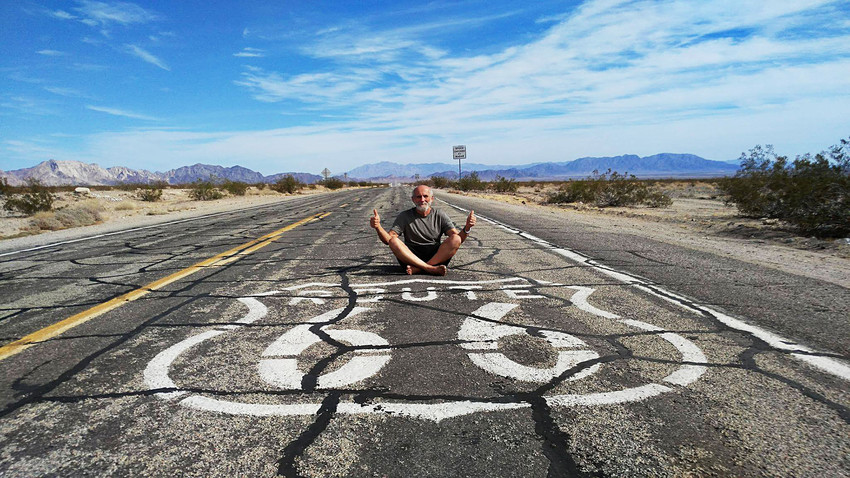 Vladimir Nesin
Retiree Vladimir Nesin believes his own childlike naivety is the defining trait that helped him brave even the most perilous regions of sub–Saharan Africa and without wearing anything on his feet.

“Whenever I find myself in a new land, I’m always interested to know how much earns, say – a driver. I withdraw the necessary amount, and live on that,” said Vladimir Nesin from Nizhnevartovsk, (Western Siberia), in an interview. “Drivers in Asia earn on average $100-120 a month, and I find it even easier to get by on that, seeing as they’ve got families to take care of and I have it all to myself.”

Barefoot citizen of the 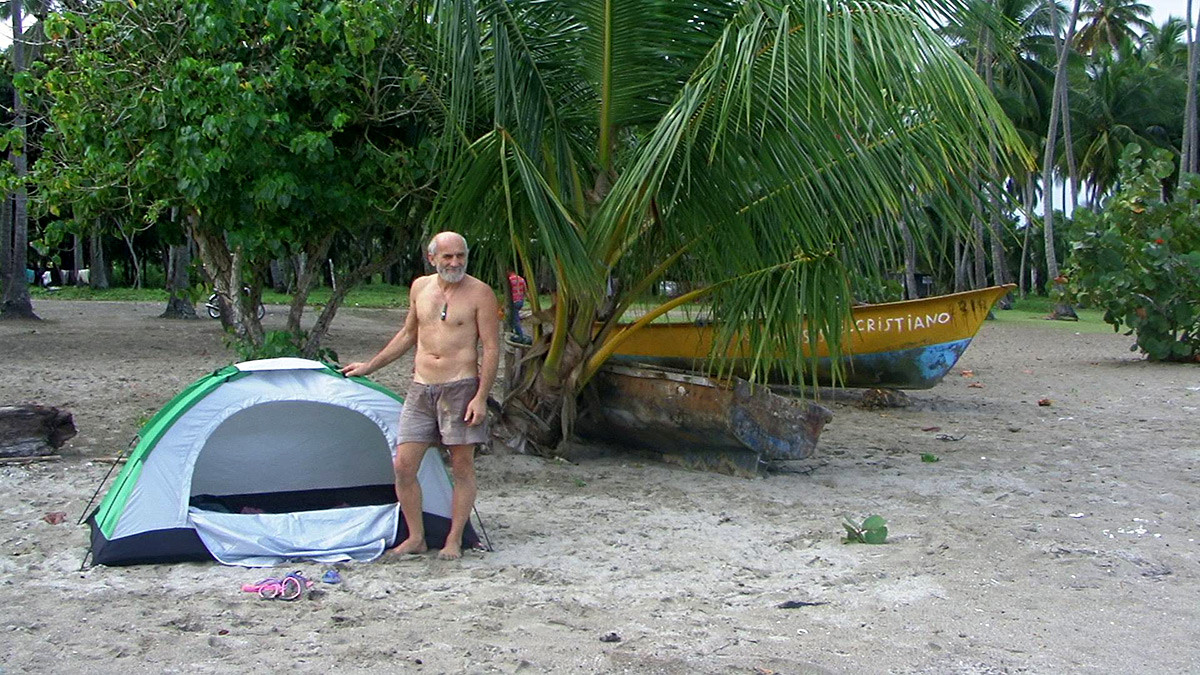 In the Dominican Republic.

the marvels of modern transportation, Nesin prefers to see the world on foot. “I ran around barefoot as a kid, and whenever I take my shoes off it’s like a return to my childhood. I’m always struck by a desire to take my shoes off,” says Nesin, who claims to only wear shoes in extreme circumstances.

He travels alone for the most but is sometimes accompanied by others at different stages of the journey. His main companion is his third wife, Veronica, the granddaughter of a First Nations chief in Canada. Together they traversed 55 countries in 10 years. His son from another marriage, Nikita, also has joined him on 33 trips. Those wishing to join can usually find Nesin online.

“Nobody is ever frightened by the prospect of traveling with me – they know they’ll be safe with me.” 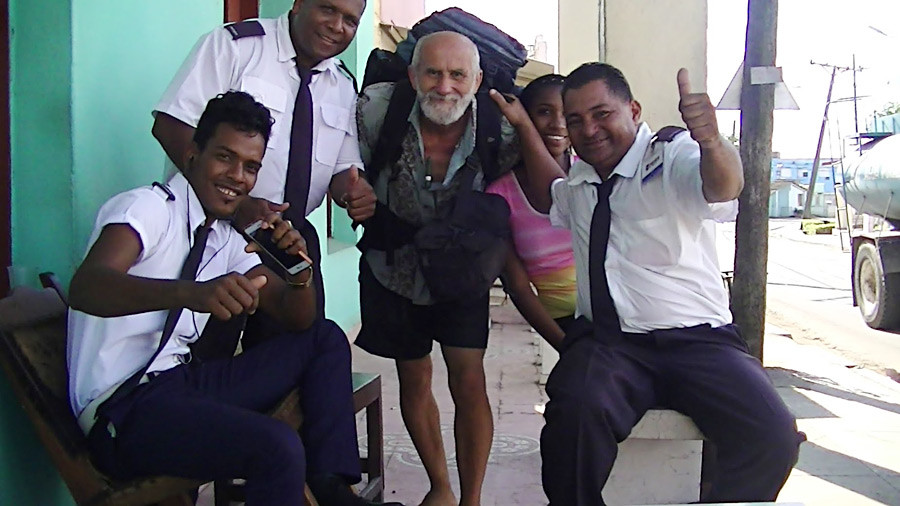 Despite visiting some of the more risky areas in sub-Saharan Africa, Nesin has never felt a real sense of danger and just doesn’t think about it. “I never read up on a place that I’d like to visit. I approach it the way a child would, taking it all in with my own eyes.” There is one crucial piece of advice Nesin has for would-be travelers though: learn to trust in others.

“They say this world is not without good people – and it’s true. Bad people are an exception to the rule. You need to treat others the way you’d like to be treated in return,” he says. 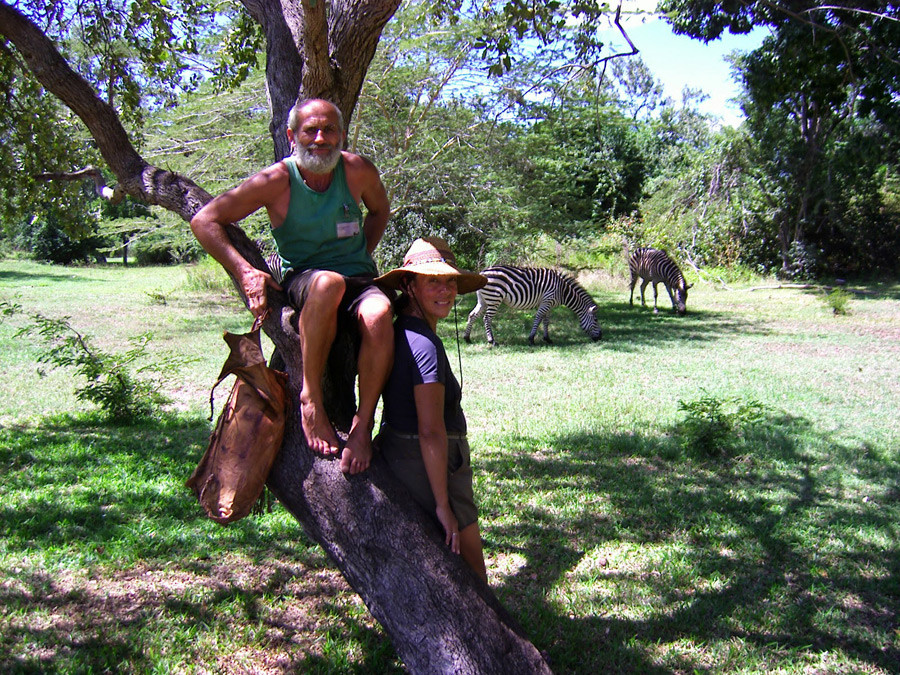 Aside from his Russian passport, Nesin also carries something called a World Passport. “Although it doesn’t really help with applying for visas, with it I feel like a real citizen of the world,” he says, adding that there is no single place he calls home, except Earth itself.

Nesin has friends and relatives across the world, including Canada, Ukraine, Germany Kazakhstan.

No meds, no health insurance

Nesin lives off of his Russian pension of 12,000 rubles ($190), and most of that money goes towards food. He hasn’t stopped at a hotel once in his 20 years on the road, preferring his tent instead, or weather permitting, roughing it under the stars. He also rarely travels by plane, but occasionally hitchhikes and uses other means of transportation when absolutely necessary. 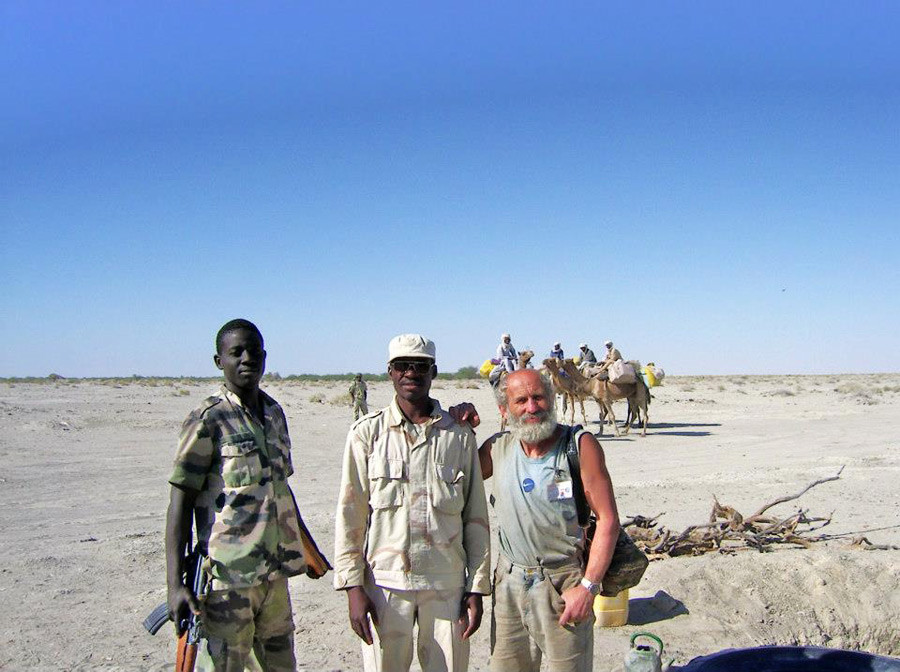 In the Republic of the Niger.

The traveler is adamant about taking medication, and won’t use health insurance either.

Packing is usually a and involves choosing a destination and getting there. “Once, my goal was to reach Australia, and all I did was walk in that direction.” 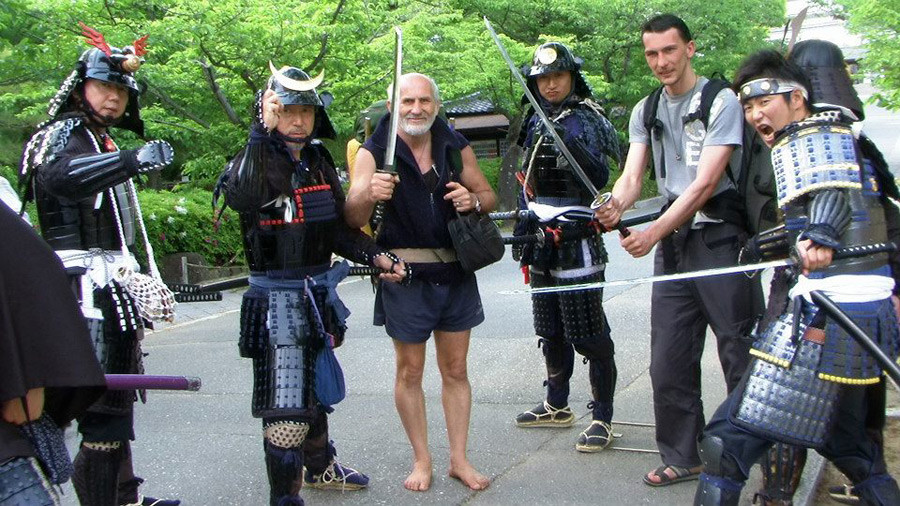 Nesin uses a 15-17 kg backpack, which accompanies him on his daily 25-kilometer trips on foot. “I always wear a t-shirt and shorts, and I carry a sleeping bag and a camping ,” he says. This modest setup lasts him around 9-10 months on average (the longest trip was 14 months). He might as well have gone but says he has to return to Russia once every three years to collect his pension.

Nesin first set off into the world at the end of the 1970s, in what was then the Soviet Union. He managed to traverse 15 Soviet republics in 20 years. It wasn’t until 1997, when he got his travel passport, that he finally took his first trip abroad. Complications arose almost instantly.

“The first time I wanted to travel abroad I applied for a Brunei visa, but they wouldn’t give me one, saying that my passport belongs to a country that no longer exists. In the new Russia, they were still giving out passports printed on templates left over from Soviet times.” 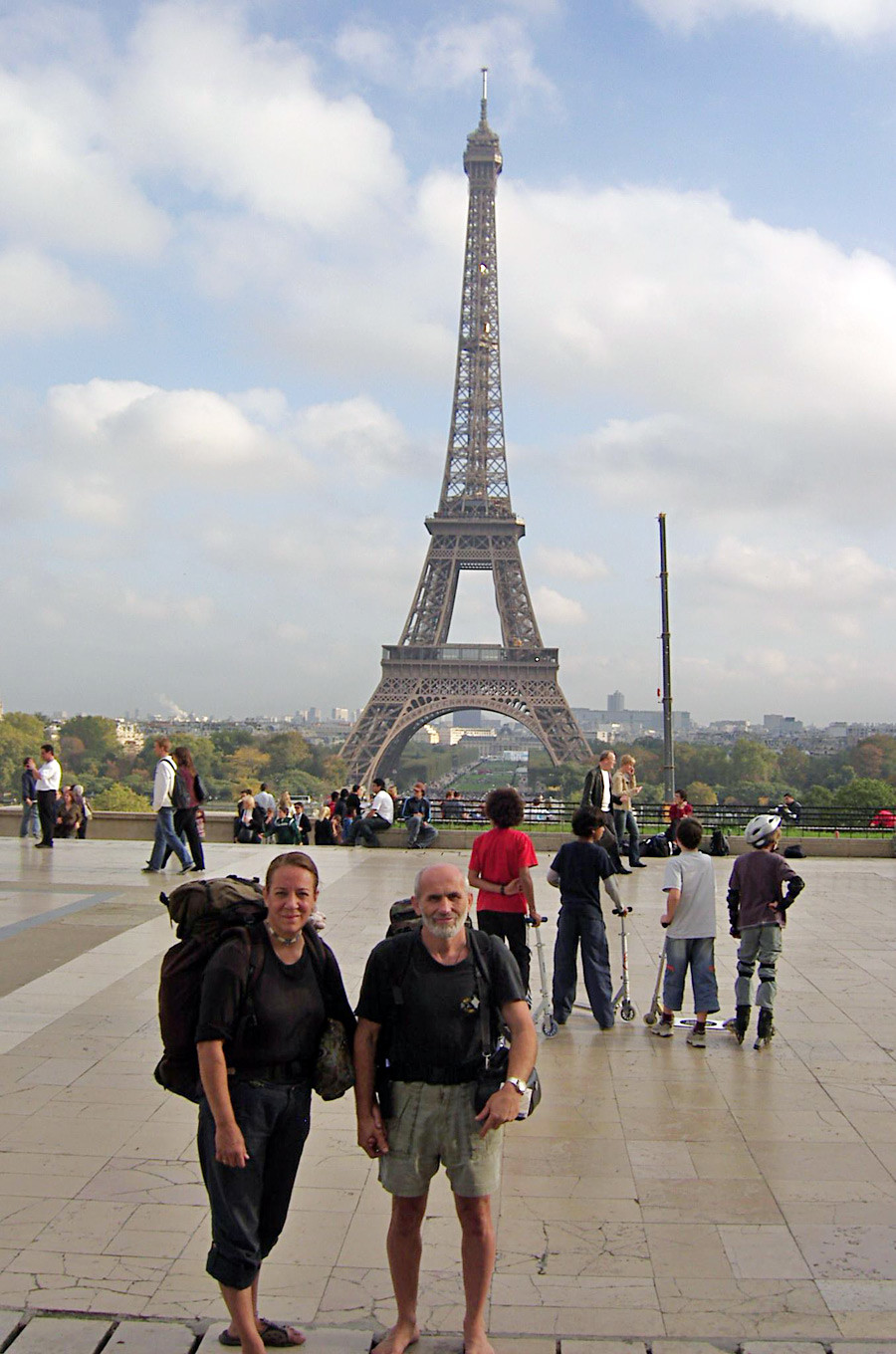 Nesin’s application was still a success, however. That year he visited Mongolia, China Laos, followed by Brunei, for a total of 5,000 kilometers barefoot over 11 months.

To date, he’s visited 146 countries, but that doesn’t mean Nesin is slowing down. He’s already made plans for Iceland or Greenland in the near future.

Before retiring, the traveling pensioner worked as a driver, an electrician a PE teacher. Nevertheless, when not traveling he teaches SAMBO (the Russian martial art) to kids in Nizhnevartovsk. 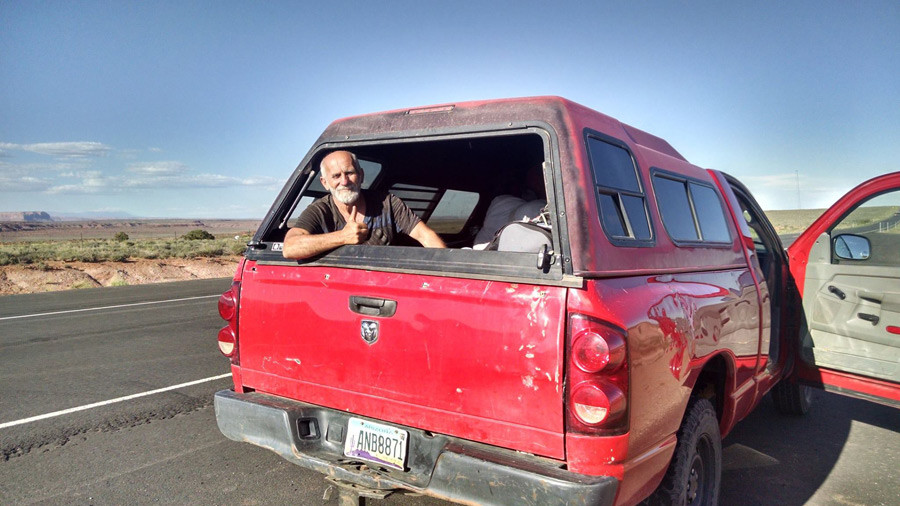 Visiting every country on Earth is not his goal. “I just enjoy the process itself,” he explains.

Nesin admits that there are places he could visit again and again, including Vietnam, Thailand, China, and Southeast Asia as a whole. He is self-taught in English and Spanish, and also has three books under his belt, all dealing with the topic of barefoot travel. He is now seeking a publisher for his latest work.