Resistance during the Time of Troubles: The monastery at Borisoglebsky 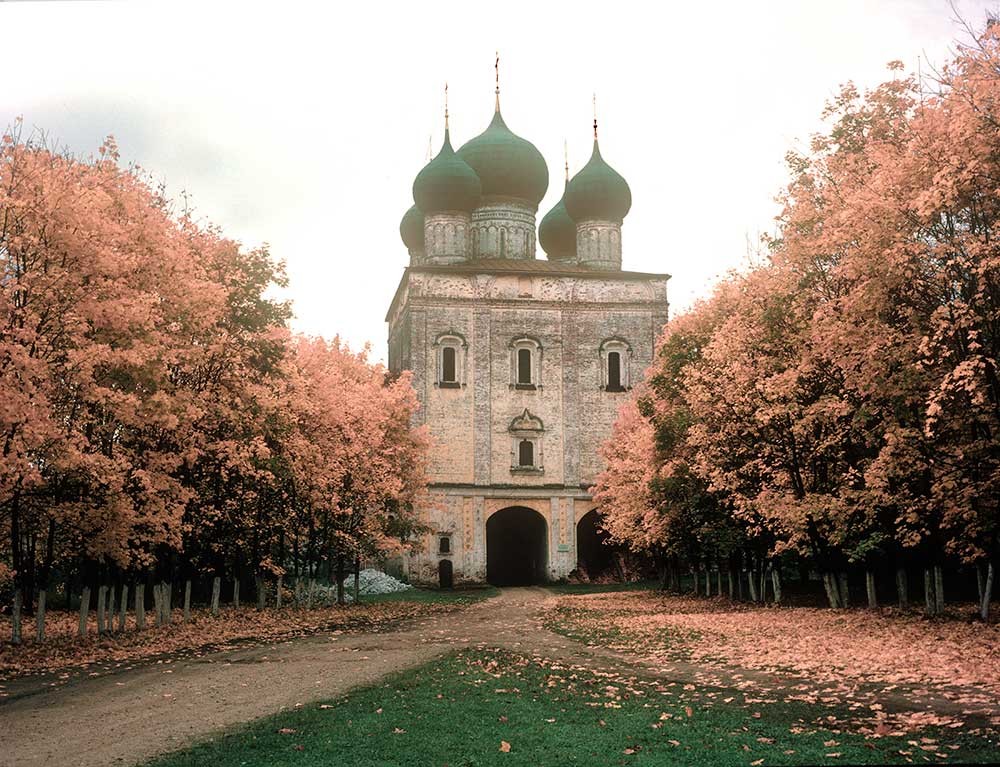 At the beginning of the 20th century, the Russian chemist and photographer Sergei Prokudin-Gorsky developed a complex process for vivid color photography. His vision of photography as a form of education and enlightenment was demonstrated with special clarity through his images of architectural monuments in the historic sites throughout the Russian heartland.

Support for his project came from the Ministry of Transportation, which facilitated his photography along Russia’s rail network and waterways. His trips along the Volga River proved especially productive, including the area around the historic towns of the Yaroslavl Province to the northeast of Moscow.

During his work in the area in the summer of 1911, Prokudin-Gorsky visited the small market town of Borisoglebsky, located on the ancient road between Rostov and Uglich. The object of his visit was the widely venerated Monastery of Sts. Boris and Gleb, dedicated to young Kievan princes martyred in the early 11th century. The monastery was founded in 1363 by the Novgorod monks Fyodor and Paul with the blessing of St. Sergius of Radonezh, the guiding light of Muscovite monasticism.

From these auspicious beginnings came further greatness. The monastery was soon favored by Muscovy’s rulers, including Tsar Ivan III (the Great, 1440-1505) who was baptized there in 1440. His son Basil III and grandson Ivan IV (the Terrible) continued the royal patronage. 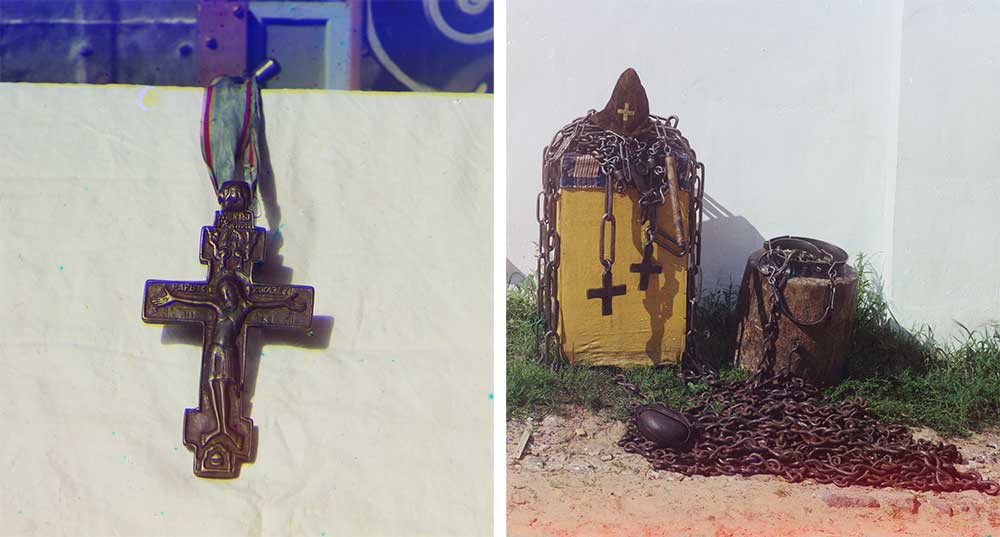 Masonry construction at the monastery began in the early 1520s, during the reign of Basil III, with the establishment of a brickworks. Monuments from that period include the Cathedral of Sts. Boris and Gleb, built in 1524, and the Refectory Church of the Annunciation (1524-1526)—both attributed to the master builder Grigory Borisov.

Ivan the Terrible (1530-1584) enhanced the monastery’s wealth and standing. However, his reign also created massive upheavals whose ramifications extended into the early 17th century during a dynastic interregnum and national crisis known as the Time of Troubles. The situation began to stabilize only in 1613 with the accession to the throne of Michael, the first Romanov tsar. 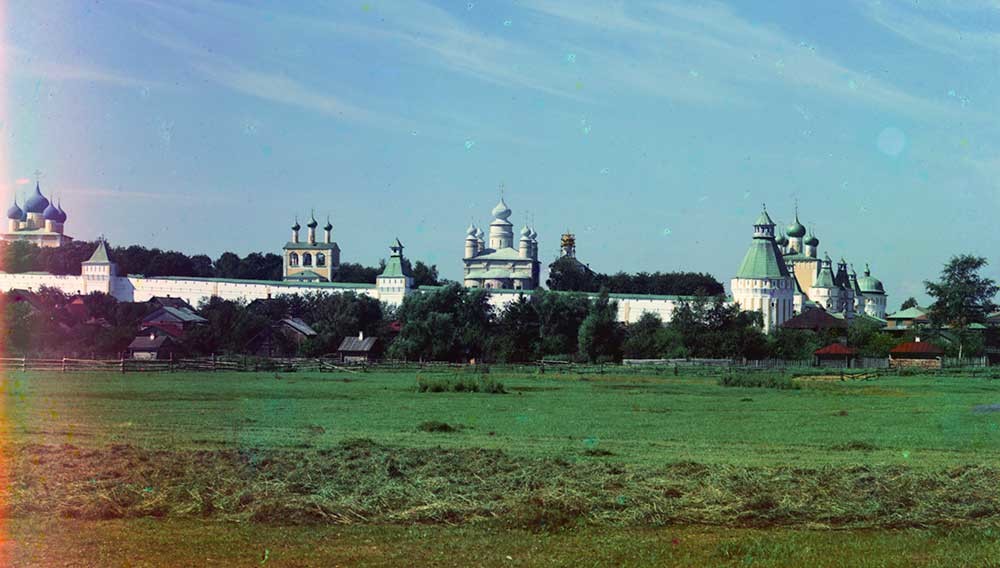 The dramatic life of a recluse

The Monastery of Sts. Boris and Gleb achieved its greatest renown not through these dramatic events, but rather through the life of a monk known as Irenarch, the Recluse of Rostov (1547-1616). A local merchant of peasant origins, Irenarch entered the monastery at the age of 30 and adopted a radically ascetic way of life. Among other observances, he wore heavy chains and crosses, some of which Prokudin-Gorsky photographed. 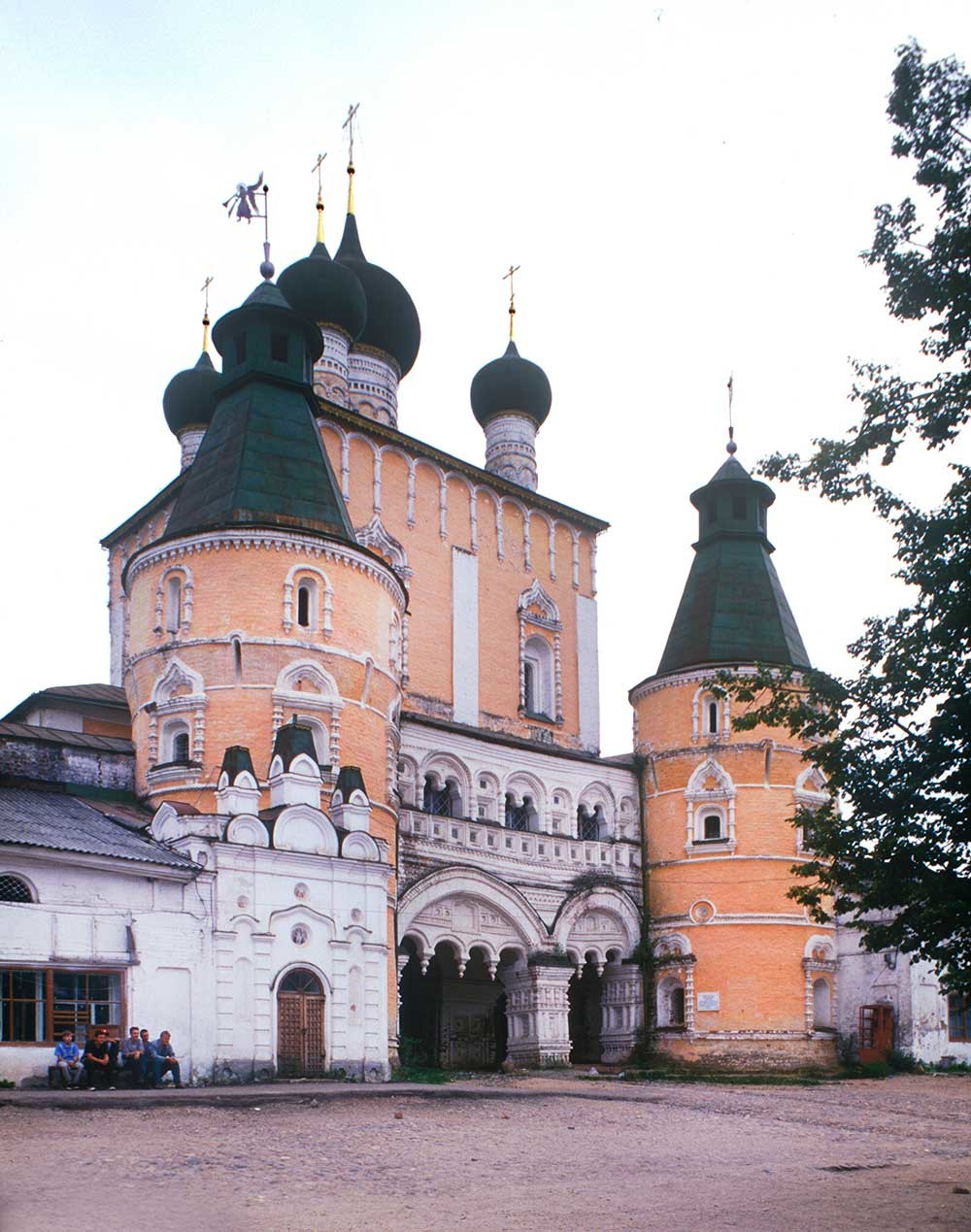 Irenarch eventually incarcerated himself in a tiny cell in the monastery’s east wall. As his fame increased, many sought his blessing. During the worst years of the Time of he agitated from his cell against Polish claims to the Muscovite throne and rallied support for national resistance to expel Polish-Lithuanian forces.

The high point in this advocacy occurred in 1612 when Irenarch gave his blessing to Prince Dmitry Pozharsky and Kuzma Minin, leaders of an army that retook Moscow in bitter fighting from late August to early October. It is said that Pozharsky and Minin considered Irenarch their spiritual advisor.

In the late 17th century, a major expansion of the monastery was undertaken with the support of the church prelate Metropolitan Jonah (Sysoevich), who built so much in neighboring Rostov. Not surprisingly, the architecture at Borisoglebsky owes much to the style of the “Rostov Kremlin” (Archbishop’s Court). 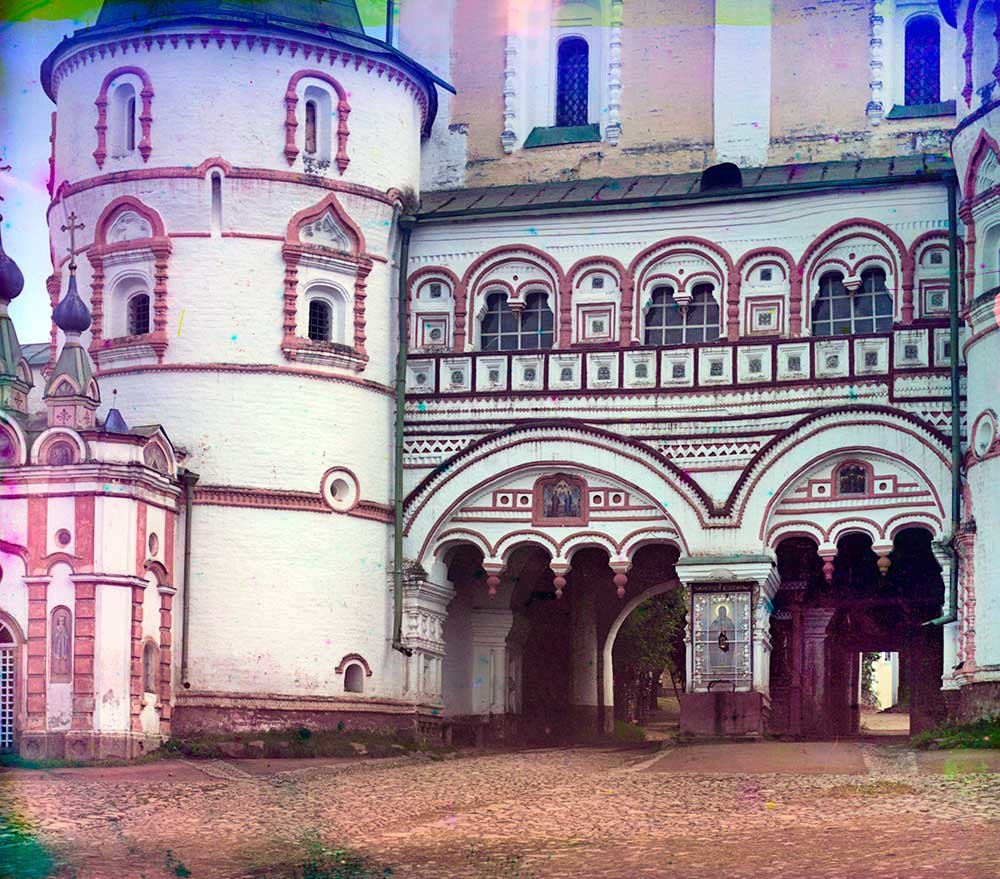 Monastery of Sts. Boris&Gleb. North Gate with the bottom tier of Church of the Purification, north view. Summer 1911.

The construction of the Rostov Archbishop’s Court focused on magnificent churches and their art; the walls were largely decorative. By contrast, the new Borisoglebsky walls were enormous, fortress-like on a scale that is reminiscent of the great St. Cyril Belozersk Monastery in Kirillov, which Prokudin-Gorsky also photographed. For example, the east wall of the trapezoidal fortress was 330 feet long, 40 feet high and 8 feet thick.

A past preserved in photographs

By the reign of Peter the Great, building resources were redirected to the new city of St. Petersburg, and much monastic wealth was confiscated. 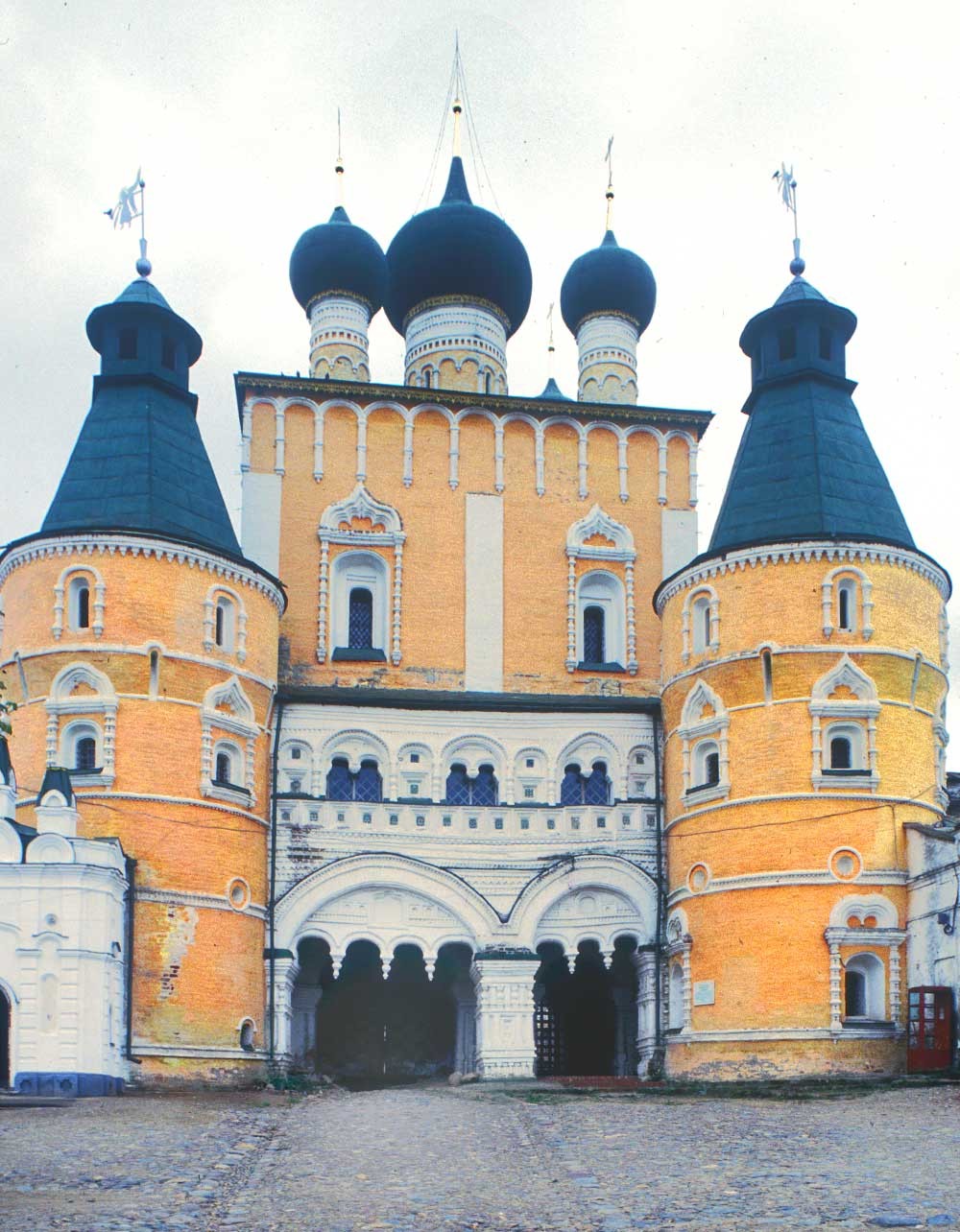 Church of the Purification over North Gate, north view. October 4, 1992.

This process continued with the secularization of monastic lands during the reign of Catherine the Great, who gave the monastery’s primary holdings to Prince Grigory Orlov. The status of the Monastery of Sts. Boris and Gleb was substantially reduced, although it remained a pilgrimage site throughout the 19th century and early 20th when Prokudin-Gorsky visited.

Among his several photographs is a sweeping view of the ensemble from a broad pasture to the east. This magnificent perspective shows the full scale of the monastery, including the Church of St. Sergius of Radonezh over the South gate (far left; around 1680), the east wall and towers (late 17th century), the belfry and Church of John the Baptist (1682), the Cathedral of Sts. Boris and Gleb, the Church of the Annunciation and the northeast corner tower. By the time of my visit in 1992, this view was obscured, but the photographs convey the scale of the walls. 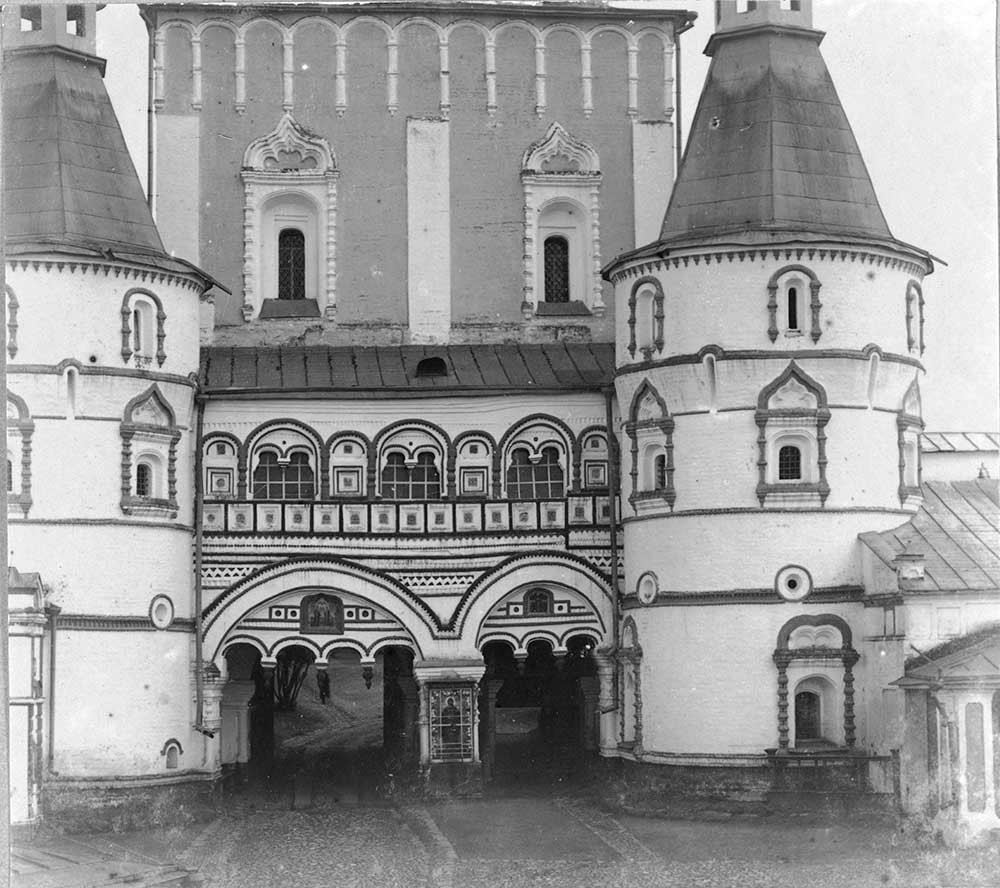 Prokudin-Gorsky’s closer views include the picturesque North, or Water, Gate with flanking chapels and round towers in the north wall. The decorative details are outlined in red paint. Especially vivid are the pendants (girki) at the top of the gate arches. 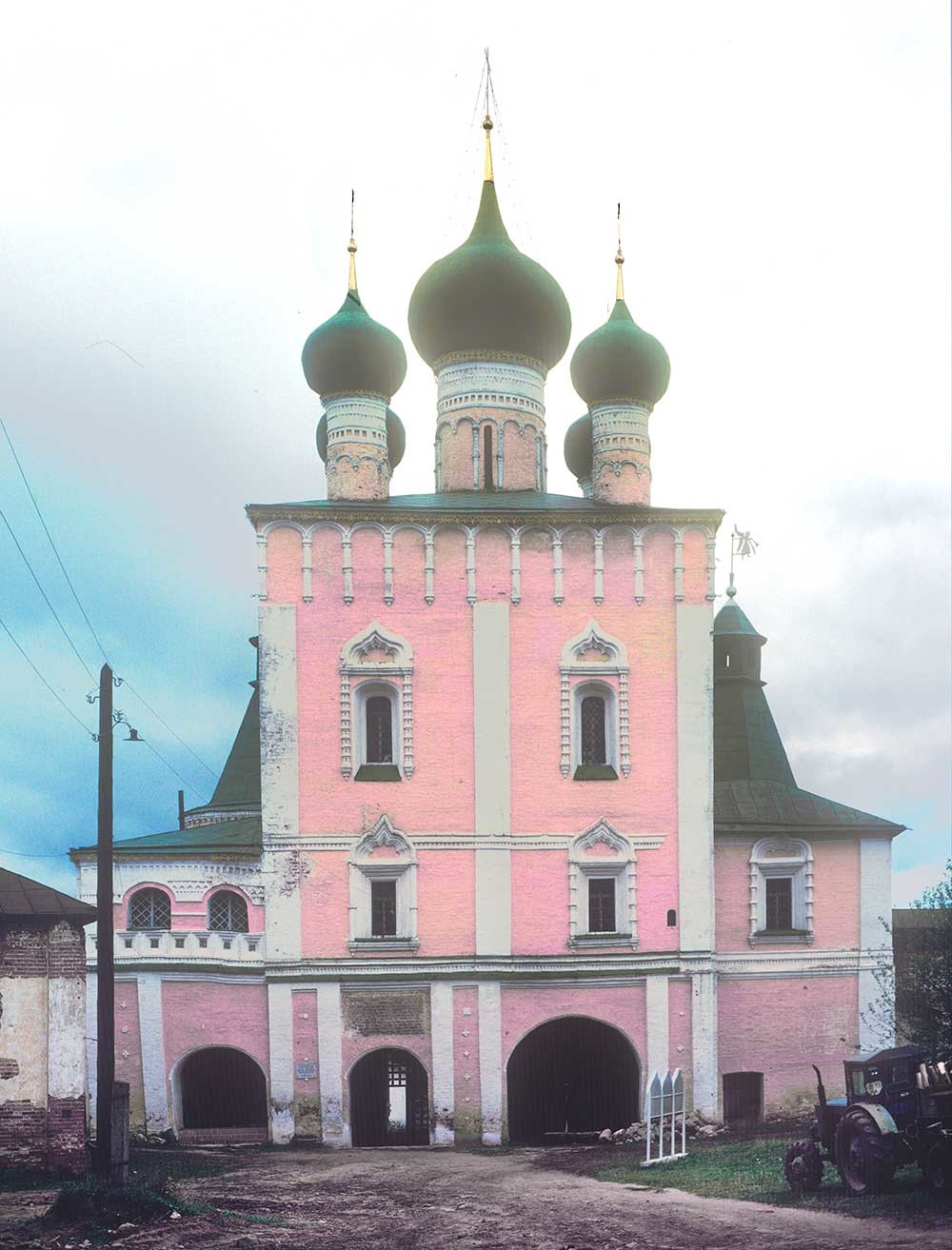 Church of the Purification over North Gate, south view. October 4, 1992.

Visible above the gateway is the lower part of the north façade of the Church of the Purification. The date usually given for this distinctive monument is 1680, although its completion could have been a decade later. The town market lay in the shadow of the gate church, yet Prokudin-Gorsky found a time when the space, with its cobbled pavement, was strangely empty. My photograph gives a wider sense of the structure. 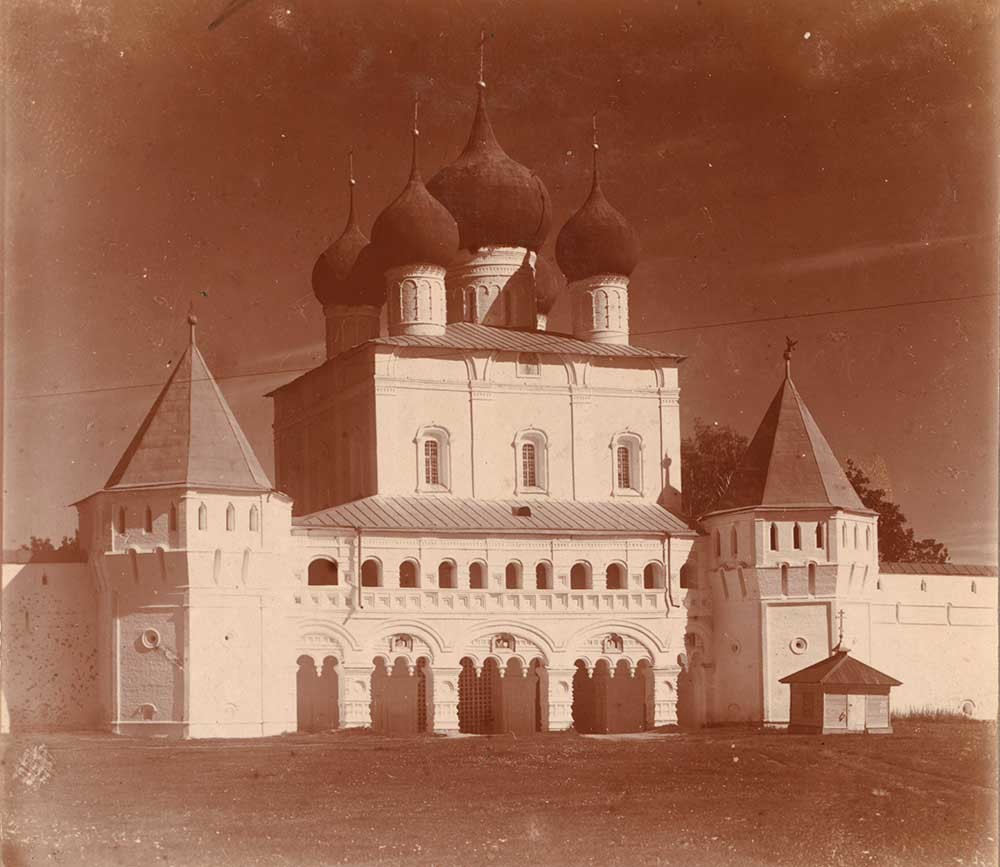 Prokudin-Gorsky also photographed the south gateway, surmounted by the Church of St. Sergius. Unfortunately, the original glass negative is missing, but the contact print is very informative. Without surrounding market buildings, the South Gate offers a clearer view of late 17th-century decorative exuberance.

Closed in 1924, the Monastery of Sts. Boris and Gleb survived as an architectural ensemble largely through its conversion to a local history museum. Seventy years later, in 1994, parts were returned to the Russian Orthodox Church, which now has possession of the entire ensemble. The prolonged, complicated process of restoration continues to the present 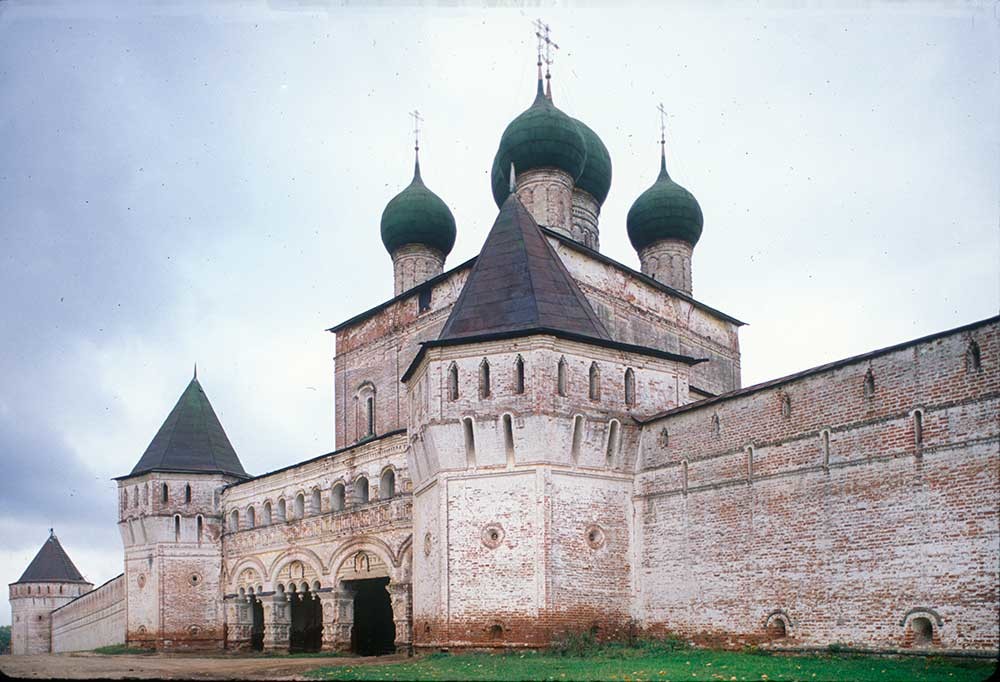 the early 20th century the Russian photographer Sergei Prokudin-Gorsky developed a complex process for color photography. Between 1903 and 1916 he traveled through the Russian Empire and took over 2,000 photographs with the process, which involved three exposures on a glass plate. In August 1918, he left Russia and ultimately resettled in France with a large part of his collection of glass negatives. After his death in Paris in 1944, his heirs sold the collection to the Library of Congress. In the early 21st century the Library digitized the Prokudin-Gorsky Collection and made it freely available to the global public. A number of Russian websites now have versions of the collection. In 1986 the architectural historian and photographer William Brumfield organized the first exhibit of Prokudin-Gorsky photographs at the Library of Congress. Over a period of work in Russia beginning in 1970, Brumfield has photographed most of the sites visited by Prokudin-Gorsky. This series of articles will juxtapose Prokudin-Gorsky’s views of architectural monuments with photographs taken by Brumfield decades later.