The magnificent frescoes of Yaroslavl: The Church of John the Baptist at Tolchkovo

Travel
William Brumfield
Restoration of the world-renowned artwork in this city of churches is ongoing. 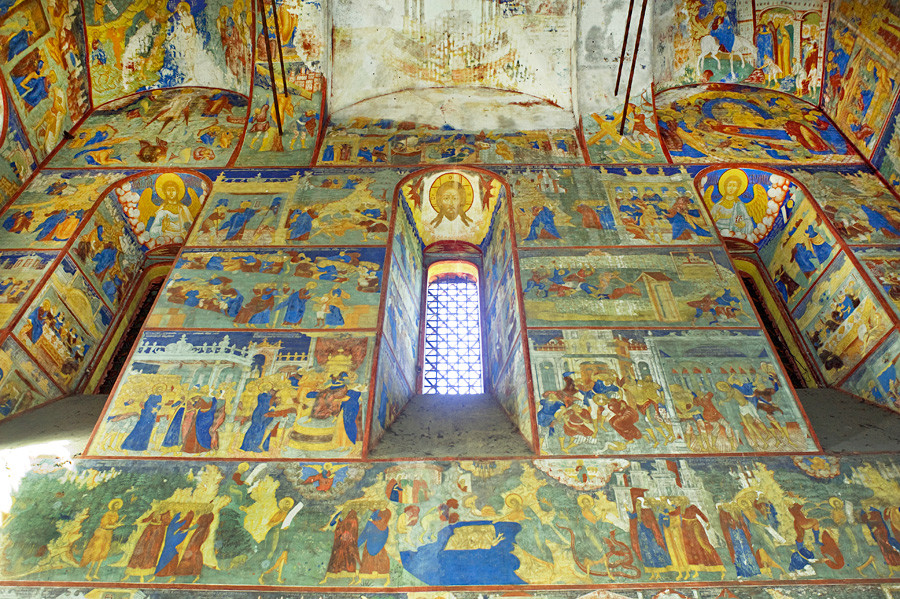 The city of Yaroslavl, located on the Volga River 150 miles northeast of Moscow, has one of Russia’s greatest concentrations of church architecture and art, including a number of magnificent 17th-century frescoes. During his travel along the Volga in the summers of 1910 and 1911, the photographer Sergei Prokudin-Gorsky worked extensively in the churches of Yaroslavl. My photographic documentation of Yaroslavl’s churches extends three decades, from 1987 to 2017.

One Yaroslavl monument, the Church of the Decapitation of John the Baptist at Tolchkovo, fascinated not only Prokudin-Gorsky but also the eminent artist Vasily Vereshchagin, who visited the church in 1888 and made sketches and paintings of the church galleries. All three of us worked in the same space, and in a departure from the usual practice for these articles, I decided to include one of Vereshchagin’s views in addition to two interior photographs by Prokudin-Gorsky. 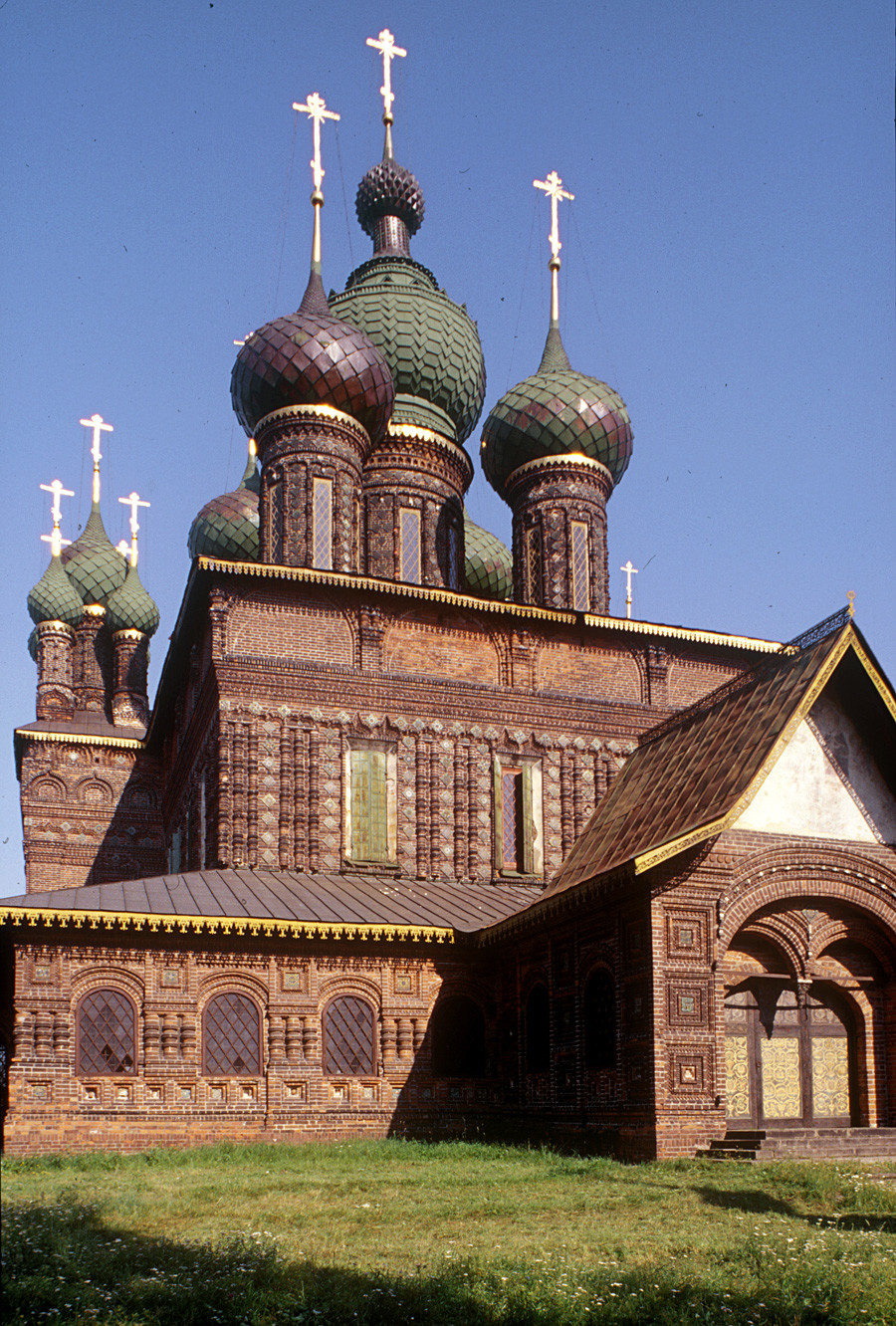 As seen below, the Vereshchagin paintings not only summon the mysterious aura of the frescoes, but they also convey the relation of the art to people — pilgrims, peasants townsfolk. Of special interest are Vereshchagin’s depictions of the north gallery, one of which includes a woman elegantly dressed in black, an enigmatic figure suggestive of a Chekhov story.

Constructing the John the Baptist Church

In 1671, Jonah Sysoevich, the powerful Metropolitan of Rostov, approved a proposal for the construction of a new church in the prosperous Tolchokovo district near that Kotorosl River, a small tributary of the Volga. The Church of the Decapitation of John the Baptist was created between 1671 and 1687 with support from local parishioners and donors from Kazan. Leading benefactors included the Yeremin family, whose wealth derived from leather workshops located in the district. 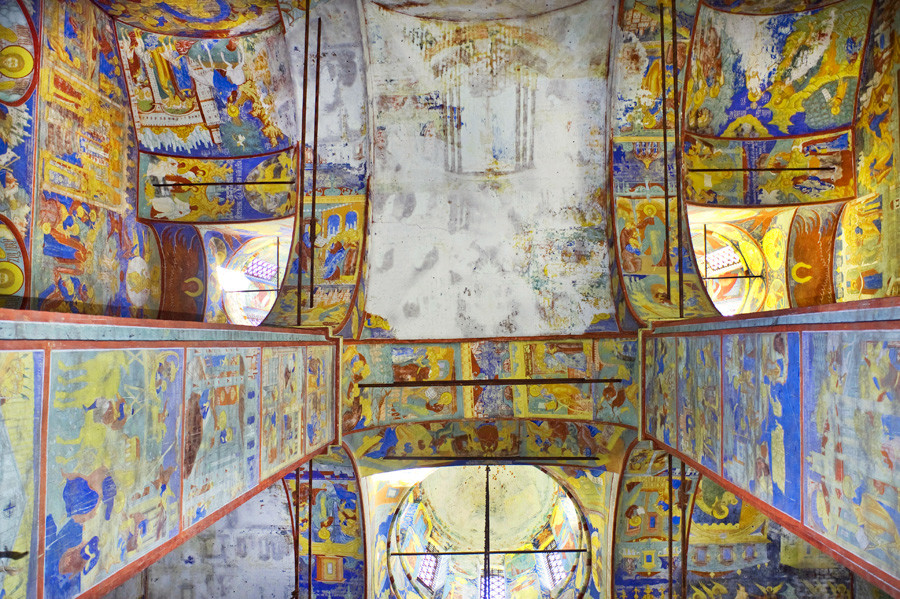 The plan of the Tolchkovo church included an enclosed gallery attached the north, west and south sides of the rectangular main structure. The north and south galleries led at their east end to chapels dedicated respectively to the Three Prelates — Basil the Great, St. Gregory the Divine and St. John Chrysostom — and to the Kazan Miracle-Workers, Sts. and Varsonofy.

The monumental exterior of the Church of John the Baptist leads to an equally remarkable interior covered with frescoes. It is something of a miracle that the Tolchkovo ensemble and the frescoes have, for the most part, survived. During the 1930s, a large chemical plant that produced paints expanded on the adjacent territory, and the church was used for storage, including harsh chemicals. Fortunately, the Yaroslavl Museum eventually regained control of the space. 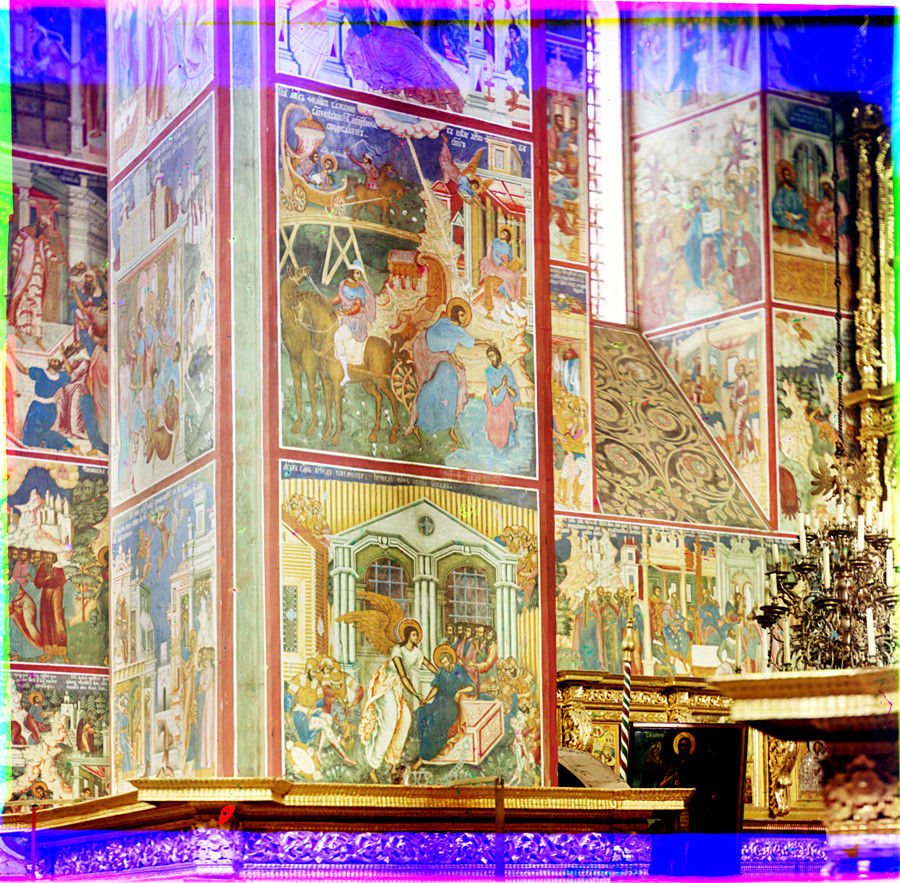 There is at least basic information about the masters whose work covers the walls of this large interior, from the galleries and side chapels to the altar. The main space was painted from June 1694 to July 1695 by a group of 16 artists under the guidance of Yaroslavl masters Dmitrii Grigorev Plekhanov and Fedor Ignatiev, who also did frescoes for the side chapels in 1700.

Plekhanov was already renowned for his work at the Archangel Cathedral in the Moscow Kremlin, and at other major churches in Rostov, Yaroslavl Vologda. Ivan and Andrei Yeremin provided major support for the vast project, which included over 500 segments with some 2,000 motifs — the largest such ensemble in Yaroslavl and, by some calculations, in the Orthodox world. 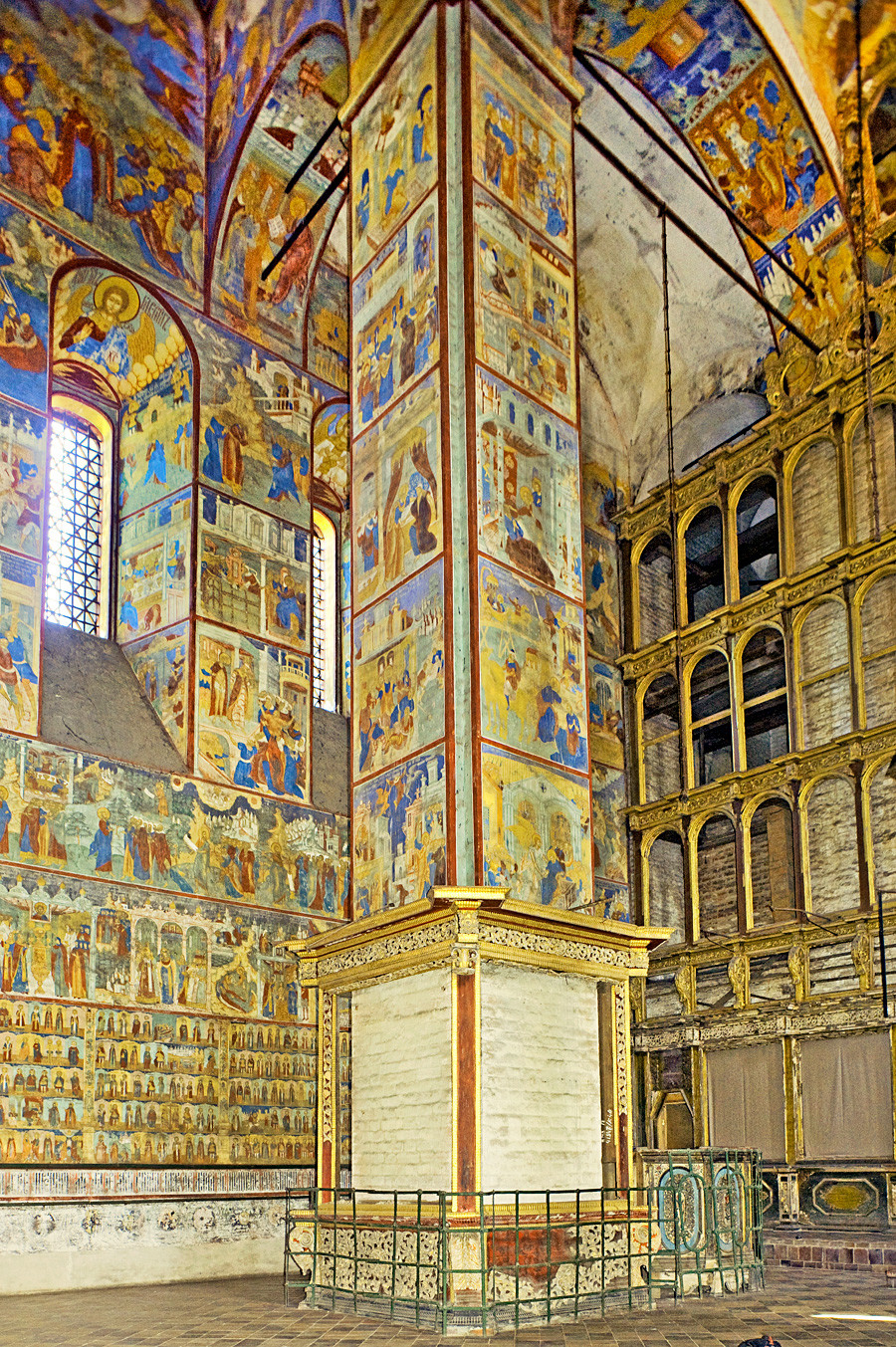 The seventh register from the top displays an unusual rendering of scores of Orthodox saints arranged by the days of the calendar. The bottom two levels of the north and south walls consist of an inscription band about the church and a decorative border. At the very top, the ceiling vaults show major festivals such as the Dormition. As usual, the central dome contains a portrayal of Christ Pantocrator (ruler of the world).

Of the four massive piers that support the ceiling vaults, only the two west piers are visible in the main space. The east piers are concealed behind an elaborately carved six-tiered icon screen originally made over a period from 1687 to 1701. After the closing of the parish in the early 1930s, the icons were removed for conservation.

Prokudin-Gorsky photographed vivid details on the lower part of the south face of the northwest pier. The two scenes depict the Apostle Peter escaping from prison and the Baptism of the Ethiopian Eunuch by the Apostle Philip. My view with a wide lens gives a sense of the space around the pier, including the north wall and the frame of the icon screen.

However impressive the main space, the frescoes that cover the enclosed galleries ( in Russian) seem more lively and accessible because of the lower ceiling vaults. They were completed in 1703-04 with the support of Metropolitan Dmitry of Rostov, a leading prelate during the reign of Peter the Great. 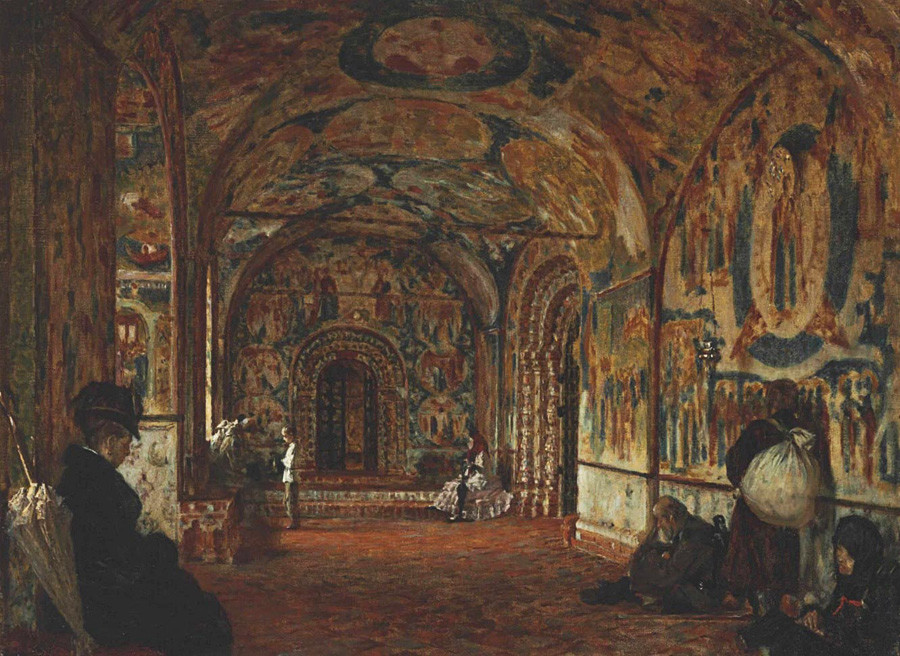 Vasily Vereshchagin. Gallery (papert) of Church of John the Baptist at Tolchkovo. Painted in 1888 in the north gallery of the church.

The curved ceiling vaults of the gallery display episodes from the Old Testament, such as the Fall of Jericho and the Six Days of Creation. The walls include depictions of the Seven Sacraments, the Last Judgement, the Fruits of the Paschal Mystery as well as scenes from edifying literary works such as The Great Mirror (Speculum Maius), a 13th-century encyclopedic compendium whose fragments appeared in Russian during the 17th century. The didactic nature of these scenes — often accompanied by texts — can be related to the use of the gallery as a resting place for pilgrims who visited the church, as well as a space for parishioners and others who came to the church for Confession and to speak with the priests.

The didactic aspect of this public gallery space was captured in evocative paintings by Vasily Vereschagin, including a view of the north gallery. Amid the humble folk depicted here, we see a woman of means, dressed in black with a bright parasol nearby. Does the black indicate mourning? It seems plausible that Vereshchagin was acquainted with this mysterious figure, self-possessed and socially distinct from those around her. 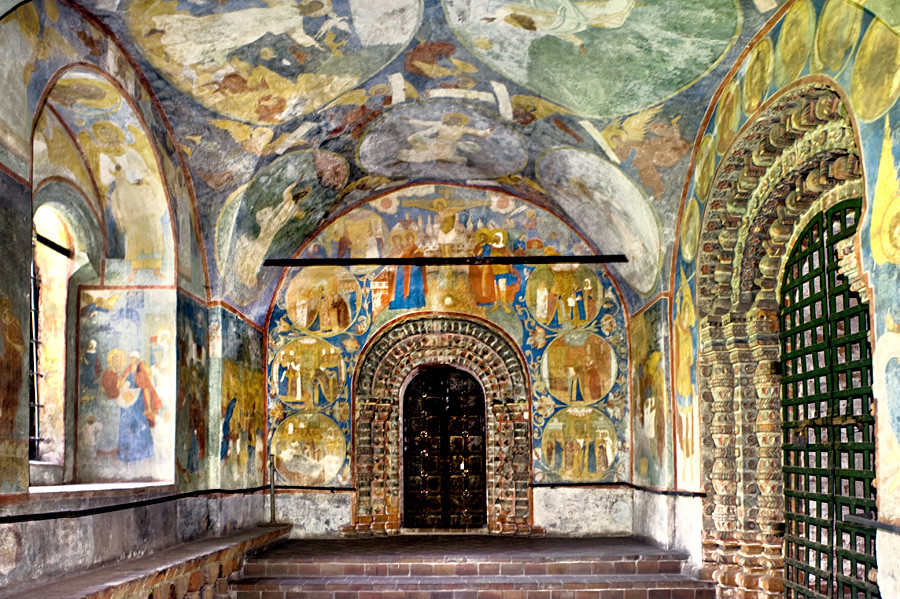 In 1992 and again in 2017, I photographed this space from a slightly different perspective. The photographs demonstrate Vereshchagin’s inspired fidelity to the frescoes, especially in his rendering of the Crucifixion above the portal to the northeast chapel.

After painting these and other scenes of the Yaroslavl area during the summer of 1888, Vereshchagin made a long-planned trip in the fall to the United States, where he exhibited his paintings to acclaim in New York and other cities. Early the next year he published an illustrated essay on traditional Russian culture (including the Tolchkovo church) in the February issue of Harper’s New Monthly Magazine. 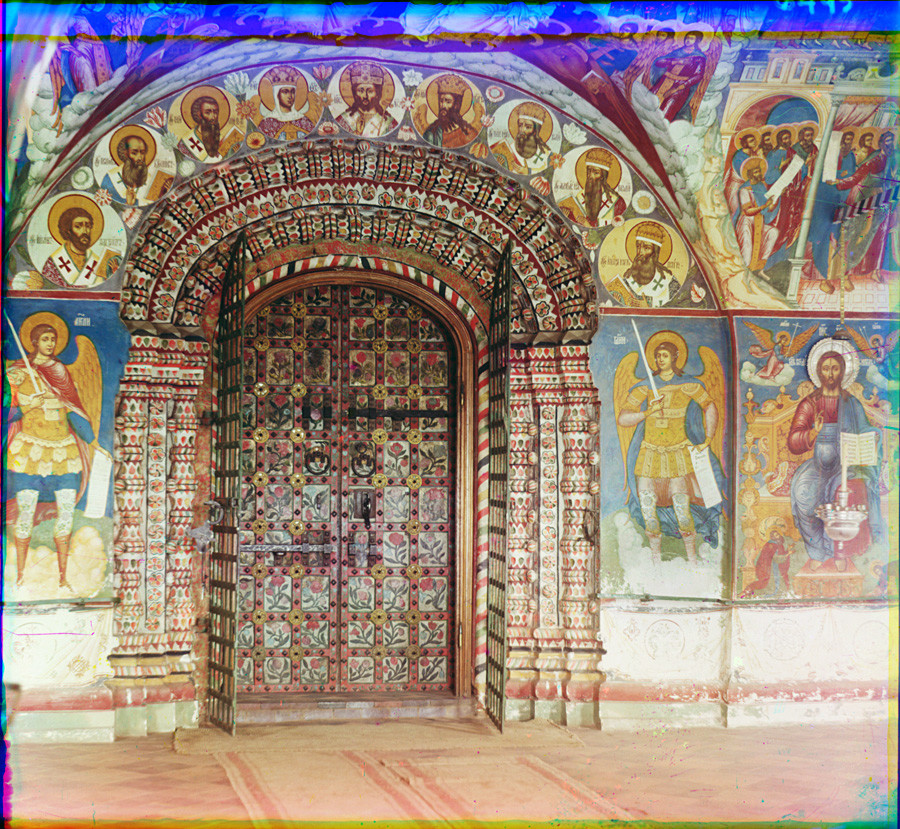 Church of Decapitation of John the Baptist at Tolchkovo. West gallery with main portal. Summer, 1911.

Some two decades after Vereshchagin’s visit, Prokudin-Gorsky photographed the gallery’s main (west) portal, which had recently been repainted. From my I chose a view showing the left edge of that portal and the gallery walls that extend to the north, where Vereshchagin took his views. 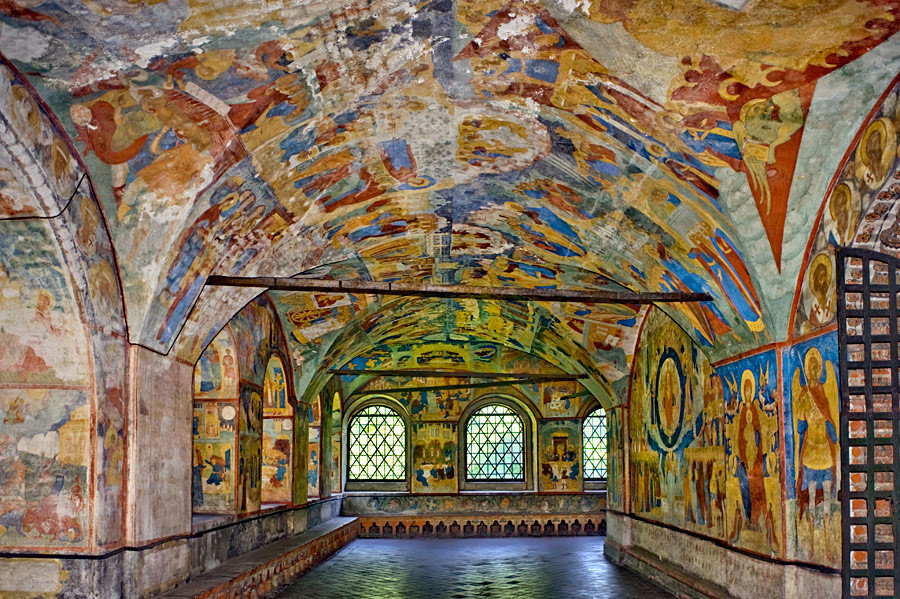 The Tolchkovo frescoes — both in the gallery and in the main space — show the influence of engravings from 16th and 17th-century Bibles of German and Dutch origins. (During this period Yaroslavl had extensive mercantile connections with Dutch merchants.) Fanciful Western architectural details occur throughout the fresco backgrounds, while the figures themselves display colorful “Western” dress. This festive, imaginative presentation of religious scenes provides an encyclopedic sense of the prosperous cultural milieu of Yaroslavl in the late 17th century.

The value of the Tolchkovo frescoes was widely acknowledged in the 19th century when the church was visited by numerous august personages from the imperial court. Sustained efforts to conserve and restore the treasured frescoes began at the turn of the 20th century and continue to the present. 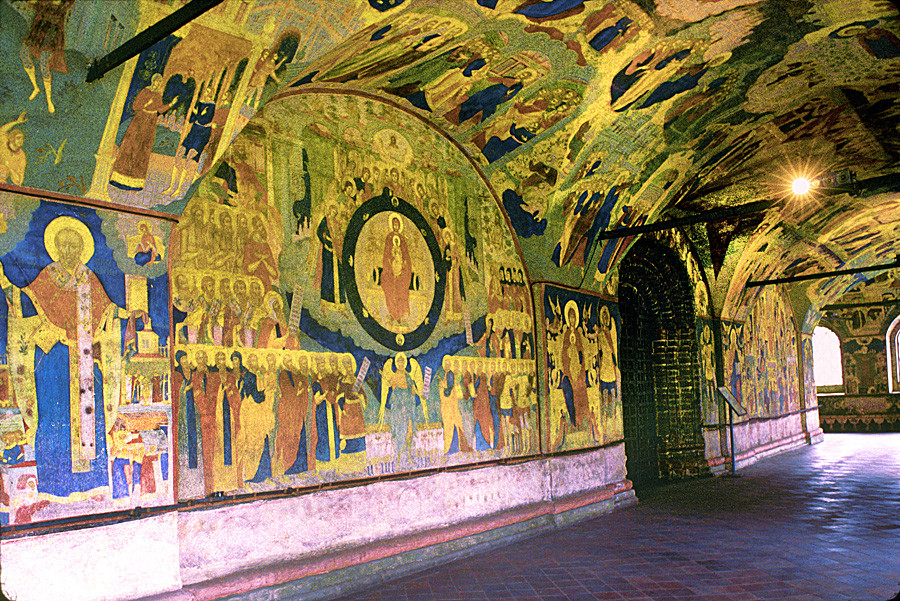