Church of John the Baptist at Tolchkovo: Crowning Glory of Yaroslavl 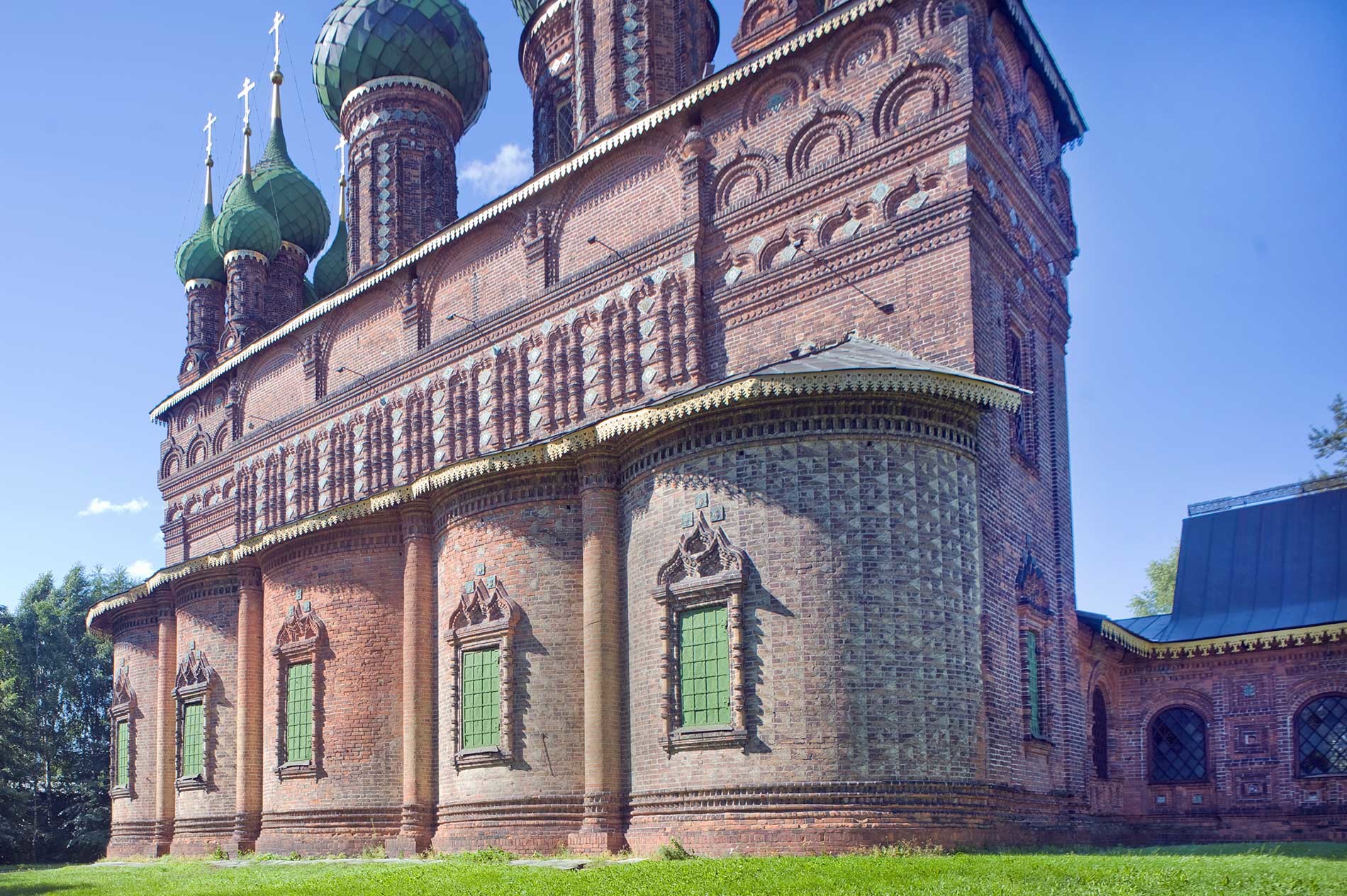 At the beginning of the 20th century, the Russian chemist and photographer Sergei Prokudin-Gorsky devised a complex process for vivid, detailed color photography (see box text below). His vision of photography as a form of education and enlightenment was demonstrated with special clarity through his photographs of architectural monuments in the historic sites throughout the Russian heartland. Logistical support for project came from the Ministry of Transportation, which facilitated his photography on Russia’s waterways and expanding rail network. His trips along the Volga, the country’s greatest river, proved especially productive. 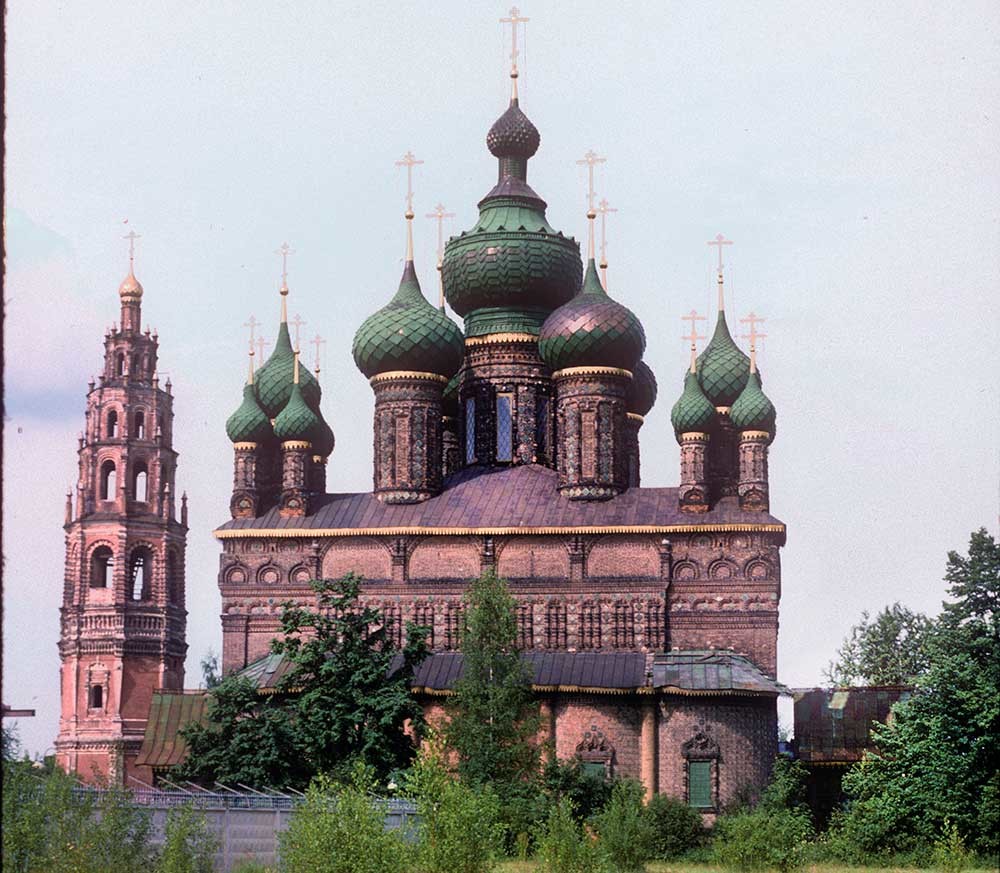 One of Russia’s richest historic sites the city of Yaroslavl, located on the Volga about 150 miles northeast of Moscow. Now an industrial center of some 650,000 inhabitants, Yaroslavl was one of the greatest cities of medieval Rus. It features one of Russia’s greatest concentrations of church art and architecture from the 16th through the 19th centuries. Prokudin-Gorsky photographed there in the summers of 1910 and 1911. My work in Yaroslavl extends three decades, from 1987 to 2017.

Founded in the early 11th century by Yaroslav the Wise — one of the greatest rulers of medieval Rus — by the early 13th century, the city already had masonry churches within monasteries, unusual in a time when most buildings were of logs. In 1238, Yaroslavl was sacked by the Mongols during their conquest of central Russia. Although recovery from Mongol dominance was slow, union with Muscovy in the 15thcentury integrated the town into a larger political and economic structure. 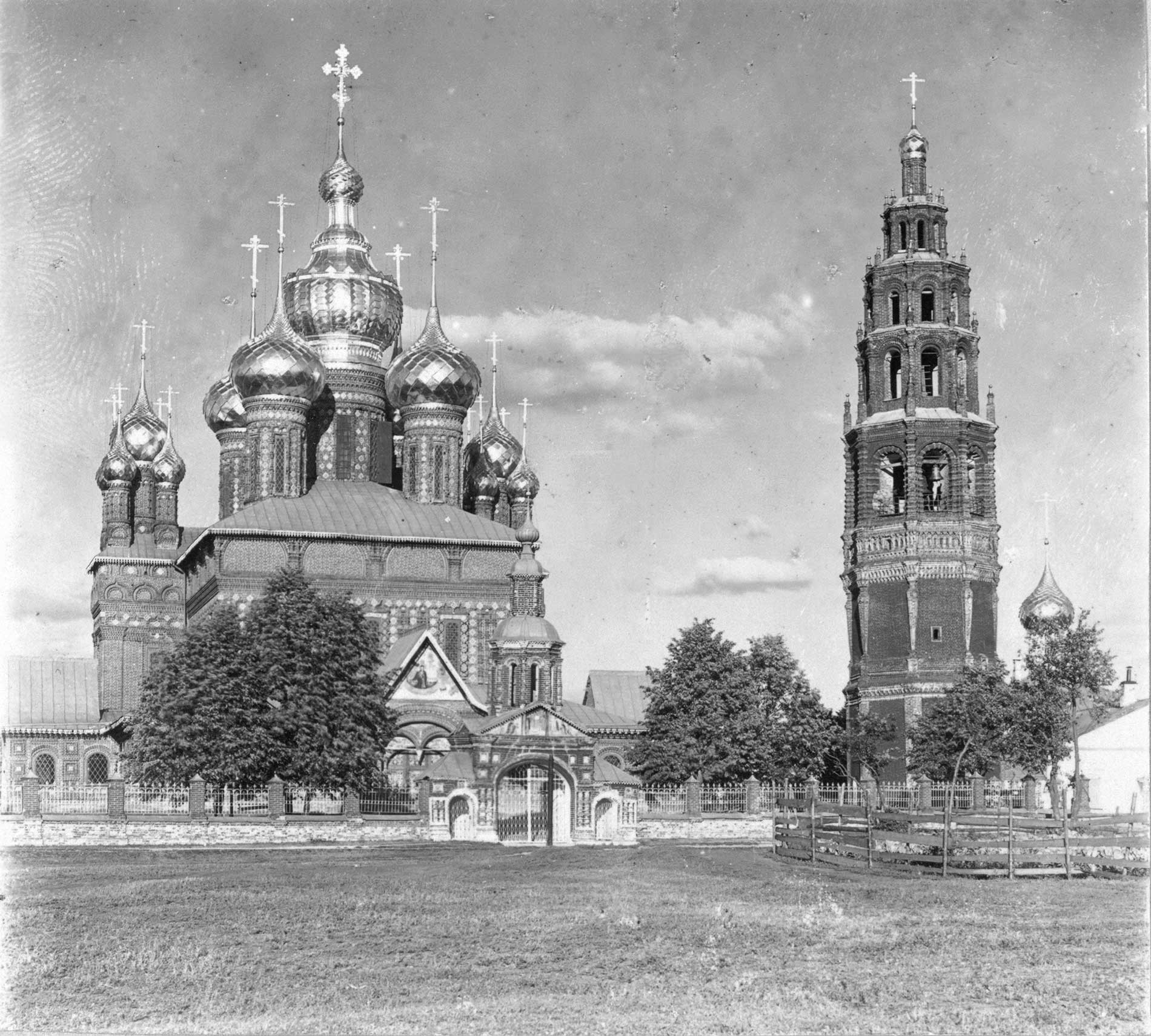 Yaroslavl benefited from its location, which enabled it to serve as a center not only for trade within the extensive Volga River but also for the Russian North. In the latter part of the 16th century, Ivan IV (the Terrible) established a port at the Archangel Monastery on the Northern Dvina River near the White Sea and thus opened Moscow for commerce with Western Europe. enhanced Yaroslavl’s strategic position within a mercantile network that stretched from the White Sea to Siberia. Thanks to these new trading possibilities, Yaroslavl attracted colonies of Russian and foreign merchants — English, and German. 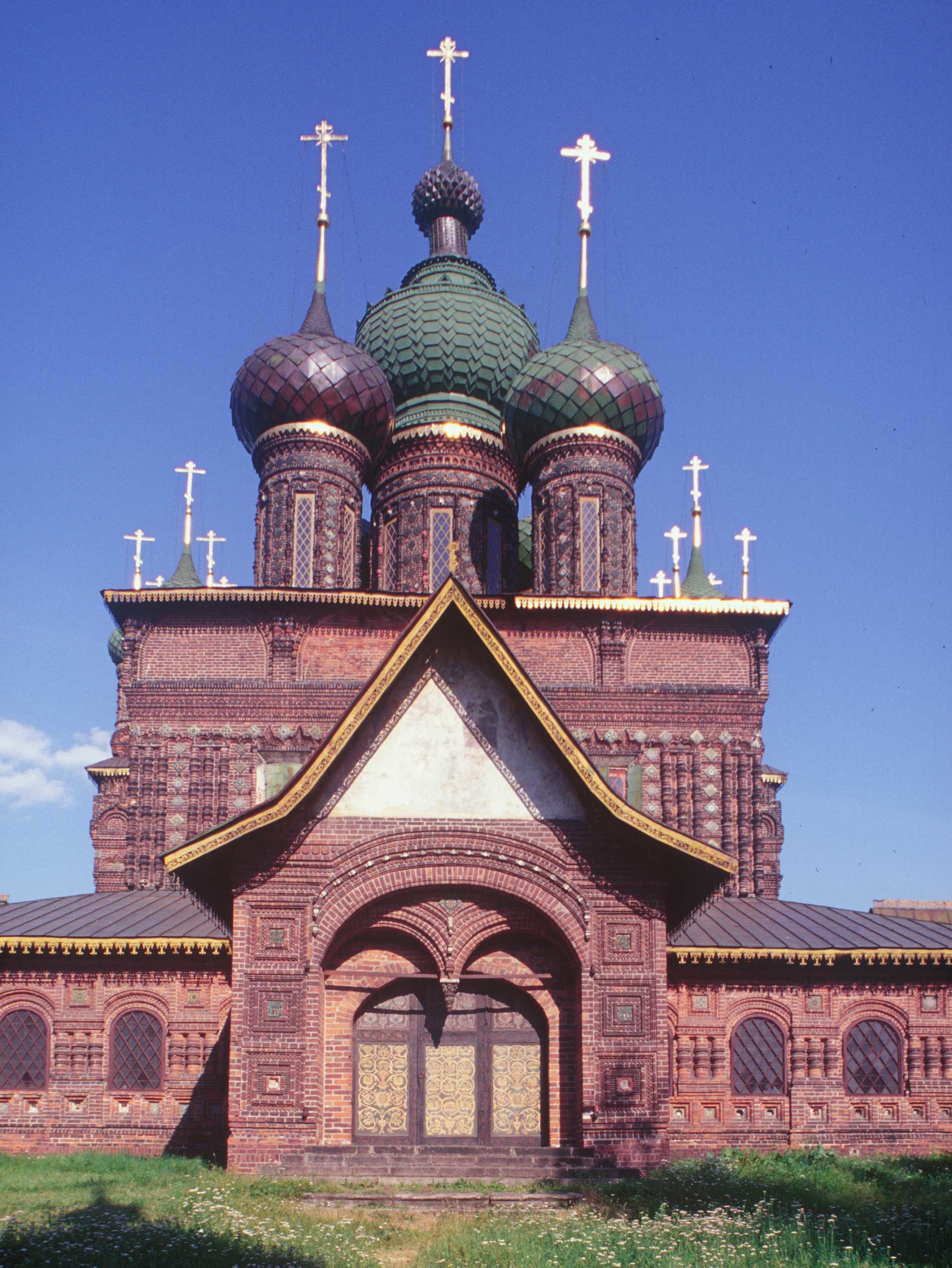 Commerce in Yaroslavl declined during the interregnum following the death of Boris Godunov in 1605. Known as the Time of Troubles, during this period, much of the country was devastated by political and social chaos. Yaroslavl eluded the worst of the cataclysm, and in 1612 the city served as a center for national forces against a Polish occupying force in Moscow.

The participation of Yaroslavl's leading merchants in this campaign brought them extensive trading privileges from the government of the new ruler, Mikhail Fyodorovich (1596-1645), first tsar of the Romanov dynasty. As a result, during the 17th century, the city not only accumulated the wealth necessary to build elaborately decorated churches but also established connections with cultural centers to the west. 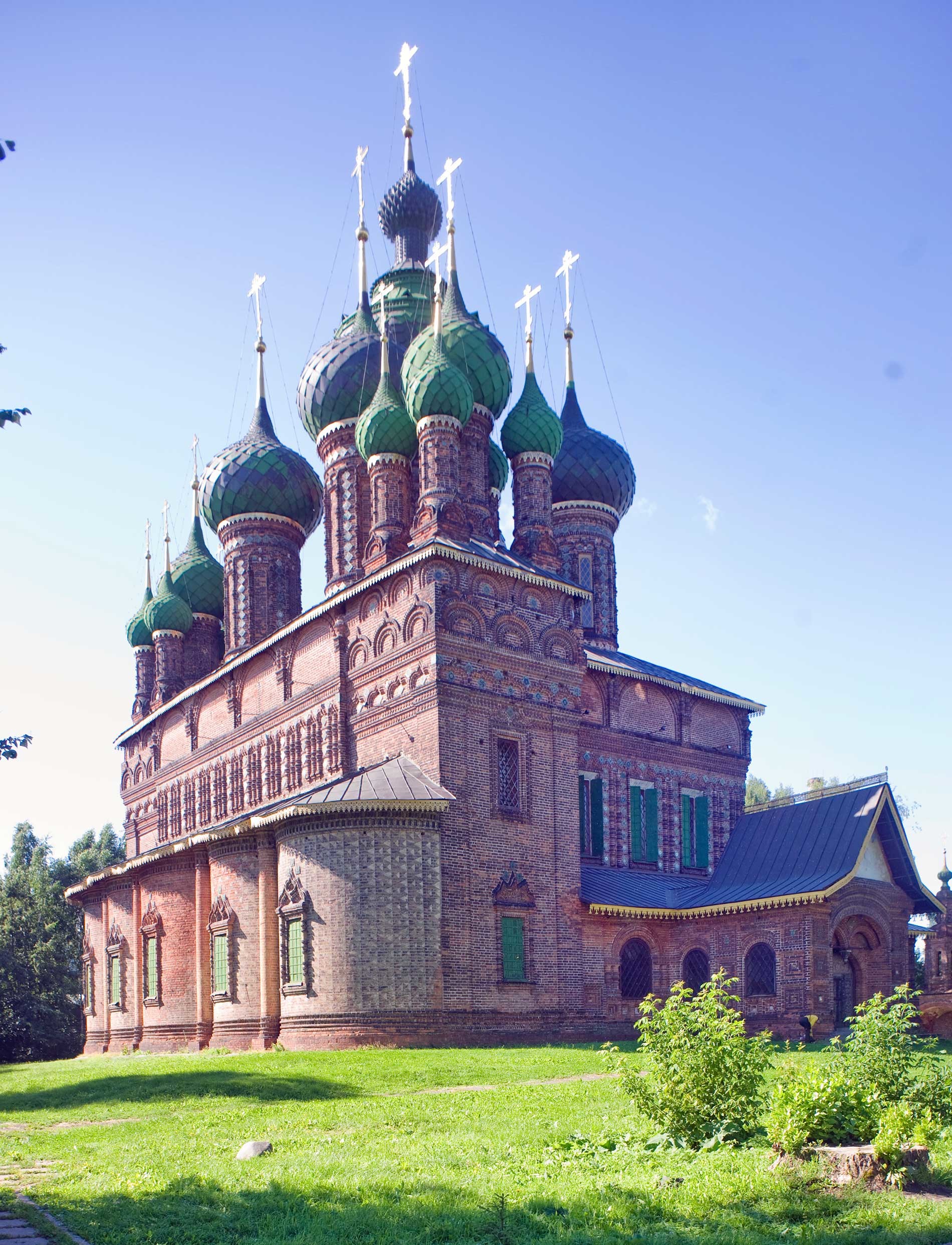 Church of Decapitation of John the Baptist. Northeast view. Aug. 15, 2017.

Only Moscow rivaled Yaroslavl in its concentration of new churches, sponsored by a combination of wealthy merchants, city districts, and trade associations. During the 17th century, the area’s 35 parishes witnessed the construction of 44 masonry churches, most erected after a fire that consumed much of the town in 1658. Despite damage inflicted during the Soviet era, many of these churches have survived.

The largest and most elaborate of these structures is the Church of the Decapitation of John the Baptist, located in the Tolchkovo district near the Kotorosl River, a small tributary of the Volga. Prokudin-Gorsky photographed this superb monument only from the west in light. Unfortunately, his original negative is lost, but the surviving print from his contact album gives a unique view of the entire church ensemble from an open field. That view was closed by the construction during the Soviet period of a large chemical plant next to the church. 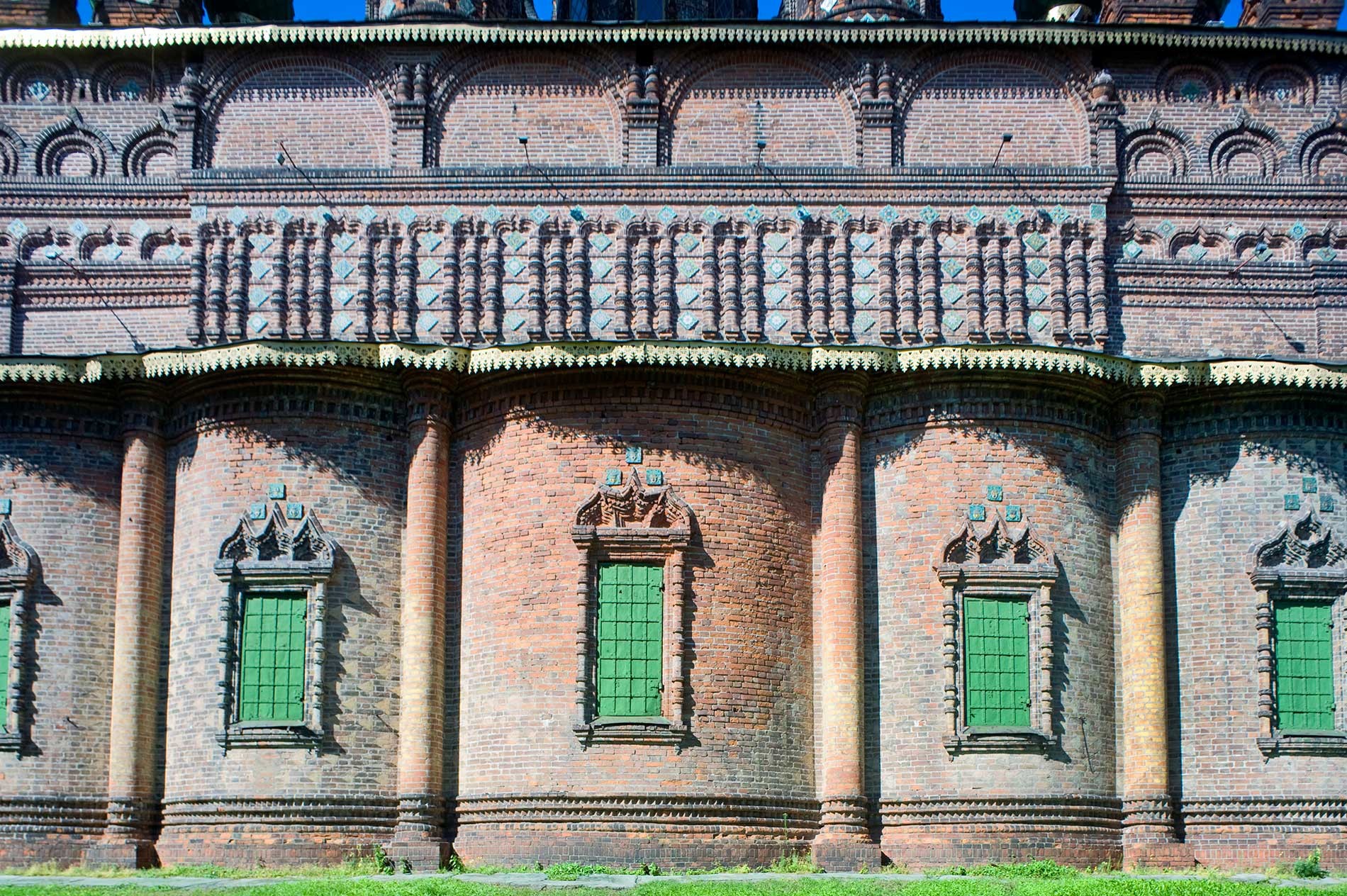 The Tolchkovo church was constructed between 1671 and 1687 with funds provided by and by the entrepreneurs Rodion and Leontii Eremin, whose wealth derived from leather workshops located in the district. The plan of the church included an enclosed gallery on three sides of the rectangular structure and two symmetrical chapels at each eastern corner. Entrance porches with steeply pitched roofs mark the center of the north, west and south galleries.

The brick facades are clusters of attached columns with a mélange of decorative elements such as miniature pointed arches over paired columns of molded patterned brick. The elaborate brick forms are enhanced by bright polychrome tiles visible in my detailed photographs. 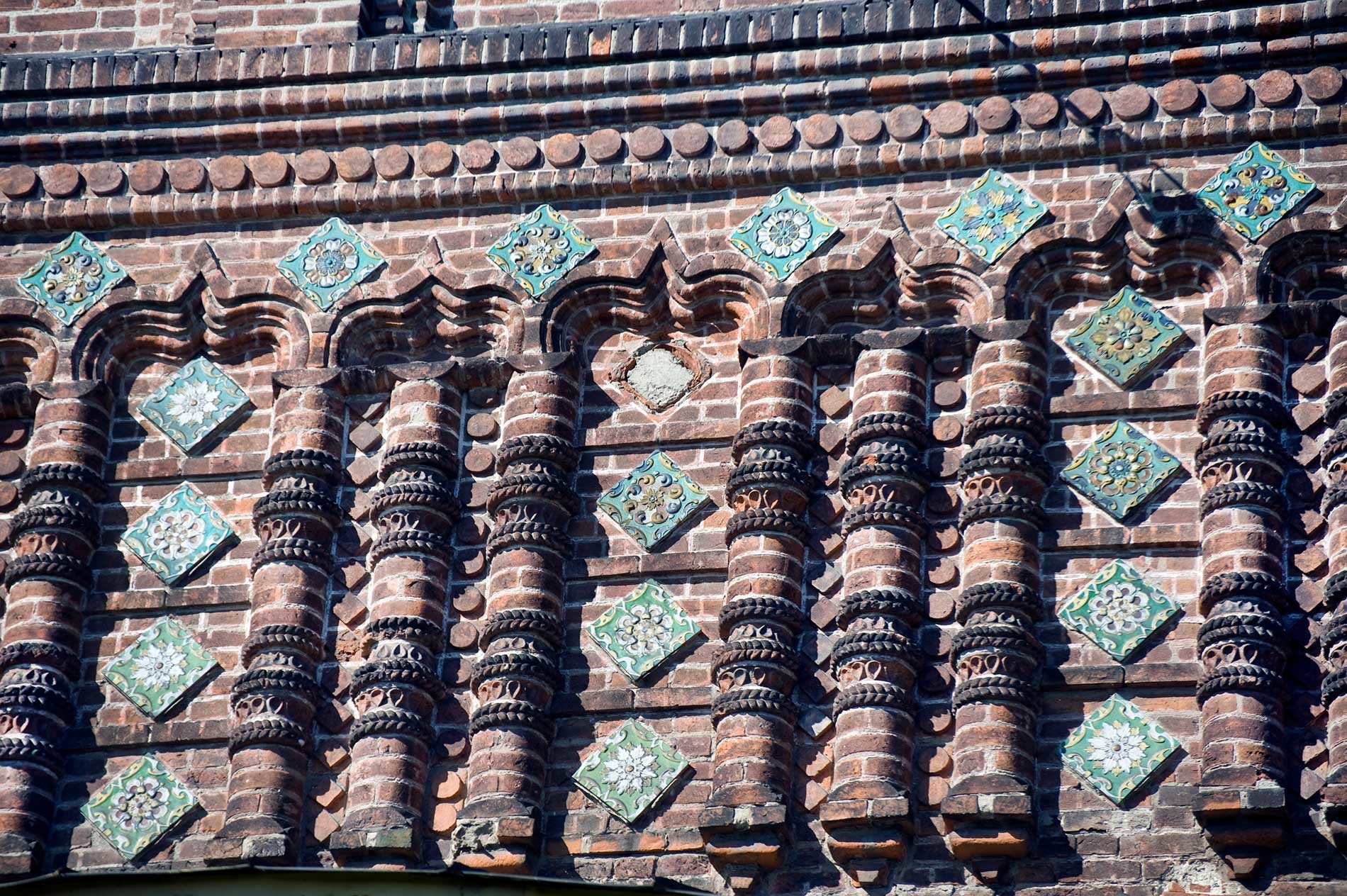 Great ingenuity was demonstrated by the anonymous master builders in the design of the two east chapels, which are dedicated to the Three Prelates (Sts. Basil the Great, Gregory the Theologian and John Chrysostom) and to the Kazan Miracle workers Sts. Gurii and Varsonofii. In an unusual solution, the chapel cornices are elevated to the height of the main structure.

The result is a uniform roof level that creates an impressive visual effect from the west. In Prokudin-Gorsky’s distant view, the relation of the chapels to the main structure is clear. But a closer view, shown in my photograph, hides the chapel structures and creates the illusion that the church is crowned with 15 brilliant cupolas. 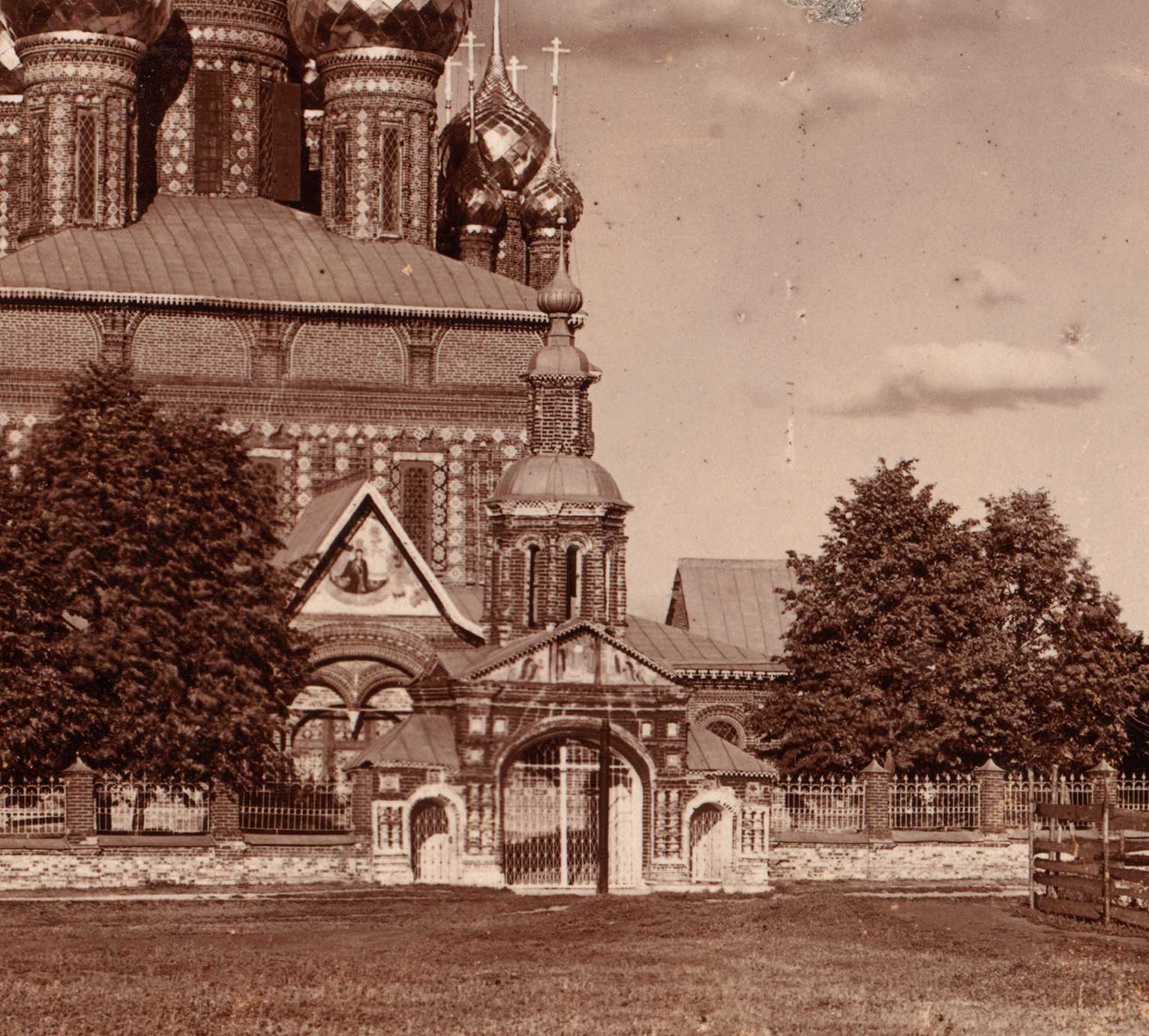 Church of Decapitation of John the Baptist, with Holy Gate. Summer 1910.

The chapel structures also create a monumental unity on the east facade, with accent points provided by each chapel's cluster of five miniature cupolas on elongated drums. The decorative relief work on the upper tiers of the east façade is complemented by colorful trompe l'oeil rustication on the lower apsidal structure, divided into five segments. My photographs over the years show that the painted pattern has faded, yet the east facade is no less impressive.

The Church of John the Baptist had ancillary structures, including a modest winter church dedicated to the Ascension, built in 1659-1665 and demolished by the factory in the early 1950s. The main approach to the church from the west was framed by a Holy Gate, which has survived at the factory boundary. 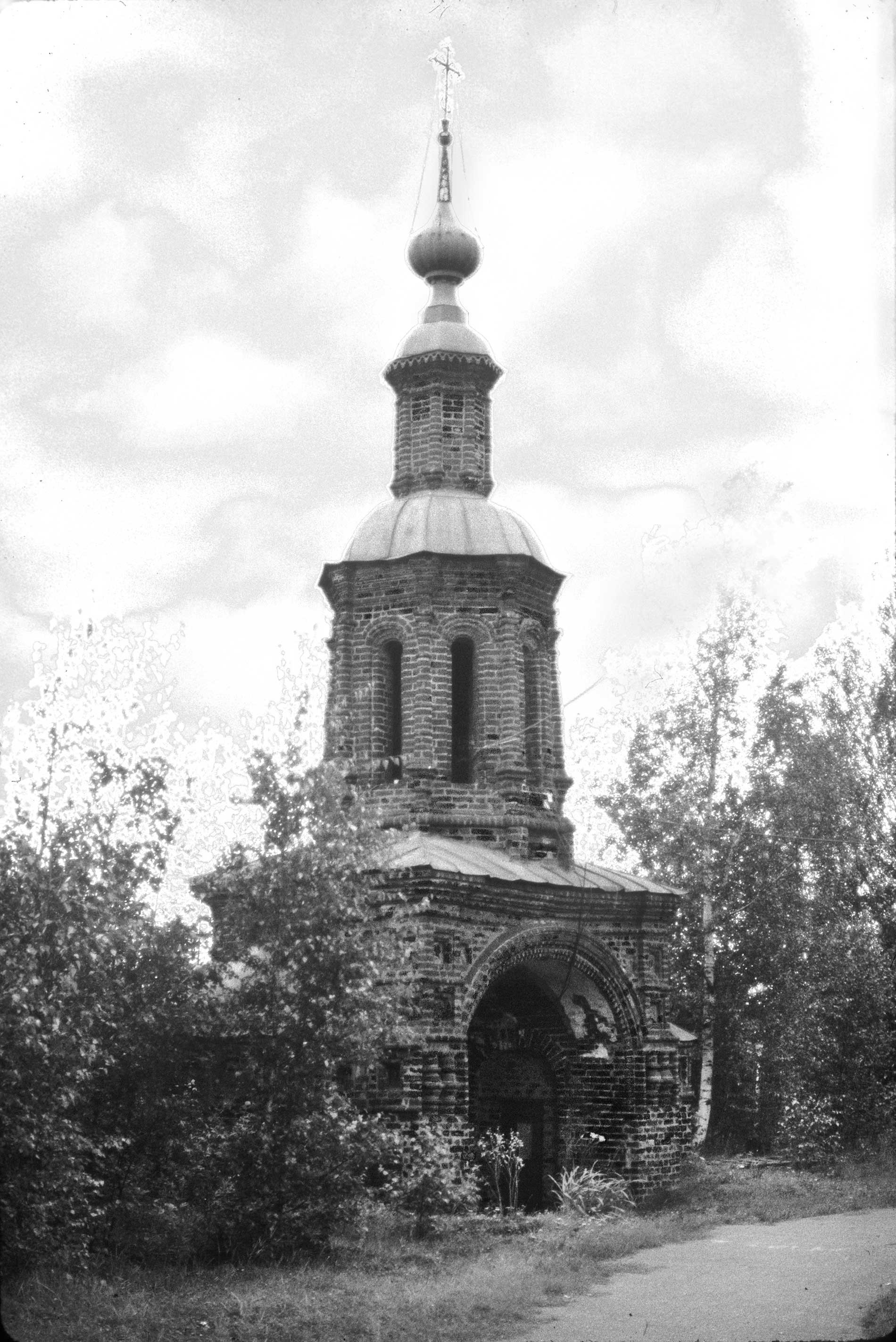 The dominant feature of the ensemble is the bell tower, built at the turn of the 18th century in the florid style known as "Moscow Baroque." This grand campanile, 150 feet in height, is decorated with limestone elements, including balusters and pinnacles that emphasize the ascending octagons — an amalgam of Russian and Dutch design.

In view of the turbulence of 20th-century Russian history, it is something of a miracle that the magnificent Tolchkovo ensemble has, for the most part, survived. As imposing as the Church of John the Baptist is on the exterior, its interior, covered with frescoes, is no less remarkable. Fortunately, we know the identities of the artists who created this space. Their work will be the subject of the following article in this series. 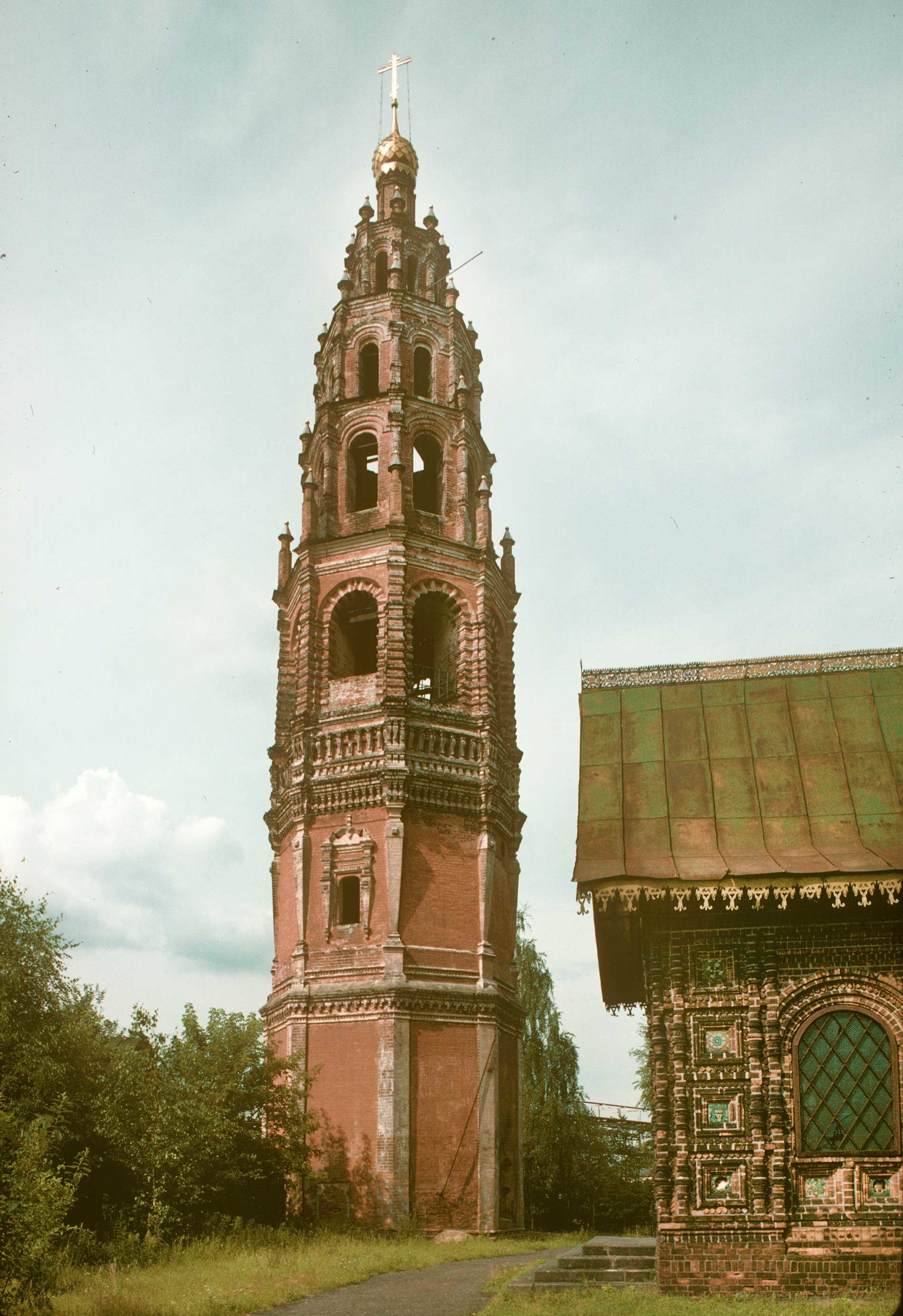