History in Carvings: The Cathedral of the Dormition in Vladimir

Travel
William Brumfield
One of the great masterpieces of medieval Rus’ survives to this day. 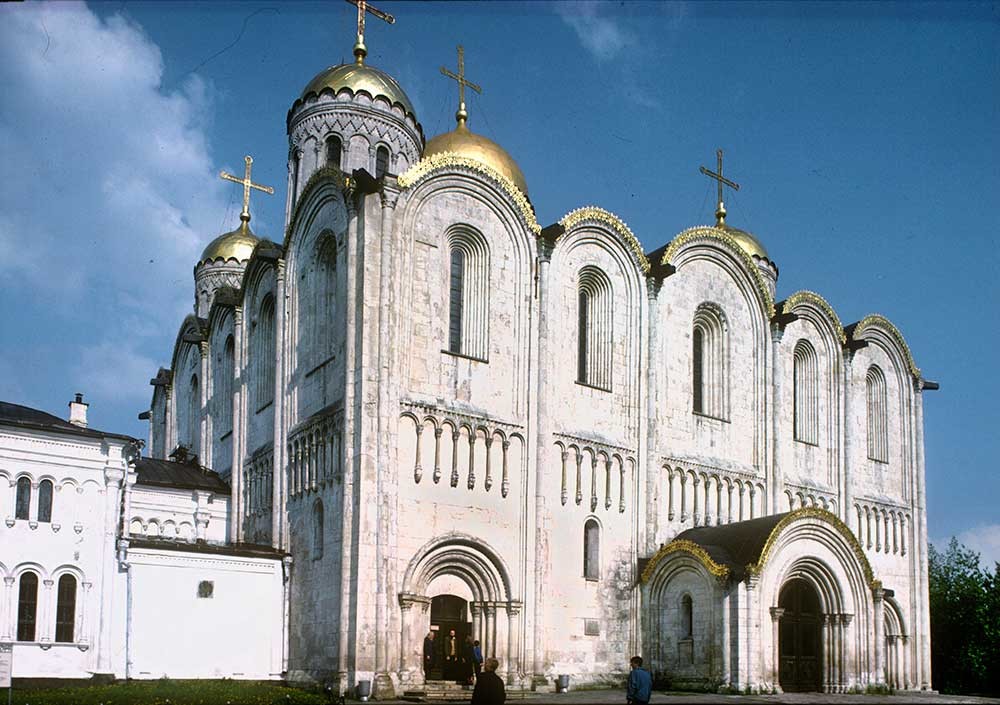 Vladimir. Cathedral of the Dormition of the Mother of God. Northwest view. May 16, 1995.

At the beginning of the 20th the Russian chemist and photographer Sergei Prokudin-Gorsky invented a complex process for vivid, detailed color photography (see box text below). His vision of photography as a form of education and enlightenment was demonstrated with special clarity through his photographs of medieval architecture in historic settlements northeast of Moscow, including Suzdal and Vladimir, which he visited in the summer of 1911. 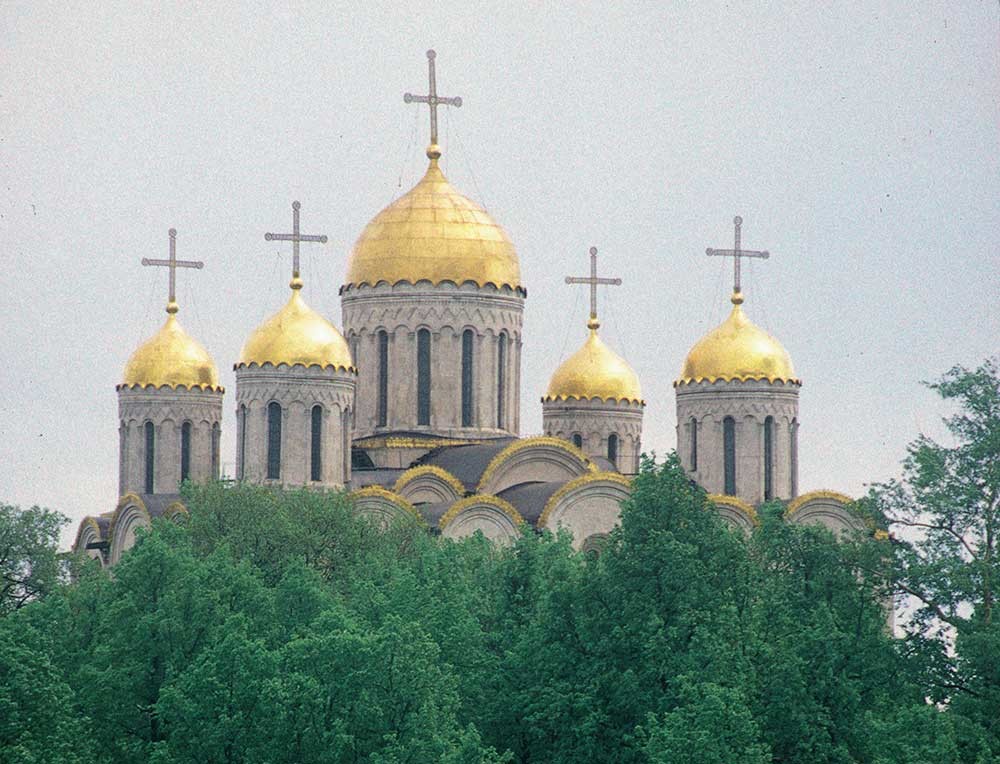 The fortress of Vladimir was established in 1108 on the Klyazma River by Vladimir Monomakh, who ruled as Grand Prince Kiev from 1113 to 1125. Under his guidance, Vladimir and the surrounding settlements became a center of political and economic power in the lands of the eastern Slavs. Under Monomakh’s descendants in the second half of the 12th century, the Vladimir area witnessed a surge in church construction with a form of limestone known as stone.

The most important of these temples was the Cathedral of the Dormition of the Mother of God (Assumption), begun in 1158 by Prince Andrei Bogoliubsky. The plan of the Dormition Cathedral conformed to the elongated plan with a dome in the center typical of large churches in Kiev and Novgorod during the same period. The stone facades displayed a few high-relief carvings.

The source of such skilled technical work remains unclear. The Laurentian chronicle mentions the bringing of masters from "all lands," and there are later references to Nemtsi, or "Germans"— a term broadly used for foreigners. It has been proposed that the artisans were sent to Bogoliubsky by Frederick Barbarossa. If certain features of the Vladimir churches — such as the portals and decorative stonework — suggest a Western Romanesque presence, the basic plan remained in the tradition of Byzantine church architecture as adapted in early medieval Rus. 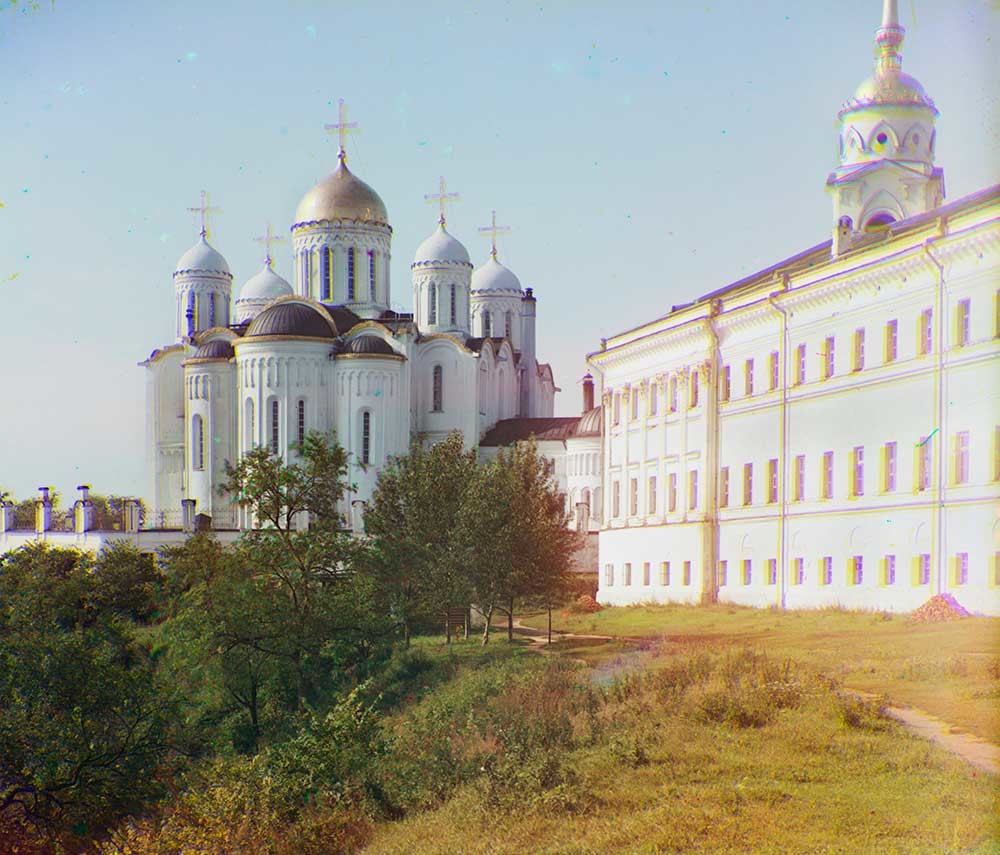 The Dormition Cathedral was soon rebuilt in a larger and more complex form during the reign of Andrei Bogoliubsky’s half-brother, Vsevolod III (Yurevich). The impetus for the expansion came from a fire in 1185 that destroyed much of Vladimir and severely damaged the Dormition Cathedral.

In rebuilding the cathedral (1185-90), Vsevolod's builders dismantled the attached but retained the walls of the original structure, weakened by fire, as the core of the new cathedral. was expanded by adding aisles to the north, west and south sides. The walls of the addition were raised two stories, but not to the full height of the original structure. Thus the relation between the old and the new was ingeniously defined in the rebuilt structure. 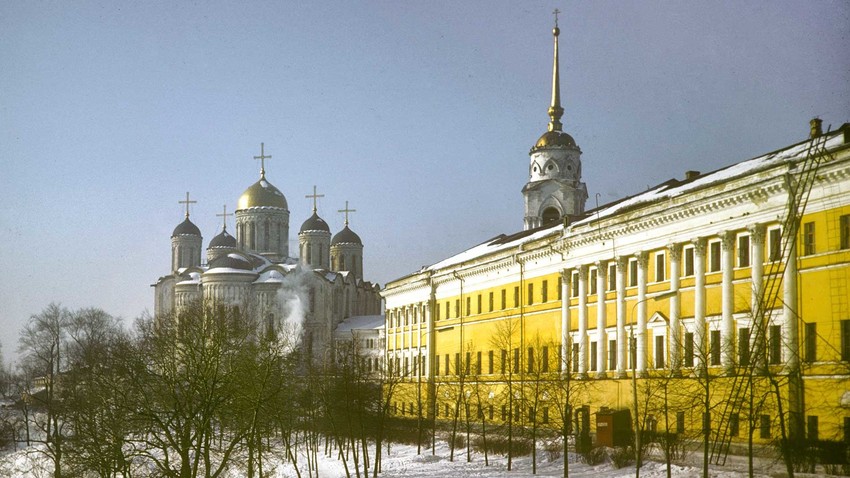 The cathedral was crowned by four secondary domes placed diagonally to the main dome. On the east, the three-part apse, visible in Prokudin-Gorsky’s color photograph, was rebuilt with an increase in depth.

The new facades were marked at mid-level by an arcade frieze with accents of carved ornamentation. Some of the decorative stonework on the north and south walls was transferred from the original cathedral. The new Dormition Cathedral provided a model for the revival of architecture in Muscovy at the end of the 15th century, exemplified by the Dormition Cathedral () at the center of the Moscow Kremlin.

Less than a after the completion of the Dormition Cathedral, the Vladimir principality was overwhelmed by the Mongol invasion of Rus. In late February 1238, the city was captured and sacked with great loss of life. The grand prince at that time, Vsevolod’s son Yury, was killed a few days later in a final battle with the Mongol armies. When Yury’s wife, Agafya, along with other members of the family, took refuge in the cathedral, the Mongols placed burning timber against the thick walls, and were asphyxiated. 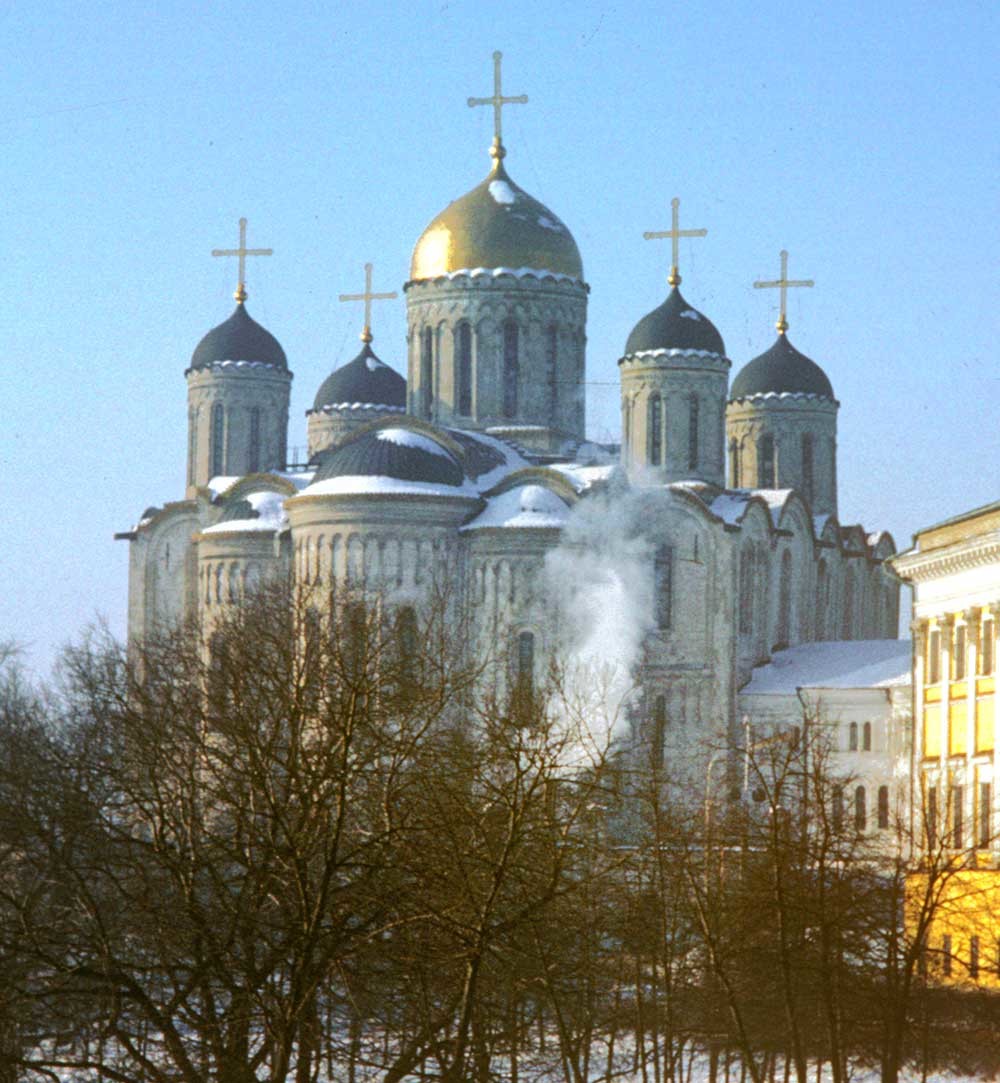 Despite these cataclysmic events, the Dormition Cathedral survived. Vladimir was sacked again by a large Mongol raid in 1408, during which the cathedral was ransacked and damaged. Two renowned painters, Andrei Rublev and Daniil Chorny, were brought to redo the interior. Rublev’s surviving frescoes are located in the western part of the cathedral and depict the Last Judgement. The two also painted icons for a new icon screen. Although the icon screen was redone in the Baroque style in the late 18th century, some of the Rublev icons were preserved and are now in the collection of Moscow’s Tretyakov Gallery. 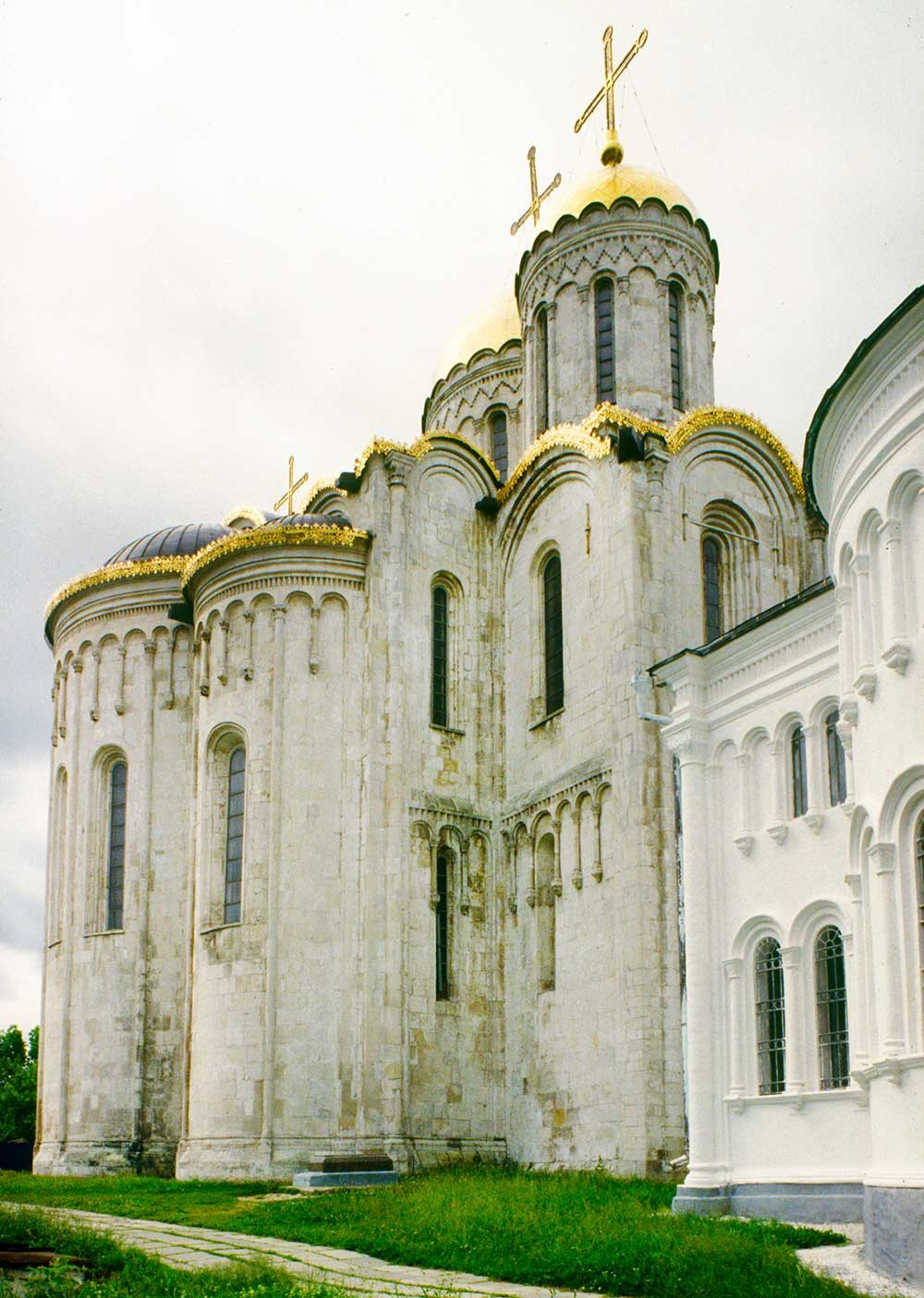 In 1785-90 the area along a bluff to the east of the Dormition was given to the construction of the Regional Administration Offices, visible in Prokudin-Gorsky’s photograph (on the right) and in mine taken six decades later. Designed in the neoclassical style favored during the reign of Catherine the Great, the long 3-story building has been criticized as a dissonant element situated between the medieval Cathedral of the Dormition and Vsevolod’s palace church, dedicated to St. Demetrius. Nonetheless, the solidly-built structure has endured and continues to serve the town.

During a visit to Vladimir in 1767, Catherine was taken by the Dormition Cathedral and personally supported its renovation, including the creation of the lavish icon screen mentioned above. Although well-intentioned, changes effected in this and subsequent decades had an impact on the cathedral’s appearance. 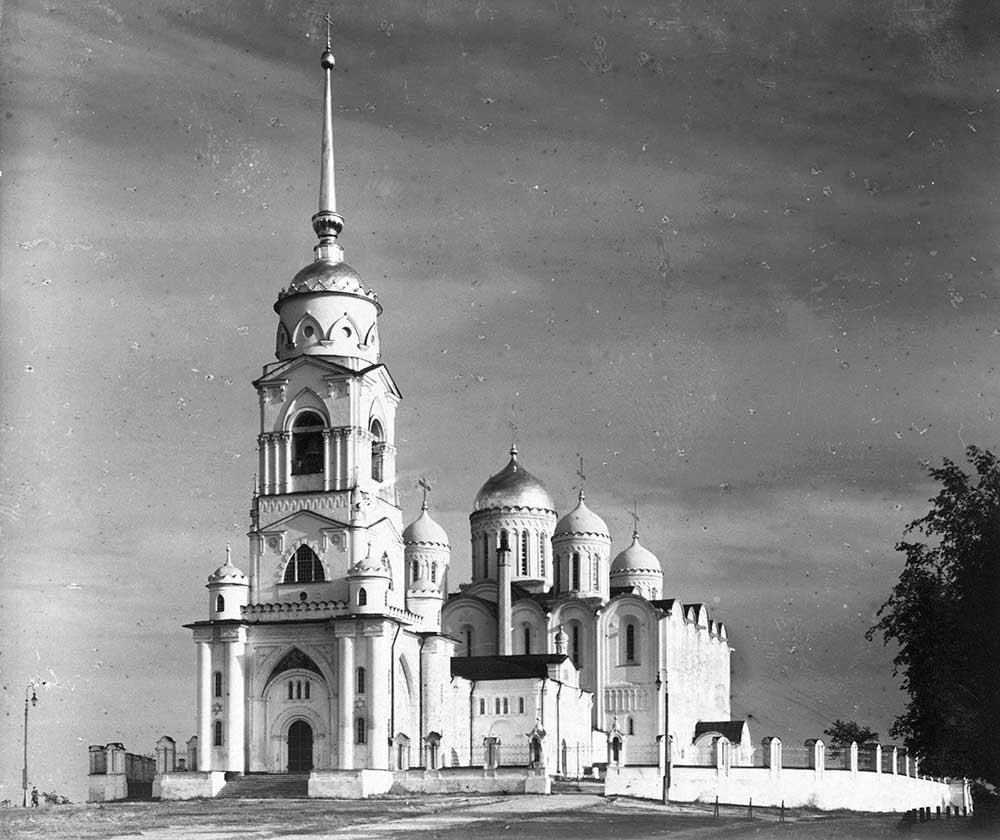 In 1810, a large bell tower was erected just to the north, and in 1862 a church dedicated to St. George was designed by Nicholas Artleben in a Gothic Revival style to fill the space between the bell tower and cathedral’s north façade. These additions created a new perspective on the ensemble from the north, facing the town’s main street (Moscow Street). This north perspective is clearly rendered in Prokudin-Gorsky’s contact print. The original negative is lost. 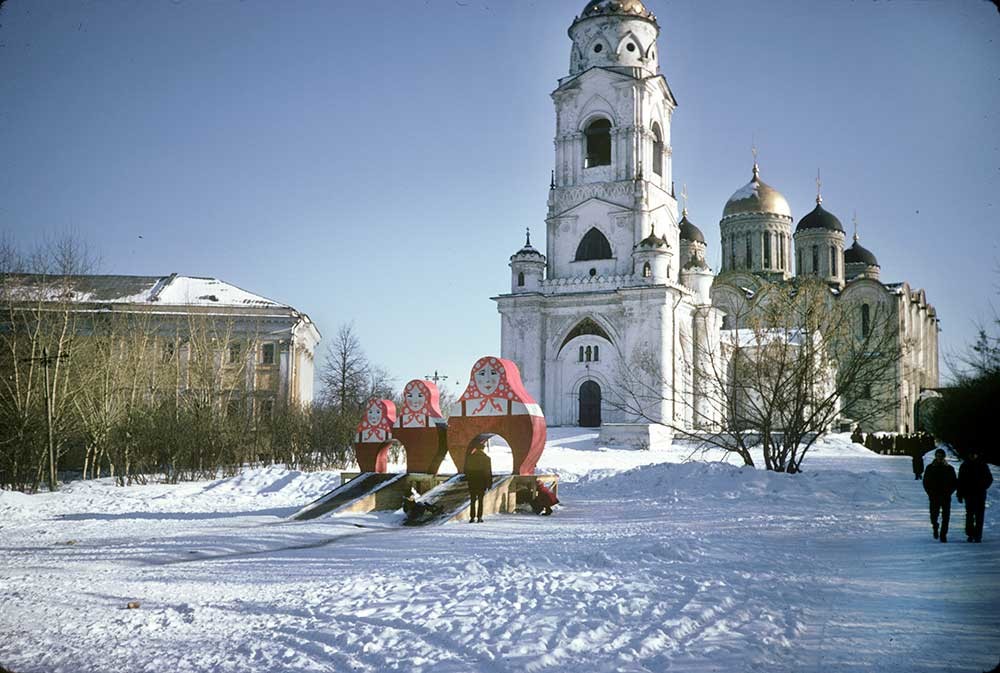 Comprehensive, informed restoration work in the 1880s eliminated most of the distortions made during the preceding century and uncovered a major section of Andrei Rublev’s frescoes. Another prolonged restoration phase concluded in the early 1980s. 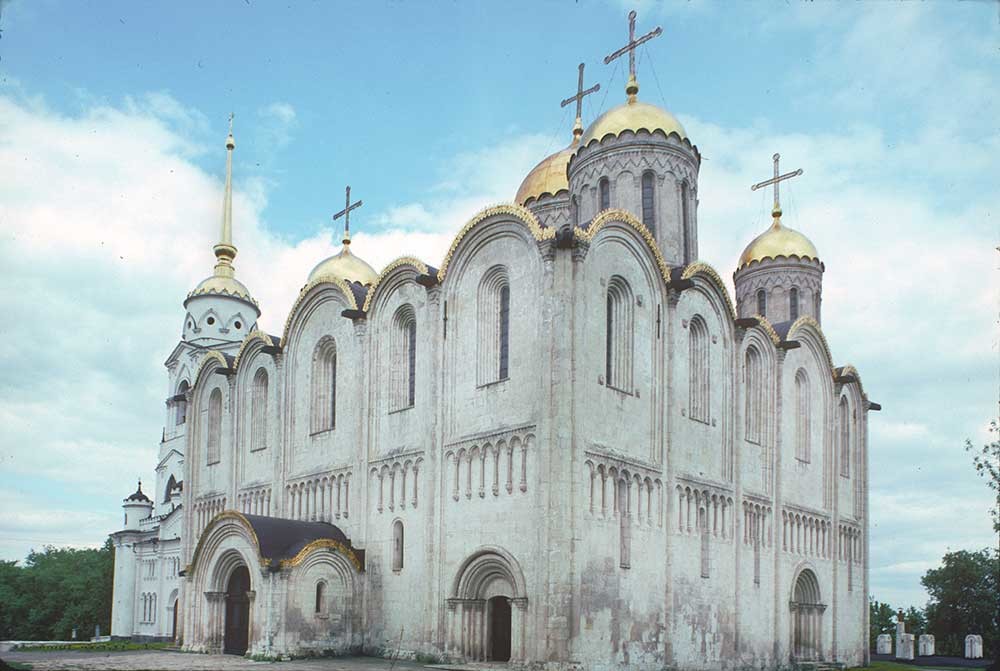 In 1992, the Dormition Cathedral was included in the UNESCO World Heritage List. Responsibility for this grand cultural and historical monument is now shared between the Vladimir-Suzdal and the Diocese of Vladimir, for which it serves as the main cathedral. 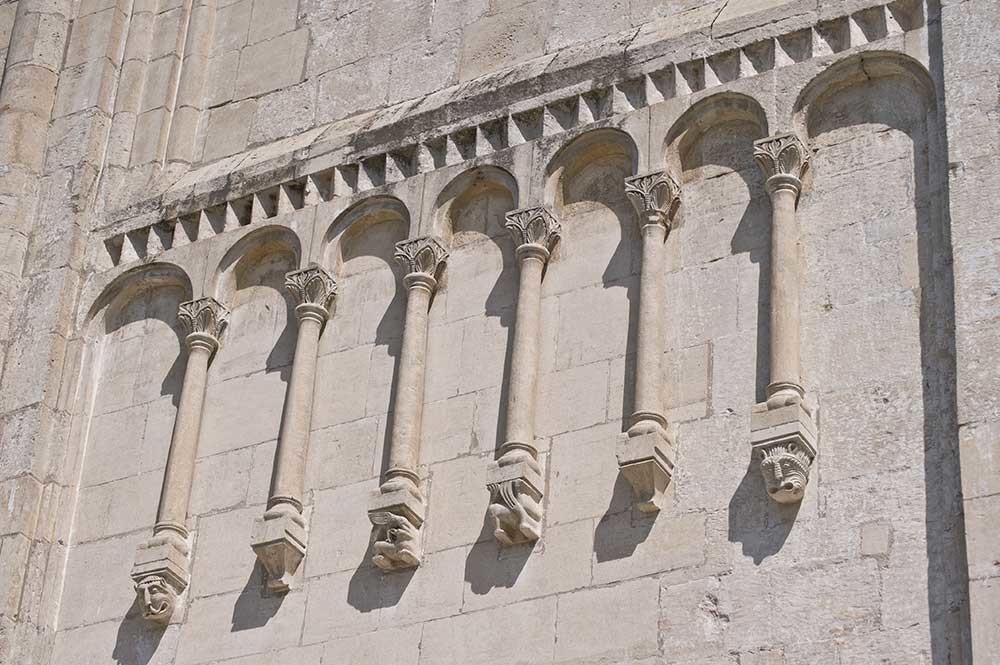 In the early 20th century the Russian photographer Sergei Prokudin-Gorsky invented a complex process for color photography. Between 1903 and 1916 he traveled through the Russian Empire and took over 2,000 photographs the new process, which involved three exposures on a glass plate. In August 1918 he left Russia with a large part of his collection of glass negatives and ultimately resettled in France. After his death in Paris in 1944, his heirs sold his collection to the Library of Congress. In the early 21st century the Library digitized the Prokudin-Gorsky Collection and made it freely available to the global public. Numerous Russian websites now have versions of the collection. In 1986 the architectural historian and photographer William Brumfield organized the first exhibit of Prokudin-Gorsky photographs at the Library of Congress. Over a period of work in Russia beginning in 1970, Brumfield has photographed most of the sites visited by Prokudin-Gorsky. This series of articles will juxtapose Prokudin-Gorsky’s views of architectural monuments with photographs taken by Brumfield decades later.