Travel
William Brumfield
How the Church of Tsarevich Dmitry and the Prince Chambers have changed throughout the centuries. 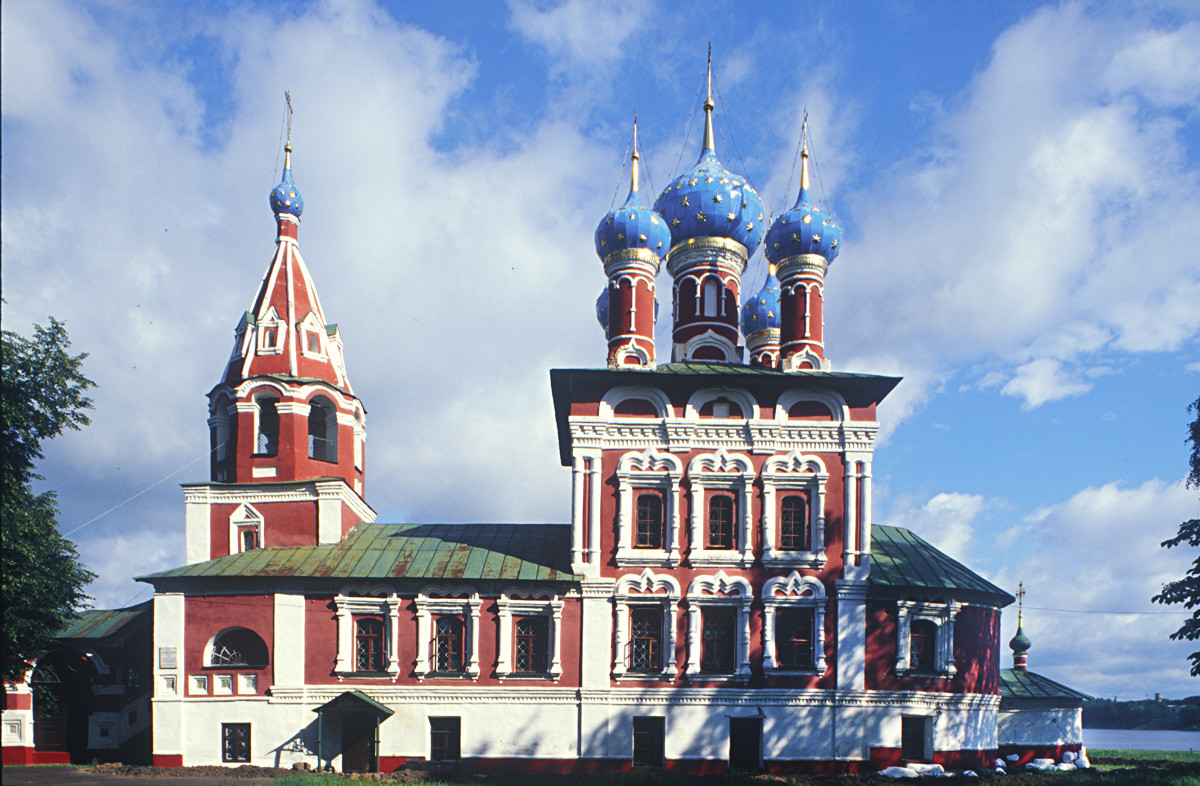 At the beginning of the 20th the Russian chemist and photographer Sergei Prokudin-Gorsky devised a complex process for vivid, detailed color photography. His vision of photography as a form of education and enlightenment was demonstrated with special clarity through his photographs of architectural monuments in the historic sites throughout the Russian heartland.

Logistical support for Prokudin-Gorsky’s project came from the Ministry of Transportation, which facilitated his photography on Russia’s waterways and expanding rail network. His trips along the Volga River in 1910 and 1911 proved especially productive 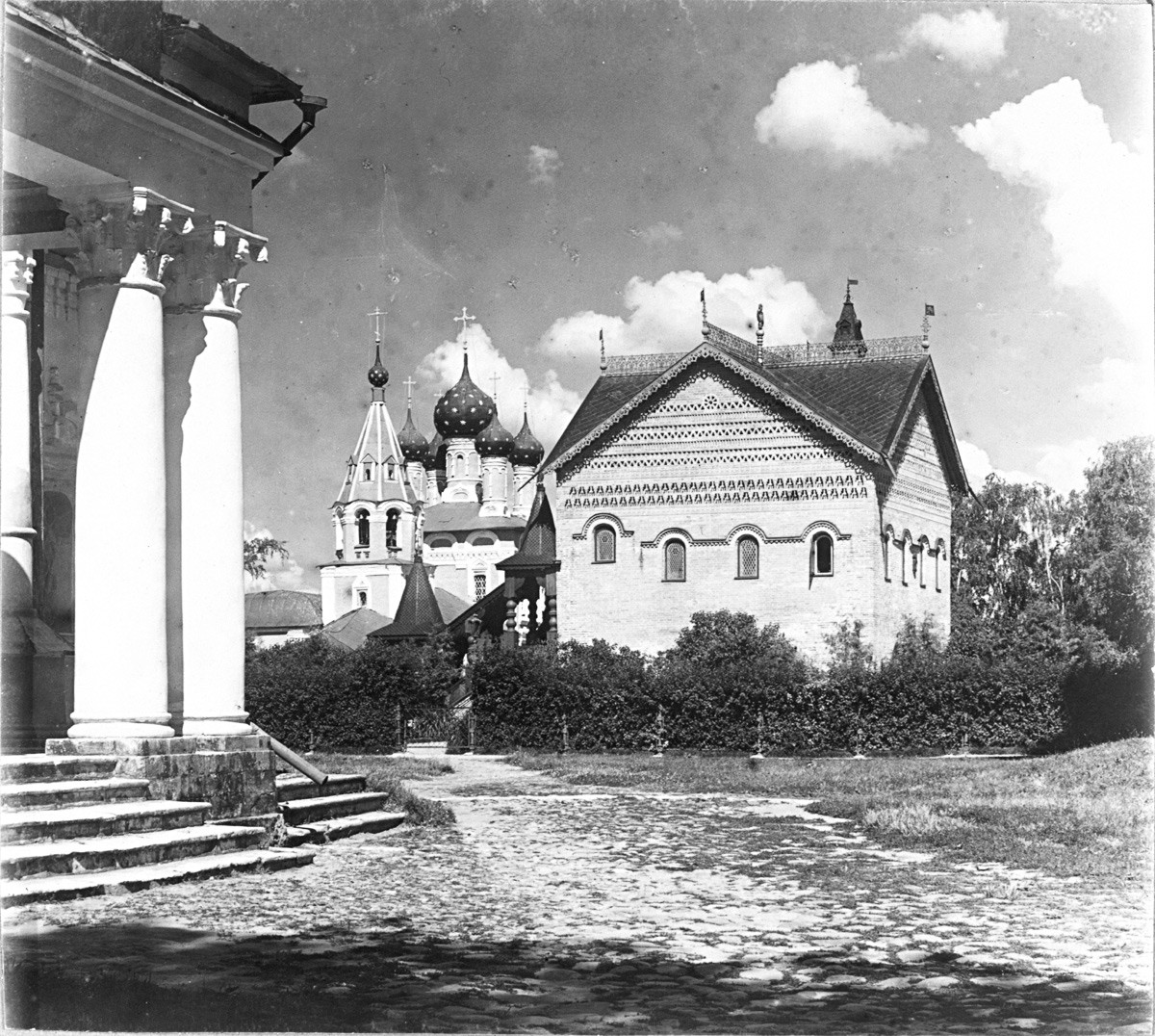 the late summer of 1910, Prokudin-Gorsky traveled on the Volga from Uglich to Gorodets. His visit to Uglich provided a bounty of photographs, but, unfortunately, his collection at the Library of Congress contains none of the original glass plates from Uglich. Their fate is unknown, and they were most likely broken during the tumult of the collection’s pre-World War II history.

However, Prokudin-Gorsky made contact prints from the magenta segment of his 3-exposure glass negatives, and the Uglich monochrome prints proved to be of excellent quality. My own visits to the town occurred over a two-decade span from 1987 to 2007 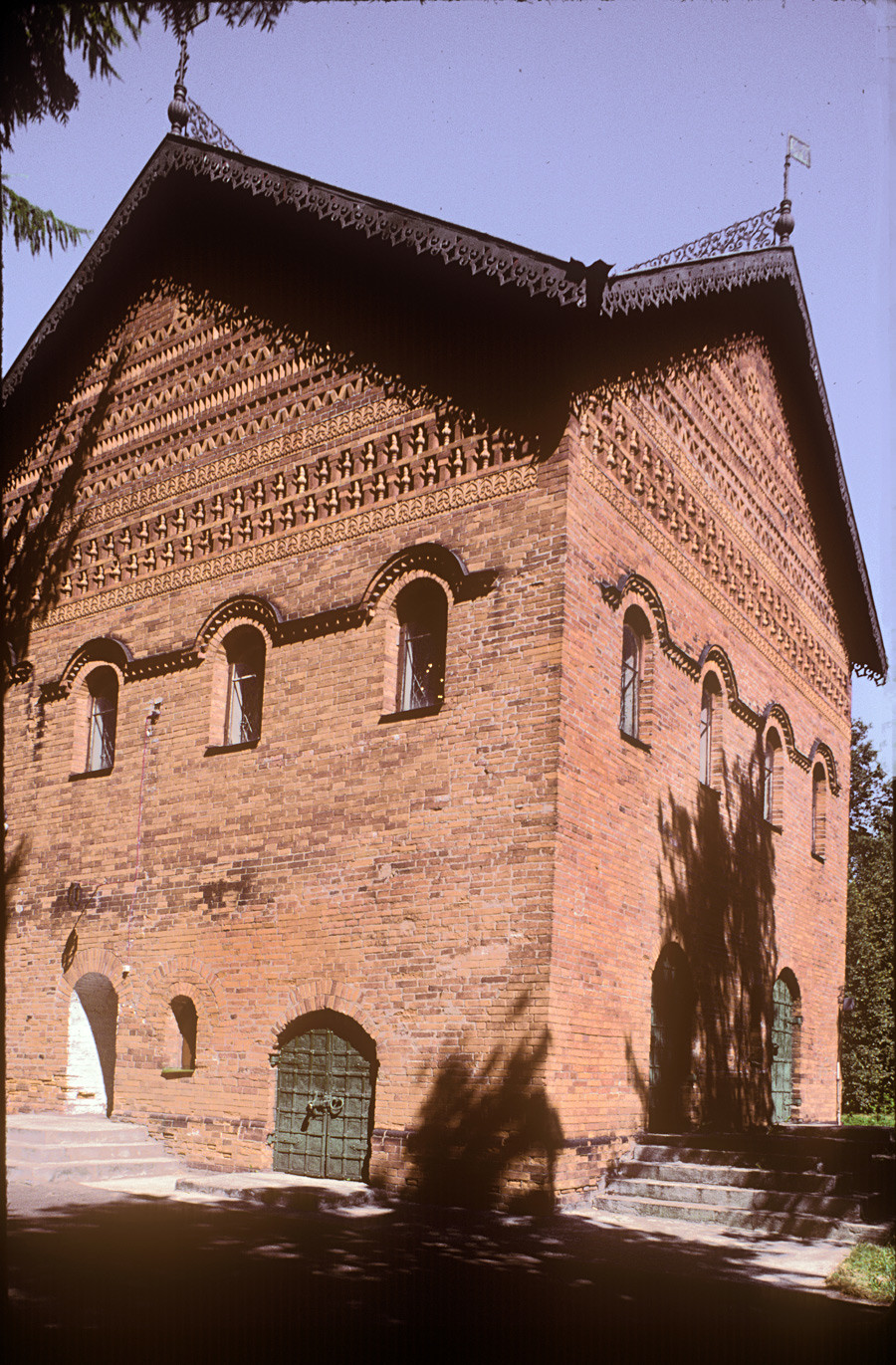 all the provincial towns photographed by Prokudin-Gorsky in the upper Volga basin, perhaps none possesses a more dramatic reputation than Uglich, located 200 km northeast of Moscow. It was here that Ivan the Terrible's eight‑year‑old son Dmitry met a violent death in May of 1591, an event that would ultimately play a role in plunging Russia into years of destructive chaos.

An ancient, but modest town

There is no verifiable date for the founding of Uglich, but archeological evidence suggests that it existed by the middle of the tenth century. Its location at a bend in the Volga is considered to have provided the name, derived from the Russian ugol, or angle 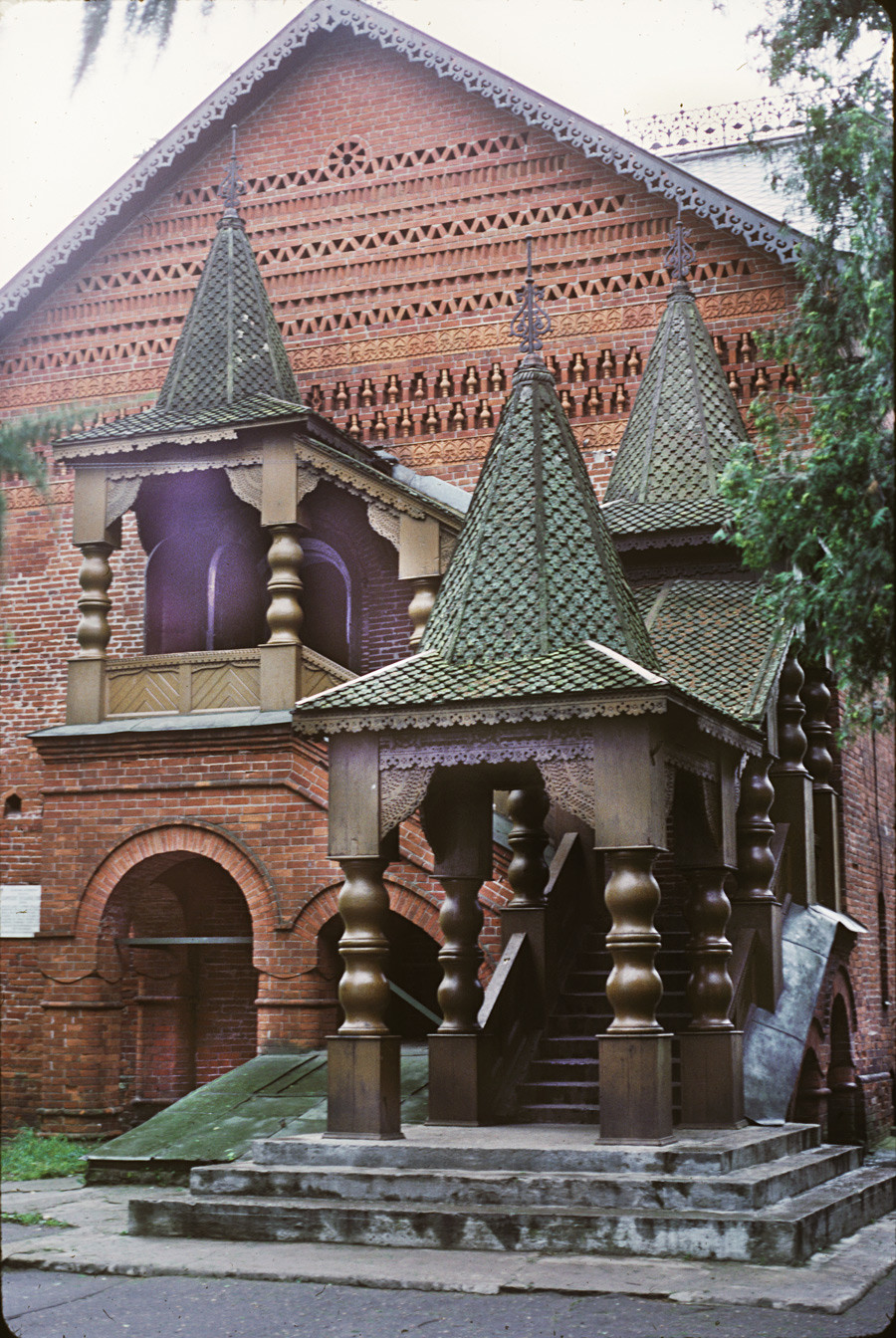 1216 until 1605 Uglich was the center of a minor feudal principality. Indeed, it was the last such principality to be absorbed into the Muscovite state. It is also the only principality to have preserved at least remnants of the princely palace, located within the small fortress, or kremlin.

A modest structure by European standards, the brick palace ( in Russian) was originally built in the 1480s for Prince Andrey the Large, younger brother of Moscovy’s Grand Prince Ivan III (the Great), Archeological evidence suggests that it was a long one-story building elevated over a low ground floor. The death of Tsarevich Dmitry — who was also Prince of Uglich — occurred just to the north of the palace 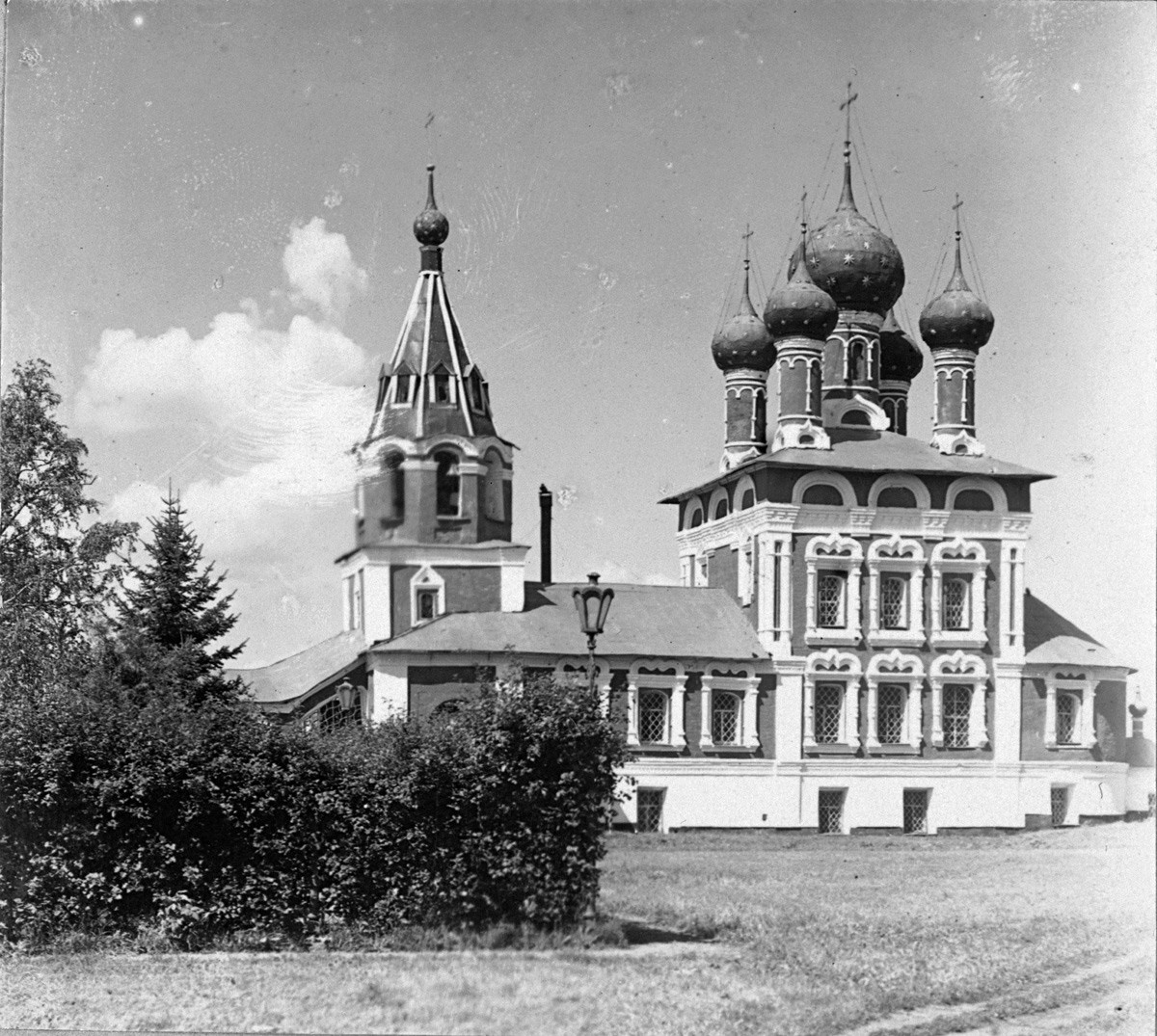 of the palace was razed at the turn of the 18th century to provide brick for the construction of the neighboring Transfiguration Cathedral. Only the adjoining structure containing the throne chamber survived, albeit in a state of disrepair. Repairs at the beginning of the 19th century led to the loss by overpainting of earlier rare fresco scenes from the Book of Proverbs.

As the tercentenary of the death of Tsarevich Dmitry approached in 1891, funds were allocated to undertake a major renovation directed by the Petersburg architect Nikolay Sultanov, a leading proponent of the late 19th-century Russian Revival style. Sultanov imaginatively added embellishments such as the decorative porch and entrance on the north side. Prokudin-Gorsky’s view shows the west side, with the porch only dimly visible. I was able to photograph the structure from both sides 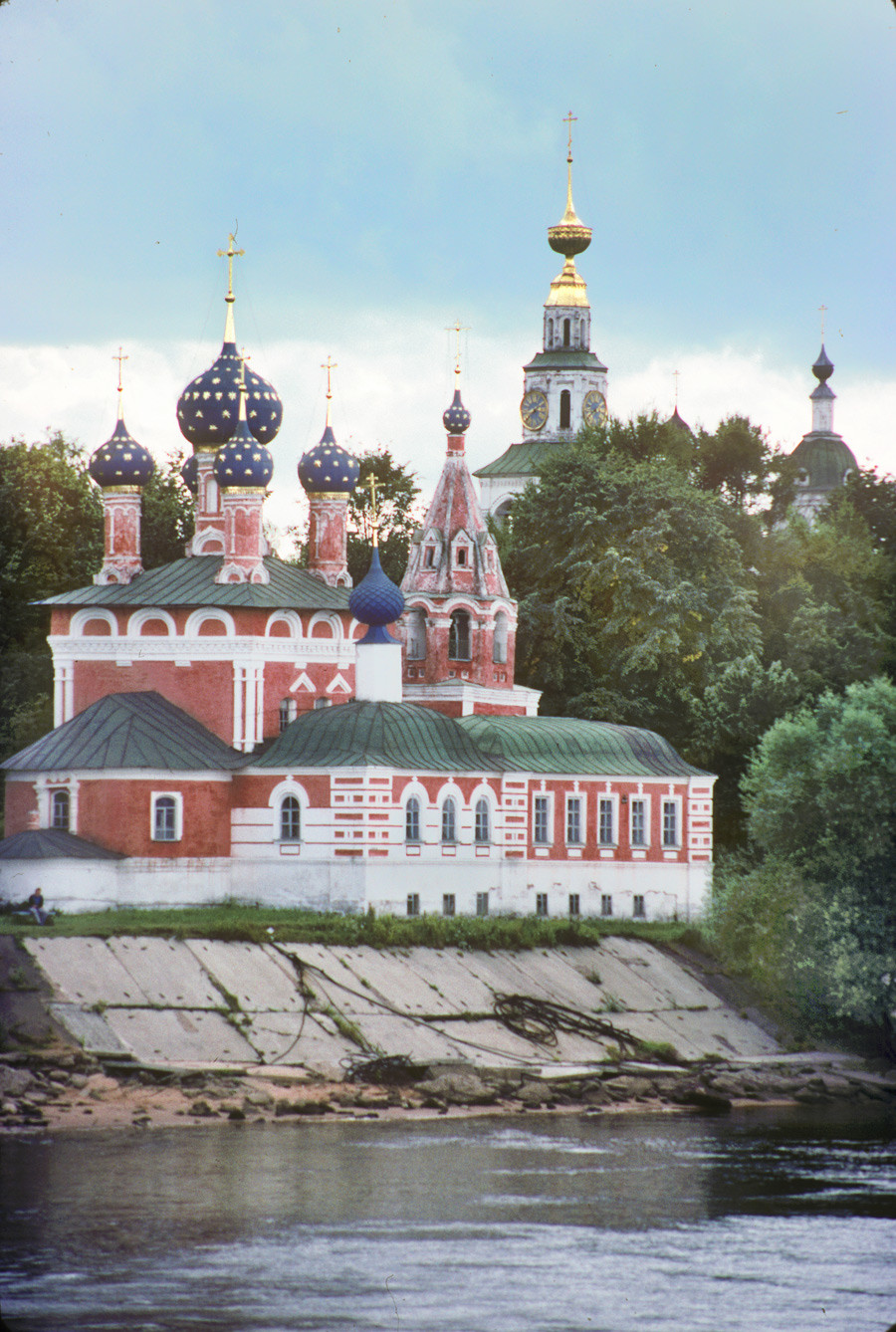 was near the palace that Tsarevich Dmitry—Ivan the Terrible's son by his non-canonical marriage to Maria Nagaya - met his demise. The circumstances of his death remain unclear, but a commonly -accepted version has it that the fatal knife wound was associated with an epileptic fit during a game that involved throwing knives.

Another version says that the child was murdered by companions, who were killed by an enraged crowd when they saw his body. This, in turn, gave rise to a popular and enduring legend that considered the tragedy a murder instigated by the cunning Boris Godunov (1551?-1605), who held de facto power in Russia during the final years of the reign of Tsar Feodor (1557-98), the last of the Ryurikovich dynasty. An investigative committee reported that the death was an “accident”; but following the accession of the Romanovs, the death was attributed to Godunov. In the 19th century, certain prominent historians began to question the “anti-Godunov” version 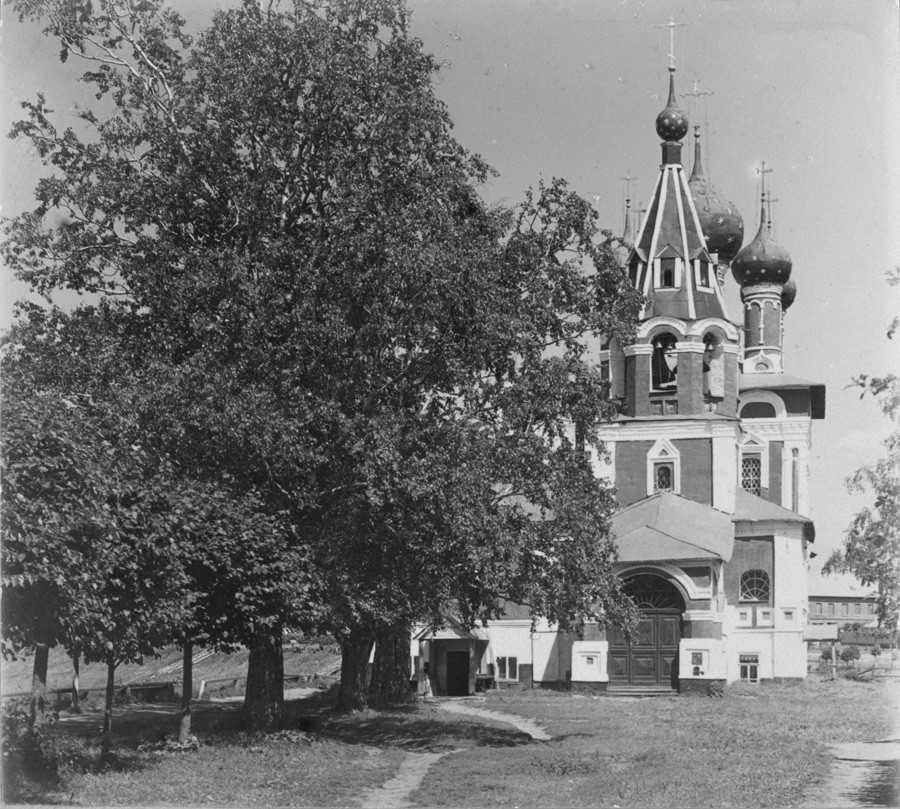 Godunov's formal accession to the throne in 1598 gave cause to hope that policies of this vigorous and intelligent ruler would work to the benefit of Russia, as they had during his regency. Yet he was driven by ambition and known for ruthless behavior toward perceived rivals, such as members of the Romanov clan (related to Ivan’s beloved first wife, Anastasia Romanovna).

Rumors of Godunov’s guilt in the murder of the Tsarevich Dmitry undermined his authority, as did political intrigues and a series of natural disasters that led to the recurring threat of famine. Following his death in 1605 and the murder of his family in the Kremlin, there a period of social chaos and incessant fighting known as the Time of Troubles. Only with the accession to power in 1613 of Michael, first of the Romanov tsars, was a modicum of order restored to a devastated Muscovite state, although several more years of fighting and disorder remained 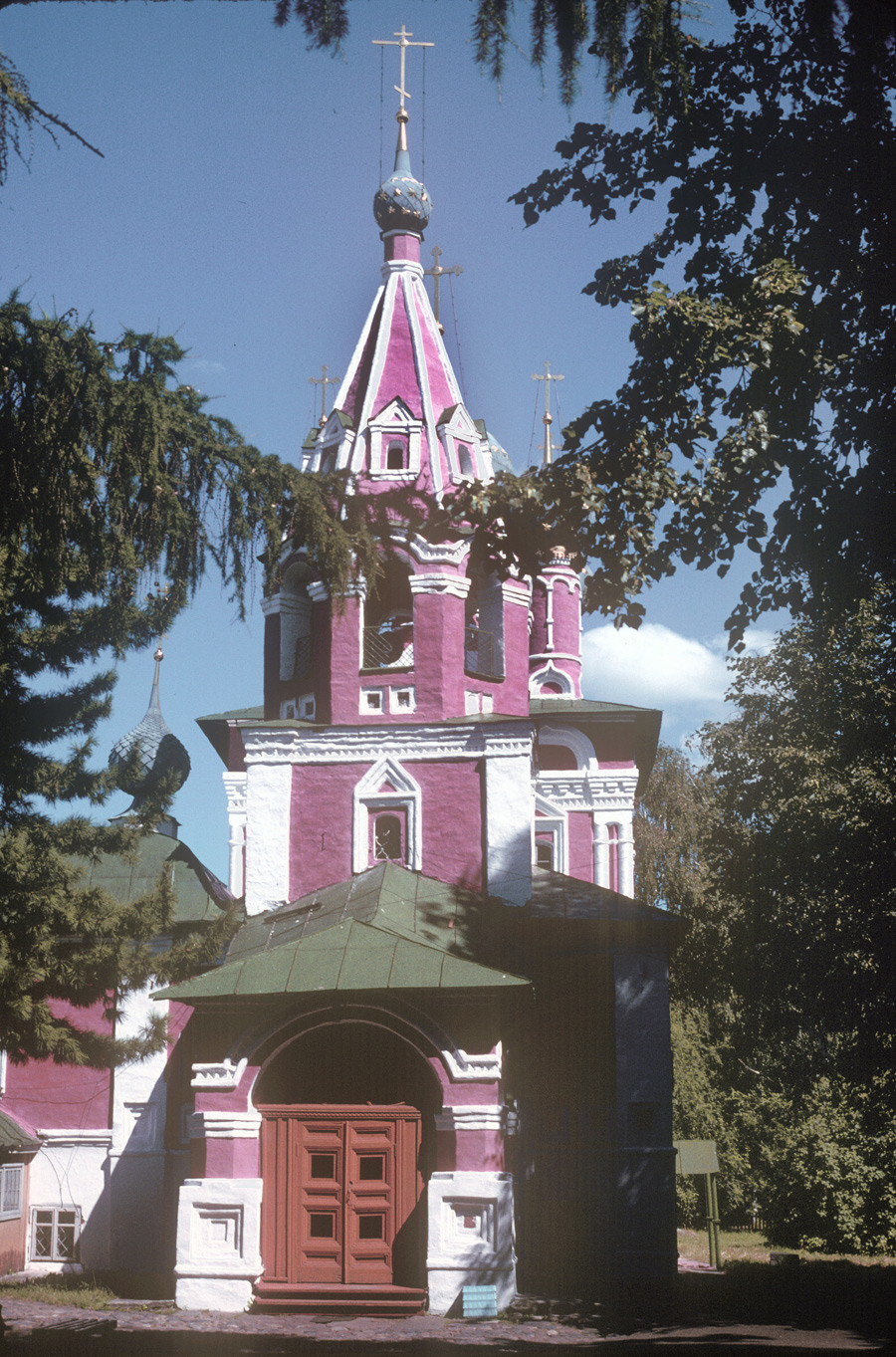 Because of the traumatic memories associated with the death of the Tsarevich—and the need for healing—Uglich was filled with churches and chapels. By one count there were thirty churches in addition to the churches in three monastic institutions. (Approximately half of these churches were demolished the Soviet period.)

Primary among them was the Church of Tsarevich Dmitry “on the Blood,” so named because of its location at the site of the child’s violent death. In 1606, the year of Dmitry’s canonization, was marked by a log chapel and then a wooden church in 1630. (In 1606 his remains were reinterred in the Cathedral of Archangel Michael in the Moscow Kremlin.)

As the centennial of Dmitry’s death approached, work began on a brick church with the patronage of the young , Peter I and Ivan V. Both were the sons of Tsar Alexis, and they ruled together from 1682 to 1696 at another exceedingly complicated time in Russian dynastic history.

Consecrated in 1692, the church design followed a traditional 17th-century form, with a bell tower over the main entrance at the west end of a one-story refectory. Extending from the east wall is an apse that contains the primary altar, said to be located on the very site of Dmitry’s death 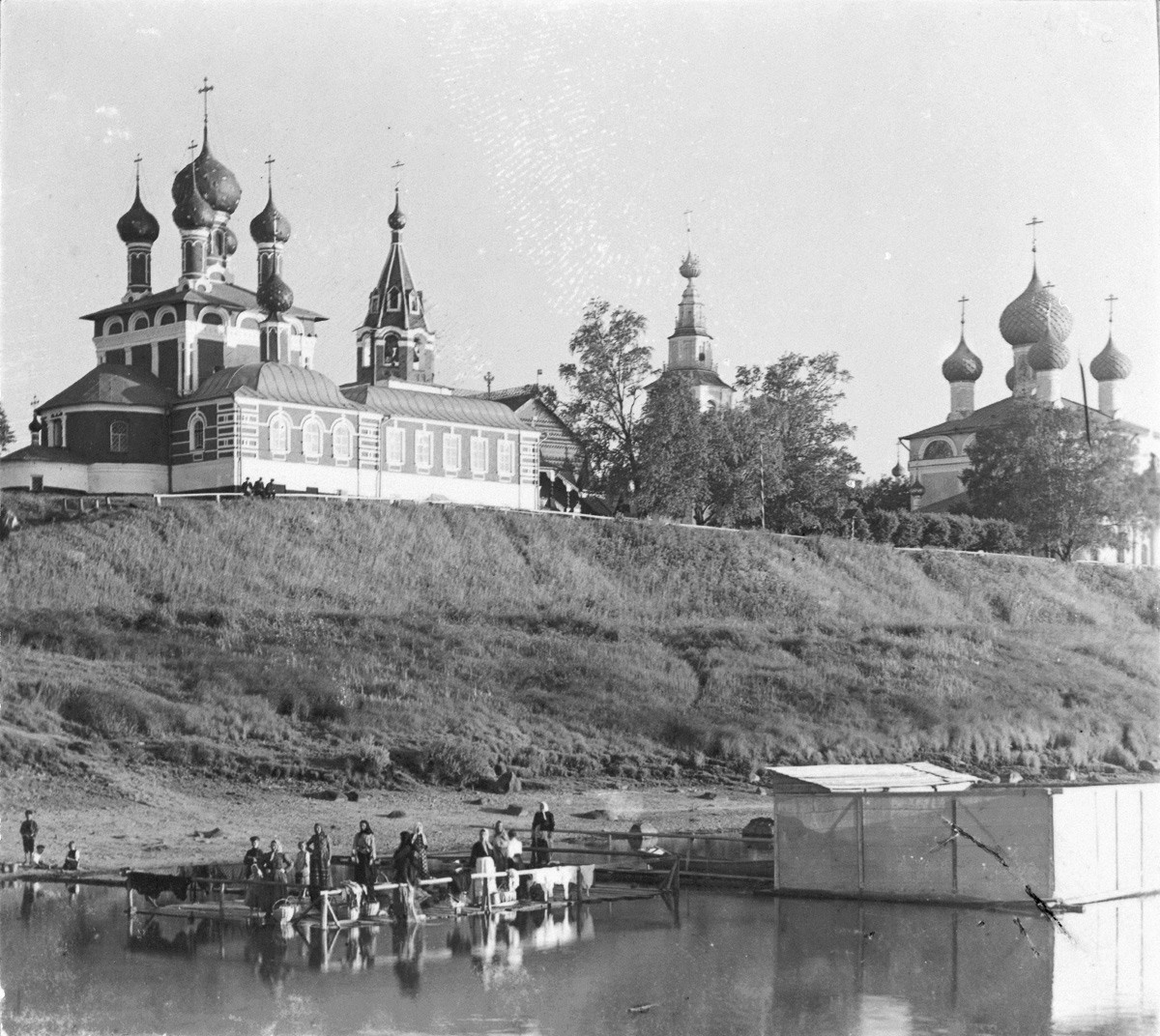 Prokudin-Gorsky photographed the monument from all sides, as did I. His northeast view is remarkable not only for the image of the church above the but also for its view of women doing wash at the river’s edge. I photographed a similar scene on the Sukhona River near Totma and have included it for its timeless quality 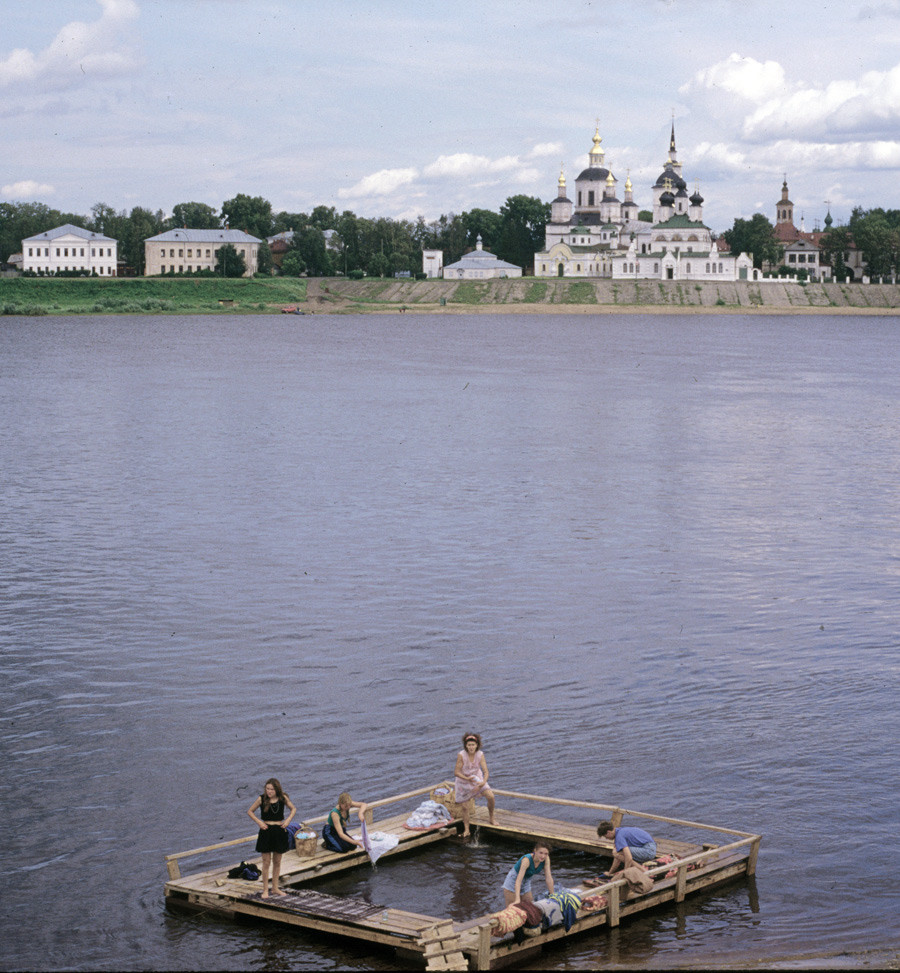 also photographed several sacred relics associated with Tsarevich Dmitry inside the church. He did not, however, make wider views of the church interior, which was covered with frescoes painted in the late 18th century. In addition to Biblical scenes, the frescoes included scenes from the life of the Tsarevich. Particularly vivid is the west wall, which displays the “anti-Godunov” version of events on that fateful day.

Although arguments continue about the circumstances of Dmitry’s death, the Church of Tsarevich Dmitry has transcended these quarrels to become the main historic site of Uglich. Visited each year by thousands of pilgrims and tourists, the church stands above the Volga as a vibrant example of Russian art. 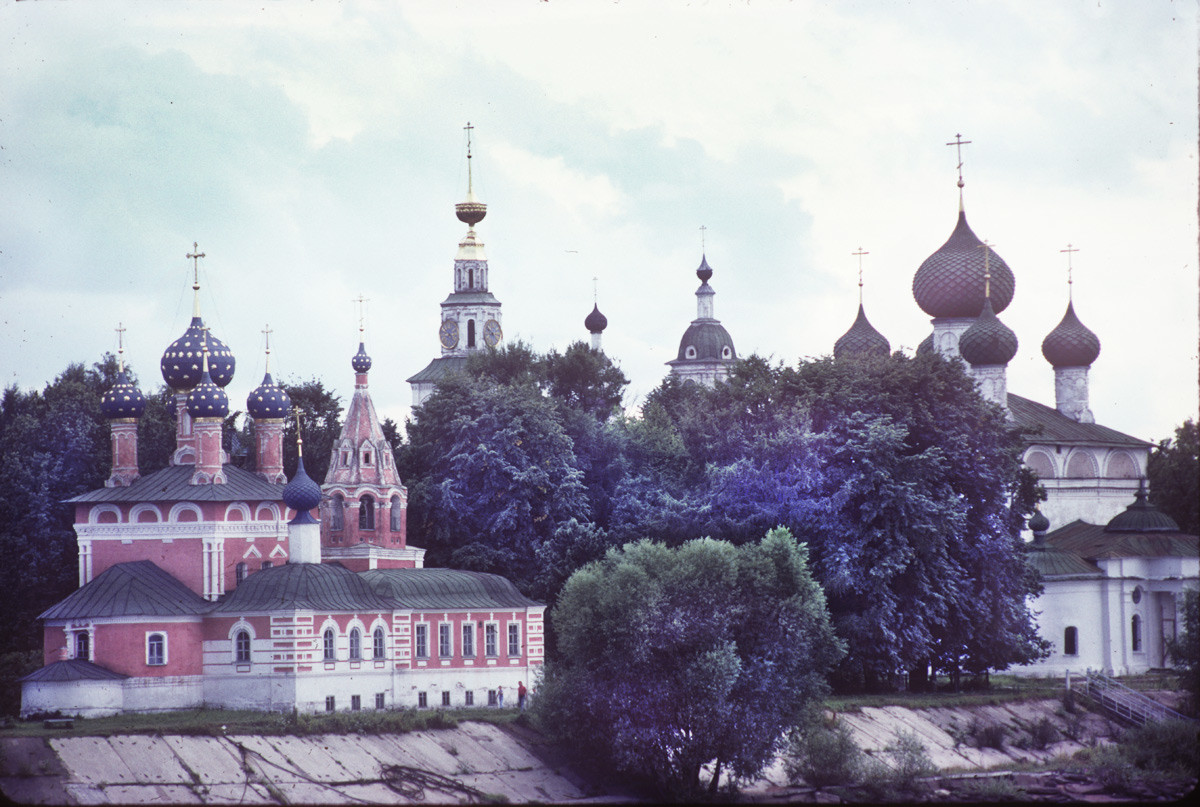