How many Father Frosts are there in Russia? (PHOTOS) 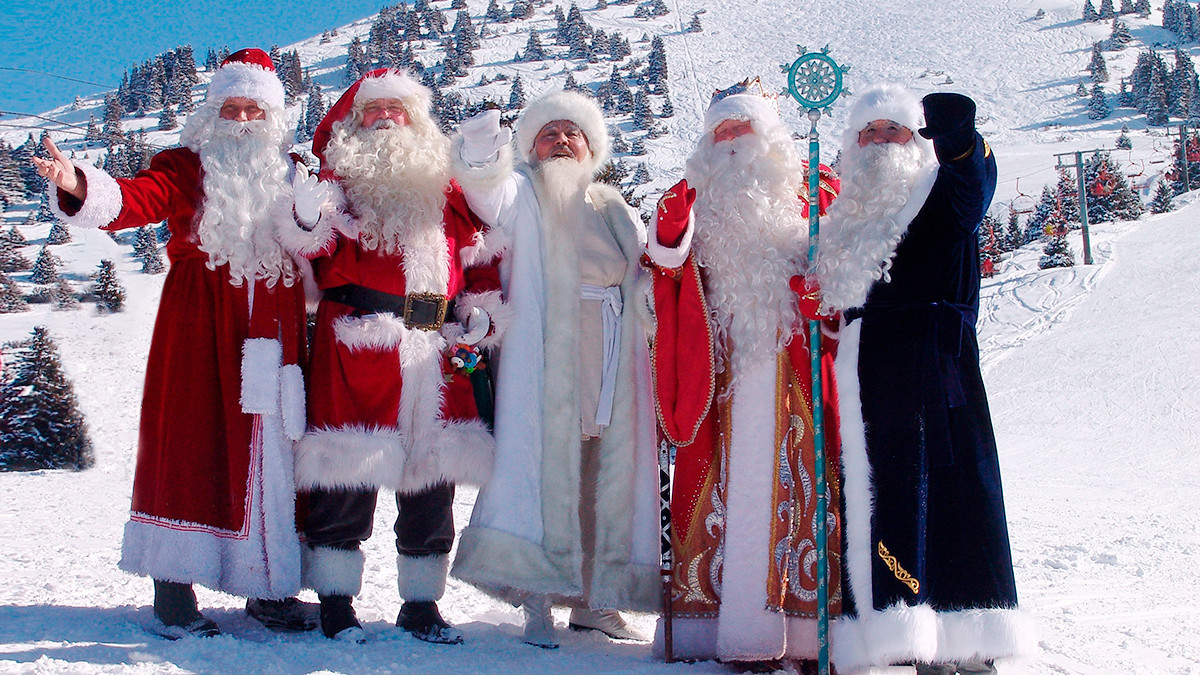 Vladislav Ushakov/Sputnik
Among the diverse peoples of Russia, many ethnic groups have their own Father Frost (Santa). Check out our top 10 list of white-bearded gift-bearers.

1. Father Frost of all the 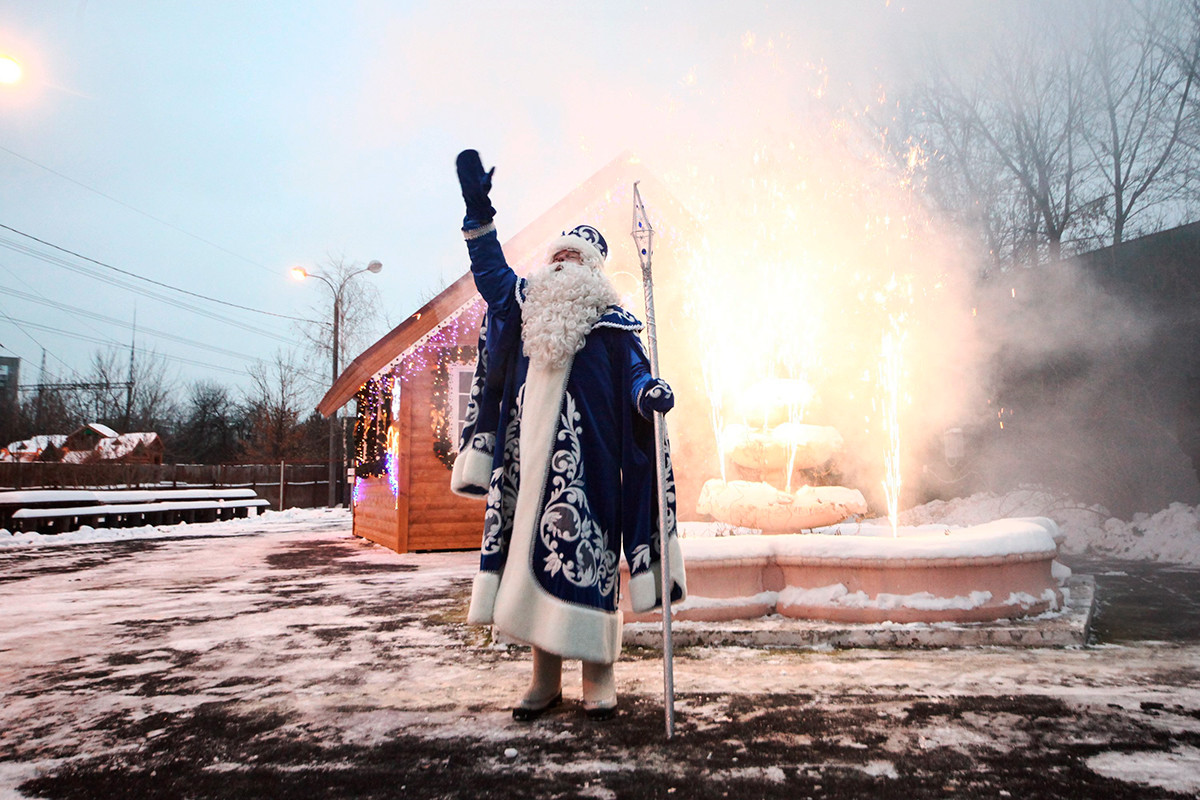 Frost, the embodiment of Russian New Year, officially lives in the Vologda region in the town of Veliky Ustyug. It is here that children from all over Russia send letters with requests for presents. He lives with his granddaughter, Snegurochka (Snow Maiden). Without them, New Year is simply unimaginable.

Father Frost is easily recognizable by his long red or blue coat trimmed with white fur, matching hat, and huge white beard. In his he holds a long staff, which, according to legend, can freeze or thaw any living creature. 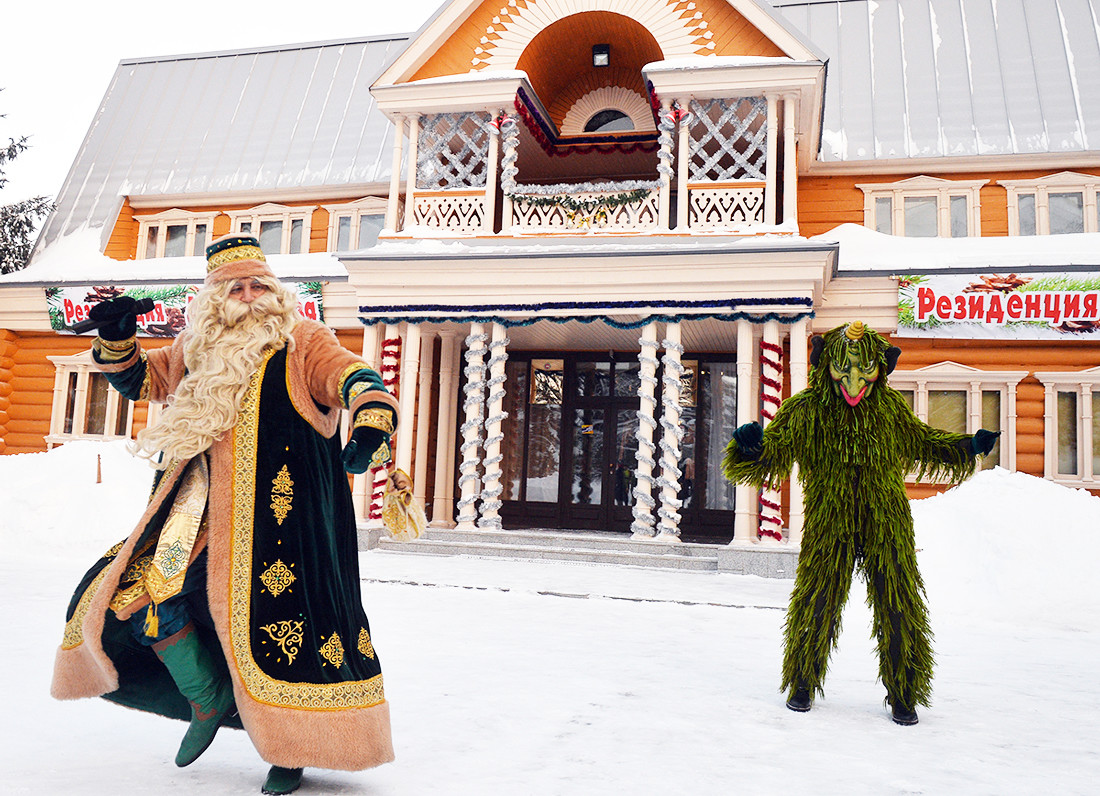 The village of Yana Kyrlay in the Muslim Republic of Tatarstan is home to Father Frost’s brother Kysh Babai. The fur coat is replaced by a blue and the hat by a skullcap. And instead of a granddaughter, he has a daughter by the name of Kar Kyzy. Living with them at their residence are the magical creatures Shurale the forest sprite, the kind-hearted Shaitan, and the brave hero Batyr. 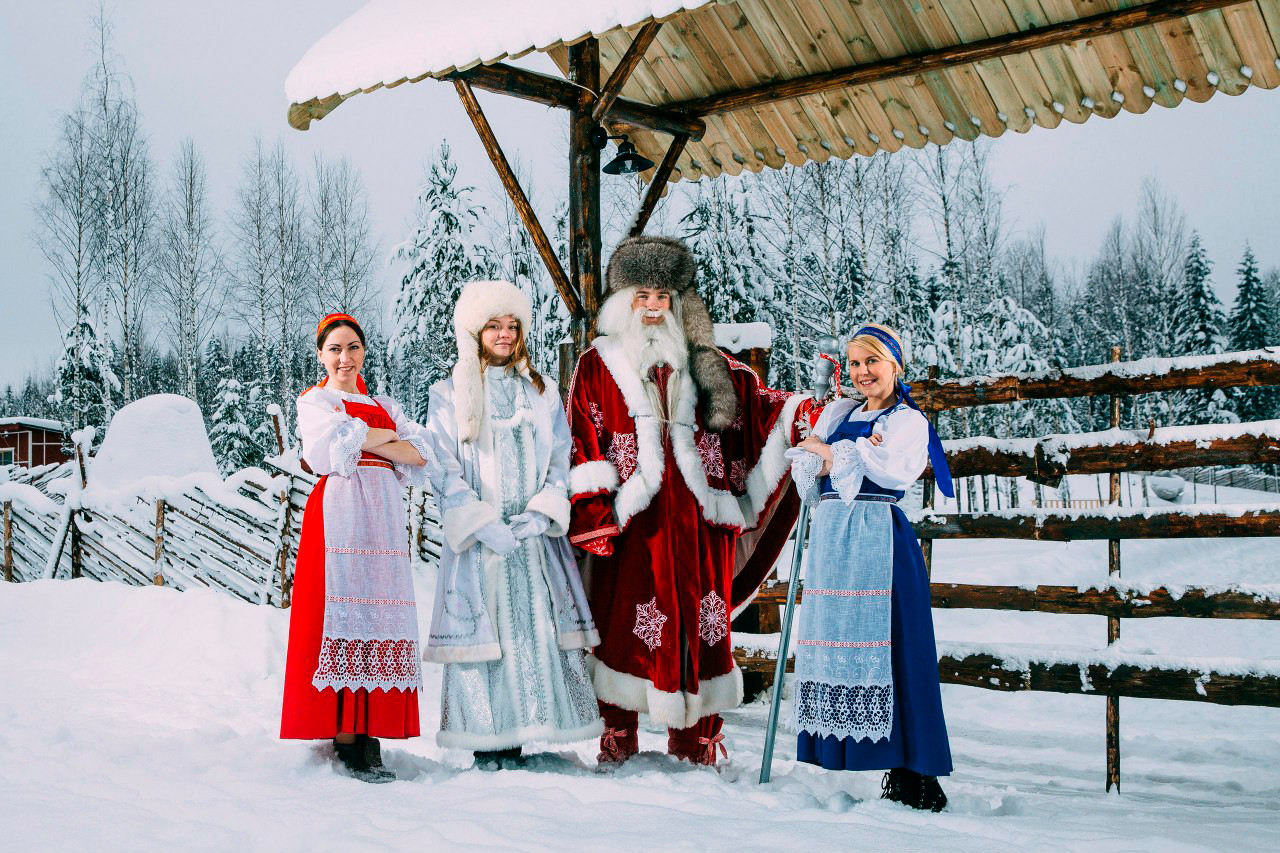 Translated from the Karelian language, Talvi Ukko means “Winter Grandfather.” He lives near Petrozavodsk, the capital of the Republic of Karelia in northern Russian, along with his team of reindeer, husky, and malamute helpers. So people visit his residence not only to receive gifts, but to ride reindeer and dog sleds, and drink tea with Karelian pasties, known as kalitkas. 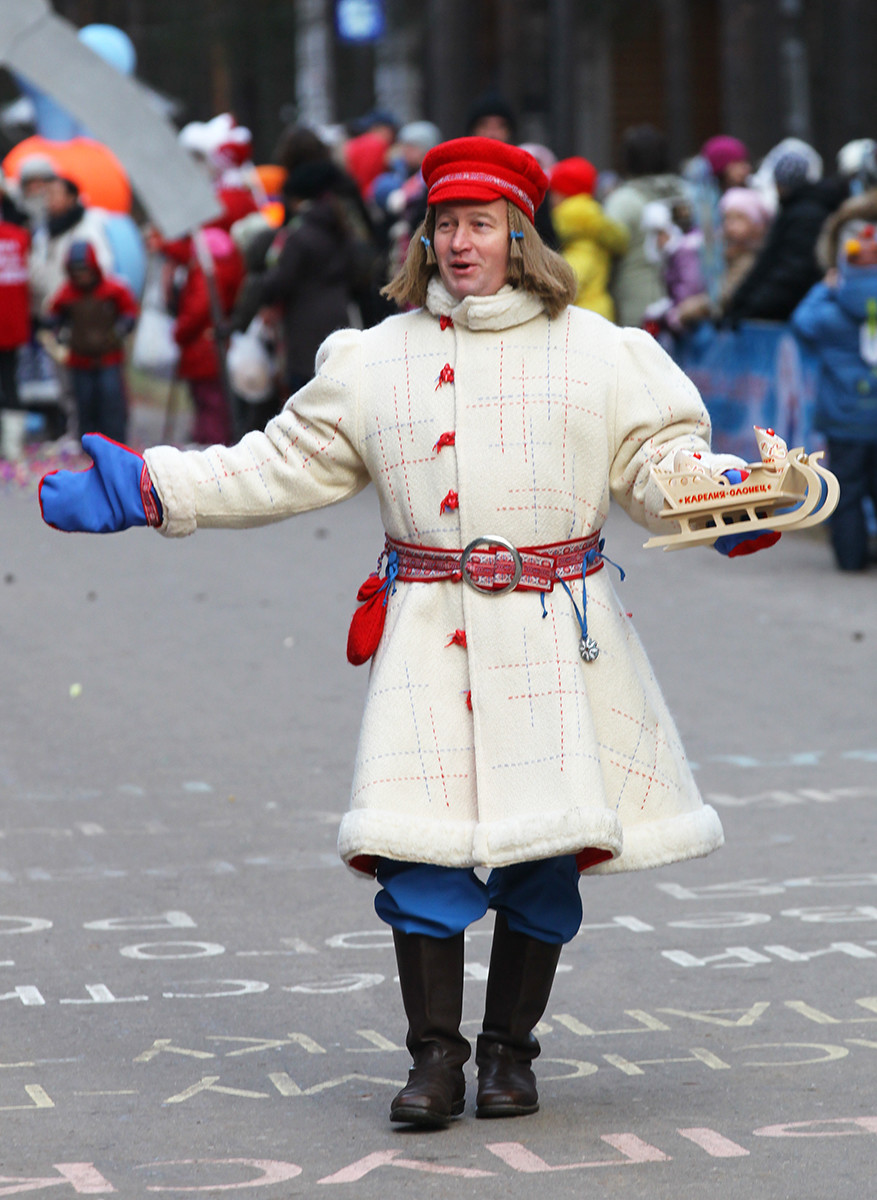 Still in Karelia, this time in the medieval town of Olonets further south, there lives another Father Frost called Pakkaine, whose appearance offers no clue as to his real identity. His name, appropriately, translates as “frosty weather.” According to legend, Pakkaine was a jolly fellow, who loved winter fun and travel. But he was also very fond of preening in front of the mirror. It is said that in every town where he stayed, his reflection carried on living there. Every year on December 1 all these reflections would make their way to Olonets to try to prove that they were the real Pakkaine. True or not (you decide), today folk festivals and Father Frost competitions are held at his fabled residence. Pakkaine is buddies with Talvi Ukko and Father and considers them his elder brothers. 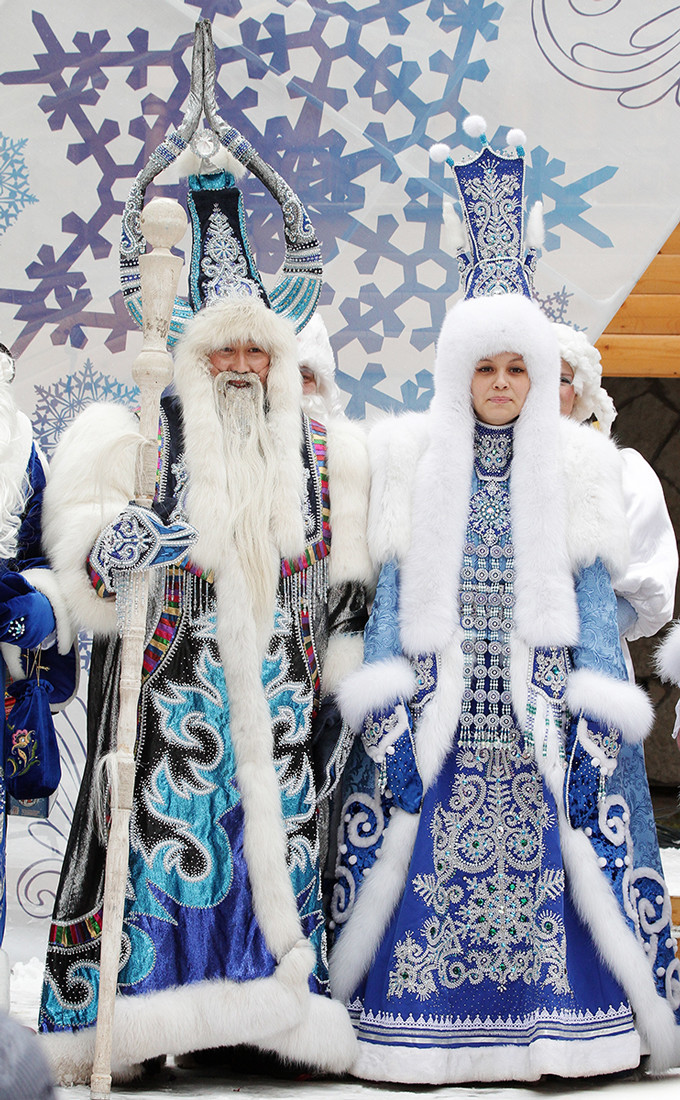 Further east, Yakutia has two Father all of its own. Chyskhaan is severe like the taiga winter—his name translates as “penetrating cold.” Half-man, half-bull, when his horns grow, winter arrives in Yakutia, and when they drop off, summer comes. The “lord of the cold” has a wife, the star maiden Cholbon Kuo, and his mother-in-law is Winter herself.

The other half of the double act is the good Ehee Gyul, who takes children reindeer sledding and gives them gifts. He has a granddaughter, Kharchaan, but only the hardiest travelers can get to their residence in Oymyakon, one of the coldest inhabited locales on Earth, where the mercury drops to -70C. 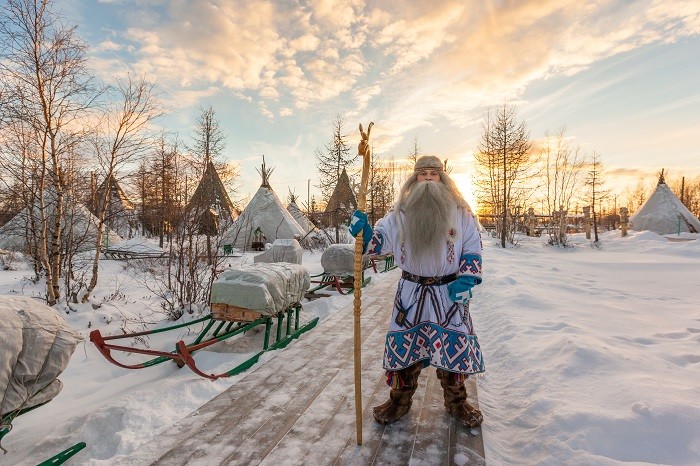 Nenets version of Father Frost lives at world’s end, sports a long gray beard, wears the traditional clothes of northern nomads, and carries a tambourine for performing rites and rituals. Yamal Iri uses it to drive away evil spirits from people’s homes. If you have a cherished desire, touch his staff and it will surely come true. 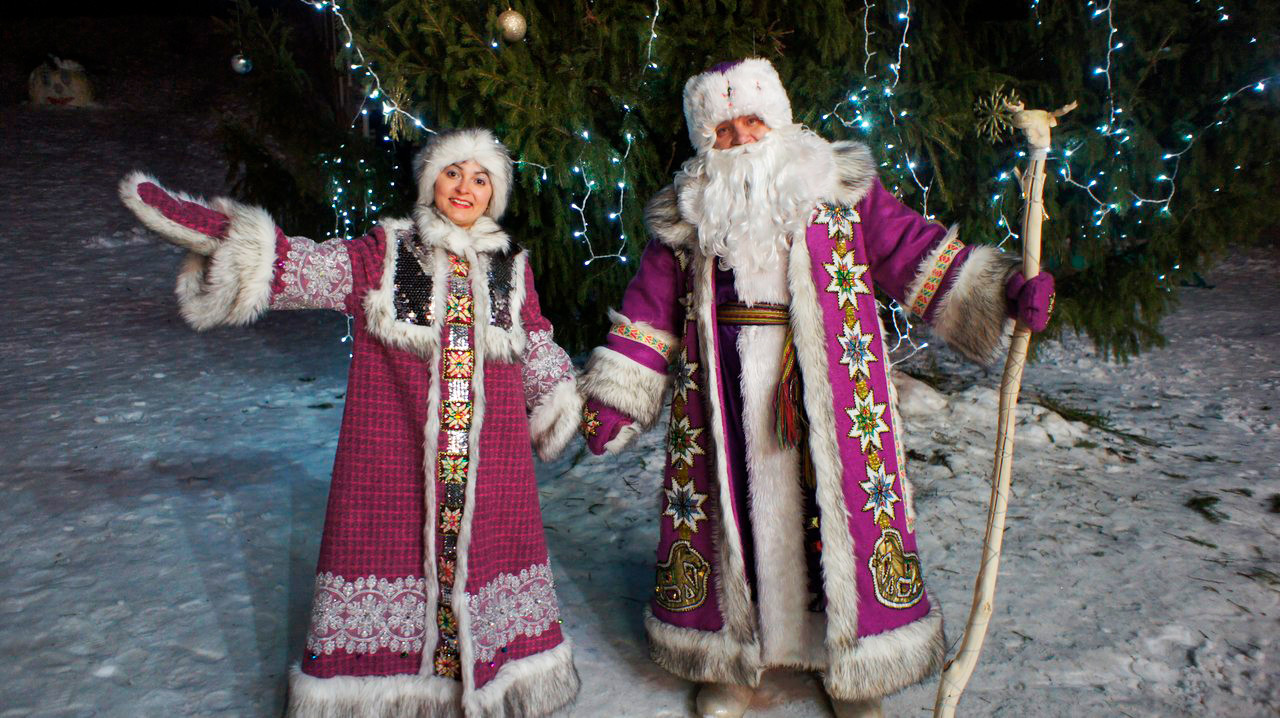 The giant Tol Babai has a crooked staff from his long years of wandering the globe. Legend has it that during his travels he learned to communicate with animals and plants, yet people were always slightly fearful of him. Only children wanted to be friends with the giant. Ever since, as a thank-you, he gives presents to his little friends and invites them to visit him. He is easy to recognize by his purple coat and birch-bark box for carrying gifts for his friends. 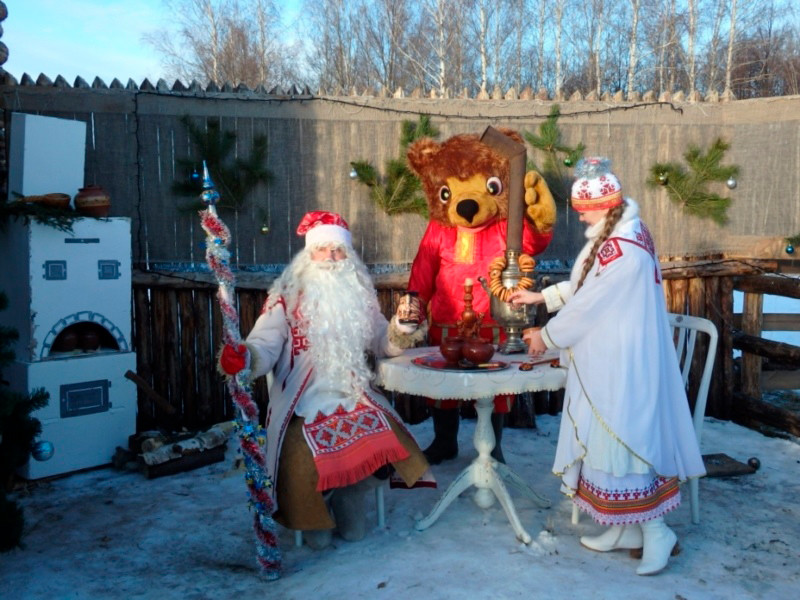 In times of yore, the peoples of the Chuvash Republic celebrated New Year during the holiday of Surkhuri (literally “sheep’s leg,” because after the festivities people used to catch sheep by the leg and tell fortunes for the coming year based on the color, black or white). The chief magic spirit of the Chuvash holiday is Khel Muchi, aided by his granddaughter Yur Pike. Their box of tricks includes a talking samovar, a chest of wishes, and a “lucky” clock. Meeting Khel Muchi on New Year’s Eve is believed to ensure a successful year ahead. 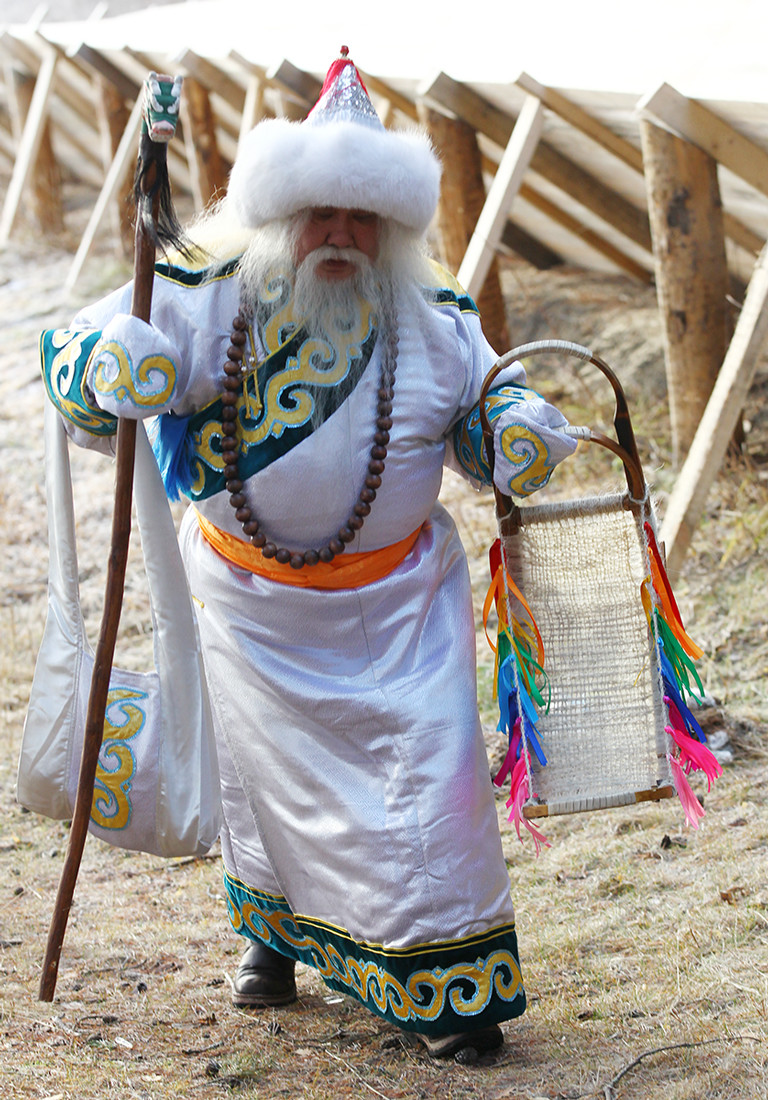 The Buddhist region of Buryatia reveres its “white elder.” He is believed to bring peace, longevity, and family prosperity. Ubugun carries a staff bearing the head of a dragon, one of the main Buddhist symbols. 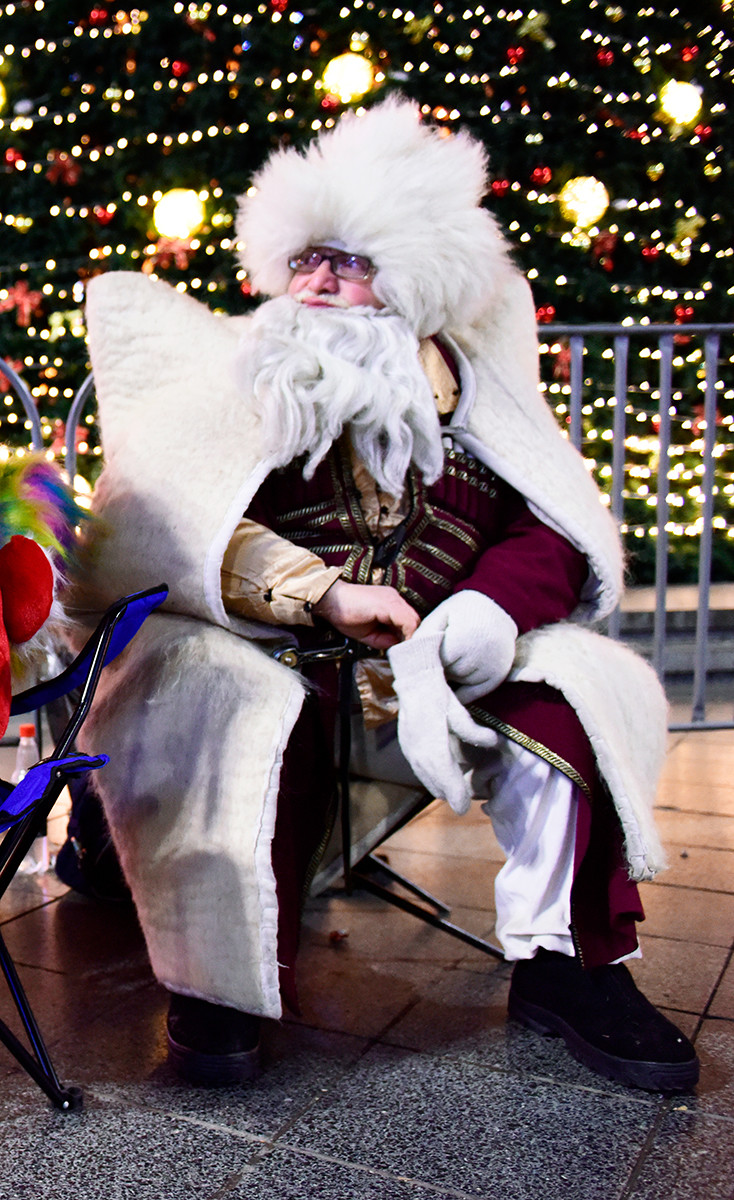 name of the Father Frost of the Caucasus translates as “Grandfather Fire.” Artkhuron is an ancient deity of the sun and fire, who delivers wealth and well-being to people. In Ossetia, a special round cake is baked on New Year’s Eve in his honor, which according to legend brings happiness.