Yaroslavl’s Dormition Cathedral: The resurrection of a monument

Travel
William Brumfield
The church’s turbulent history mirrored that of Russia itself. 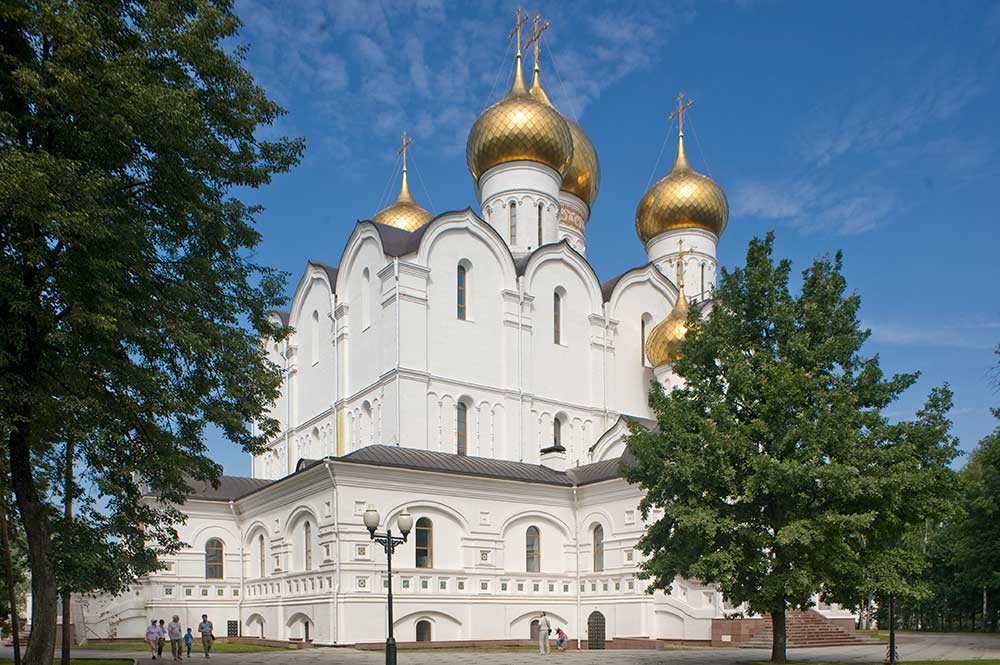 Yaroslavl. Cathedral of the Dormition of the Virgin. Southwest view. August 14, 2017.

Logistical support for his project came from the Ministry of Transportation, which facilitated his photography on Russia’s waterways and expanding rail network. His trips along the upper and middle parts of the Volga River proved especially productive. One of the richest historic towns on the river is Yaroslavl, located 150 miles northeast of Moscow 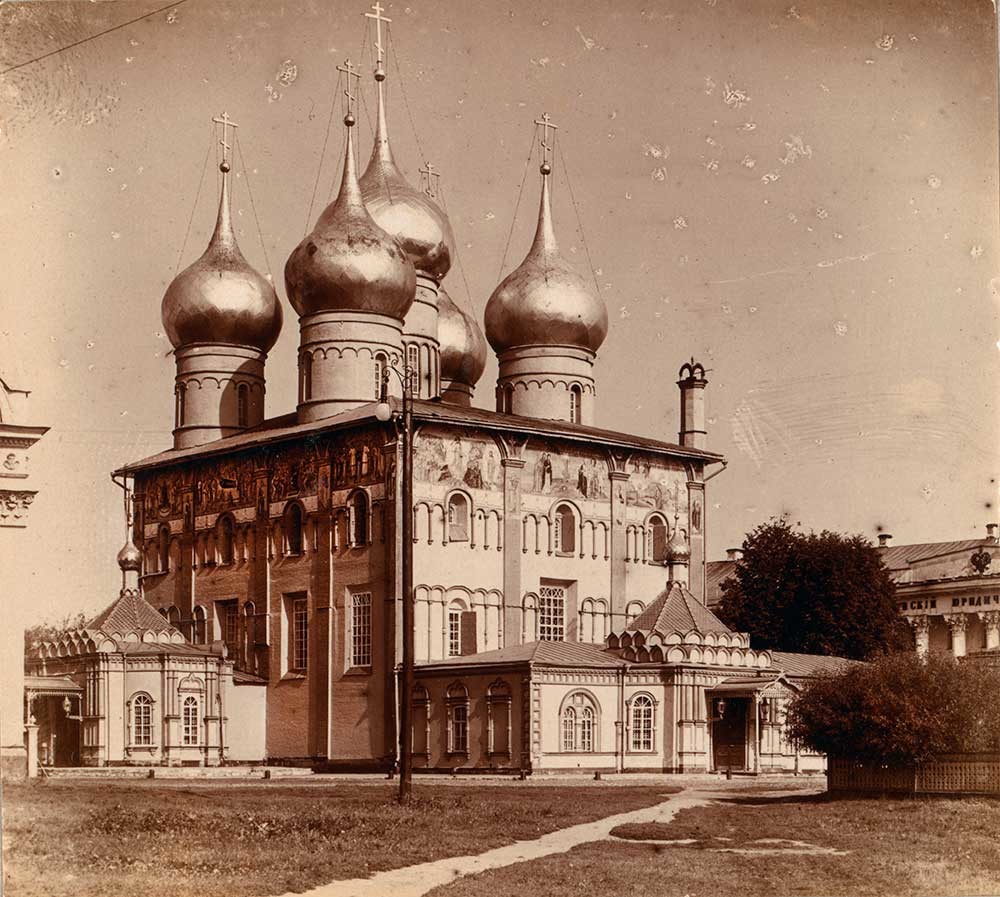 Yaroslavl. Cathedral of the Dormition of the Virgin. Northwest view. Summer 1910.

is now a large regional center (population around 600,000) with an extensive industrial base anchored by petrochemicals. But fortunately, its historic monuments have been preserved. The town’s beauty is enhanced by its location on a tree-lined embankment overlooking the Volga.

The central ornament of this boulevard was the town’s main cathedral, dedicated to the Dormition of the Virgin. The fate of this structure reflects Russia’s turbulent history over the past century to a degree matched by few others 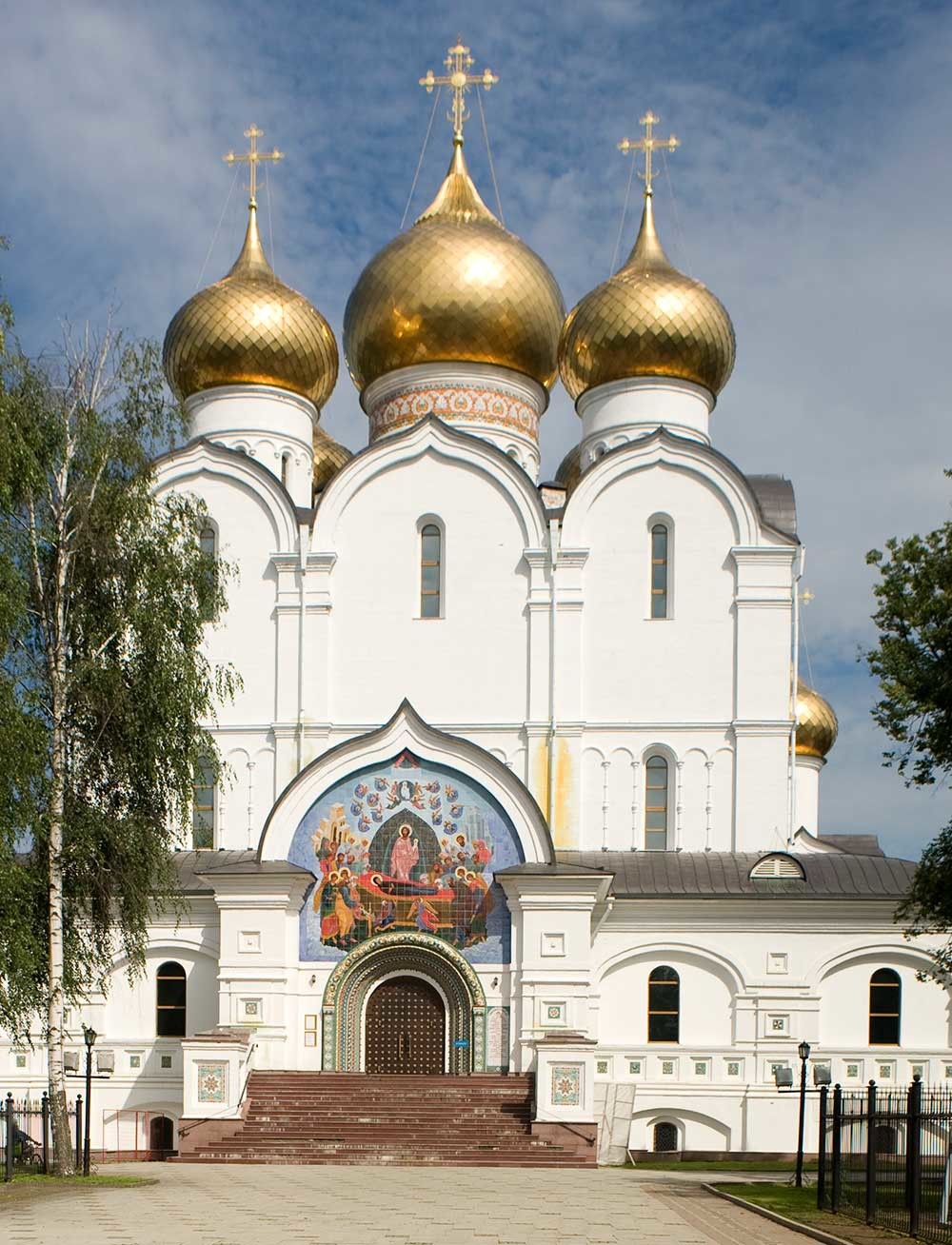 the monuments Prokudin-Gorsky photographed in Yaroslavl in 1910, the Dormition Cathedral occupies an important place. Unfortunately, the original glass negatives of the photographs are missing from the Library of Congress collection. Nonetheless, the monochrome images from his album of contact prints provide exceptionally valuable information about the pre-revolutionary state of the cathedral.

A cultural and economic hub

Yaroslavl was founded in the early 11th century by the Kievan grand prince Yaroslav the Wise--one of the greatest rulers of medieval Rus. By the early 13th century, the settlement had monasteries with masonry churches. In 1238, it was sacked by the Mongols during their conquest of central Russia. Although recovery from Mongol dominance was slow, union with Muscovy in the 15th century integrated the town into a larger political and economic structure 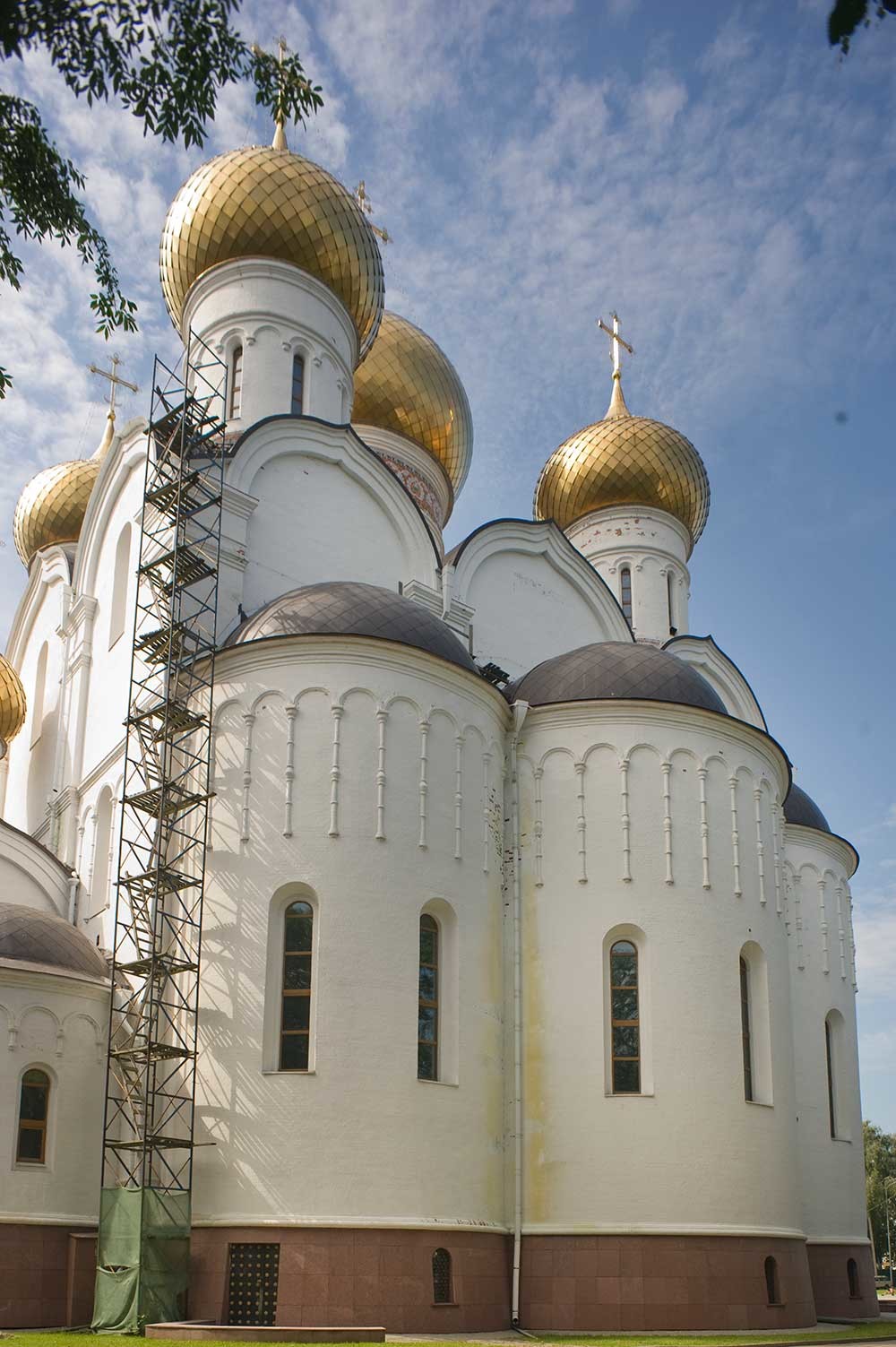 location allowed it to serve as a center not only for trade within the vast Volga River but also for exploitation of the forested expanses of the Russian north. In the latter part of the 16th century, Ivan the Terrible established a port at the Monastery on the Northern Dvina River near the White Sea and thus opened Moscow for commerce with western Europe.

This enhanced Yaroslavl’s strategic position within a mercantile network that stretched from the White Sea to Siberia and the Orient. With new trading possibilities, Yaroslavl attracted colonies of Russian and foreign merchants (English, Dutch, and German) 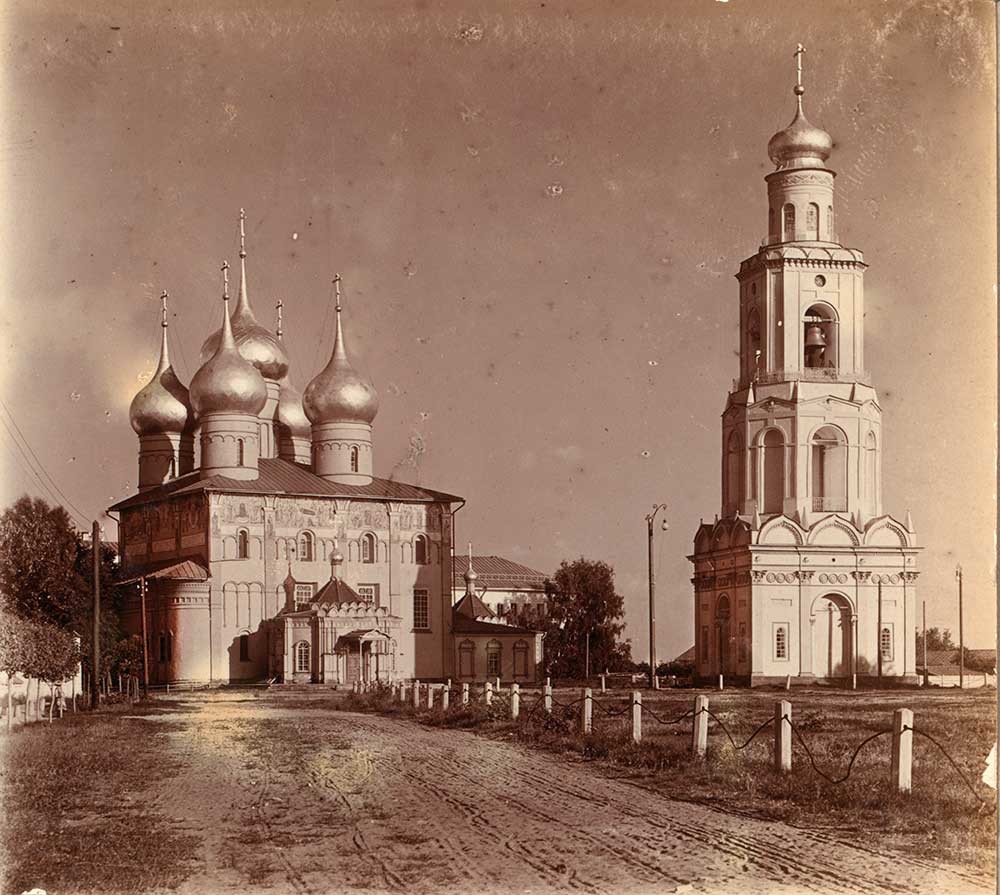 spared the worst of the disorder inflicted on Russia in the latter part of Ivan the Terrible's reign, Yaroslavl’s role as a commercial center declined during the interregnum following the death of Boris Godunov in 1605. Known as the Time of Troubles, this period saw much of the country plundered in the course of political and social chaos. Yaroslavl again eluded the worst of the cataclysm, and in 1612 the city served as a center for rallying national resistance against a Polish occupying force in Moscow.

A return of wealth

The active participation of Yaroslavl's merchants in this campaign brought them extensive trading privileges from the government of the new ruler, Mikhail Fyodorovich, first tsar of the Romanov dynasty. Consequently, during the 17th the city not only accumulated the wealth necessary to build elaborately decorated churches, but also established connections with cultural centers to the west 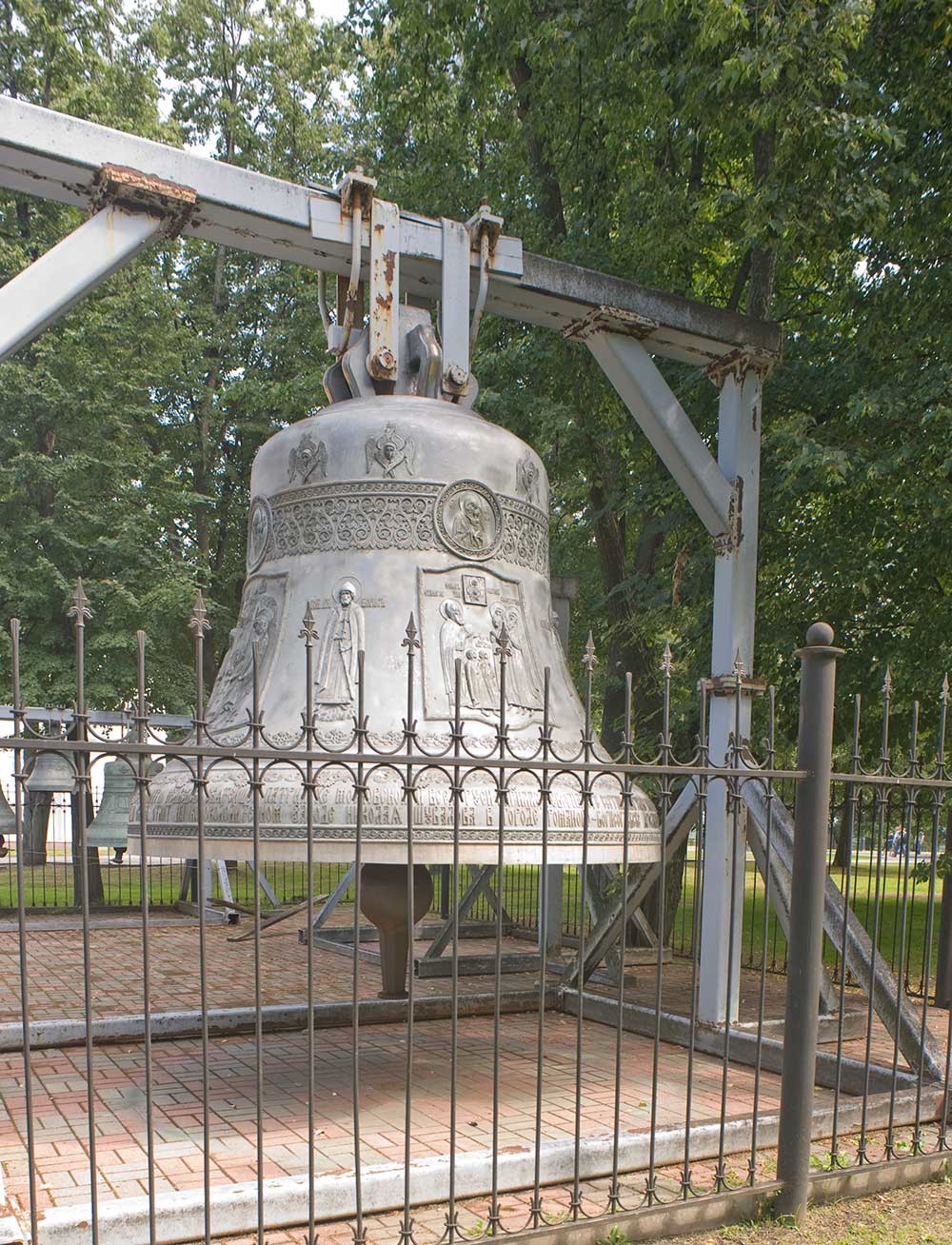 Moscow could rival Yaroslavl in its concentration of new churches, sponsored by a combination of wealthy merchants, city districts, and trade associations. In Yaroslavl during the 17th century, 44 masonry churches - most of size - were erected within the area’s 35 parishes.

The largest among the shrines was the town’s main cathedral, dedicated to the Dormition of the Virgin and originally built of brick in the early 13th century during the reign of Prince Vsevolodovich of Rostov 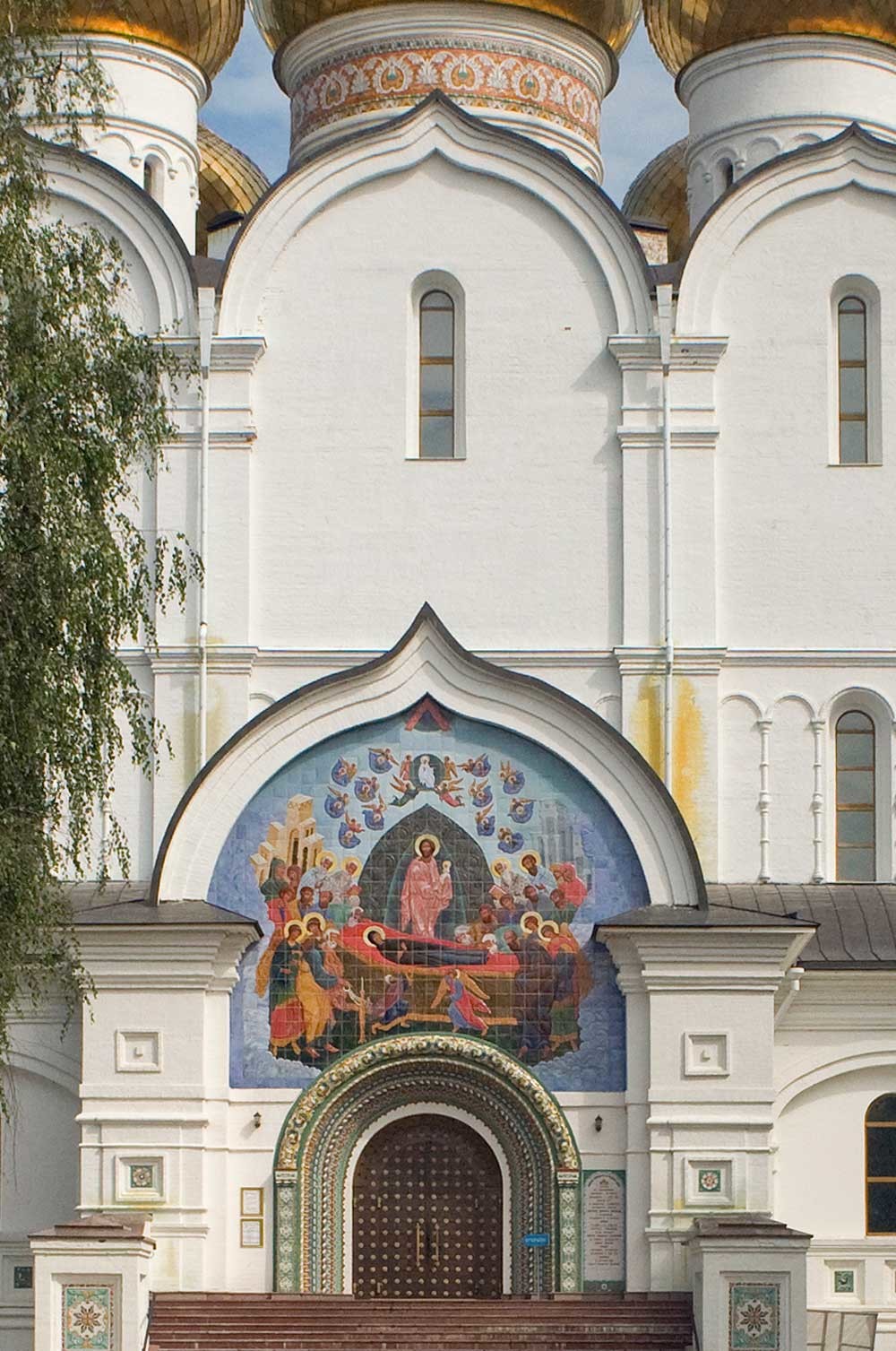 structure was rebuilt multiple times before the mid 17th  when Tsar Alexei Mikhailovich commanded that it be rebuilt on a different site overlooking the Volga. The cathedral that Prokudin‑Gorsky photographed was erected in the 1660s, with numerous modifications made over the next two centuries.

In its design, the structure resembled the Dormition Cathedral in the Moscow Kremlin (), particularly as reiterated in other large cathedrals during the 16th century. The facades are accented with blind arcading and culminate in semi- gables known as . These gables were partially obscured by a level roofline, perhaps a later modification. The structure was crowned by five large domes 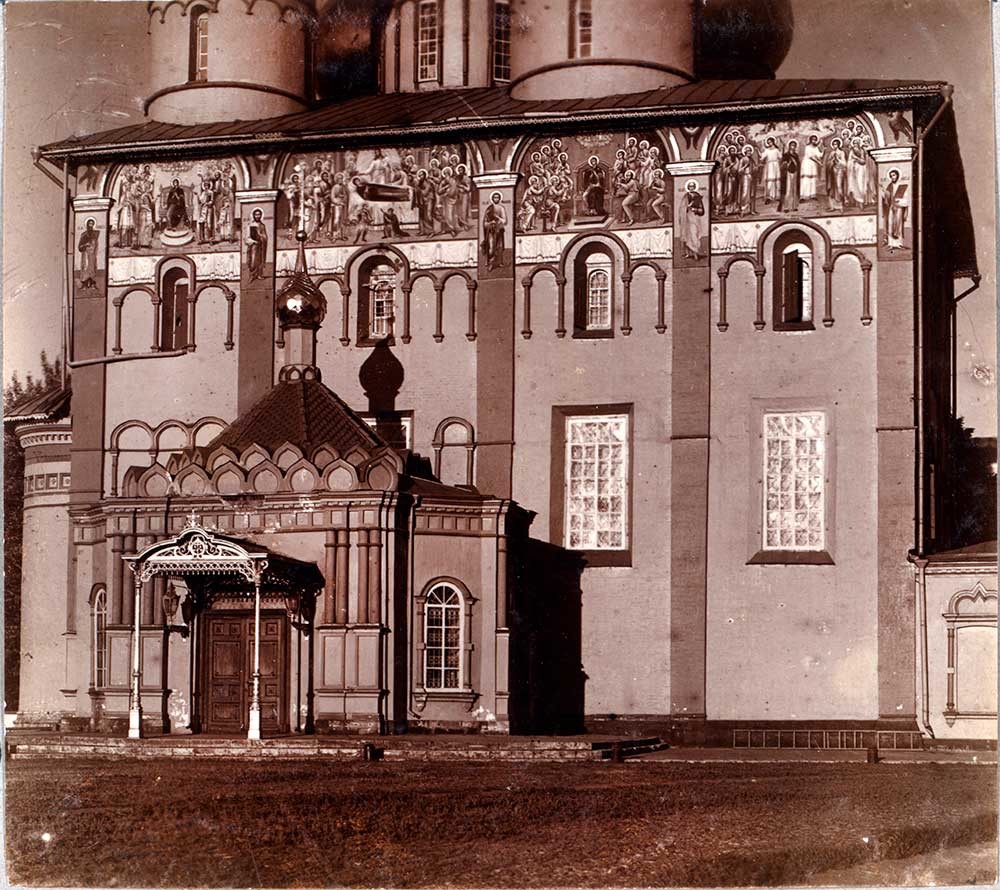 Cathedral of the Dormition. North facade with wall paintings. Summer 1910.

interior also bore a resemblance to the main Moscow cathedral, with a similar plan and walls covered with frescoes painted in 1671-74. A distinctive local feature was the addition of decorative porches to the main facades, visible in Prokudin-Gorsky’s views.

An adjacent four-tiered bell tower, visible in one of Prokudin-Gorsky’s photographs, was completed in 1836 to in the Russo-Byzantine style by the architect Avraam Melnikov. Also in the 19th century, exterior frescoes on the upper parts of the facades were repainted in an academic style visible in Prokudin‑Gorsky’s closer views. In light of the cathedral’s subsequent history, it is regrettable that his three-color separation negatives are missing. They would have shown the colors of artwork that have been lost forever.

During a two-week Yaroslavl uprising against the Bolsheviks in July 1918, the Dormition Cathedral was heavily shelled. Partially repaired in the early 1920s, it was closed in 1929 and all later additions were removed from the core 17th-century structure—perhaps a prelude to . Instead, the cathedral was demolished at the height of the Stalinist repressions in 1937 and the site converted to a park 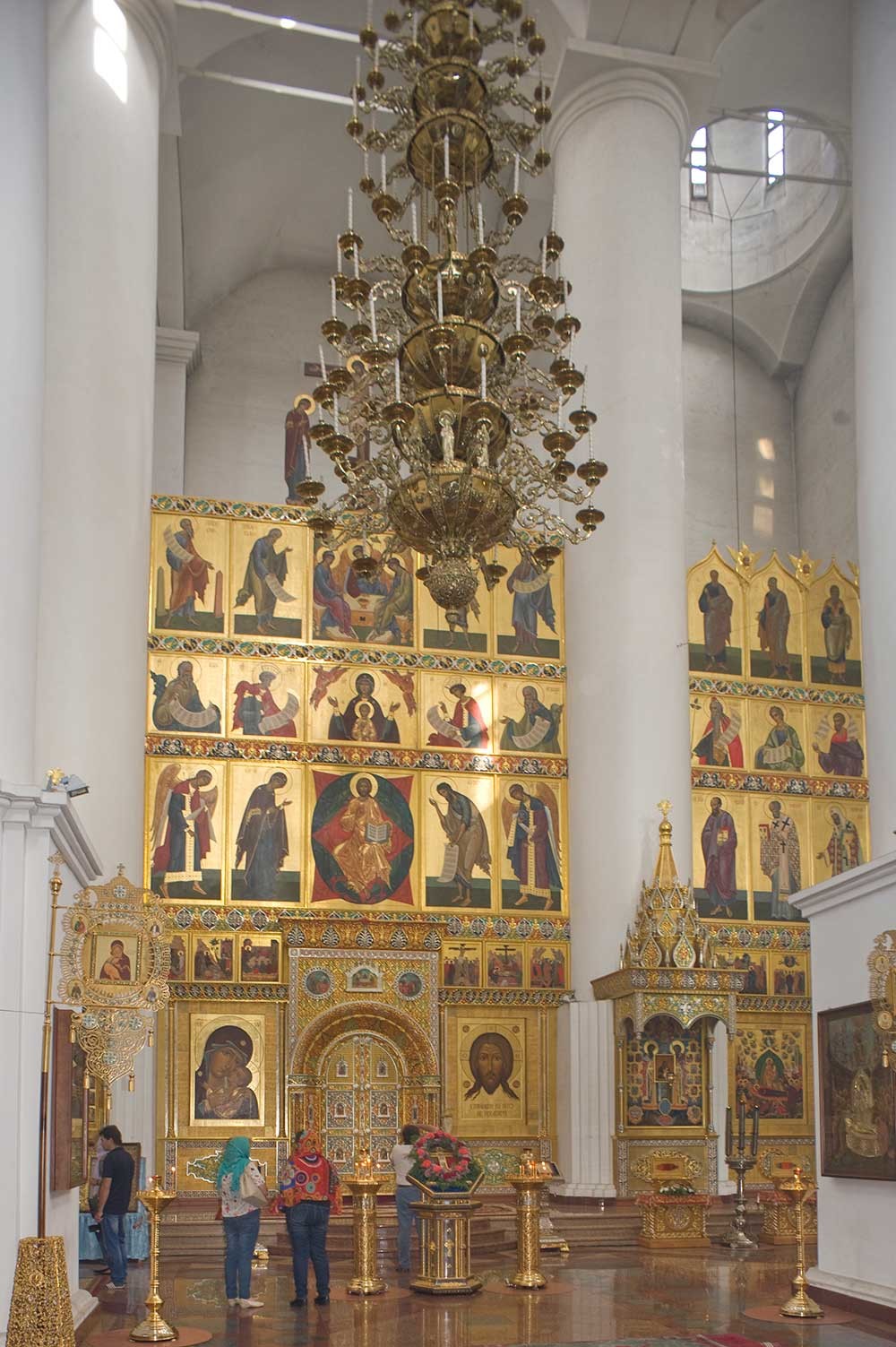 2004 a campaign to rebuild the shrine was launched with major financial support from a Moscow entrepreneur. Designed by the Moscow architect Alexei Denisov, the new cathedral was built in 2006-12. The outline of its central form resembles the Moscow Dormition Cathedral, with blind arcading on the facades and unobstructed  gables visible in my 2017 photographs.

The new structure lacks the highly ornamented porches, although it has chapels attached to the north and south facades. Some preservationists objected to the larger scale of the new structure and the lack of particular stylistic features of the 17th-century cathedral.

My photographs from 2017 show a different, more restrained approach to the facade paintings, the largest of which, over the main portal on the west façade, portrays the Dormition of Mary, Mother of God. The interior, under the general design of Andrei , has a large iconostasis with icons by Yaroslavl icon painter Yulia Belova. A free-standing bell tower is also planned, but at there is a simple bell mount seen in my photograph 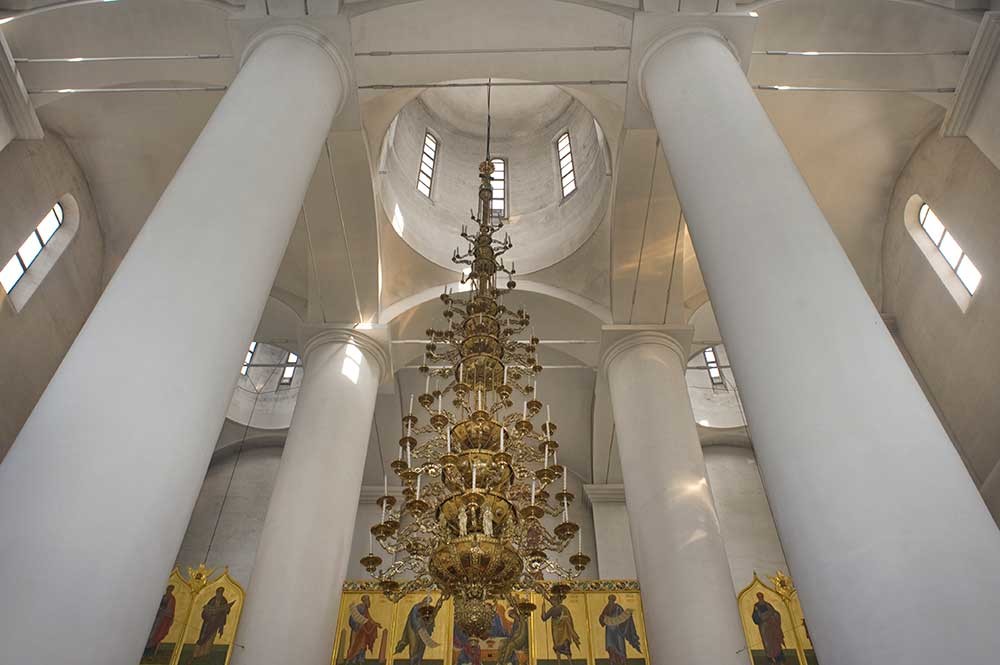