Yurevets: Rescued from the waves of the Volga 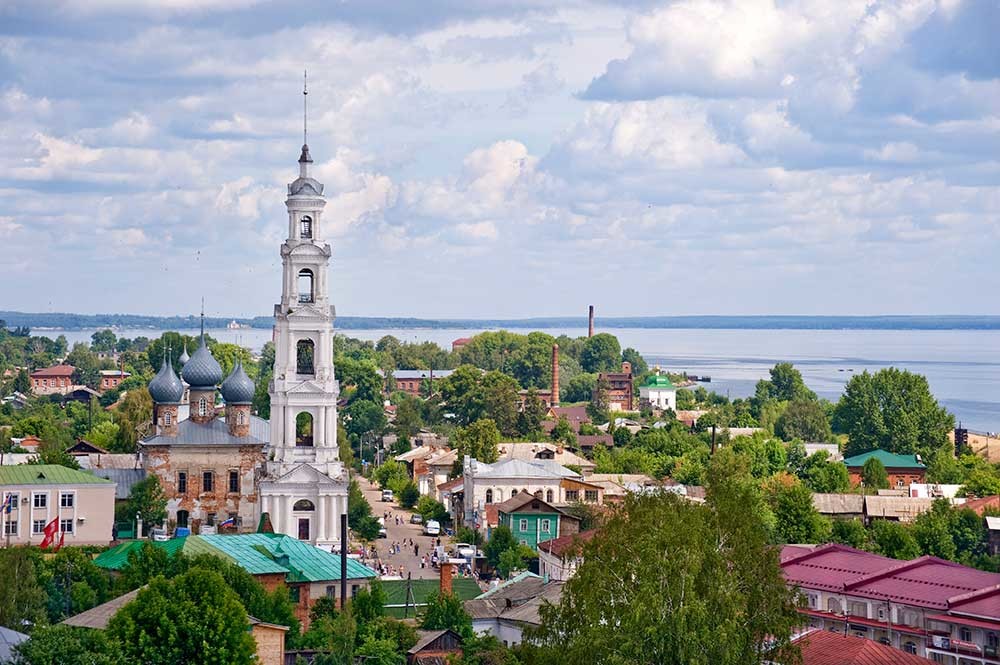 At the beginning of the 20th century, the Russian photographer and inventor Sergei Prokudin-Gorsky devised a complex process for vivid, detailed color photography. His vision of photography as a form of education and enlightenment was demonstrated with special clarity through his photographs of architectural monuments in the historic sites throughout the Russian heartland.

Logistical support for Prokudin-Gorsky’s project came from the Ministry of Transportation, which facilitated his travel on Russia’s waterways and expanding rail network. His work along the Volga River in 1910-1911 proved especially productive. The middle reaches of the Volga unite some of Russia’s best-known historic towns, from Uglich in the north to Yaroslavl and Kostroma northeast of Moscow. 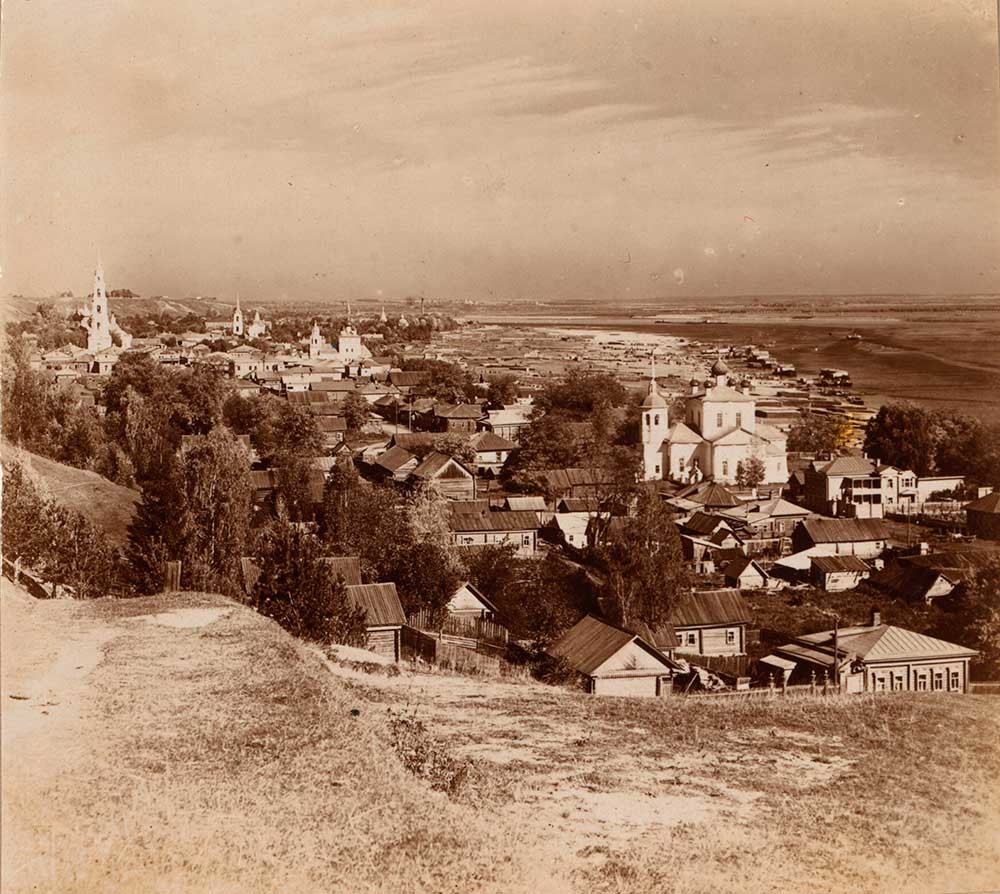 View towards north from fortress hill. From left: bell tower&Cathedral of Entry of Christ into Jerusalem; Church of Transfiguration (razed for bricks in early 1930s); Church of Annunciation (demolished early 1950s ); Church of Purification. Right: Church of Ascension (demolished 1955). Summer 1910.

However, massive hydroelectric projects that reached fruition in the decade after World War II led to a significant increase in the water level. Although beneficial for navigation and power supply, this increase threatened the existence of certain areas that Prokudin-Gorsky photographed.

Among them was the small town of Yurevets, whose population declined over the past to just over 8,000. With the completion of the vast Gorkovskoye Reservoir in 1957, certain parts of the Volga near Yurevets reach a width of 9 miles.  Fortunately, much of the historic area at the river’s edge was saved by the construction of a large levee. 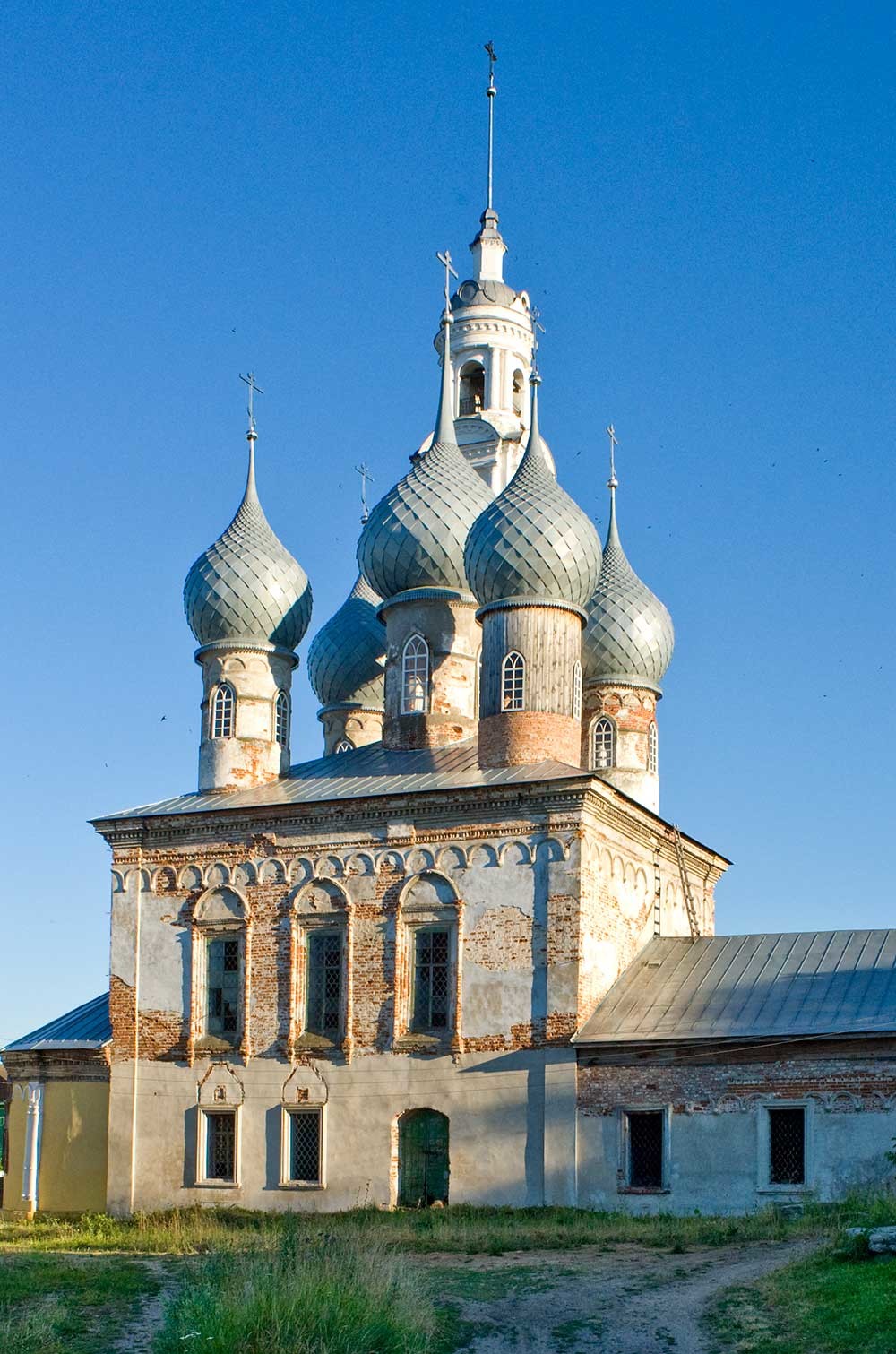 Cathedral of Entry of Christ into Jerusalem. Northwest view. July 14, 2012.

Yurevets is located below Kostroma in an area where the Volga flows due east before turning sharply to the south in the direction of Nizhny Novgorod. This sharp bend on the high right bank formed an ideal point to survey the river over a great distance. It also accounts for the dramatic quality of the town’s landscape—forested bluffs marked by ravines that descend to the main part of Yurevets along the river. 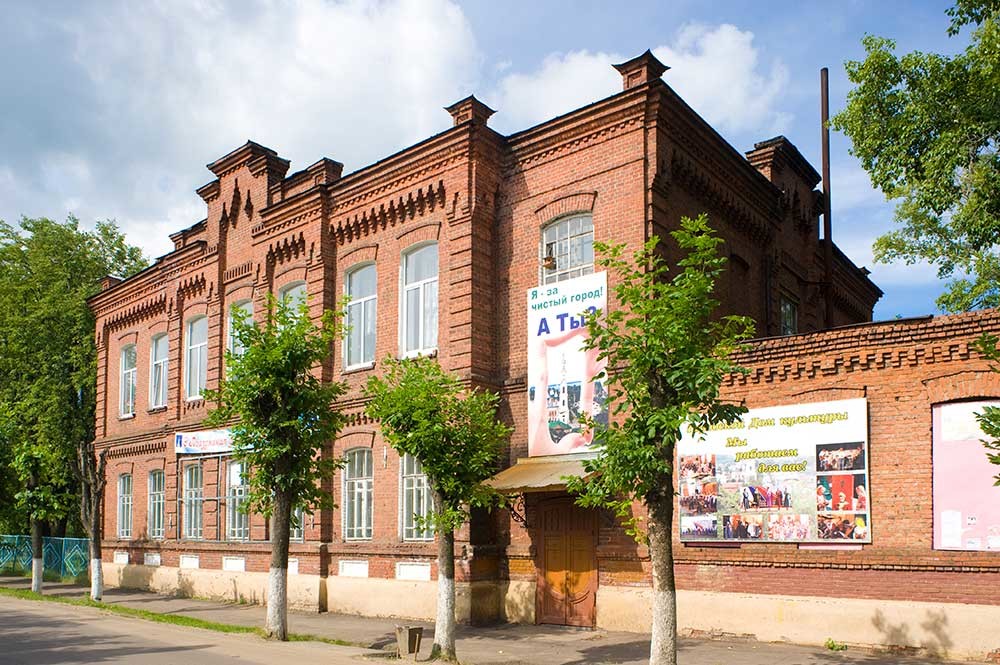 No doubt this beauty imprinted itself on the imagination of the town’s most famous son, the filmmaker Andrei Tarkovsky. It also impressed Prokudin-Gorsky, who took sweeping views of the town in the summer of 1910. Although his original glass negatives of Yurevets are missing from the Library of Congress collection, his contact prints give much information about the town and its relation to the river. My photographs of Yurevets were taken just over a century later, in July 2012 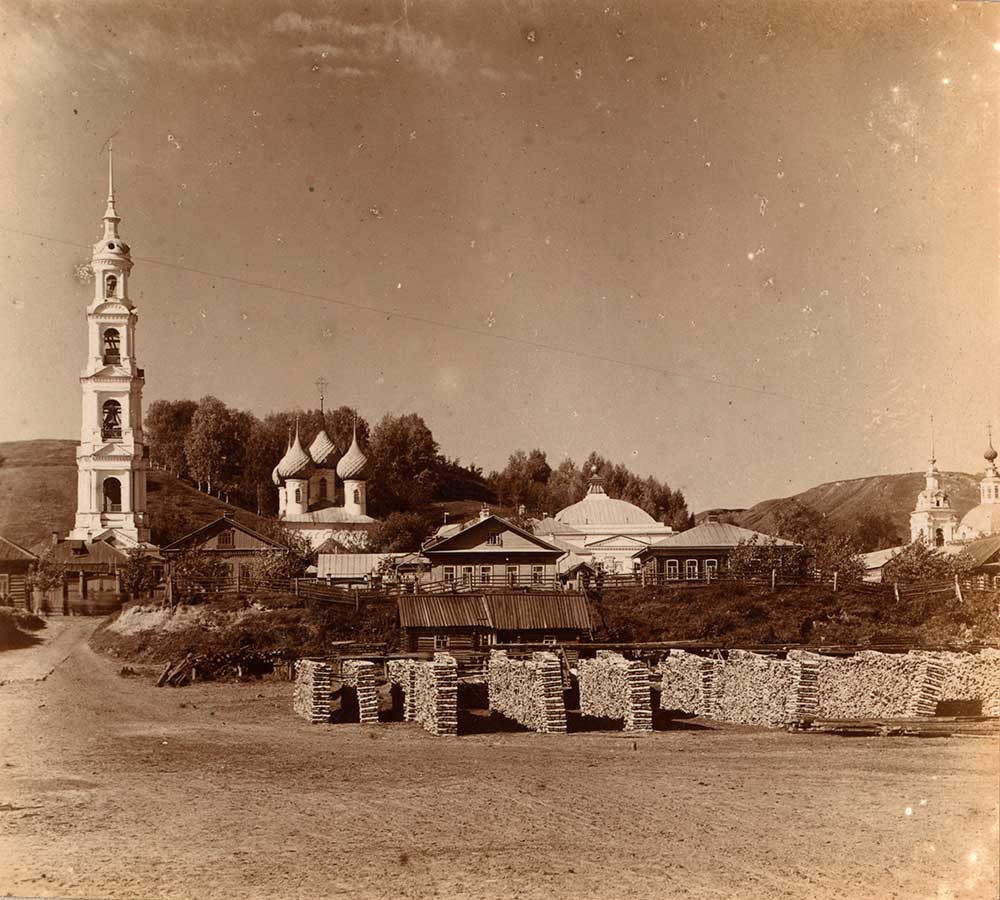 generally accepted date of the town’s founding is 1225. It was formally known as Yurevets Povolzhsky (on the Volga) to distinguish it from other towns with the same name. According to ancient accounts, it was founded by Prince Yury (a Slavic form of George), son of Prince Vsevolod the Great Nest, the last major ruler of Vladimir before the Mongol invasion of 1237.

Legend has it that during a river journey from Yaroslavl to Vladimir, Yury camped on the site and had a miraculous vision of an icon, or sacred image, of St. George. Responding to the heavenly sign, Yury built a log fort and a wooden church dedicated to St. George. Such legends typically served to sanctify what was a pragmatic decision—in this to fortify a strategic river bend. 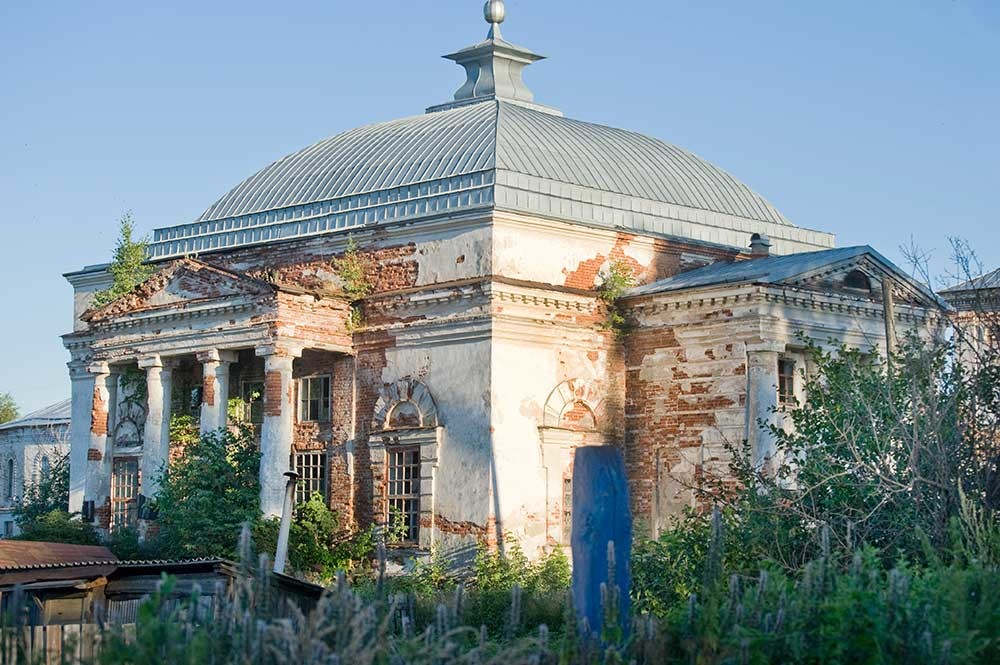 Just over a decade after Prince Yury’s vision, the settlement suffered from the Mongol invasion in the winter of 1237-38—the same catastrophe that led to Yury’s death during the Battle on the Seet River (March 4, 1238). The town revived under the authority of regional princes, and in 1452 it was absorbed into the holdings of Basil II (the Blind), grand prince of Moscow. During this period, Yurevets was frequently attacked by Tatar raiders from the south, a threat eliminated in 1552 with Ivan the Terrible’s conquest of Kazan. As a favor, Ivan briefly granted the town to a Tatar prince named from Astrakhan. 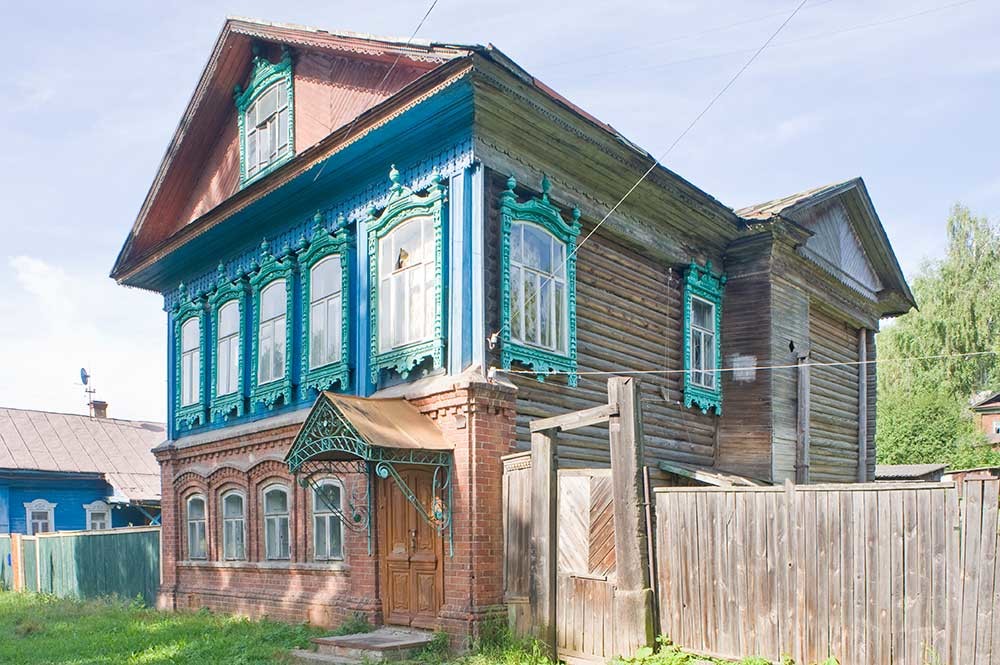 In the early 17th century, a dynastic interregnum known as the Time of Troubles led to widespread disorder in the region. Yurevets enlisted a people’s army led by local nobleman Fyodor Grigorevich Krasny, who in 1613 witnessed the enthronement of Michael Romanov, first tsar of the Romanov dynasty.

In the mid 17th century, Yurevets, like many other Volga towns, was consumed by a schism within the Orthodox Church. For a short period in 1651, the town’s primary priest was Avvakum Petrov (1620-82), who later acquired enduring fame as the spiritual leader of schismatics called Old Believers. (They refused to accept liturgical reforms promulgated by Patriarch Nikon in the 1650s.) Avvakum was uncompromising in his interpretation of proper behavior, and after several weeks of confrontation with parishioners, he abandoned Yurevets for Moscow. 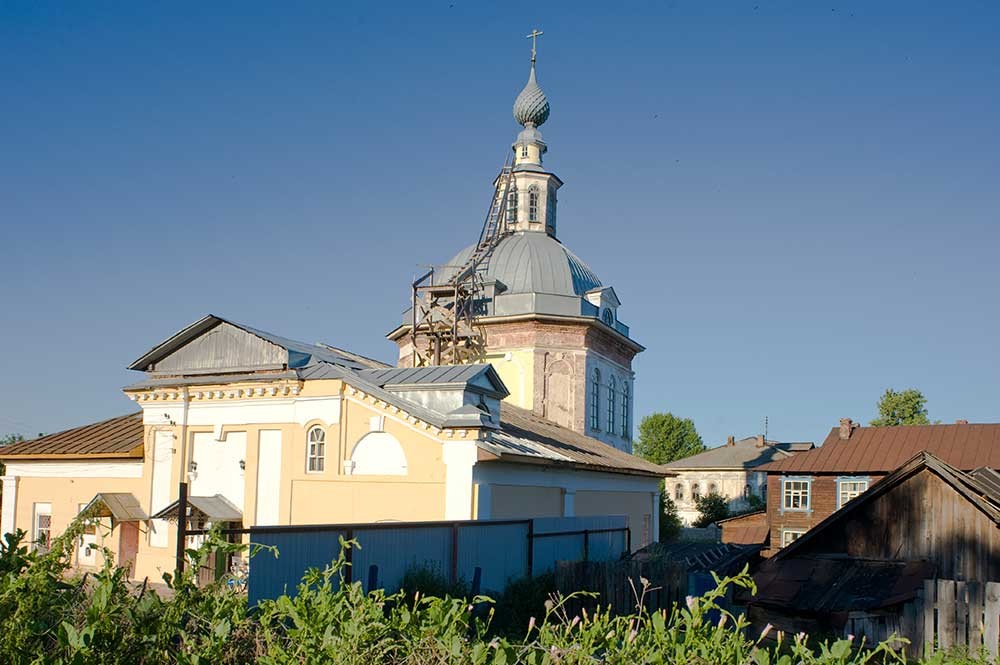 its geographical position opposite the mouth of the Unzha River, Yurevets was overshadowed in the 19th century by other river towns such as Nizhny Novgorod, some 118 miles to the south. Nonetheless, the Volga provided a transportation artery that was utilized by local entrepreneurs such as Alexander Mindovsky, a peasant who purchased his freedom in 1820 and became a textile magnate. In the 1870s, he formed the Yurevets Linen Factory, whose brick buildings are dimly visible in a Prokudin-Gorsky photograph. The Mindovsky family thereafter acquired prominence in Moscow and built imposing mansions that survive to this day 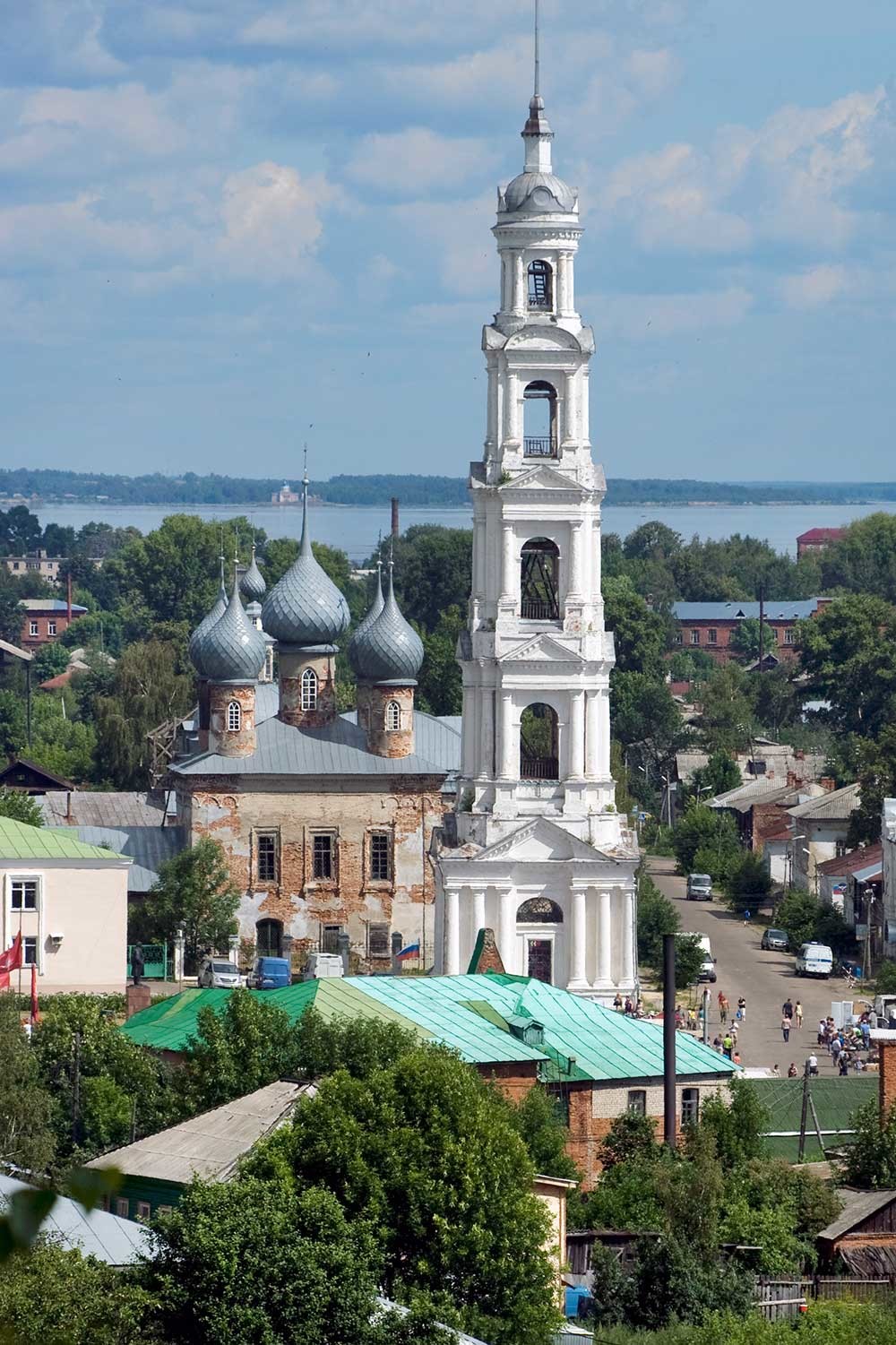 prosperity of Yurevets was reflected in church construction that included a central complex formed by the Cathedrals of the Entry into Jerusalem (early 18th century) and the Dormition, completed in the mid-19th century. The Jerusalem Cathedral is especially picturesque with its crown of soaring cupolas in the Yaroslavl style. Nearby is one of the Volga River’s tallest bell towers. The five-tiered structure was built in the mid-19th century and contains a small church dedicated to St. George—an evocation of the town’s first shrine, founded by Prince Yury.

Prokudin‑Gorsky photographed the cathedral ensemble from the east near the river’s edge, with stacks of firewood along the flat shore. Although the cathedrals were severely damaged during the Soviet period, the bell tower has remained the town’s dominant landmark, as my photographs from July 2012 dramatically show 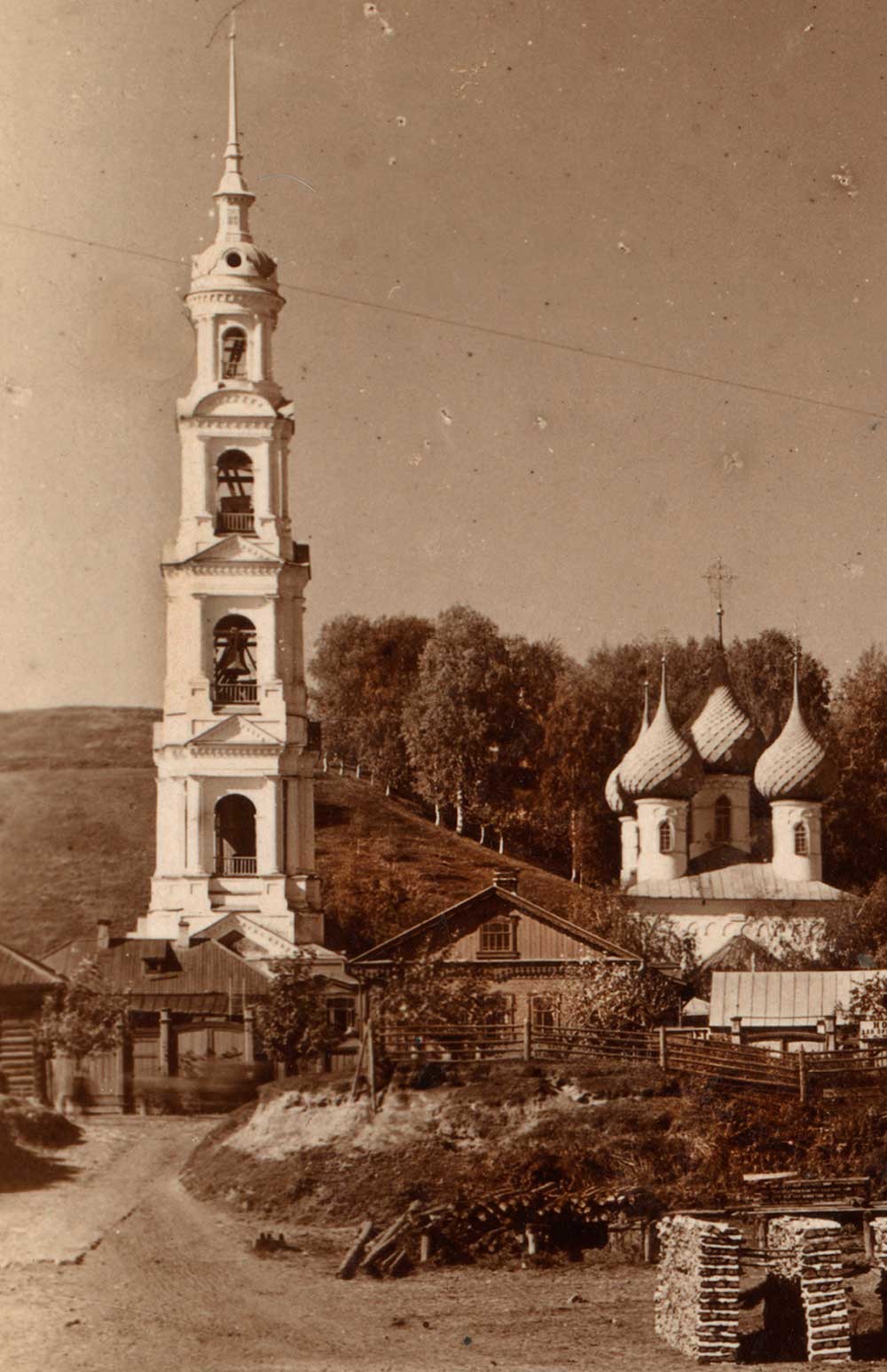 broader view from a bluff just south of town shows the low-lying area that was submerged by the post-war transformation of the Volga. My photographs from the same vantage point reveal losses, but also much that has been preserved. The Prokudin-Gorsky perspective conveys the sense of a quieter era before and revolutionary change 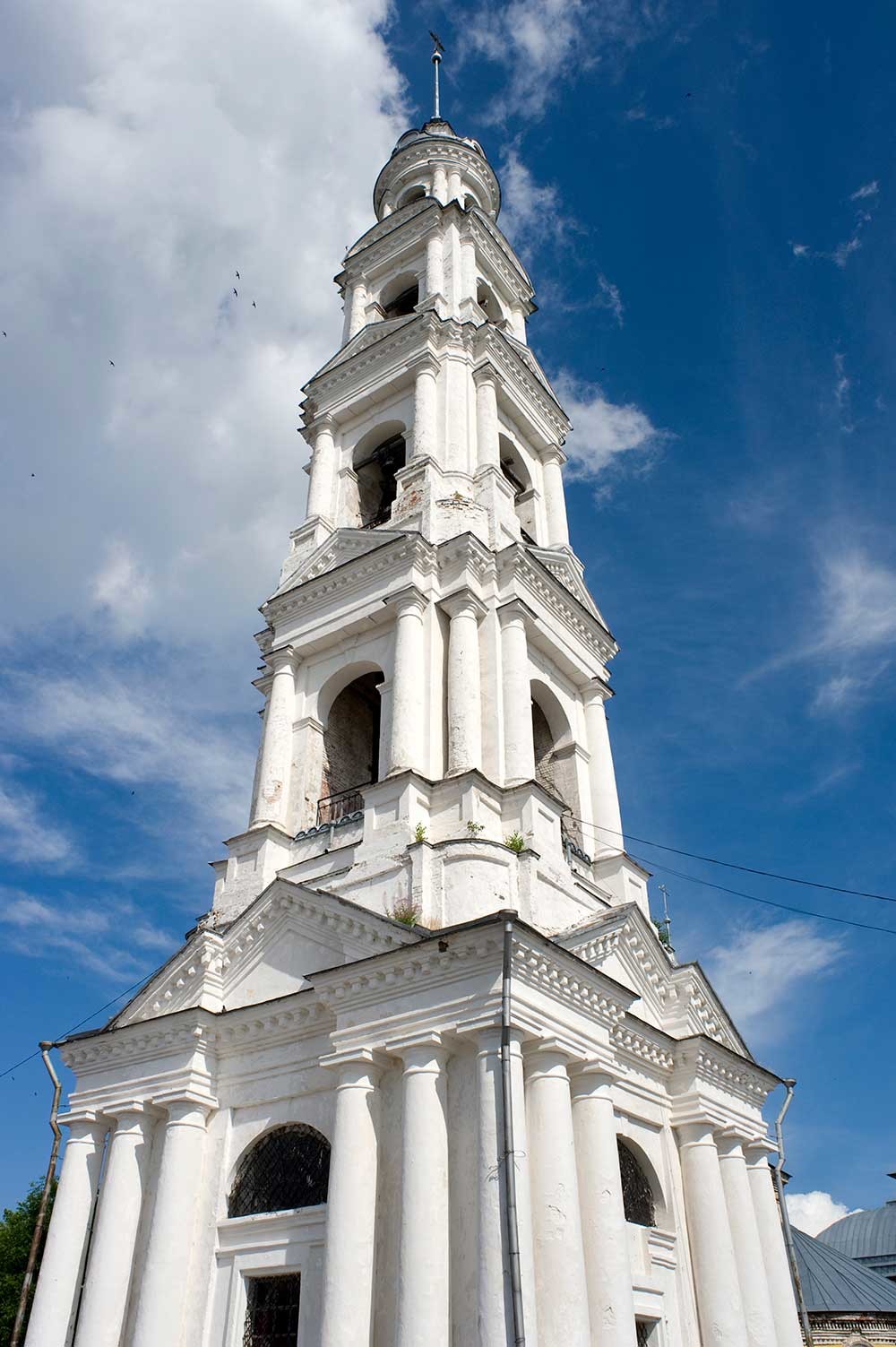