Russia’s most beautiful church: The Resurrection Cathedral at Borisoglebsk 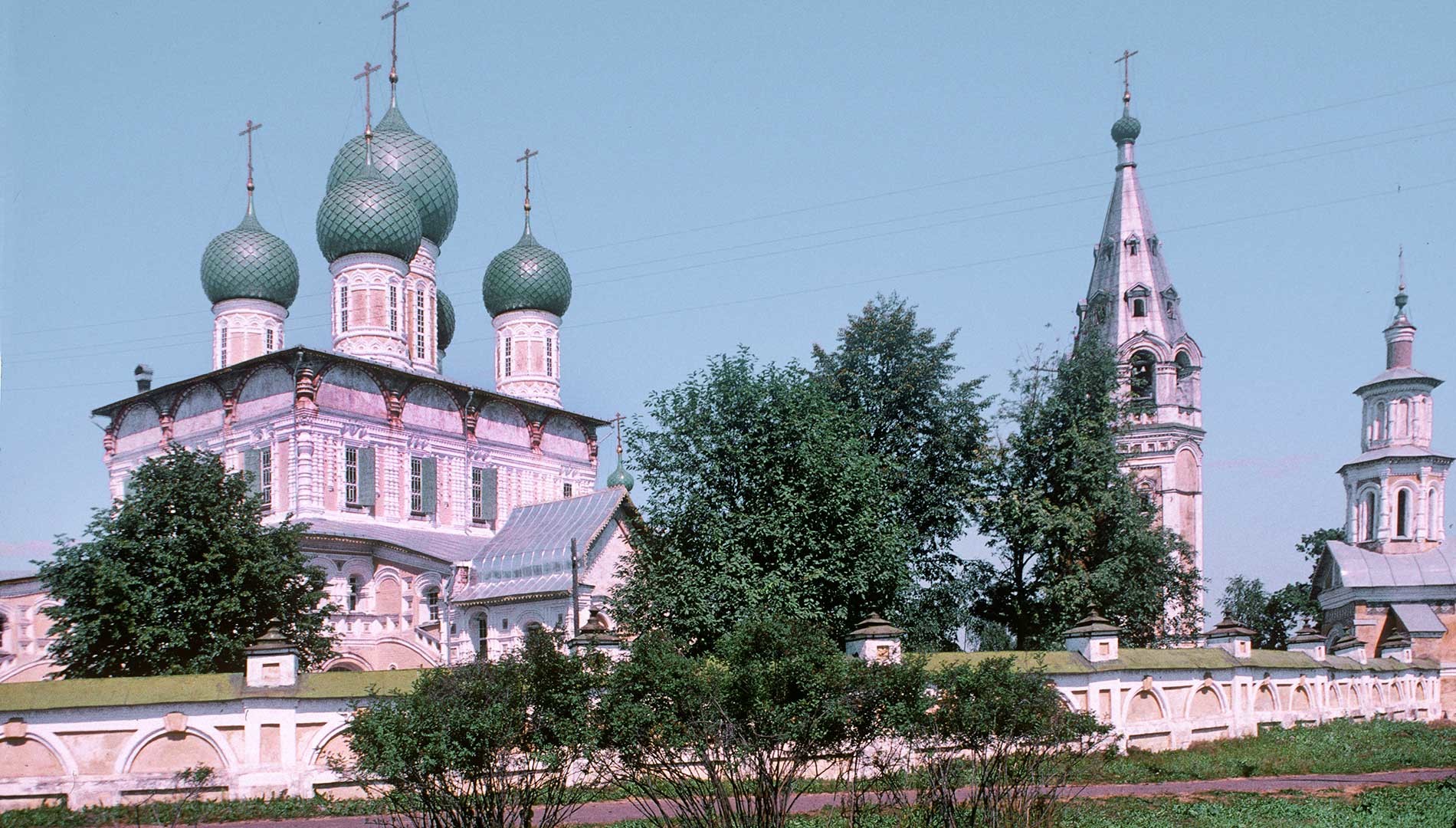 At the beginning of the 20th century, the Russian chemist and photographer Sergei Prokudin-Gorsky devised a complex process for vivid, detailed color photography. His vision of photography as a form of education and enlightenment was demonstrated with special clarity through his photographs of architectural monuments in historic sites throughout the Russian heartland 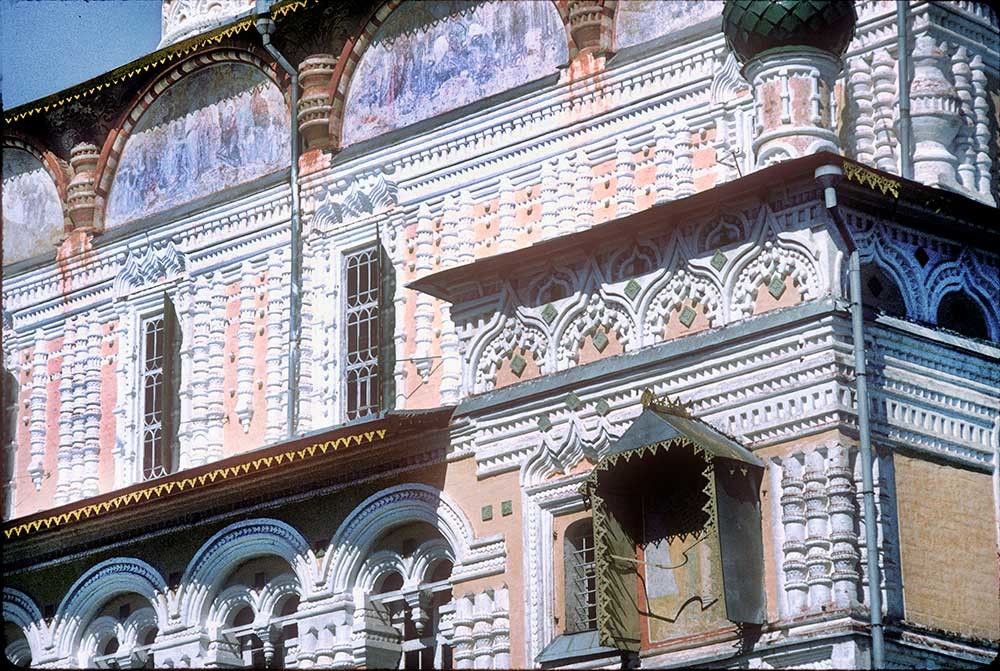 support for his project came from the Ministry of Transportation, which facilitated his photography on Russia’s waterways and expanding rail network. His trips along the Volga, the country’s greatest river, proved especially productive.

Among the many river towns that he visited in the summer of 1910, one of the most picturesque is now known as Tutaev, located some 25 miles northwest of the city of Yaroslavl. Tutaev (population around 40,000) is, in fact, two places, situated opposite each other on the Volga 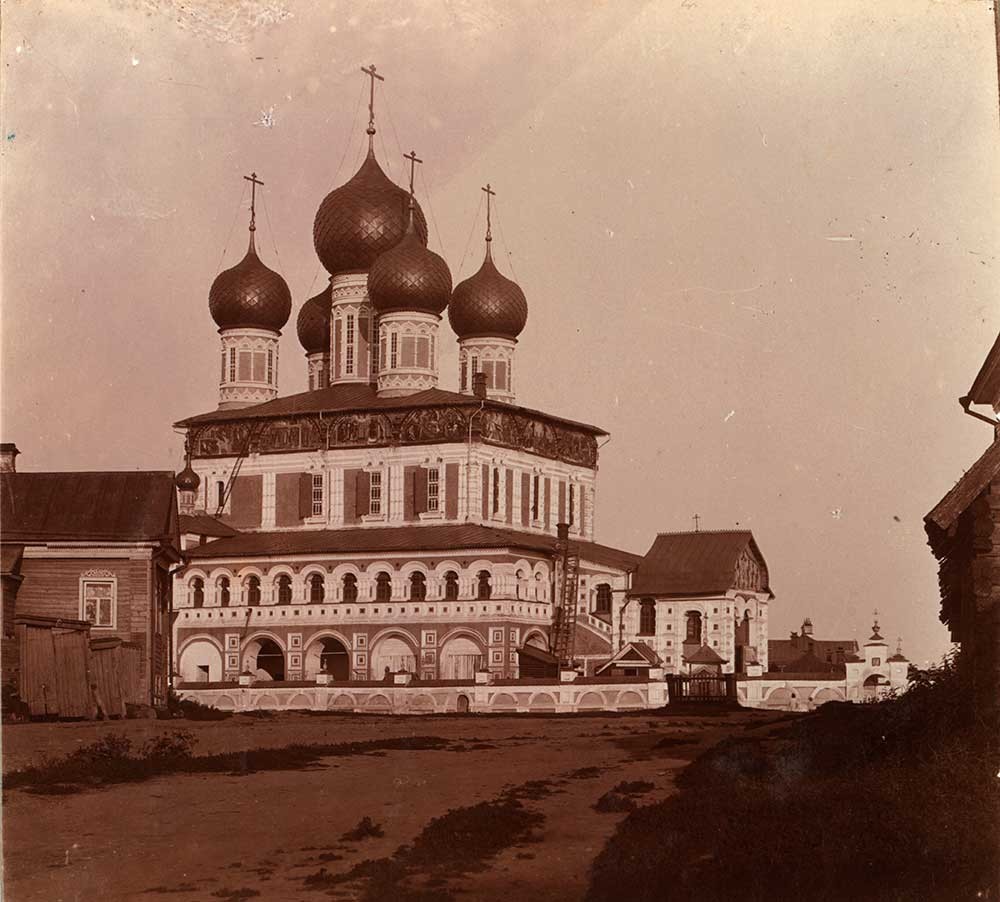 1822, each settlement had its own name: on the right bank, Borisoglebsk and on the left--Romanov. In 1822, the names were unified to Romanov-Borisoglebsk. The name Tutaev was adopted in 1918 to honor a Red Army soldier killed during the struggle with a rebellion against Bolshevik power in nearby Yaroslavl. (Attempts to return the pre-revolutionary name have not been implemented.)

The origins of Borisoglebsk evidently predate the Mongol sack of Yaroslavl in 1238. Its name derives from a local church dedicated to two early saints, Princes Boris and Gleb, martyred during a Kievan dynastic struggle in the early 11th century.   By the 15th century, the settlement was referred to as the Borisoglebsk Fishing Quarter (). In 1777, during Catherine the Great’s administrative reforms of the Russian provinces, the settlement became formally known as Borisoglebsk 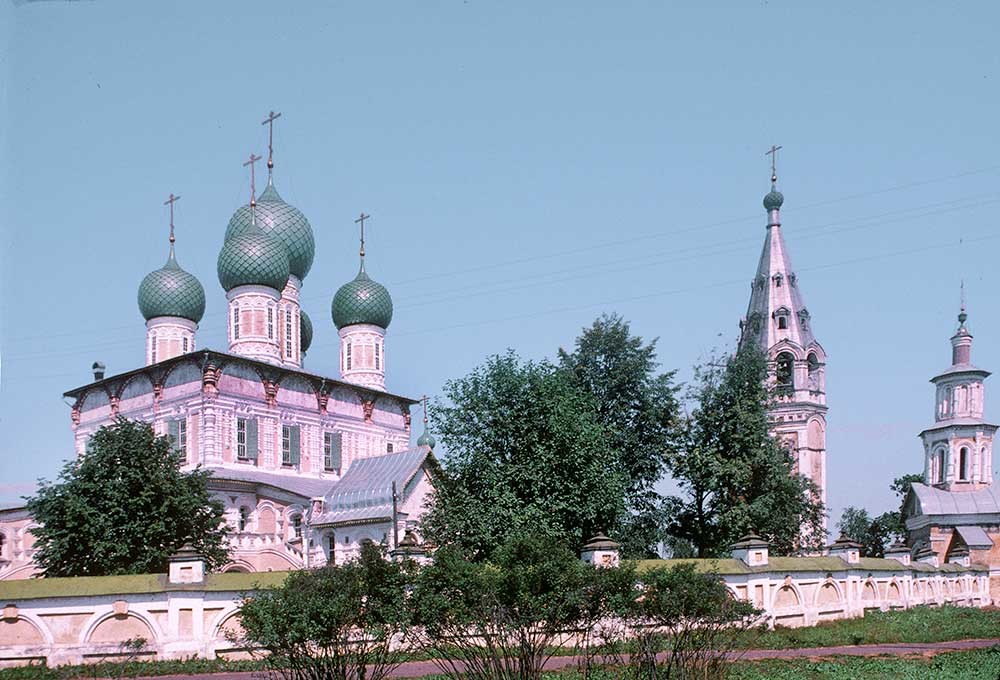 sacked in the early 17th century during the dynastic crisis known as the Time of Troubles, Borisoglebsk prospered from Volga trade during the latter half of the 17th century, Yet this was also the time of a profound spiritual and political crisis stemming from a schism in the Orthodox Church that originated in the 1660s. The dissenters, known as Old Believers, had a large presence in the Borisoglebsk area, and the official church wished to make an architectural statement that proclaimed the glory of official Orthodoxy.

This combination of prosperity and religious motives led to the construction of the magnificent Cathedral of the Resurrection. The complex structure had its origins in a brick church built in 1652 on the site of wooden Church of Sts. Boris and Gleb and dedicated to the revered Smolensk Icon of the Virgin (also known as the Hodegetria Icon). 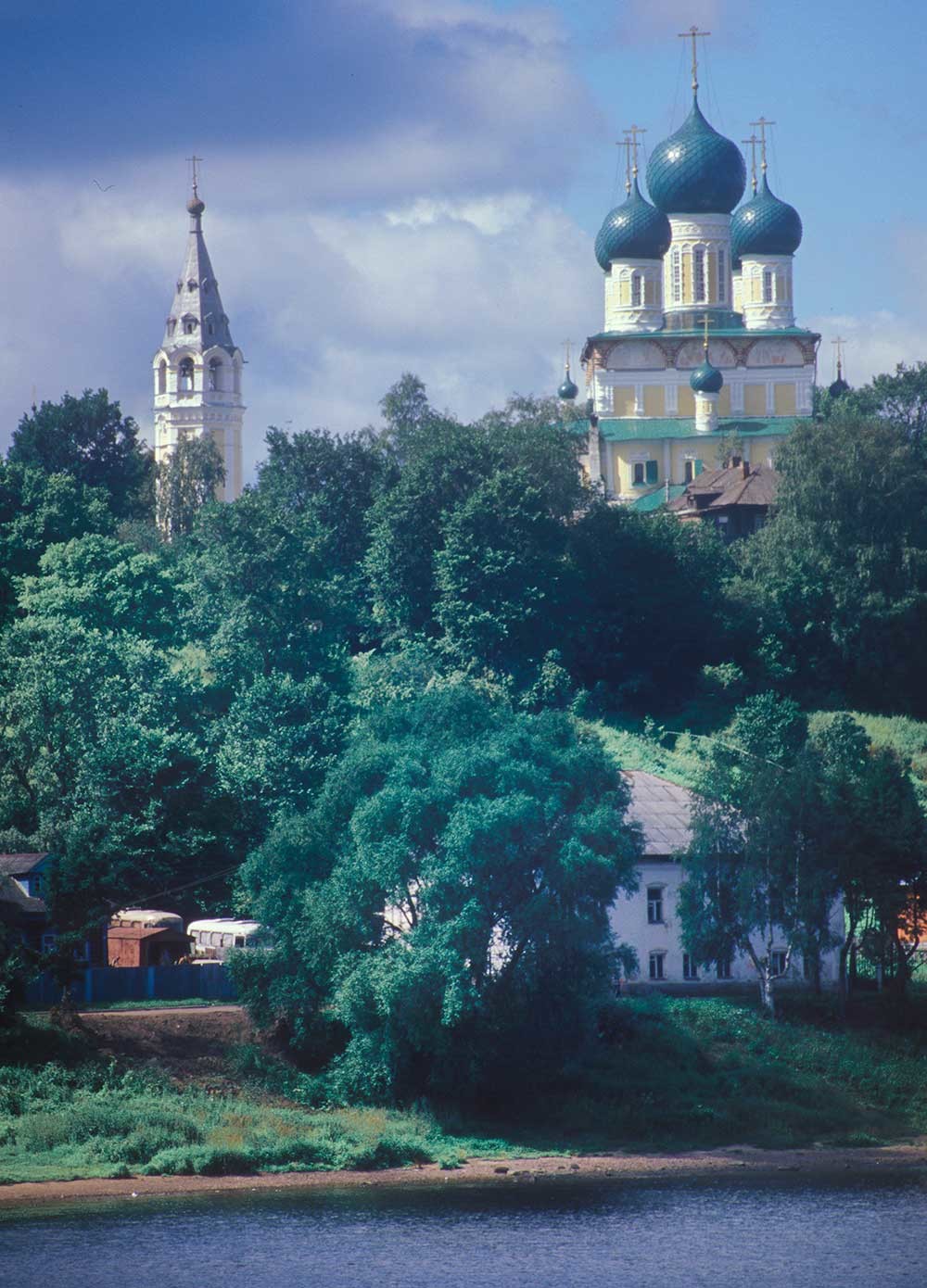 This lower level served for worship while the rebuilding was underway. It had secondary altars dedicated to John the Baptist (in the north) and St. Charalambos of Magnesia, martyred apparently during the reign of Septimius Severus (193-211). After construction of the entire complex was completed toward the end of the decade, the lower level continued to be used for winter services because could be more easily heated. The upper level--known as a “summer” (i.e. unheated) church—contained the main altar, dedicated to the Resurrection of Christ, and a secondary altar to Sts. Boris and Gleb in remembrance of the preceding wooden church.

With its completion in 1678, the Resurrection Cathedral became a proud, graceful landmark overlooking the Volga. My photograph from the river in 2007 shows that even with summer foliage the cathedral and its lofty cupolas are clearly visible 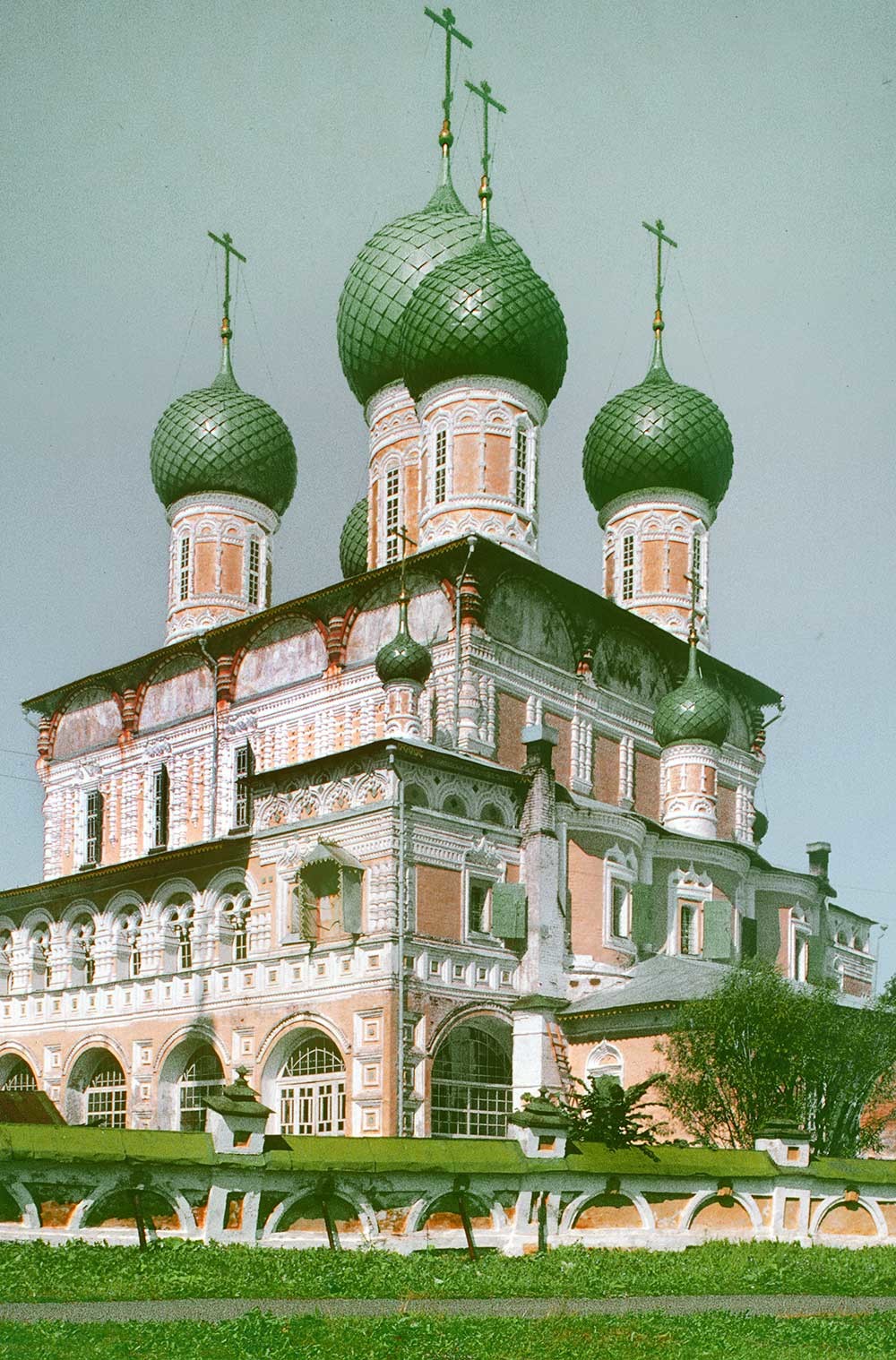 its design, the cathedral reflects and expands on late 17th-century decorative styles associated with Rostov and Yaroslavl. Indeed, the cathedral was built with the patronage of Rostov Metropolitan Jonah Sysoevich (ca. 1607-90), whose largesse led to a flourishing of church architecture throughout the region in the late 17th century.

The basic structure, square in plan, rises in a pattern formed by large windows separated with groups of attached ornamental columns painted white on a yellow stuccoed surface. Beneath the roof cornice semicircular ornamental gables filled with paintings primarily connected with the life of Christ 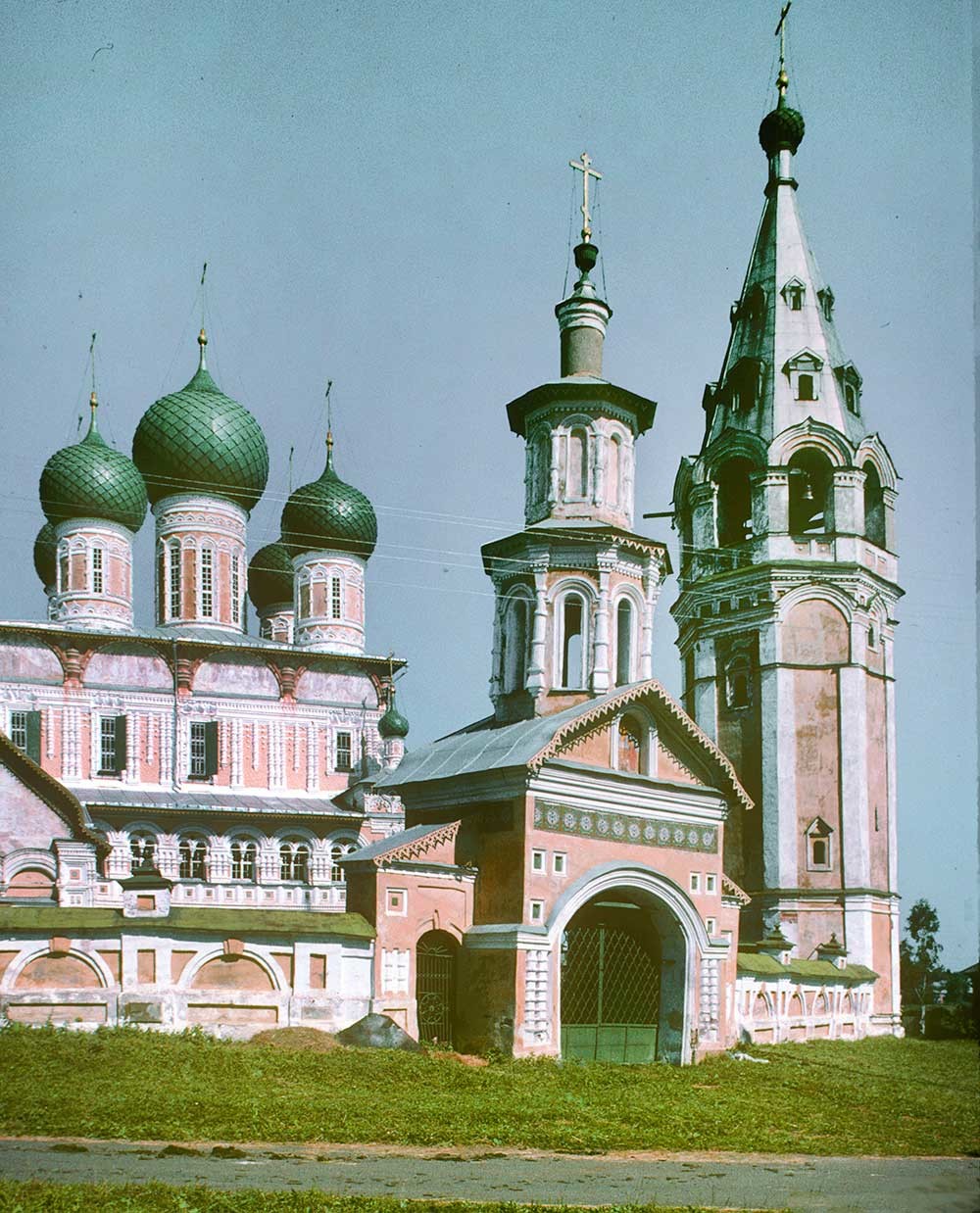 metal roof is crowned in the traditional manner with five onion domes composed of metal shingles painted dark green. The pinnacle of each dome supports a tall gilded cross, with the central dome the highest. The cupolas rest on elevated cylinders (“drums”) that richly echo the decorative pattern of the stuccoed walls below. In typical Yaroslavl manner, the height of drums, cupolas crosses equals that of the main structure on which they rest 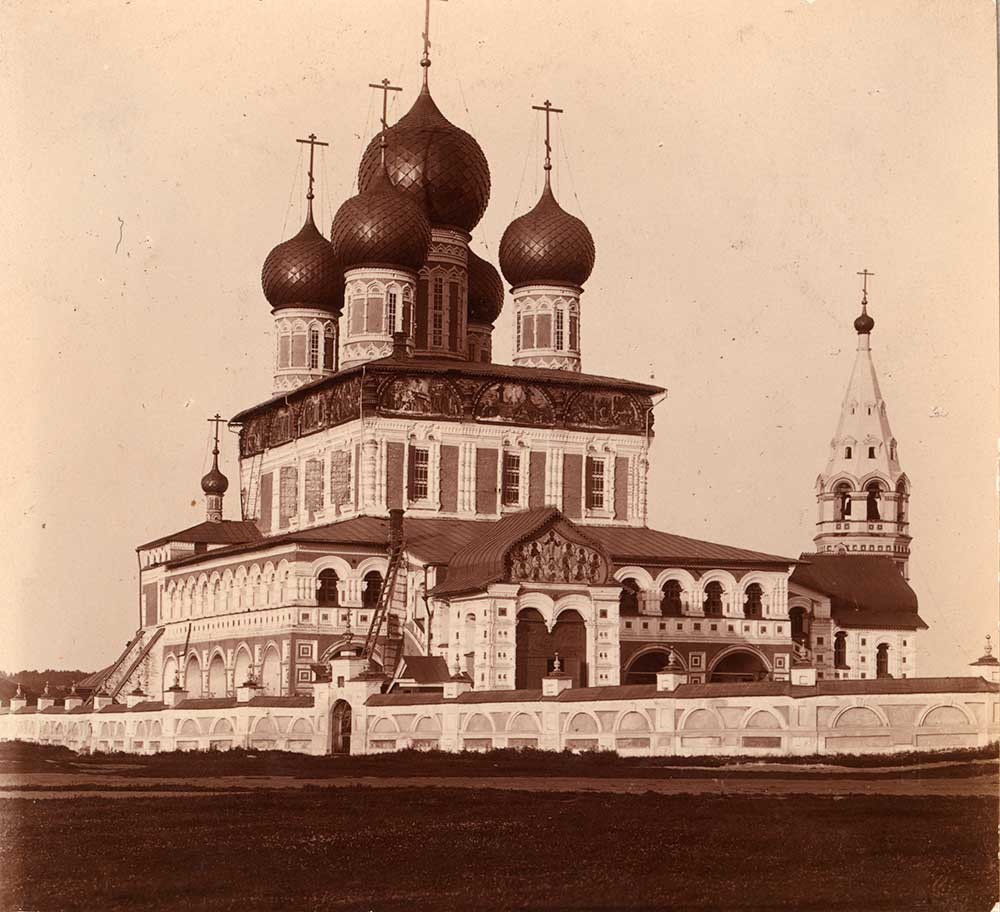 all their ornamental flourishes, the walls of the main structure are surpassed by the galleries attached on the north, west and south facades. The space between the arcaded gallery windows is filled with recessed decorative squares (), many of which contain ceramic tiles. At the east end of the north and south galleries are chapels dedicated to Sts. Peter and Paul (north) and to St. Nicholas 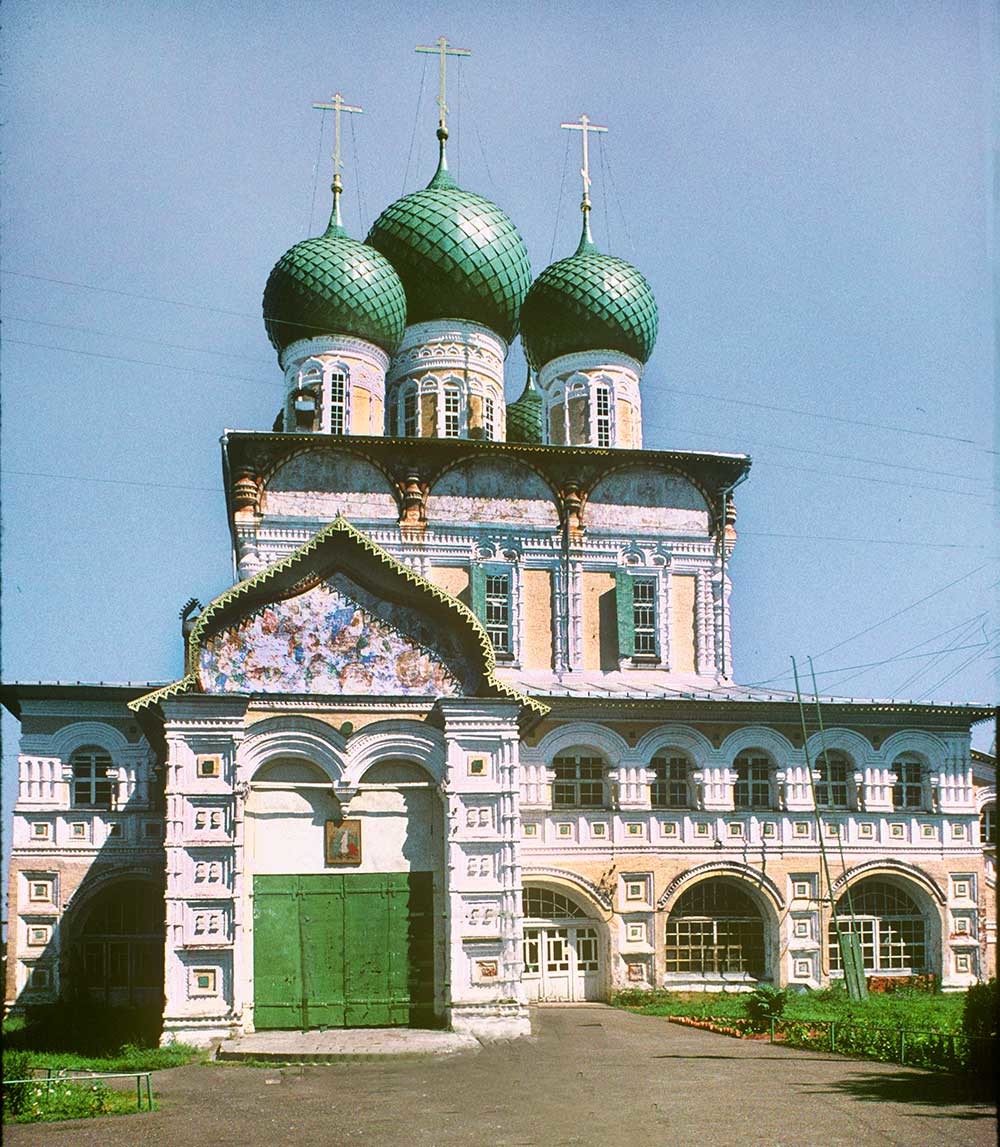 festive elevated galleries are connected to the ground level on the west and south by stairways that descend to porches that are elaborately decorated even in comparison with the rest of this ornate church. The ground level is marked by large arches that emphasize the masonry support for the upper structure. On the south side, the cathedral compound includes a Holy Gate facing the main square and a bell tower with a distinctive “tent” tower erected at the end of the 17th century.

This grand edifice, with its intricate façade ornamentation, was photographed by Prokudin-Gorsky in 1910 from both the north and the west. Unfortunately, his collection at the Library of Congress contains none of his glass plate negatives of the Tutaev monuments 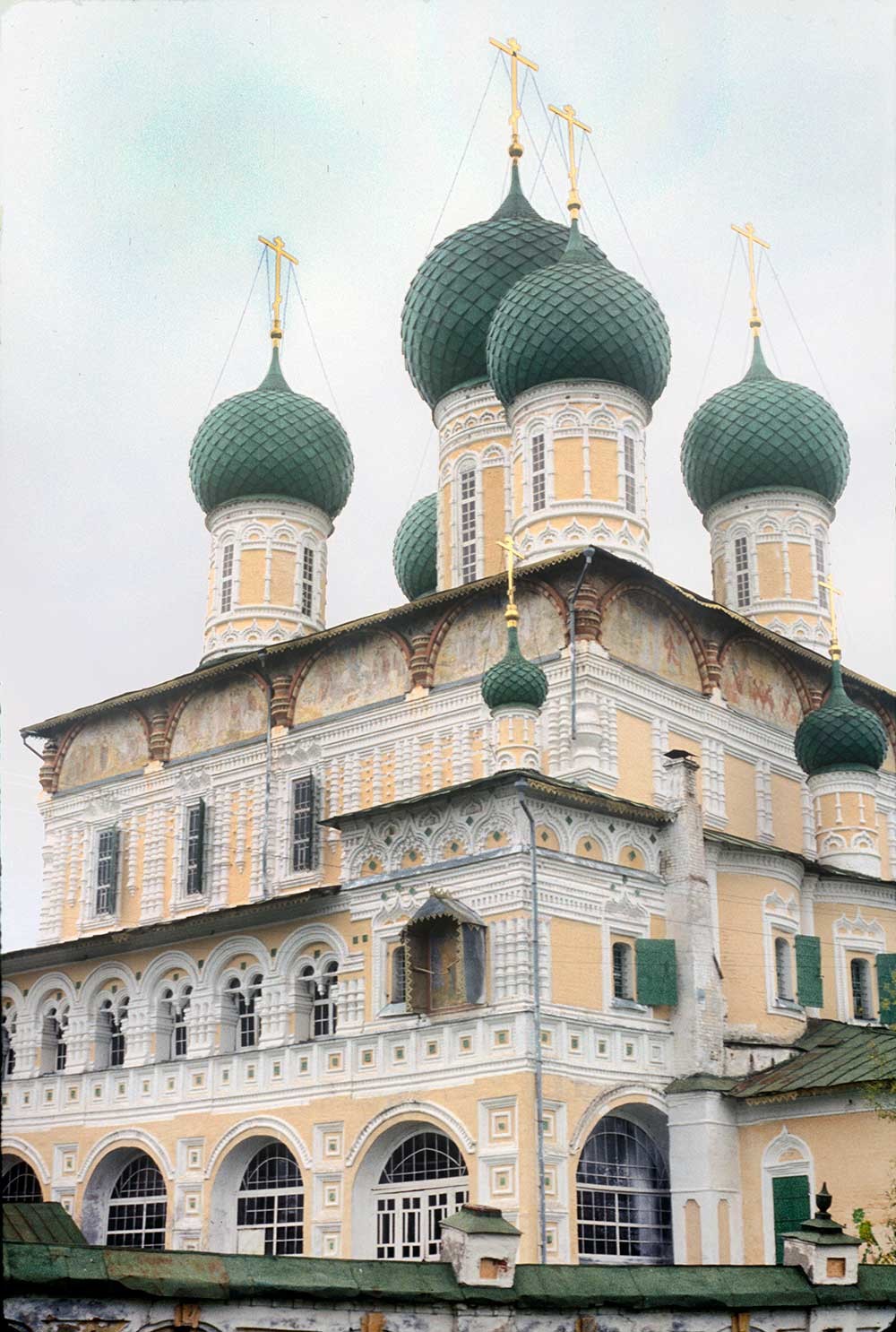 fate of Prokudin-Gorsky’s original plates is unknown. They were perhaps broken as the collection passed through a variety of hands during years of war and revolution. However, Prokudin-Gorsky made contact prints from the magenta segment of his 3-exposure negatives, and these monochrome prints provide invaluable information about the state of preservation of the Resurrection Cathedral 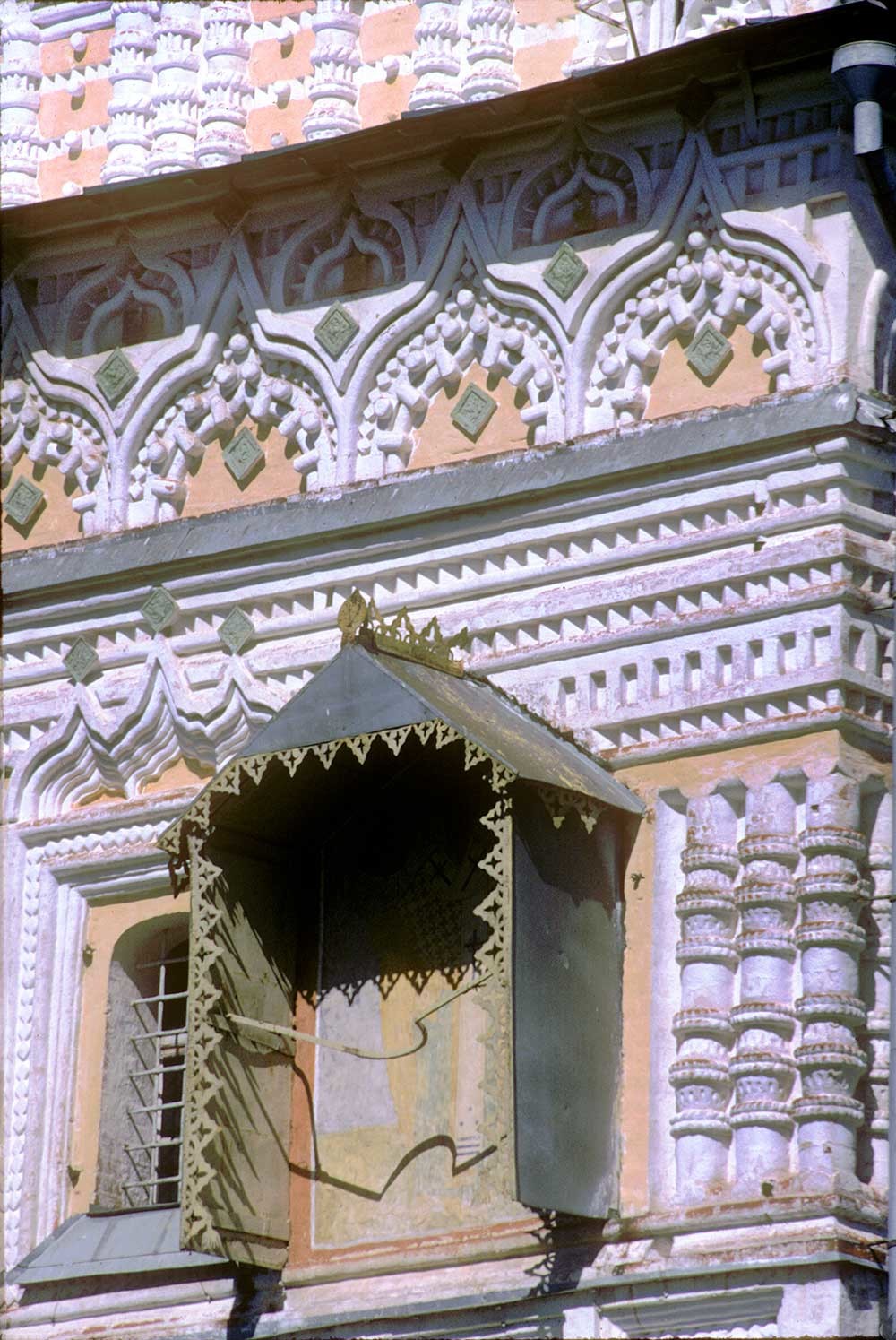 photographs from the north and west in 1992 and 1997 show little change, a testament to its miraculous preservation in the Soviet era, when the parish continued to exist even during the worst years of repression. Although many of its were killed or died in exile in the 1930s, parishioners resolutely protected the sacred monument with unflagging presence and devotion. Scholars also helped with studies of its unique aesthetic value 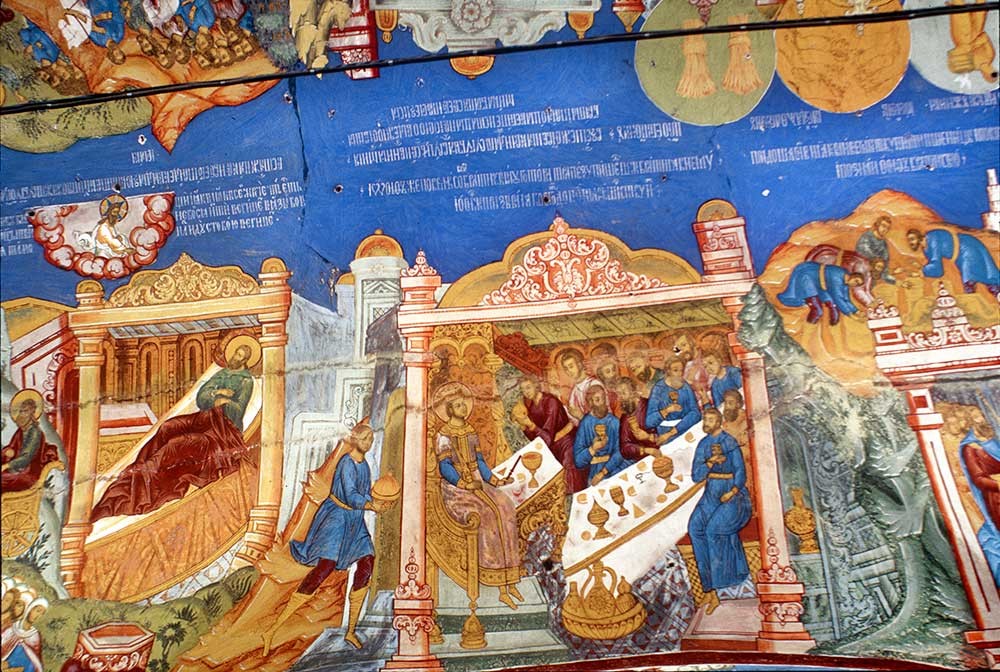 Cathedral of the Resurrection. North gallery, ceiling frescoes from Book of Genesis (Jacob & his sons). July 25, 1997

have no record that Prokudin-Gorsky photographed the cathedral interior, although it contains some of the best examples of late 17th-century wall painting of any church along the Volga, including Yaroslavl itself. The interiors of the “summer church” and gallery were painted soon after construction, in 1679-80, by Yaroslavl master icon painters Dmitry Plekhanov and Fedor Karpov.

Having survived relatively intact from the Soviet period, the Resurrection Cathedral is reputed to have miraculous healing powers by locals as well as pilgrims. The joy of beholding the landmark’s surpassing beauty has, perhaps, a therapeutic value for all. 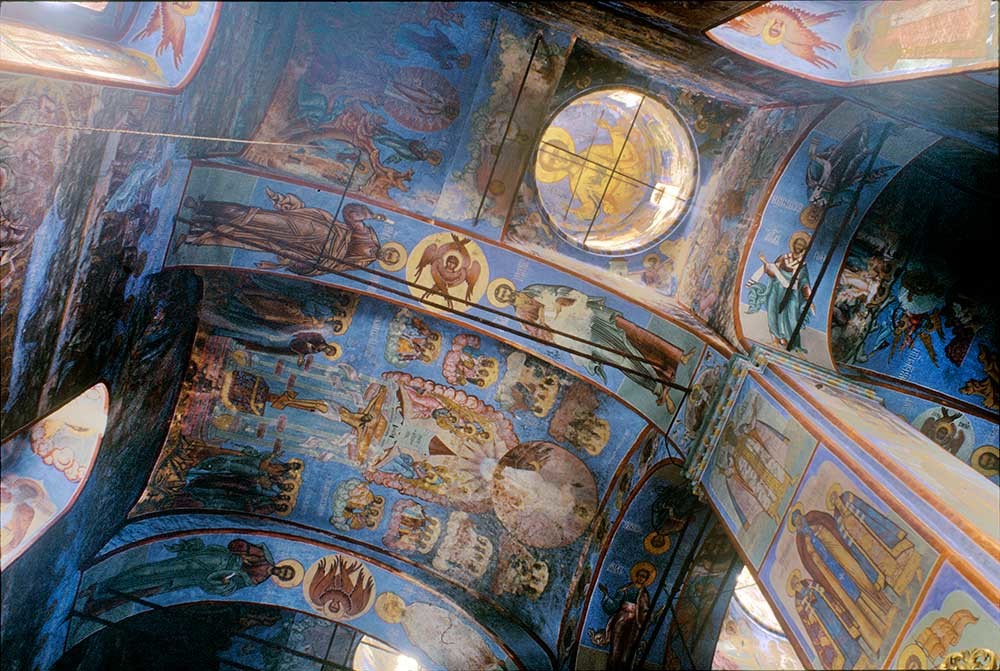 Cathedral of the Resurrection. Frescoes on west ceiling vault and piers. July 25, 1997