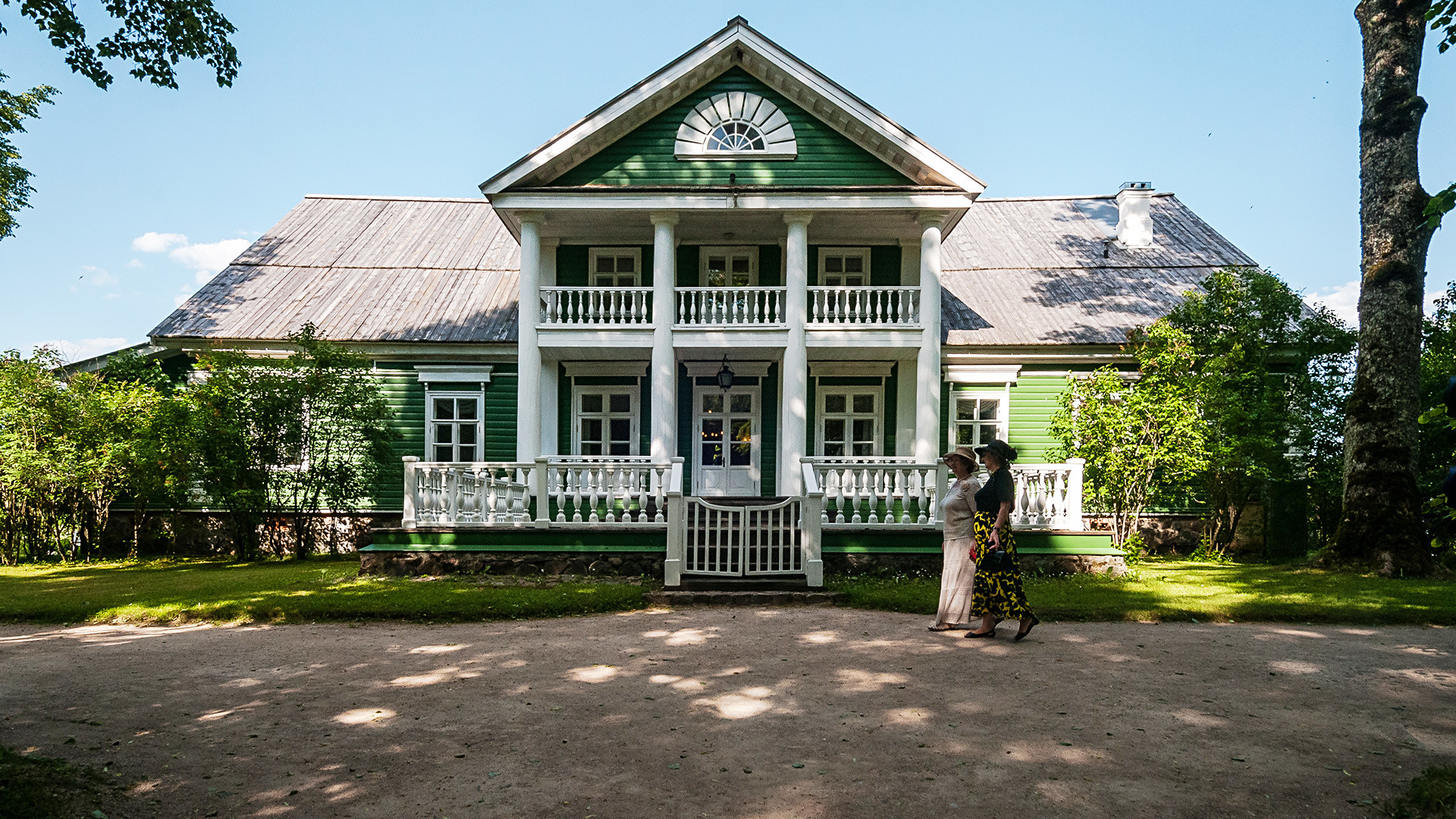 Vadim Razumov
There are several places in Pskov Region, western Russia, that played a special role in the life of Alexander Pushkin.

Many cities in Russia cherish the fact that Alexander Pushkin passed through them at one point - every house where the poet may have had a cup of tea has a memorial plaque on it. But Pskov Region boasts a place where every path, every tree and every meadow the poet came across is celebrated. 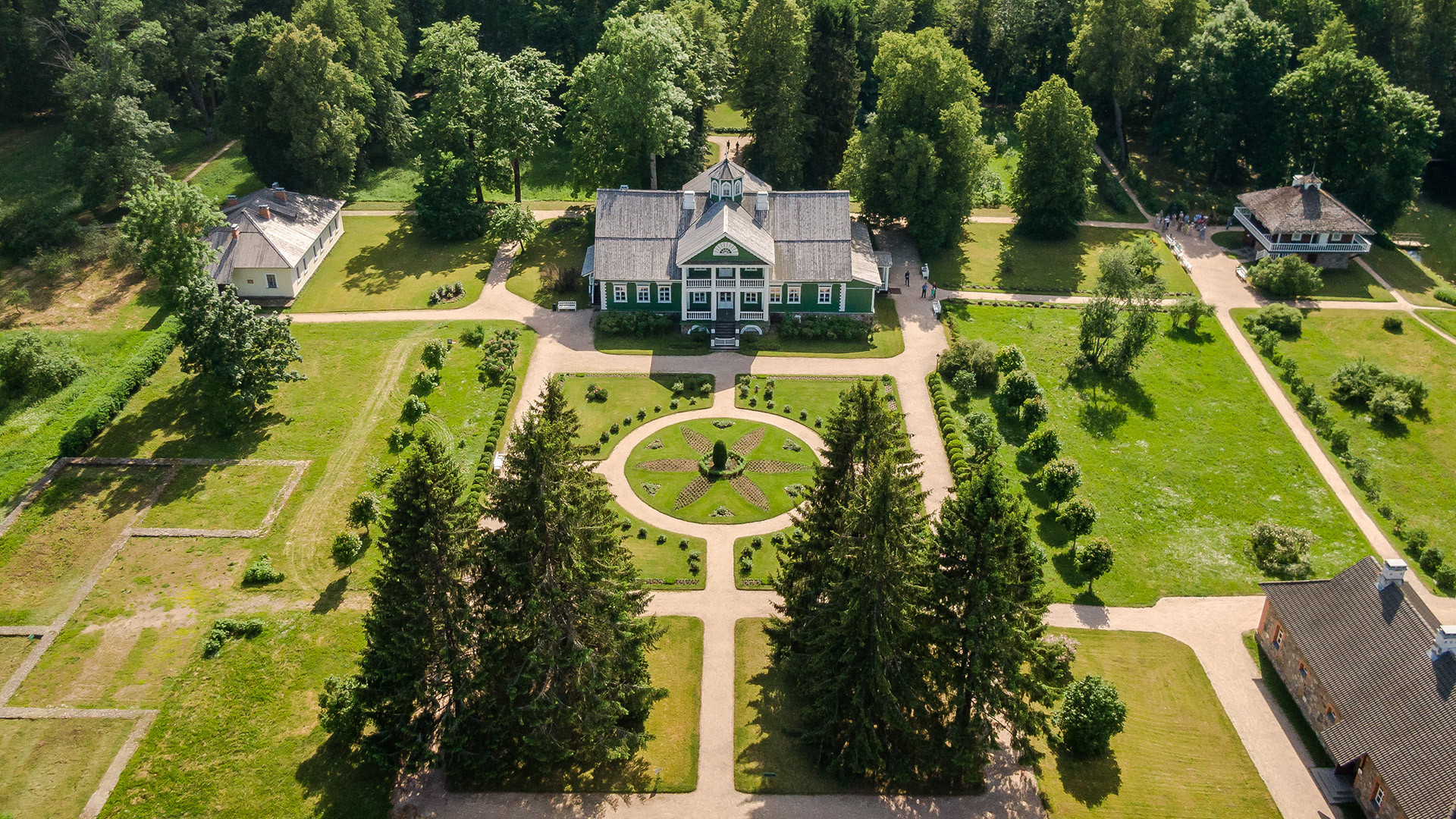 That place is known as Pushkin Hills, a museum that comprises of three country estates - Mikhailovskoye, Petrovskoye and Trigorskoye. 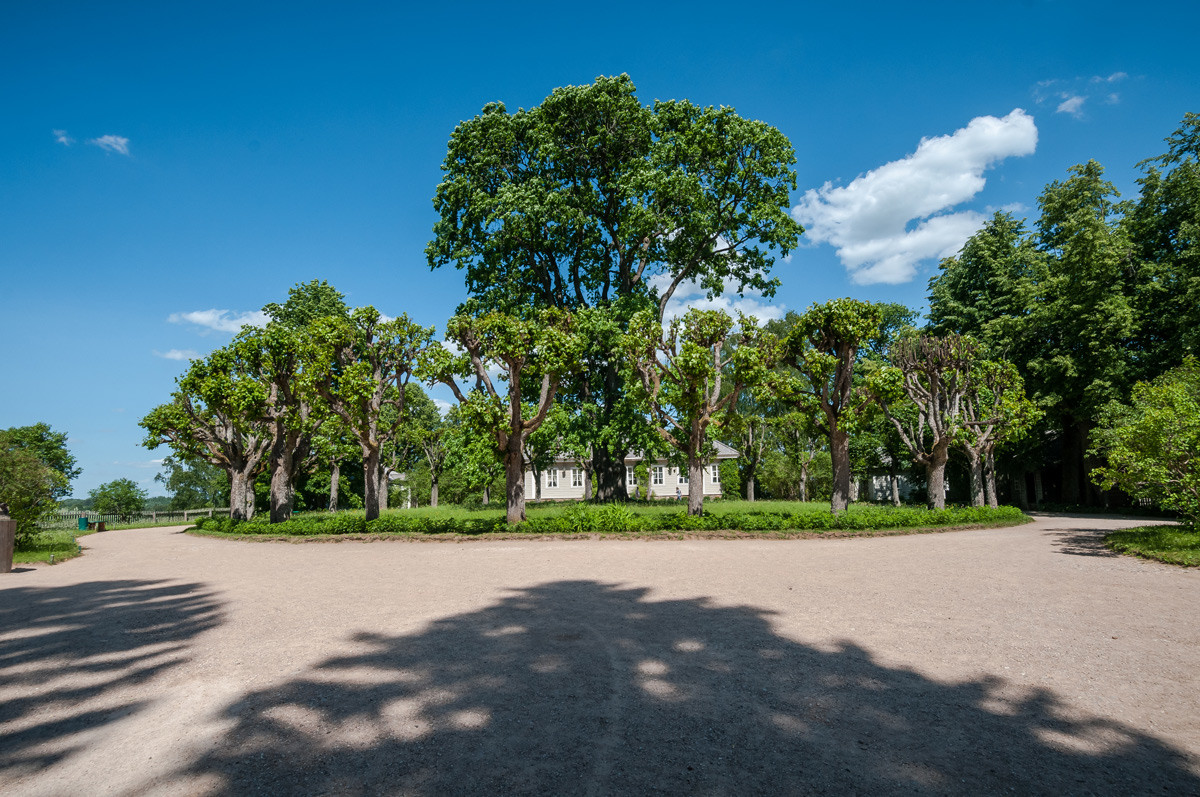 Pushkin's connection with Mikhailovskoye was the strongest. The first owner of the estate was his great-grandfather, Abram Gannibal, the first black citizen of the Russian Empire, an associate, friend and godson of Peter the Great. Later, the estate was inherited by Pushkin's grandfather, Osip. It was under him that the present manor house was built, together with a park and its alleys, reflection pools and bridges. In 1818, the poet's mother, Nadezhda Ossipovna Gannibal, became the mistress here. 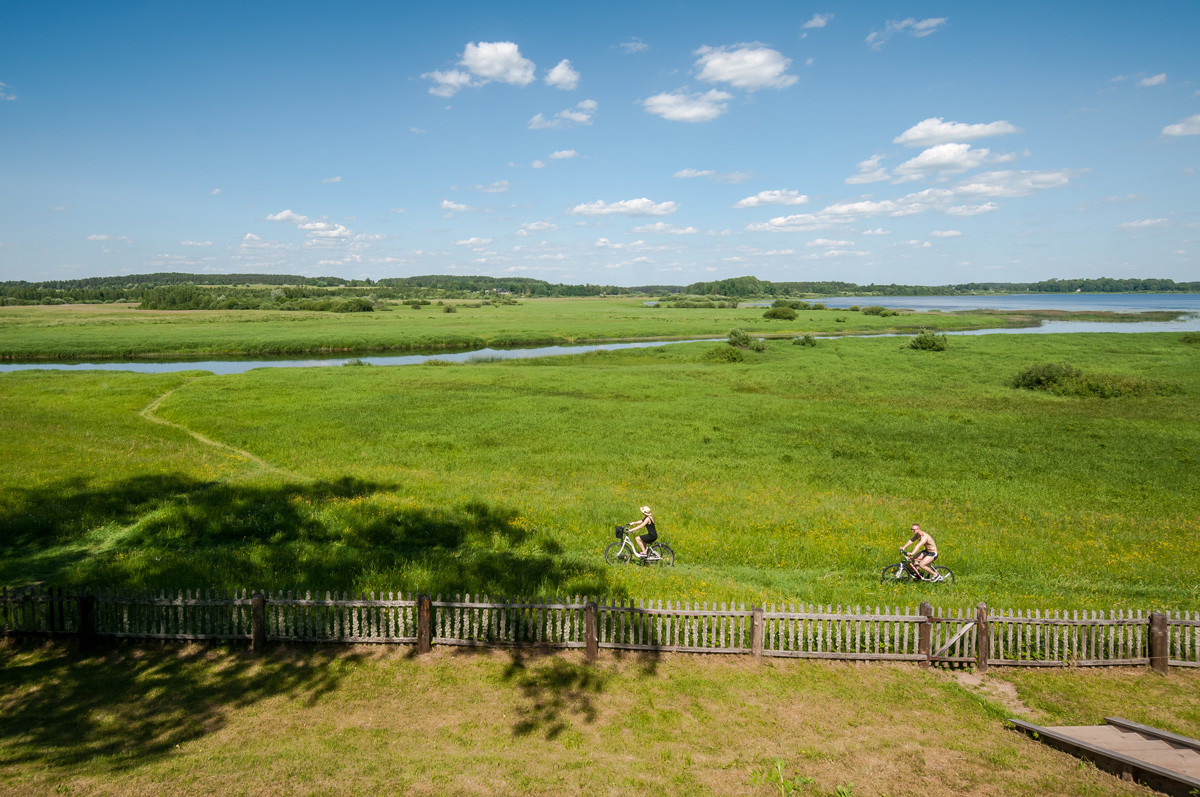 "I own a color postcard titles The Pskov Expanse. And now I'm here I want to know - is that the expanse?" (Sergei Dovlatov "Pushkin Hills")

Many of Pushkin's works were written here, including the poem Boris Godunov and most of his novel in verse, Eugene Onegin, written in 1824-26, when the poet was exiled to his country estate as punishment for his freethinking poetry. 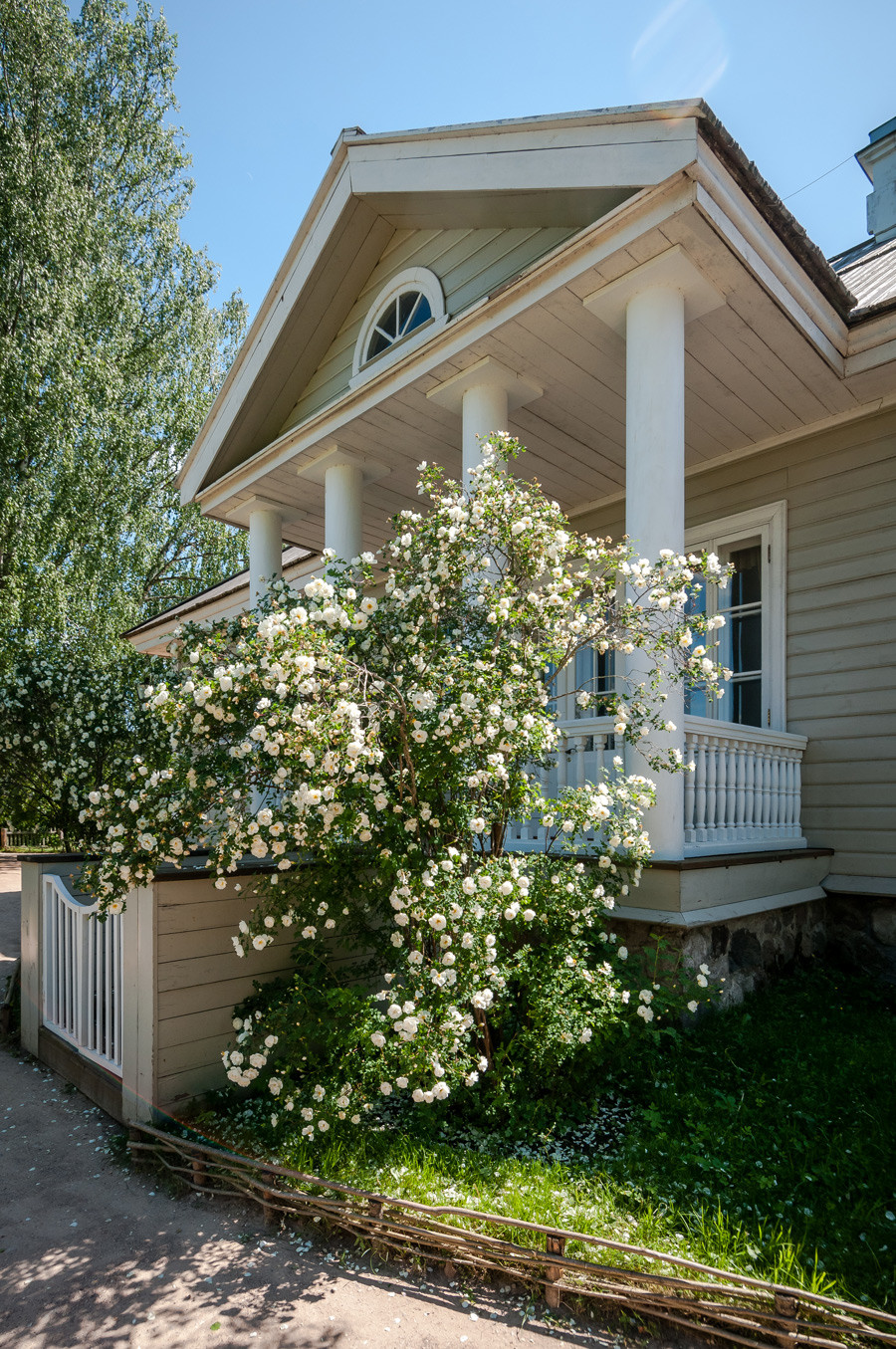 That period in Pushkin's life is considered especially important for his work: it was here, at Mikhailovskoye, that his writing style began to shift from romanticism to realism. 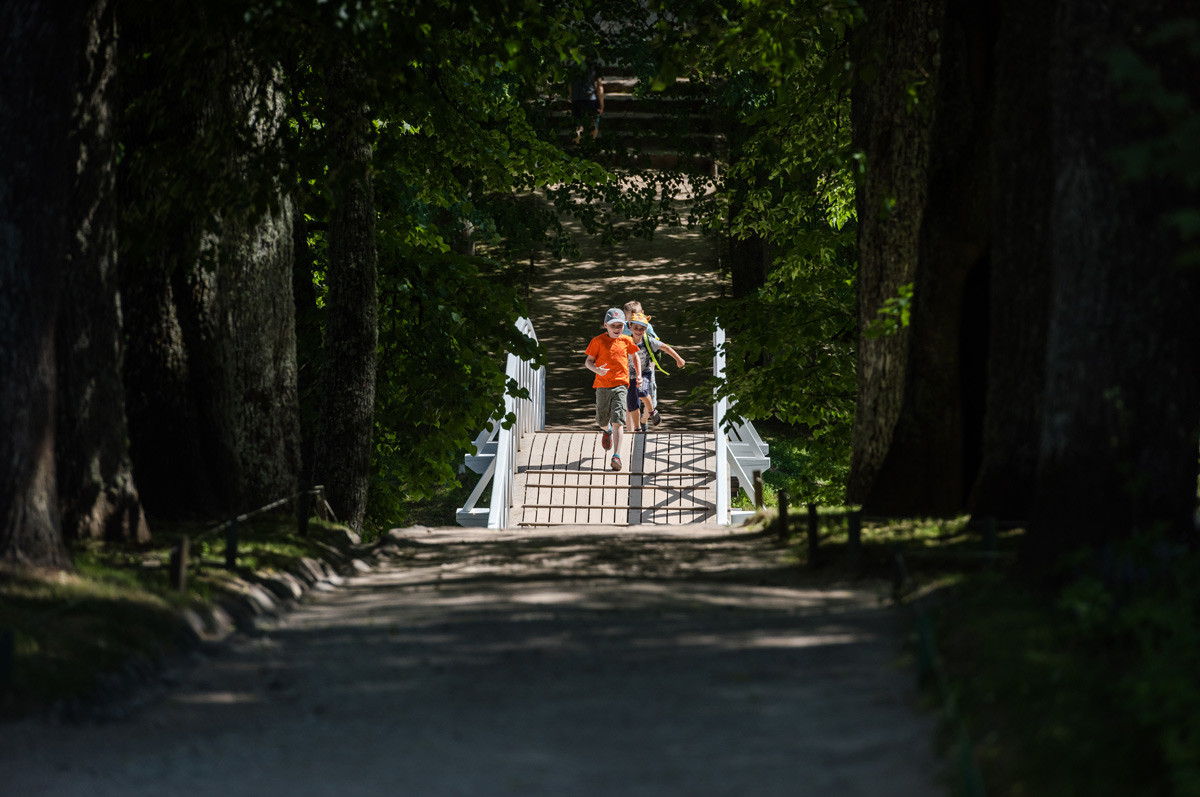 And it was in 1825, in neighboring Trigorskoye, where he would once again meet Anna Kern, dedicating to her one of his most famous poems, “I remember that wondrous moment”. Their affair took place later in St. Petersburg, but the estate still has a romantic alley of old linden trees named after Kern. 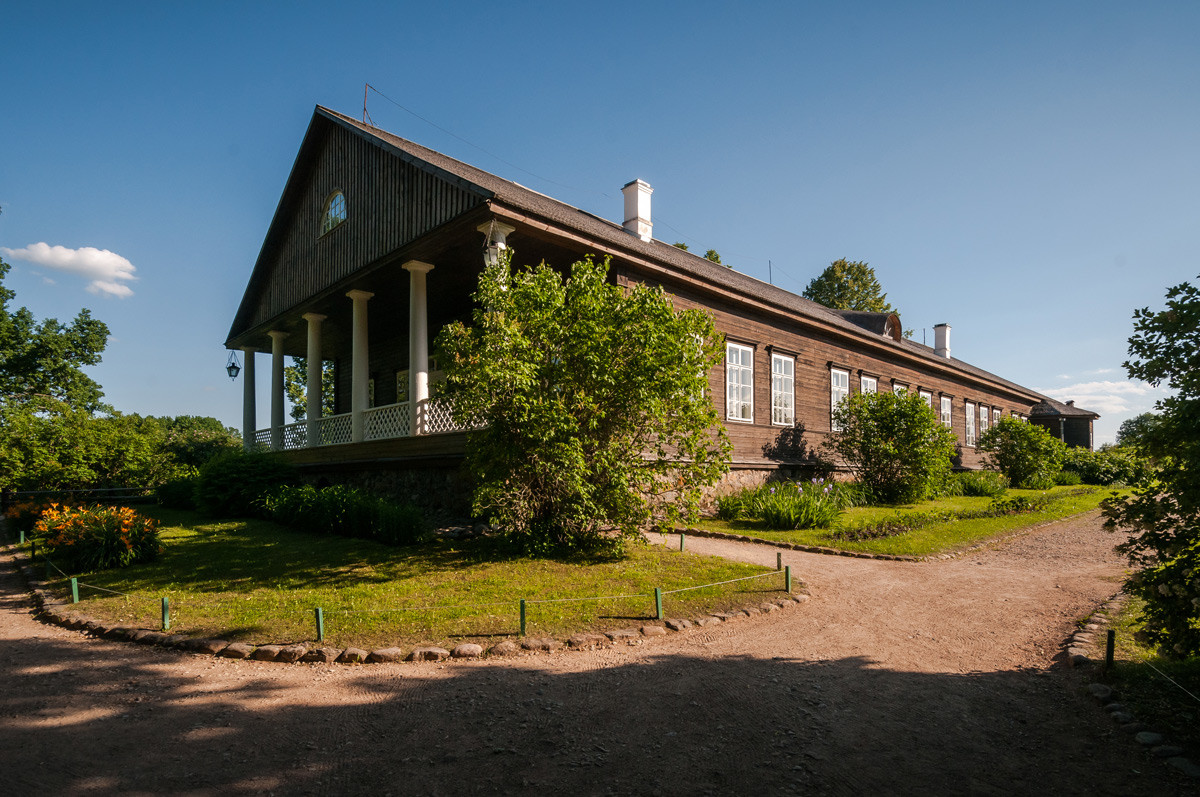 Pushkin was very friendly with the family of Praskovia Osipova-Wulf, who owned the neighboring Trigorskoye estate. The name of the place derives from the surrounding landscape, as it spreads across three hills.

Praskovia was known for her brilliant mind and knowledge. Many of the distinguished people of the time were proud to be called her friends. Pushkin first met her in 1817, and later came to visit her when he stayed at Mikhailovskoye. 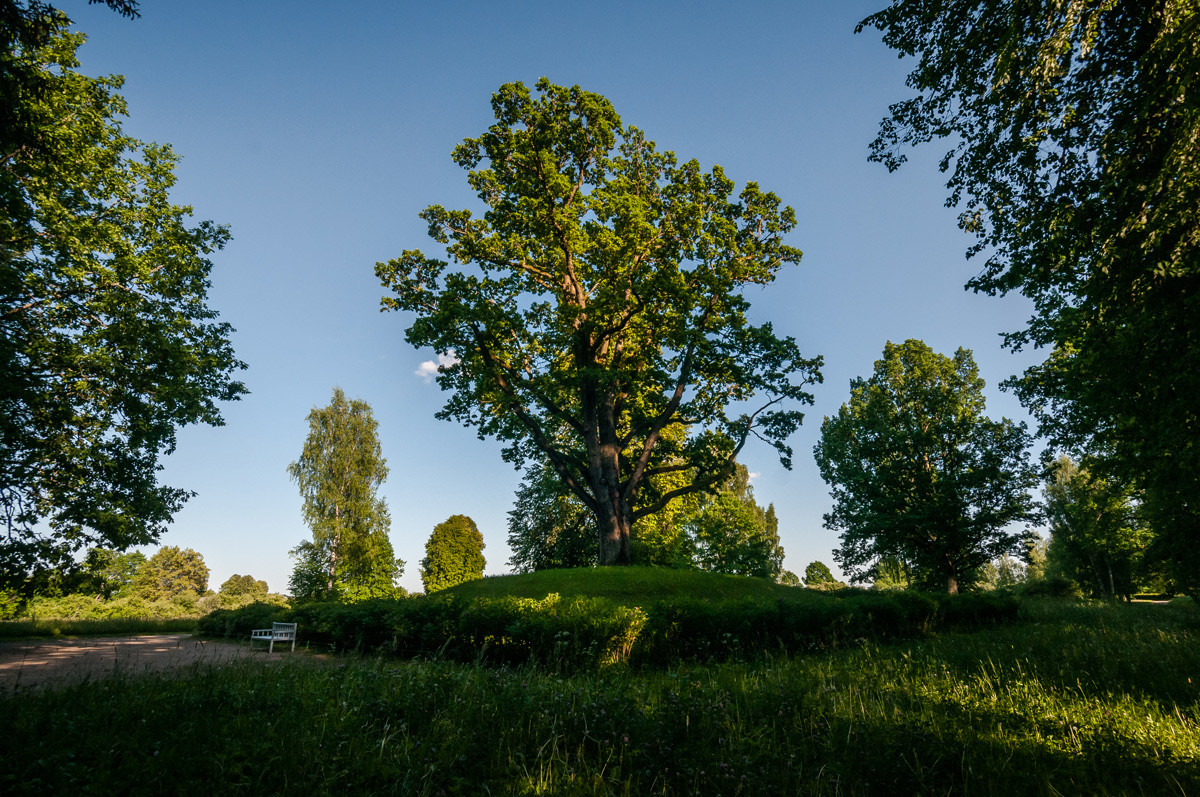 The picturesque park at Trigorskoye with three ponds, numerous alleys, paths and an orchard dates back to the 18th century.

One of the highlights of the park is a huge sundial, with an old oak tree in its center, whose shadow marks the time. Tatyana's Alley (named after the heroine of Eugene Onegin) runs from the sundial. Nearby is Onegin's Bench where Tatyana confessed her love to the literary hero and was told off by him in return. 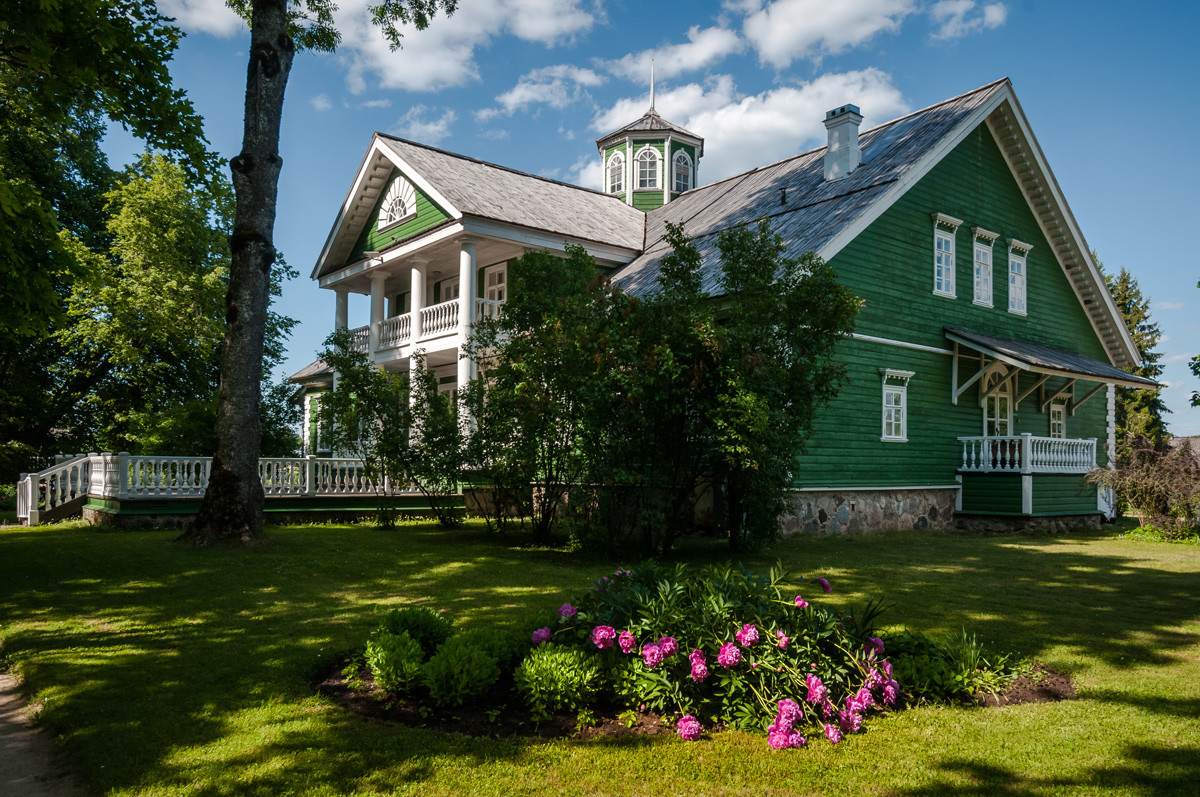 This estate, too, was granted to Pushkin's great-grandfather Abram Gannibal by Empress Yelizaveta Petrovna in 1742. It was later inherited by his son Peter, who built the manor house.

From 1822 to 1839, the estate belonged to the poet’s cousin once removed, Veniamin Gannibal. Pushkin often visited here: the museum has a desk at which he worked. 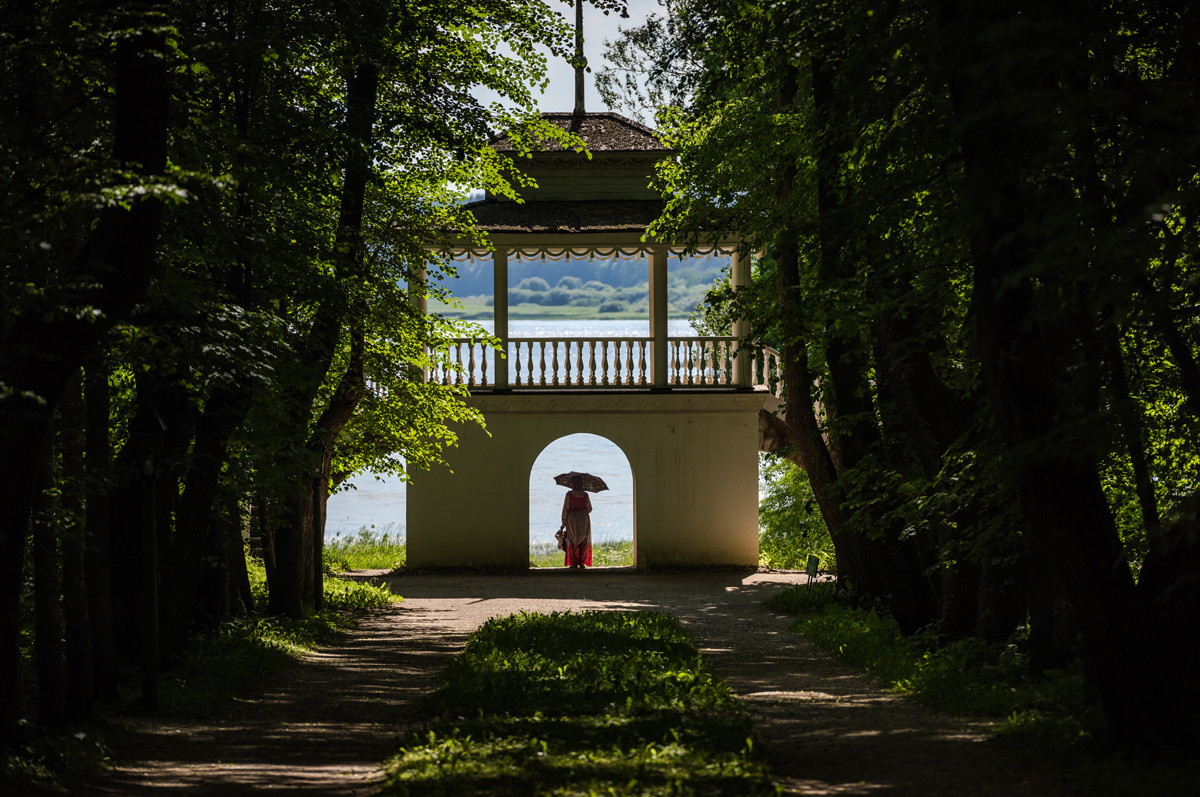 Petrovskoye became part of the Pushkin Hills museum in 1936, but its inventory was compiled only in 1952. It was then that the manor house, which had been destroyed by fire in 1918, was restored based on old photographs. In the late 1990s, Abram Gannibal's small house was restored, too. 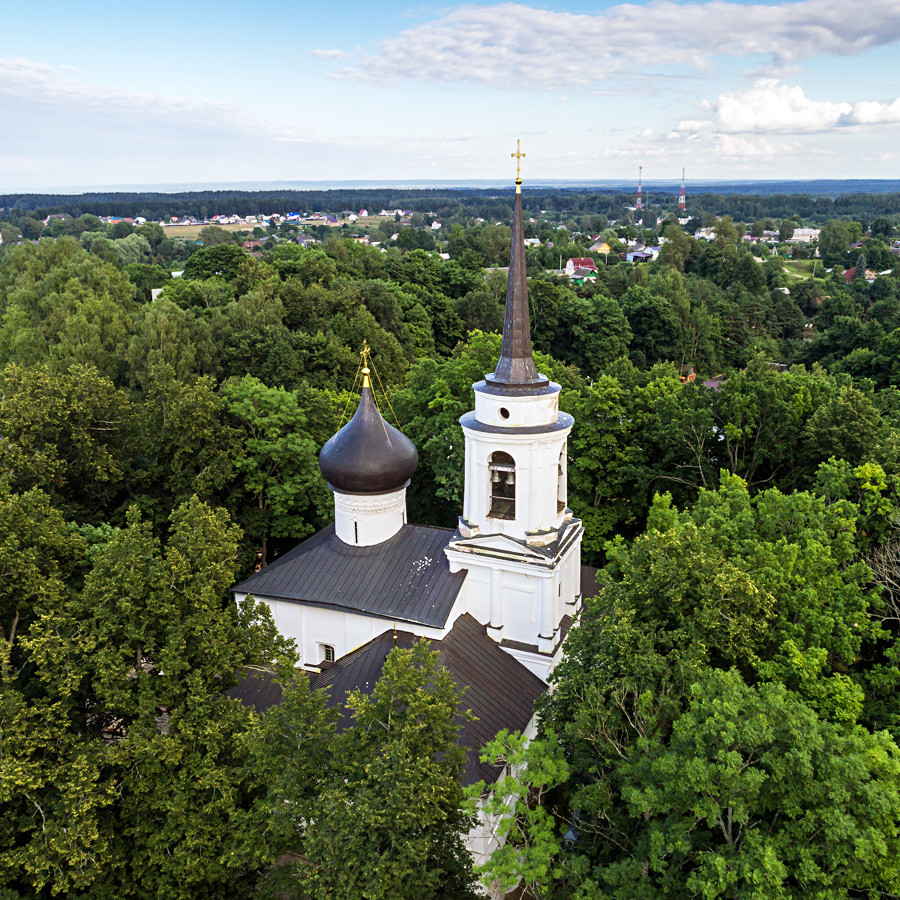 Not far from Mikhailovskoye is the Sviatogorsky Monastery, in whose library Pushkin often worked.

After the poet was killed in a duel in 1837, his ashes were brought here and buried in the Gannibal-Pushkin family tomb. 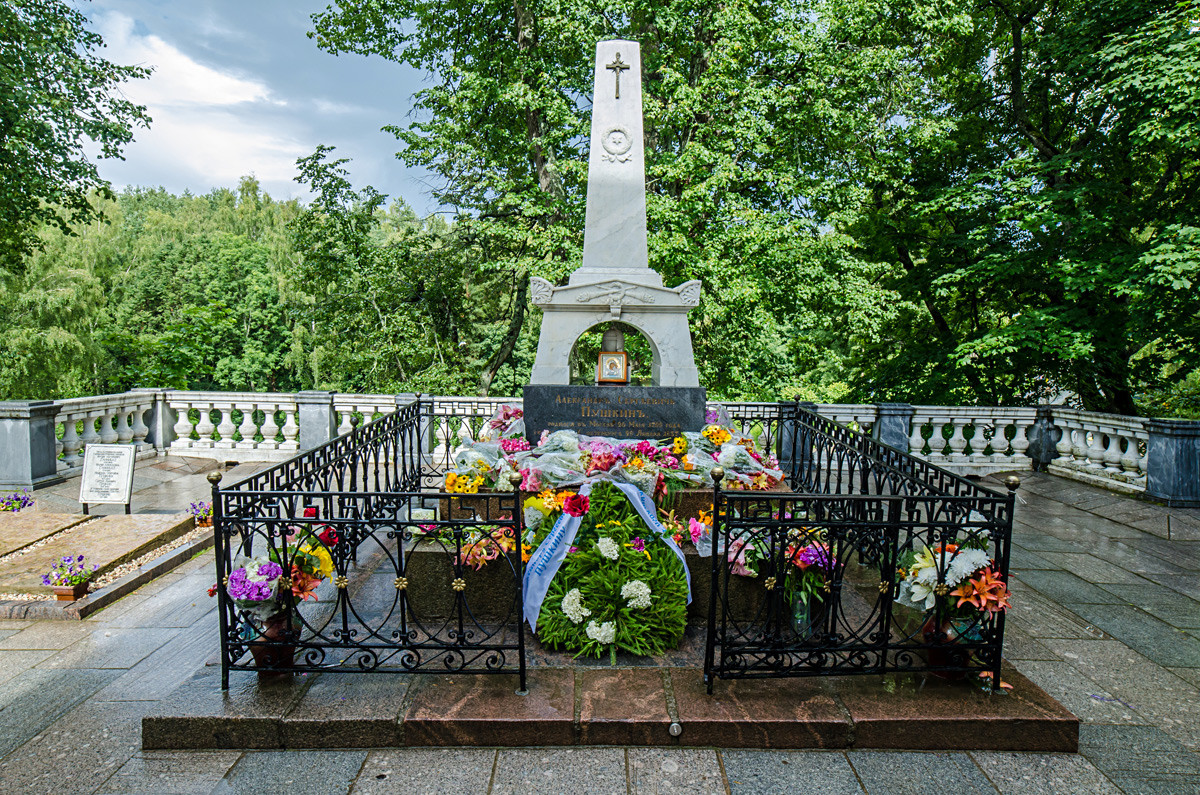