How to navigate the Moscow Metro – a brief guide 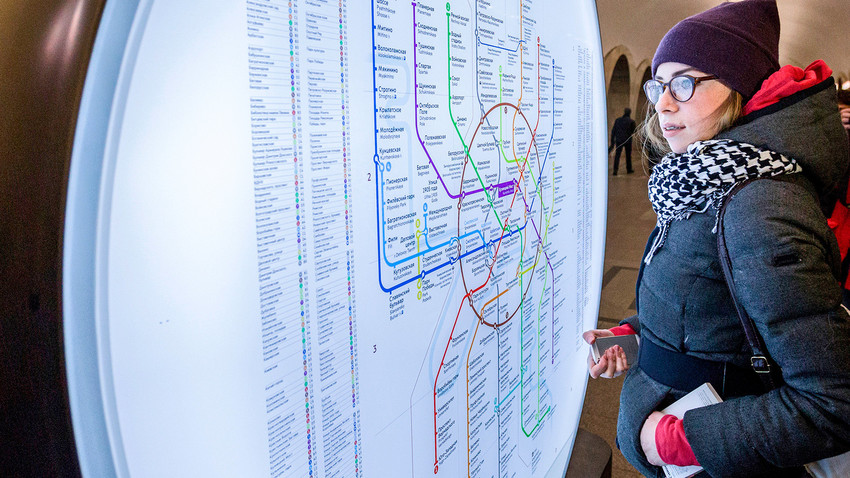 Moskva Agency
Navigating Moscow’s “bowl of spaghetti” subway system sometimes baffles even locals. We figure out how it works.

The Moscow Metro is considered one of the most beautiful in the world, and one of the largest, with 269 stations and counting! Still, no one is immune from standing flummoxed in the middle of the platform not knowing whether to go left or right, or which of six or more exits to take to escape the subterranean maze. Our guide sheds light on some of the finer points, and will definitely make your life in the subway easier.

These began to appear back in 2014, and are now visible at all the main interchange stations. Huge stickers with arrows on the floor show where you need to go to change line. 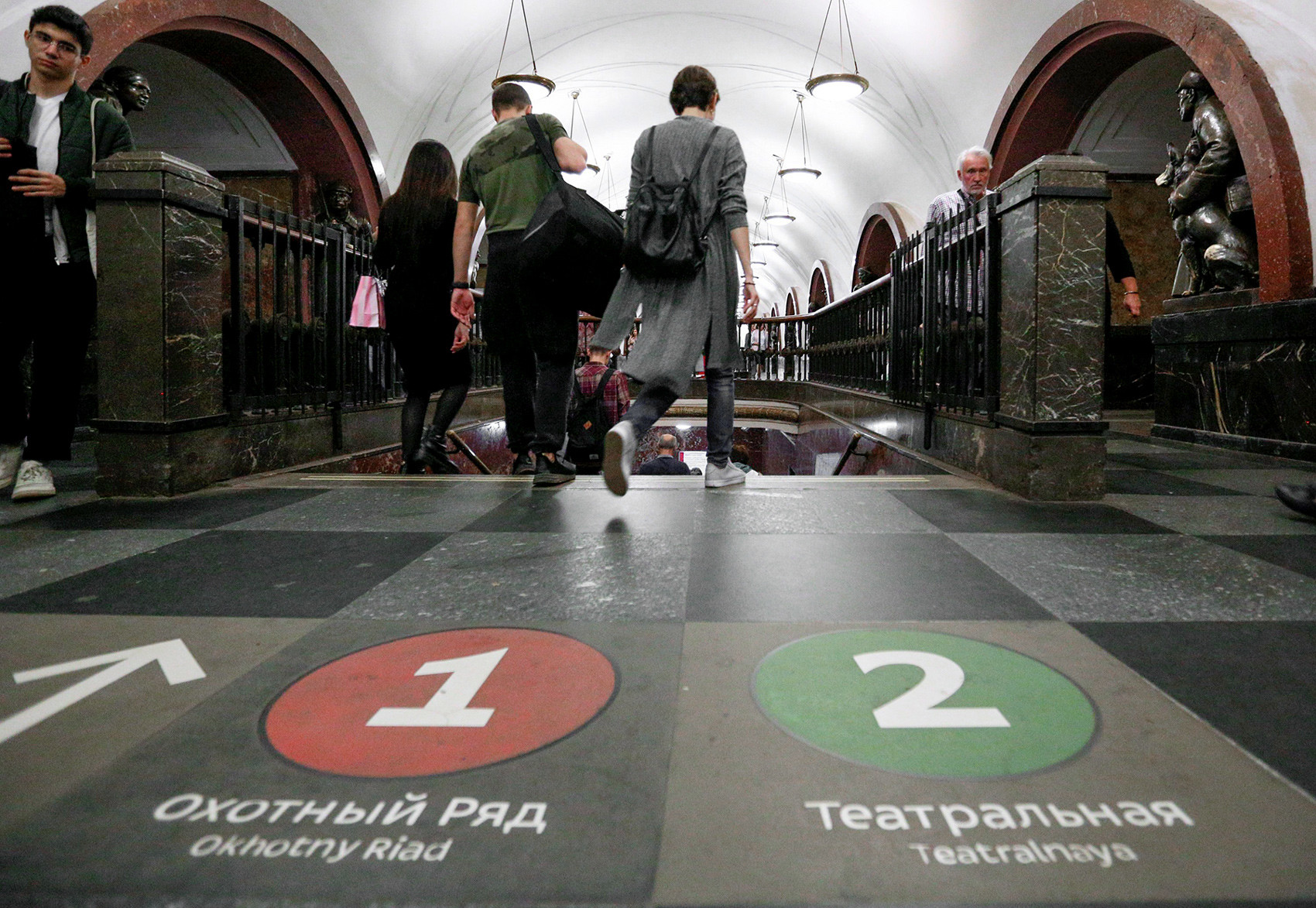 The lines are indicated by number and color, with the names written in Russian with English transliteration. For example, the number 7 in a purple circle means the Tagansko-Krasnopresnenskaya line; it is the purple line on the Metro map.

The Moscow Metro has over 20 different types of signs, which all complement each other. So if you look at one and are still confused, try looking at another.

Metro signs answer the key question: “Which way should I go?”, and usually show the end station of the line and/or the general direction (northbound, southbound, to the city center, etc.). Some overhead signs show only the line number and the end station; such a scheme is also used in the Paris Metro. There are also signs on the platform walls, which tend to be more detailed. They tell you which direction the train is headed and which stations it will stop at. The station you are currently at is marked with a rectangle in the color of the line, and all others are listed in order from top to bottom. 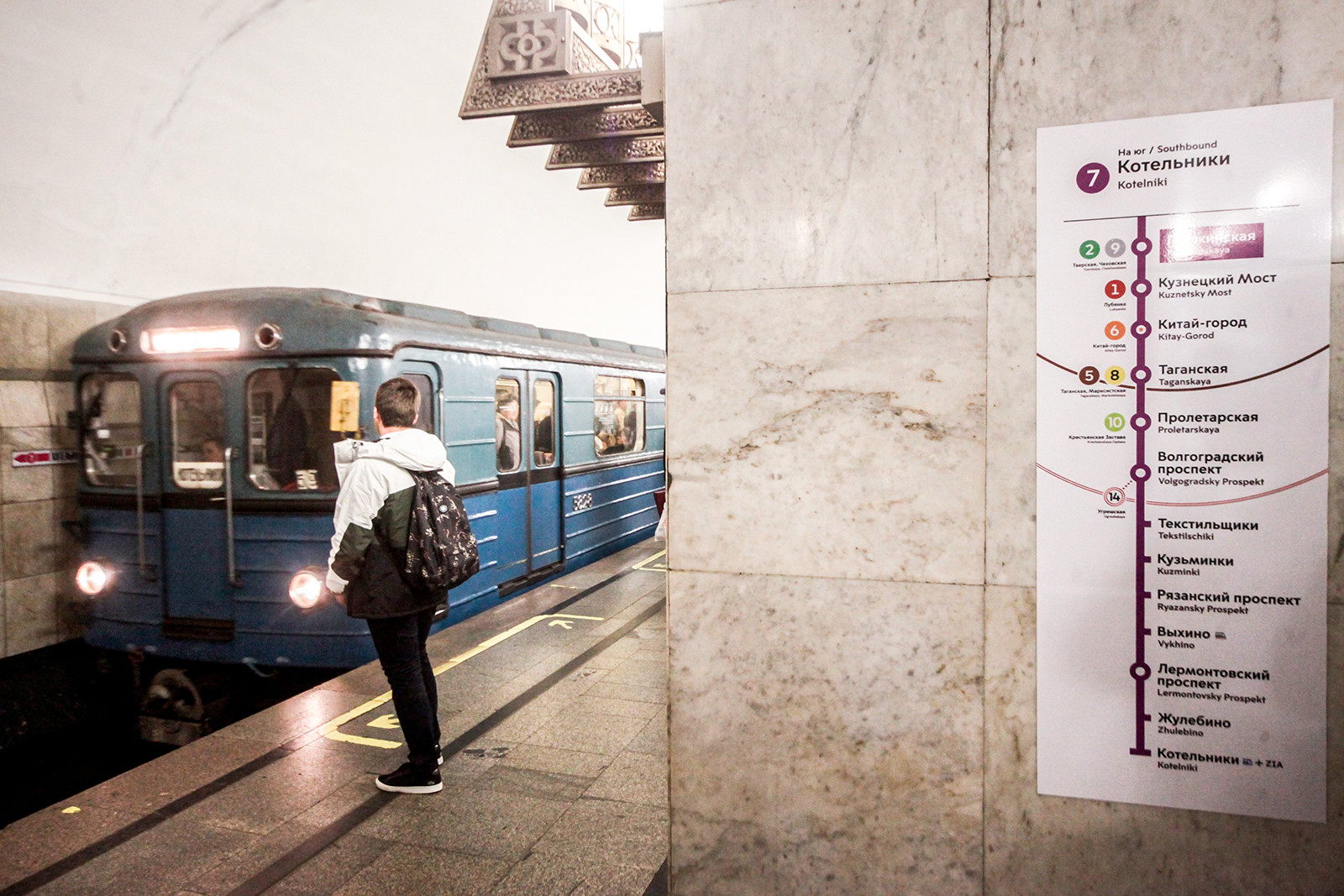 All sign information is duplicated in English: names of Metro stations in lobbies, on platforms, and in rail cars are all shown in Latin script. Stations in rail cars are also announced in two languages, Russian and English. And ticket windows with English-speaking staff are marked with the sticker “We speak English!”.

How to find the right exit

Many stations have several exits. One of the busiest central stations, Kitai Gorod, has no fewer than 15! But numbers, stands, and wall guides will help you out of the labyrinth without needing a ball of string.

Locals often use subway exits as geographical markers. For example, they might say “Let’s meet by the exit at Solyanka.” But for tourists this might not be very helpful. That said, maps showing the local area and main sights are available at exits (not all), or on round colorful stands in station lobbies and on platforms: 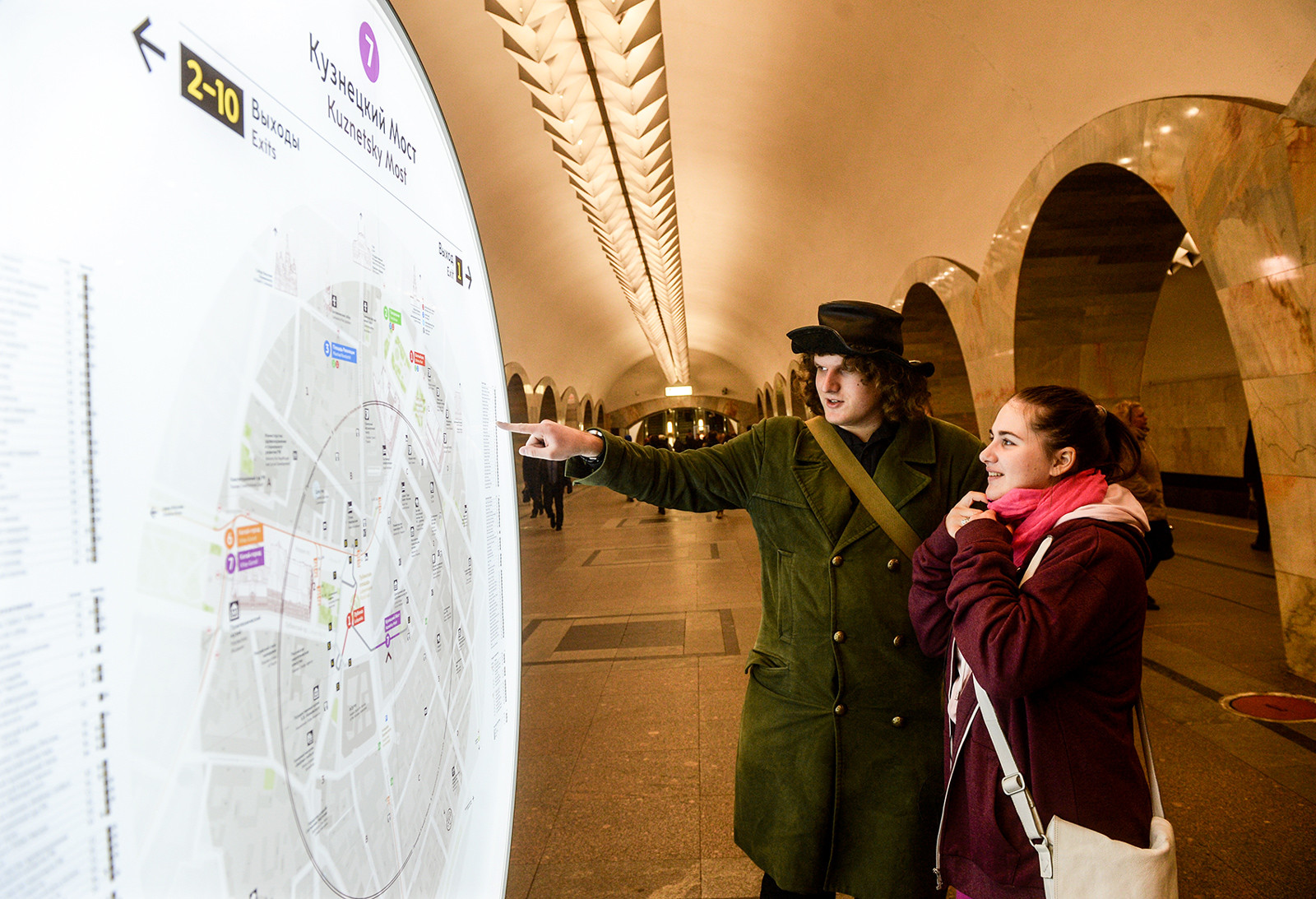 But since all exits are numbered, it’s best to be guided by the exit numbers.

There is often an overhead sign at exits listing the nearby sights, streets, shopping malls, and other reference points.

And on platform and lobby walls, you can see more stickers with bus, tram, and trolleybus numbers, showing the way to public transport stops. 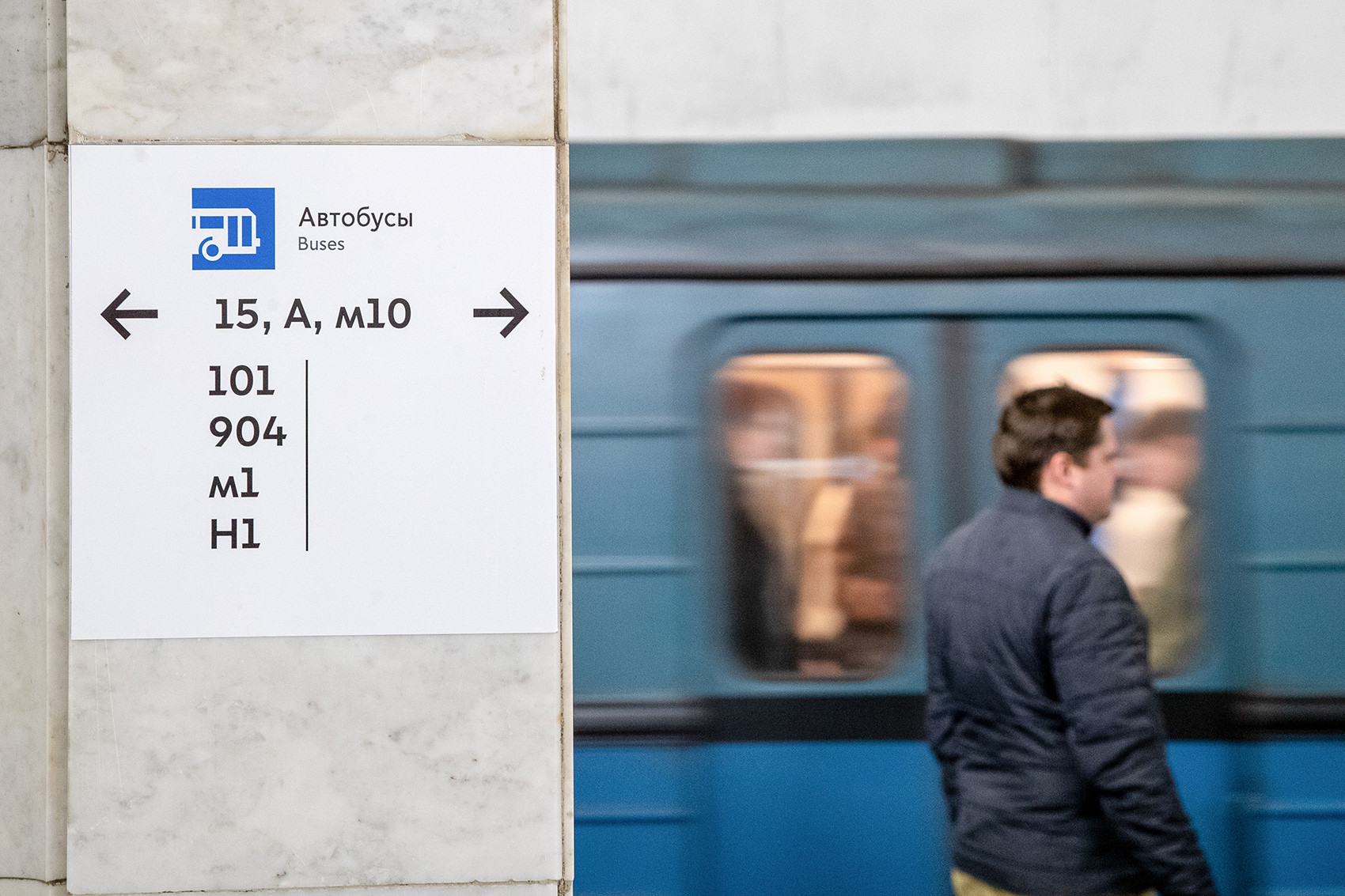 The traditional meeting place in the Moscow Metro is v tsentre zala ("the platform center"). But recently, special stickers with the words Mesto vtrechi ("Meeting place") have appeared, making it easier to find one other. 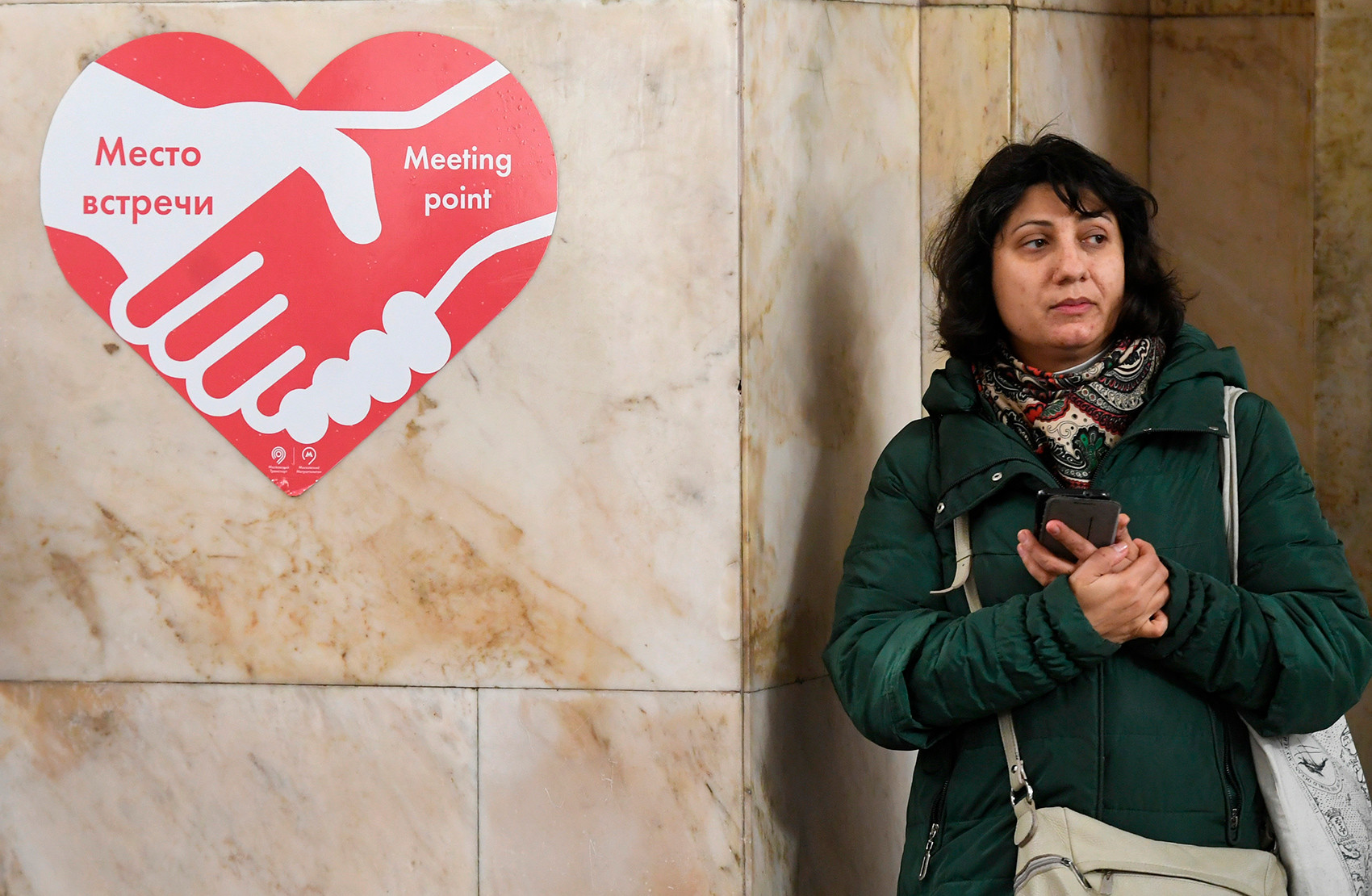 Some stations have a stand with a Metro map in the center of the platform and by the ticket windows in the lobby. But these days, the best way to navigate the branchy subway system is via a mobile app. Armed with one, you can work out the fastest route from A to B, calculate the journey time, see all available transfers and ground transport stops, and get notifications about temporary closures of stations and exits, etc.

MosMetro is the official app of the Moscow Metro:

Yandex.Metro is a similar app from Yandex

Some information boards provide a QR code – scan it to find out about the history of the station.