Discover the beauty of this ancient monastery in Rostov 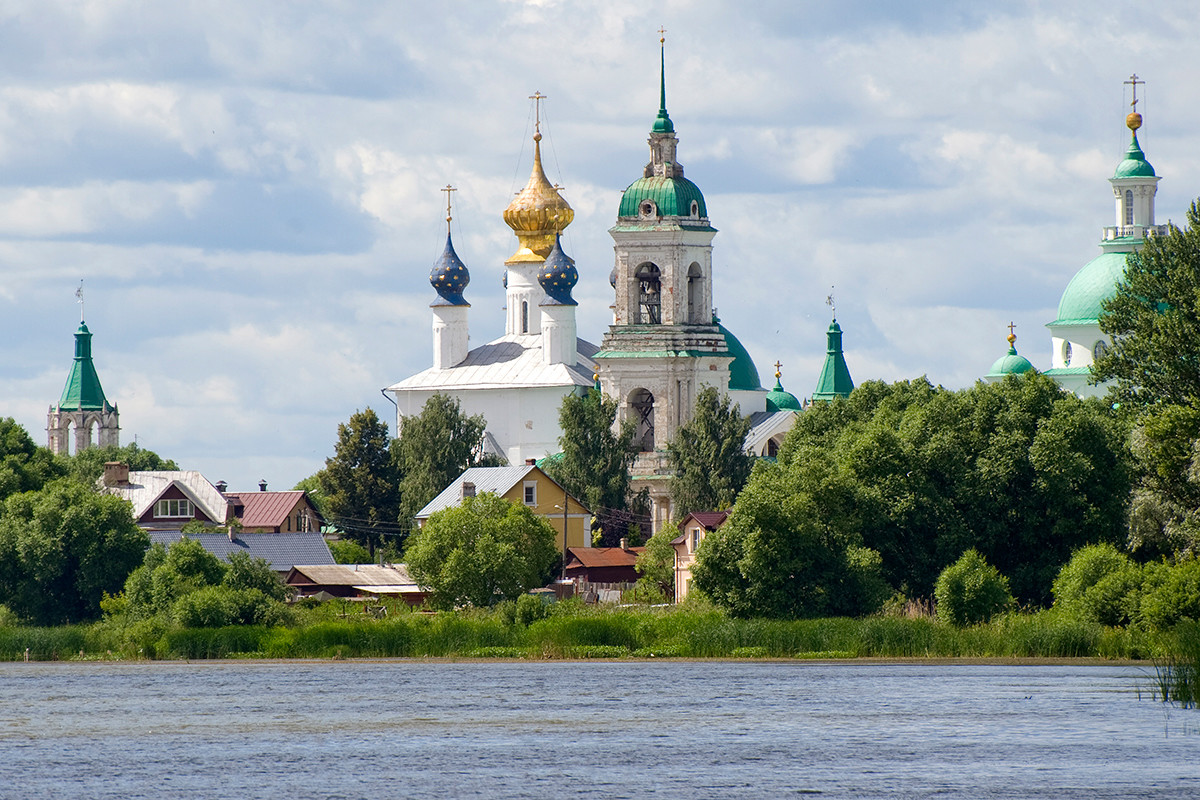 Located some 130 miles northeast of Moscow, the medieval town of Rostov Veliky benefits from a superb natural setting on the north shore of Lake Nero. Nowhere is this lyrical beauty more evident than at the Savior-St. Iakov-St. Dimitry Monastery, located on the western edge of town. Russian chemist and photographer Sergei Prokudin-Gorsky took several photographs of the ensemble during a 1911 visit. 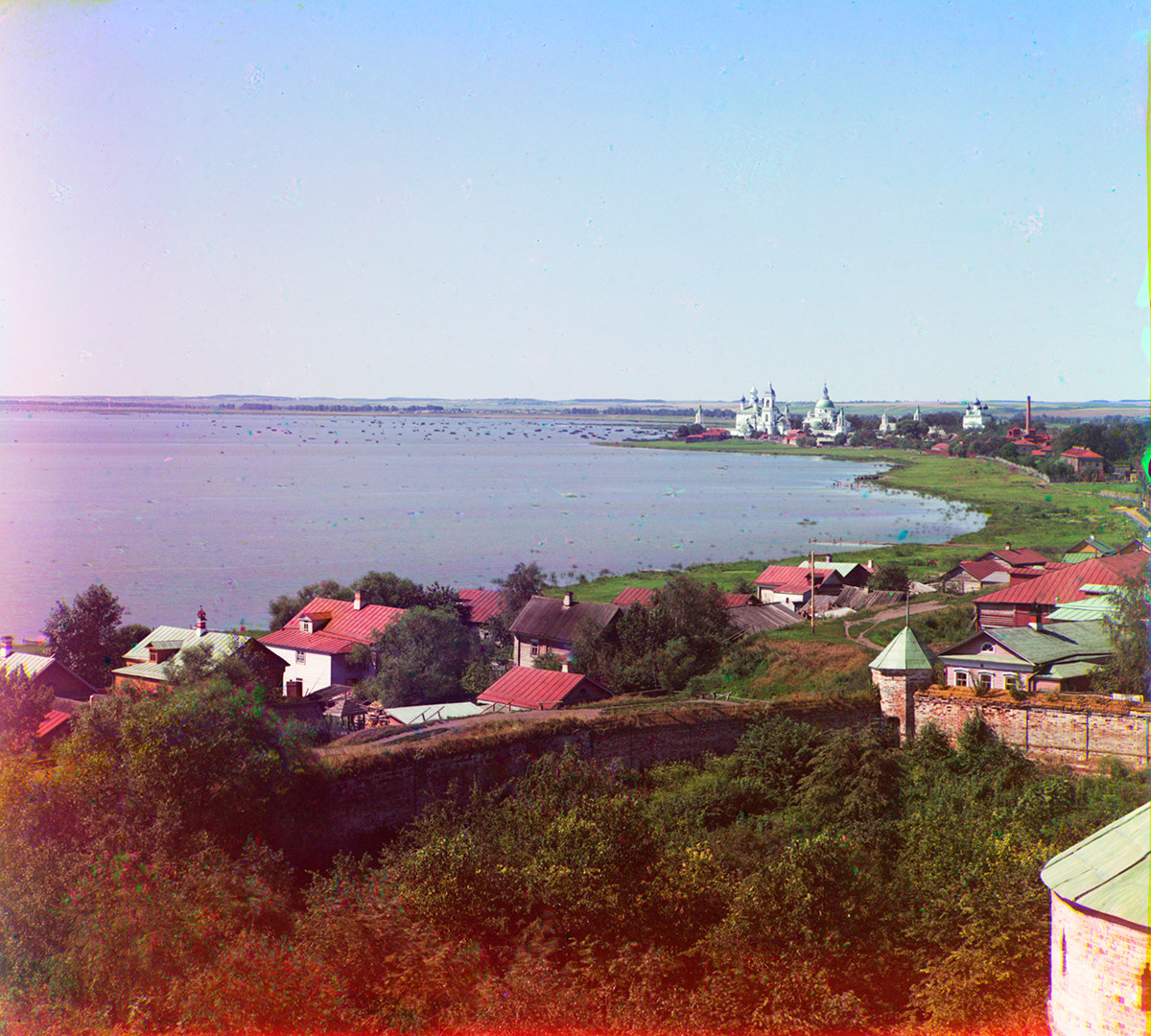 My photographs of the monastery were taken over a period from 1992 through 2019.

Rostov is one of the earliest historically attested towns in Russia, first mentioned under the year 862 in the ancient chronicle "Tale of Bygone Years." Throughout the 10th century, Slavic settlers – primarily from the Novgorod lands – moved into this area, already inhabited by Finno-Ugric tribes. 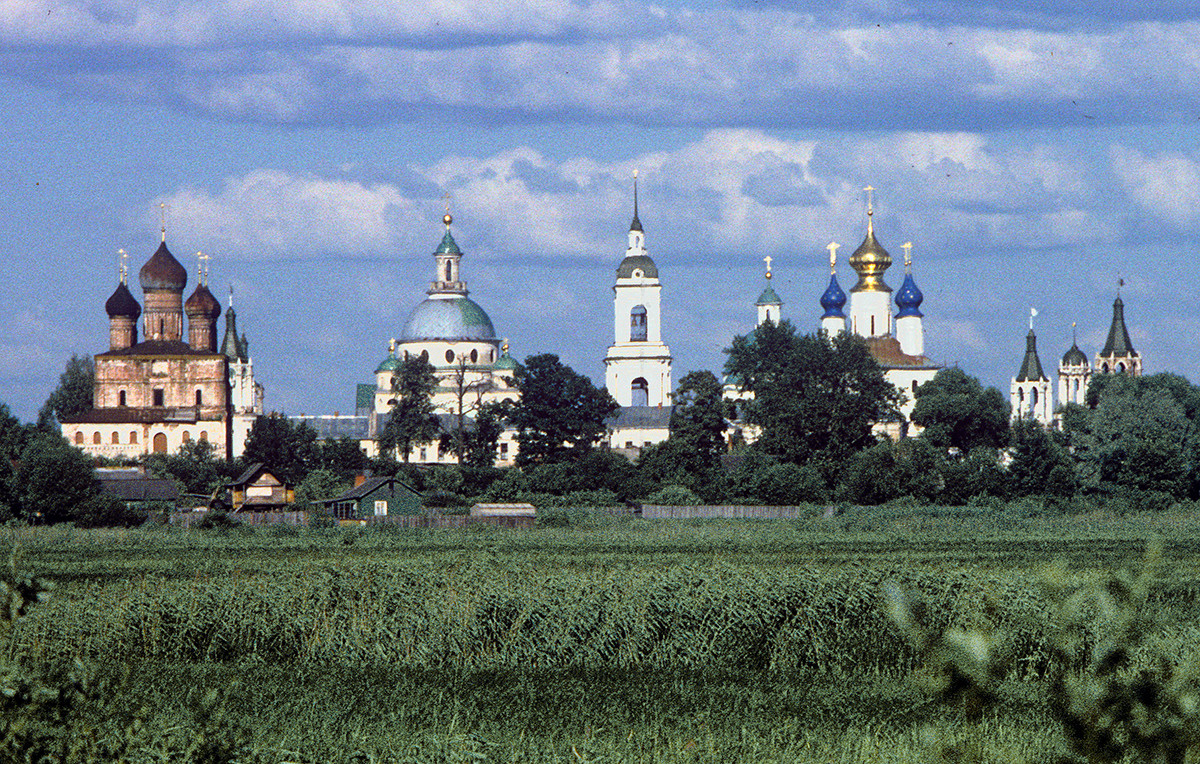 In 988, Prince Vladimir of Kiev, the Christianizer of Russia, gave the Rostov lands to one of his sons, Yaroslav, a major figure who subsequently became known as "the Wise." By the middle of the 11th century, the Rostov lands had passed to Yaroslav's son Vsevolod, and Christian missionaries such as Leonty of Rostov intensified their attempt to convert a largely pagan local population. For his efforts Bishop Leonty was martyred in the early 1070s.

The consolidation of church authority was symbolized by Rostov's Cathedral of the Dormition of the Virgin Mary, begun in the mid-12th century by Prince Andrei Bogolyubsky of Vladimir and rebuilt by Prince Konstantin Vsevolodovich in the 1220s. Although Rostov was captured during the Mongol invasion of 1237-38, the cathedral and monasteries remained largely intact. 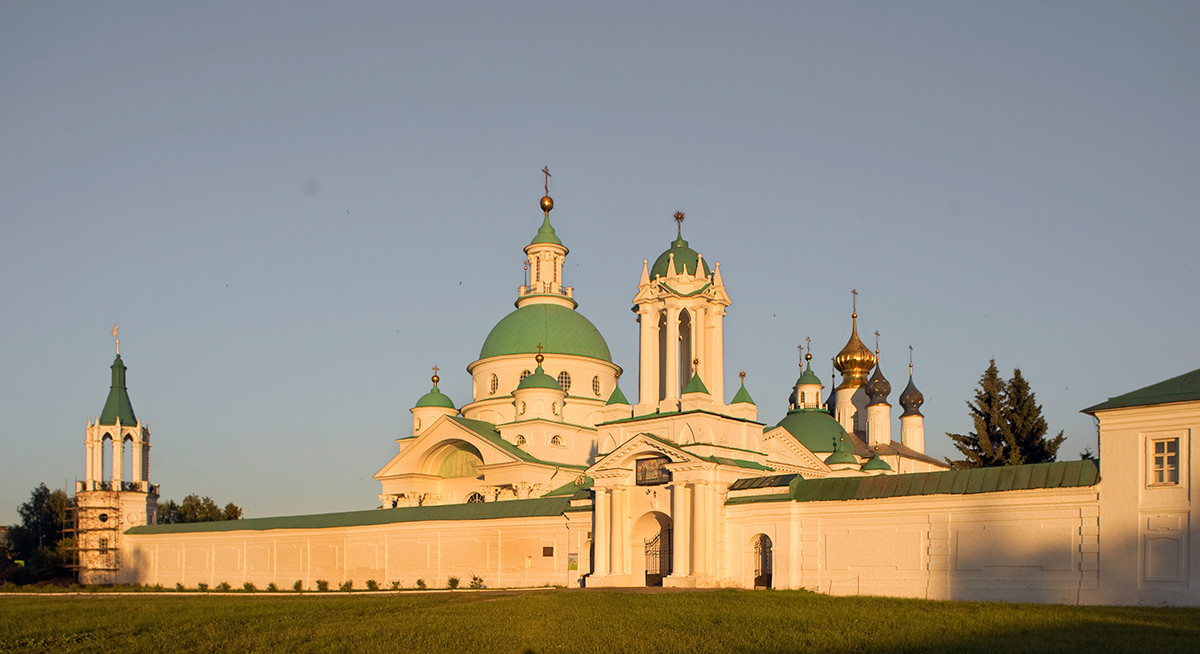 Following the invasion, Rostov gained importance through church institutions during a time of widespread devastation. In the 14th century Rostov served as a center of religious learning and missionary activity, producing such pioneers as St. Stephan of Perm and Epiphanius the Wise.

During this period, a monastic retreat was initiated in 1389 by Iakov, a former bishop of Rostov who had been driven from town for showing clemency to a woman condemned to be executed. Although little is known about Iakov, he apparently withdrew to a site on Lake Nero near the Archangel Michael Church, founded by Leonty in the mid 11th century. There he built a log church dedicated to the Conception of St. Anne. 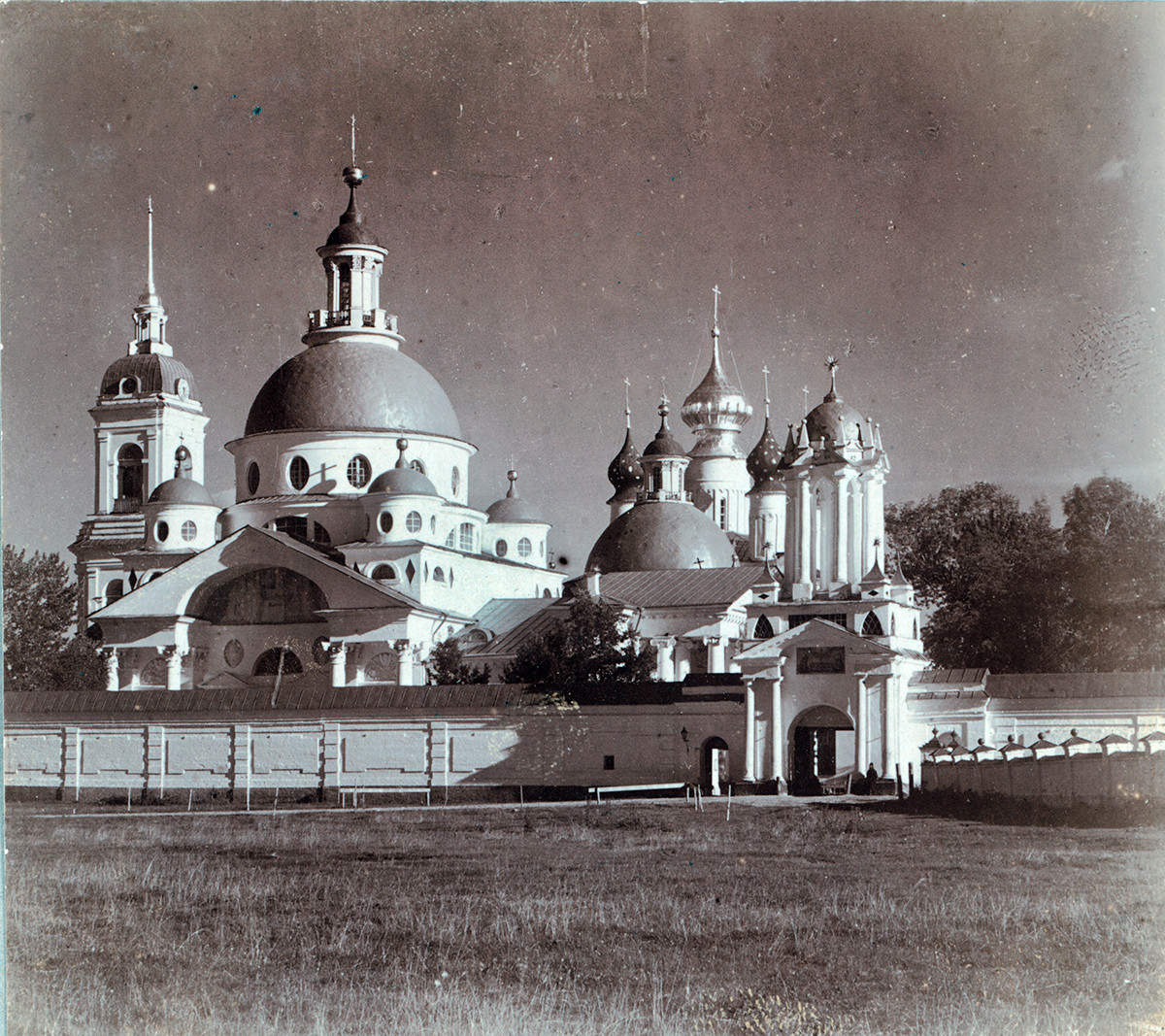 After Iakov’s death in November 1392, his remains were buried at the Conception of St. Anne Church, and his saintliness was venerated by the local folk. In the late 1540s, he was canonized at the famous Orthodox Church convocations organized by Moscow’s Metropolitan Macarius to recognize Russian saints.

In its first centuries, the monastery was known as Conception-St. Iakov. Its earliest masonry structure, the Cathedral of the Conception of St. Anne (originally dedicated to the Trinity), arose in 1686 on the site of the wooden St. Anne Church where St. Iakov was buried. 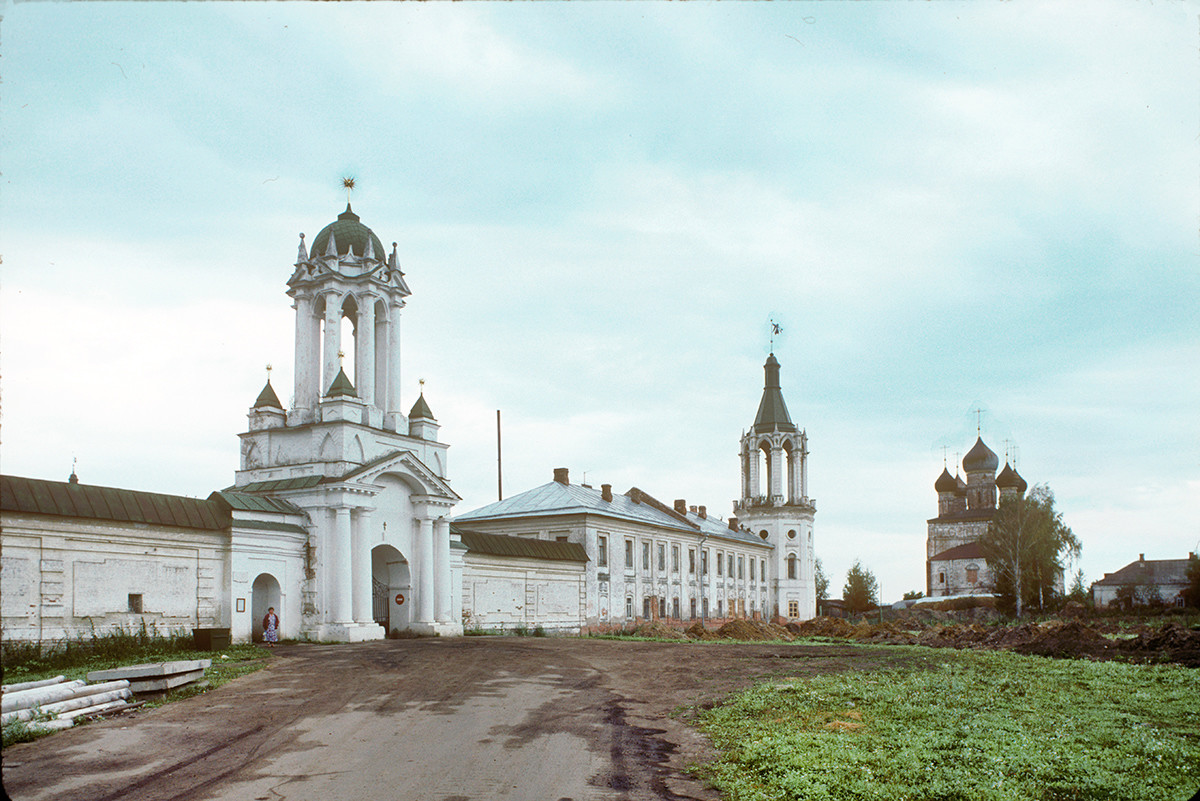 During the 18th century, the monastery experienced an explosion of growth beginning with the arrival in 1702 of Metropolitan Dimitry (Tuptalo), a Ukrainian prelate who was designated by Peter the Great to the position of Metropolitan of Rostov. Indeed, Dimitry is considered one of the most prominent church prelates during Peter’s reign. His burial in the Trinity Cathedral in 1709 laid the foundation for the monastery’s elevation.

In 1752 Dimitry’s remains were uncovered during a repair of the Trinity Cathedral floor. Two years later, the cathedral was rededicated to the Conception of St. Anne in honor of the original monastic shrine. With the canonization of Dimitry of Rostov in 1757, Empress Elizabeth (Peter the Great’s daughter) made lavish donations to the monastery, as did her successor, Peter III, during his brief reign (1762). 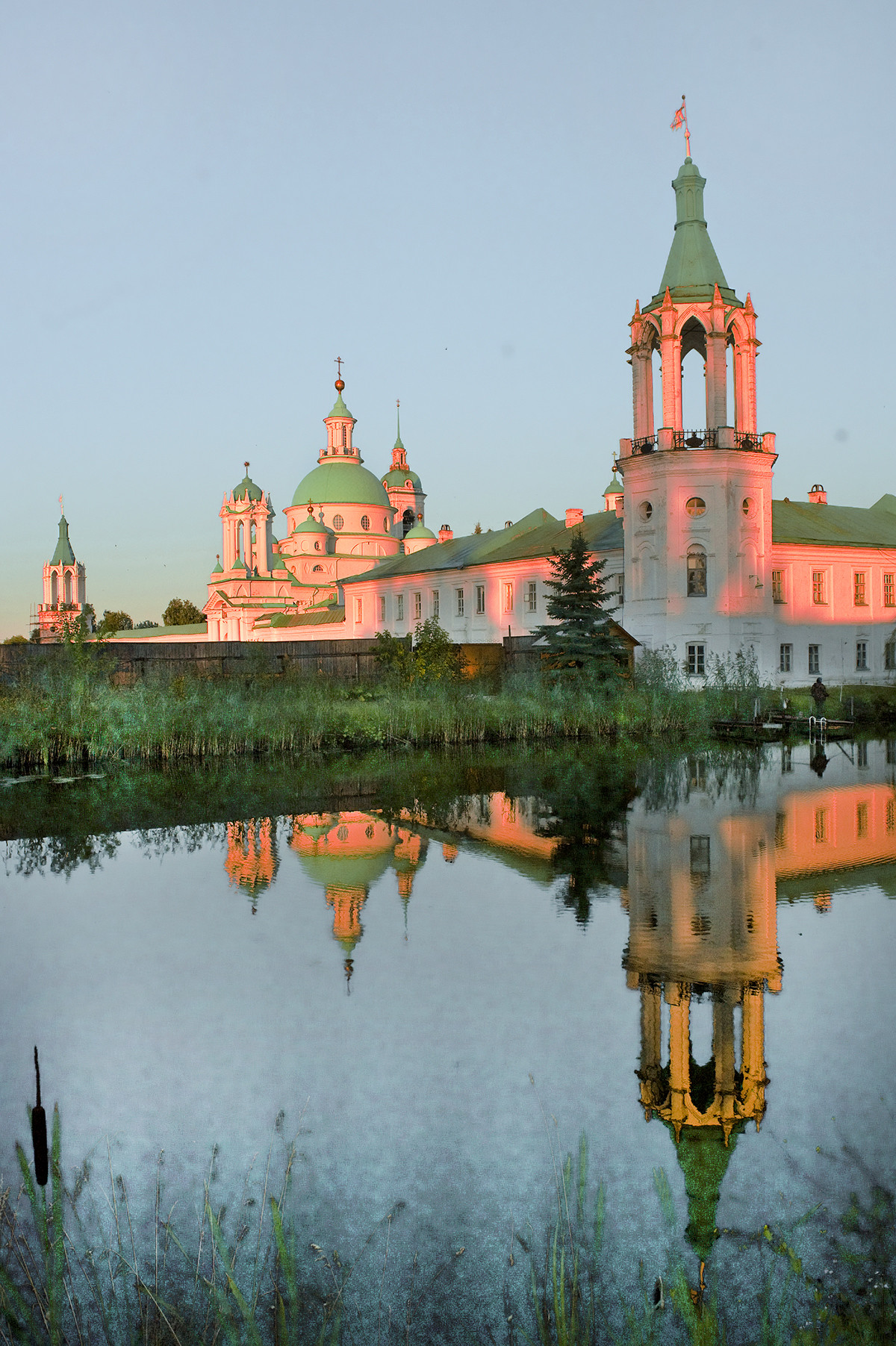 A major enhancement in the monastery’s prestige occurred during the reign of Empress Catherine II (the Great), who chose the monastery for the first pilgrimage of her reign. Her visit in late May 1763 proved to be an event of enormous symbolic importance for the new empress’s consolidation of power.

The following year the monastery was elevated in status to be supervised directly by the Holy Synod, which was the main governing body of the Russian Orthodox Church from 1721 to 1917. This assured it of major financial support at a time when many monasteries were being closed by Catherine’s reform of the monastic system. 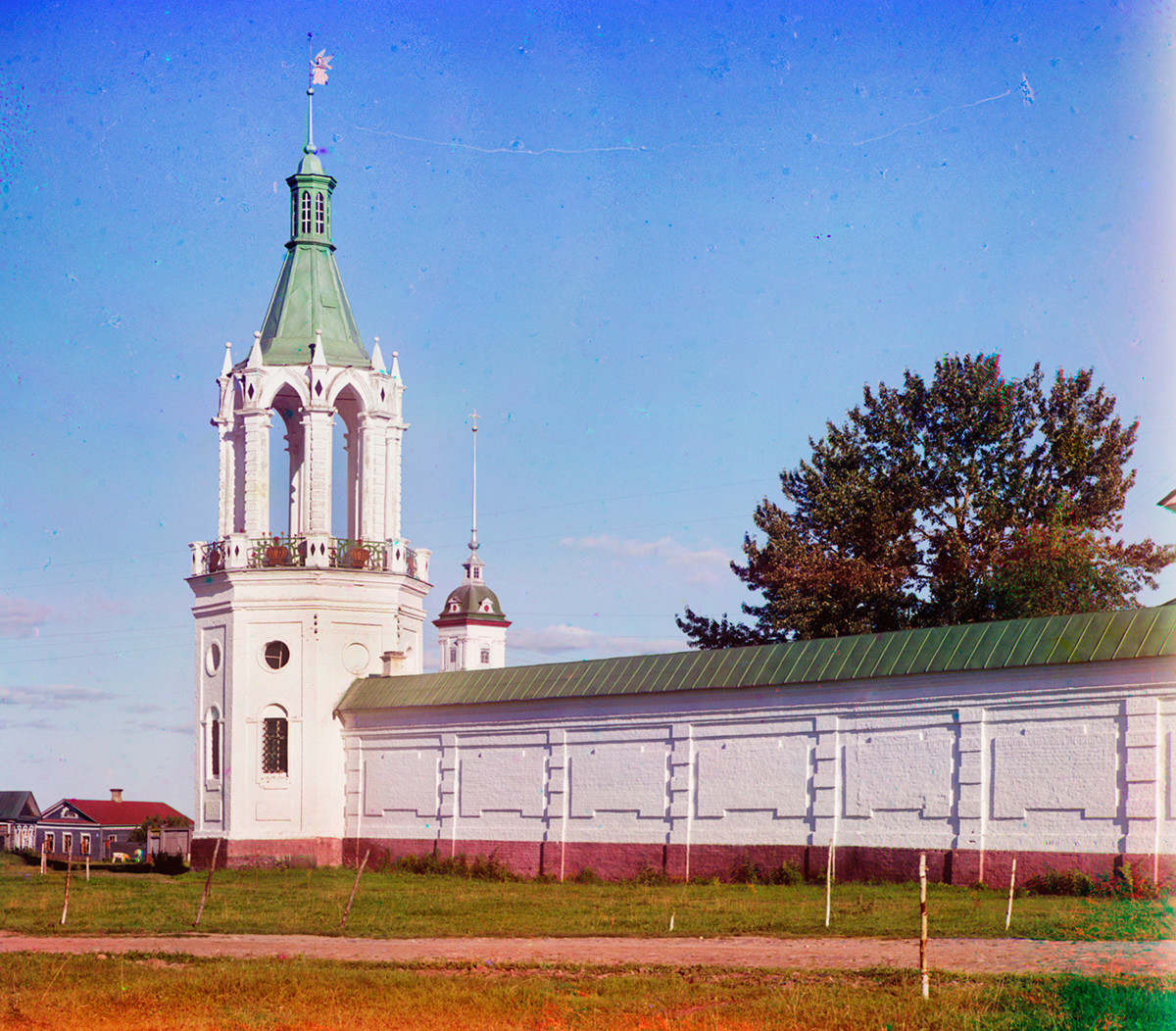 The greatest homage to the prelate was the building of the grand neoclassical Church of St Dimitry, Metropolitan of Rostov, which took place in 1795-1801. Patronage for the church – often referred to as “cathedral” because of its imposing size – was provided by Count Nicholas Sheremetyev. This remarkable monument, photographed by Prokudin-Gorsky on both interior and exterior, will be the subject of a separate article. 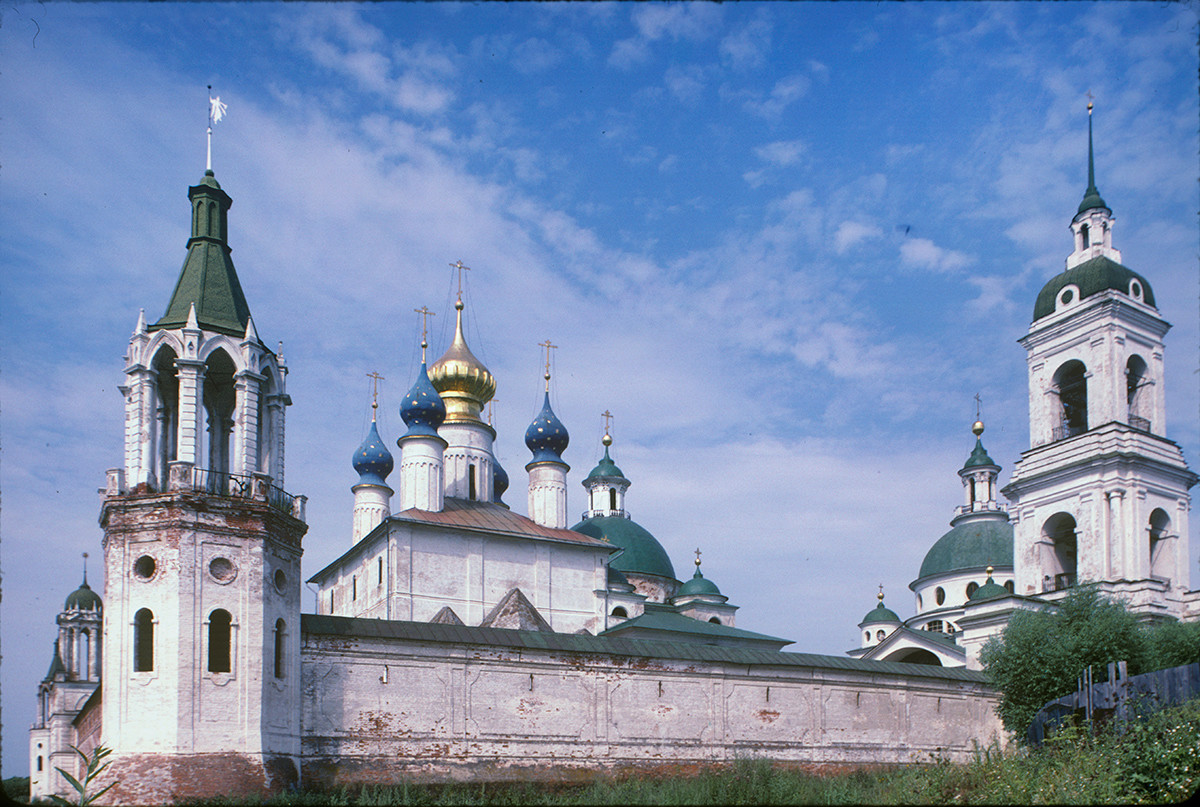 During the second half of the 18th century, the monastery’s stout log enclosure was replaced with brick cloisters and walls (1776-82). In the late 1770s, the east wall was punctuated with a three-tiered bell tower that both Prokudin-Gorsky and I used as a platform to photograph the majestic kremlin ensemble at the center of Rostov.

In the early 19th century, the corner towers of the high walls were graced by decorative crowns added in 1808-09. Shortly thereafter, the north and south gates gained elaborate neogothic superstructures (1812-13). Prokudin-Gorsky’s fondness for these details is evident in several views. My recent photographs elaborate on their picturesque qualities, especially in late evening summer light. 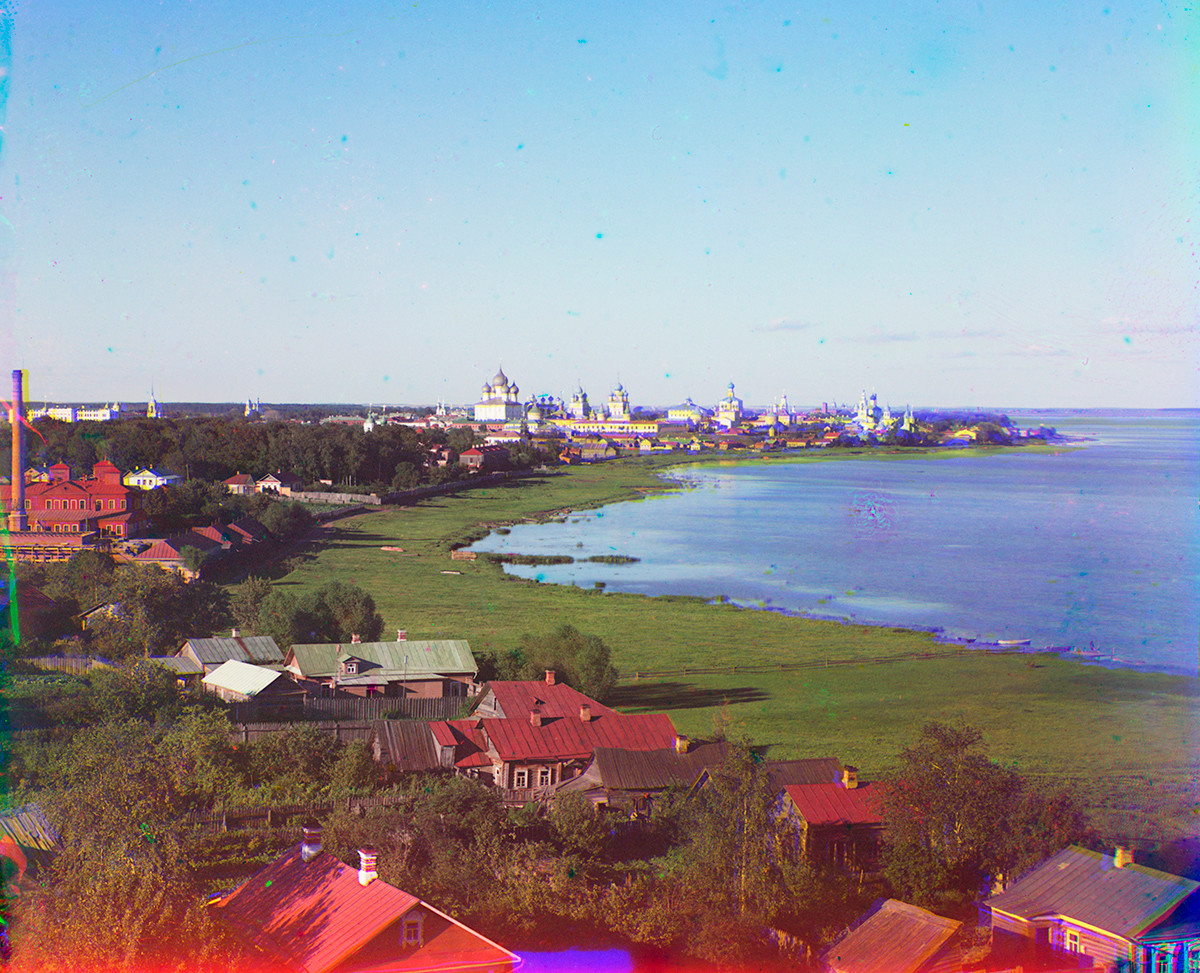 Further additions to the monastic ensemble were made from the mid-19th century to the early 20th century. During this period the monastery was visited by every tsar except Alexander III, as well as numerous other members of the royal family.

The monastery’s prosperity came to an end with the establishment of Soviet power. After its complete closure as a religious institution in 1923, some monastery treasures were preserved by the Rostov Museum, but the monastery in general was ransacked and then disfigured by haphazard conversion to other uses. The extent of the degradation is evident from my photographs of the early 1990s after the return of the monastery to the Orthodox Church in April 1991.

Prolonged restoration efforts have returned the Savior-St. Iakov-St. Dimitry Monastery to a position as one of the most prominent in central Russia. Through this revival, Rostov now has a center for scholarship as well as for cultural and spiritual life. 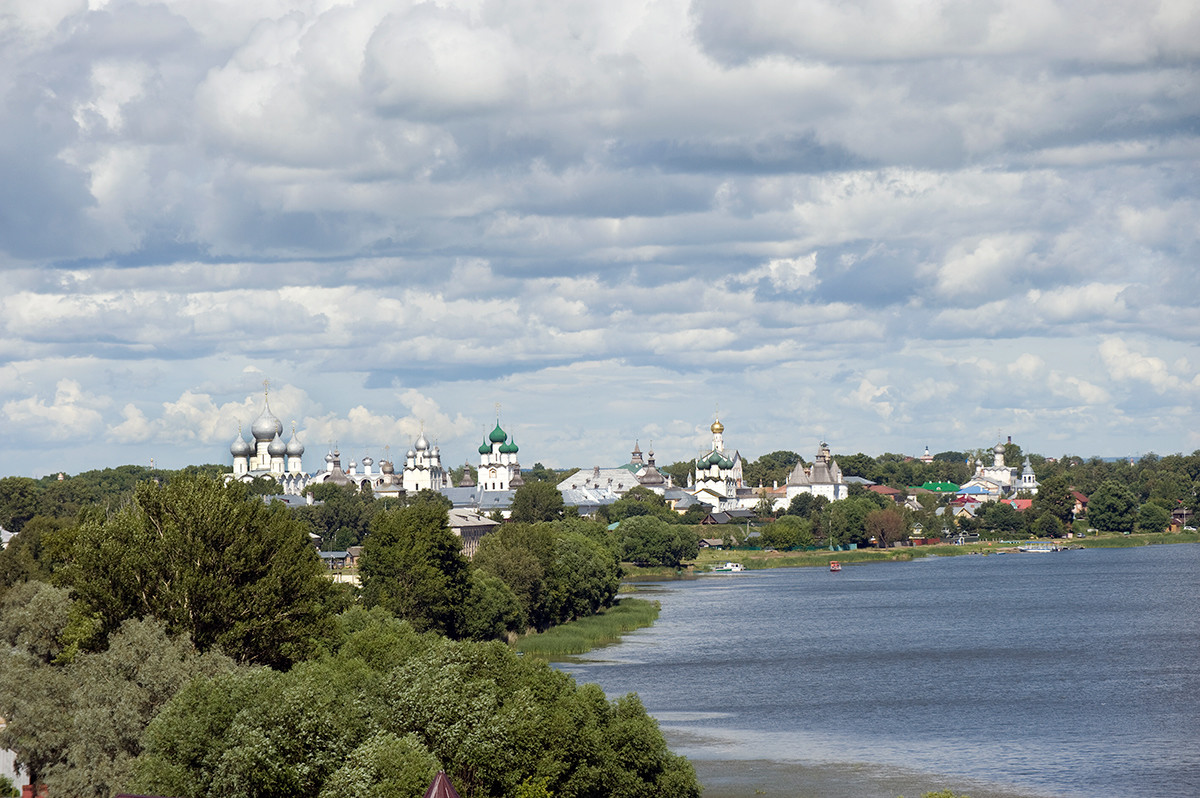