Heavenly visions: Church of St. John the Divine in the Rostov Kremlin 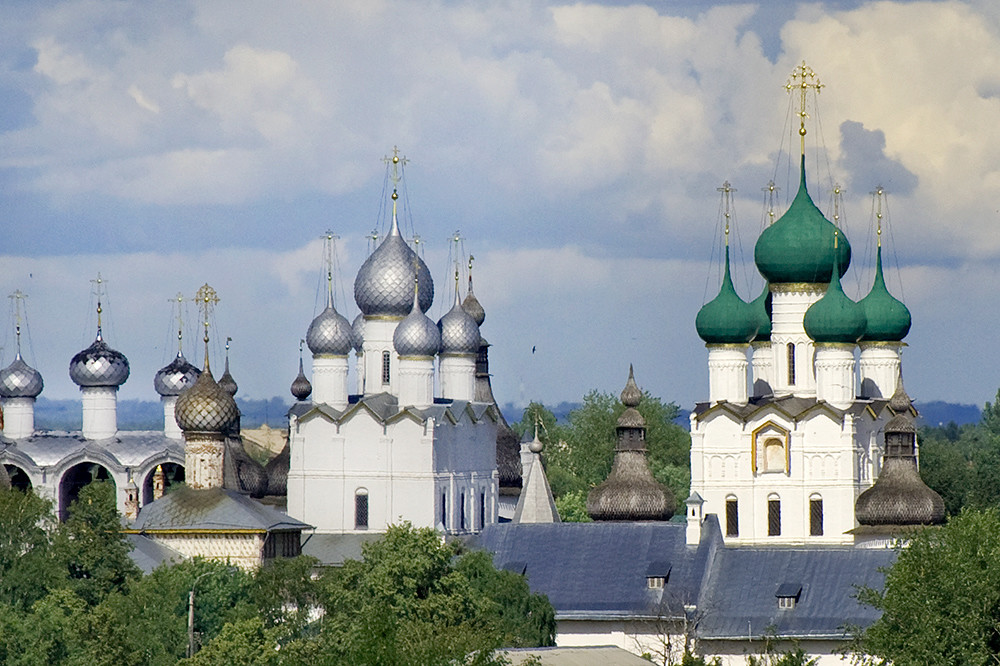 Located some 130 miles northeast of Moscow, Rostov is one of the earliest historically attested towns in Russia, first mentioned under 862 in the chronicle "Tale of Bygone Years." The Russian photographer and chemist Sergei Prokudin-Gorsky (see box text below) spent time there in 1911 photographing the town’s numerous historic sites. 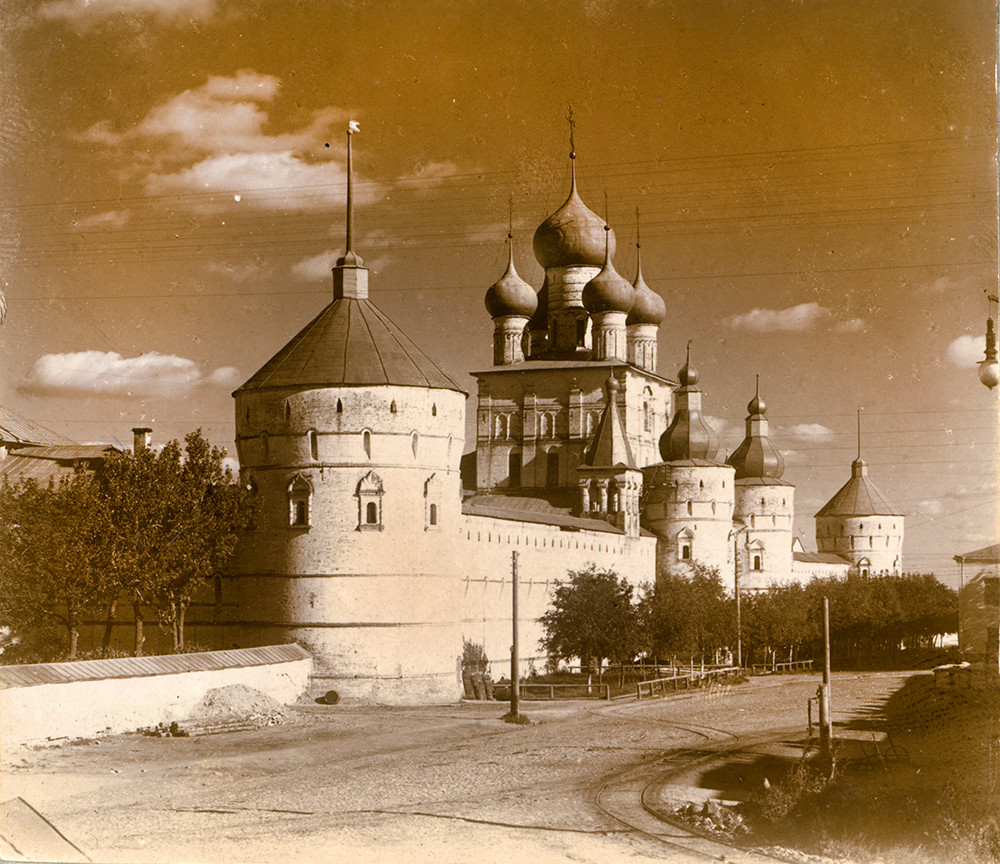 Rostov Veliky’s main architectural ensemble is the majestic Court of the Metropolitan, popularly known as the Rostov kremlin, which rises from the north shore of Lake Nero. Its name pays homage to its primary builder, Metropolitan Jonah Sysoevich of Rostov (ca. 1607-90). The son of a country priest named Sysoi, Jonah was tonsured at the Resurrection Monastery in Uglich. He rose through the monastic hierarchy and in 1652 was appointed Metropolitan of Rostov by the newly elected Patriarch Nikon. (After the Patriarch, Metropolitan is the highest ecclesiastical rank in the Russian Orthodox Church.)

During this period, the Russian Church embarked on a number of large building projects that proved to be the final expression of church power before the state curtailed its wealth in the 18th century. For example, Jonah had at his command 16,000 serfs as well as the best craftsmen of his large and prosperous diocese. 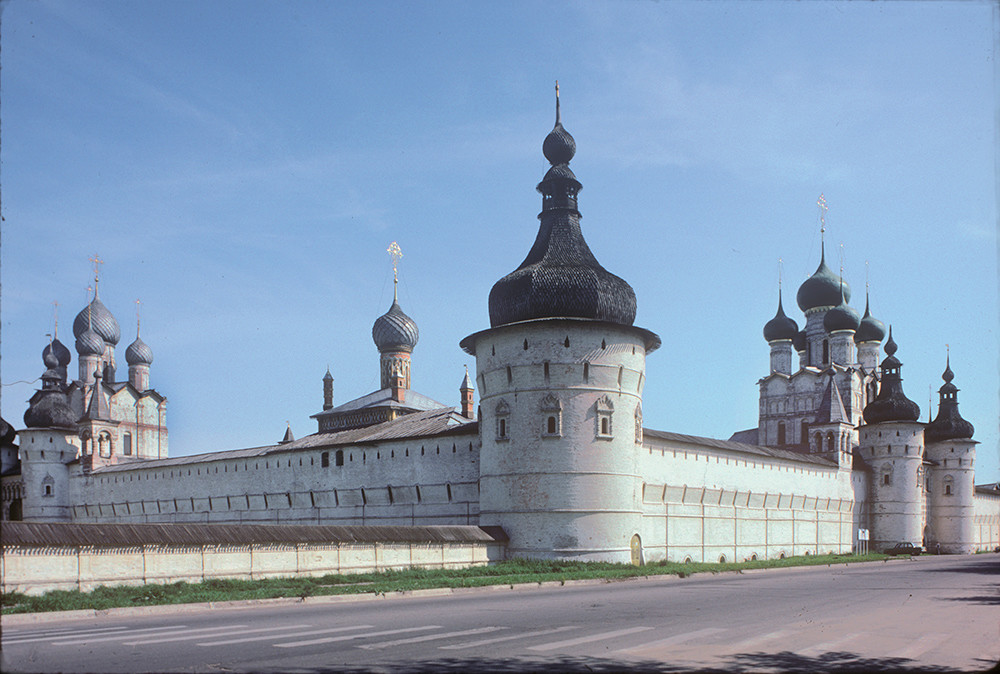 Within 20 years — between 1670 and 1690 — Jonah's builders erected not only churches, residences and service buildings within the Metropolitan's Court, but also its monumental walls. Built to suggest an imposing medieval fortress, the walls in fact had no military purpose, but symbolized the power of the Orthodox Church and its ability to create a heavenly refuge on earth.

The church in the west wall

The north and west walls contained the main kremlin entrances, which were marked by two “gate” churches flanked by festive towers. Among our many photographs of the kremlin, Prokudin-Gorsky and I both devoted special attention to the west wall. 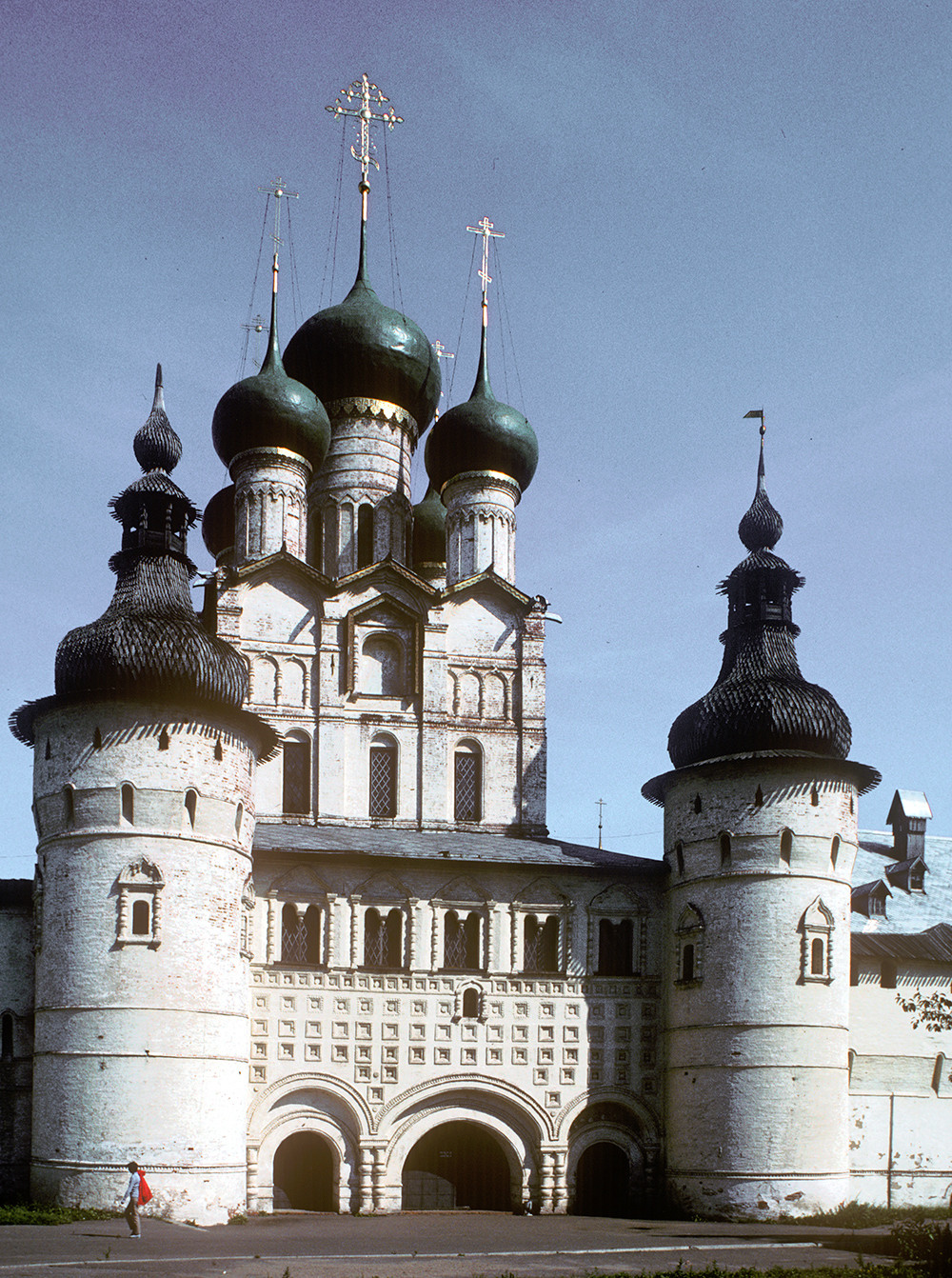 The center of the west wall is dominated by the Church of St. John the Divine over West Gate, built in 1680-83 and widely considered the most accomplished architectural work created under the direction of Meropolitan Jonah. The main façade of the church faces west and is framed by two towers in a striking medieval style.

No less imposing is the church’s east façade, which faces the interior of the kremlin territory and ascends in a series of clearly delineated levels. Although Prokudin-Gorsky did not take a general view from the east, I have included one of my east perspectives to give a sense of the rich structural development. 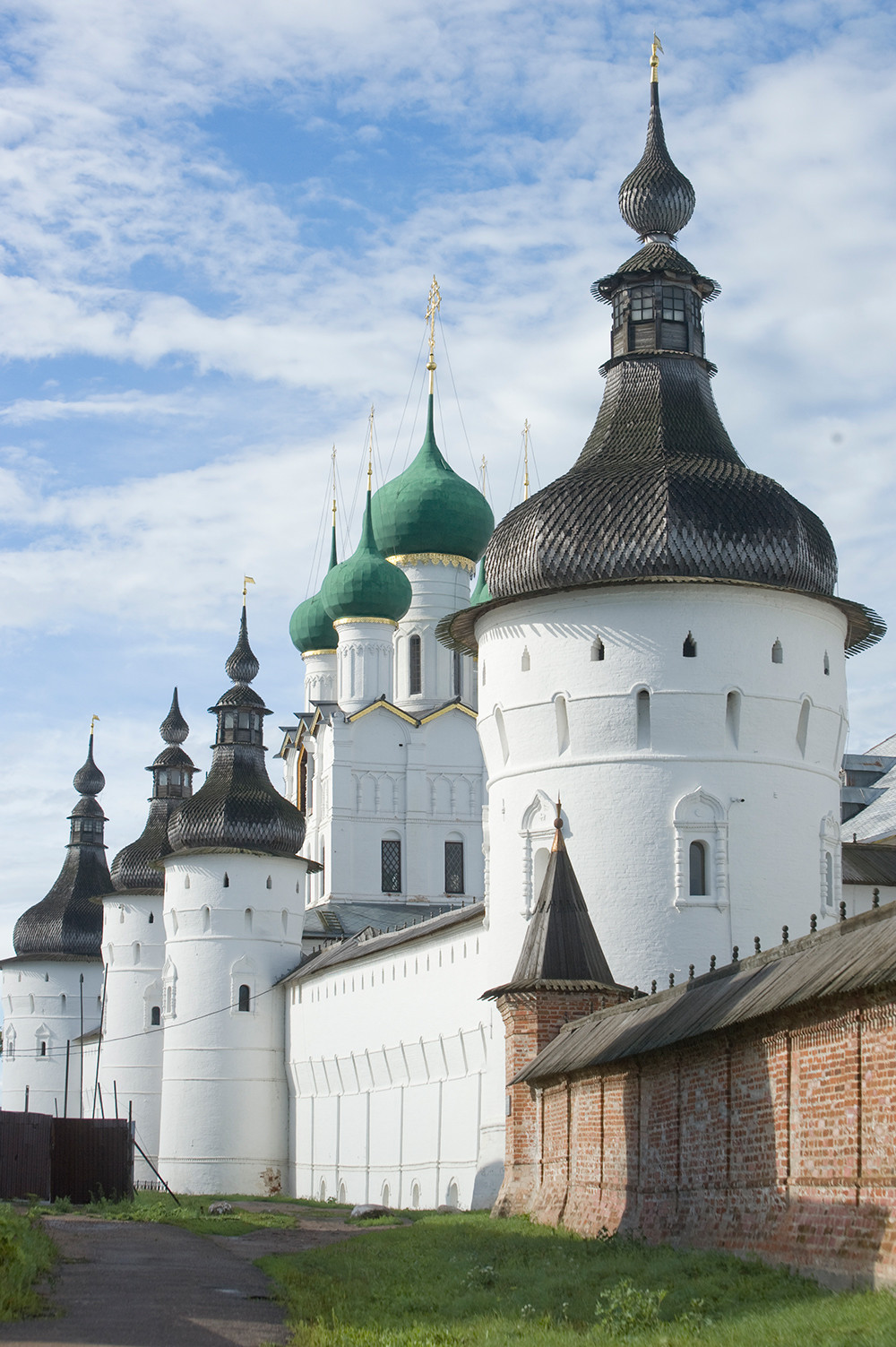 The ground level extends directly from the west wall with a large vaulted storage and service space. Attached to this level is a decorative porch (photographed by Prokudin-Gorsky) with a stairway leading from the courtyard to the main entrance on the west side of the church.

The ground floor also provides a visual platform for the next level, a complex three-part structure that projects from the church’s east wall. Known as an apse, this extension contains the main altar. 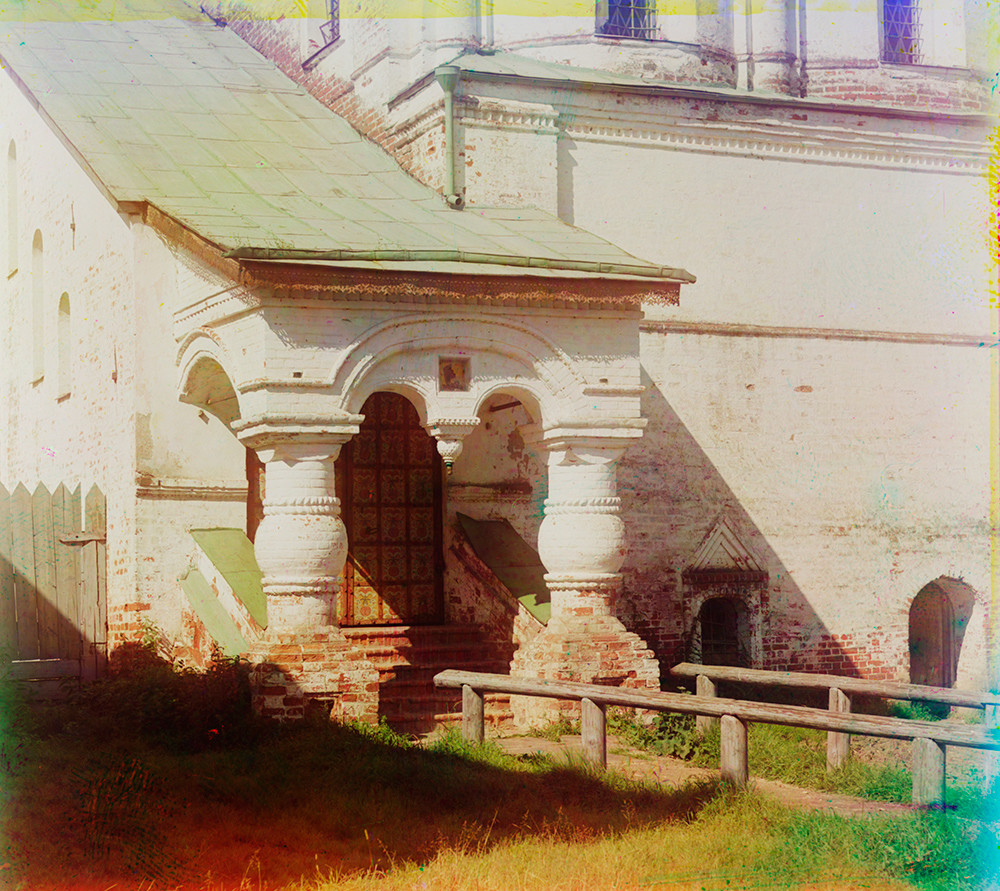 Each segment of the apse has a tall window crowned with an ornamental pediment. Above the windows a wide decorative frieze follows the contours of the three segments, each of which is capped with a pitched roof.

The east wall itself has a high arched frieze that echoes the great Dormition Cathedral next to the Metropolitan’s Court. The upper structure is capped with a picturesque articulated roofline that follows the brick gables. In the late 18th century, the roof was modified to a level surface visible in Prokudin-Gorsky’s photograph.

In August 1953, a terrifying storm swept through Rostov and caused immense damage to the historic center, including the destruction of church cupolas. In the aftermath a comprehensive plan to restore the kremlin to its 17th-century appearance was expertly supervised by Vladimir Banige. 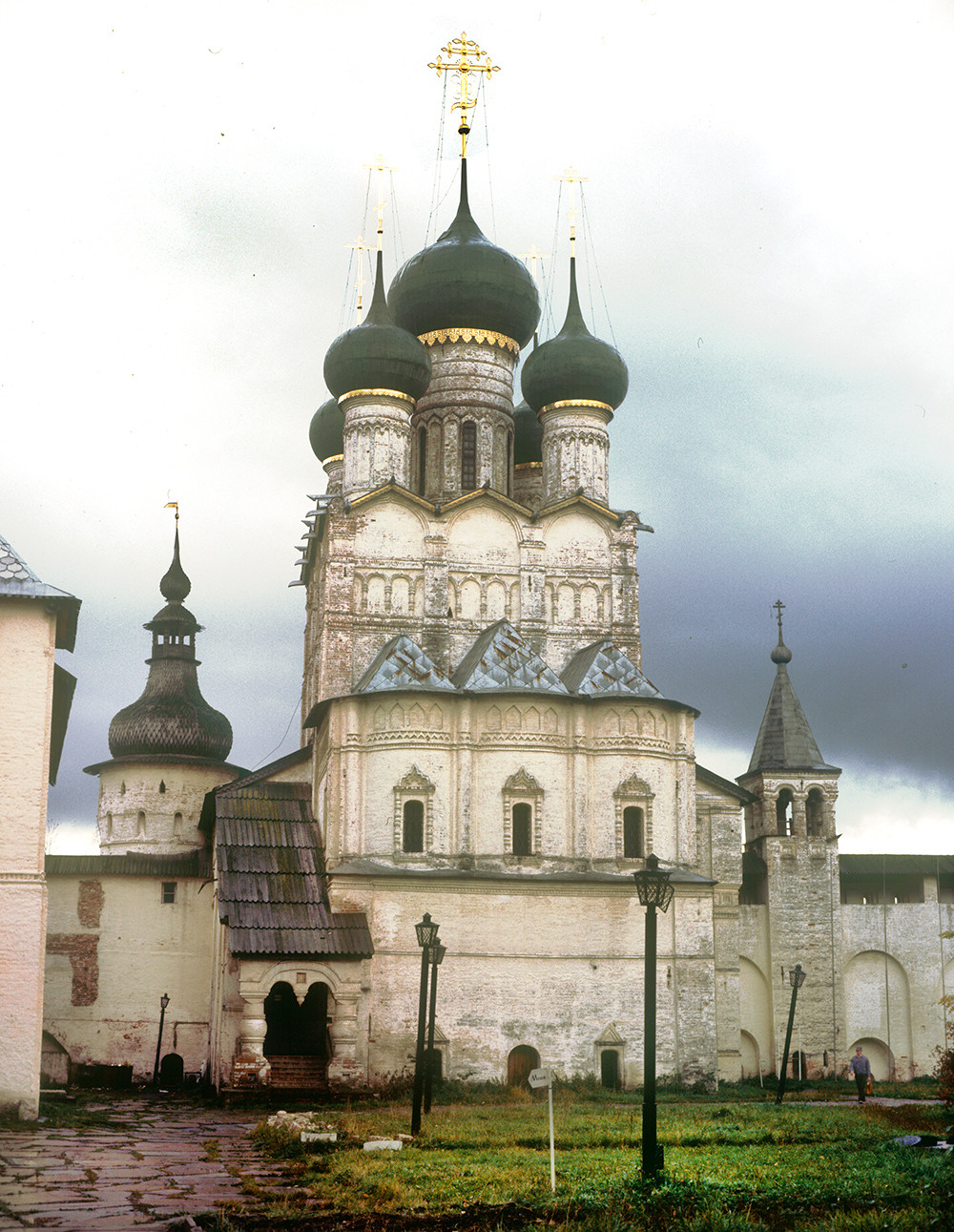 Among Banige’s major accomplishments was the recreation of the St. John Church’s gabled roofline (seen in my photographs), as well as its five flared cupolas. Resting on slender cylinders, the cupolas support a crown of soaring crosses.

Indeed, well before the 1953 storm, the St. John Church had a precarious history that included damage from fires in 1730 and 1758. As the functions of the Metropolitan’s Court waned in the latter 18th century, the St. John Church ceased to be use for worship in 1788 and was converted to storage for essentials such as salt and wine. In 1807, there was even a church proposal to dismantle the structure for building material, but local objections forstalled the destruction.

In 1831, a windstorm ripped the roof from the galleries that enclose the church on the north, south and west sides. This structural damage destroyed the ceiling vaults and the frescoes that had covered them. Repairs undertaken only in the 1860s proved inadequate. 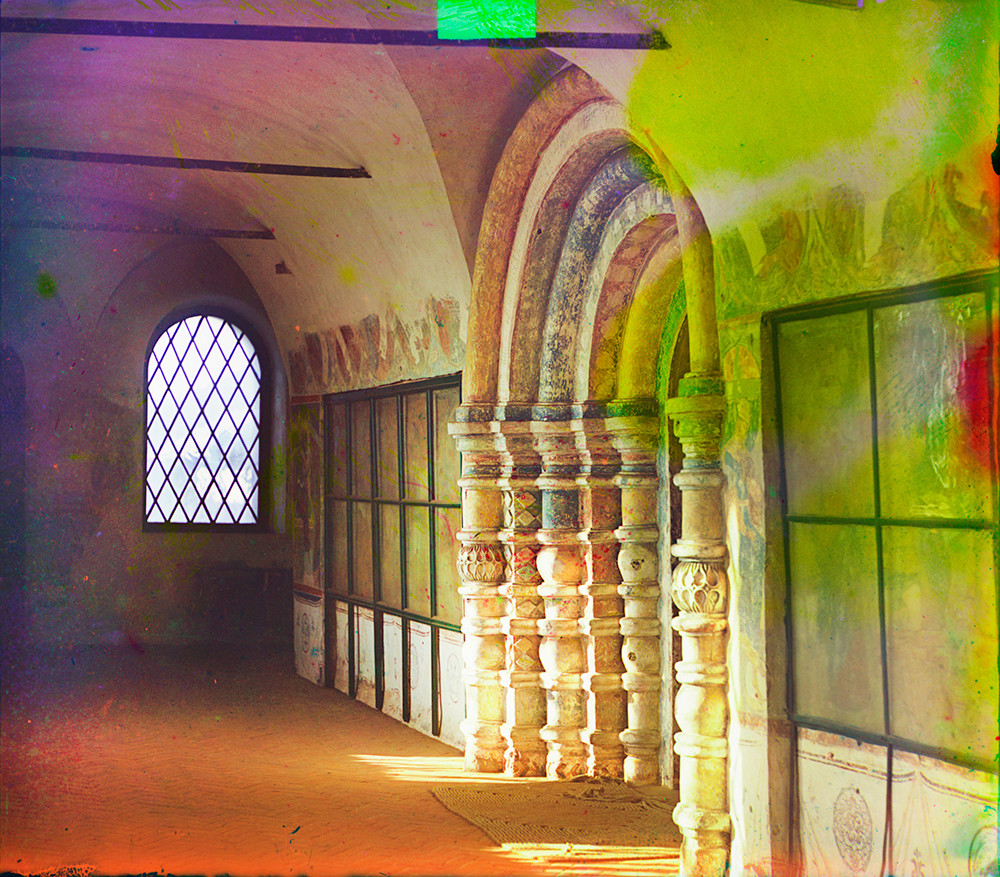 Fortunately, in the late 19th century Rostov merchants gathered funds to maintain the Metopolitan’s Court, which had severely deteriorated. In 1883, the White Chamber, built as a banquet hall for the Rostov Metropolitan, opened as a museum of church antiquities that was the predecessor of the current distinguished Rostov Kremlin Museum.

A view from the inside

Despite a serious effort to restore the St. John Church in the late 19th century, the frescoes that had covered the gallery walls were either destroyed or severely damaged. Prokudin-Gorsky’s photograph of the main portal in the west gallery shows a bare ceiling as well as protective screens over fresco fragments on either side of the portal. Little could be rescued, yet the colorfully decorated portal remained, as my 2019 photograph shows. 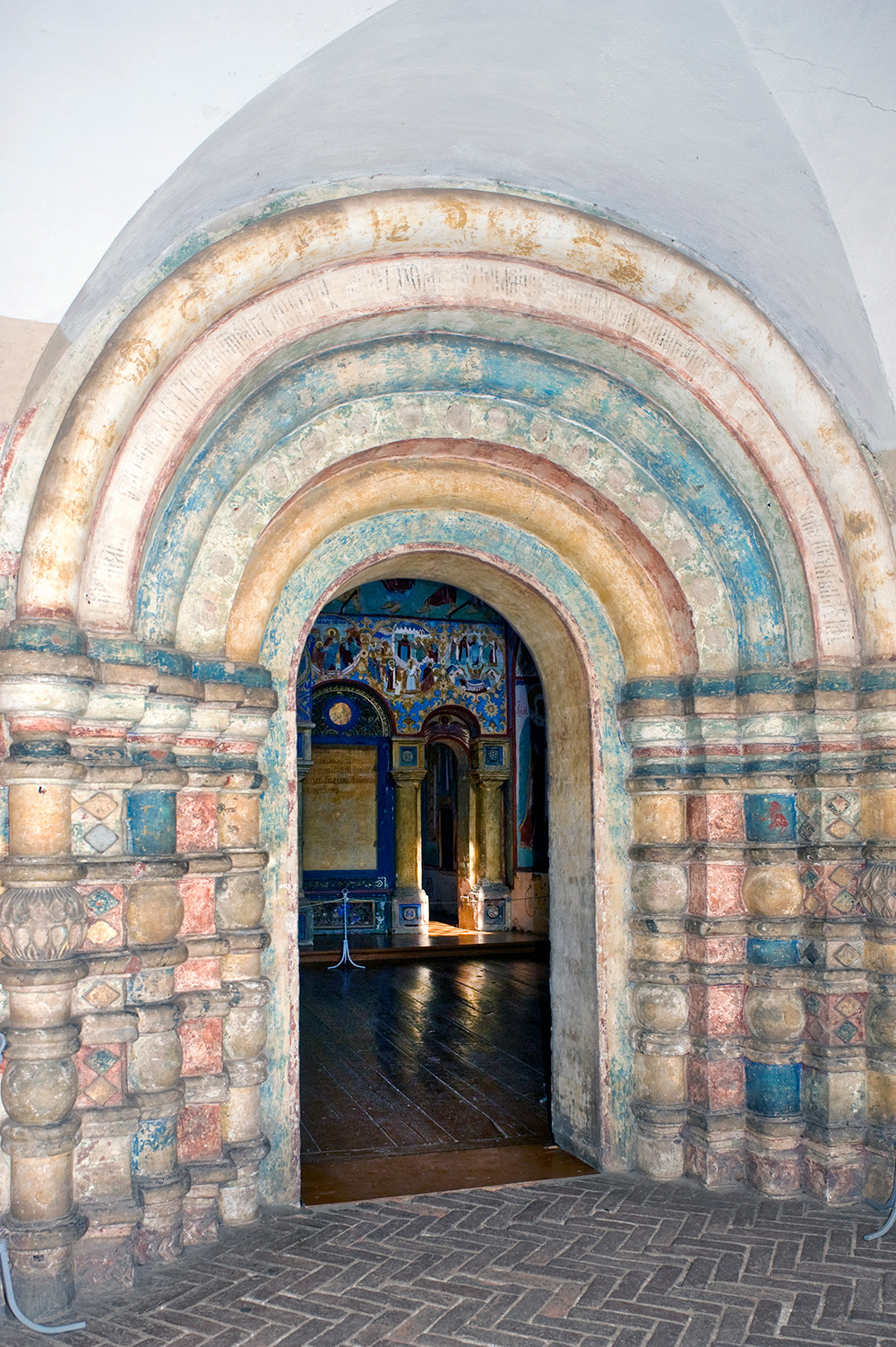 In sharp contrast to the faded gallery frescoes, the frescoes on the main interior space — originally painted in 1683 — have largely survived. There is no evidence that Prokudin-Gorsky photographed this space, but in view of the frescoes’ exceptional importance and state of preservation, I have included a general view of the upper walls. 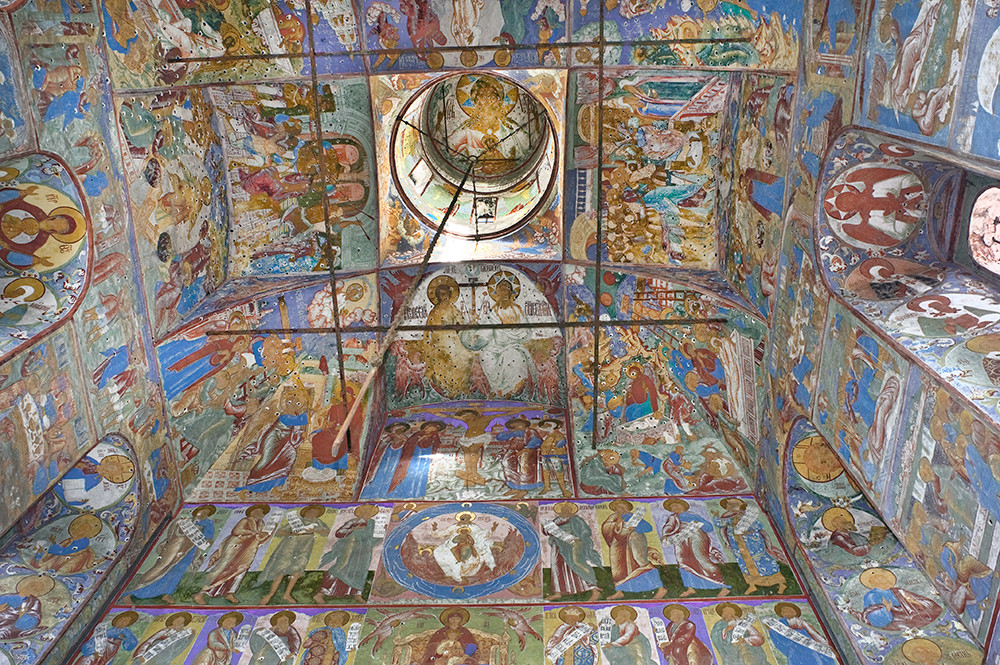 The dome in the center contains a representation known as “Paternitas”: Father, Son and Holy Spirit. On the drum beneath the dome are archangels and Prophets. The transition to the ceiling vaults displays the four evangelists: Matthew, Mark, Luke and John.

The ceiling vaults display a large representation centered on the theme “Symbols of the Faith” and surrounded by images of the Passion of Christ. The east wall replicates the rows of a Russian icon screen. The dozens of panels on the other three walls depict scenes from the life of St. John and St. Avraamy, one of the first missionaries in the Rostov lands. 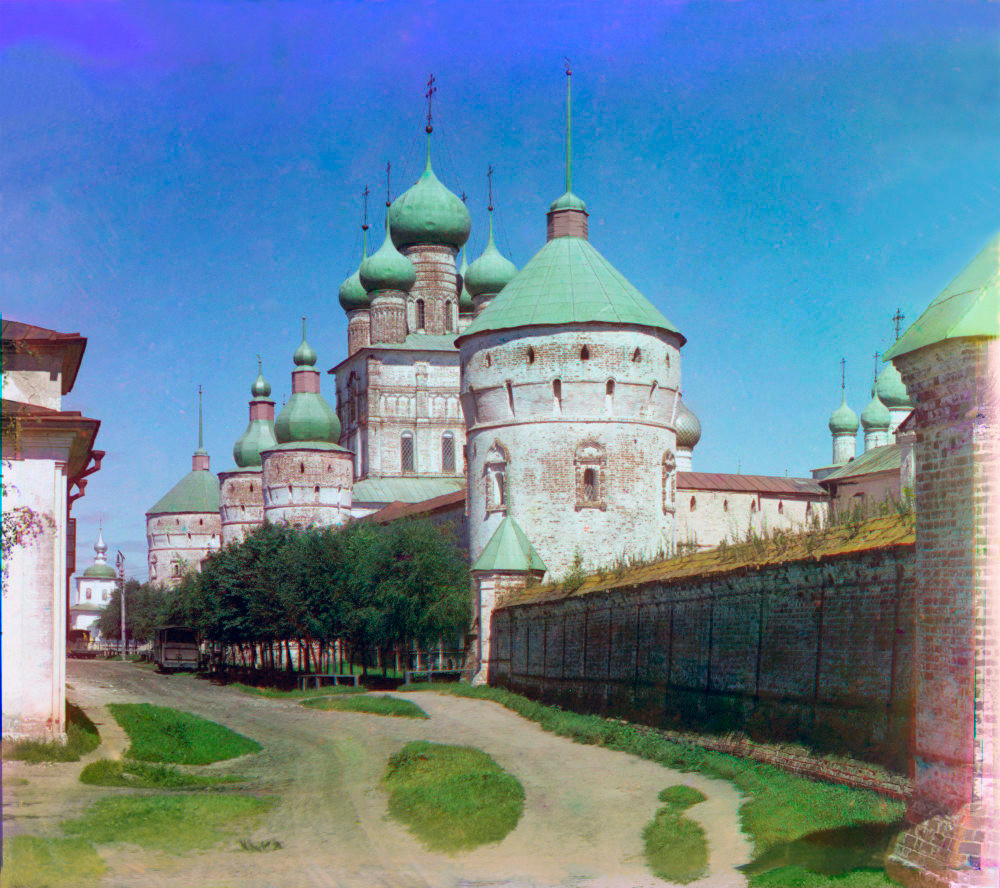 These remarkable frescoes were presumably painted by master artists from Yaroslavl, as were fresco cycles in other Rostov kremlin churches sponsored by Metropolitan Jonah. Their preservation in the face of so many daunting challenges provides inspiration to visitors throughout the world. 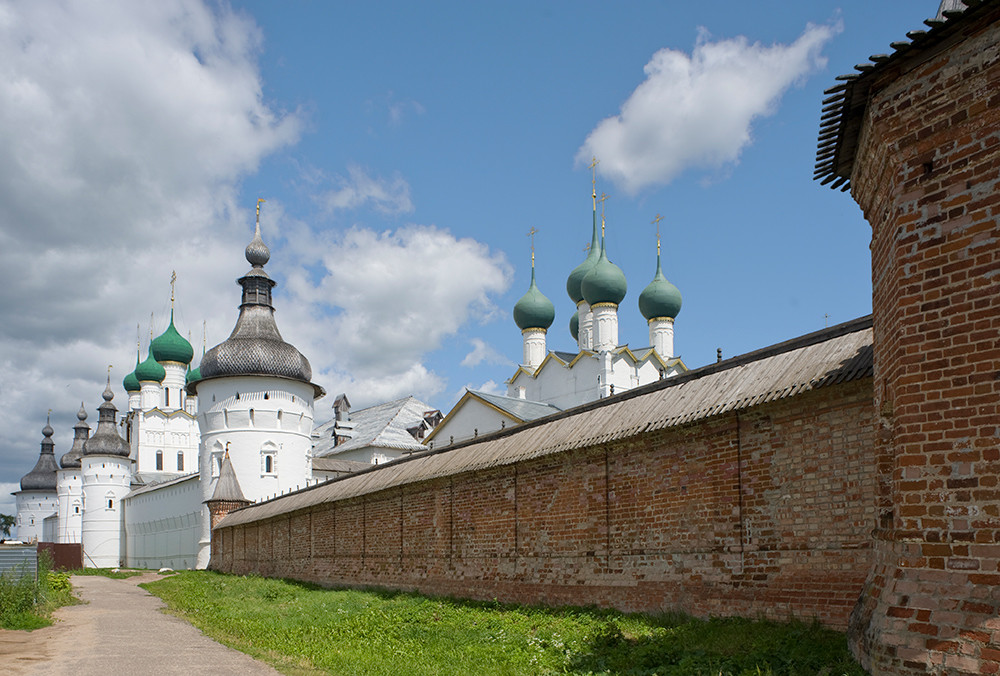