The Cathedral of Rostov the Great: Reclaiming Russia’s past 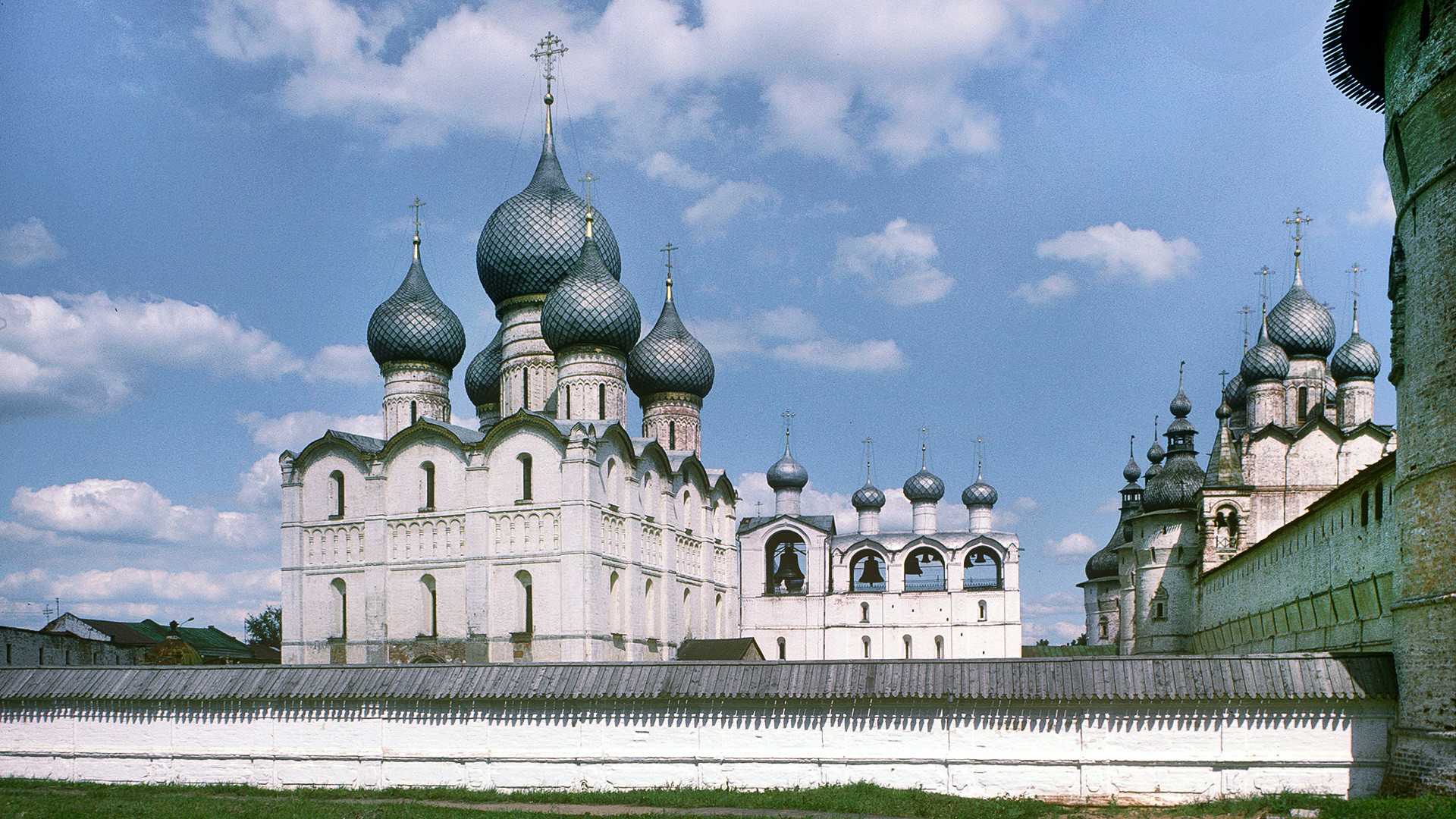 Rostov, often referred to as “the Great” (Rostov Veliky) to distinguish it from the southern city Rostov-on-Don, is one of the earliest historically attested towns in Russia. Located some 130 miles northeast of Moscow, the town benefits from a superb natural setting on the north shore of Lake Nero.

In Summer 1911, the Russian chemist and photographer Sergei Prokudin-Gorsky visited the town during one of his journeys to chronicle the diversity of the Russian empire in the early 20th century. As usual in the medieval period, Rostov’s architectural ensemble is gathered around a grand cathedral. Especially evocative in this regard is Prokudin-Gorsky’s general view of the town center from a bell tower that no longer exists. My photographs of Rostov were taken over a span of three decades from 1988 through 2019. 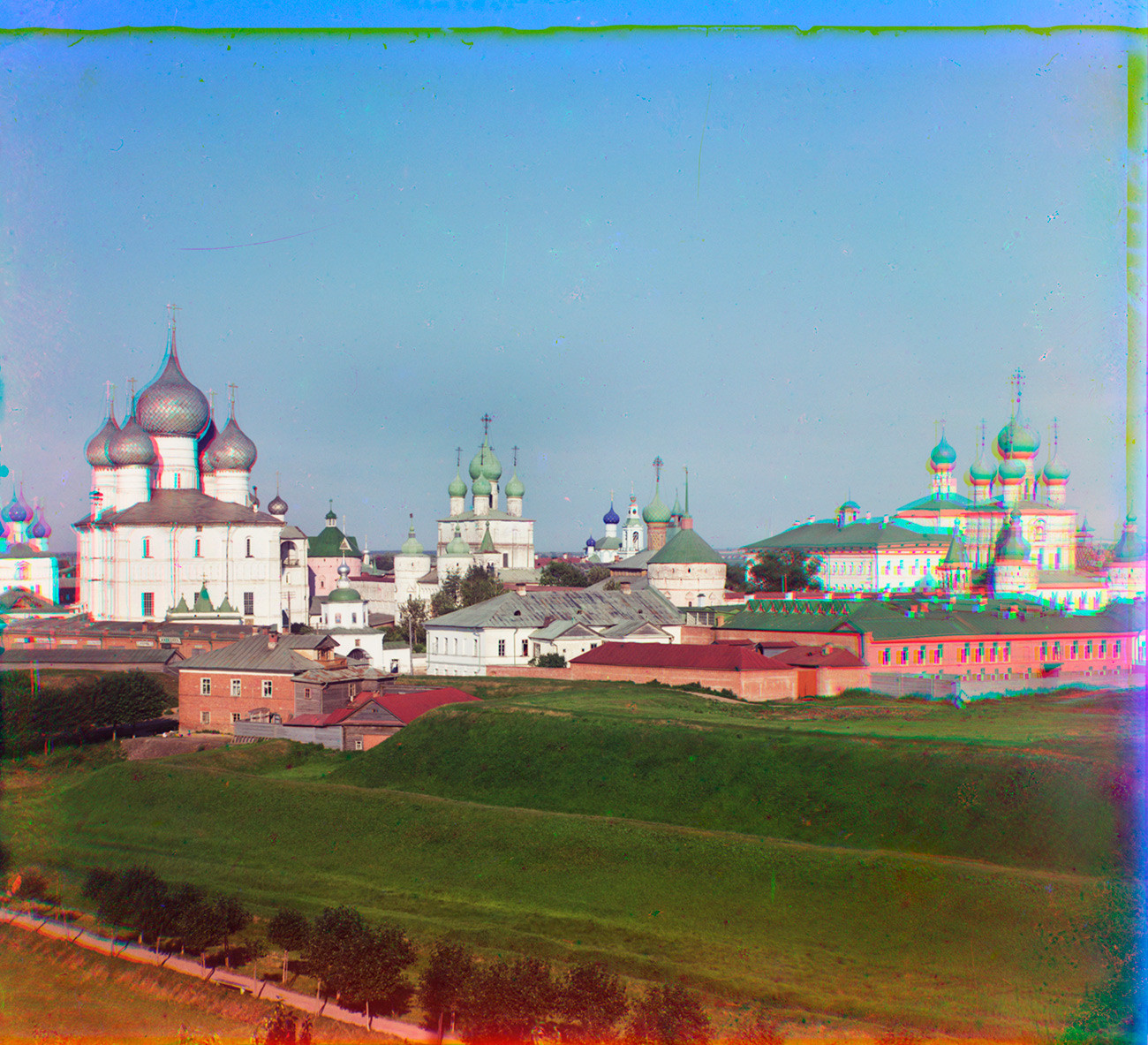 Rostov is first mentioned under the year 862 in the ancient chronicle "Tale of Bygone Years." Throughout the 10th century, Slavic settlers — primarily from the Novgorod lands — moved into this area, which was already inhabited by Finno-Ugric tribes.

In 988 Prince Vladimir of Kiev, the Christianizer of Russia, gave the Rostov lands to one of his sons, Yaroslav, a major figure who subsequently became known as "the Wise."  By the middle of the 11th century, the Rostov lands had passed to Yaroslav's son Vsevolod, and Christian missionaries such as Leonty of Rostov intensified their attempt to convert a largely pagan local population. For his efforts, Bishop Leonty was martyred in the early 1070s. 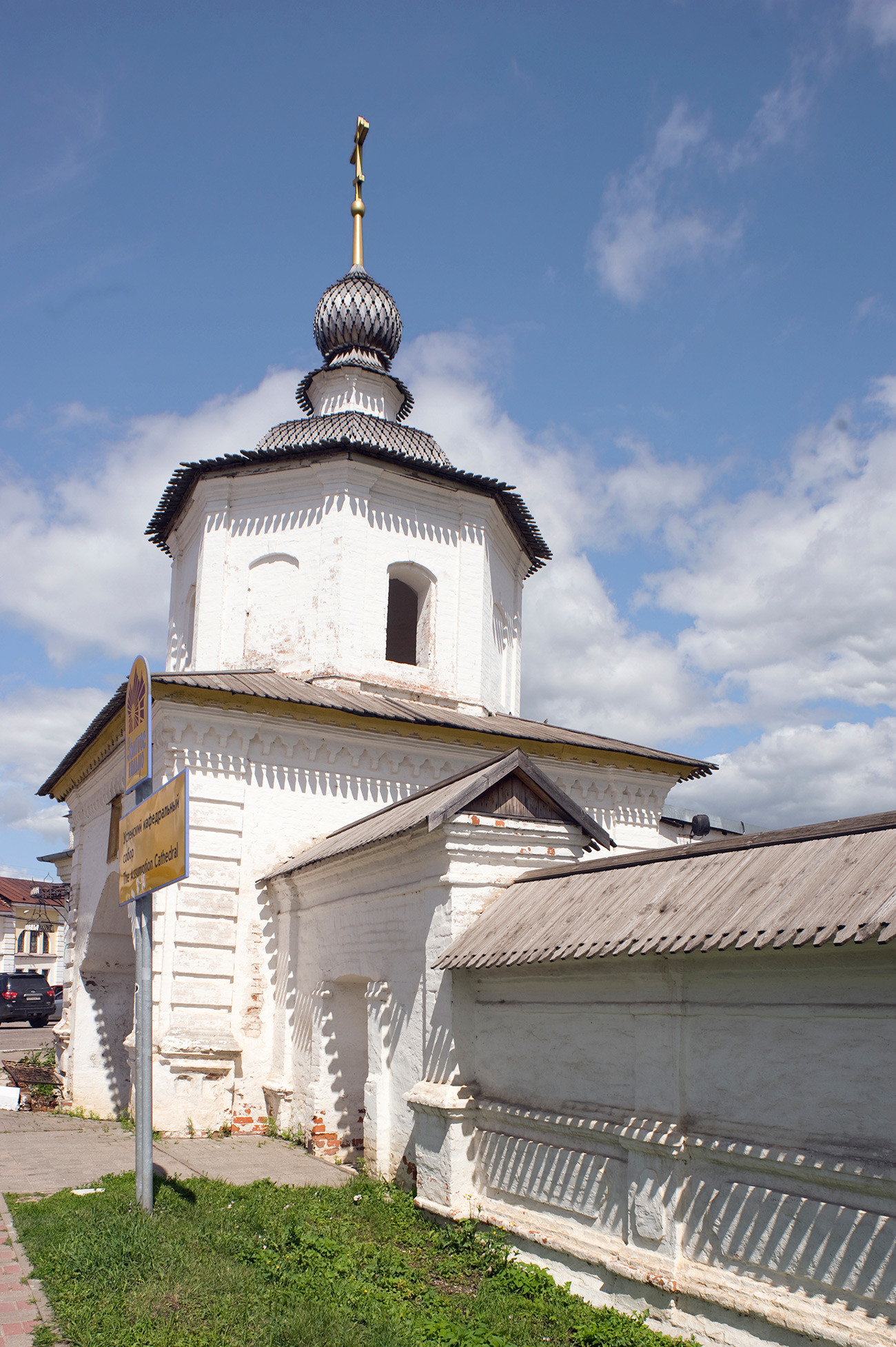 The consolidation of church authority was symbolized in the mid-12th century by Prince Andrei Bogolyubsky's Cathedral of the Dormition of the Virgin Mary, rebuilt by Prince Konstantin Vsevolodovich in the 1220s. Although Rostov was captured during the Mongol invasion of 1237-38, the cathedral and monasteries remained largely intact.

Following the invasion, Rostov gained importance through church institutions during a time of widespread devastation. In the 14th century, Rostov served as a center of religious learning and missionary activity, producing such pioneers as St. Stephan of Perm and Epiphanius the Wise. 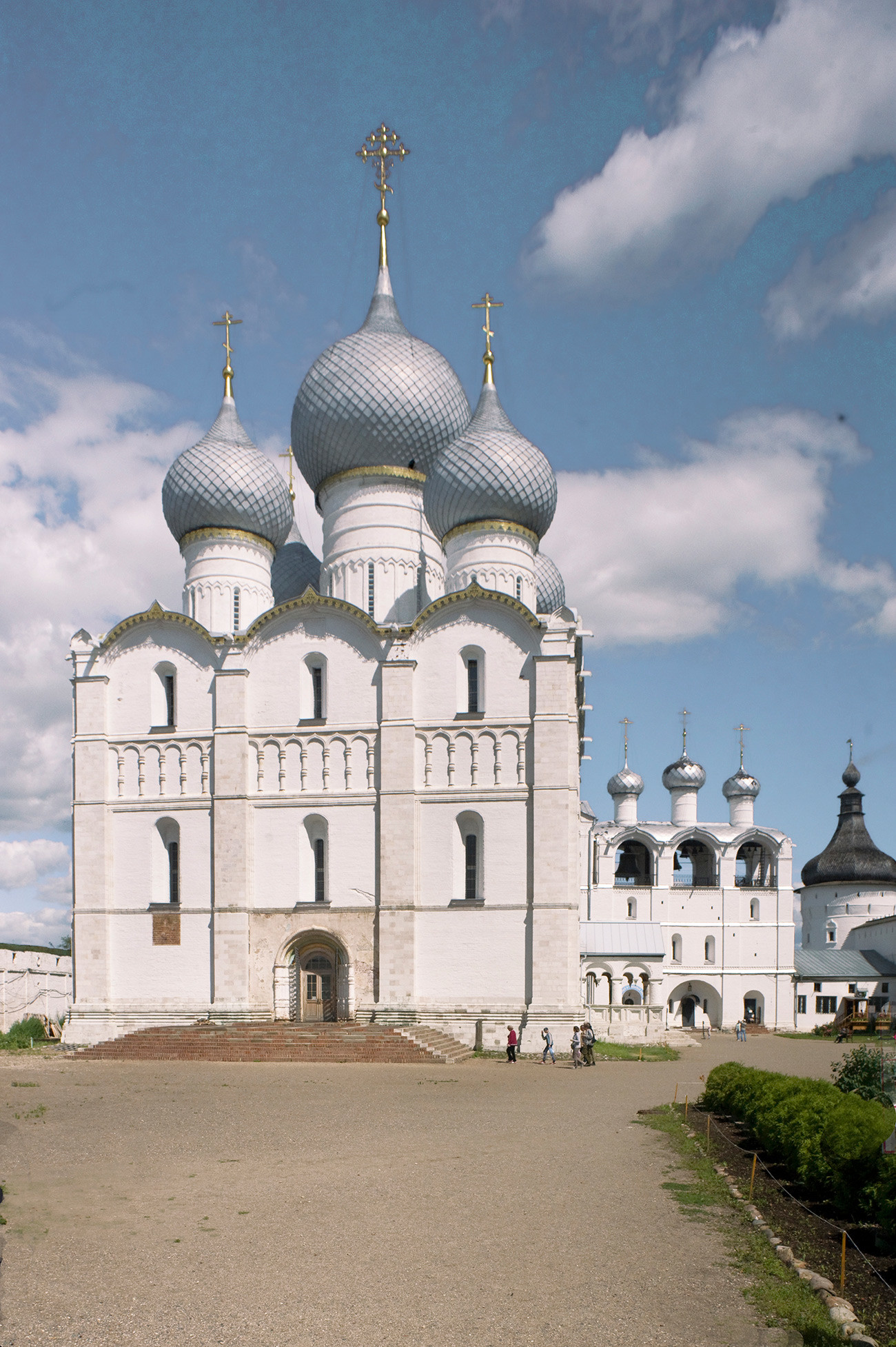 A rebuilding of the Dormition Cathedral after a fire in 1408 prolonged the life of the limestone structure. Yet construction innovations emanating from Italian architects in the Moscow Kremlin in the late 15th and early 16th centuries led to a new wave of major church building. The fundamental reconstruction of the Rostov Cathedral on the site of the earlier limestone versions was an event of much significance. Begun perhaps in the reign of Ivan III and continued by Vasily III in the early 16th-century, the new Rostov cathedral was modeled on the Dormition Cathedral in the Moscow Kremlin. In this way, the Rostov cathedral reflected the dominant political position of Moscow and its desire to enhance the ancient centers of Russian religious culture. 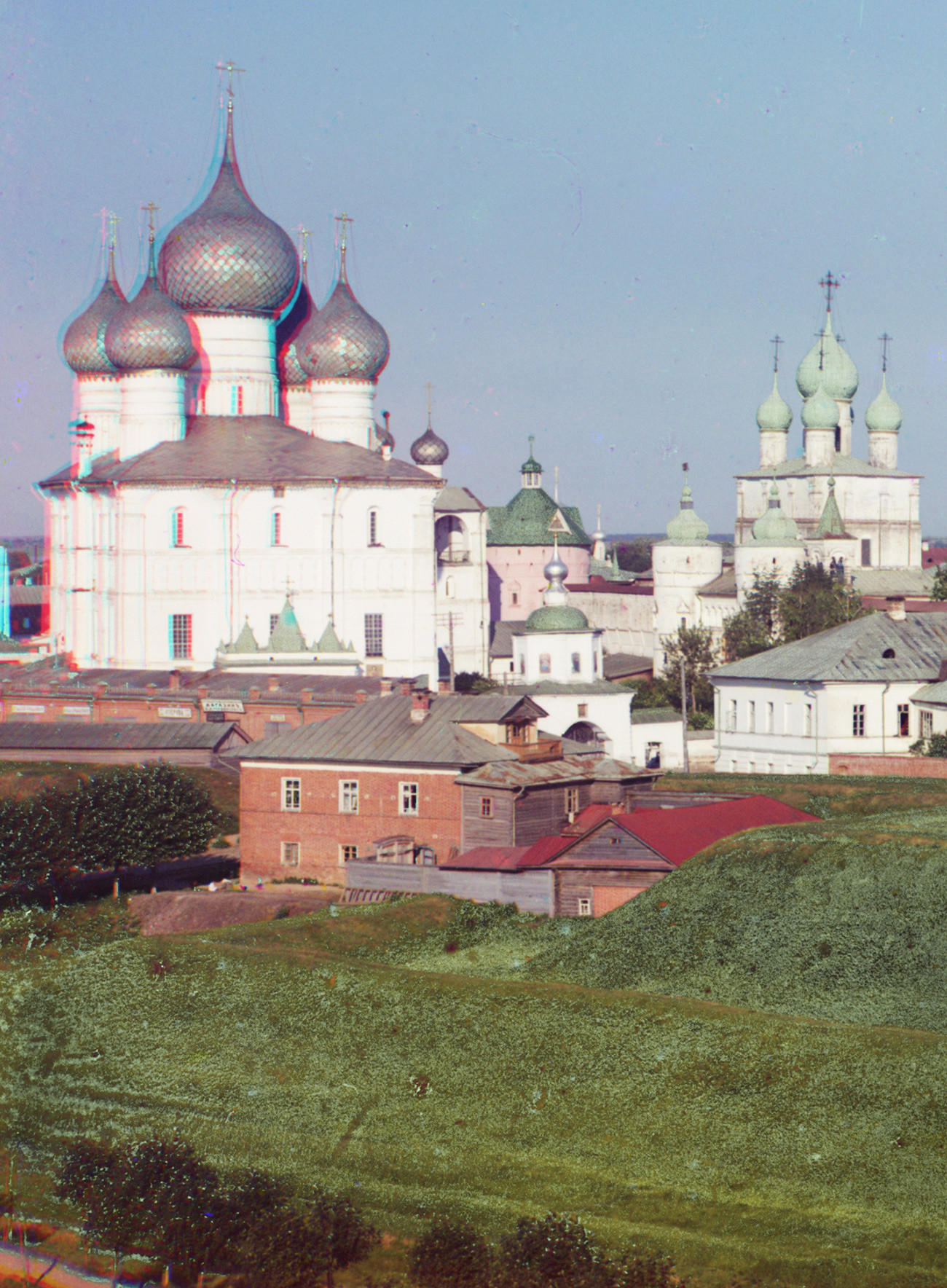 Unlike its Moscow predecessor, whose walls were of cut limestone blocks, the walls of the Rostov Dormition Cathedral were built of brick on a limestone base, with limestone pillars used only to delineate the four bays (sections) of the facades. Otherwise, the Rostov cathedral bore a clear resemblance to the Moscow model, which was itself based on the late 12th-century Dormition Cathedral in Vladimir.

All three of these monuments have a large arcade frieze extending along the center of the facades. The bays of each façade culminate in curved gables known as zakomary. The structures are crowned with five cupolas elevated on drums, and the interior of each cathedral has six massive piers (or columns in the case of Moscow) that support the roof vaults.

Although the rebuilding of the Rostov cathedral is usually dated to 1508-12, some specialists have proposed that the structure was enhanced in the late 1580s. At this time Rostov's stature as a religious center increased due to its elevation from an episcopate to a metropolitanate in 1589. 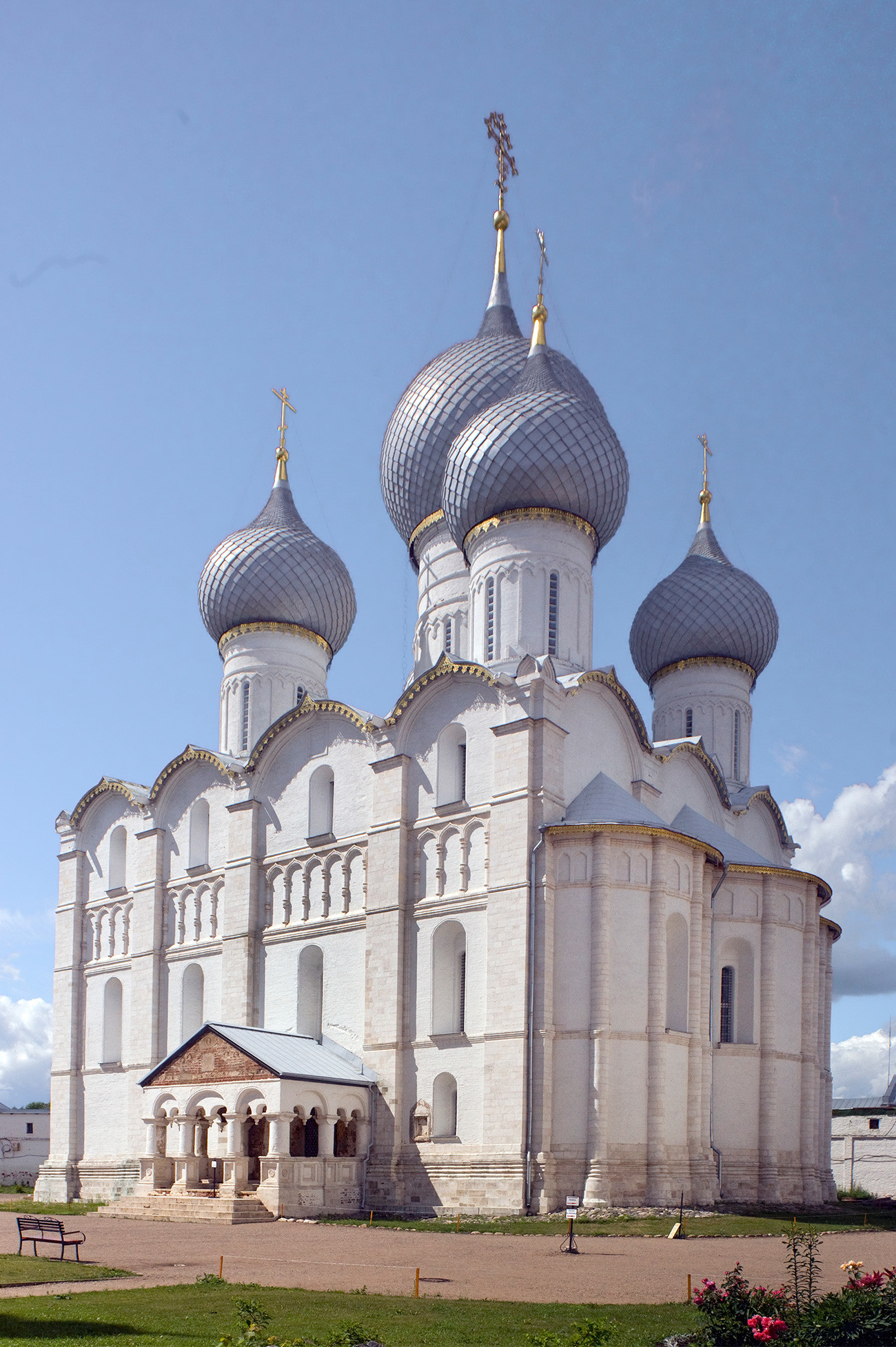 At the same time, Ecumenical Patriarch Jeremias II of Constantinople and a council of Orthodox Patriarchs agreed to bestow the status of Patriarch on the leader of the Russian Orthodox Church. The Russian Church, centered in Moscow, thus gained full and final authority to manage its affairs.

Although Rostov was sacked by Polish forces in 1609 during the dynastic crisis known as the Time of Troubles, it regained its place as a cultural and economic center in northeastern Muscovy. The magisterial Dormition Cathedral played a significant role in maintaining this status.

Rostov’s greatest architectural transformation occurred in the second half of the 17th century with the construction of its “kremlin,” a grandiose project initiated by a dynamic church leader, Jonah Sysoevich (ca. 1607-90). The son of a country priest, Jonah rose through the monastic structure in Rostov and in 1652 was appointed Metropolitan of Rostov by the newly elected Patriarch Nikon.

Situated a short distance from the new kremlin walls, the Dormition Cathedral served as a visual “anchor” for the Metropolitan's Court (as the kremlin was formally known). The visual transition from the cathedral to the kremlin ensemble was provided by one of Russia’s greatest belfries (zvonnitsa), erected in two phases between 1682-89. 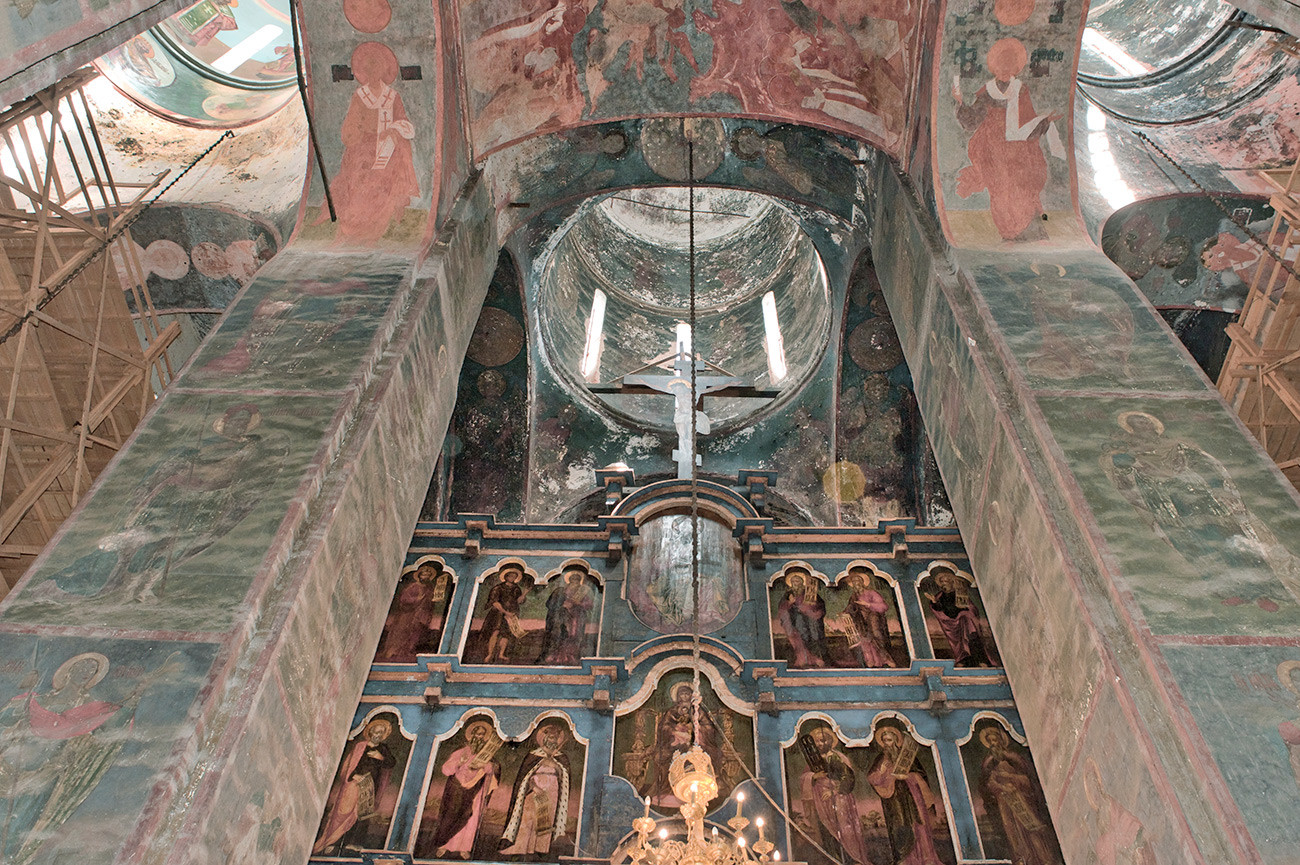 In the late 17th century, the Dormition Cathedral’s low hemispherical cupolas were replaced by the magnificent flaring onion domes that matched the crowns of Jonah’s new kremlin churches, such as the nearby Church of the Resurrection over North Gate. Prokudin-Gorsky was able to photograph the two shrines together, a view that I replicated several decades later. Including the cross above the central dome, the height of the cathedral reached nearly 200 feet.

As with many other large Russian churches, the Dormition Cathedral’s original curved roofline was replaced with a simpler sloped roof visible in Prokudin-Gorsky’s photographs. My photographs show the post-war restoration to the earlier roofline that followed the contours of the semicircular zakomary gables.

On the interior, the cathedral walls were painted with frescoes, the earliest of which were done around 1589. A full painting of the vast interior walls was begun in 1659 by a group of artists under the direction of Joseph Vladimirov, a painter from Yaroslavl who worked in the Moscow Kremlin. A decade later this group was joined by the noted masters Gury Nikitin and Sila Savin.

Unfortunately, much of this interior work was damaged by a fire in 1671 and further obscured by a retouching in 1779 and a capital repainting in 1843. Additional damage occurred during the Soviet period, although restoration efforts in the 1950s uncovered fragments of the 17th-century frescoes. 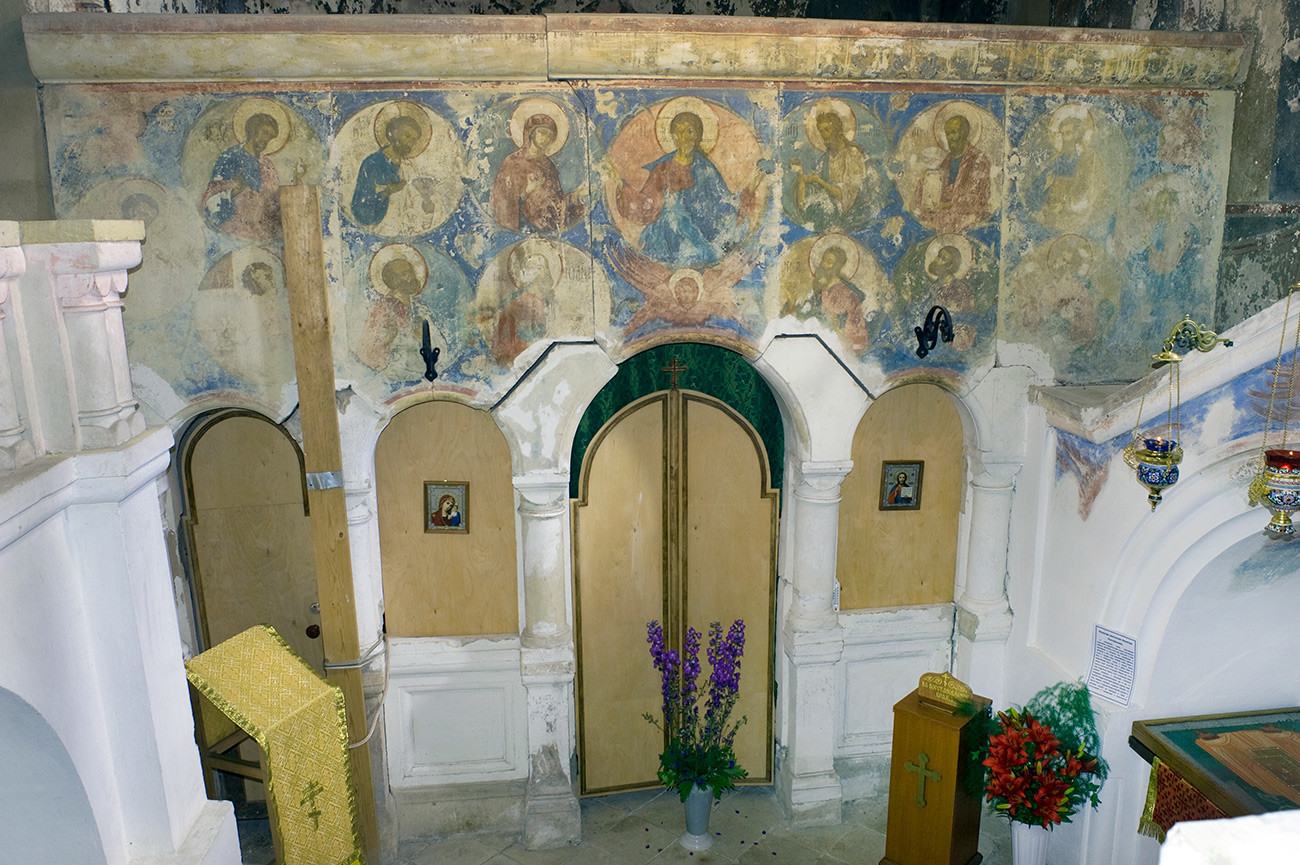 A process of extensive cleaning and restoration of the interior walls has only recently begun. One of the first results is the Chapel of St. Leonty, located on the south side and containing the martyred bishop’s relics.

The interior’s most visible element is a towering Baroque icon screen crafted in the 1730s and 1740s. During the same period the cathedral territory, or compound, was enclosed with a low brick wall entered through a small tower known as the Holy Gate. 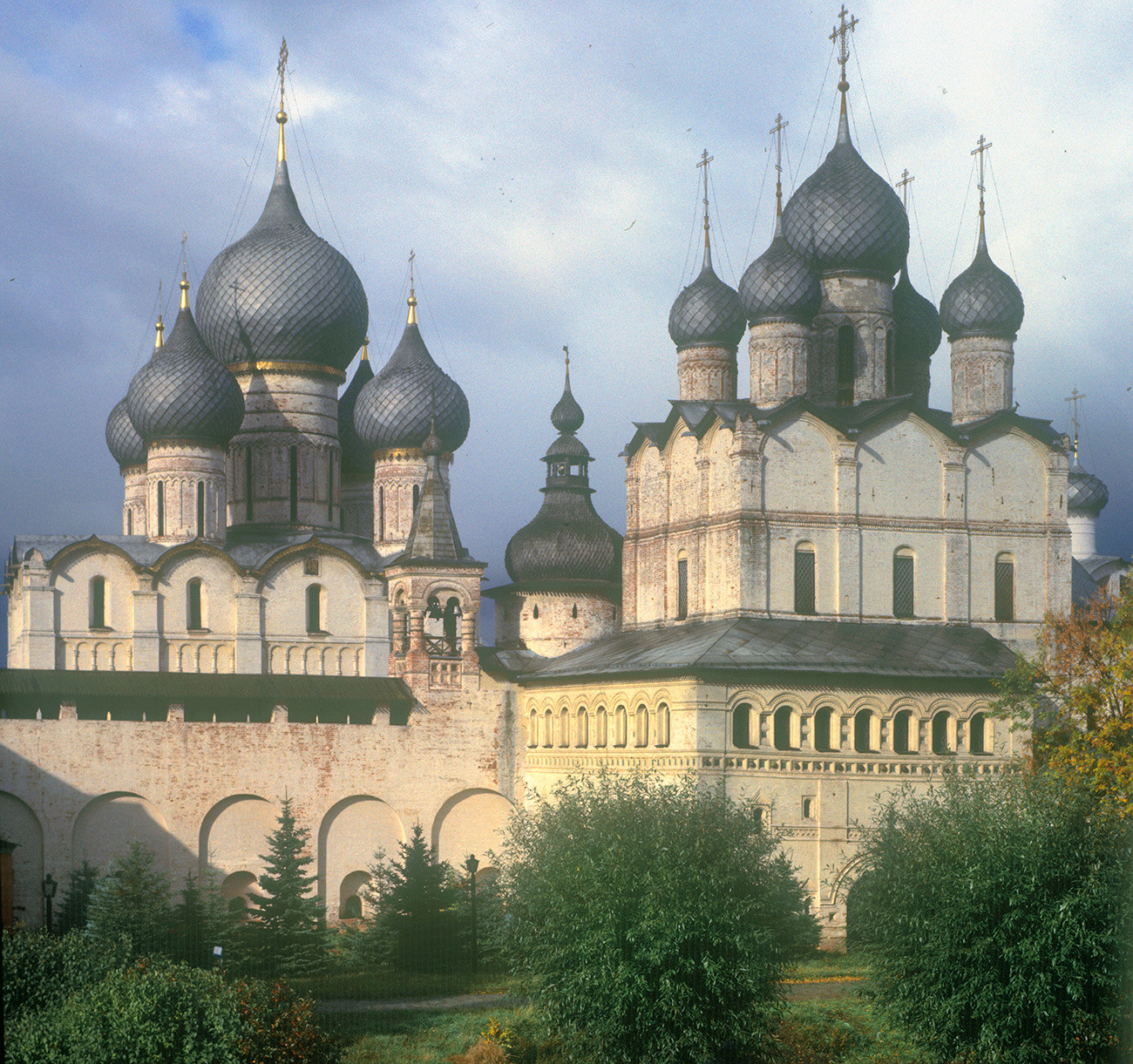 During the 18th century, Rostov's status diminished, and in 1788, the Rostov metropolitanate was abolished. Rostov's decline became so severe that in the 19th century the church considered razing many buildings in Jonah's kremlin and turning the rest into warehouses for the adjacent trading rows.

Fortunately, one of the earliest preservation groups in Russia rallied during the second half of the 19th century to save the great works of art and architecture. Rostov became a symbol of the conservation of Russia's medieval culture, including the Dormition Cathedral. 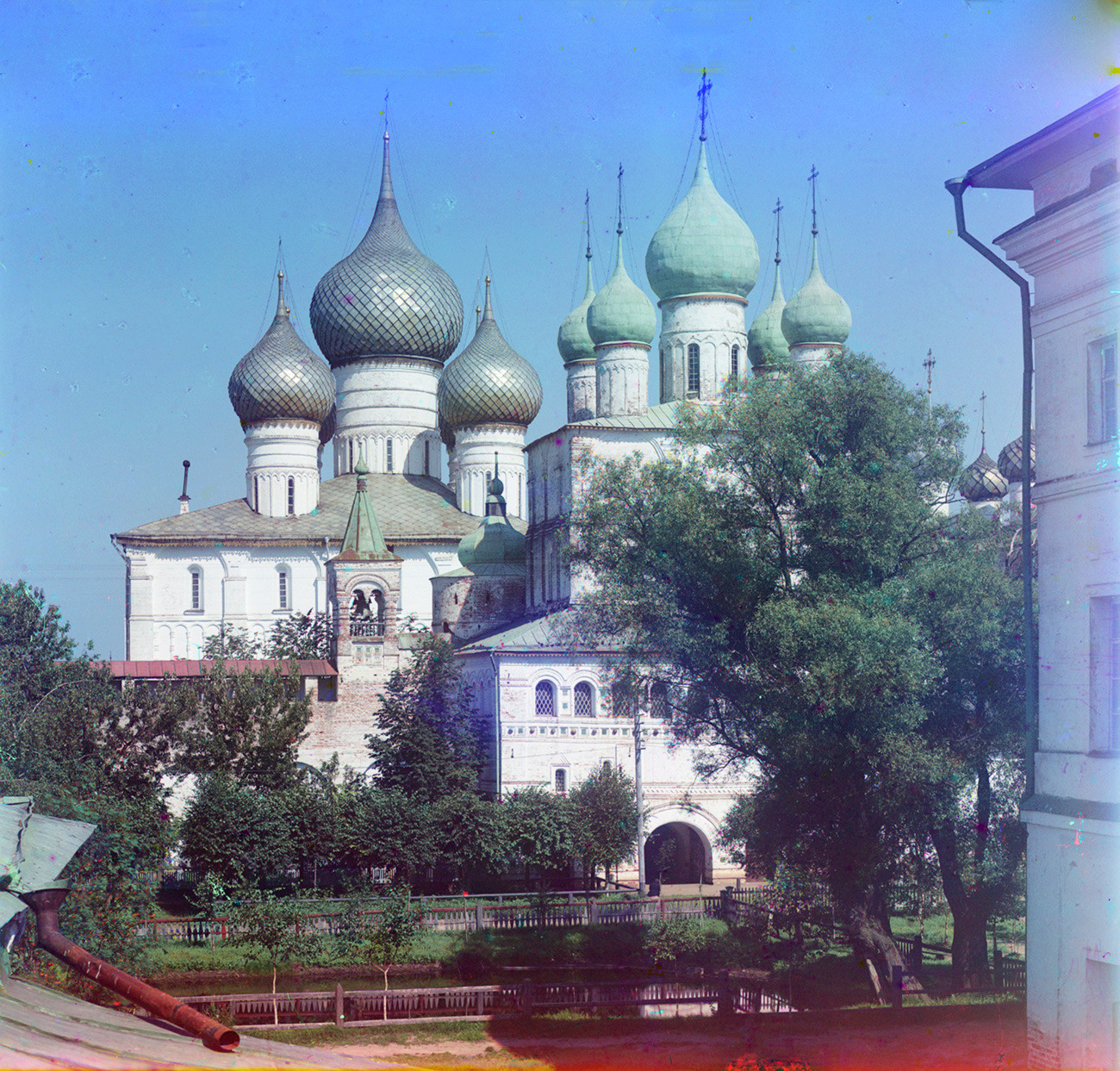 With the establishment of Soviet power, the Dormition Cathedral was relegated to parish use and then closed altogether. The large interior was used for various purposes, including workshops.

In 1953, a storm caused tremendous damage to the city and destroyed most of the large 17th-century cupolas. Restoration experts rallied to repair both the cathedral and the kremlin under the supervision of Vladimir Banige, a leading specialist in Rostov’s cultural heritage.

The Dormition Cathedral and the cathedral belfry were returned to the Orthodox Church in 1991. The prolonged, painstaking process of restoration has begun after decades of neglect and will likely extend for many years to come. 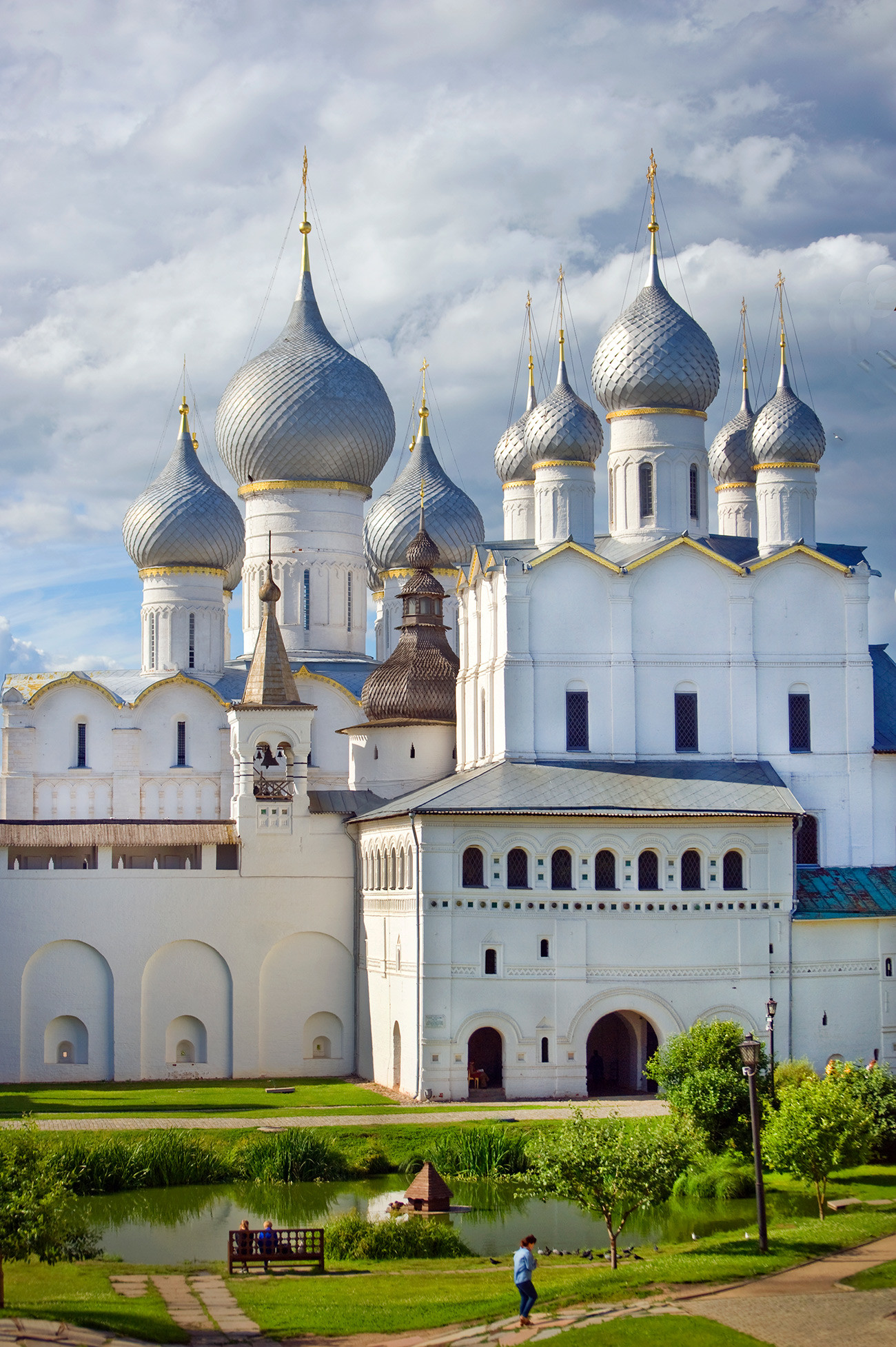