Travel
William Brumfield
In Kolomna, there is an ensemble whose distinctive walls and towers stand in sharp contrast to surrounding buildings. 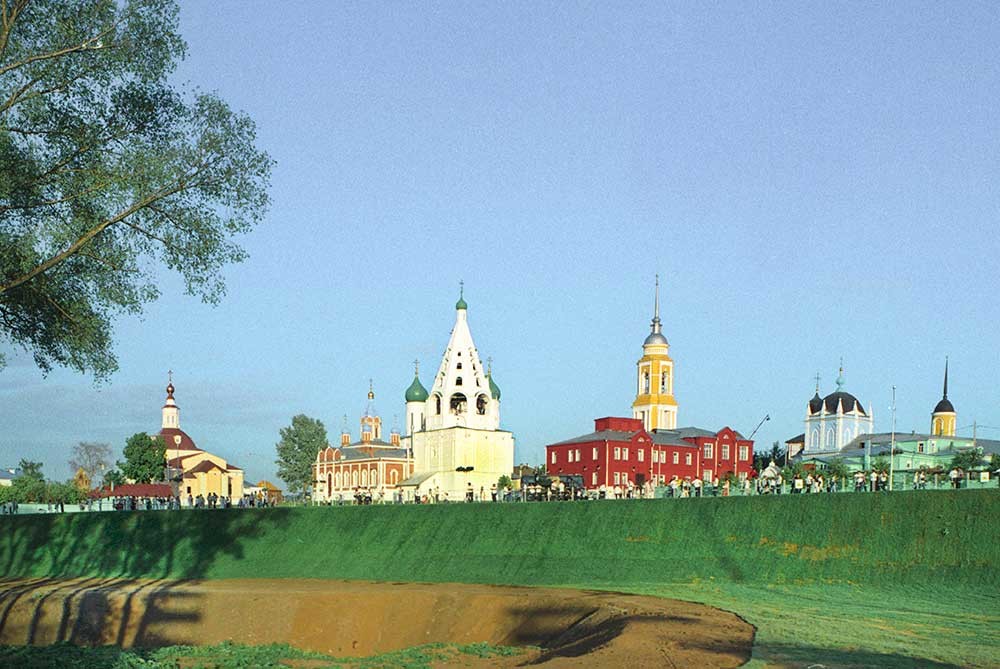 Kolomna panorama, northwest view. From left: Church of Resurrection in the Fortress, Church of Tikhvin Icon of the Virgin, Bell tower & Dormition Cathedral, School No. 3, bell tower of New Golutvin Trinity Convent, Church of Intercession at New Golutvin Convent. May 24, 2007.

At the beginning of the 20th century, the Russian chemist and photographer Sergei Prokudin-Gorsky developed a complex process for vivid, detailed color photography. His vision of photography as a form of education and enlightenment was demonstrated with special clarity through his photographs of architectural monuments in historic sites throughout the Russian heartland.

Among the sites visited by Prokudin-Gorsky in 1912 was the town of Kolomna, located some 70 miles south of Moscow. My photographic work in the Kolomna region occurred over a period of more than two decades beginning in 1992. 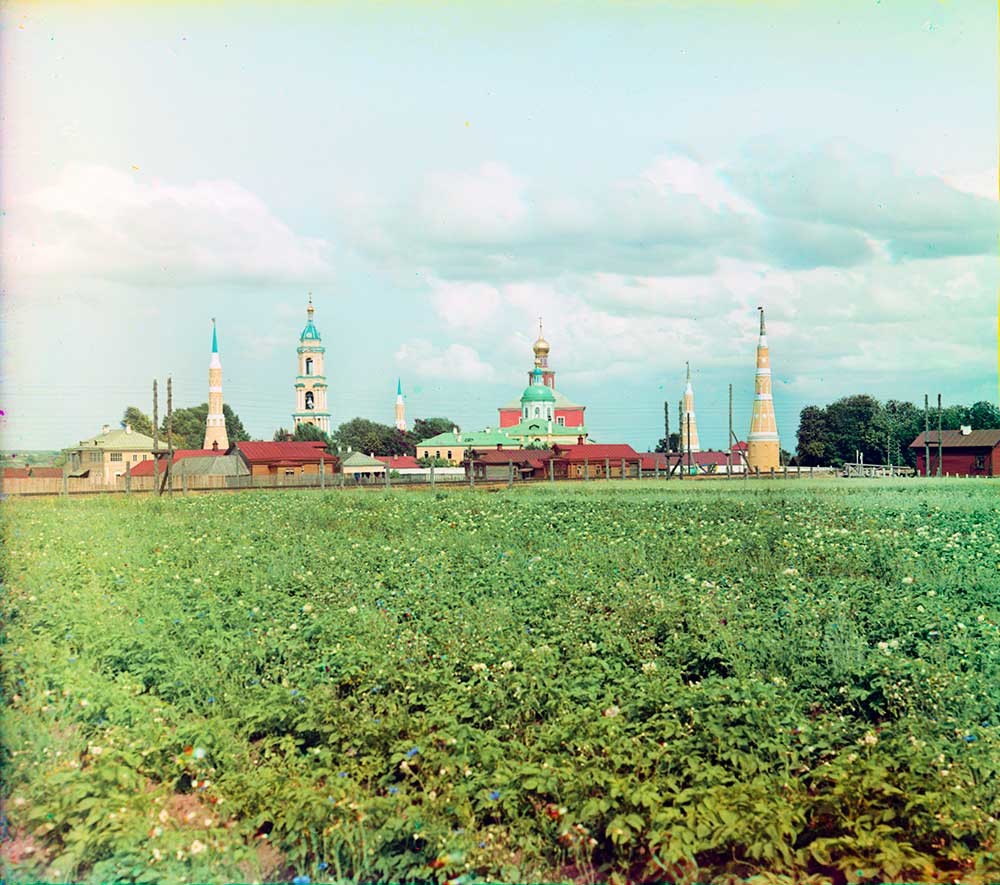 Kolomna is one of the most appealing of Russia’s provincial centers. Its monasteries, which create the historic silhouette of the town, are being restored, and its many merchant houses from the early 19th century endow it with a neoclassical charm.

The earliest mention of Kolomna in medieval chronicles refers to a clash in 1177 between Vsevolod of the Great Nest, Grand Prince of Vladimir, and his rival prince Gleb of Ryazan. Within the vast space of medieval Rus, such struggles among principalities were frequent in the 12th and early 13th centuries. 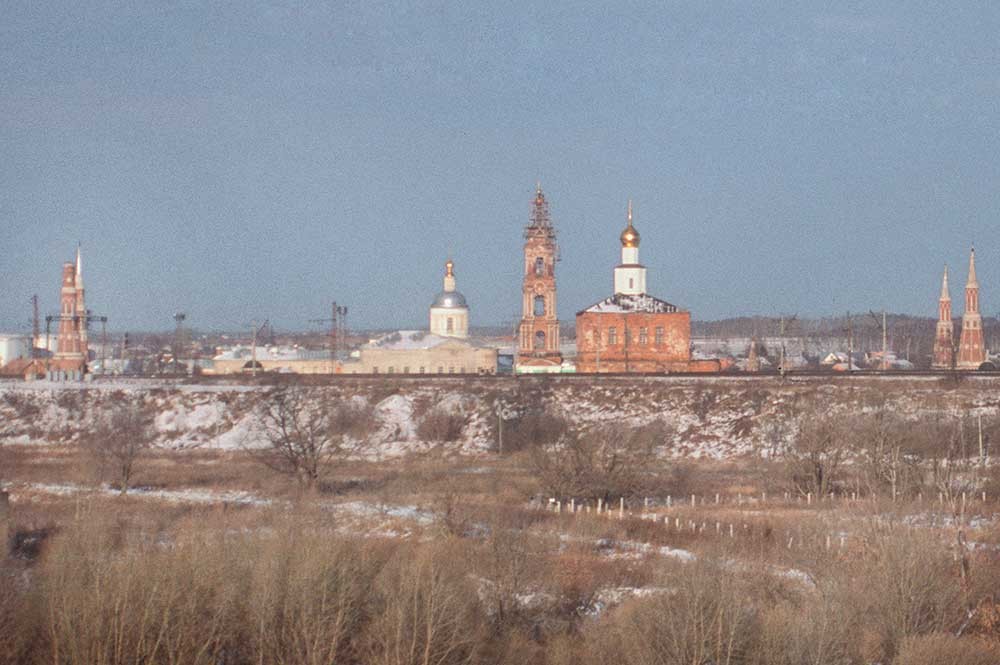 These regional conflicts were, however, dwarfed by the far more devastating Mongol invasion of 1237-41. Overwhelmed in the initial wave of attacks, Kolomna was ravaged in 1237, although not without fierce resistance. Kulkan, the youngest son of Genghis Khan, was killed during the battle for Kolomna.

From the beginning of the 14th century, Moscow’s princes valued Kolomna as a strategic citadel guarding its southern border. Located not far from the point where the Moscow River flows into the Oka (the major western tributary of the Volga), Kolomna was traversed by trading routs from much of central Russia. This movement of goods through the town would create the basis for a lasting merchant culture. 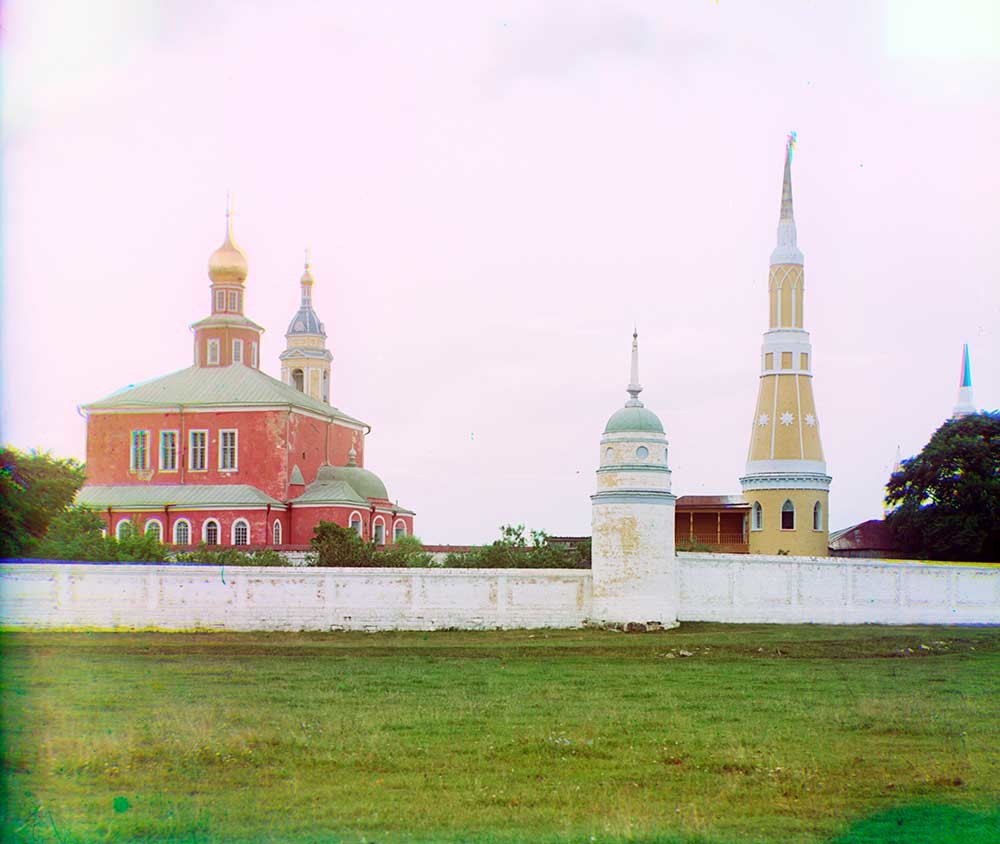 Despite its increasing prosperity, Kolomna experienced a full measure of catastrophes in the 14th century, including an outbreak of plague in 1363 and looting by the army of Tatar khan Tokhtamysh in August 1382. Yet Kolomna proved its resilience in 1379 with the construction of its first large church, dedicated to the Dormition of the Virgin. It was in the shadow of this church — since completely rebuilt — that Moscow’s grand prince Dmitry Donskoi held a prayer service in preparation for the great battle against the Tatar khan Mamai at Kulikovo Pole in September 1380.

Monasteries off the beaten path

Curiously, there is no evidence that Prokudin-Gorsky photographed Kolomna itself. Instead, he proceeded to the town’s southern outskirts near the main rail line in the direction of Ryazan. 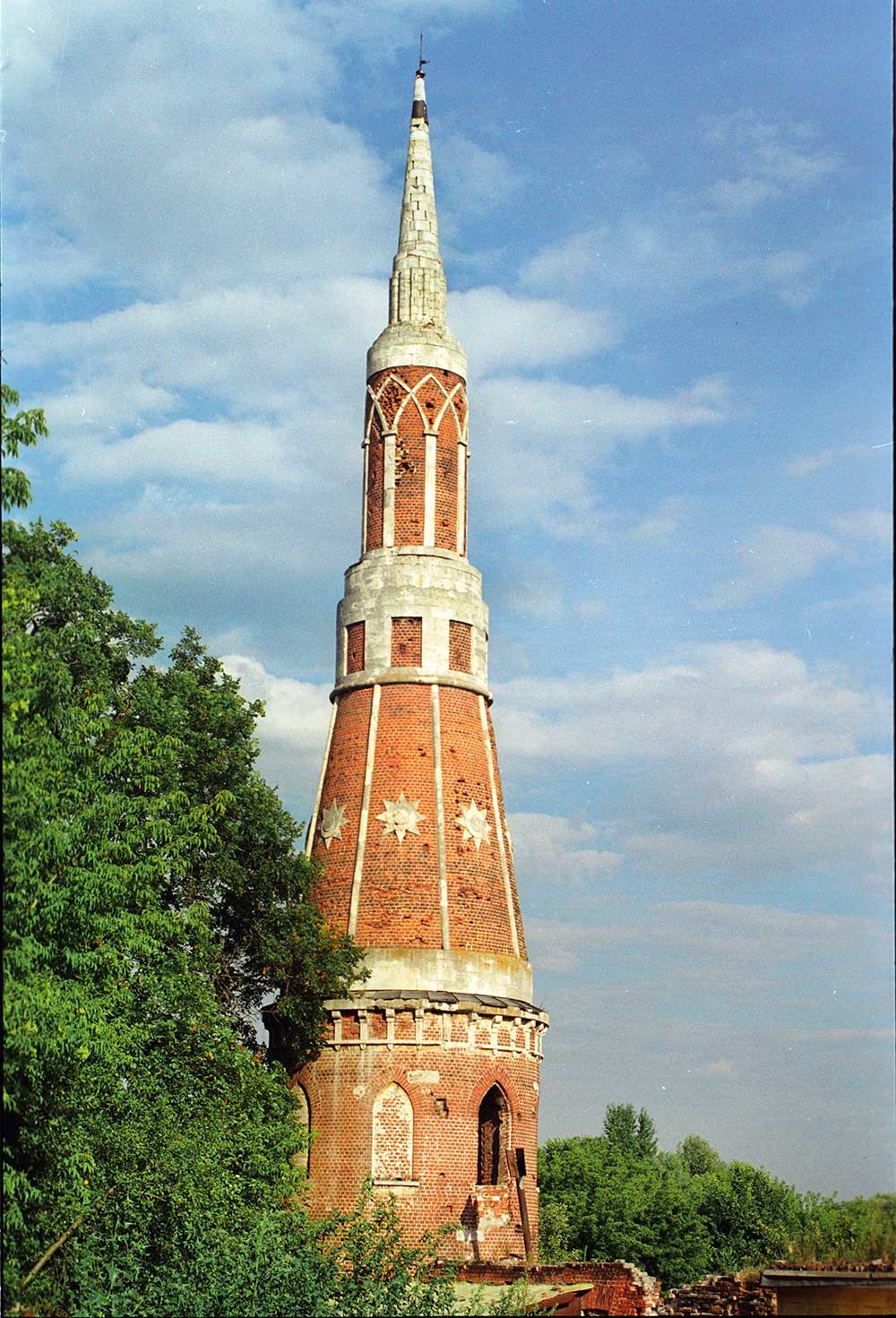 There, at the village of Golutvin, he took several views of the Epiphany-Golutvin Monastery (known after 1800 as Old Golutvin Monastery).  At the time of his summer visit the monastery was picturesquely situated it the midst of a large, flowering potato field. His photographs demonstrate a fascination with this unusual architectural ensemble.

The Golutvin monastery was founded by Grand Prince Dmitry Donskoy of Moscow in or around 1384. By the end of the 14th century, it apparently already had a small masonry church. 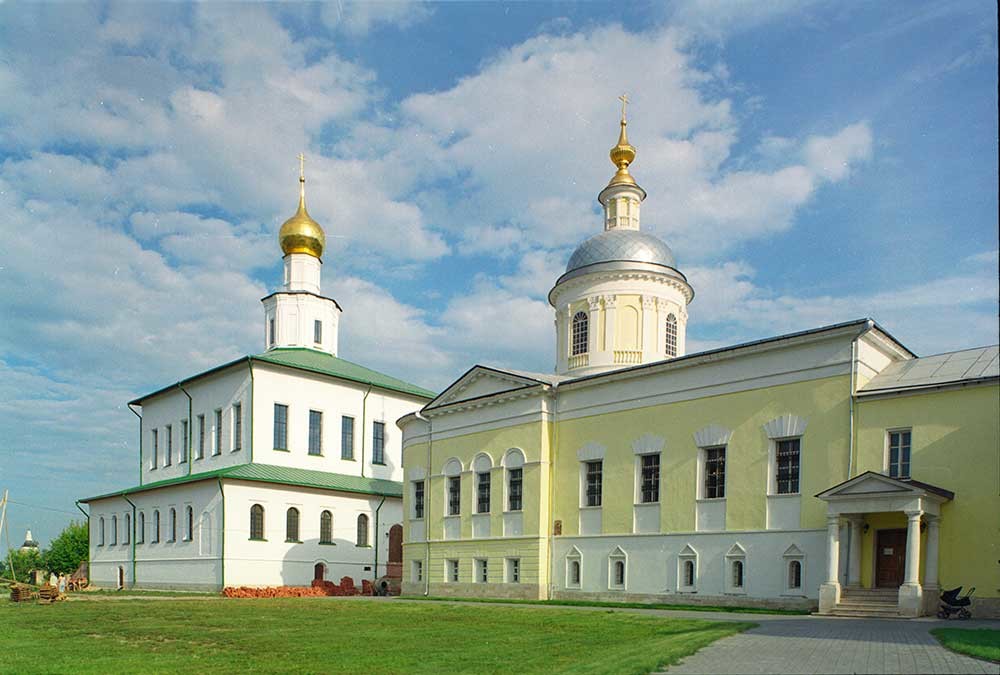 The monastery’s earliest surviving structure is the Epiphany Cathedral, whose walls date from 1700-01 with major modifications in the 18th century. Ascetic in design, the cathedral has one small cupola and sparse decorative detail on the facades. Its large windows, however, flood the interior with light to a degree atypical of Russian churches.

In 1800, the formal status of Old Golutvin Monastery was diminished, and it was placed under the administration of the Bobrenev Nativity of the Virgin Monastery on the northern outskirts of Kolomna, Indeed, the Golutvin name was appropriated by the Trinity Convent in the center of Kolomna — the “New Golutvin” Monastery. 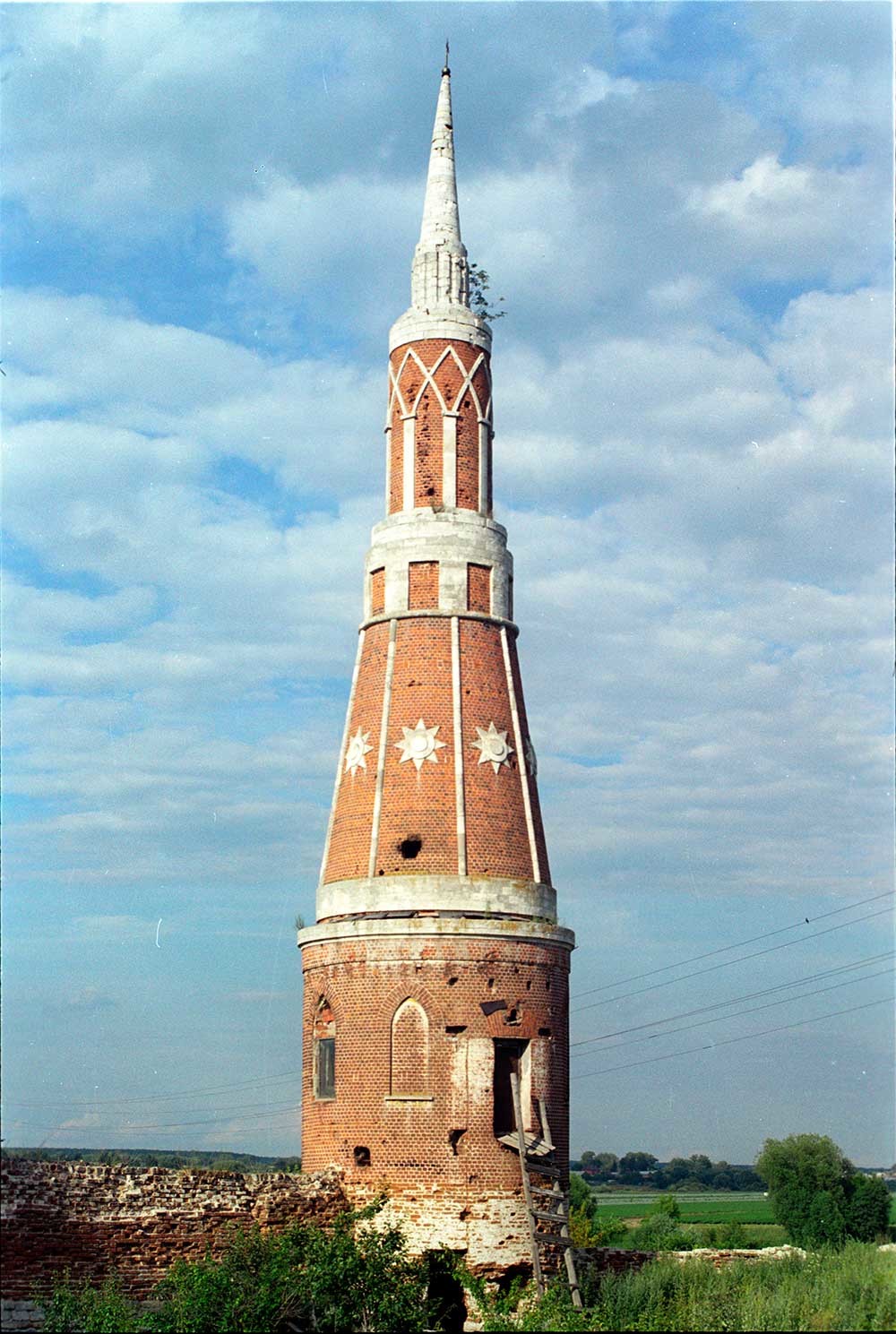 Nonetheless, the original Golutvin Monastery continued to function and even expand. For example, in 1828-33 its refectory Church of St. Sergius of Radonezh was grandly rebuilt. Refectory churches, which had a dining hall attached (hence the name), were a distinctive and essential part of Russian monastic life. This one was mentioned in written sources in the 16th century and probably existed in wood as early as the turn of the 15th century.

From its facades and pediments to its dome, the proportions of the St. Sergius Church qualify it as one of the better examples of late neoclassicism in Kolomna. Although the interior was stripped during the Soviet period, the church has now been restored for services. 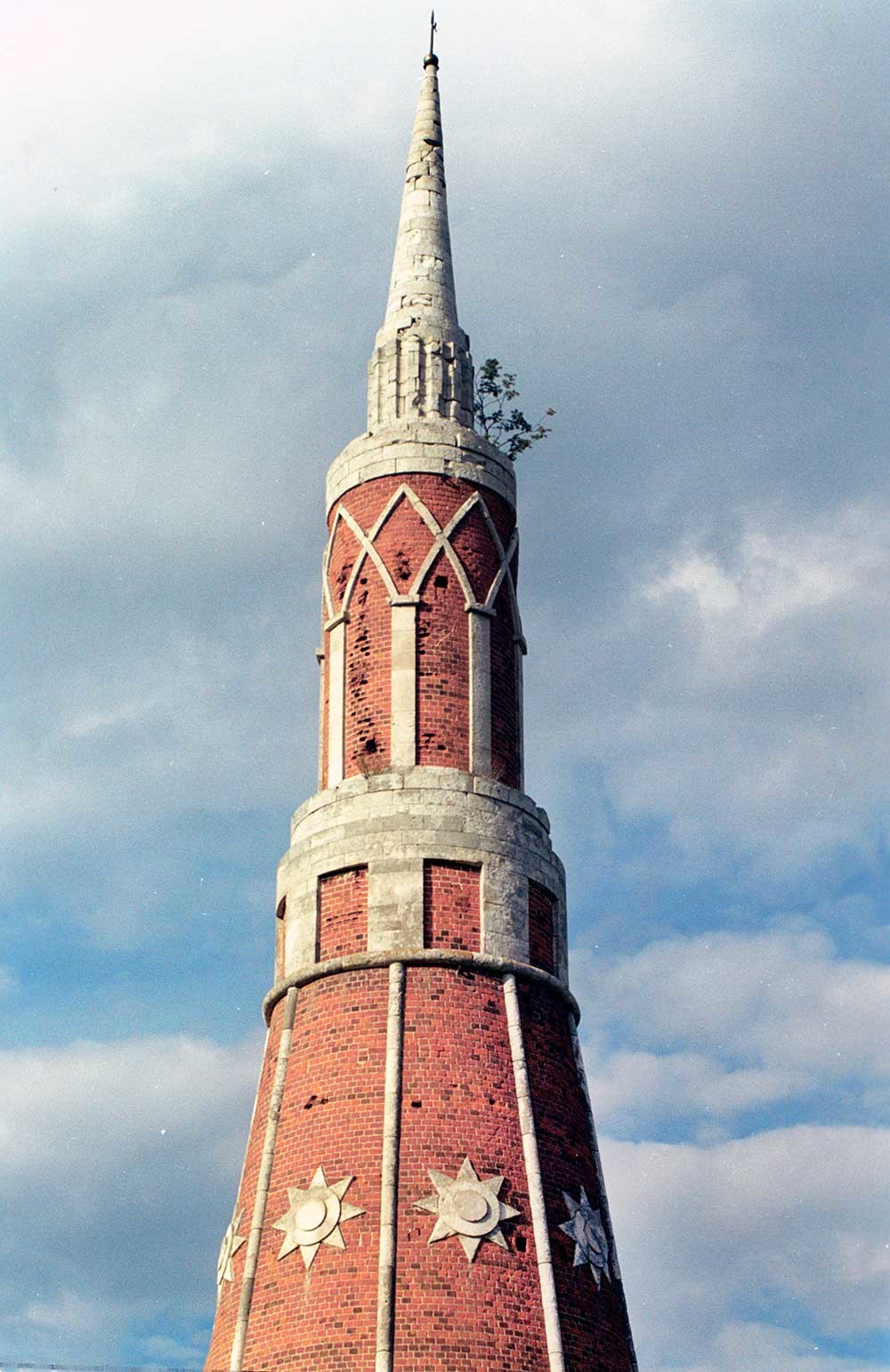 Also restored are two cloister wings, rebuilt in the early 19th century as part of the north monastery wall. A separate building for the abbot's residence, situated at the northwest corner of the refectory church, was completed in two stages between 1811-18.

By far the most colorful feature of the Old Golutvin Monastery is its wall towers. As if to compensate for the monastery's overall ascetic design, the towers display a panoply of playful architectural motifs. 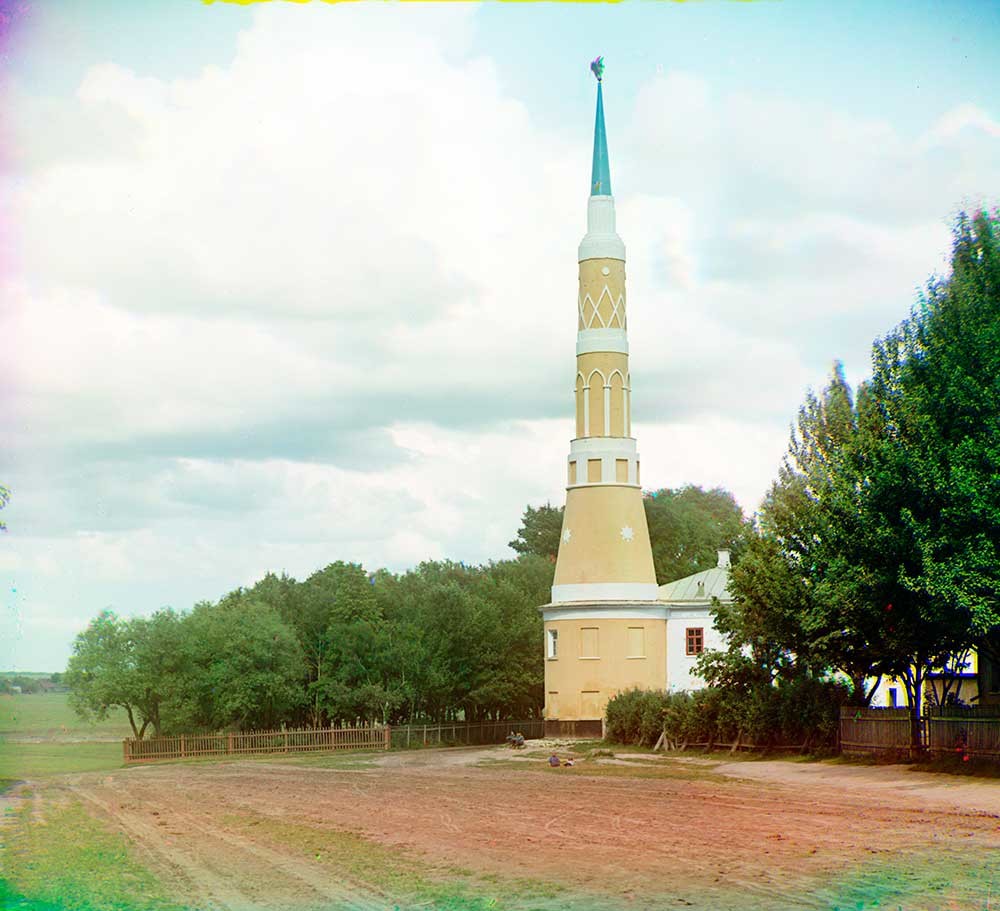 Built of red brick with limestone details, the towers reflect the architectural capriccios of the distinguished Moscow builder Matvei Kazakov, who knew Kolomna well, made a series of drawings of the city and was involved in its rebuilding after the 1777 fire.

Kazakov was an adherent of neoclassicism, but like his contemporary Vasily Bazhenov, he was attracted to the possibilities of the pseudo-gothic style, which combined the European pseudo-Gothic fashion with elements from medieval Muscovite architecture such as the Kremlin walls. Catherine the Great was enamored of the pseudo-gothic style, and both Kazakov and Bazhenov were involved in work for her imperial estate of Tsaritsyno (now in the southern part of Moscow), which has forms that resemble the Golutvin towers. 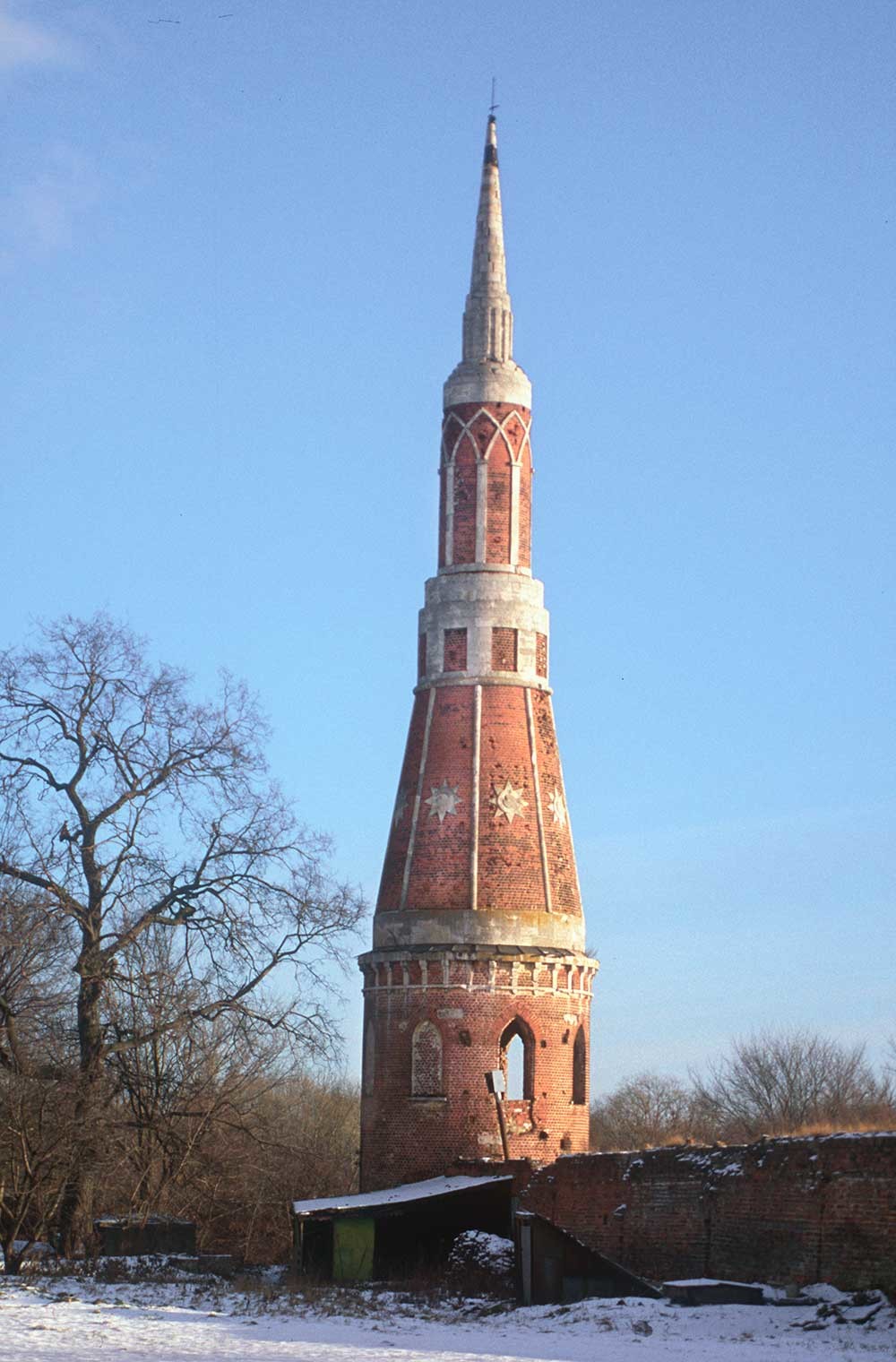 Although the tower designs have been attributed to Kazakov, another view states that the walls and original four low towers were completed by 1763, while the soaring sharp forms of other towers were part of an expansion of the walls in the early 19th century. The brick Gothic Revival style was still evident in Russian architecture in the first third of the 19th century, and similar wall towers have been dated to that period at other Kolomna monasteries. 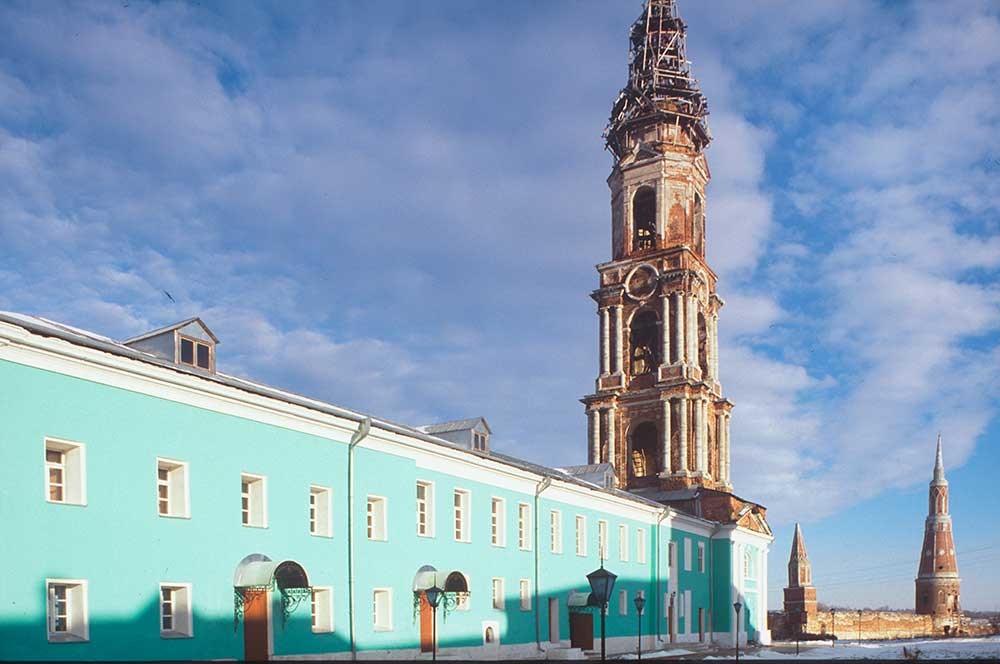 Among the most important towers is the high belfry tower, constructed at the turn of the 19th century of brick with neoclassical limestone detailing. One of the interesting features of this four-tiered structure is its placement over the main gate to the monastery. The usual Russian practice is to place a church in this position, and in fact, the bottom tier of the bell tower contains the gate Church of the Presentation, designed in a neoclassical style.

Whatever their chronology, the Golutvin towers are not only structurally daring, but also delightful examples of fantasy in Russian architecture. Prokudin-Gorsky’s photographs convey their appeal as a reflection of a culture long past.

Fortunately, their sturdy construction enabled them to survive through decades of neglect--as my mid-1990s photographs demonstrate. Clearly visible from the main rail line, they continue to delight and amuse. 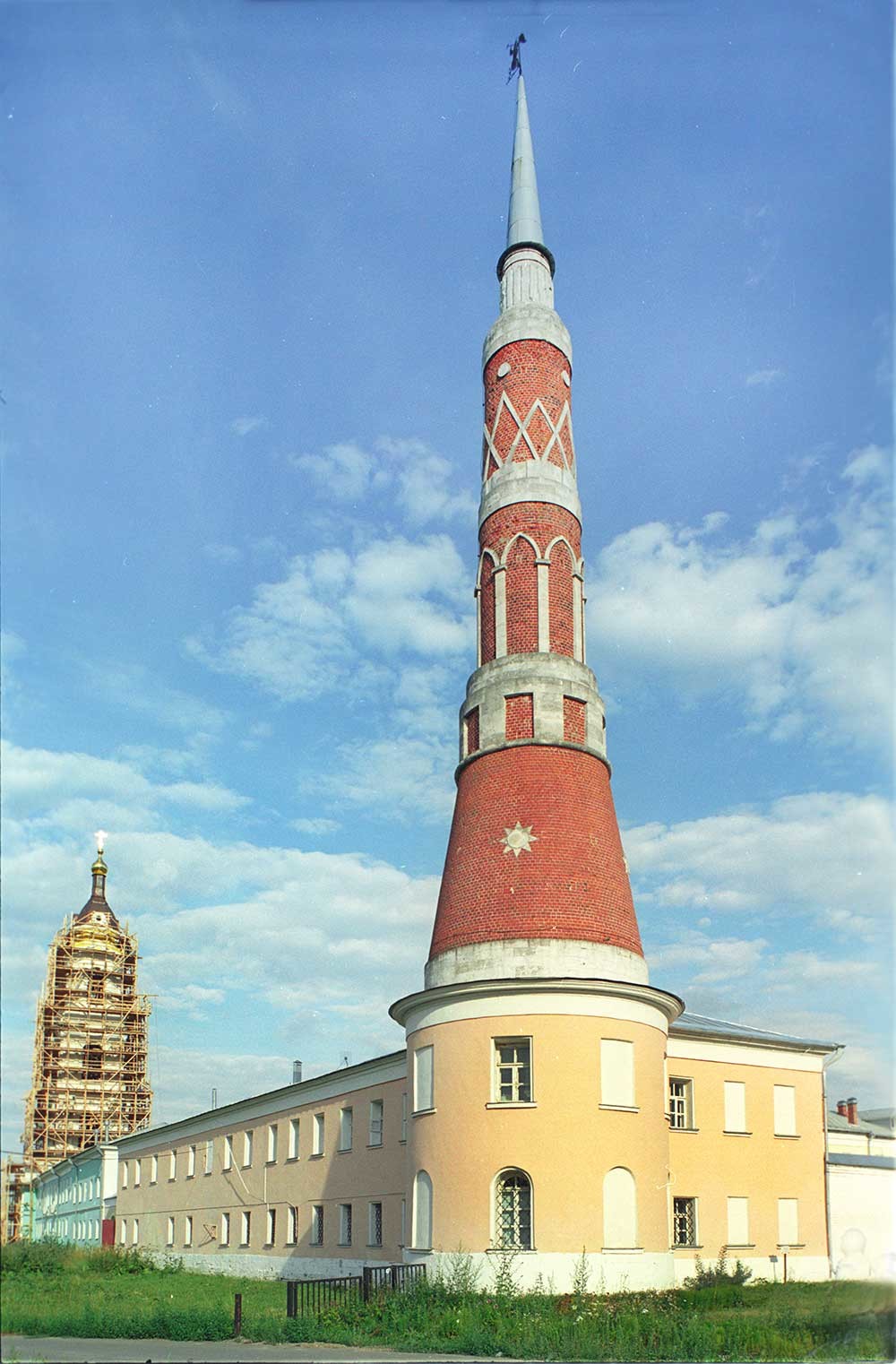