The Mozhaisk Luzhetsky Monastery: picturesque refuge in the shadow of Moscow 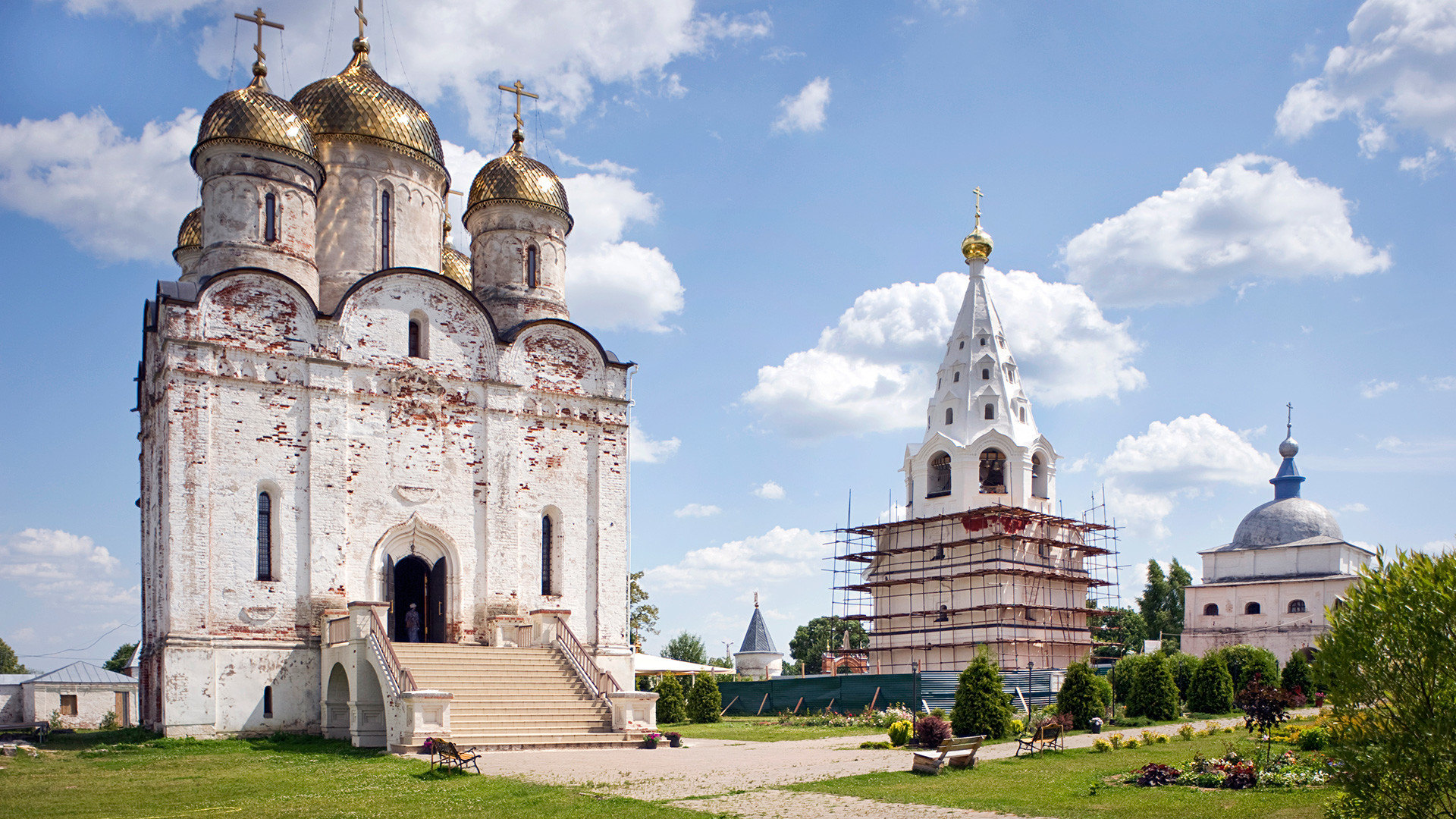 William Brumfield
From the Mongols to Napoleon, Mozhaisk has survived centuries of turmoil.

At the beginning of the 20th century, Russian chemist and photographer Sergei Prokudin-Gorsky developed a complex process for vivid, detailed color photography. His vision of photography as a form of education and enlightenment was demonstrated with special clarity in his photographs of architectural monuments taken at historic sites throughout the Russian heartland. 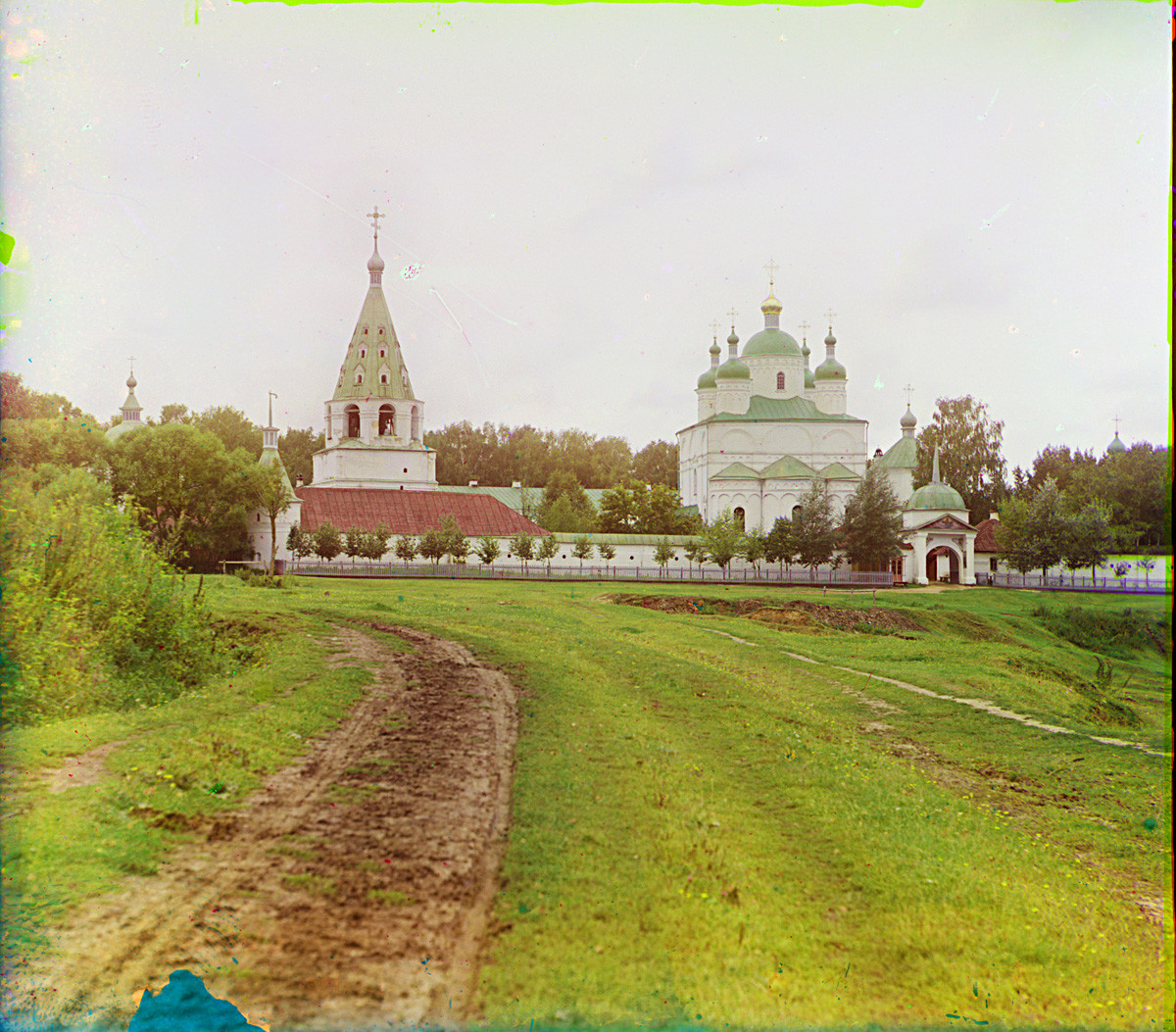 One such settlement is the small town of Mozhaisk, which Porkudin-Gorsky visited in the summer of 1911 as part of a project to photograph sites connected with the centennial of the Napoleonic invasion of Russia. My several visits to Mozhaisk occurred between 1992 and 2015.

Located some 60 miles to the west of Moscow, Mozhaisk was first mentioned in medieval chronicles under the year 1231, when it faced attacks ​by the northwestern commercial power of ​Novgorod the Great, as well as ​by ​Prince Yaroslav from the eastern power center of Vladimir. The Mongol invasion later that same decade (1237-38), however, wreaked destruction that dwarfed anything yet seen in medieval Rus​. 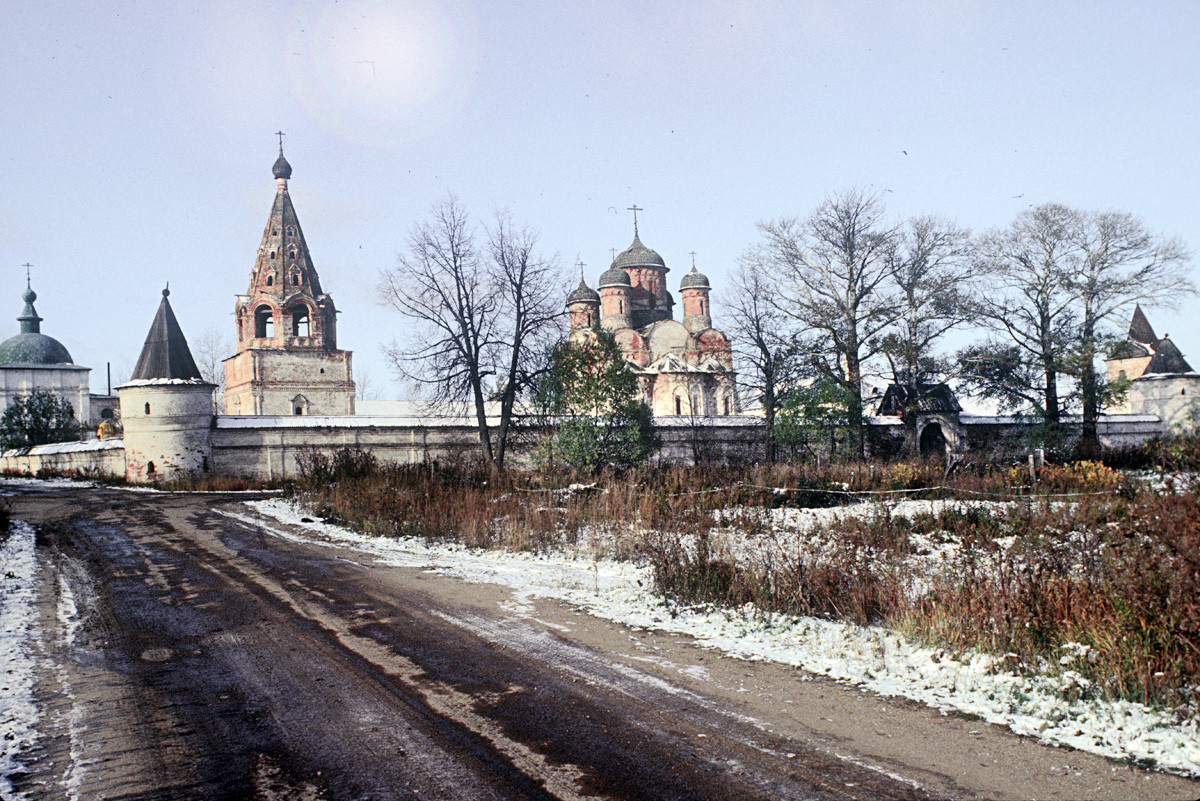 Throughout the 13th century, Mozhaisk was linked to the powerful Smolensk principality to the west, but in 1303, Mozhaisk was seized by Muscovite Prince Yury Danilovich, who used its fortress as a bulwark on Moscow’s western borders. This strategy proved sound in 1341 and 1368 when Mozhaisk withstood attacks by Lithuania’s Prince Olgerd as part of larger campaigns against Moscow.​ 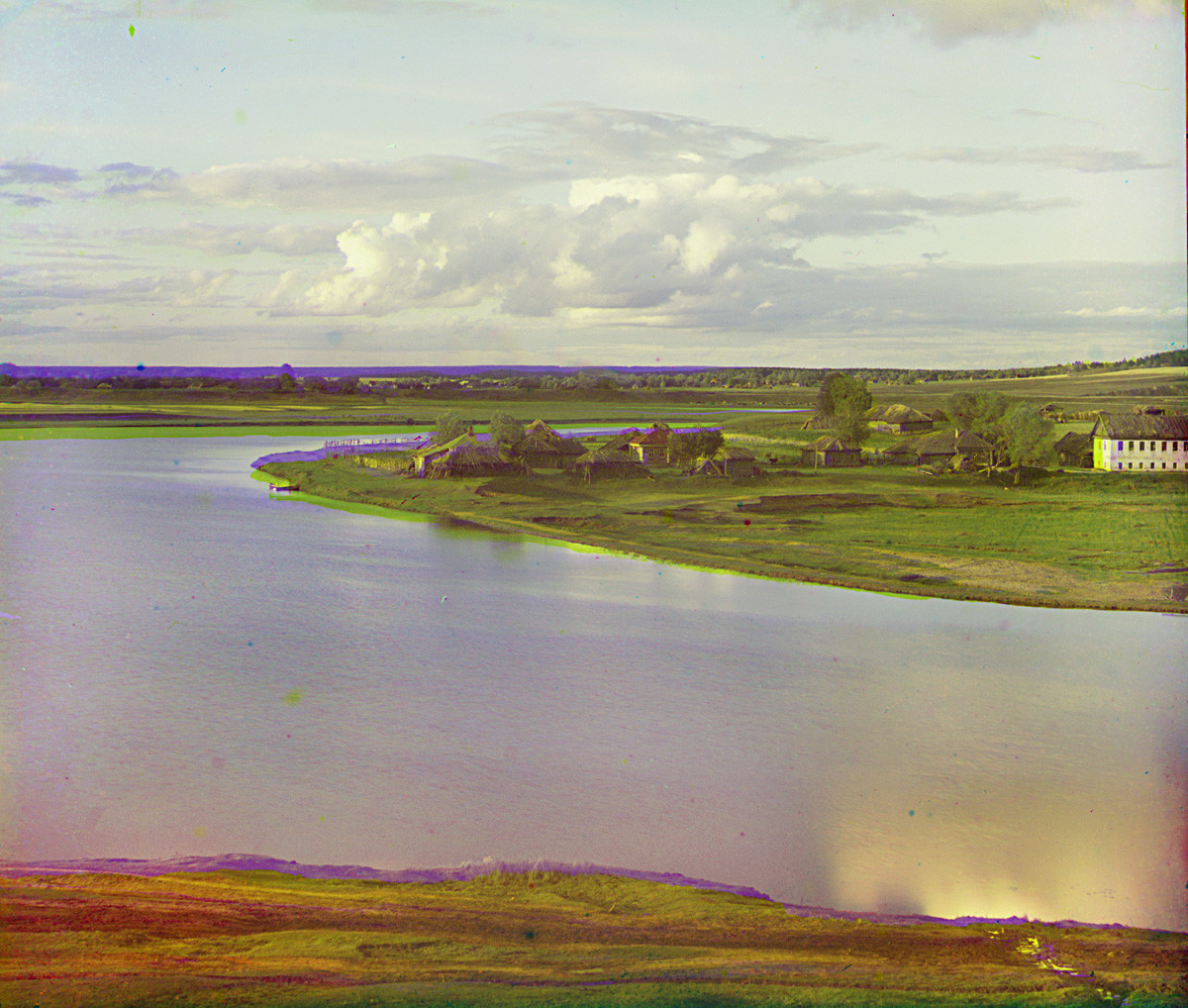 Mozhaisk was again devastated by Khan Tokhtamysh in 1382 during an invasion to reassert the authority of the Horde over Moscow’s Grand Prince Dmitry Donskoy, who defeated the Tatar army of Khan Mamai near the Don River in 1380. This litany of devastation suggests that the fate of Mozhaisk reflected the violent history of all medieval Muscovy.

A monastery of noble origins

Prokudin-Gorsky devoted special attention to the Luzhetsky Nativity of the Virgin Monastery, located on the northwestern fringe of town in an area known as Luzhki (meadows) overlooking the Moscow River. Its founder, St. Ferapont of Belozersk (1330s-1426, canonized in 1549), was a monk of noble origins and a disciple of St. Sergius of Radonezh, the avatar of Muscovite monasticism. 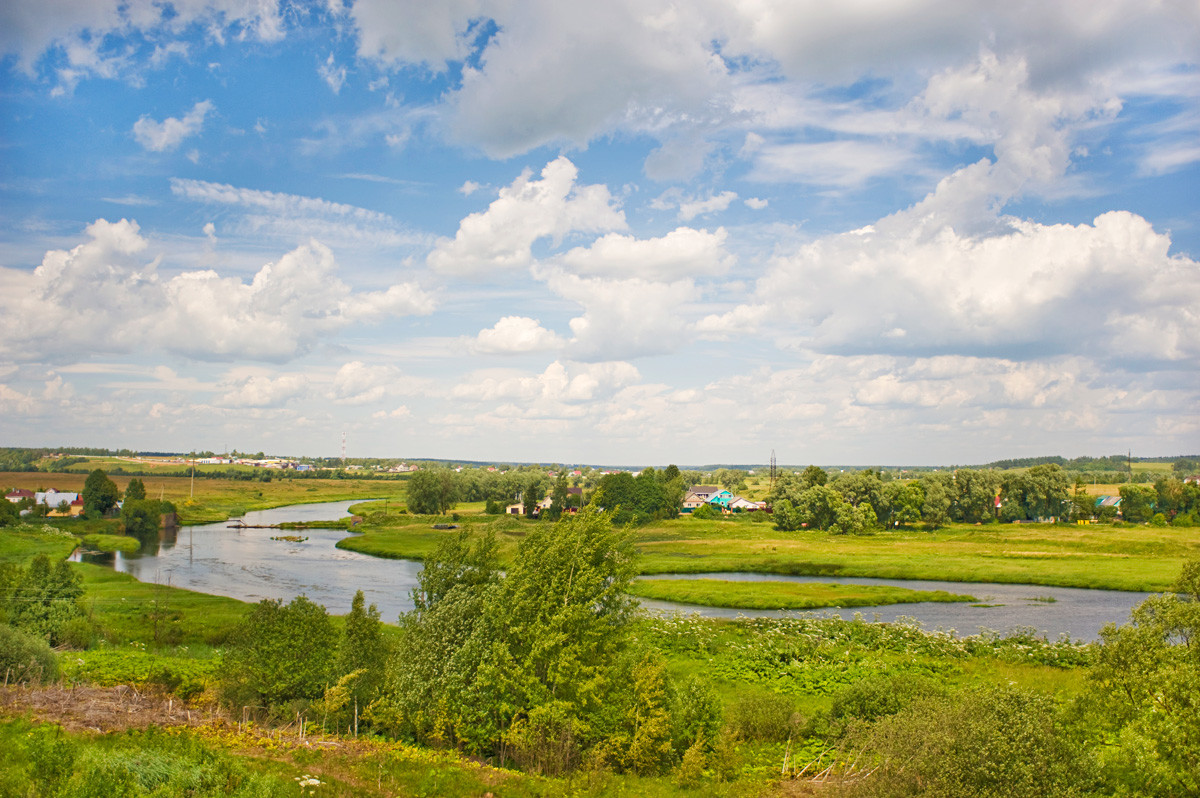 St. Ferapont is ​closely associated with the Nativity of the Virgin-Ferapontov Monastery, which he founded in the northern Vologda territory in 1398. Although small in size, the monastery at Ferapontovo is known for its sublime frescoes, created in 1502 by the Moscow painter Dionisy and his sons.

It was no doubt inevitable that Ferapont would be summoned back from the north to the Moscow area. He had close connections with the Moscow court, and his renown had come to the attention of Prince Andrei of Mozhaisk, son of Moscow’s Grand Prince Dmitry Donskoy and holder of title to the northern lands around White Lake (Beloozero). 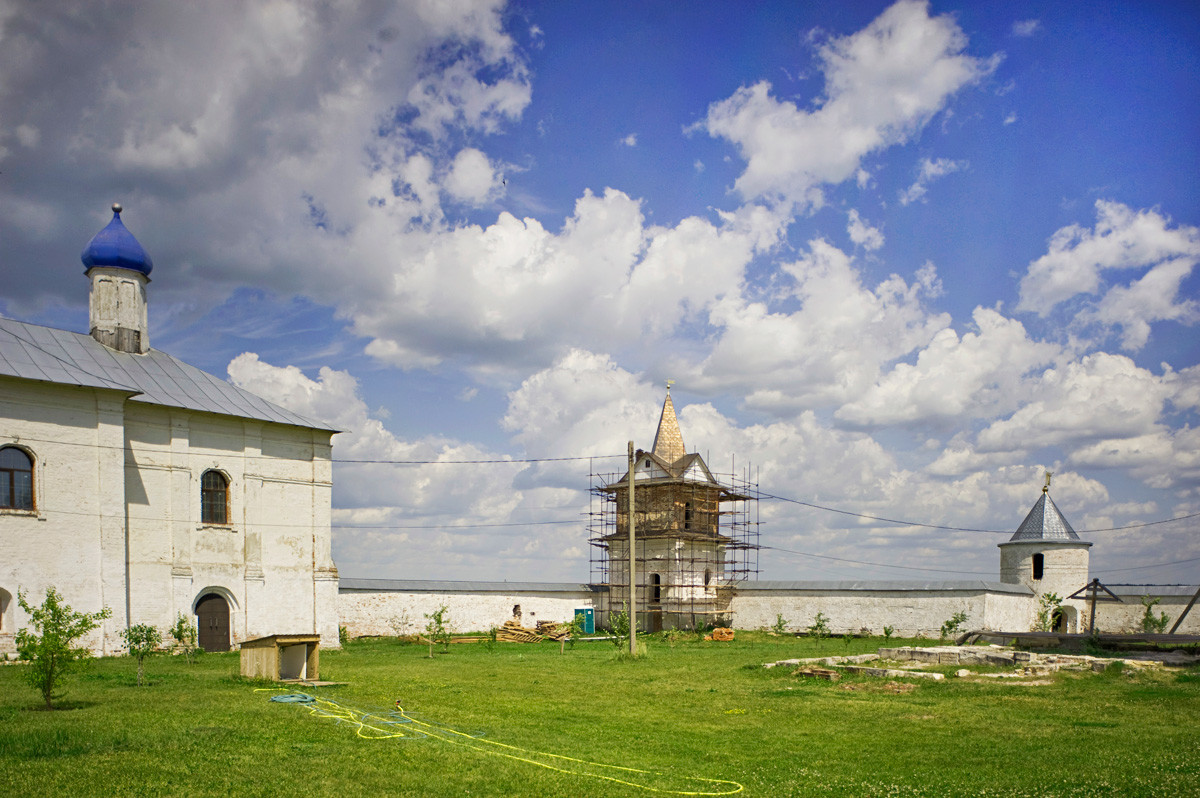 At Andrei’s insistent request, Ferapont arrived at Mozhaisk in 1408 to establish another monastery dedicated to the Nativity of the Virgin, a holiday with special significance for Andrei and his father. Prince Andrei supported the monastery with the construction of a small limestone church, whose foundation is still visible. Excavations at the site in 1997 uncovered what are thought to be the remains of St. Ferapont. 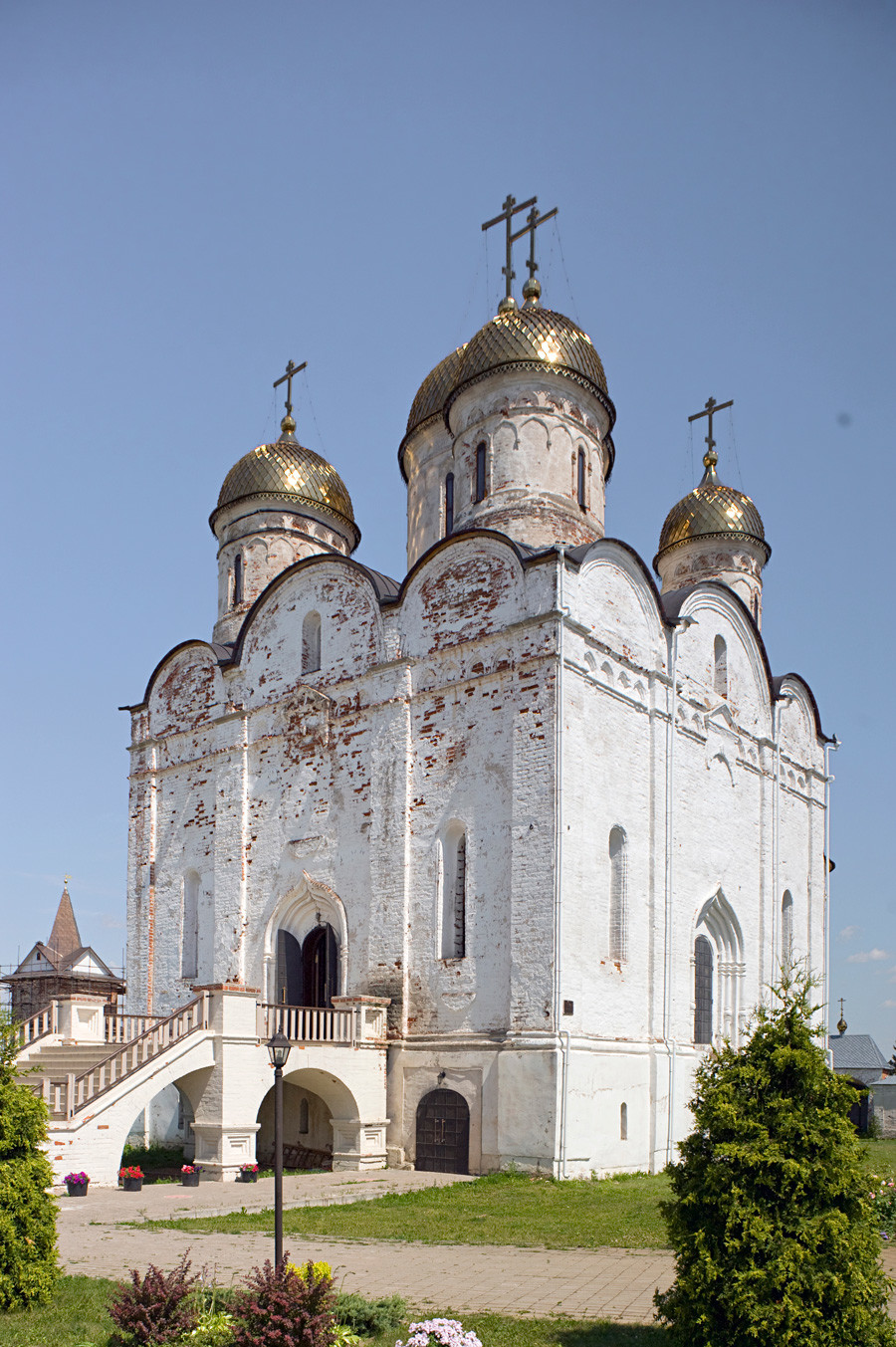 A major building campaign at the monastery began under the direction of Makary, who served as abbot of the monastery in 1523-26 and continued to support it after becoming the Metropolitan, or spiritual leader, of the Russian church in 1542. Makary played an important role in both church and state affairs during the early reign of Ivan the Terrible (1530-84). With his guidance, a new masonry Cathedral of the Nativity of the Virgin was begun in the 1520s and consecrated in 1547.

Also dating from the early 16th century is the Church of the Presentation of the Virgin, with an attached refectory, or dining hall. It was substantially rebuilt in the mid-18th century but preserves much of its archaic form. At the turn of the 17th century a domed brick church was erected over the main gate and dedicated to the Transfiguration of the Savior. 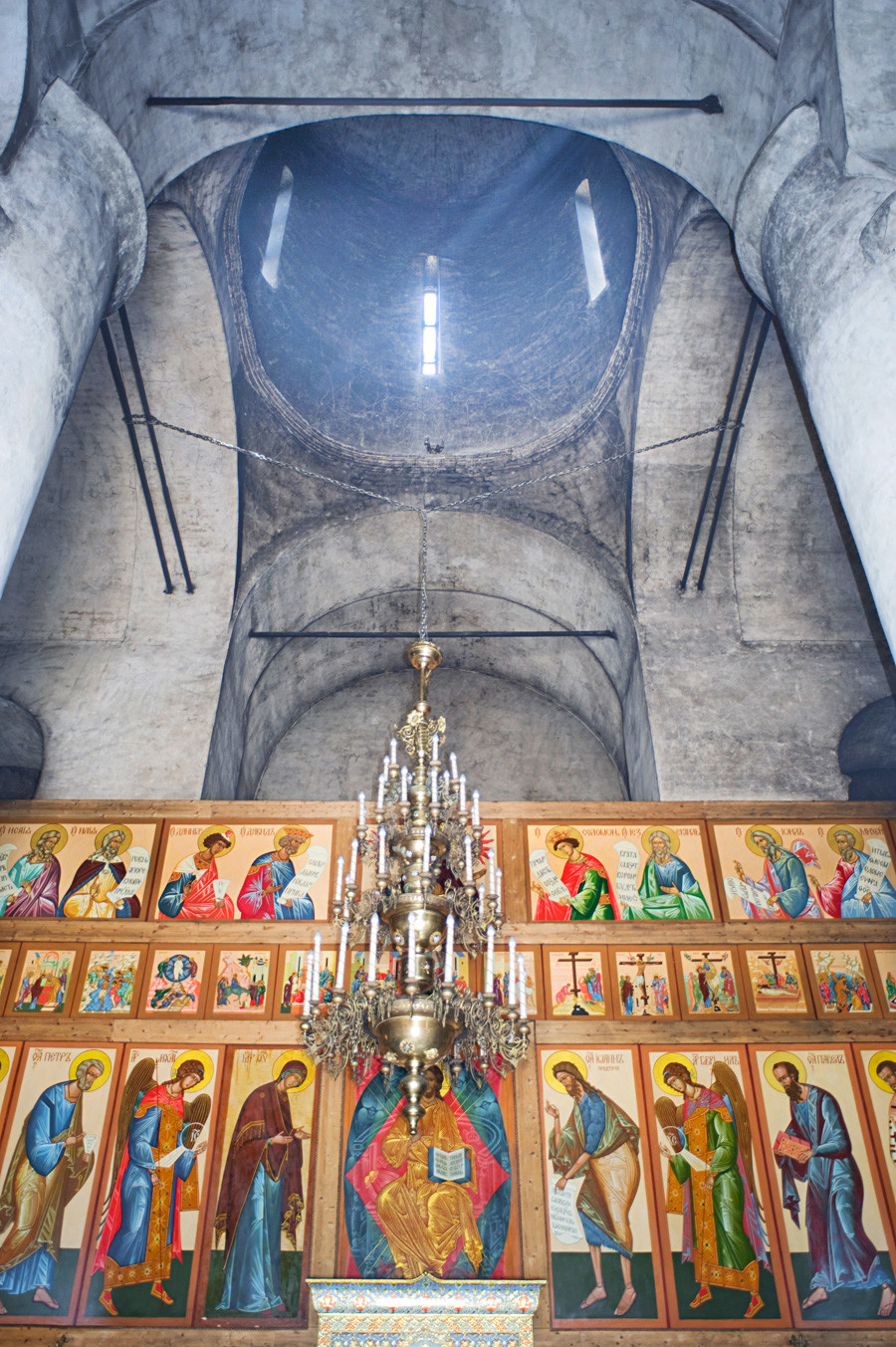 Although Mozhaisk lost​ its former significance during the dynastic turbulence of the early 17th century, the town gradually revived in the shadow of Moscow. In the 1680s, the cloisters were rebuilt in brick, as were the monastery walls with large corner towers. During the same period a massive bell tower was erected and served as the mausoleum of the noble Savyolev family.

The town’s strategic position on a main route to the west brought renewed danger during the Napoleonic invasion of 1812. Mozhaisk was gripped with military ardor as great armies converged on the nearby village of Borodino. Following the titanic clash of armies there on Aug. 26 (Sept. 7 by the Western calendar), Mozhaisk was filled with Russian wounded. 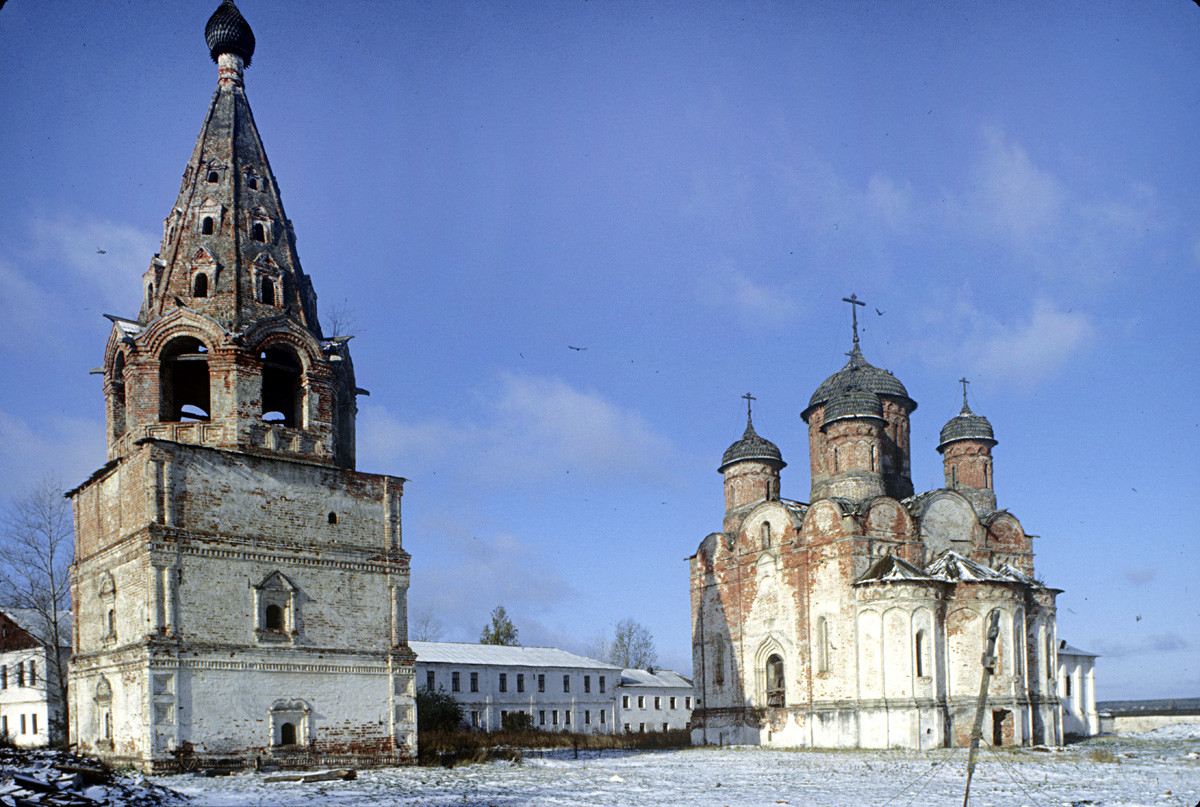 The monastery was closed in 1922 after the Soviets came to power, although its cathedral served as a parish church until its closure in 1929. Thereafter, the monastery buildings were ransacked and converted to various workshops. 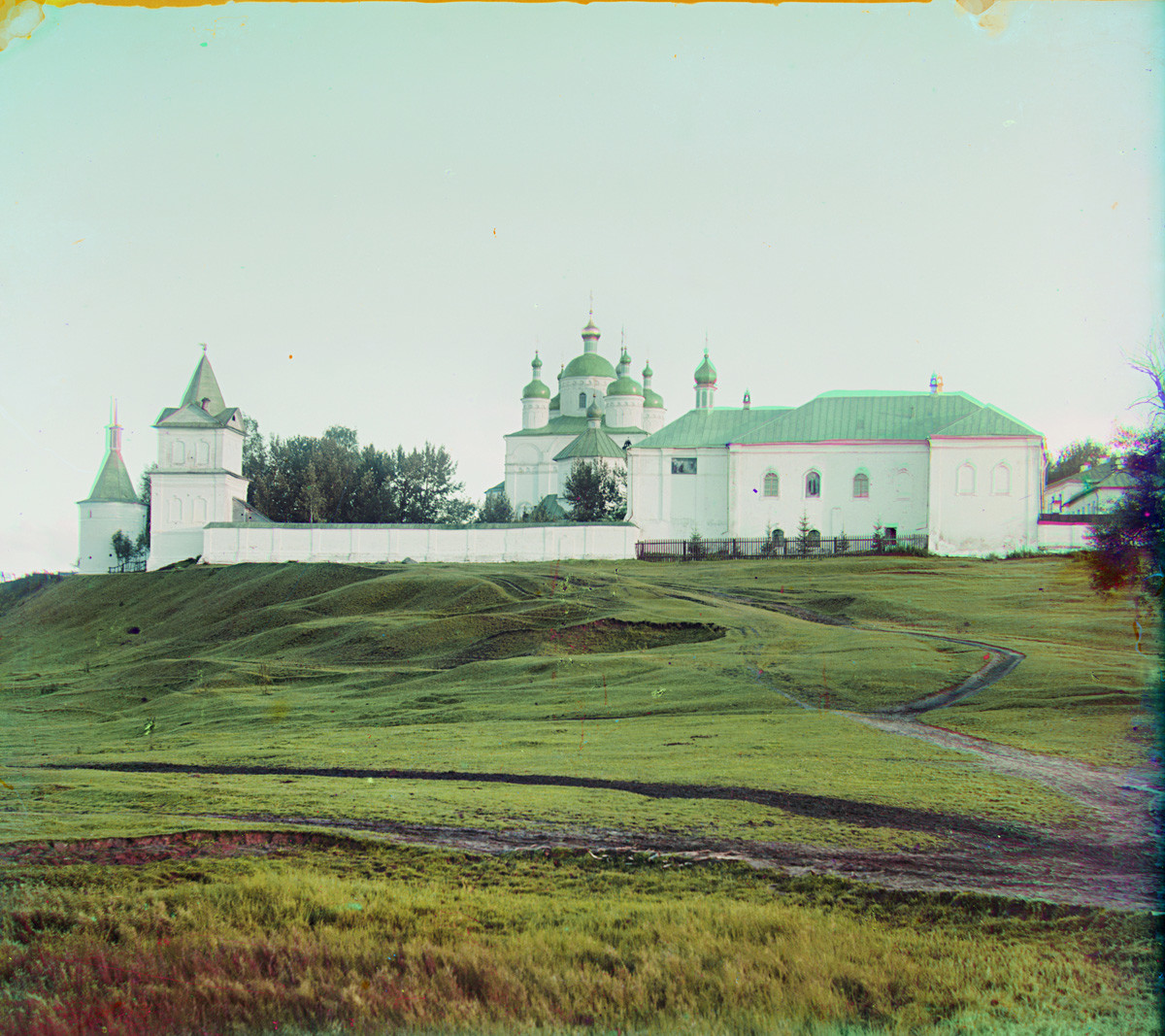 Nonetheless, the monastery’s historical significance was recognized, and limited restoration work began on the Nativity Cathedral in the early 1960s. My photographs from 1992 show the beauty of the monastery, although still in a desolate state.

In 1994 the Luzhetsky Monastery was finally returned to the Orthodox Church, and services resumed. Five years later the relics of St. Ferapont were returned to the monastery and laid to rest in the Nativity Cathedral. 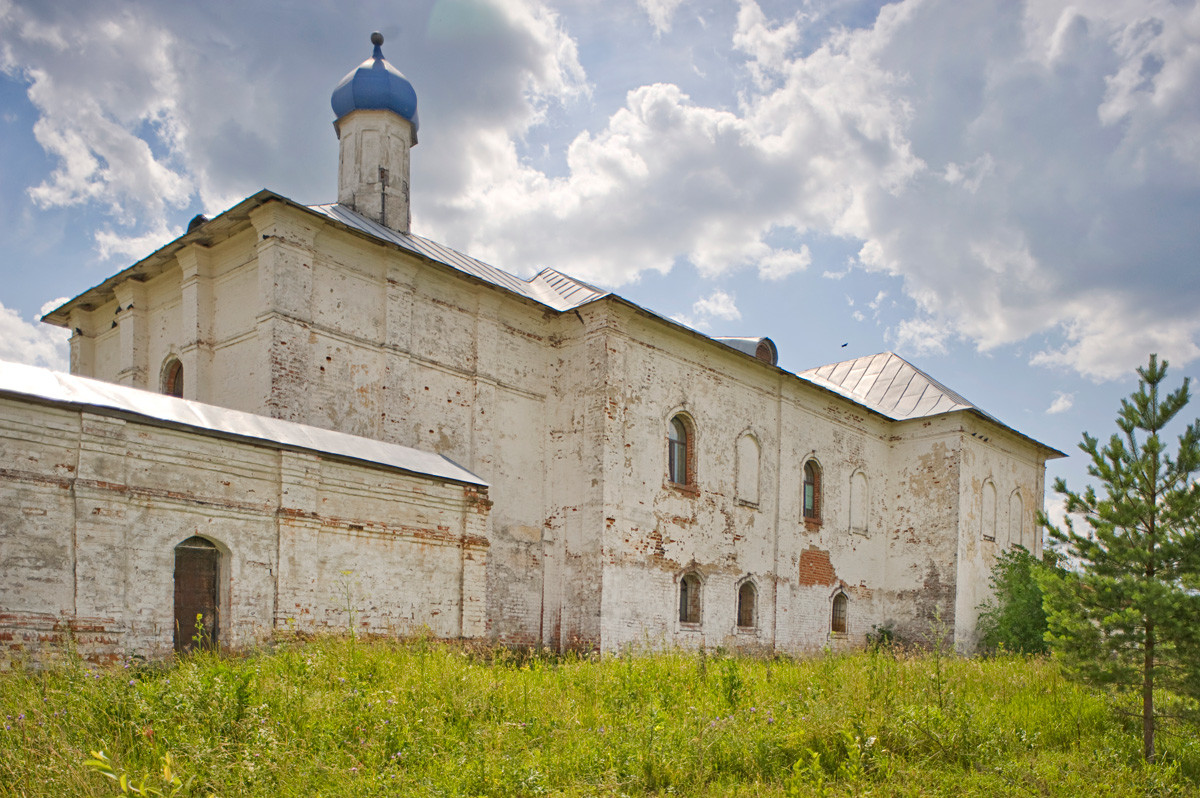 The memory of St. Ferapont is still venerated in Mozhaisk. In the nearby village of Isavitsy, a log chapel was erected in his memory in 2008 on the 600th anniversary of the founding of Luzhetsky Monastery. At the center of the memorial site is a sacred spring reputed to have been discovered by Ferapont himself. Visitors ​freely take water from th​e spring. 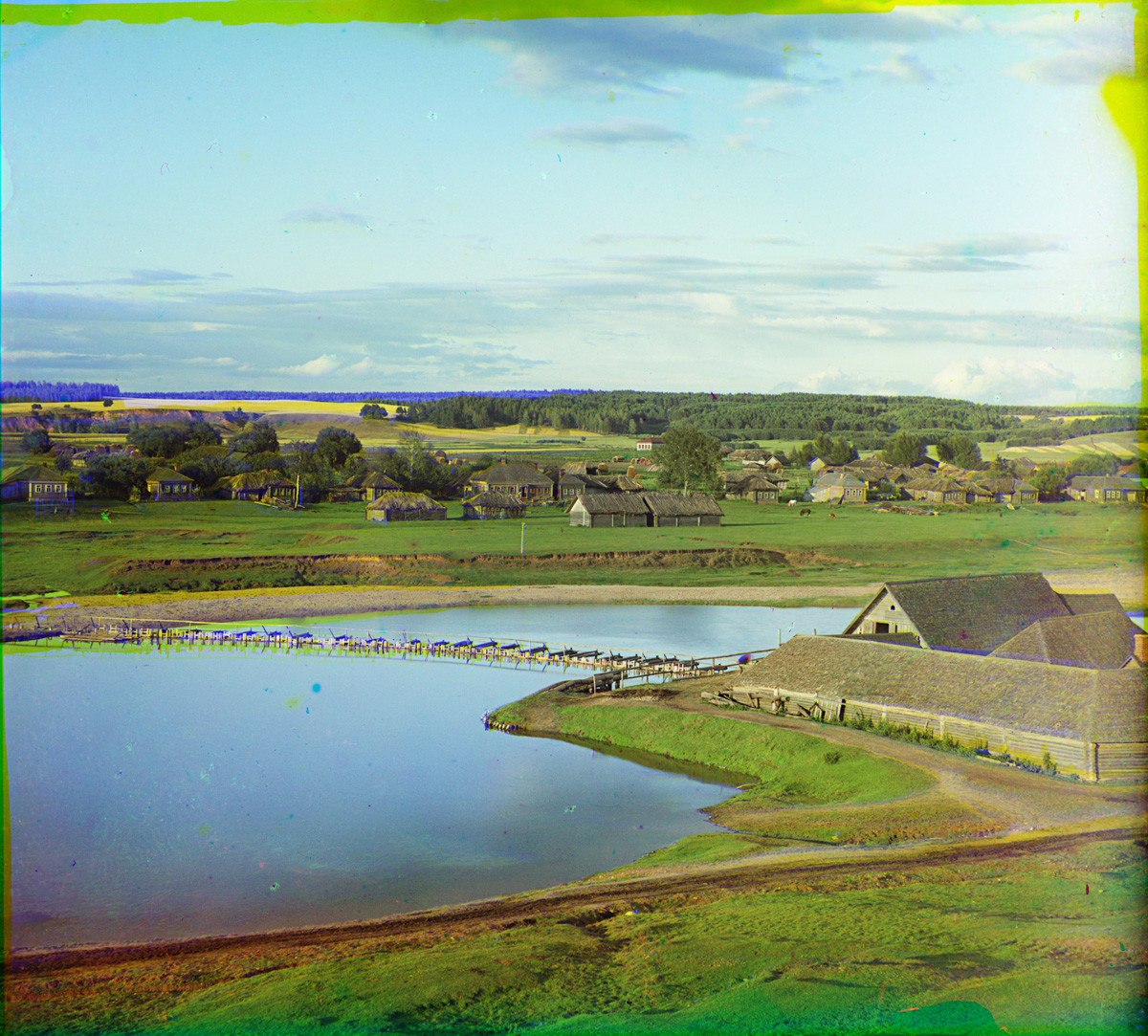 Prokudin-Gorsky also photographed the monastery’s bucolic surroundings, with views of the meadows across the small Moscow River. My photographs over a century later show much the same landscape. 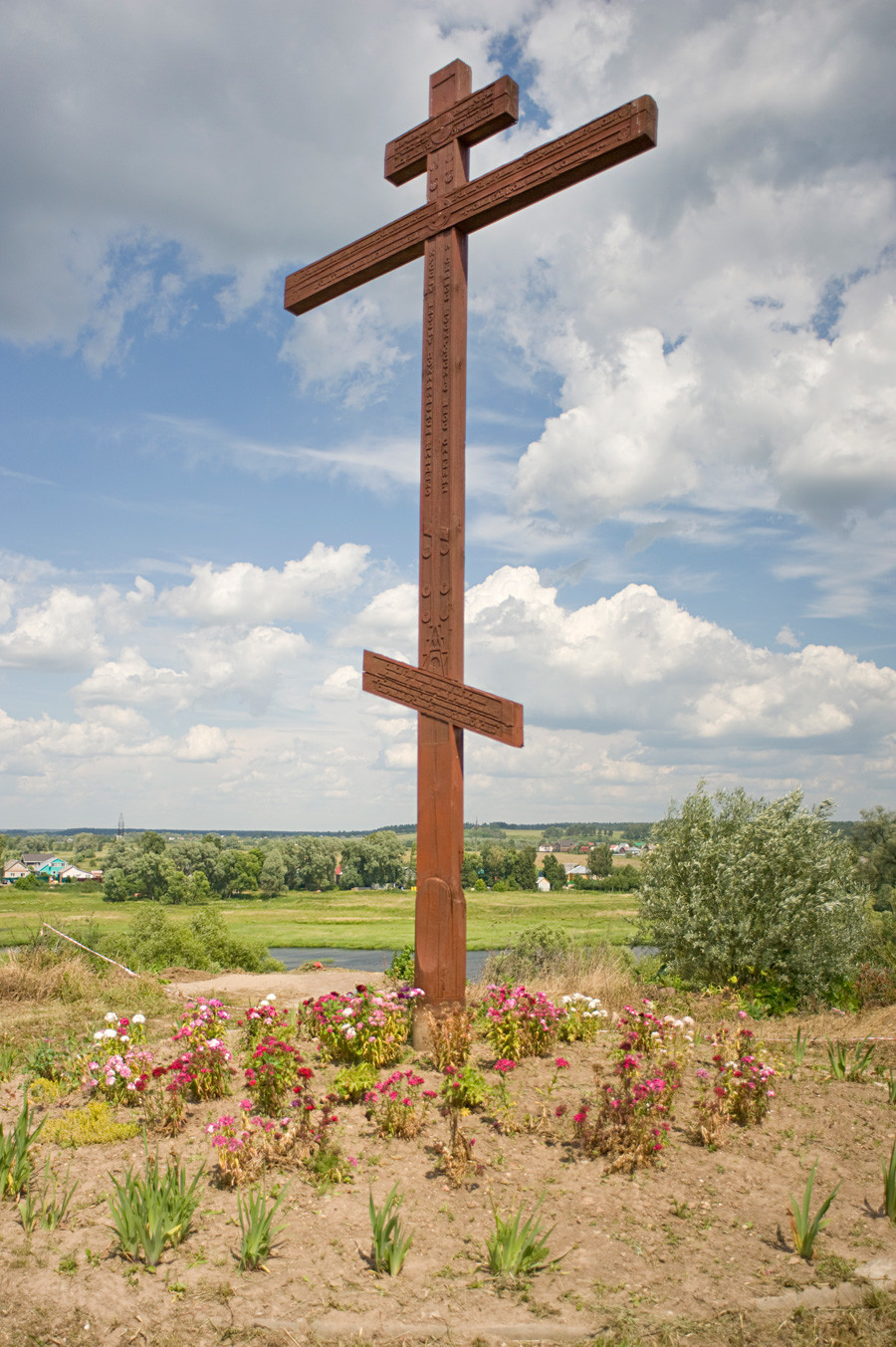