Rostov’s Savior Frescoes: Fire and brimstone in a brilliant setting

Travel
William Brumfield
A complex expression of the early church’s wealth and power. 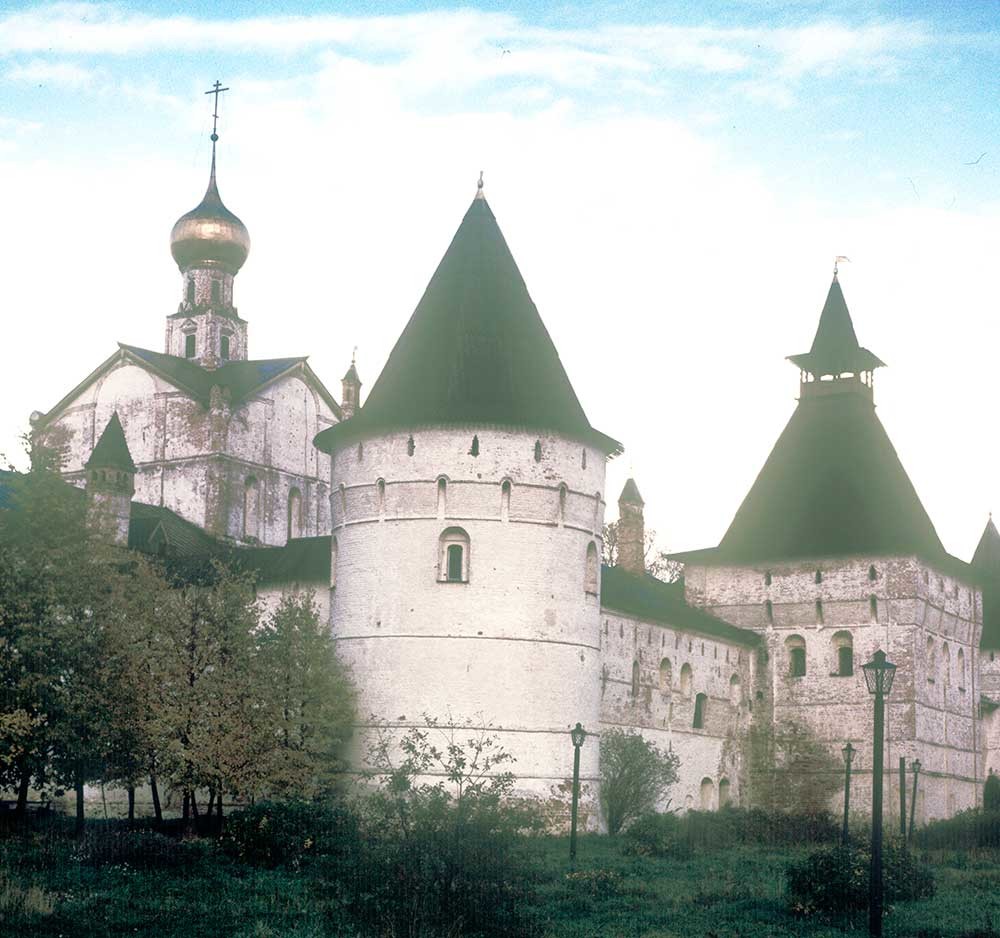 Prokudin-Gorsky was particularly interest in the ancient town of Rostov the Great (Veliky), which he visited in 1911. Located some 130 miles northeast of Moscow, Rostov the Great is one of the earliest historically attested towns in Russia, first mentioned under 862 in the chronicle "Tale of Bygone Years."

An expression of church power 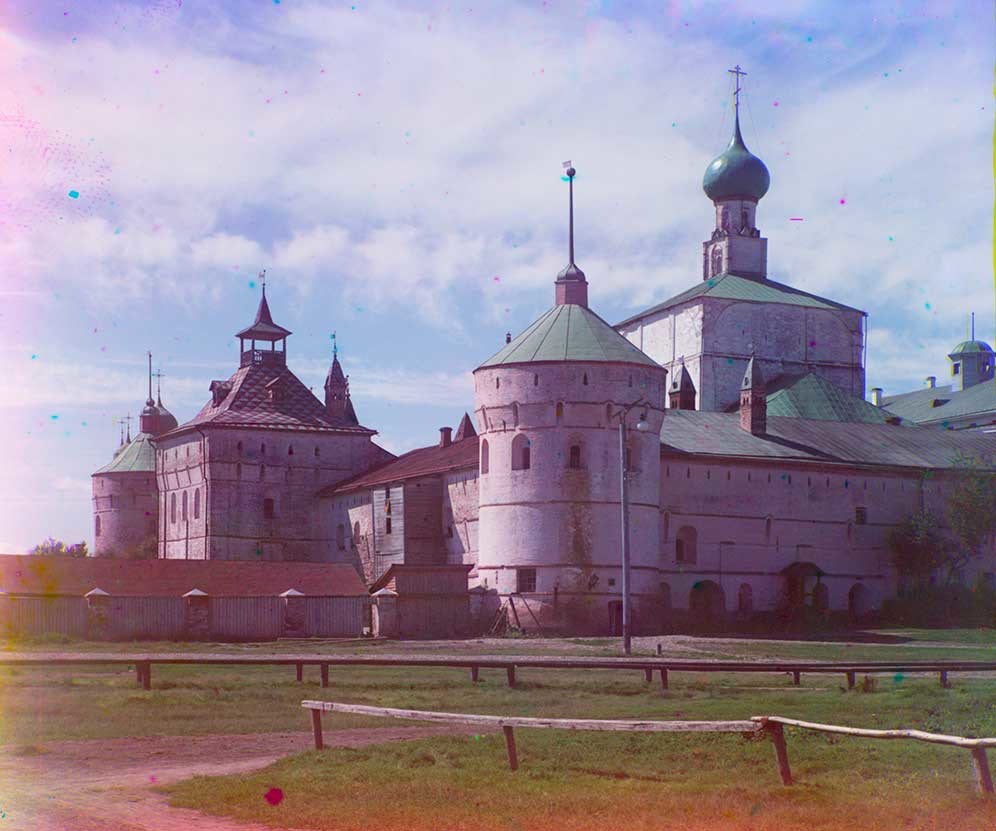 Its main architectural ensemble is the majestic Court of the Metropolitan —popularly called a kremlin (citadel) — that rises above the north shore of Lake Nero.

The name pays homage to its primary builder, Metropolitan Jonah of Rostov. After the Patriarch, Metropolitan is the highest ecclesiastical rank in the Russian Orthodox Church. 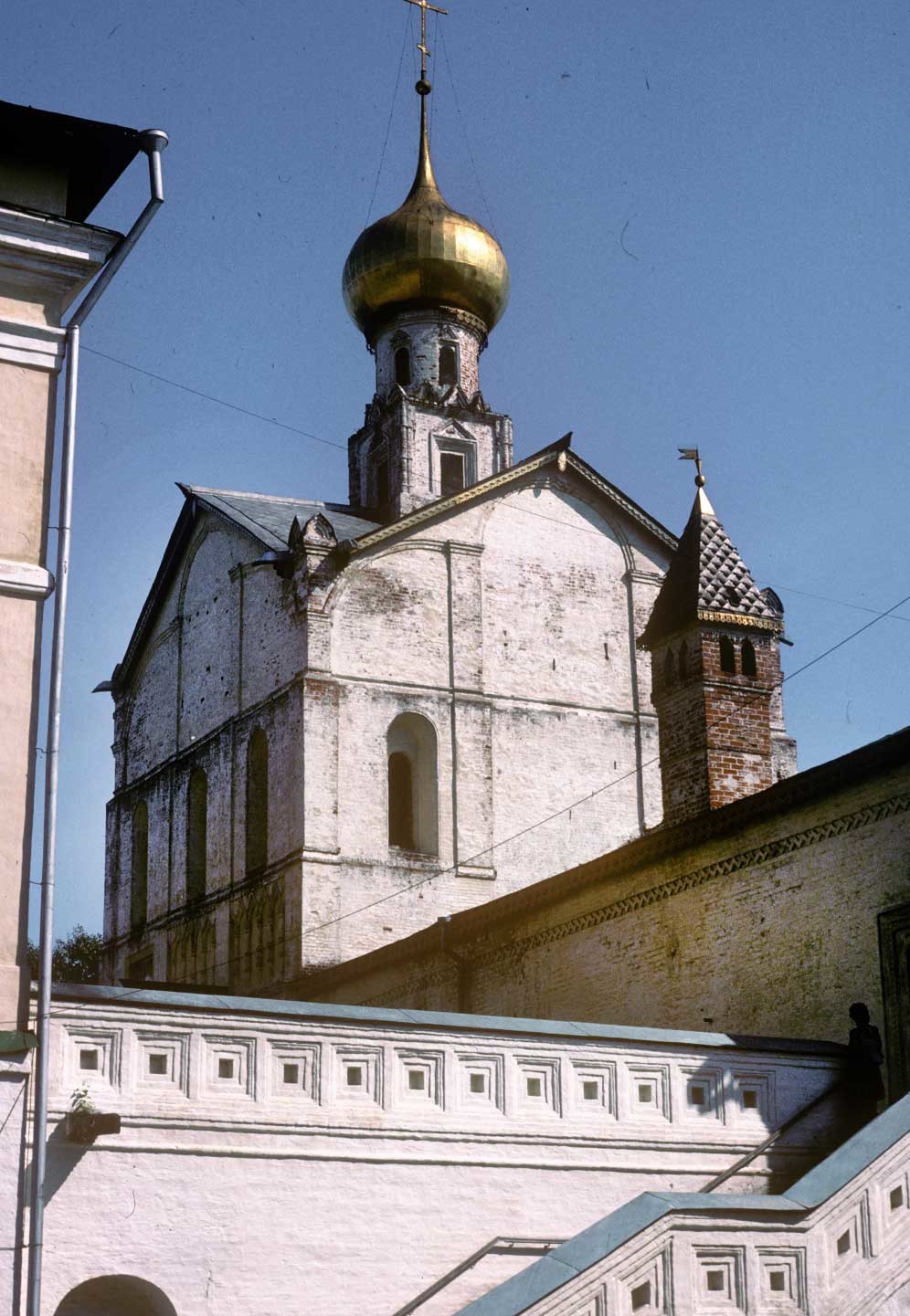 Court of the Metropolitan. Church of the Savior "on the vestibule," northwest view from courtyard. August 21, 1988.

Jonah Sysoevich (ca. 1607-90) was the son of a country priest named Sysoi. Tonsured at the Resurrection Monastery in Uglich, he rose through the monastic hierarchy and in 1652 was appointed Metropolitan of Rostov by the newly elected Patriarch Nikon in Moscow.

During this period, the Russian church embarked on extensive building projects that would be the final expression of church power before the curtailing of its wealth by the state in the 18th century. Jonah had at his command 16,000 serfs as well as the best craftsmen of his large and prosperous diocese. Within 20 years —between 1670 and 1690 — Jonah's builders erected several large churches and other buildings for the Metropolitan's Court and residence as well as monumental walls with towers and gate churches. 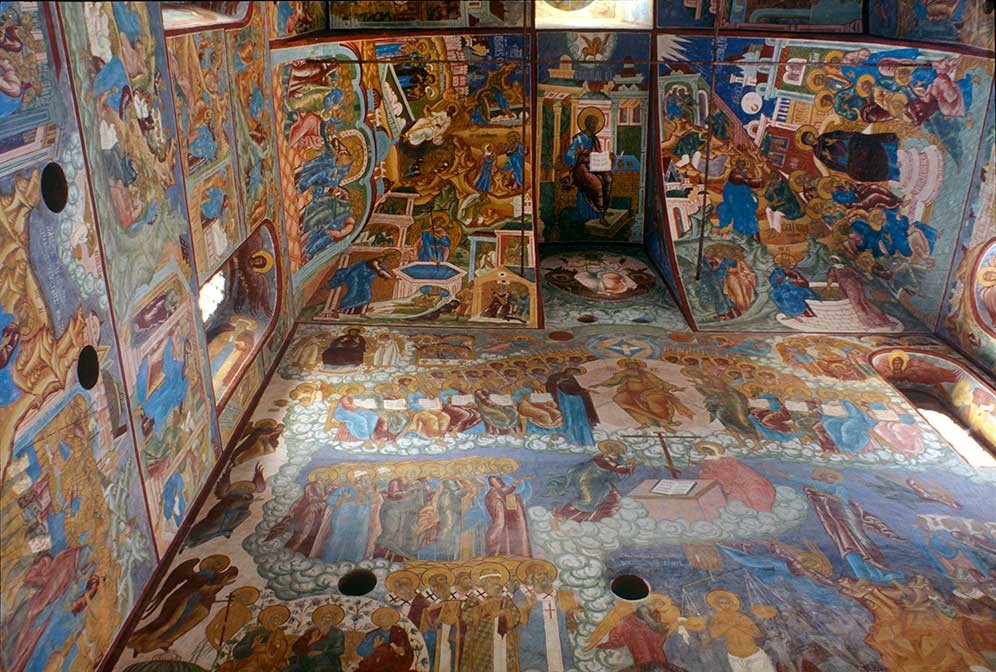 Church of the Savior. Interior. From left: south wall, west wall with fresco of Last Judgement. Christ enthroned with the righteous at his right hand & the condemned at his left. July 29, 1997.

One of the exquisite jewels in this setting is the is the small Church of the Miraculous Icon of the Savior on the Vestibule, built in 1675 above a provisions cellar. It served as the metropolitan's chapel for devotional purposes and for the performance of sacred music.

By placing his camera in a meadow to the southeast of the kremlin walls, Prokudin-Gorsky was able to include not only the church but also the kremlin’s south wall with its decorative towers overlooking Lake Nero. My photographs include a different perspective from the meadow, as well as a view from inside the Metropolitan’s Court. 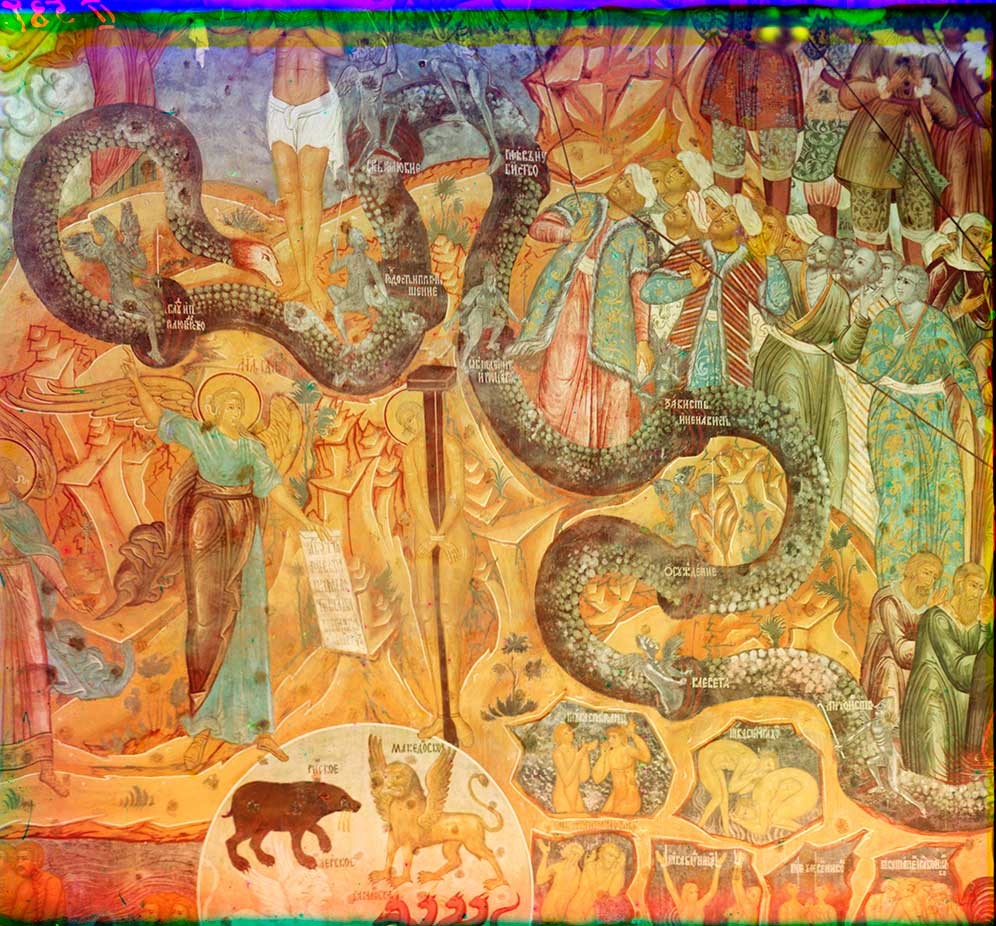 Church of the Savior. West wall with detail of fresco of Last Judgement: the damned descending along the serpent to hell. 1911.

The interior of the Savior Church was covered with arguably the richest of wall paintings in the Metropolitan’s Court. Although Prokudin-Gorsky’s lens did not permit wide views, his interior photographs are among his best, and provide essential, brilliant documentation of this highly original space.

The paintings that cover the interior were originally painted in the late 1670s, soon after the completion of the church. Supervised by a local priest, the master artists were from Yaroslavl, the most productive center of 17th-century church art. The names of three of them are recorded: Dmitry Grigoyev, Fyodor Karpov, Ivan Karpov. 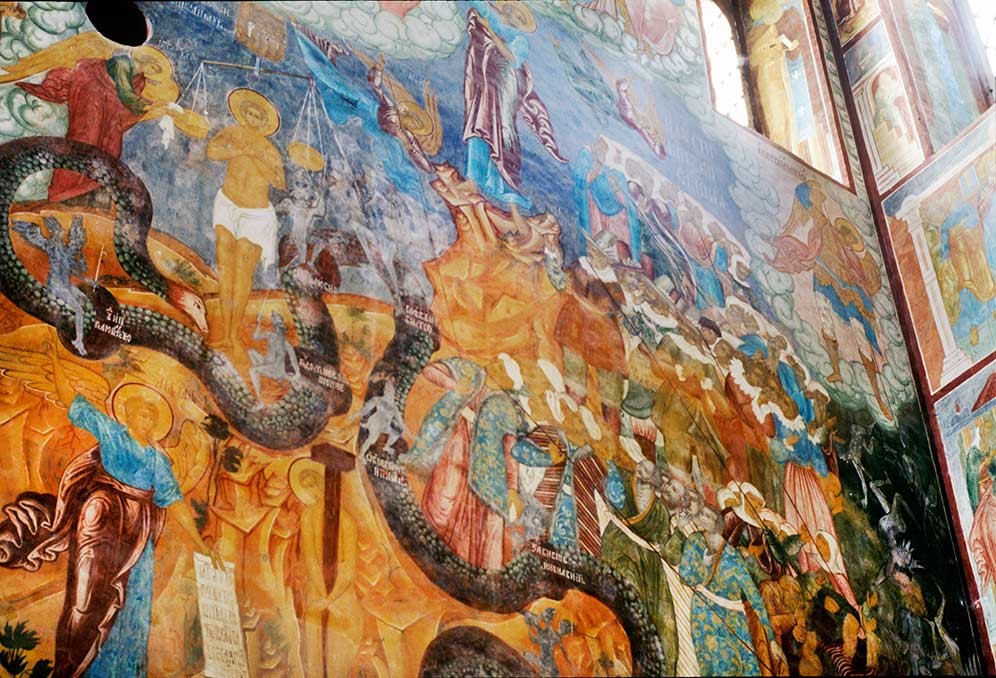 Church of the Savior. West wall, right side with fresco of Last Judgement. Upper left: soul being weighed, with the damned gathered to the right. July 29, 1997.

As part of the late 19th-century restoration of the Metropolitan’s Court, the wall paintings were renovated — or “refreshed” — in 1893 by five masters from the village of Mstyora, known for its icons and miniature lacquer boxes. They were subsequently cleaned and restored over a period of almost two decades, from 1978 to 1995.

The chamber-like dimensions of the interior are configured in one of the most distinctive designs in 17th-century church architecture. The east part, containing the altar, is framed by an unusual arcade with gold painted columns resting on the soleas, a low platform that extends from the altar space. 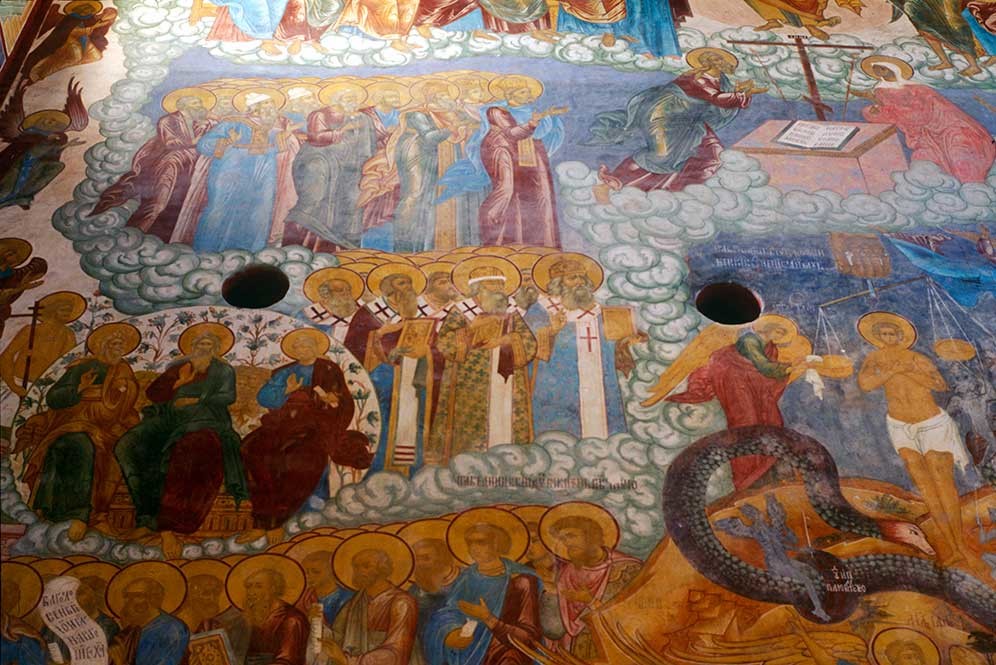 Church of the Savior. West wall, left side with fresco of Last Judgement. From left: the righteous at right hand of Christ; soul being weighed. Lower right: head of serpent leading to hell with seated demons. July 29, 1997.

The upper part of this arcade is painted with sacred images in medallions that suggest the icon screen in a typical Russian church. The arcade itself displays large red seraphim, and the lower part contains representations of Old Testament patriarchs.

The east wall itself is covered with several registers, or rows, of frescoes that suggest the design of an icon screen. The images include Bible scenes as well as theological subjects such the Holy Trinity. 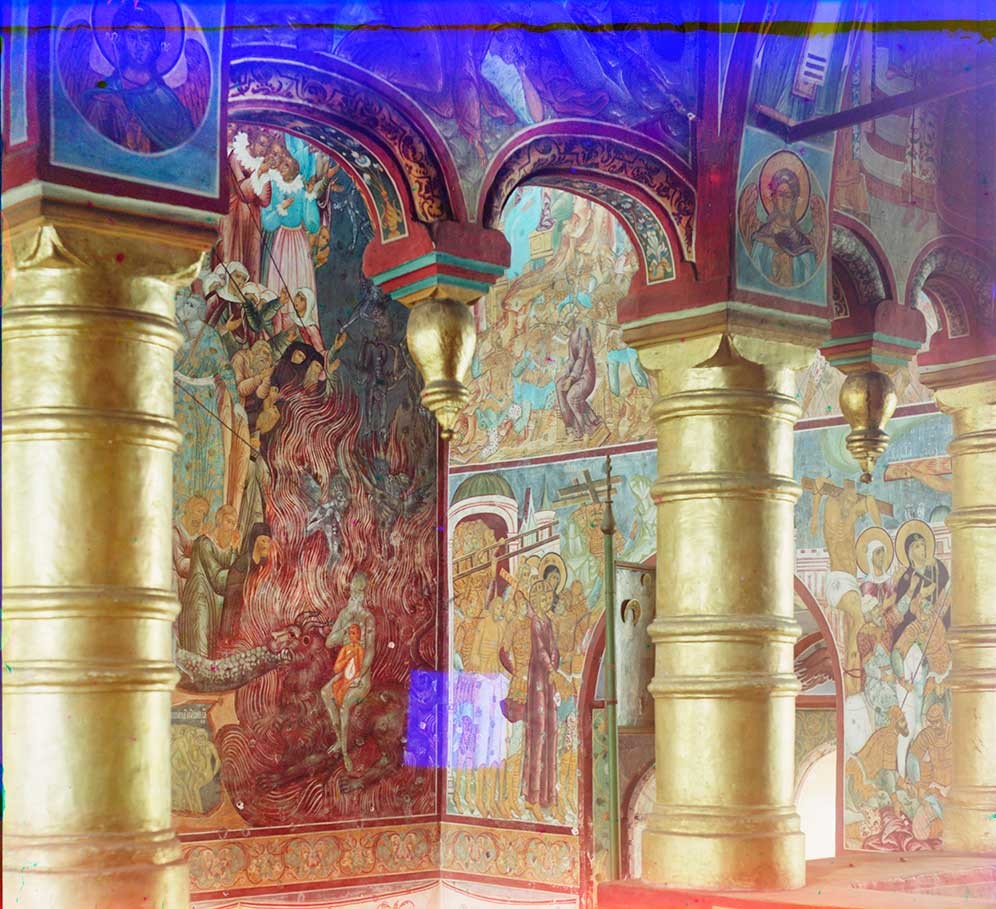 The north and south walls have six registers, of which the upper three contain scenes from the life and parables of Christ. The lower rows depict the Passion of Christ (the events leading to the Crucifixion).

The dome in the center contains a representation known as “Paternitas”: Father, Son and Holy Spirit. On the drum beneath the top of the dome are six archangels together with Prophets. The transition to the ceiling vaults displays the four evangelists: Matthew, Mark, Luke and John. 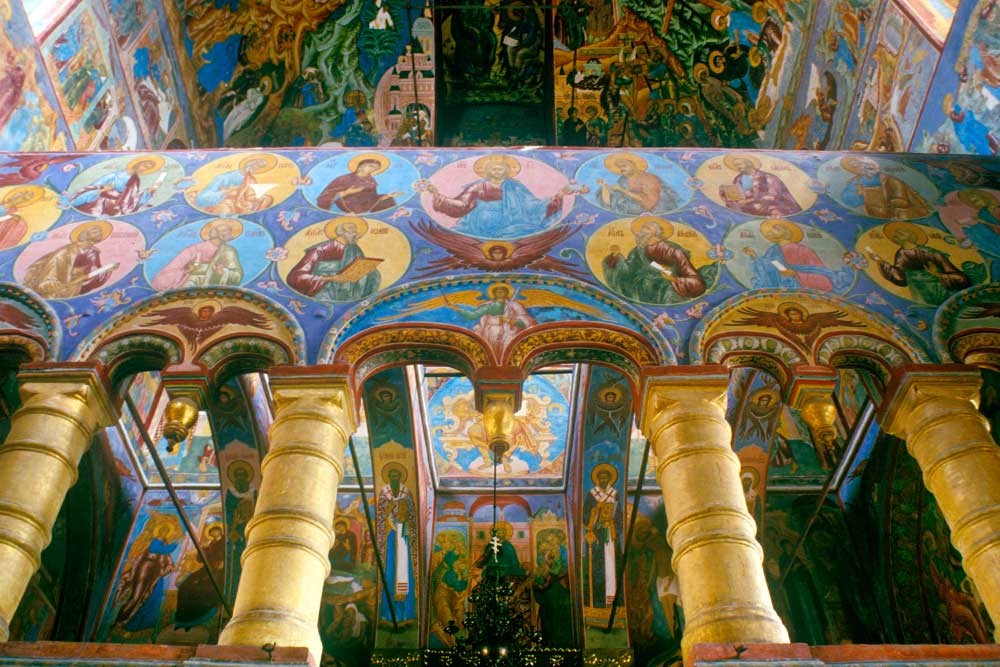 The most visible, and vivid, fresco display is the west wall, with its depiction of the Last Judgment. In the upper center is Christ, seated in glory. Beneath are souls being weighed. The righteous are gathered on the right hand of Christ (the viewer’s left), while the damned are on the opposite side. At the bottom right is a depiction of Satan in hell. 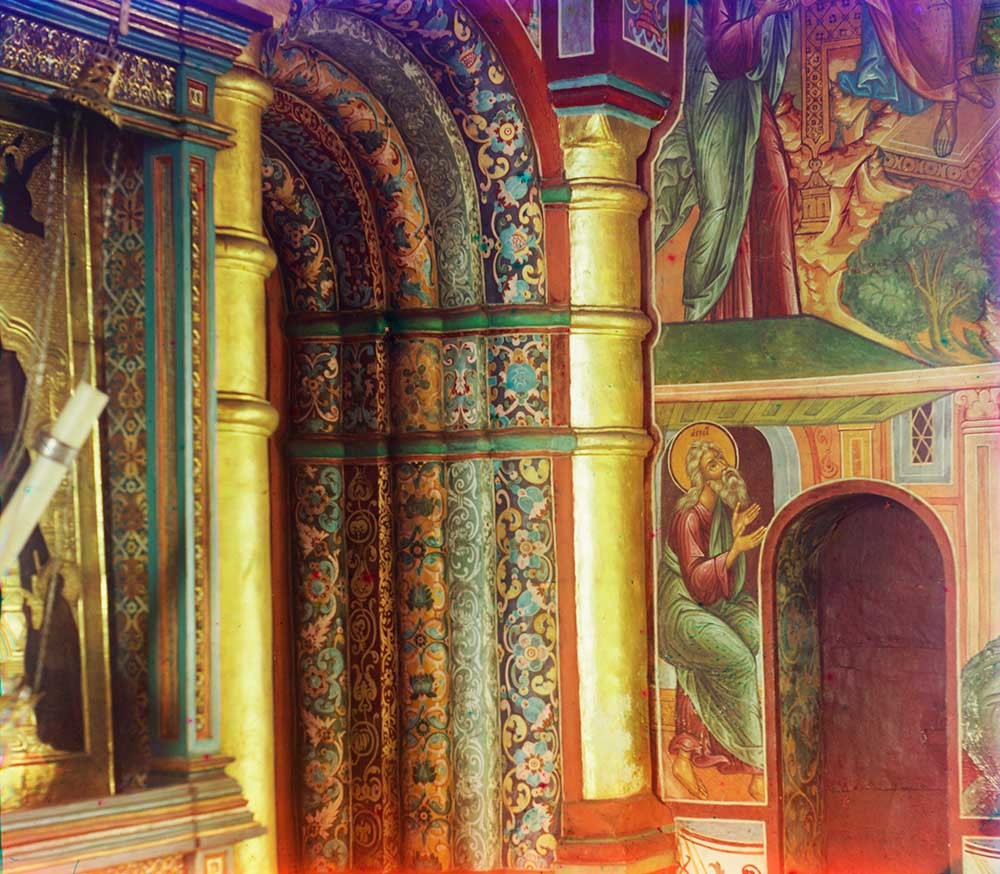 Church of the Savior. Southeast corner with right portal to altar. 1911. 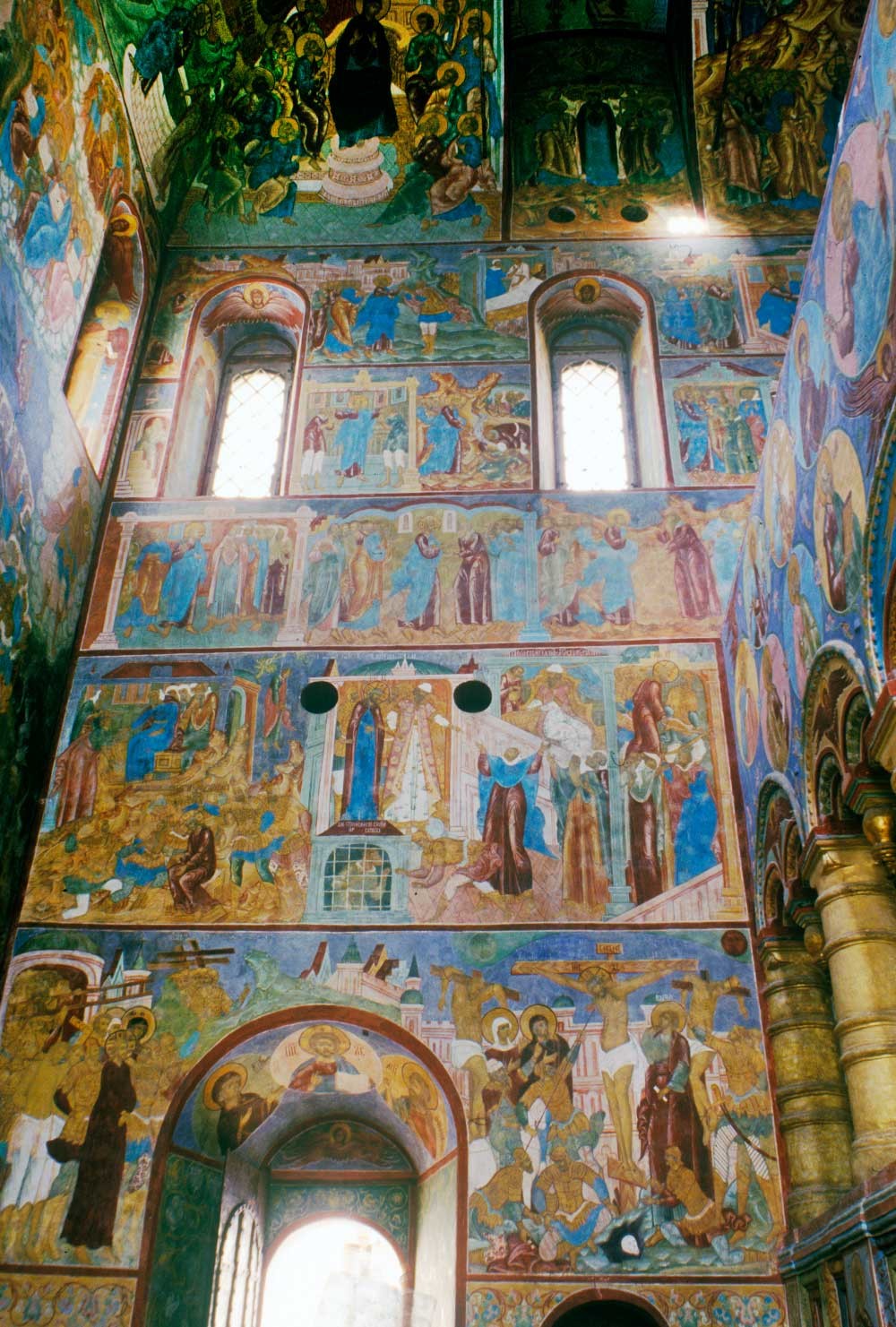 For that preservation, we are fortunate that in the late 19th century Rostov merchants gathered funds to maintain the kremlin ensemble, which had been allowed to deteriorate early in the century. In 1883 the White Chamber, adjacent to the Savior Church and built as a banquet hall for the Rostov Metropolitan, opened as a museum of church antiquities that was the predecessor of the current distinguished Rostov Kremlin Museum. 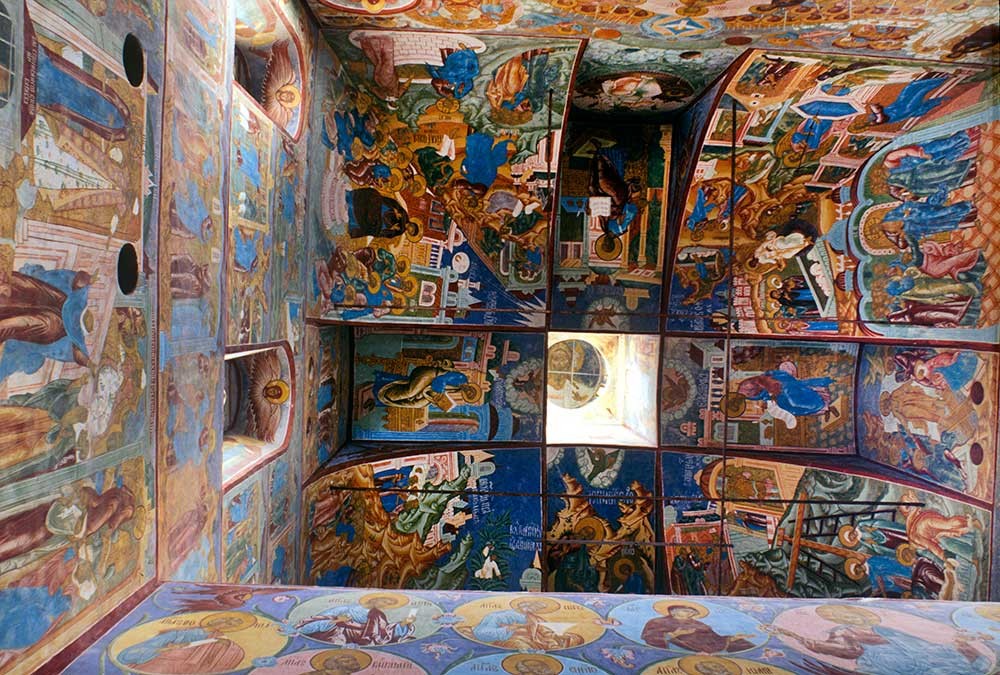