Feodorovskaya Church in Yaroslavl: Built on miracles in turbulent times

Travel
William Brumfield
A striking example of the best of local art and architecture. 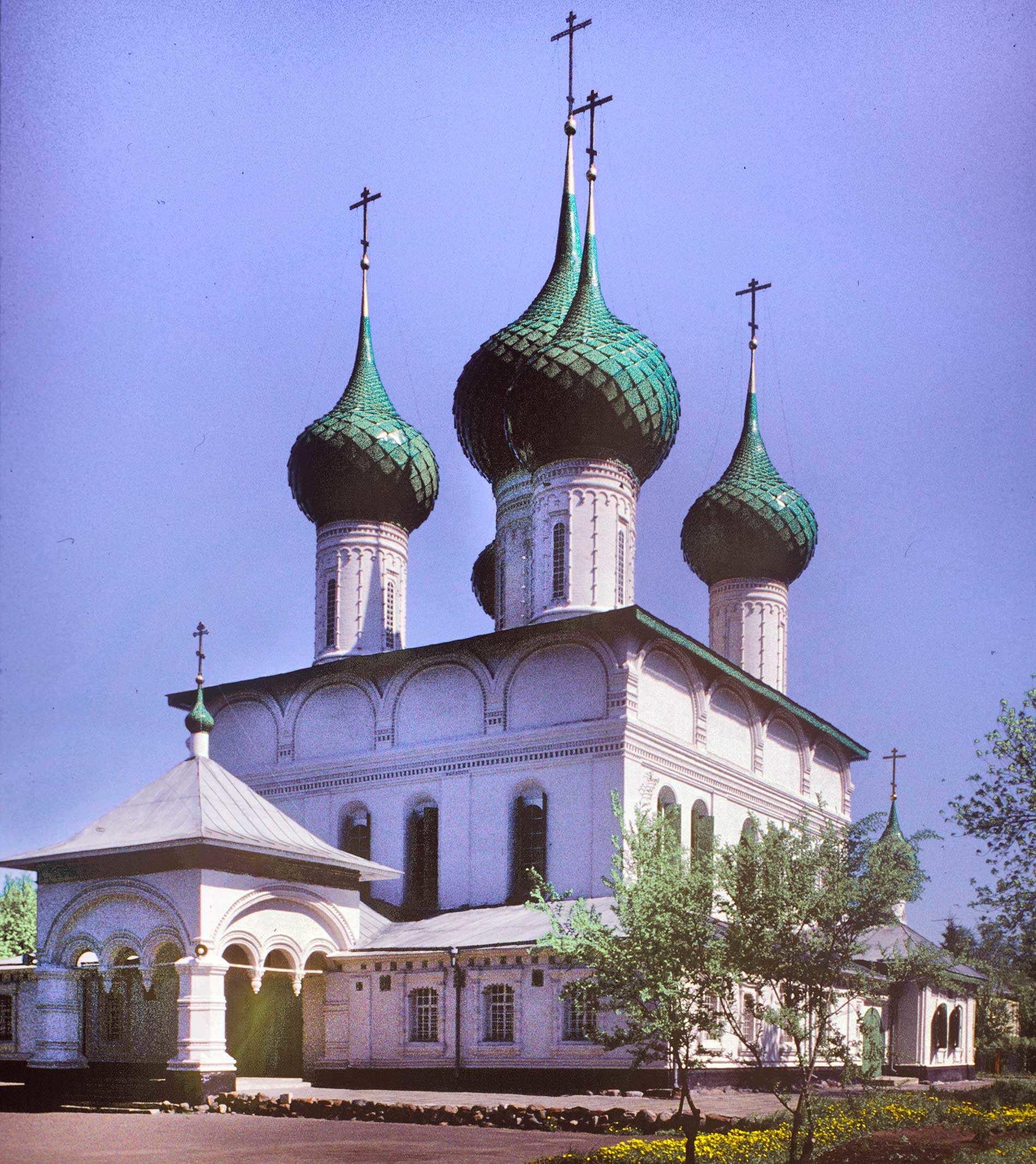 Yaroslavl. Church of the Feodorovskaya Icon of the Virgin. Southwest view. May 22, 1996.

At the beginning of the 20th century, the Russian chemist and photographer Sergei Prokudin-Gorsky devised a complex process for vivid, detailed color photography. His vision of photography as a form of education and enlightenment was demonstrated with special clarity in his photographs of architectural monuments in the historic sites throughout the Russian heartland.

Logistical support for his project came from the Ministry of Transportation, which facilitated his photography on Russia’s waterways and expanding rail network. His trips along the upper and middle parts of the Volga River proved especially productive 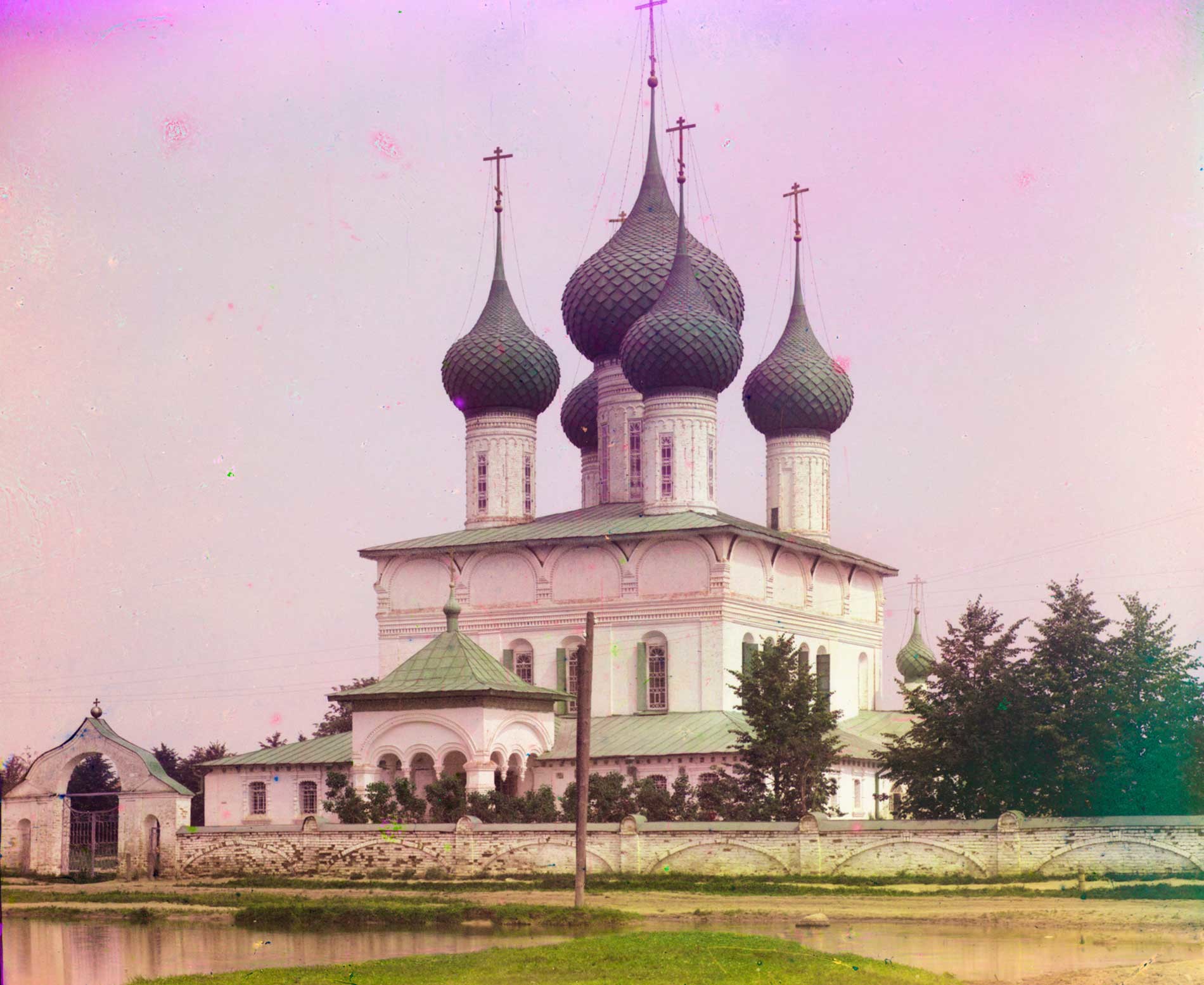 Yaroslavl. Church of the Feodorovskaya Icon of the Virgin. Southwest view. Summer 1911.

the summers of 1910 and 1911, Prokudin-Gorsky photographed in Yaroslavl, today an industrial center of some 650,000 inhabitants located on the Volga about 155 miles northeast of Moscow. My work in the city has extended for three decades, from 1987 to 2017.

Yaroslavl has one of Russia’s greatest concentrations of church art and architecture from the 16th through the 19th centuries. Among the masterpieces that Prokudin-Gorsky recorded is a church ensemble dedicated to a miraculous St. Theodore Icon of the Virgin that is closely associated with the Romanov dynasty. 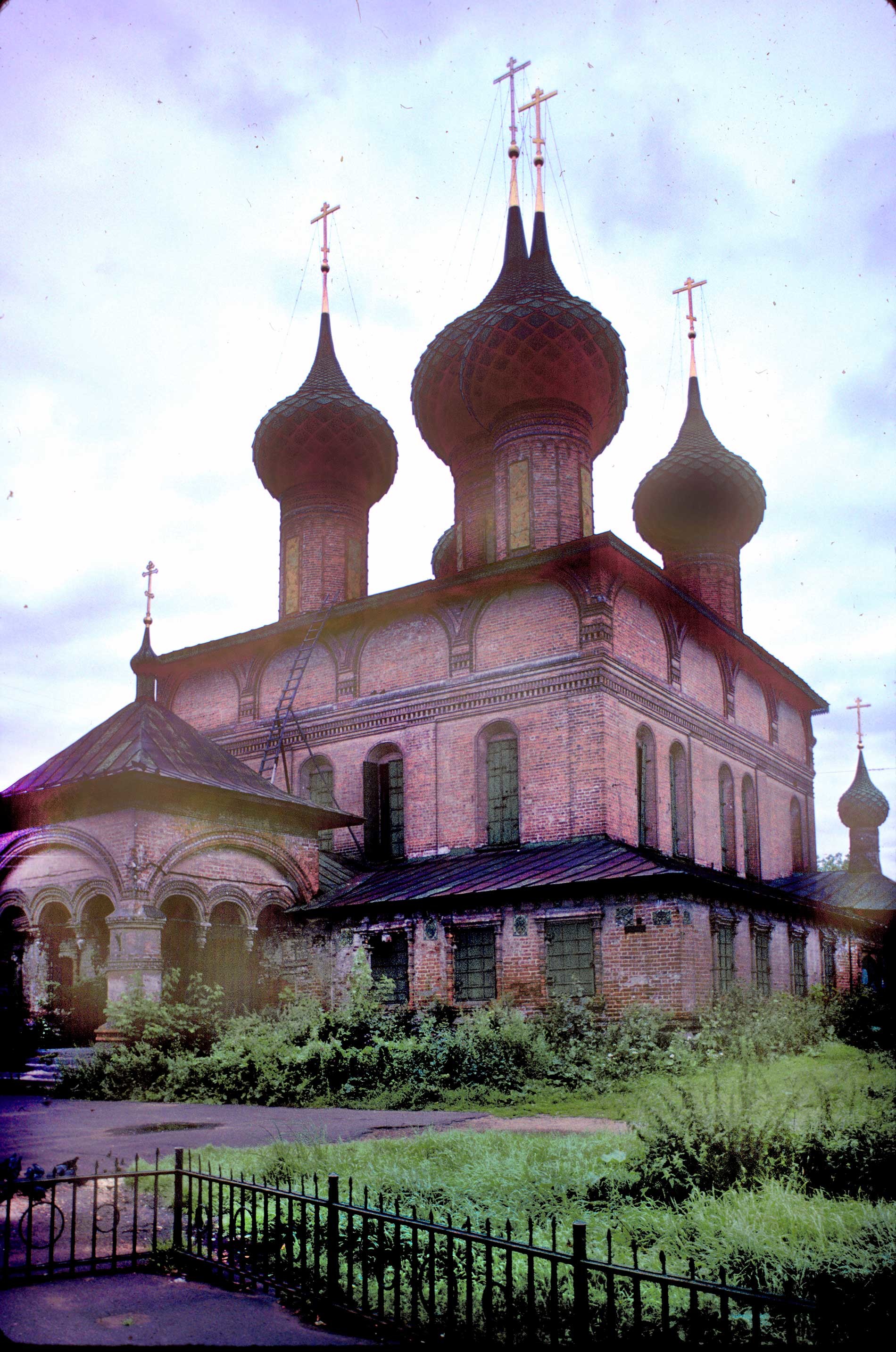 Church of the Feodorovskaya Icon of the Virgin. Southwest view before whitewash was applied. August 7, 1987.

A trading and cultural center

Founded in the early 11th century by Kievan grand prince Yaroslav the Wise – one of the greatest rulers of medieval Rus – Yaroslavl featured monasteries with masonry churches by the beginning of the 13th century. In 1238, the town was sacked by the Mongols during their conquest of central Russia.

Although recovery from Mongol dominance was slow, union with Muscovy in the 15th century integrated Yaroslavl into a larger political and economic structure. The town benefited from its location as a center not only for trade within the vast Volga River but also for exploitation of the forested expanses of the Russian north 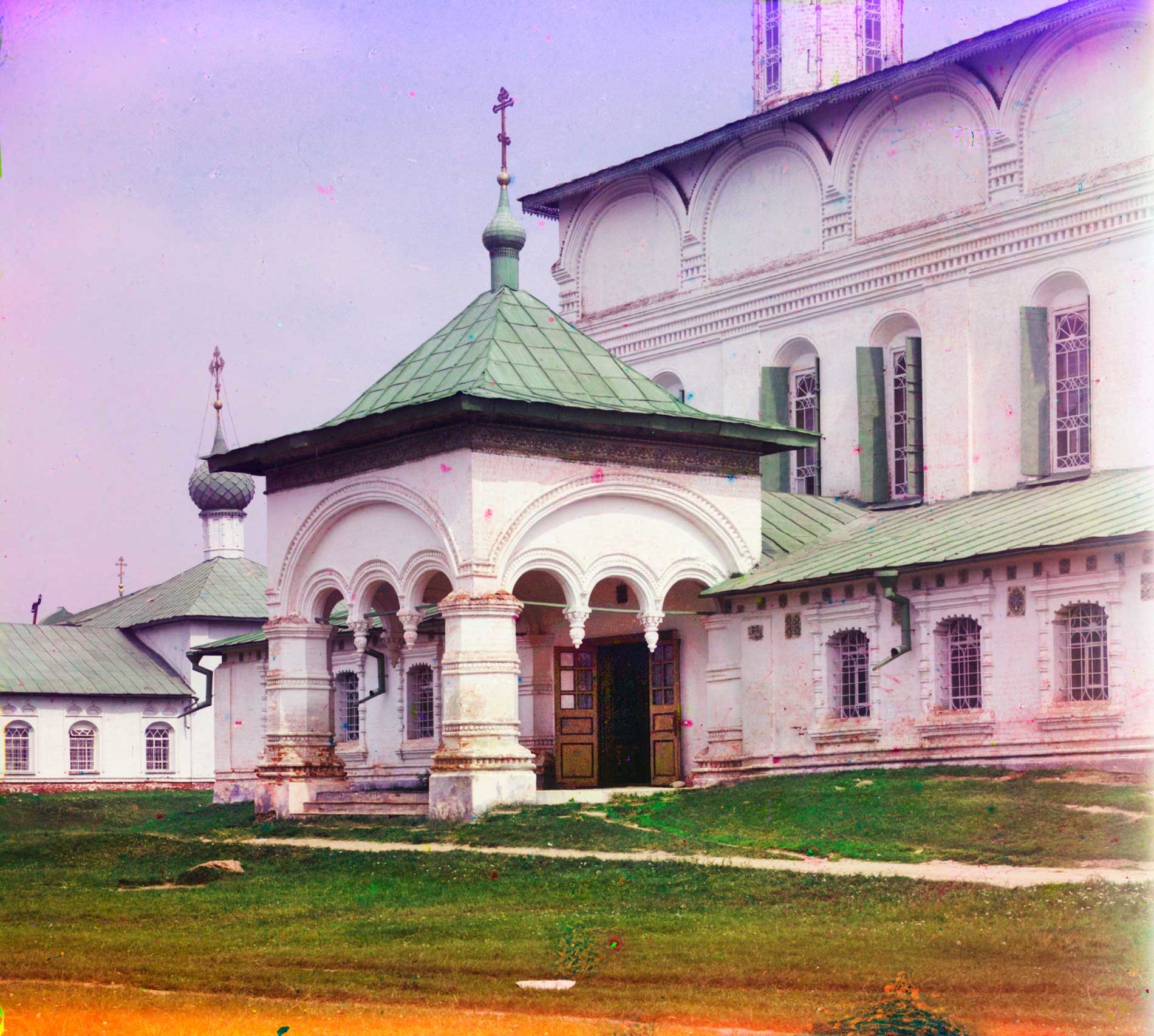 Church of the Feodorovskaya Icon of the Virgin. West facade with main porch. Far left: Church of St. Nicholas "on the Stumps." Summer 1911.

the latter part of the 16th century, Ivan the Terrible established a port at the Archangel Monastery on the Northern Dvina River near the White Sea and thus opened Moscow for commerce with western Europe. This enhanced Yaroslavl’s position within a mercantile network that stretched from the White Sea to Siberia and Asia. With new trading possibilities, Yaroslavl attracted colonies of Russian and foreign merchants (English, Dutch German).

Although spared the worst of the disorder inflicted on Russia in the latter part of Ivan the Terrible's reign, Yaroslavl’s importance as a center of commerce declined during the interregnum following the death of Boris Godunov in 1605. Known as the Time of Troubles, this period of political and social chaos saw much of the country plundered. Yaroslavl eluded the cataclysm, and in 1612 served as a center for rallying national resistance against a Polish occupying force in Moscow.

The active participation of Yaroslavl's merchants in this campaign brought them extensive trading privileges during the reign of Mikhail Fyodorovich, first tsar of the Romanov dynasty. Throughout the 17th century, the city accumulated the wealth necessary to build elaborately decorated churches and also established connections with cultural centers to the west 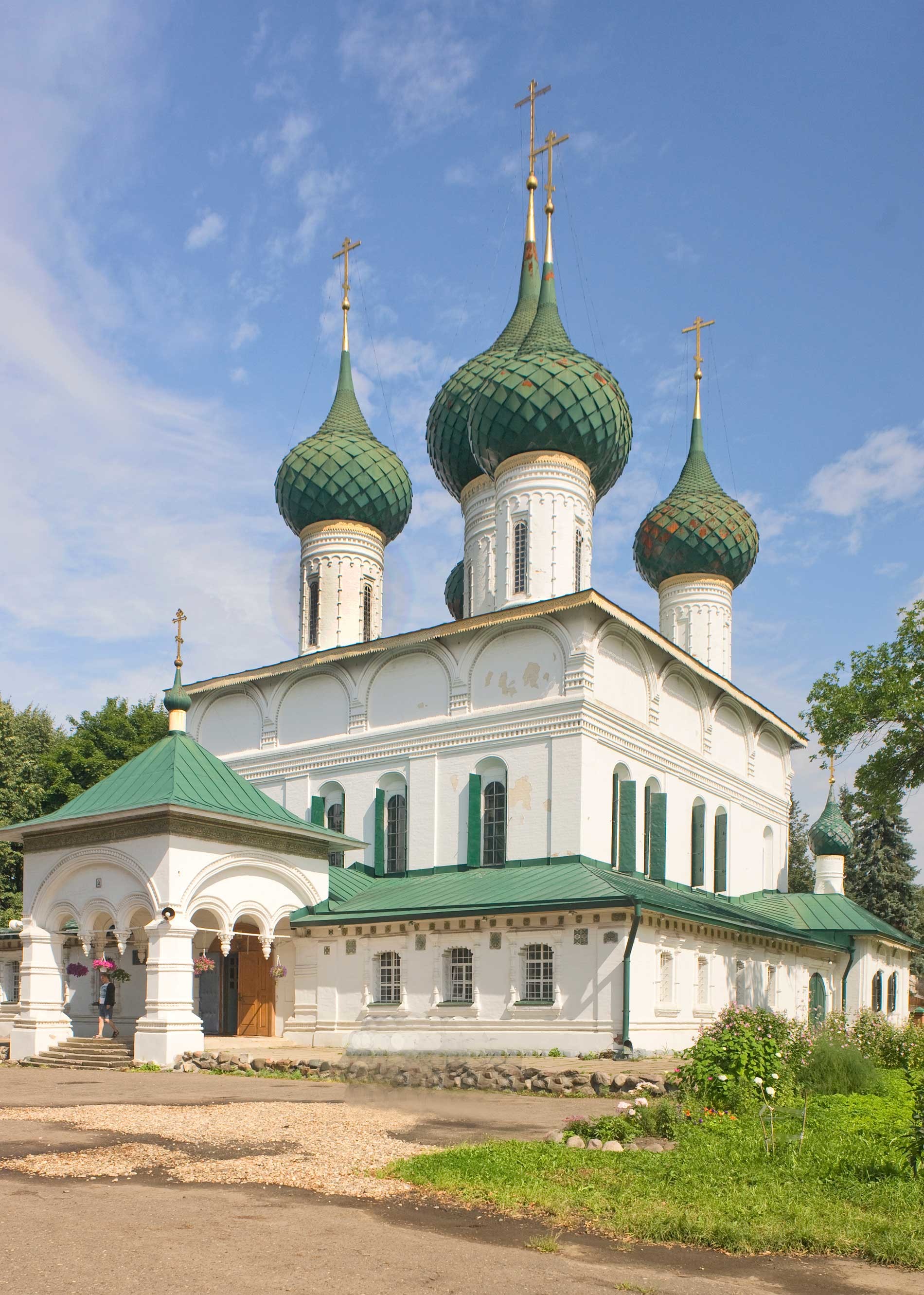 Church of the Feodorovskaya Icon of the Virgin. Southwest view. August 14, 2017.

Moscow could rival Yaroslavl in its concentration of new churches, sponsored by a combination of wealthy merchants, city districts and trade associations. In Yaroslavl during the 17th century, 44 masonry churches were erected within the area’s 35 parishes.

A church built on miracles

An example of this community engagement is the Church of the Feodorovskaya Icon of the Virgin, built in 1682-1687 and considered among the town’s notable monuments. Miracles surround this church. The dedicatory icon, linked to the legendary warrior and martyr St. Theodore Stratelates (281-319), was particularly revered by the Romanovs, who considered it their protector. 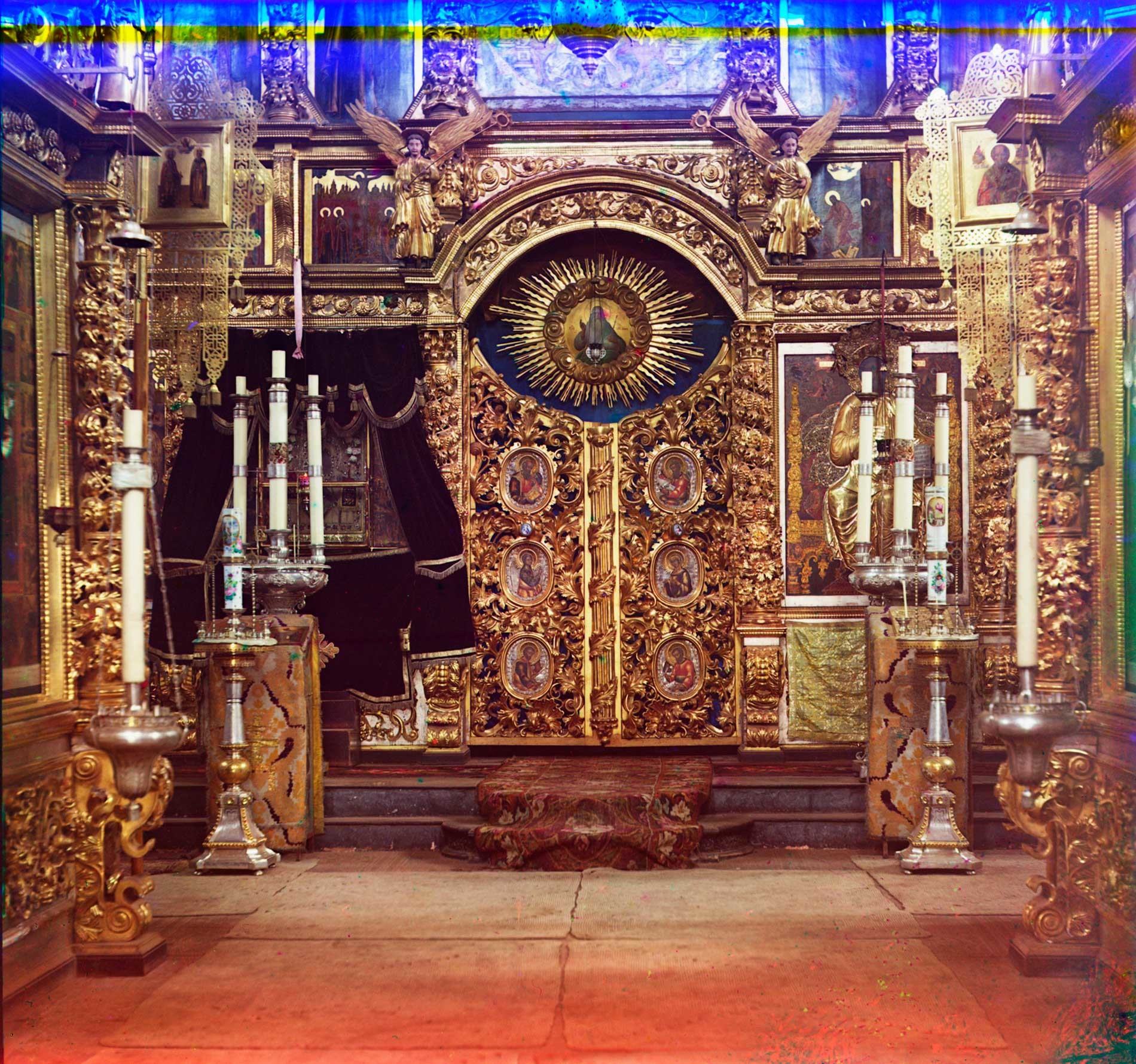 Church of the Feodorovskaya Icon of the Virgin. Icon screen with Royal Gate (entrance to altar). Summer 1911.

The church’s site was occupied by the parish of the wooden Church of St. Nicholas “on the stumps” ( Penye), a reference to remnants of a tree grove felled to build the church in the 1660s. Local lore recounts that a parishioner, the merchant Ivan Pleshkov, fell ill in 1669 and was cured following a pilgrimage to the nearby town of Kostroma to see the revered prototype of the Feodorovskaya Icon. 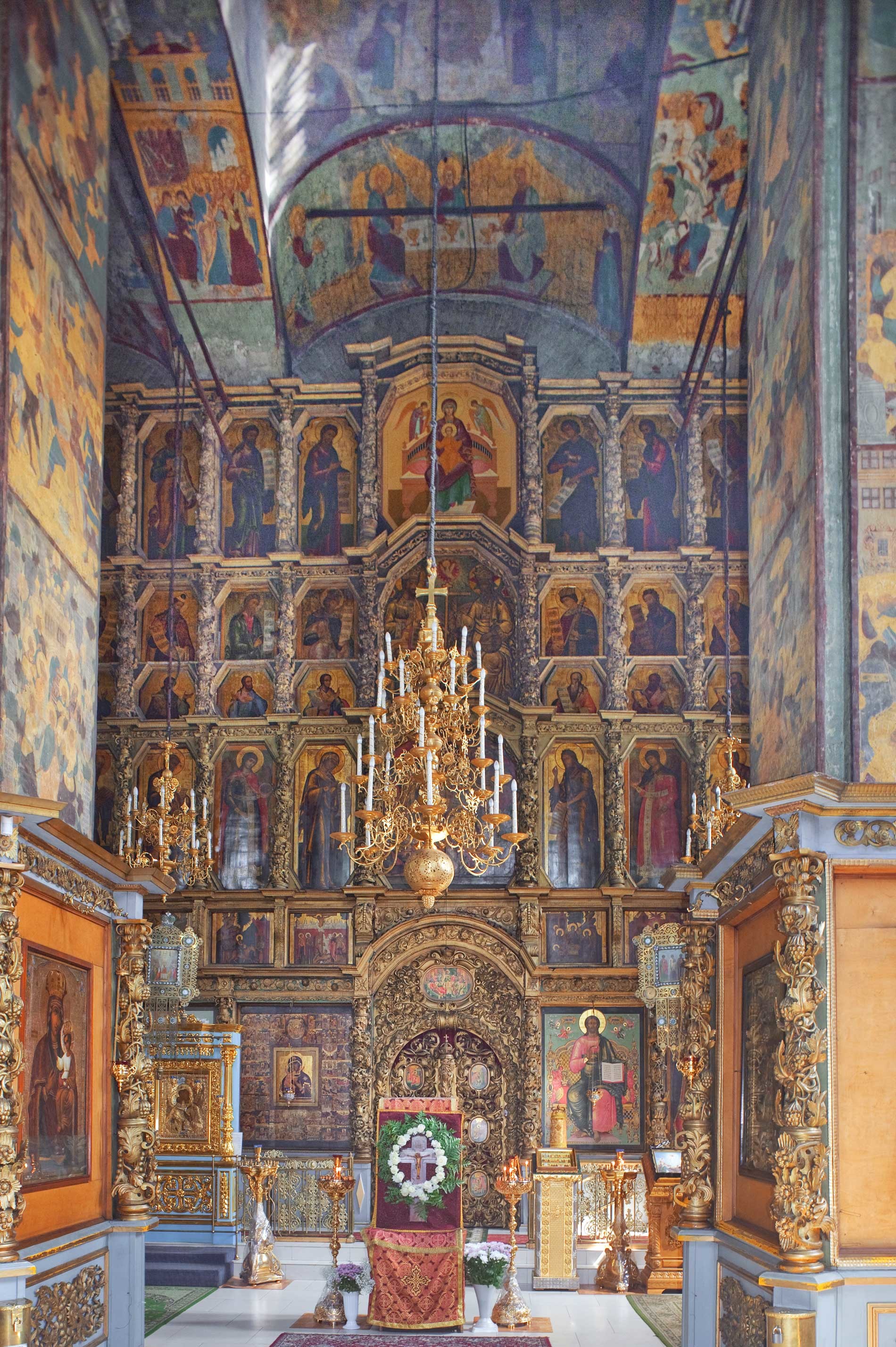 Church of the Feodorovskaya Icon of the Virgin. Interior, view east toward icon screen. August 14, 2017.

In gratitude, Pleshkov ordered a copy of the icon from the renowned painter Gury Nikitin and vowed to build a masonry church at the parish to house the image, which acquired fame for its miraculous curative properties. Another merchant donated land for the new church, located near the right bank of the Kotorosl River. The parishioners provided additional support, determined the general plan of the church and dug foundation trenches that contained logs supporting large stones. 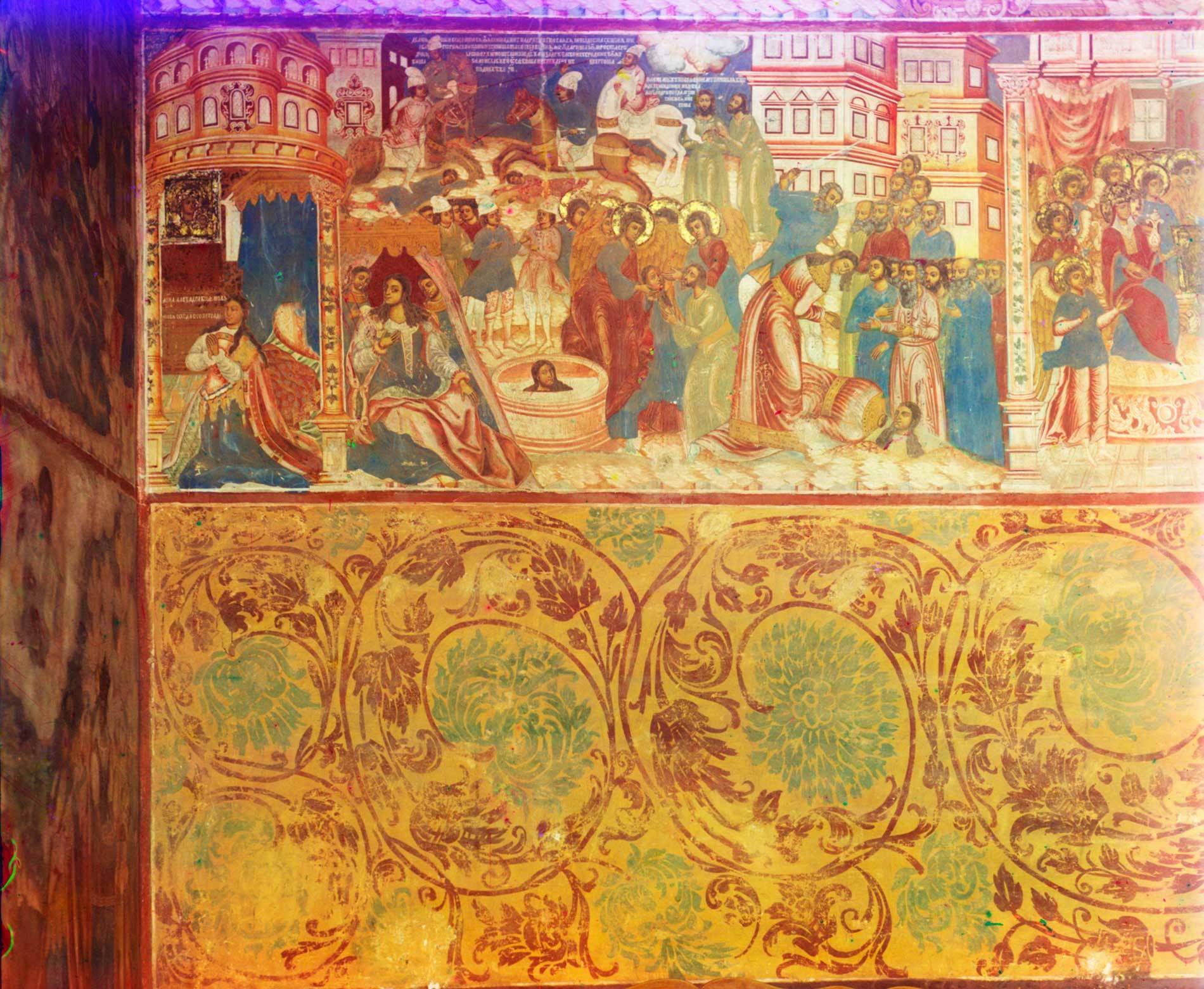 Church of the Feodorovskaya Icon of the Virgin. North wall, fresco depicting conversion and martyrdom (beheading) of St. Alexandra of Rome. Summer 1911.

After this preliminary work, master builders were hired to complete the church, including a low 4-sloped roof placed above semicircular decorative gables. The structure follows the best forms of 17th-century Yaroslavl architecture. Its clear whitewashed brick form, encased in a one-story gallery, has many decorative accents, such as the porch leading to the main entrance, which Prokudin-Gorsky photographed separately.

The most striking feature of the structure is the soaring ensemble of five cupolas supported on slender cylinders, or “drums.” When the church’s tall gilded crosses are included, the height of the structure above the roofline exceeds that of the main cuboid structure. This characteristic feature of late 17th-century Yaroslavl architecture is especially clearly delineated here 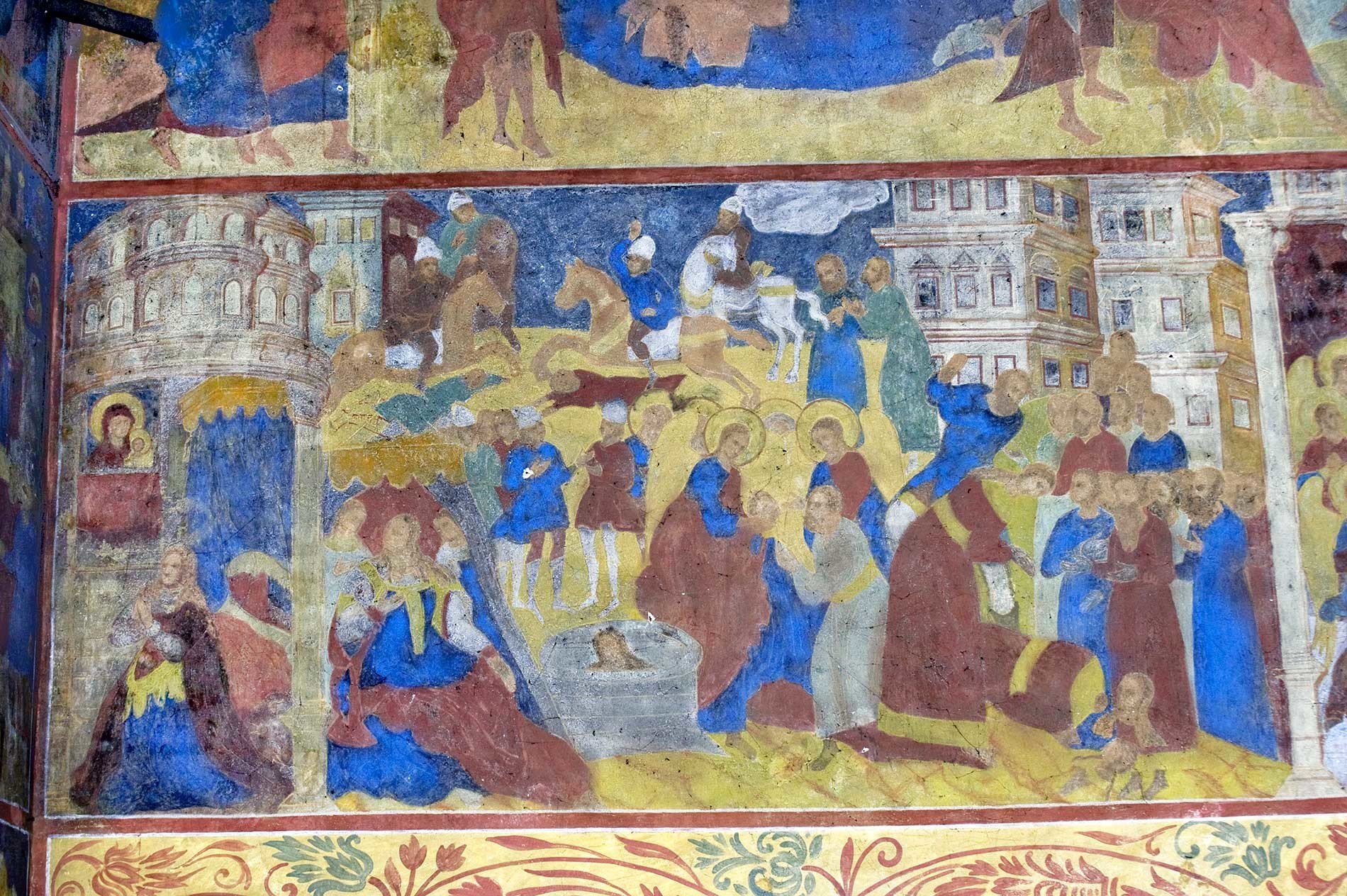 Church of the Feodorovskaya Icon of the Virgin. North wall, fresco depicting conversion and martyrdom of St. Alexandra of Rome. August 14, 2017.

several photographs of the church include an evocative southwest view across a small pond. In my photographs from the same perspective, the pond has disappeared under .

Prokudin-Gorsky also photographed the church Interior, including the grand icon screen. His view shows the central part of the first row of this work of art, begun in 1705 with substantial support from wealthy parishioners such as the Yeremin brothers, a prominent local merchant dynasty. My photographs from 2017 show the same space with limited changes. 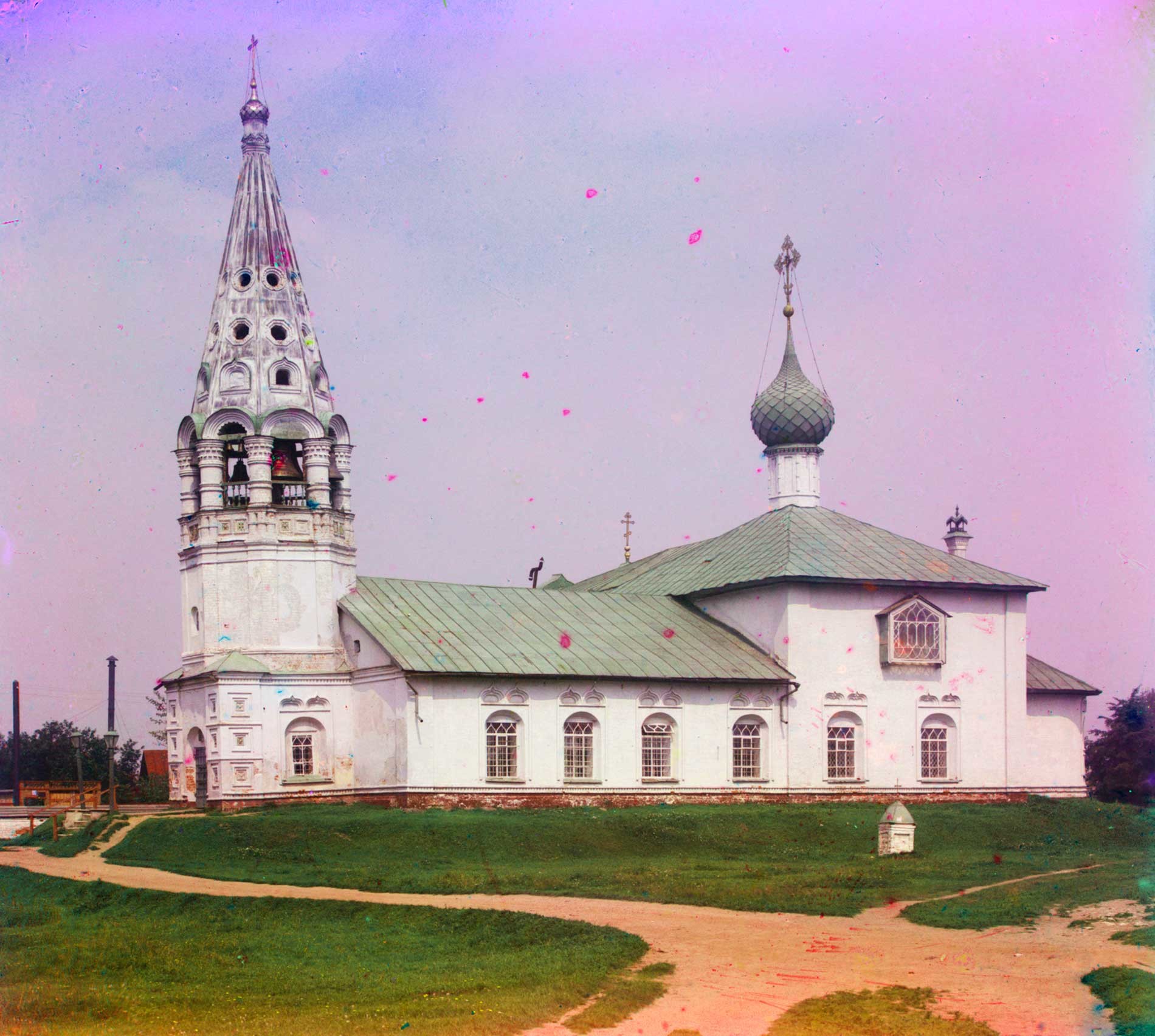 The Royal Gate in the center was carved in 1714 by Vasily Komar and leads to the main altar in the apse at the east part of the church. The medallions in the top and bottom rows display the four Evangelists, while the center row shows the Annunciation (Gabriel and Mary), with an image of Lord God Sabaoth above. To the right is a large icon of the Savior. The row above contains smaller square icons depicting holy days such as the Crucifixion. The Royal Gate arch is flanked by statues of angels. The elaborate carving includes twisted columns in a grapevine pattern.

In 1715, the merchant Ioann Yeremin donated an enormous sum for wall paintings by a group of Yaroslavl artists led by the icon painters Fyodor Ignatiev and Fyodor Fyodorov. The frescoes were completed on June 28, 1716, 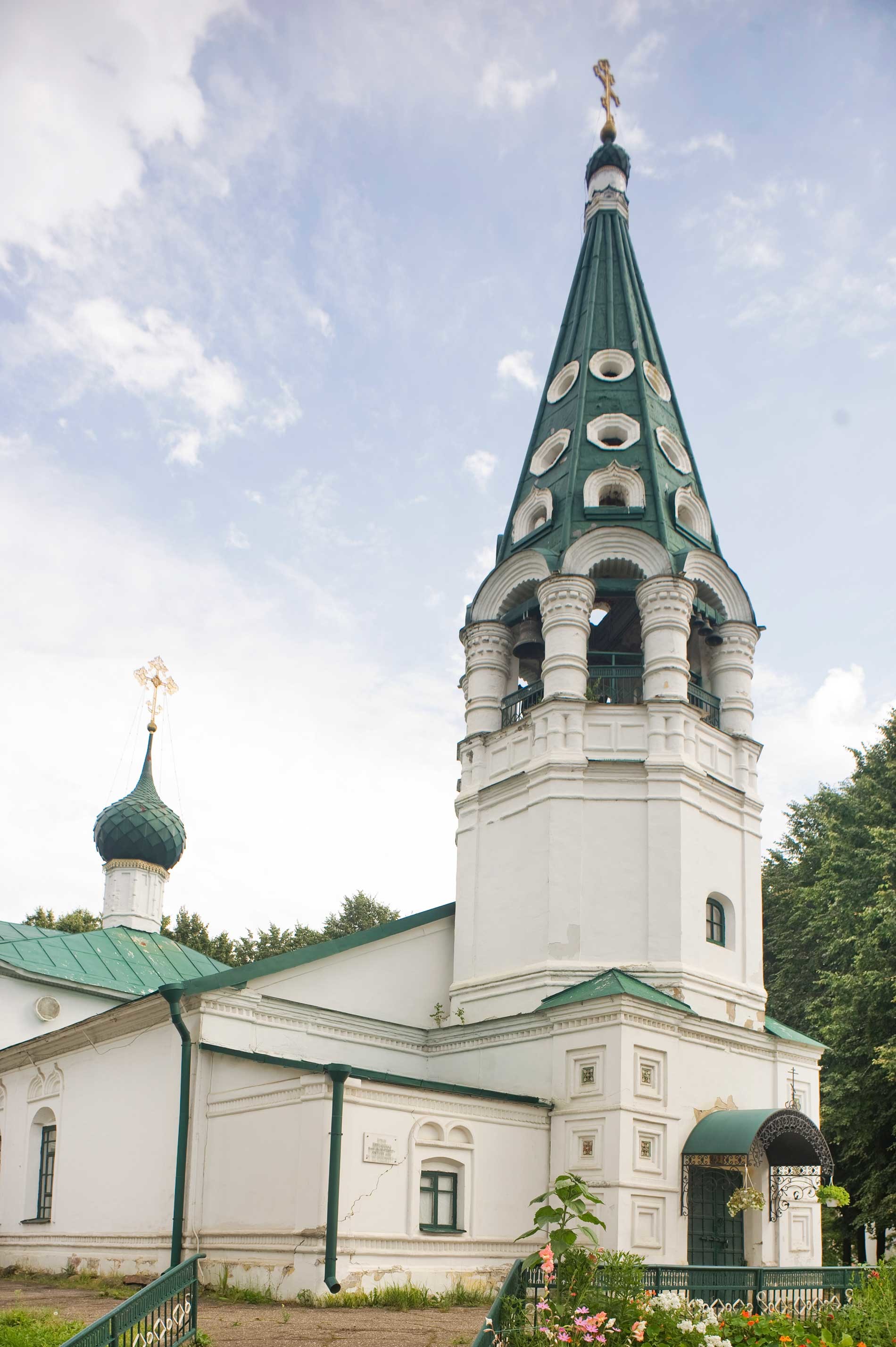 The second of Prokudin-Gorsky’s interior views shows a fresco depicting the conversion and martyrdom (beheading) of St. Alexandra of Rome, identified in some accounts as the wife of Diocletian. She is said to have accepted Christianity after witnessing the faith of St. George, who appears to be in the center of the composition. Beneath the fresco is a decorative band consisting of a foliate arabesque.

Prokudin-Gorsky also photographed the adjacent Church of St. Nicholas, rebuilt in brick just to the north in 1689-91 to serve as the parish “winter church,” whose simple low form could be more easily heated. Attached to the west end of the structure is a belfry culminating in a “tent” tower with tiered openings to amplify the sound of the bells. This was the only church in the central part of Yaroslavl to remain open throughout the Soviet period. 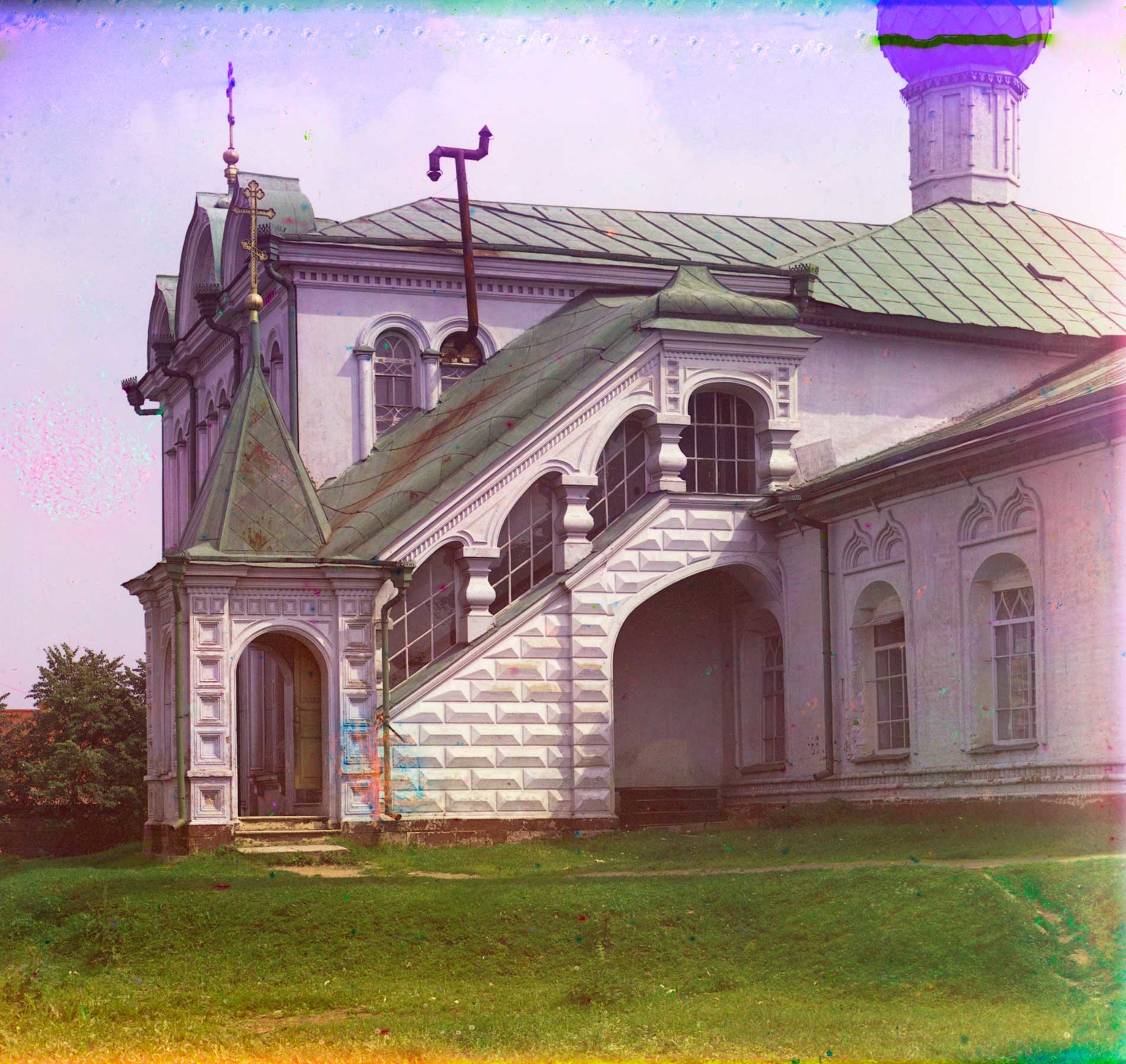 His second photograph of the St. Nicholas Church shows the decorative north façade, with a chapel built in 1890 to contain altars dedicated to St. Sergius of Radonezh (lower level) and St. Nicholas. The arched elevated stairway to the St. Nicholas chapel demonstrates a 17th-century Yaroslavl style. The extension itself is designed in the late 19th-century Russian Revival style.

During the Soviet period, the Church of the Feodorovskaya Icon was ransacked and its interior was damaged. (At one point it was converted to housing.) In 1987, regional authorities returned it to the Russian Orthodox Church. Soon thereafter it became the main cathedral of the Yaroslavl Diocese until the Dormition Cathedral in the city’s center was rebuilt. Today the church ensemble once again serves as the center of an active parish. 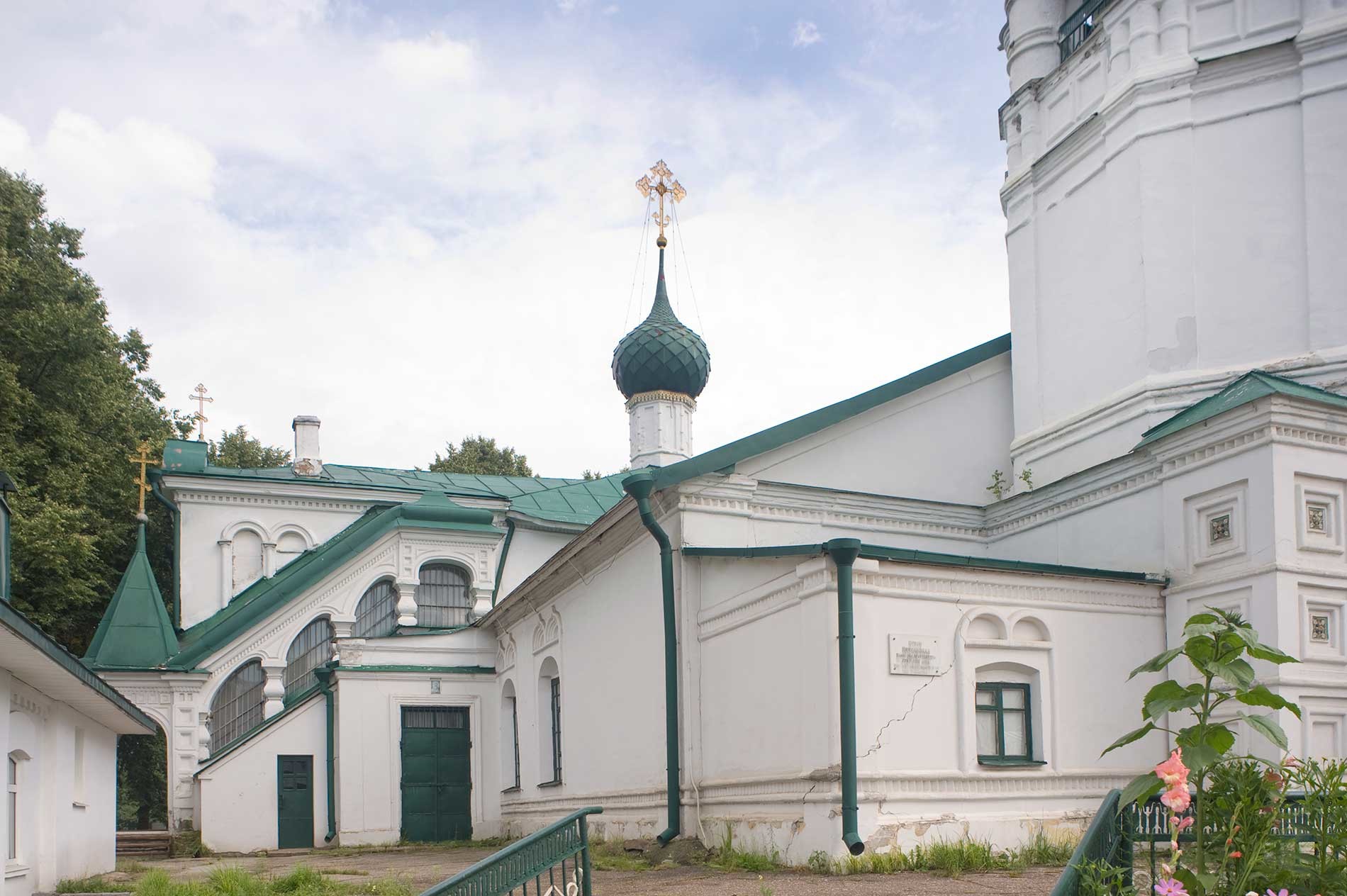