Explore the transformation of Yekaterinburg through the years 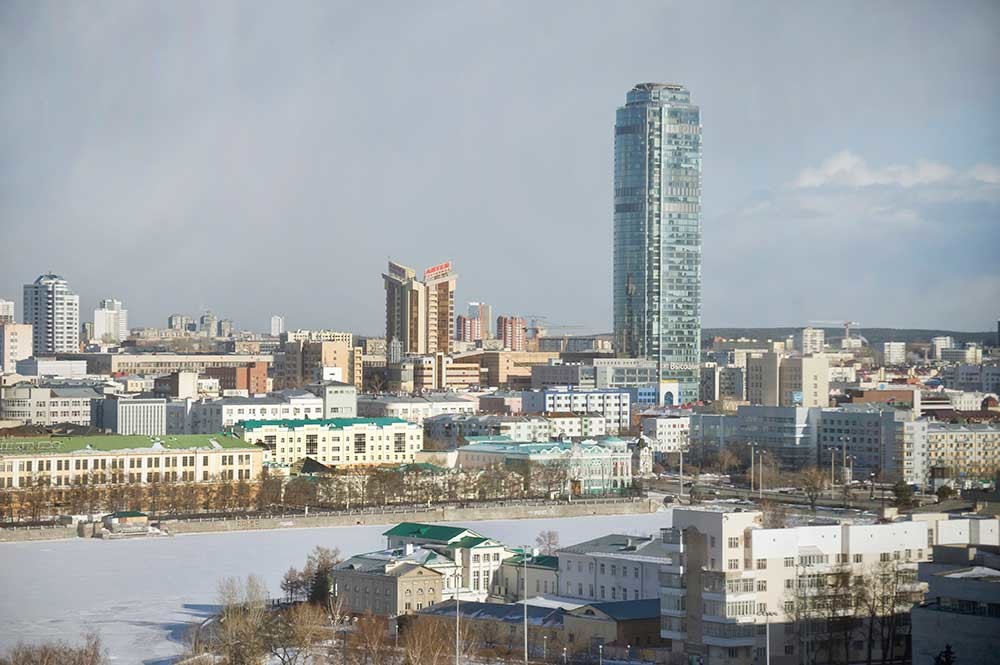 At the beginning of the 20th century, the Russian chemist and photographer Sergei Prokudin-Gorsky developed a complex process for vivid, detailed color photography. His vision of photography as a form of education and enlightenment was demonstrated with special clarity through his photographs of architectural monuments on historic sites throughout the Russian heartland.

In May 1909, Tsar Nicholas II invited the photographer to the imperial residence at Tsarskoe Selo to show his images of Russia through an elaborate projector. Following this presentation, Prokudin-Gorsky gained the support of the imperial court to continue his travels. This august patronage accelerated the pace of the photographer’s work. 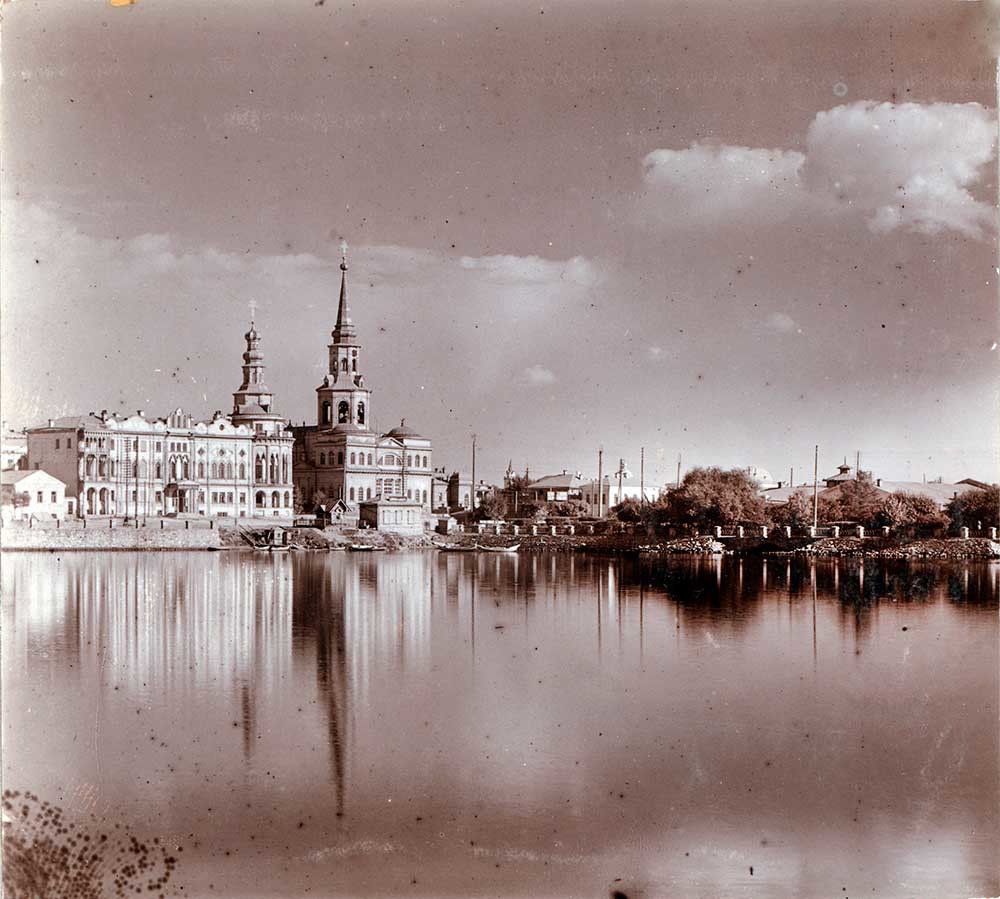 Among Prokudin-Gorsky’s expeditions during the summer of 1909 was the first of his journeys to the Ural Mountains. Traveling with the logistical support of the Ministry of Transportation, he took views ranging from wild nature to large factories.

Prokudin-Gorsky devoted much attention to Yekaterinburg, a major Urals industrial and administrative center. Known during the Soviet period as Sverdlovsk (from 1924 to 1991), Russia’s fourth largest city has witnessed transformations over the past century that are especially vivid in comparison to Prokudin-Gorsky’s photographs. 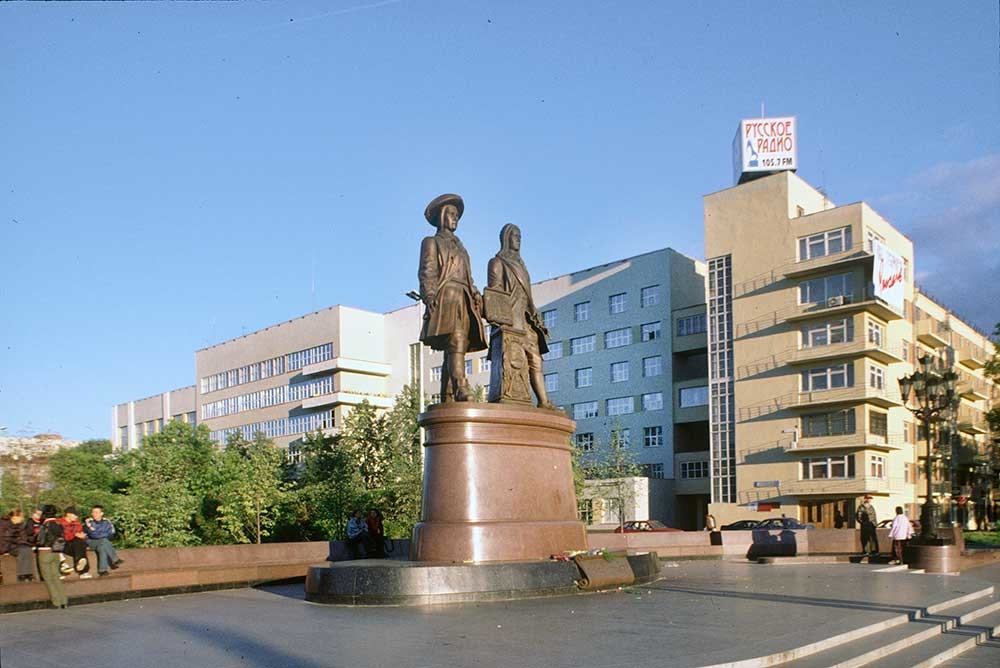 My first visit to the area occurred nine decades after Prokudin-Gorsky’s, in late summer of 1999. A return trip to Yekaterinburg in the spring of 2017 revealed the striking results of a recent building boom.

A city of merchants and miners

Founded in 1723, Yekaterinburg (“Catherine’s City”) was named after Peter’s second wife, Catherine. Upon his death in 1725, she became the first woman to rule the Russian Empire. Catherine I’s brief reign, which lasted only from 1725 to 27, represented a continuation of Peter’s modernizing policies. 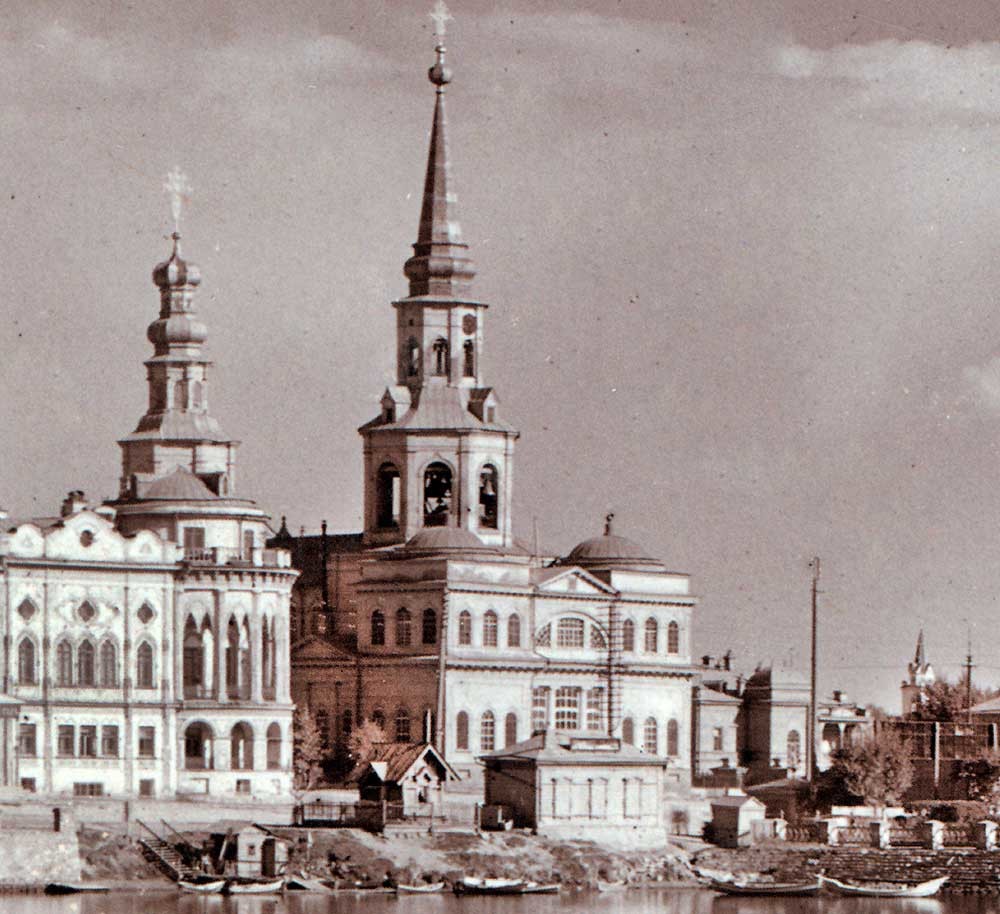 The rich material on Yekaterinburg in the Prokudin-Gorsky collection includes several views of City Pond, a defining feature in the urban landscape. The pond was created in 1724 when the engineer Georg Wilhelm de Gennin (Hennin) dammed the Iset River to create a source of energy for an iron factory established by the order of Peter the Great in 1723. Prokudin-Gorsky’s view of the southeast tip of City Pond is of special historical interest. Although the original glass negative is missing, a reproduction from an album of his contact prints focuses on the Cathedral of St. Catherine, built in from 1758 to 1768 and demolished in 1930. 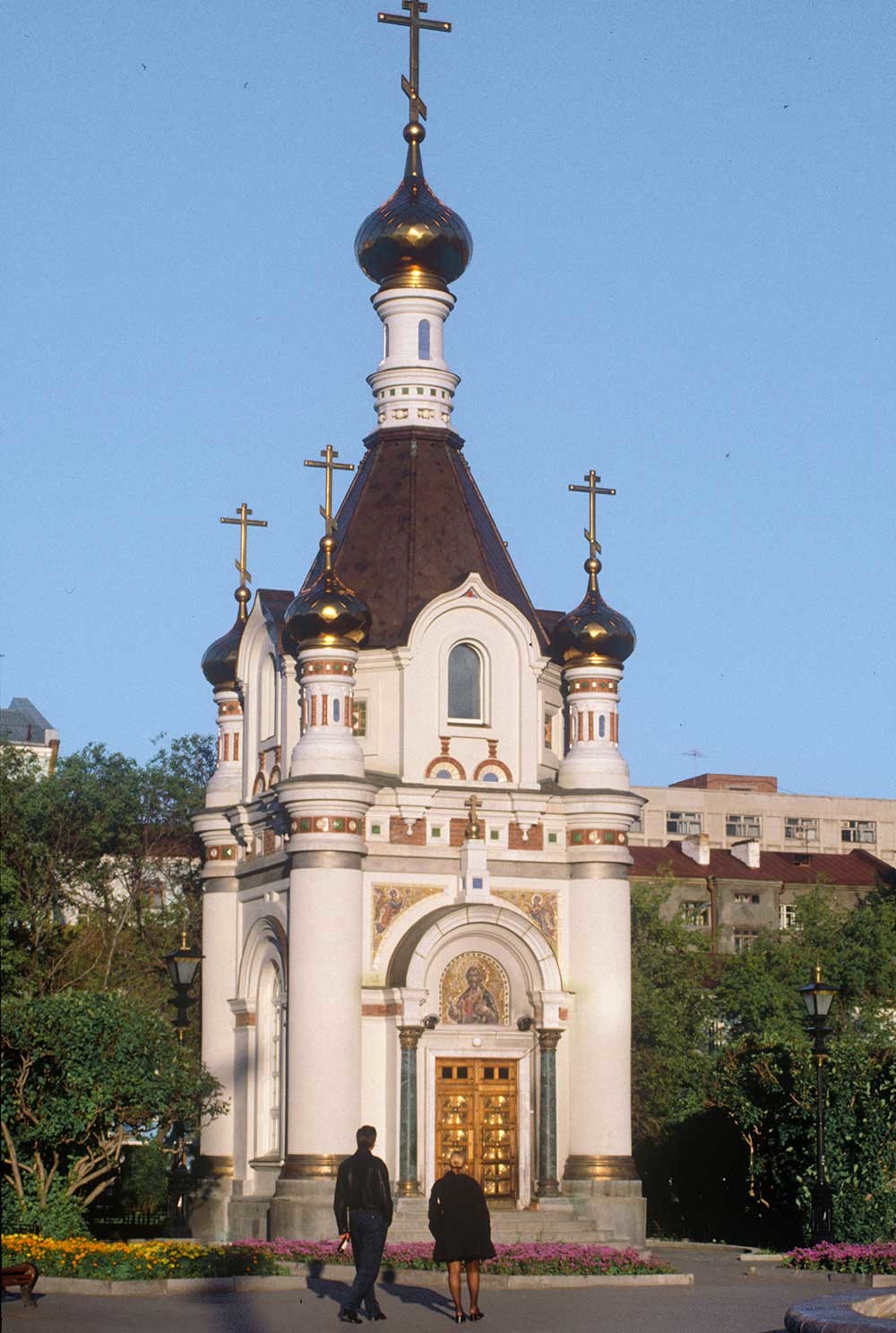 Originally constructed in 1726 and destroyed by fire in 1747, the mid-18th-century cathedral photographed by Prokudin-Gorsky had a design reminiscent of the early baroque style prevalent during the reign of Peter the Great. The main sanctuary was crowned with a tiered tower and dome, while the large structure at the west end supported a soaring bell tower and spire that marked the center of town.

The destruction of the St. Catherine Cathedral was a severe blow to the city’s architectural heritage. The cathedral site became part of a small park known as Labor Square located on Lenin Prospekt. The park has a fountain constructed in 1962 and a statue erected in 1998 of the city’s founders - the prominent historian and geographer Vasily Tatishchev and Georg de Hennin. 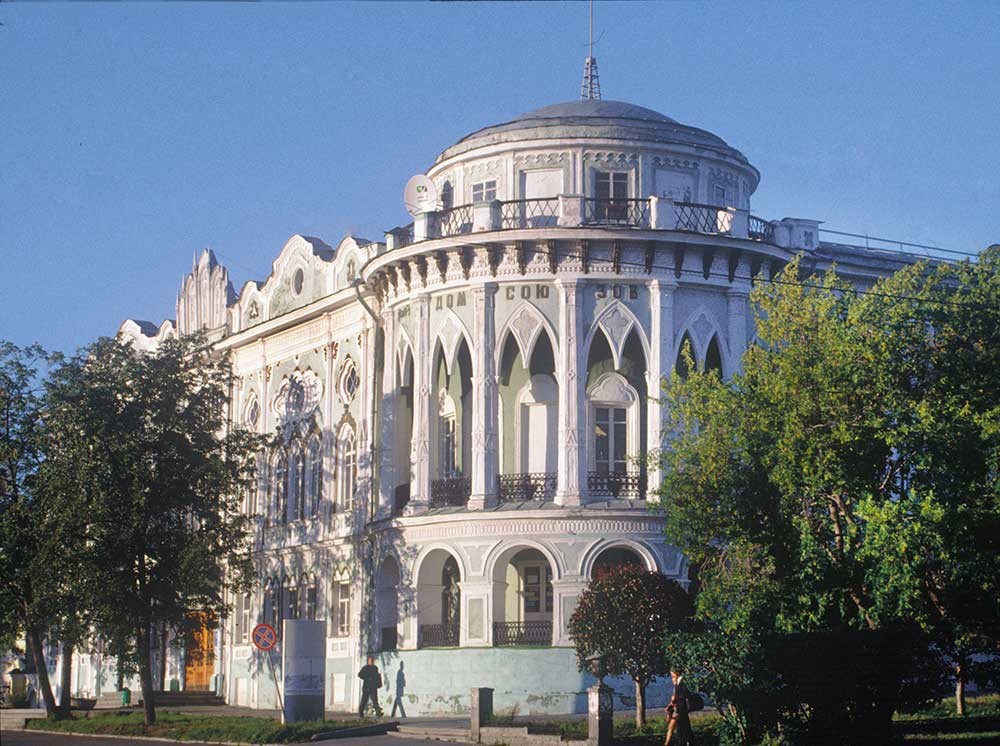 The cathedral site is now graced by the Chapel of St. Catherine, a slender structure erected in 1998 on the occasion of Ekaterinburg’s 275th anniversary. A proposal in 2010 to reconstruct the St. Catherine Cathedral led to extensive public discussion, and the idea was replaced in 2016 by a project to build at another location and in a different style.

From pseudo-gothic mansions to modern high-rises

The left half of Prokudin-Gorsky’s historic view across the lower pond is occupied by Sevastyanov House, one of Yekaterinburg’s most distinctive buildings. The imposing three-story mansion was built in the early 19th century in a neoclassical style with a typical corner rotunda. In 1860, the mansion was acquired by a wealthy government official, Nikolai Sevastyanov, who rebuilt it in 1866. The profusely ornamented facades display a pseudo-Gothic pastiche created by Alexander Paduchev, who studied with prominent local architect Mikhail Malakhov. When Sevastyanov received a promotion to St. Petersburg, the house was converted for use as the Regional Court. 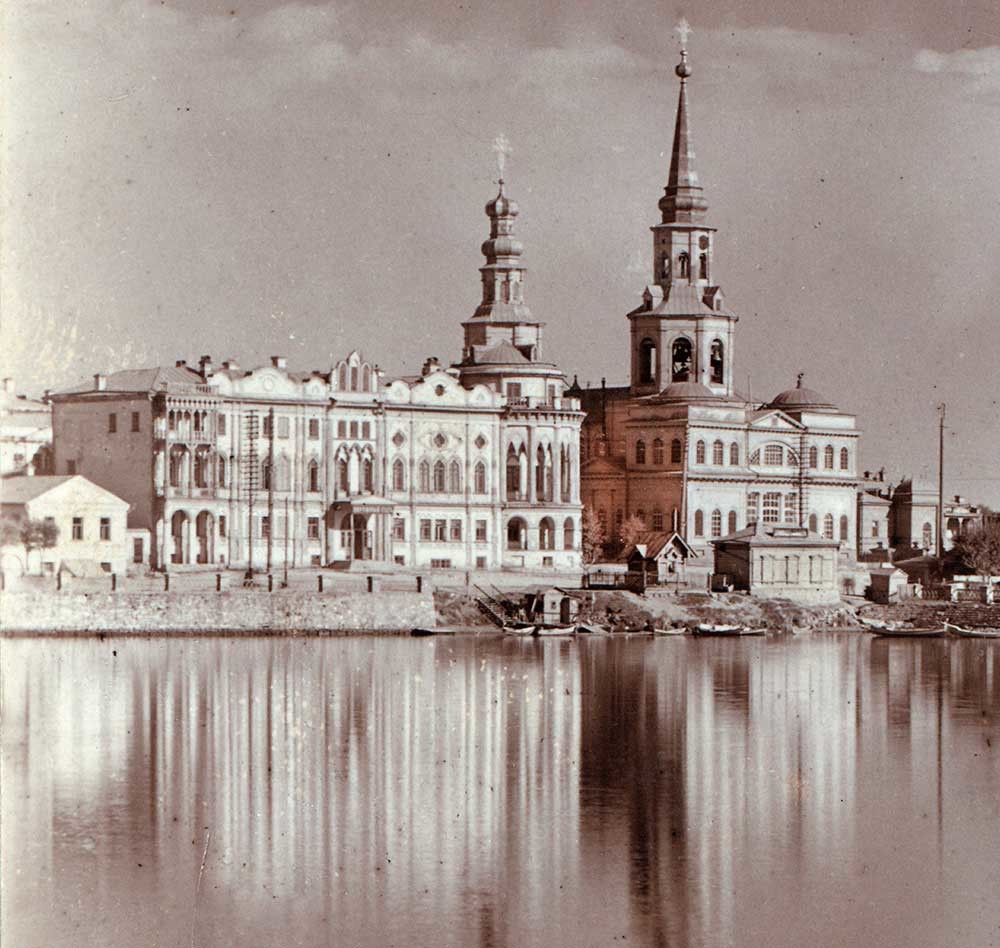 The building was ransacked during the revolutionary disorders of 1917 and served as the Trade Unions Building during the Soviet period. In 2008 the exterior was restored and the interior rebuilt as a presidential residence for major state functions such as the 2013 Russia-EU summit meeting.

My view of the same area, taken in the spring of 2017 from the 14th floor of a modern hotel, shows the startling transformation that occurred as a result of the building boom at the beginning of the 21st century. Especially prominent is the 54-story Vysotsky Building, opened in 2011 and named in honor of the popular Russian bard Vladimir Vysotsky. A number of historic houses were demolished to make way for this tower. 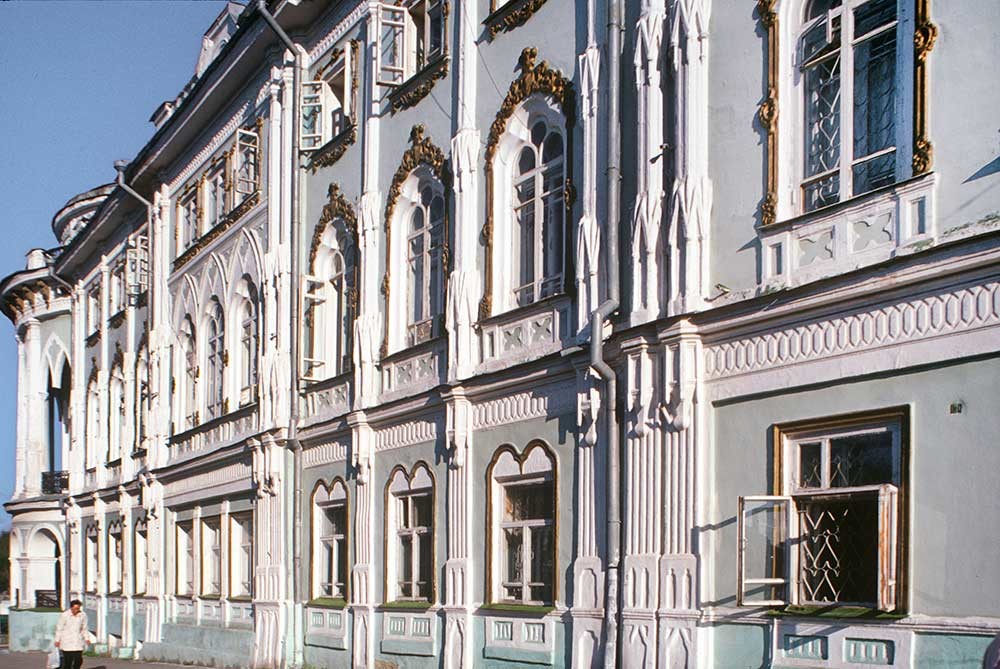 Despite these many changes, my 2017 photograph shows Sevastyanov House, as well as the back of the neoclassical mansion of the chief mining Director of the Ural State Factories (Director of Mines). Prokudin-Gorsky’s historic view of the town center was taken from a point near the mining director’s residence. 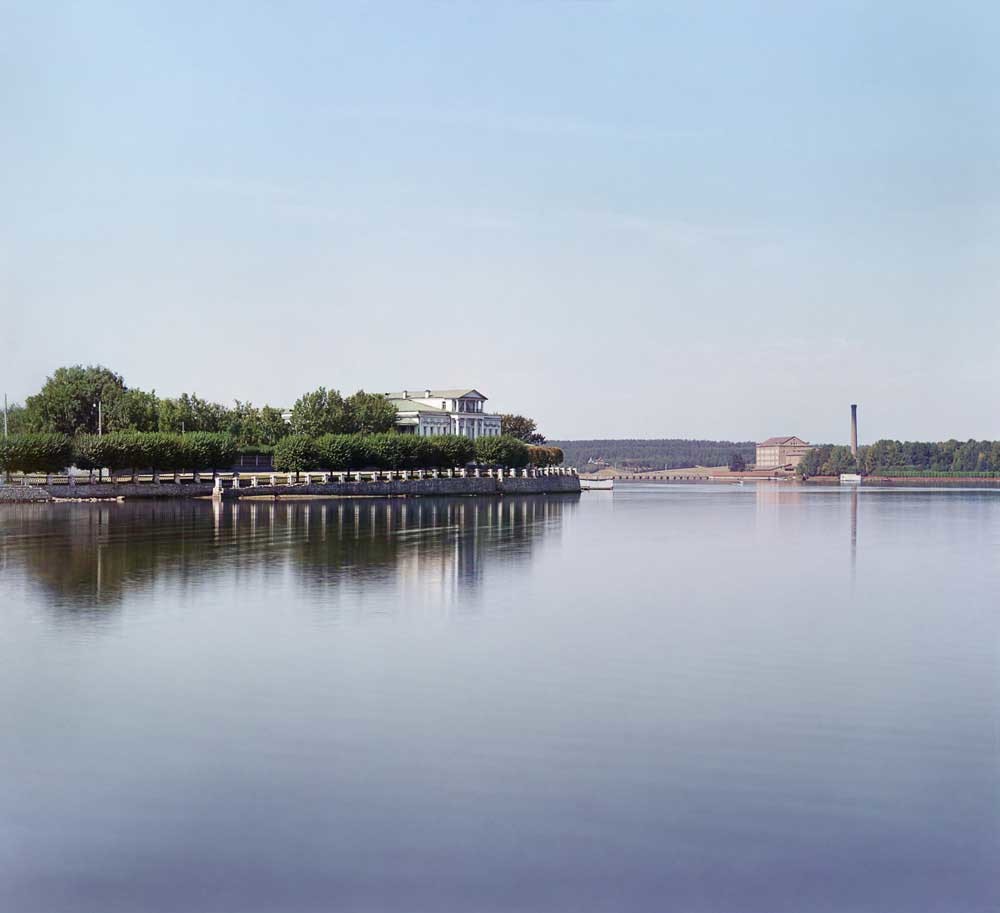 Prokudin-Gorsky then reversed vantage points and photographed the mansion itself, reflected in the pond. Completed in the early 1830s and attributed to Mikhail Malakhov, the imposing structure stood out among other porticoed houses built in the 1830s on Gymnasium Quay (the west bank) of City Pond. 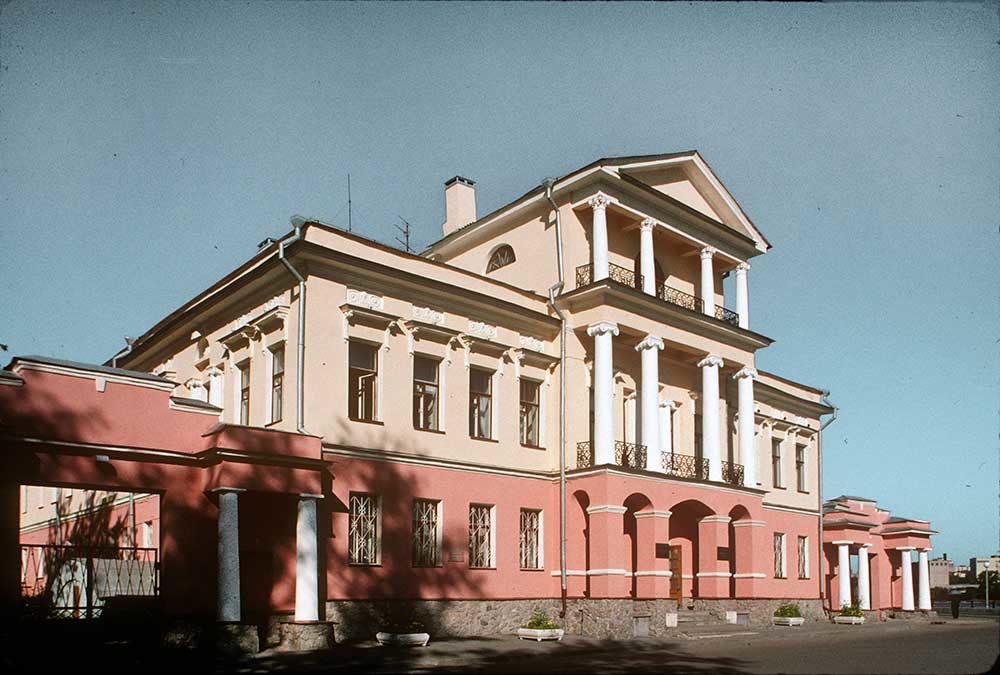 Indeed, the Mining Director’s residence is marked by two Ionic porticoes, the upper of which graces an attic that rises from the center of the main façade. These attics typically had a semicircular “thermal” window derived from Palladian (Italian Renaissance) design.

Prokudin-Gorsky then turned his camera in the direction of the pond toward the city’s main topographical feature, Ascension Hill. This rise in the cityscape was named after the Church of the Ascension, visible with its bell tower on the right in his photograph. 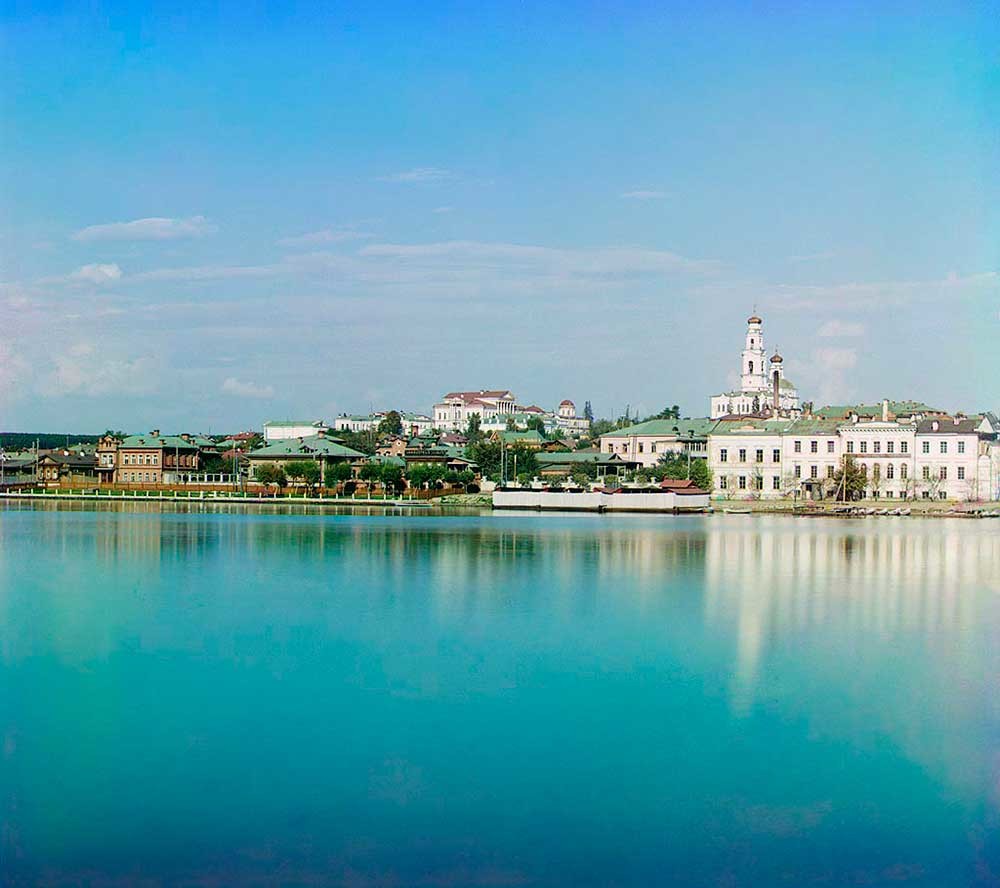 Not only is the Ascension Hill photograph stunning as a composition, but from a historical perspective, it is among the most significant in the Prokudin-Gorsky collection. The center of the photograph is dominated by the grand Rastorguev-Kharitonov Mansion, which he photographed separately. Slightly visible below is the house of the engineer Nicholas Ipatiev, notorious as the place where Nicholas II and his family were shot in July 1918.

Although my 2017 photographs show certain points remaining from Prokudin-Gorsky’s view, much has changed, including the loss of Ipatiev House, which was razed to the ground in 1977. That territory is now occupied by a memorial complex centered on the Church of All Saints on the Blood. In view of this dense history, the following article will be devoted exclusively to a photographic analysis of Ascension Hill 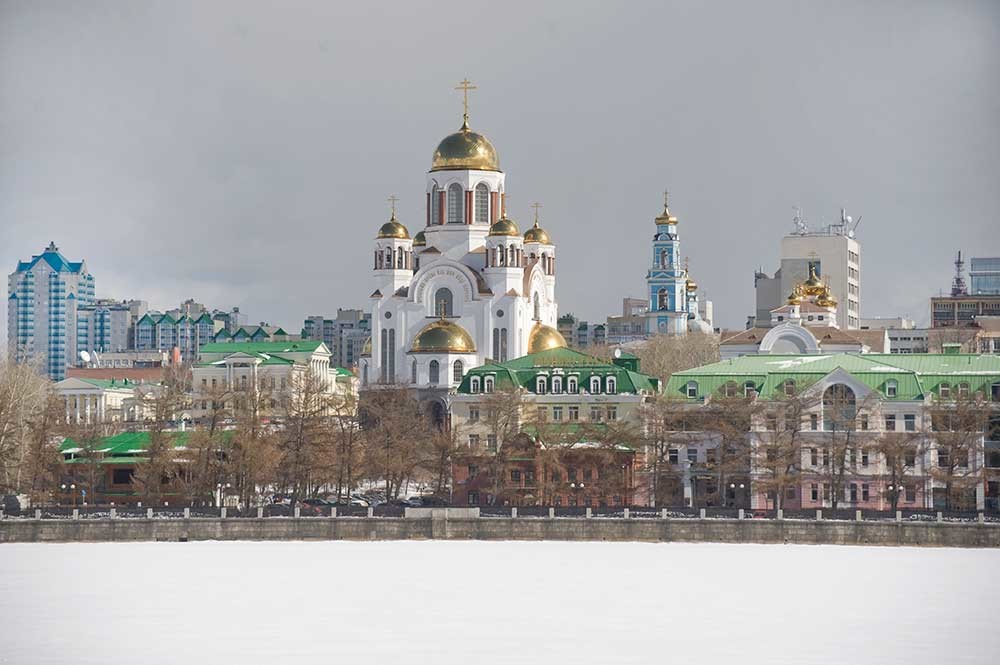 View across frozen City Pond toward Ascension Hill. From left: Rastorguev-Kharitonov Mansion, Church of All Saints on the Blood, bell tower & Church of Ascension. April 4, 2017.