Old Ladoga: The way of the Vikings 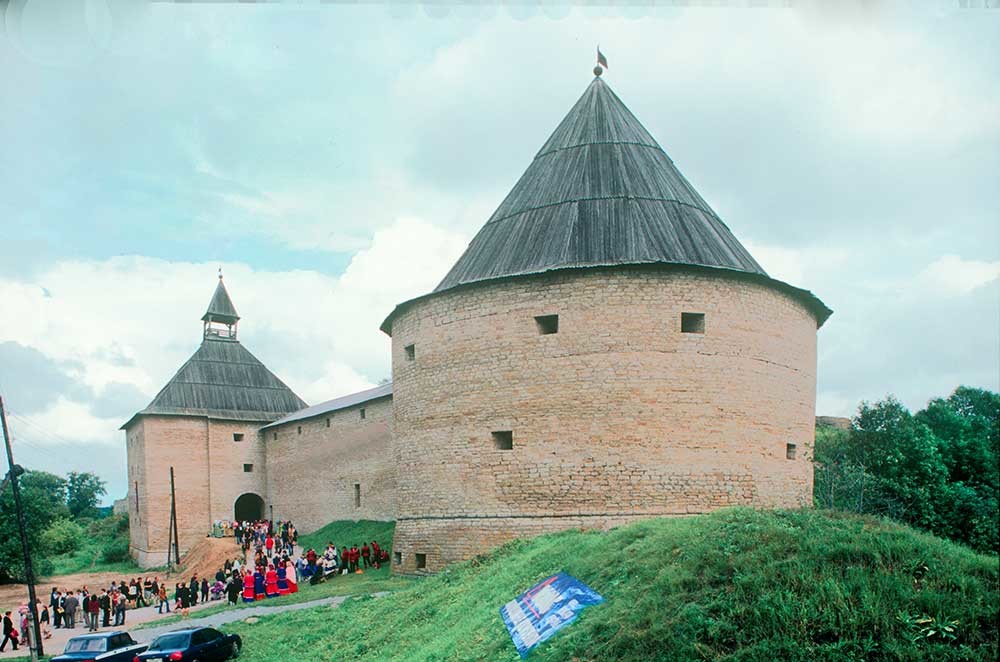 At the beginning of the 20th the Russian chemist and photographer Sergei Prokudin-Gorsky developed a remarkably versatile process for color photography. Inspired to use this method for recording the diversity of the Russian Empire, he undertook numerous journeys over a vast territory from 1903 to 1916.

In June and July of Prokudin-Gorsky received a commission from the Ministry of Transportation to photograph along the Waterway, a complex system initiated by Peter the Great to connect the Volga River basin with his new city of St. Petersburg, founded in 1703 and designated the capital of Russia in 1712.Utilizing Lakes Ladoga, Onega White Lake, the system led to the Sheksna River, which in turn emptied into the Volga northwest of Moscow 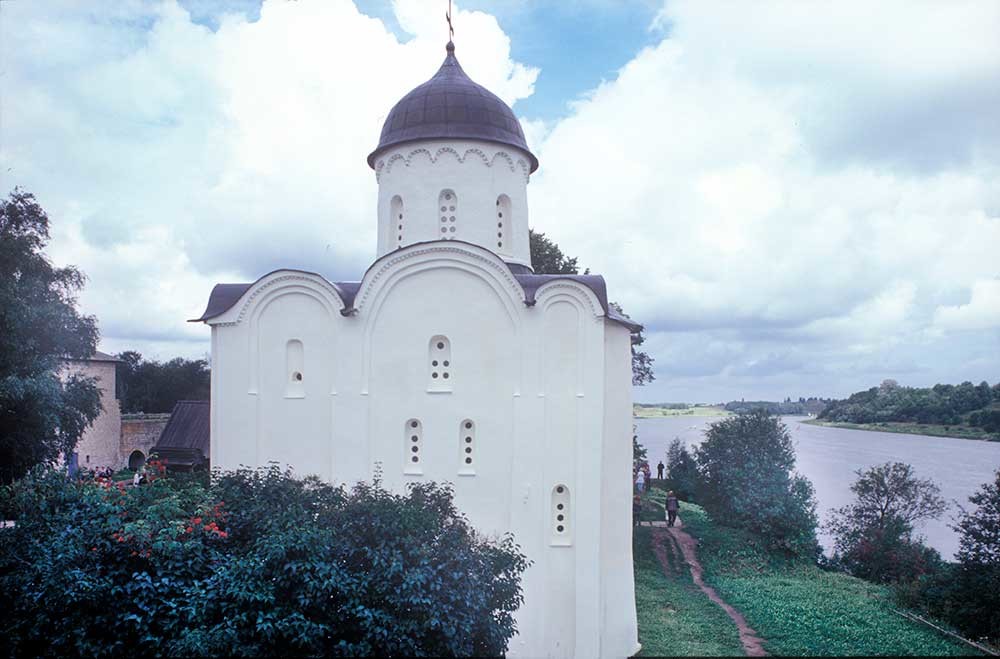 choice of the Waterway proved significant in the evolution of Prokudin-Gorsky’s documentary project, for the route connected some of the most ancient settlements in northwestern Russia. Among them was Old (Staraya) Ladoga,located on the small Ladozhka River (now known as the Elena River) near its confluence with the Volkhov River. The Volkhov, in its turn, empties Lake Ilmen at Veliky Novgorod - the main commercial center of northwestern Russian in the medieval period - and flows northward into Lake Ladoga 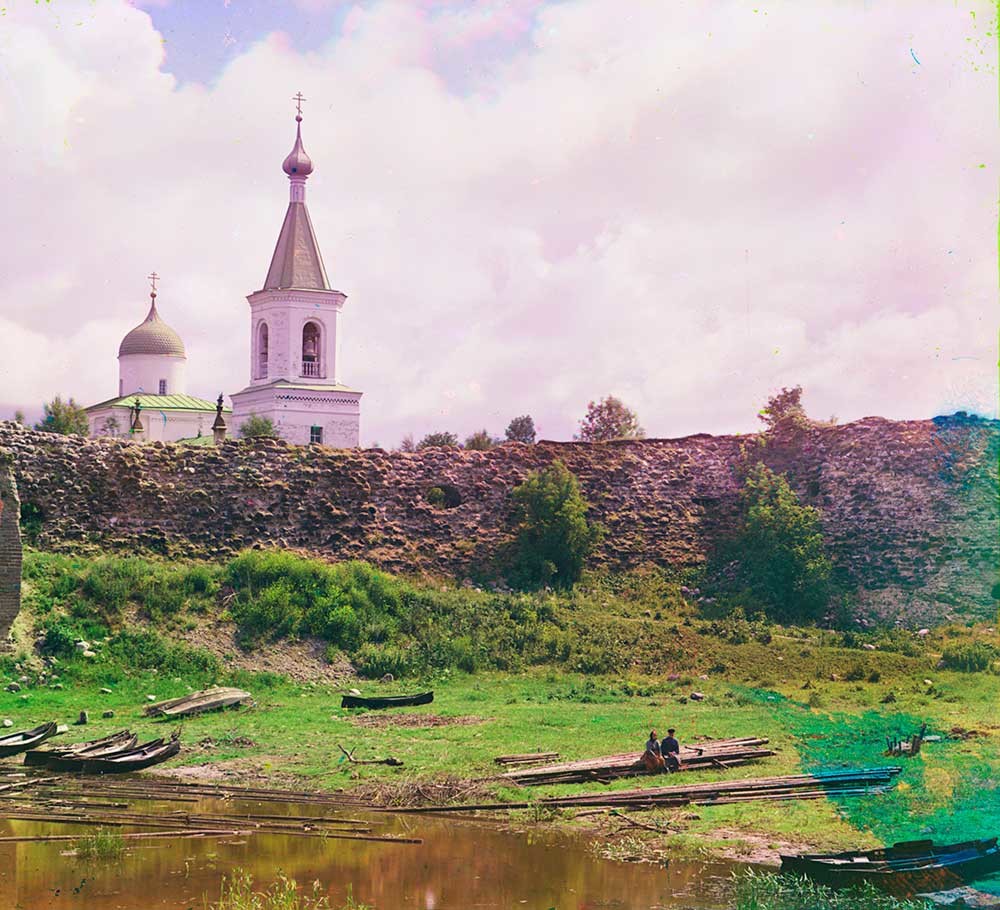 finds suggest that the Ladoga site, strategically located near the southeast edge of Lake Ladoga, was a trading center as early as the 7th century. Indeed, evidence suggests that the area had been settled since the Neolithic period. In the latter half of the 9th century, Ladoga was associated with the rise of the Riurikids, the first Russian dynasty, which lasted until 1598.

The early Ladoga fortress had earthen ramparts and has been dated to the 9th century. Medieval chronicles link it to the semi-legendary Varangian leader Riurik, who with his two brothers Sineus and Truvor assumed control over the vast territory of ancient Rus in the 860s. At this time the Ladoga area was settled by a mixture of Slavs and Finnic peoples, but there was also apparently a Norse presence 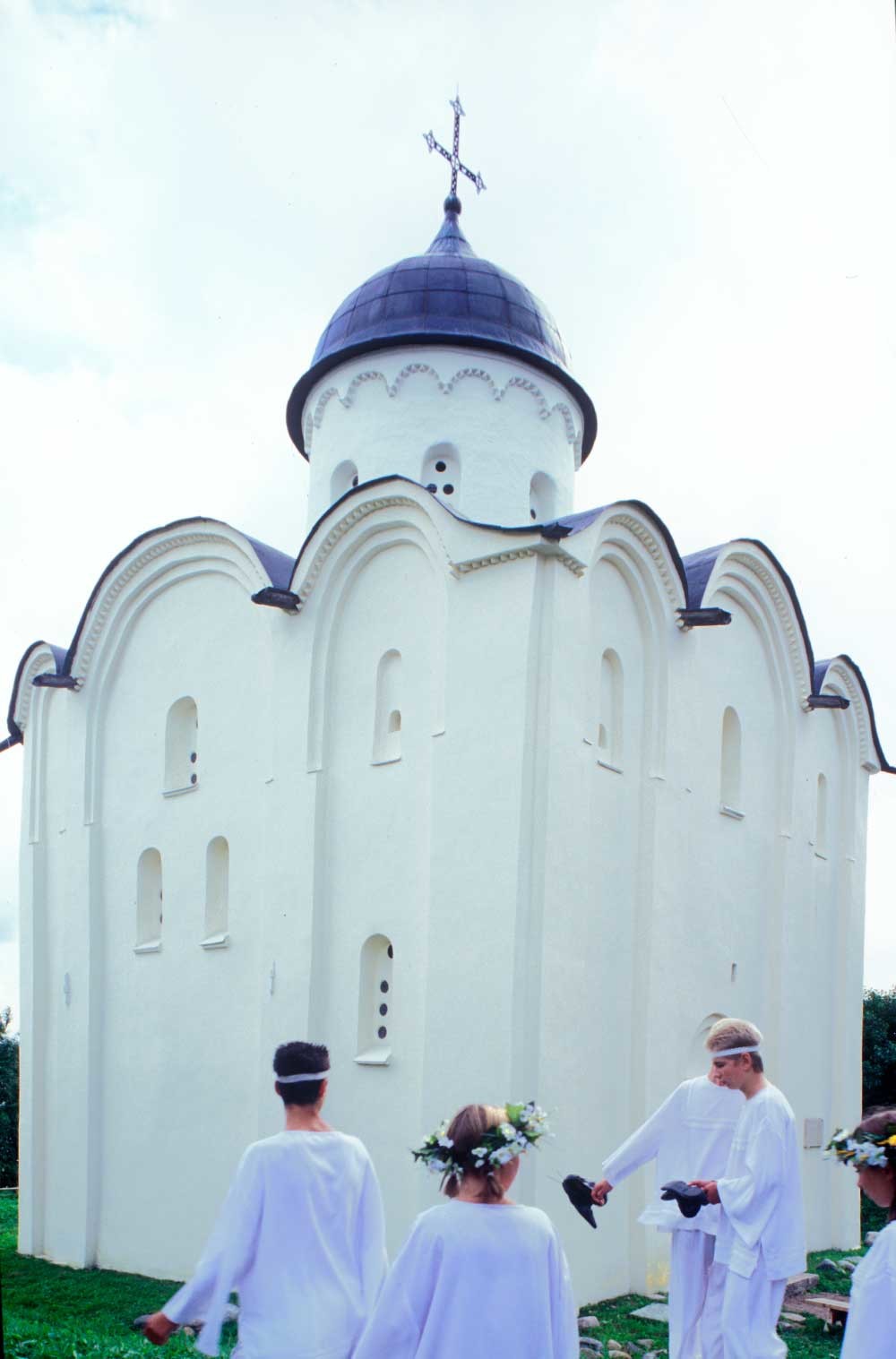 a time when trade through the was insecure, the route along the Dnieper River to the Black Sea - “from the Varangians to the Greeks”- allowed merchants in northern Europe access to Constantinople and the wealth of the Byzantine empire. The Varangians, identified in many accounts with the Vikings, served as imperial guards in Constantinople.

In the mid 860s the center of Riurik’s power moved to Veliky Novgorod, and after his death around 879, his kinsman, Prince Oleg, shifted the power center southward to Kiev on the Dnieper River. Nonetheless, chronicle accounts maintain Riurik’s early presence in Ladoga in 862. This seems logical in view of the important role of Lake Ladoga and the Volkhov River in the trading route “from the Varangians to the Greeks”. 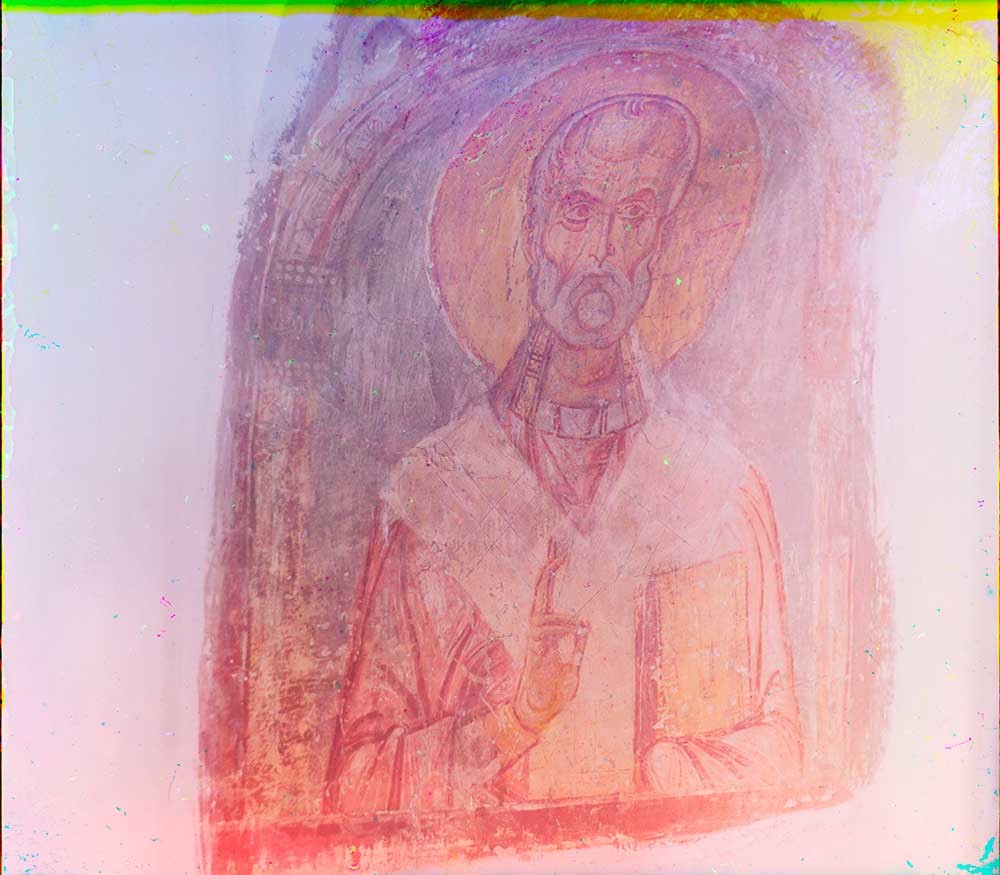 Despite the power shift to the south, the continued importance of Ladoga is reflected in the imposing stone walls that replaced the earthen fortress in the early 12th century. Begun by Novgorod Prince Mstislav the Great, this remarkable fortification guarded the area south of Lake Ladoga from Swedish .

The oldest shrine photographed by Prokudin-Gorsky in Ladoga was the Church of St. George, seen in his photograph over a section of the ruined fortress walls. There is no evidence that he photographed the church more closely. The constricted space inside the fortress and the ruined state of the fortress walls apparently excluded the distance that his limited camera lens would have needed to encompass the entire structure. I had the advantage of a reconstructed fortress wall and was able to photograph it with different lenses during the town festival in August 2003 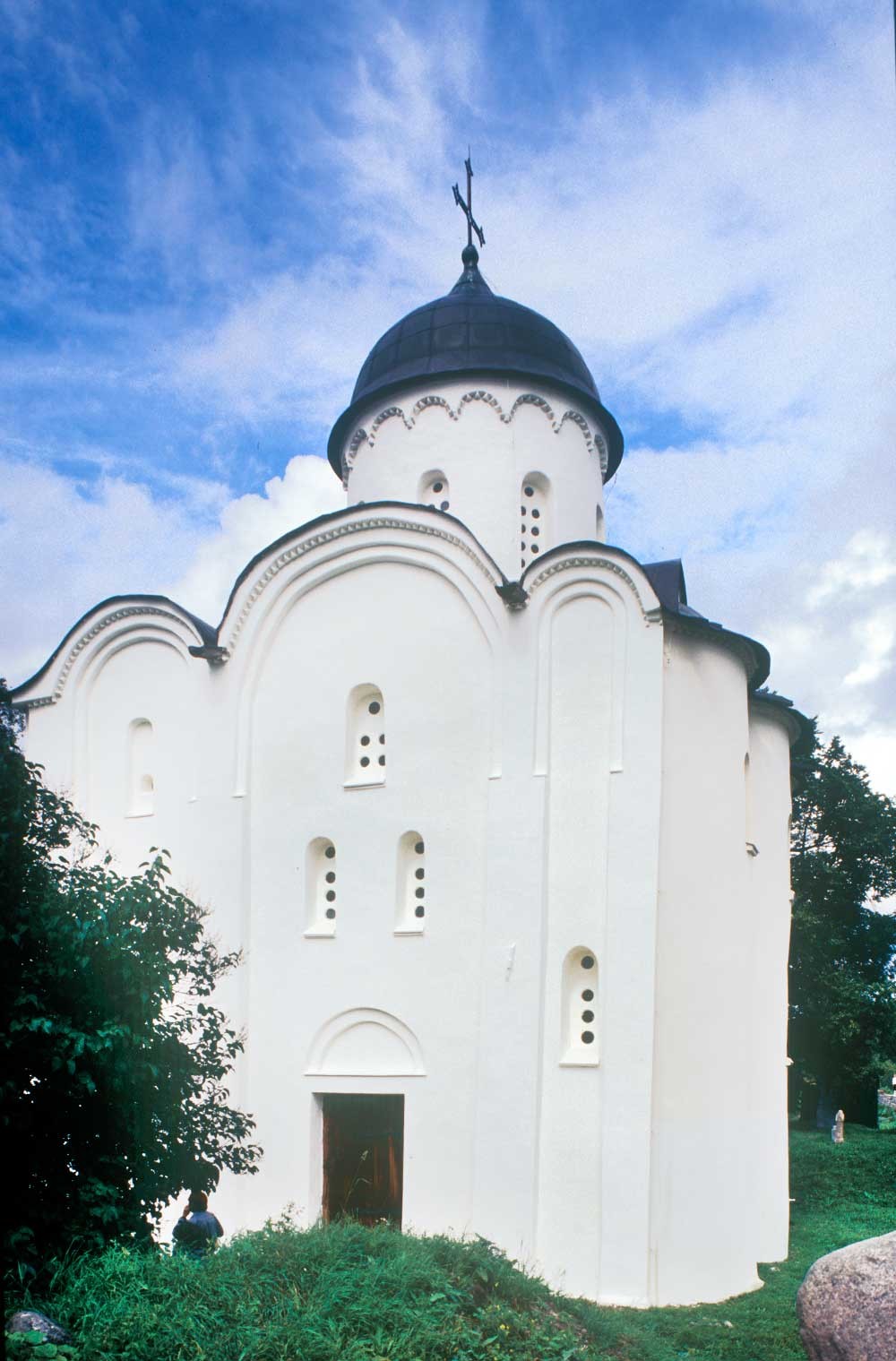 about the construction dates of the St. George Church is elusive, and it might have been built in phases, beginning around 1165, Nonetheless, all versions agree that construction of the church dates to the second half of the 12th century, a time when Slavs were fighting with Swedes for control of this strategic territory. The dedication to the militant figure of St. George is associated with Ladoga’s role in a victorious Novgorodian repulse of an invading Swedish force during a battle on the nearby Voronezhka River in May 1164.

The initiator of the Church of St. George is thought to be Bishop Nifont, a prelate of Greek origins who was responsible for the exquisite Cathedral of the Transfiguration of the Savior at the Transfiguration Monastery in Pskov, which was known as Novgorod’s “younger brother”. 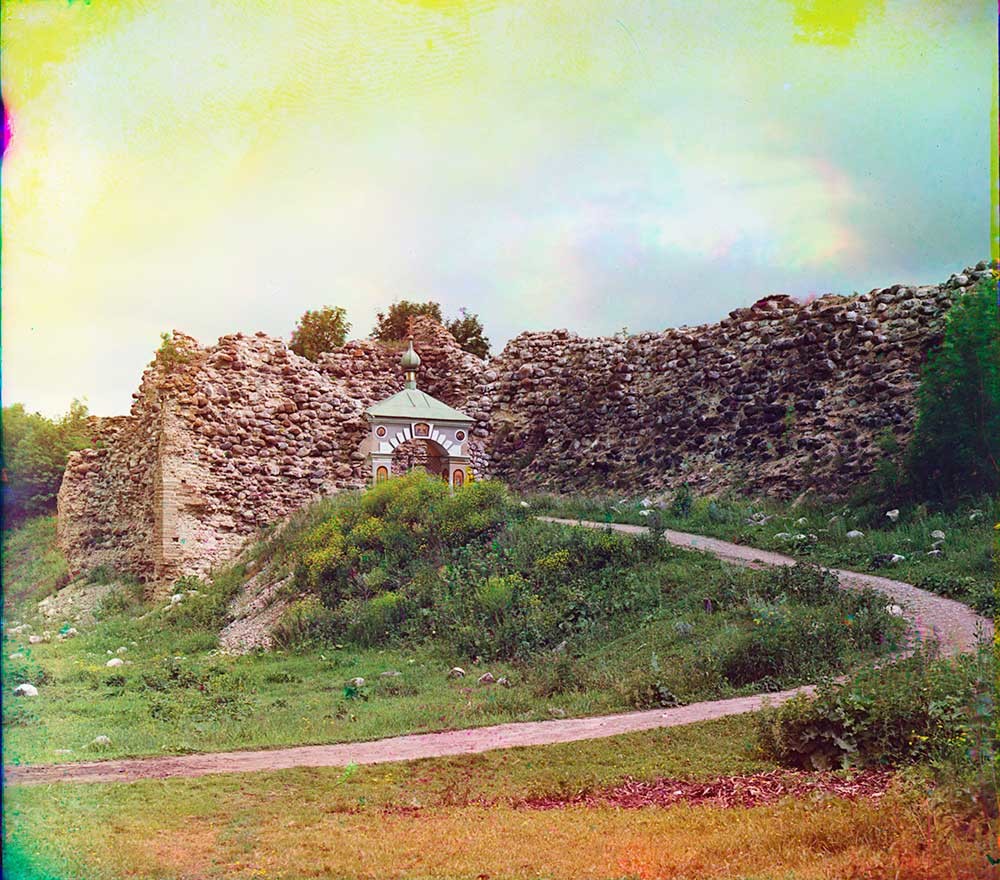 The St. George Church conforms to a basic form common in pre-Mongol Novgorodian Rus: a simple whitewashed structure of thin brick, with each façade divided into three bays. An apse, containing the altar, extended from the east side, and the structure was crowned by a single dome on a or cylinder. The interior had four piers that supported the ceiling and dome.

The ancient church was restored in various phases during the 20th century, including the 1920s and 1950s. During that period the 19th-century bell tower visible in Prokudin-Gorsky’s photograph was demolished as anachronistic 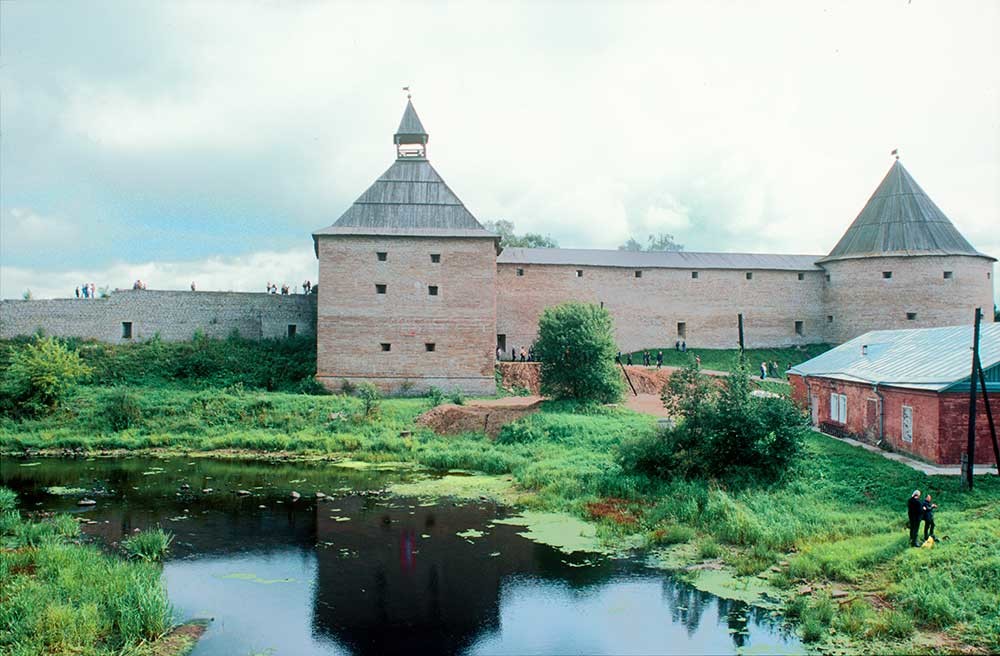 the Prokudin-Gorsky was able to photograph fragments of late 12th-century frescoes, most of which had vanished over the centuries, particularly during a renovation of the church in the 1680s. A small fraction of the originals uncovered and cleaned at the beginning of the 20th century, a few years before the photographer’s visit. His masterful eye recognized the frescoes’ importance and the need to record them despite the difficult light of the small interior.

In subsequent centuries Ladoga remained a significant Russian outpost in the northwest. Its walls were expanded with massive towers by Grand Prince Ivan the Great of Moscow at the end of the 15th century. Captured by the Swedish commander Jacob De la Gardie in 1610 during the Time of Troubles, Ladoga was retaken by Ivan Saltykov the following but changed hands again. In a much-reduced state, it remained Russian territory with the signing in 1617 of the Stolobovo Treaty, which ended the Russ-Swedish War of 1610-1617 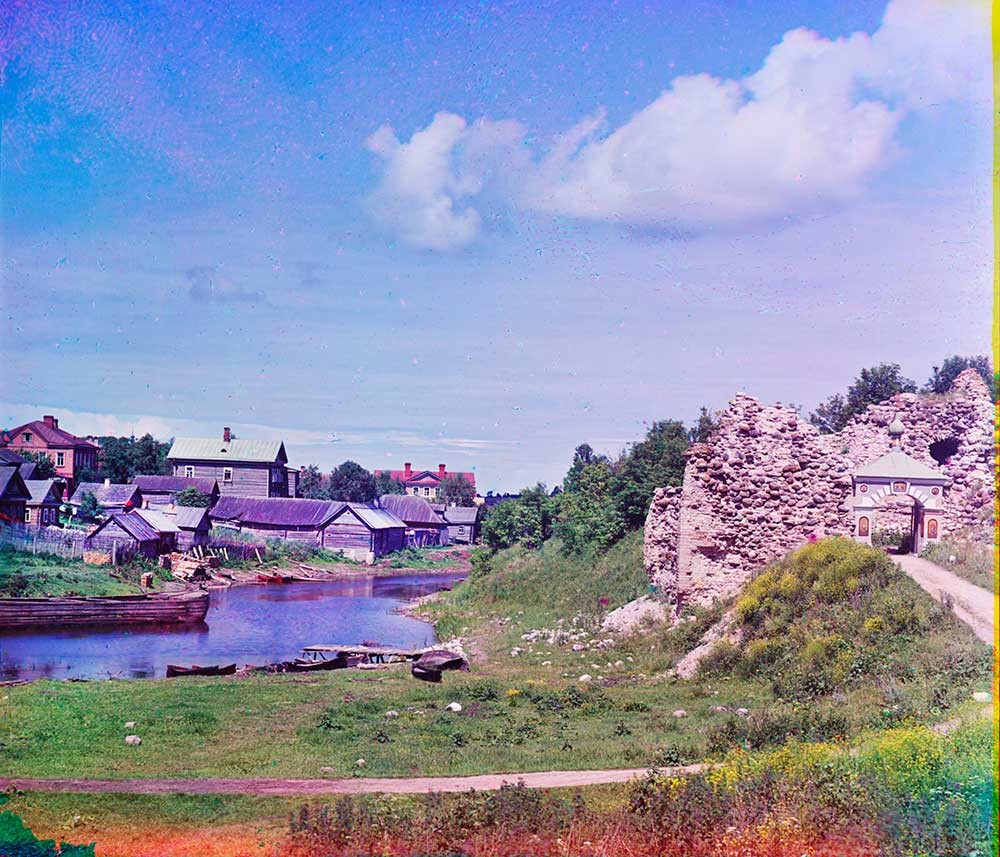 the beginning of the 18th century, Peter the Great founded St. Petersburg in 1703 and greatly expanded Russian territory at Sweden’s expense during the Great Northern War. As part of his plan to expand Russian trade and communications in support of his new city, Peter founded the town of Novaya (New) Ladoga in 1704 at the point where the Volkhov River enters Lake Ladoga. Consequently, the ancient settlement was renamed Staraya (Old) Ladoga, a name that it bears to the present.

By the time of Prokudin-Gorsky’s visit, the massive stone walls had fallen into a state of picturesque disrepair. He took four photographs of the fortress remains, primarily from the Ladozhka River 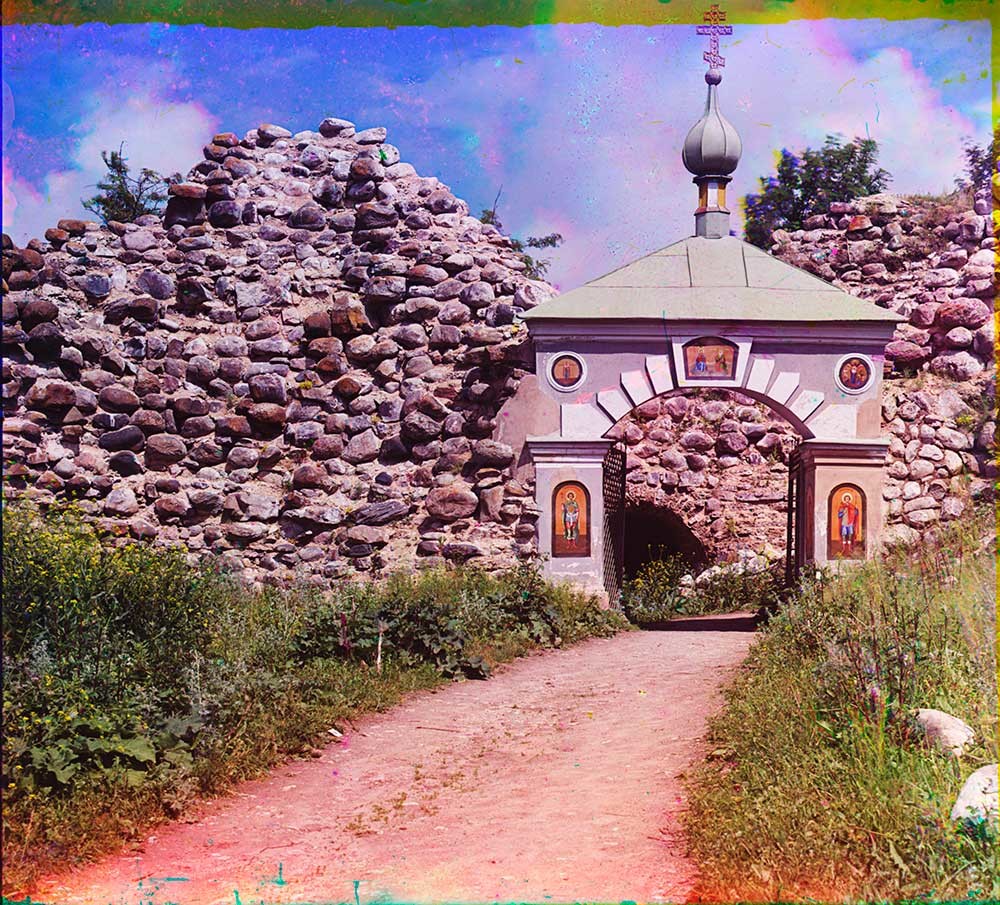 Prolonged restoration work on the fortress walls began in 1960, and by 1976 portions of the walls and two large towers—the Vorotnaya and the Clement - had been rebuilt. impetus was provided by the founding of the Staraya Ladoga Museum in 1971. My photographs show the fortress wall and towers as they looked in 2003. The restoration process continues to the present.

Even in its abandoned state (or perhaps especially in that state), Staraya Ladoga has inspired generations of artists, including Valentin Serov, Boris Kustodiev and, above all, Nicholas Roerich, whose paintings colorfully recreated visions of Viking boats in the area. On a windswept summer day, the view from the Old Ladoga fortress down the Volkhov River continues to summon such reveries 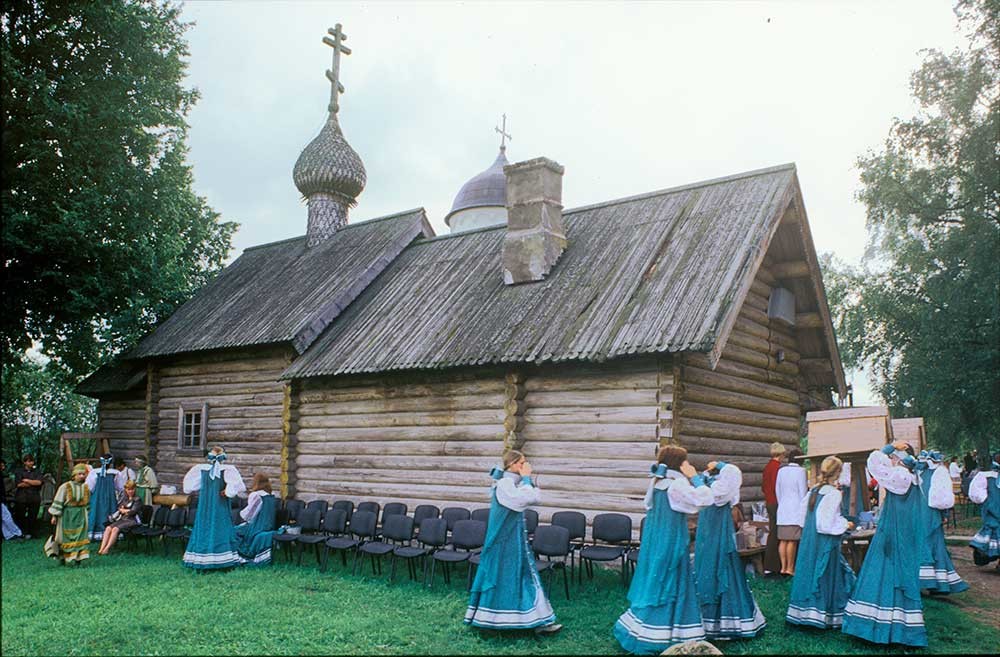