Crowned with ceramics: The Church of the Savior in Belozersk

At the beginning of the 20th century, the Russian chemist and photographer Sergei Prokudin-Gorsky developed a remarkably versatile process for color photography. Inspired to use this method for recording the diversity of the Russian Empire, he undertook numerous journeys over vast distances from 1903 to 1916. 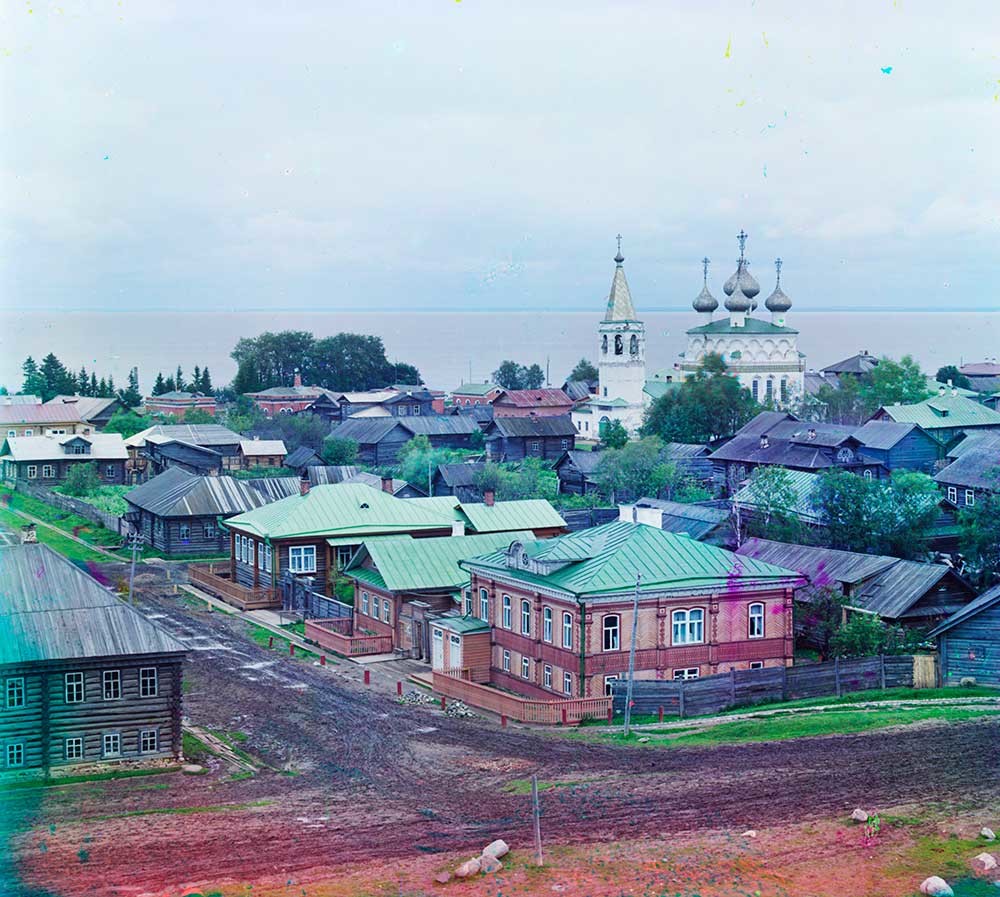 In June and July 1909,Prokudin-Gorsky received a commission from the Ministry of Transportation to photograph along the Waterway, a canal system originated by Peter the Great to connect the Volga River basin with St. Petersburg, founded in 1703 and designated the capital of Russia in 1712.The route chosen for the waterway connected some of the most ancient sites in northwestern Russia. 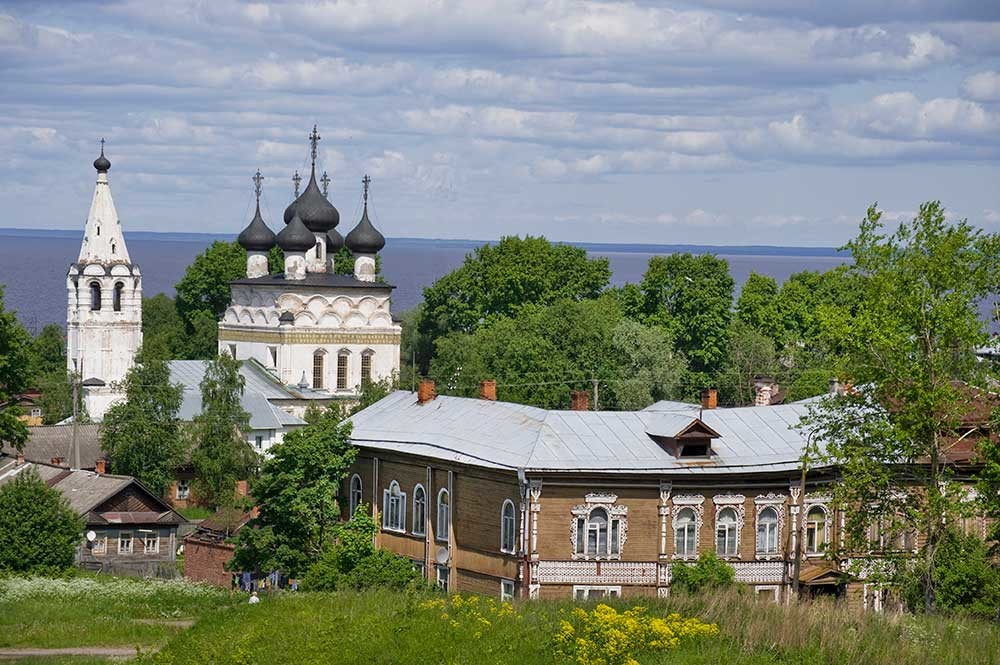 A major point in Prokudin-Gorsky’s journey along the waterway was the Vologda Region town of Belozersk (current population around 10,000). The town is among the oldest known settlements in northwestern Russia. “Beloozero” is mentioned in the Primary Chronicle under the year 862 as one of the five towns granted to the Varangian (or Viking) brothers Riurik, Sineus and , invited, according to the chronicle, to rule over the eastern Slavs in what was known as Rus. 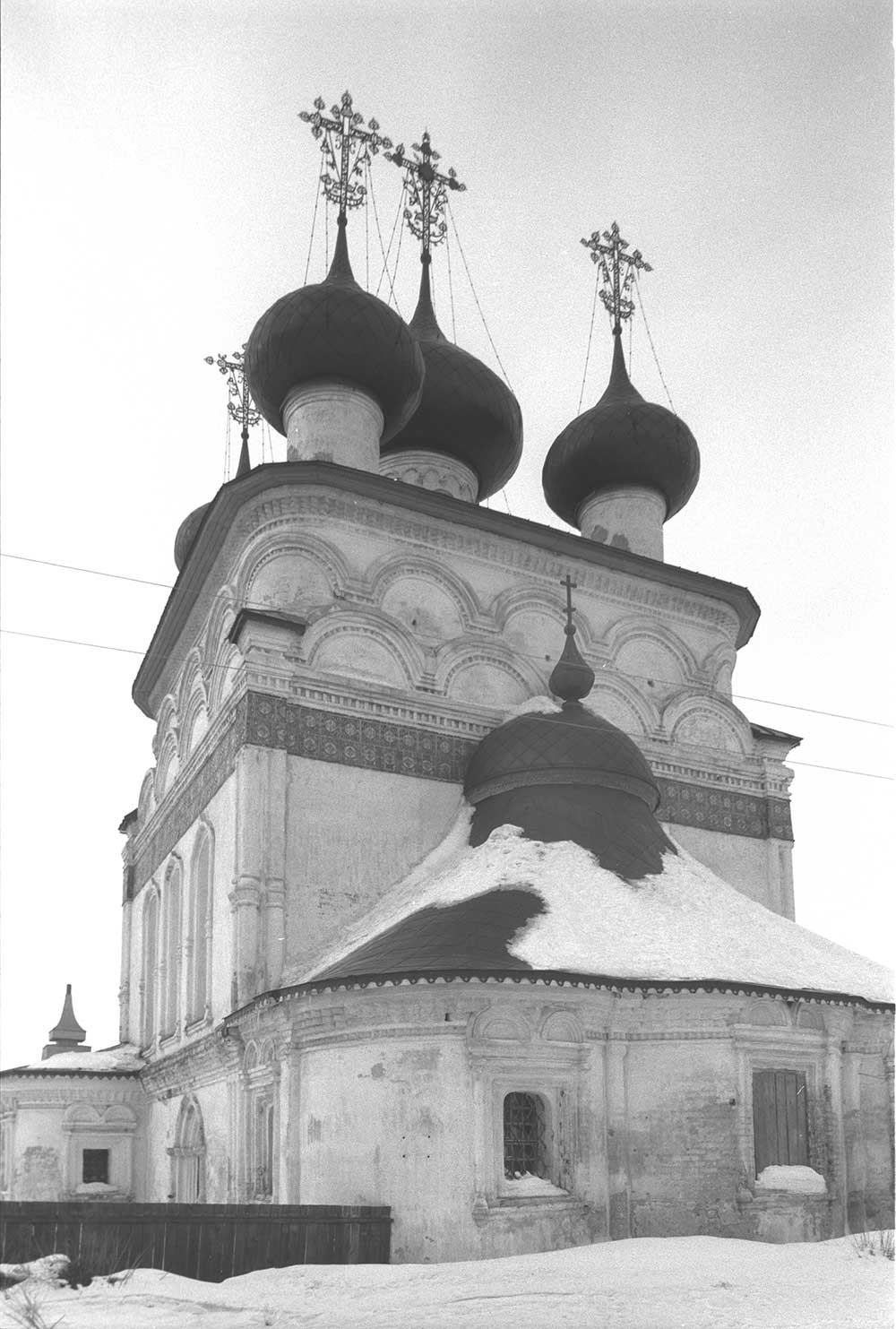 Church of the Most Merciful Savior, southeast view. March 3, 1998.

The early Beloozero was resettled until it occupied its current place in the late 14th century. Whatever the details of its origins and early location, the town’s name indicates the connection with White Lake (Beloe Ozero). 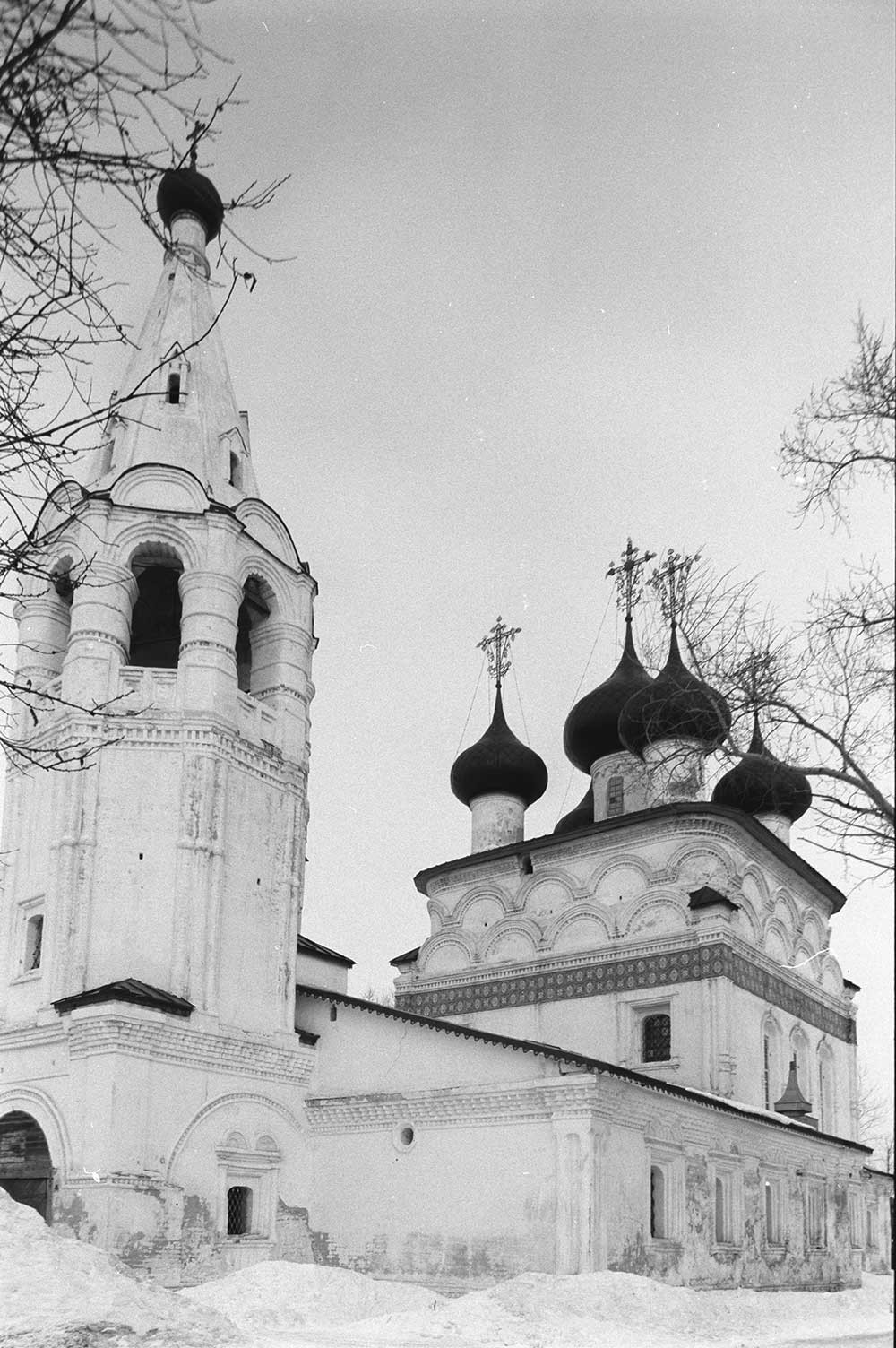 Church of the Most Merciful Savior, southwest view with bell tower. March 3, 1998.

Although smaller than Lakes Ladoga and Onega, White Lake is a pivotal link between those two lakes and the Russian heartland. On the southeast end, White Lake drains into the Sheksna, an important tributary of the Volga and now the route of summer cruise boats between Moscow and St. Petersburg.

As Moscow’s power increased in the 15th century, Beloozersk gained importance as a bulwark for Muscovy in the northwest. Ivan III (the Great) understood the significance of this location, and in 1487 he constructed a large fortress, or kremlin, whose earthen ramparts still stand. 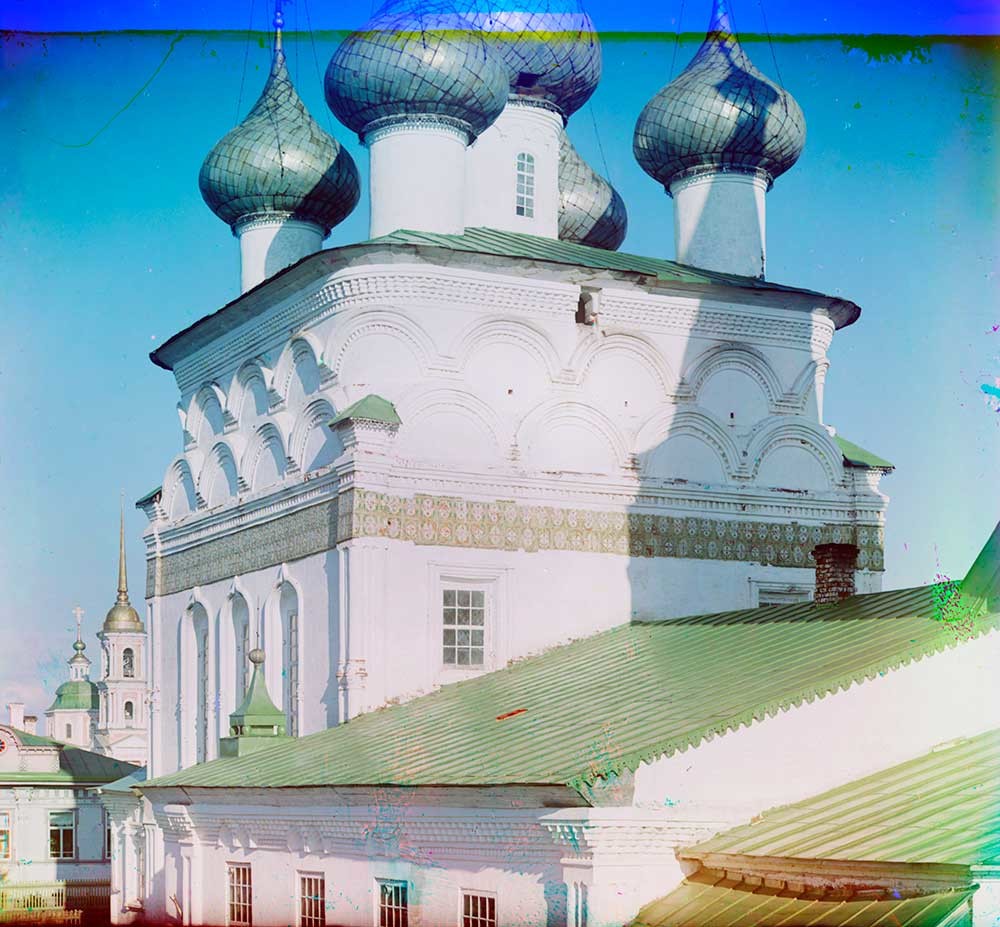 Church of the Most Merciful Savior, southwest view. Summer 1909.

The town prospered during the middle of the 16th century, particularly as a source of iron goods and fish. Yet Beloozersk witnessed the disruptions of the latter part of the reign of Ivan the when the town was included in his personal domain (oprichnina) and served as a place of exile. The Time of Troubles (a dynastic crisis following the death of Tsar Boris Godunov in 1605) brought devastation, with the sack of Belozersk by a marauding force in 1612. 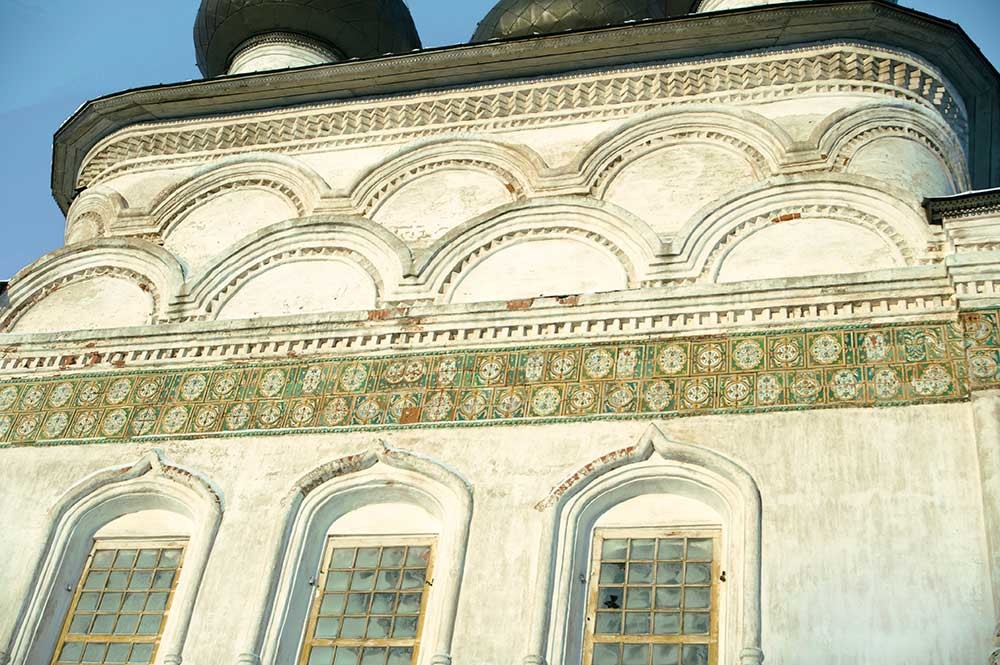 Church of the Most Merciful Savior. South facade with ceramic tile band. December 29, 2010.

Belozersk’s location on major water transportation routes proved advantageous as trade revived in the late 17th century. With the founding of St. Petersburg in 1703, Belozersk found itself in a pivotal position between the Volga River Basin and Lakes Onega and Ladoga leading via the Neva River to the new imperial capital. 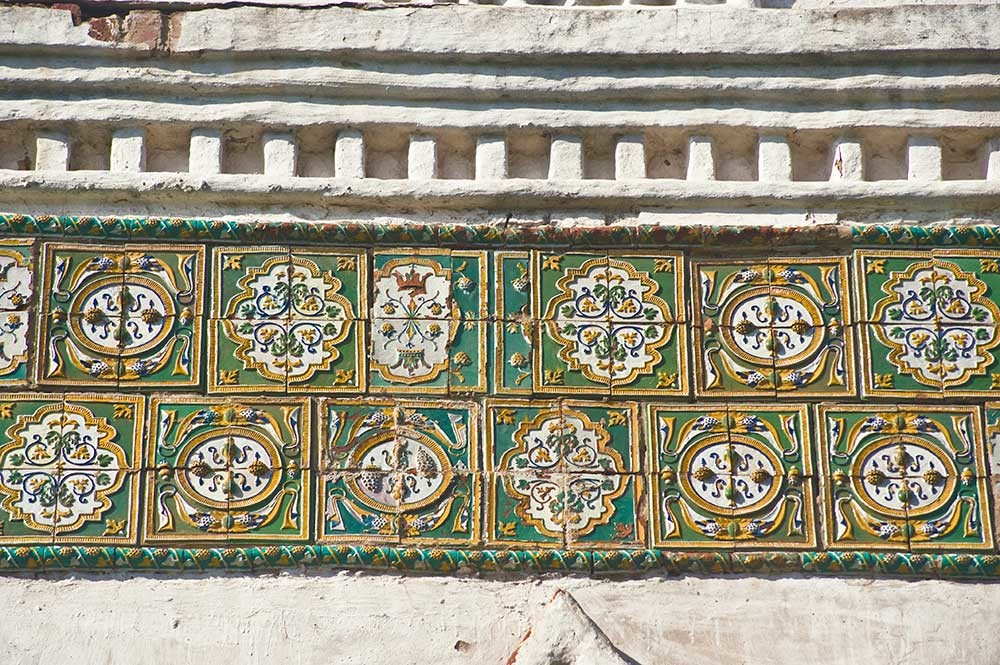 Church of the Most Merciful Savior. South facade with ceramic tile detail. August 8, 2009.

the 18th century, this renewed was reflected in the construction of numerous parish churches, several of which were destroyed or deformed during the Soviet period. Among these churches, the most beautiful is the Church of the Merciful Savior (Vsemilostivyi Spas), dedicated to an icon of the Savior that was revered for its protection of Russia. 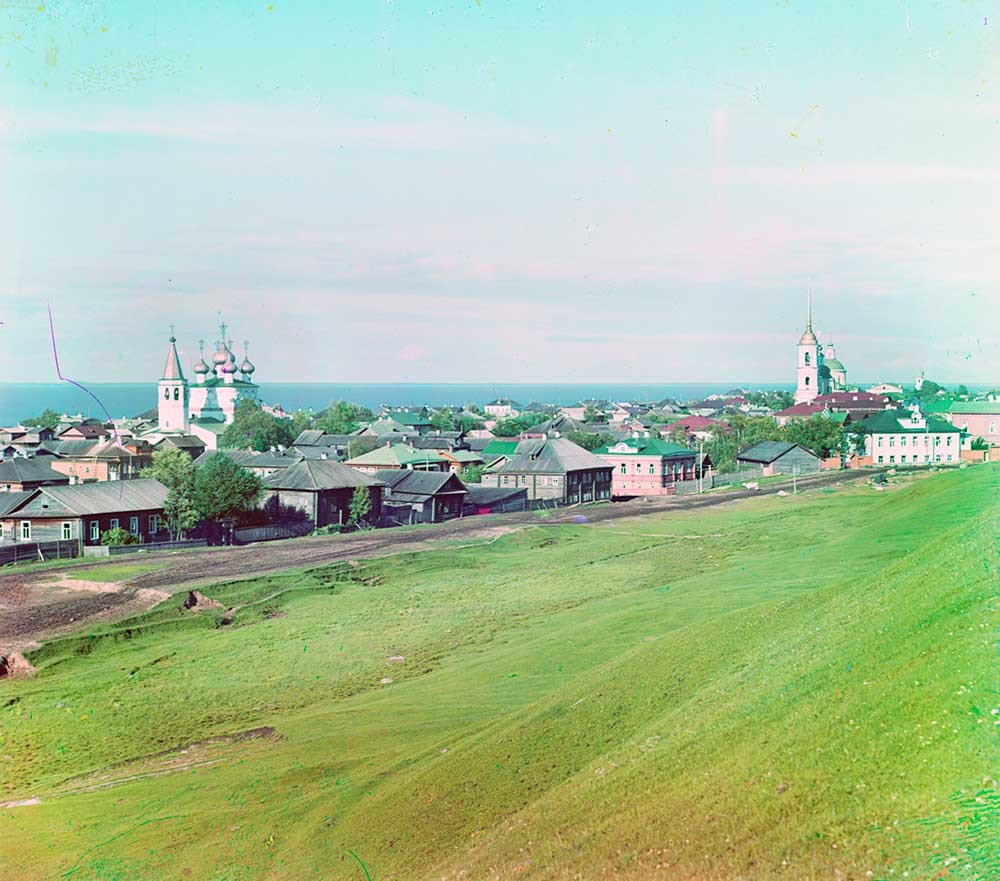 View east from kremlin rampart with Church of the Most Merciful Savior. Right: Church of the Nativity of Christ (demolished in 1930s). Summer 1909.

Located near the lakeshore and clearly visible from the northeast ramparts of the Kremlin, the Church of the Merciful Savior — also known as the Savior Church on the Canal — was originally built in 1716-23 and reconstructed two years after the 1753 Belozersk fire. Its style shows similarities with major church architecture at the turn of the 18th century, such as the Epiphany Church (1683-93) near the Transfiguration Monastery in Yaroslavl, although there were important differences. 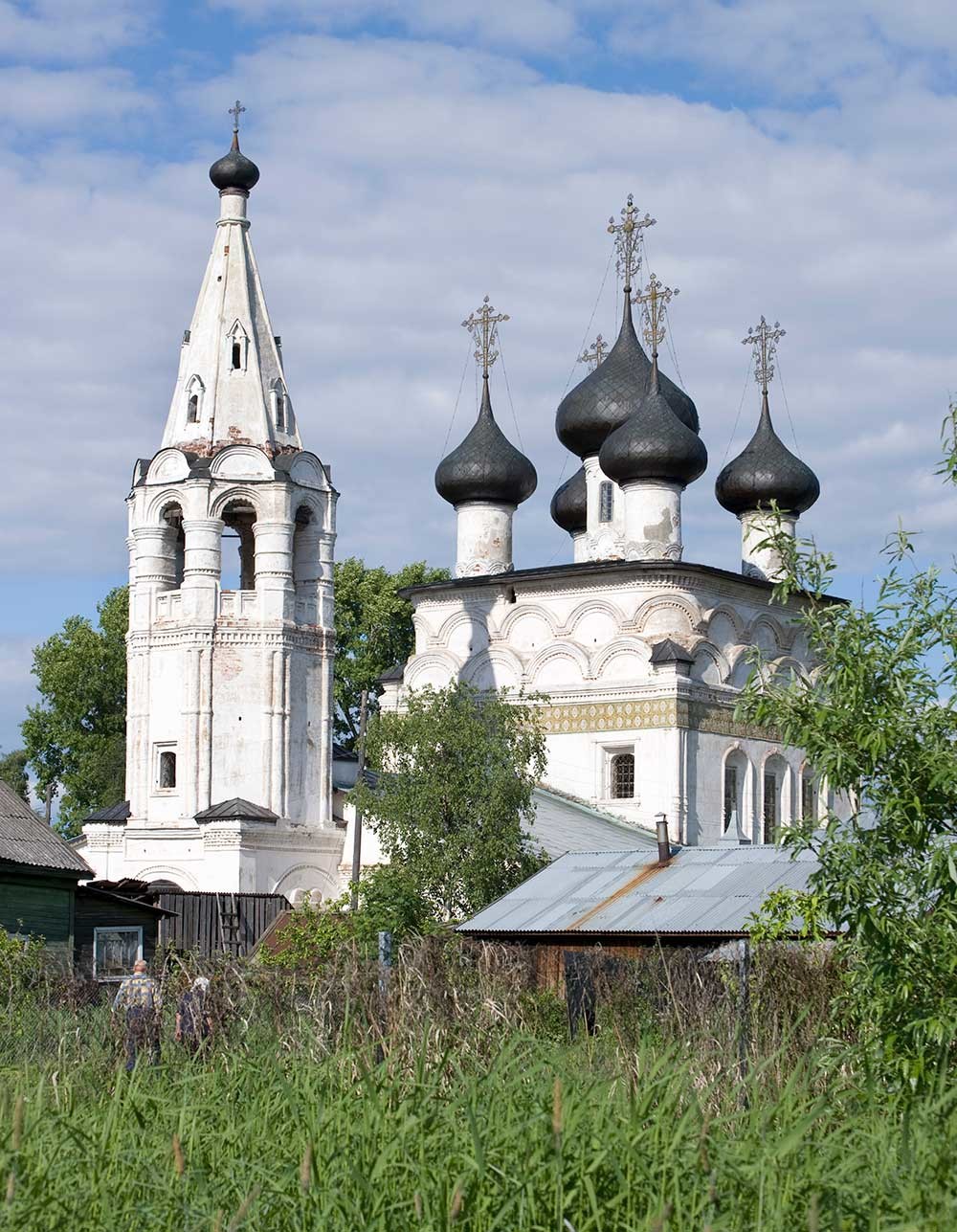 Church of the Most Merciful Savior, southwest view. June 9, 2010.

Many churches in Yaroslavl during the late 17th century were built of brick, structured so that the mastery of Yaroslavl’s brick masons was clearly visible. In contrast, the brick walls of the Savior Church were clad in whitewashed stucco.This white surface displays with brilliant clarity the primary decorative feature of the Savior Church: the horizontal bands of ceramic tiles in green, yellow and whitethat encompass the upper part of the main structure.

Ceramic decorative art in Russia underwent a revival in the 17th century. The extensive use of ornamental tiles not only proclaimed the wealth and beauty of the Orthodox but could be interpreted as a preview of the beauty of paradise. Although Moscow, Yaroslavl Novgorod were the main centers of this art form, the Belozersk Savior Church demonstrates a unique application of it — a ceramic “necklace” around the upper structure. 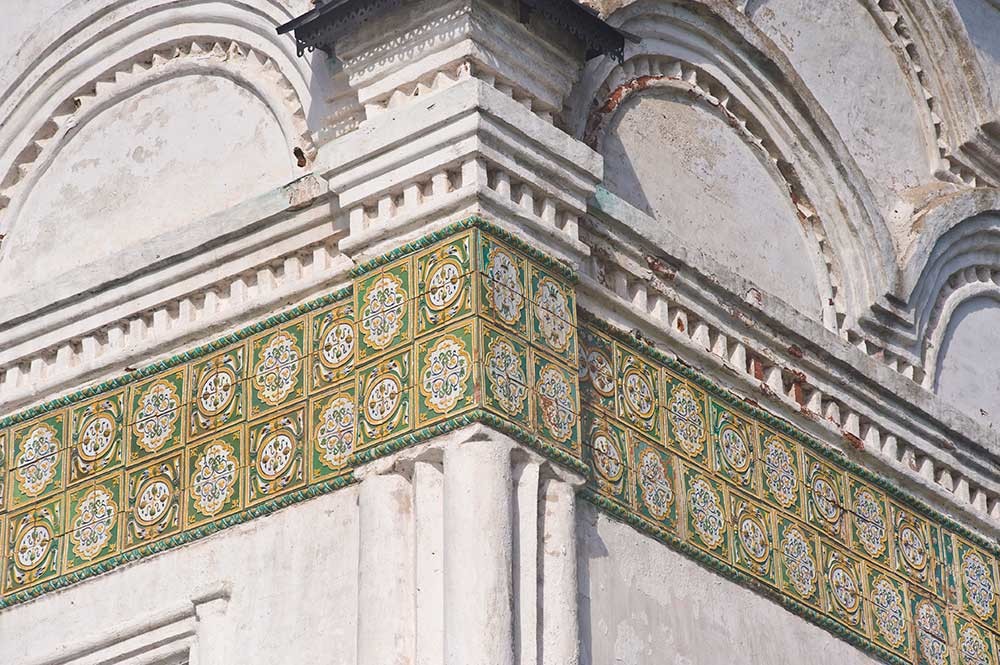 These ceramic rows above the main windows provide a transition to the brick bands of an ornamental cornice that supports stacked decorative gables () beneath the roof. This distinctive resolution leads to a second brick cornice, above which is the roof with its five drums and onion domes. The cupolas culminate in elaborate iron crosses made in 1783.

The structural components of the Savior Church are united in a harmony of proportions. The bell tower — connected to the west side by a one-story vestibule — provides a graceful counterpoint to the main part of the church. On the east side, the extended low apse containing the central altar merges with the church’s east wall via a distinctive sloping roof crowned with a cupola.

During the Soviet era, the church interior was ransacked and converted to a warehouse. Only traces of its baroque decoration remain on the walls. Its altars included the Merciful Savior and four secondary altars dedicated to the Purification of the Virgin, St. Andrew, St. Dmitry of Salonika and St. Catherine. 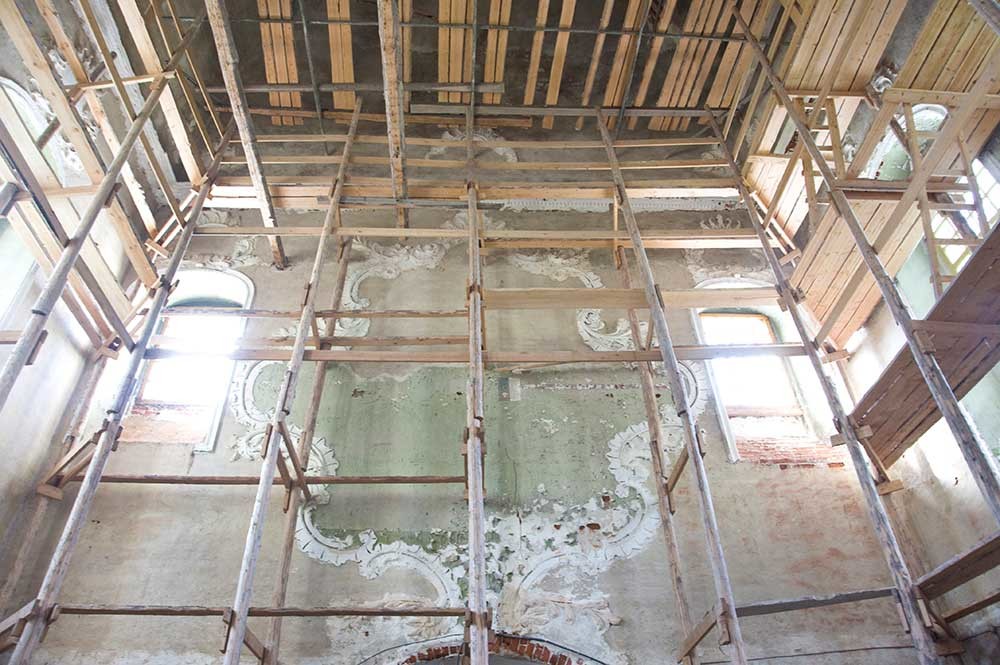 Restoration work begun in the 1980s did not address the danger of seepage into the lower walls, Fortunately, renewed restoration efforts in advance of the town’s 1150th anniversary in 2012 stabilized the situation. Although other monuments in Belozersk are in urgent need of preservation, priority was correctly given to the Savior Church in view of its extraordinary aesthetic value and position as one of the most visible landmarks in ancient Belozersk.