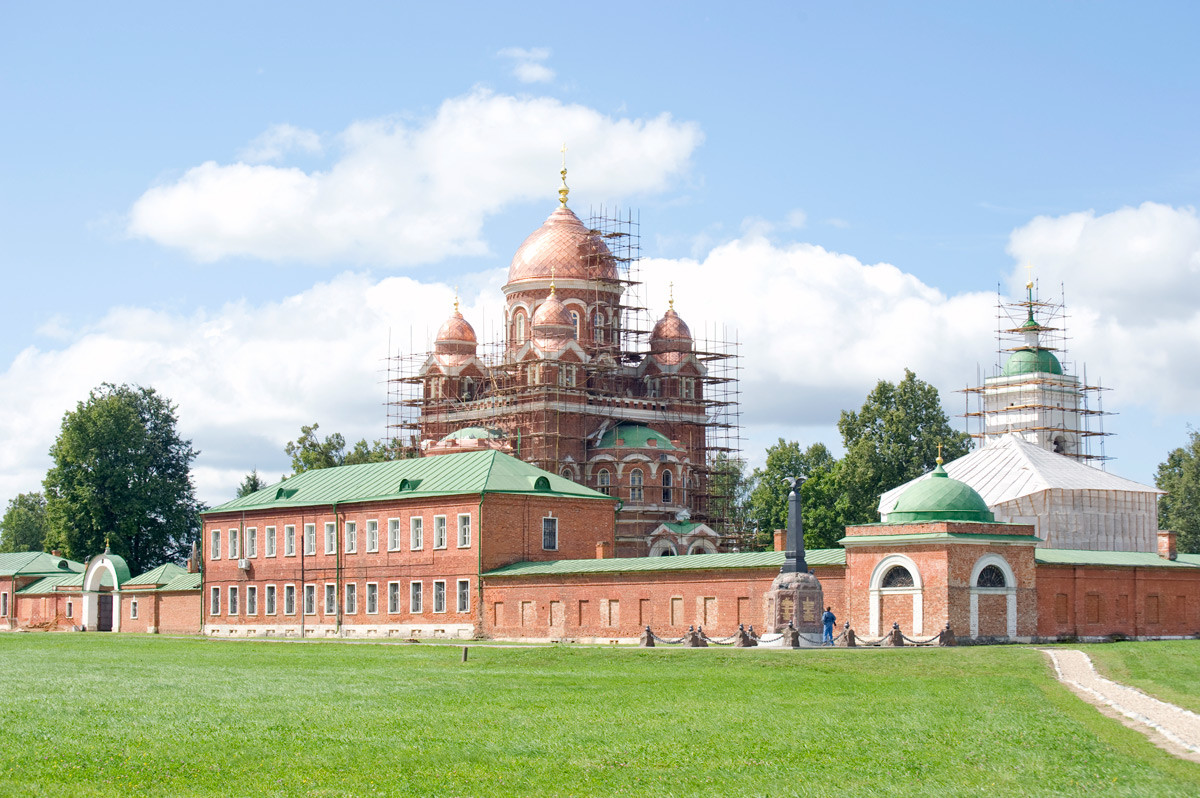 At the beginning of the 20th century, the Russian chemist and photographer Sergei Prokudin-Gorsky developed a complex process for vivid, detailed color photography. His vision of photography as a form of education and enlightenment was demonstrated with special clarity through his photographs of architectural monuments in historic sites throughout the Russian heartland.

One such place is the village of Borodino, which Prokudin-Gorsky visited in the summer of 1911 as part of a project to document sites connected with the centennial of the Napoleonic invasion of Russia. At Borodino, he photographed sites associated with the titanic clash between the Russians and the French that occurred on Sept. 7, 1812. My photographs of the area were taken in late August 2012, almost exactly two centuries after the battle. 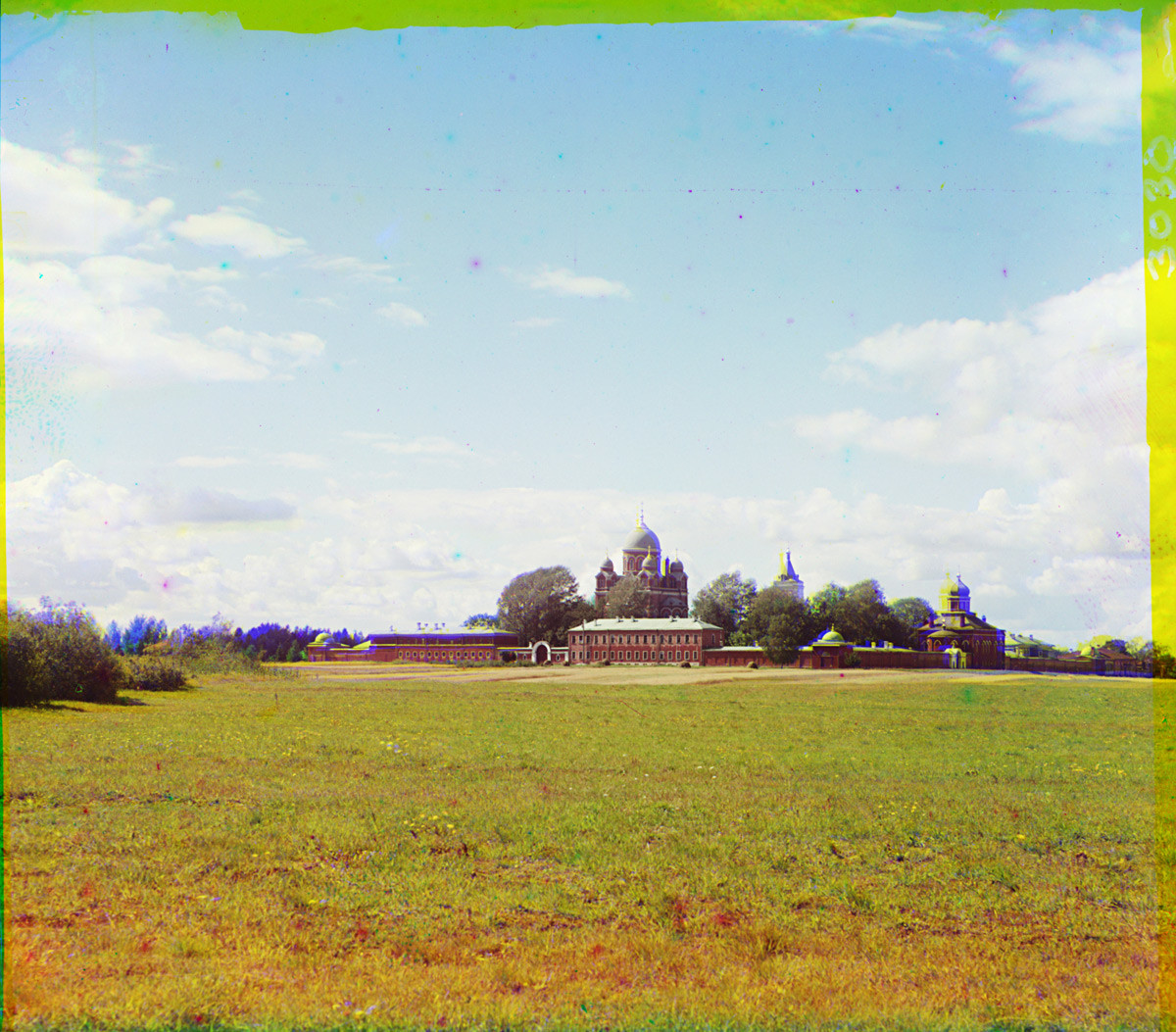 Borodino is perhaps best known from the incomparable, epic description of the battle in Leo Tolstoy’s War and Peace. Known to the French as the Battle of Moscow, the Borodino struggle involved over a quarter of a million combatants. It is thought to have been the bloodiest battle in all the Napoleonic wars, with perhaps 75,000 casualties (precise figures are difficult to determine).

The French won a tactical victory, yet they failed to destroy Russian forces under the command of Prince Mikhail Kutuzov. Although the retreat of the Russian army after Borodino resulted in the destruction of much of Moscow, the occupation of the ancient capital led not to Russian defeat, but to the disintegration of the French Grand Armee. 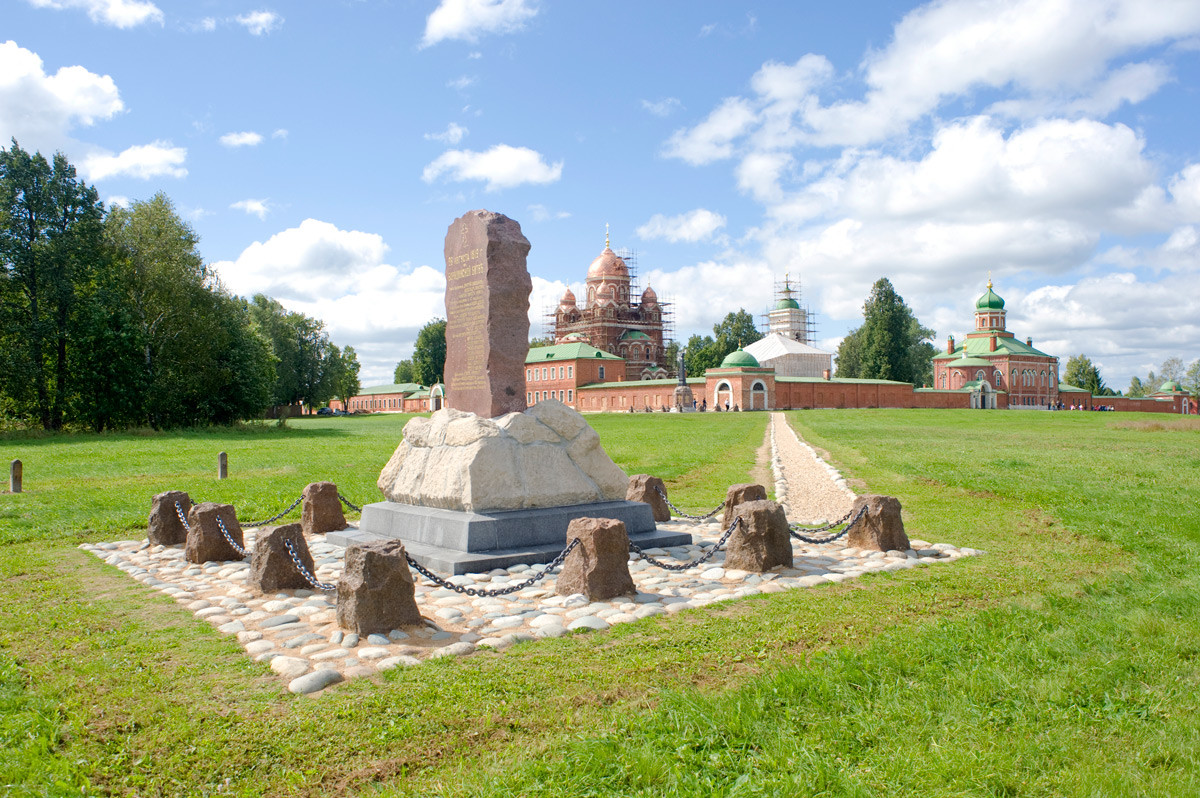 1912 monument to Murom Infantry Regiment commanded by General A. A. Tuchkov. The counterattack of the Murom Regiment began here & reached its end at the site now occupied by Spaso-Borodino Convent. August 21, 2012.

In Russia, the field at Borodino possesses a historic presence that has led to its preservation as a national shrine. The center of the battlefield is occupied by the Spaso-Borodino Convent, formally known as the Convent of the Miraculous Icon of the Savior (Spas Nerukotvorny).

The origins of the Spaso-Borodino Convent sprang from the desire of Margarita Tuchkova to endow a church in memory of her beloved husband General Alexander Tuchkov. At the height of , Tuchkov died at the head of his Murom and Revel Regiment in a furious charge to retake a position captured by the French (the Central Redan). 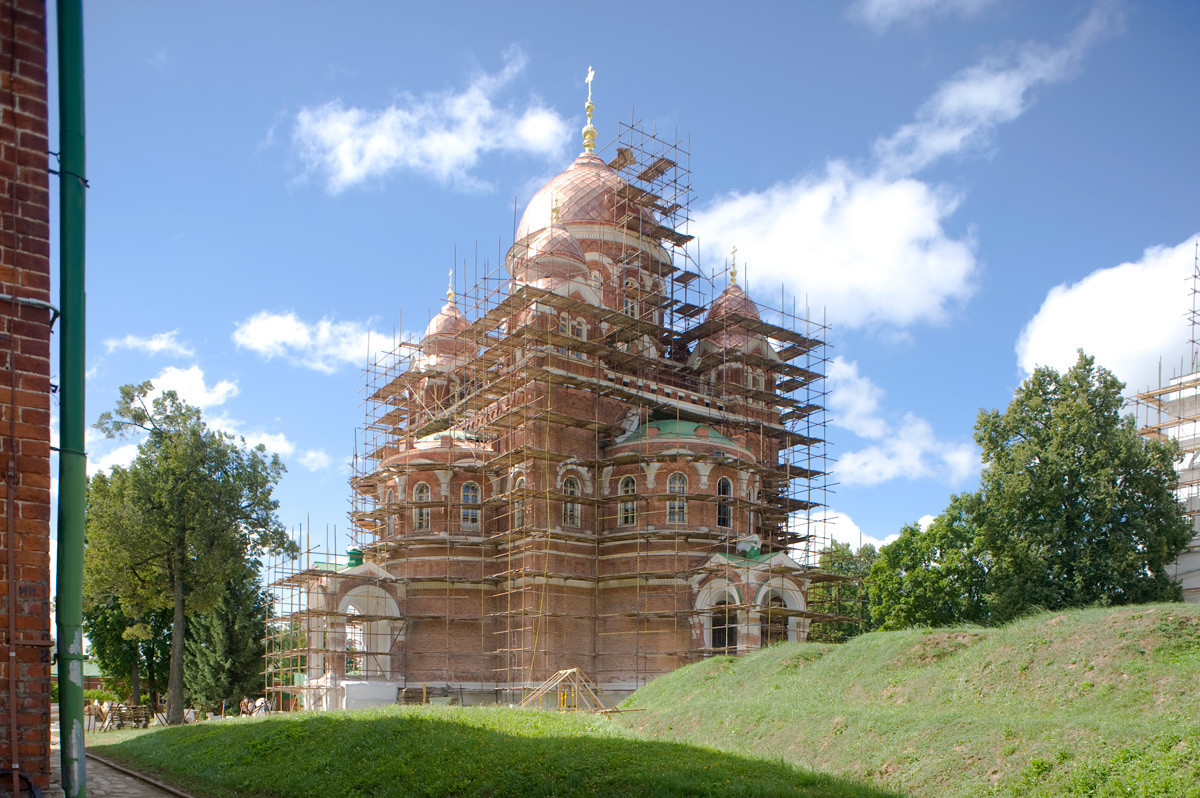 Especially poignant is a rough granite monument to the Murom Regiment, located some 200 yards to the northeast of the convent. It was from this point that General Tuchkov led his final, desperate charge. Prokudin-Gorsky photographed this field from the village of Semyonovskoe to the northeast, as did I in 2012.

The carnage resulting from the attack on the Semyonovskoe redoubt was so great that no recognizable corpse of Tuchkov could be found. Margarita Tuchkova obtained permission to visit the site in October (the French retreat from Moscow began in mid-October), but could not find her husband among a myriad of still unburied corpses. 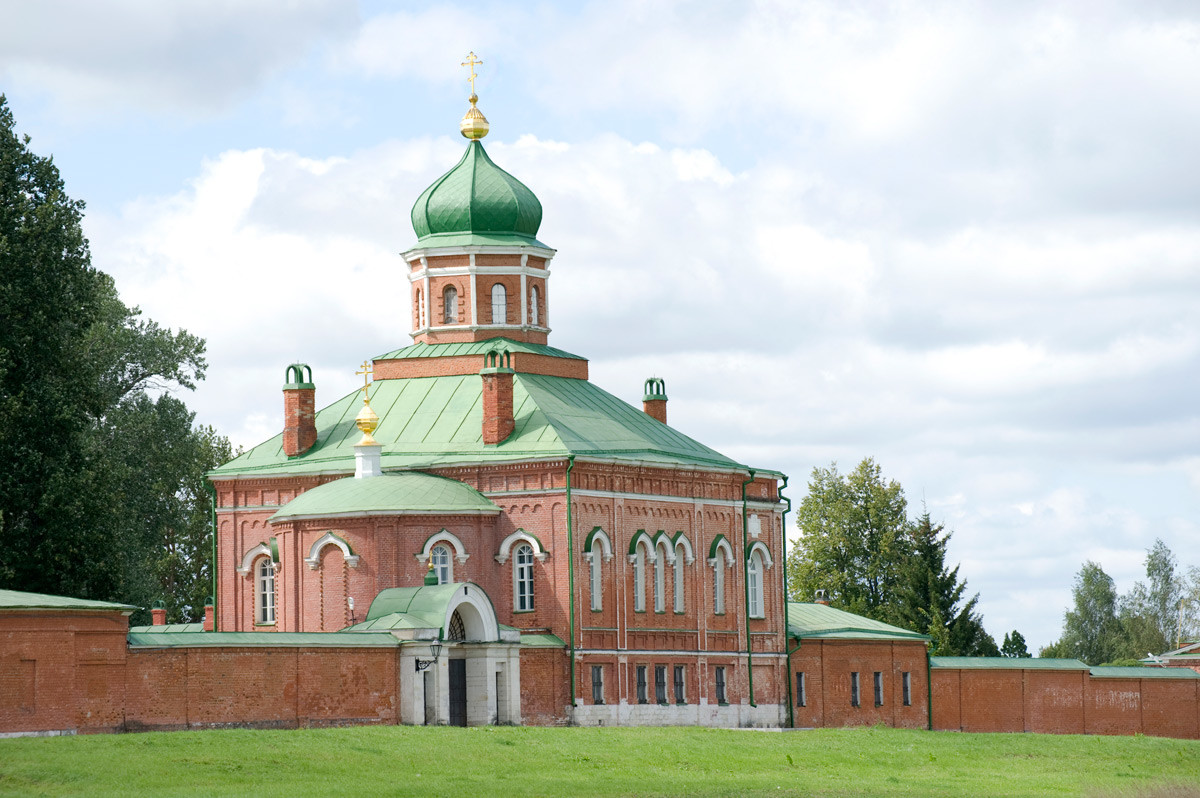 Tuchkova returned to her estate so traumatized that some feared for her mental health. The idea to create a memorial near the site of her husband’s death allowed her to overcome a sense of hopeless despair.

In 1817, her idea to create a battlefield shrine received the support of Empress Maria Fyodorovna, wife of Emperor Alexander I. Tuchkova sold her diamonds to obtain funds, and construction began in 1818. I donated a further 10,000 rubles to complete the church, which was consecrated in 1820 to the Miraculous Icon of the Savior, the icon of the Revel Regiment that Tuchkov had commanded. 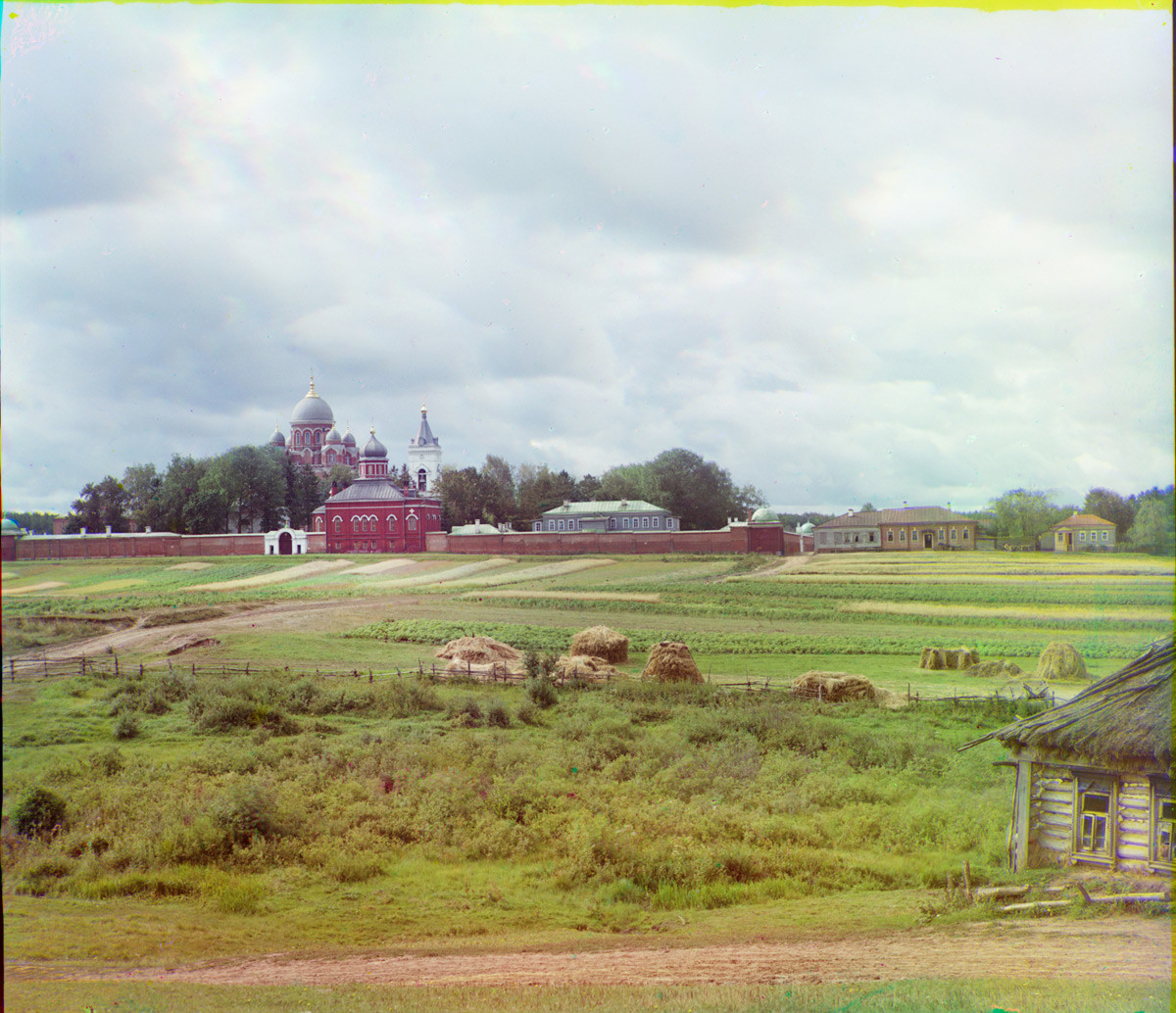 Tuchkova also built a small house nearby where she and her beloved son Nicholas (“Koko”) could stay during visits to the site from their estate near Revel (now Tallinn, capital of Estonia). Nicholas was afflicted with frail health, and his death at the age of fifteen in 1826 occurred during the same period as the death of Tuchkova’s father, Mikhail Naryshkin, as well as the exile of her brother Mikhail Mikhailovich Naryshkin to Siberia for involvement in the Decembrist uprising of 1825.

At this point, Margarita Tuchkova withdrew from society, freed her serfs and moved to the small house near the Borodino Savior Church, where her son Nicholas was buried. Over time other single women — widows and orphans — joined to form a small religious community, which was formally recognized by the Holy Synod in 1833 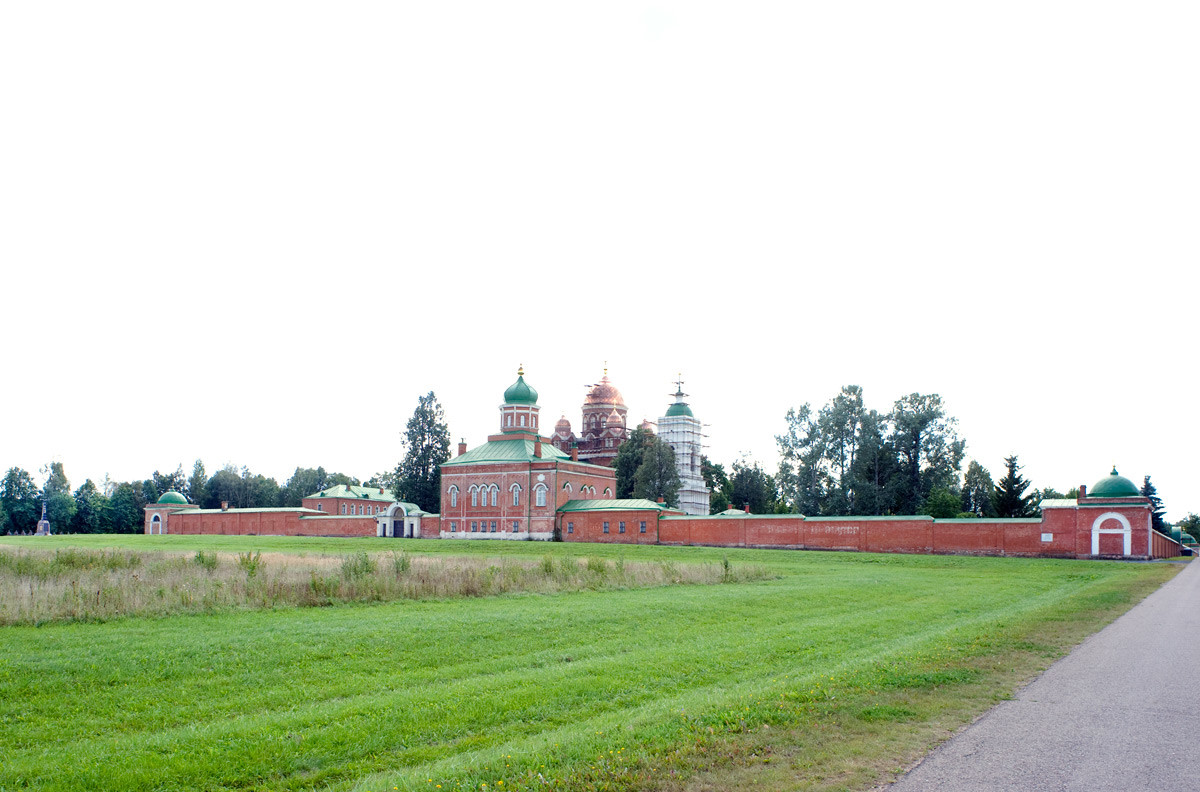 accepted monastic vows in 1836 under the name Melanie, and in 1838 the Borodino community was granted status as a convent through the initiative of Metropolitan Philaret. Emperor I visited the convent in July 1839 and was deeply moved by the meeting. His grant of 25,000 rubles allowed the building of a brick convent wall with chapels.

In 1840, Tuchkova was tonsured at a higher monastic level with the name Maria and became abbess of the convent, which now included 200 adherents. She continued active service until her death in 1852. She was buried in the Savior Church next to her son. 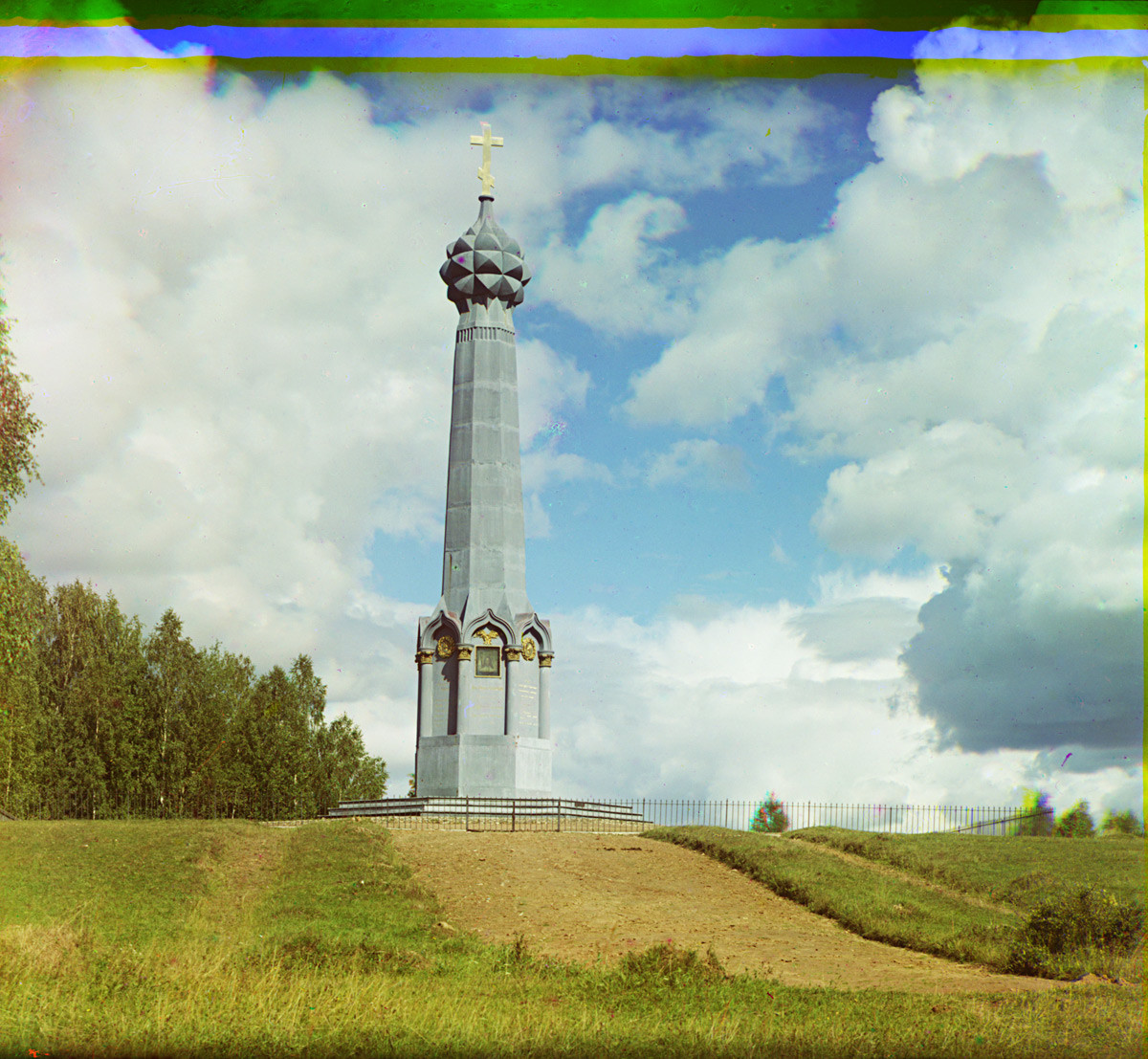 By that time, work had begun on the convent’s main cathedral, designed by Mikhail Bykovsky. In 1859, it was consecrated to the Vladimir Icon of the Virgin, believed to have miraculously caused the retreat of the conqueror Tamerlane from Russia in 1395.

In the early 1870s, the nearby Church of the Decapitation of John the Baptist was built as an additional memorial to soldiers who perished in the battle. In preparation for the 1912 , part of the Borodino fortification system known as the Bagration fleche (after General Bagration) was recreated within and just outside the convent walls 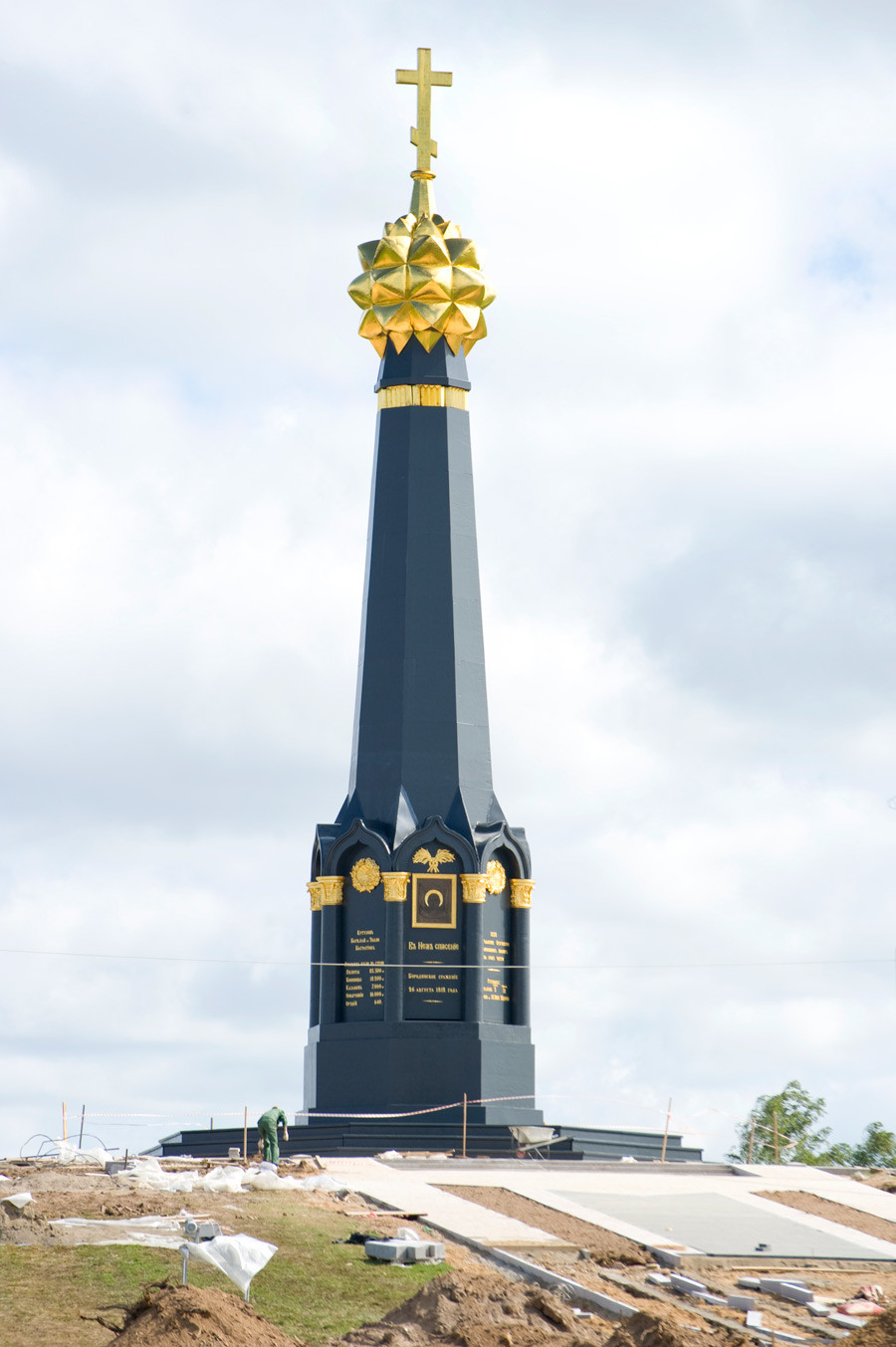 the latter half of the 19th the Spaso-Borodino Convent became a national shrine to Russian military valor. During his work on War and Peace, Leo Tolstoy visited the convent in September 1867 and stayed overnight at its hostel.

Among his several Borodino views, Prokudin-Gorsky photographed the convent from the north, with carefully cultivated vegetable plots in the foreground and the large Vladimir Cathedral visible beyond. I photographed a similar view when the cathedral restoration was nearing completion for the 2012 bicentennial observance 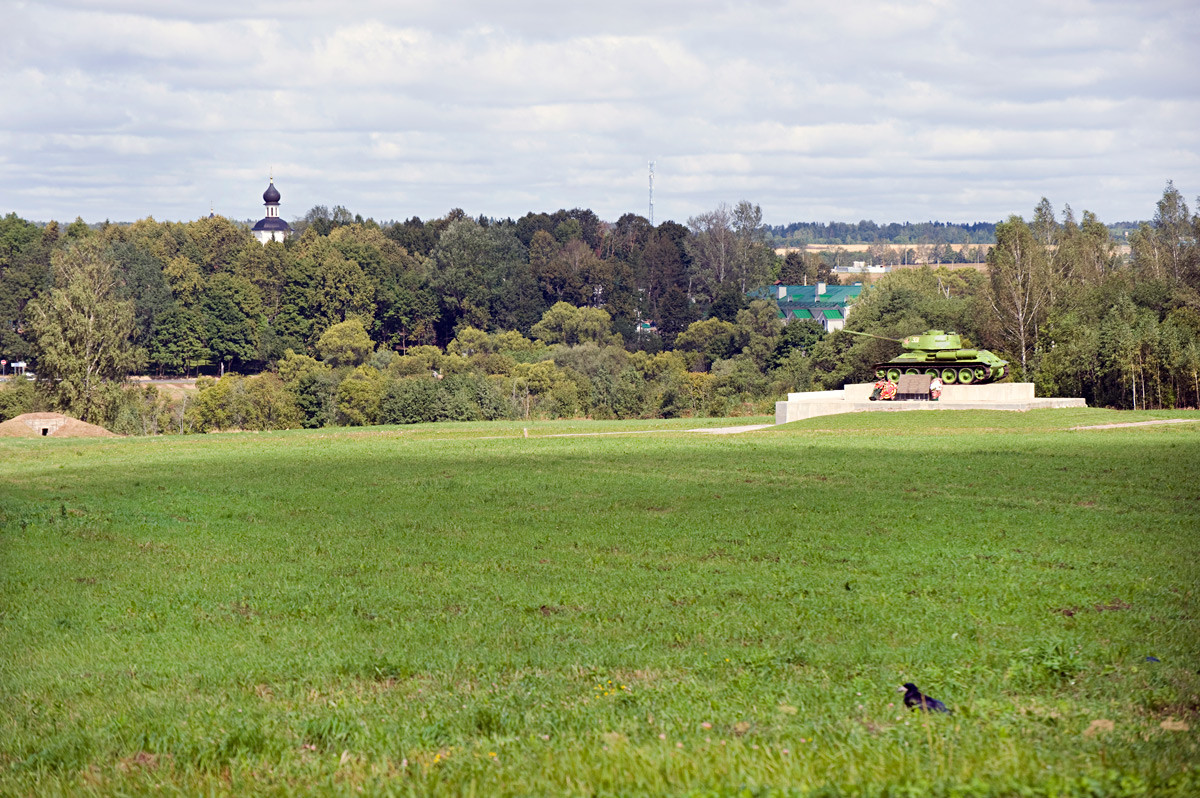 also photographed the main battlefield monument, a large obelisk (90 feet in height) that serves as the primary monument to all Russian soldiers who took part in the battle. Designed by the architect Antonio Adamini and dedicated in the presence of Emperor Nicholas I in July 1839, the monument also contained the tomb of the great Russian commander Prince Pyotr Bagration, whose remains were reburied there in 1839.

In 1932, the obelisk was exploded by Soviet authorities virulently hostile to memorials to the Patriotic War, as the war against Napoleon is known in Russia. During the early 1930s, such monuments were seen as relics of the tsarist era and closely related to the Orthodox Church. Other Patriotic War memorials destroyed in at that time include the Cathedral of Christ the Savior in Moscow. 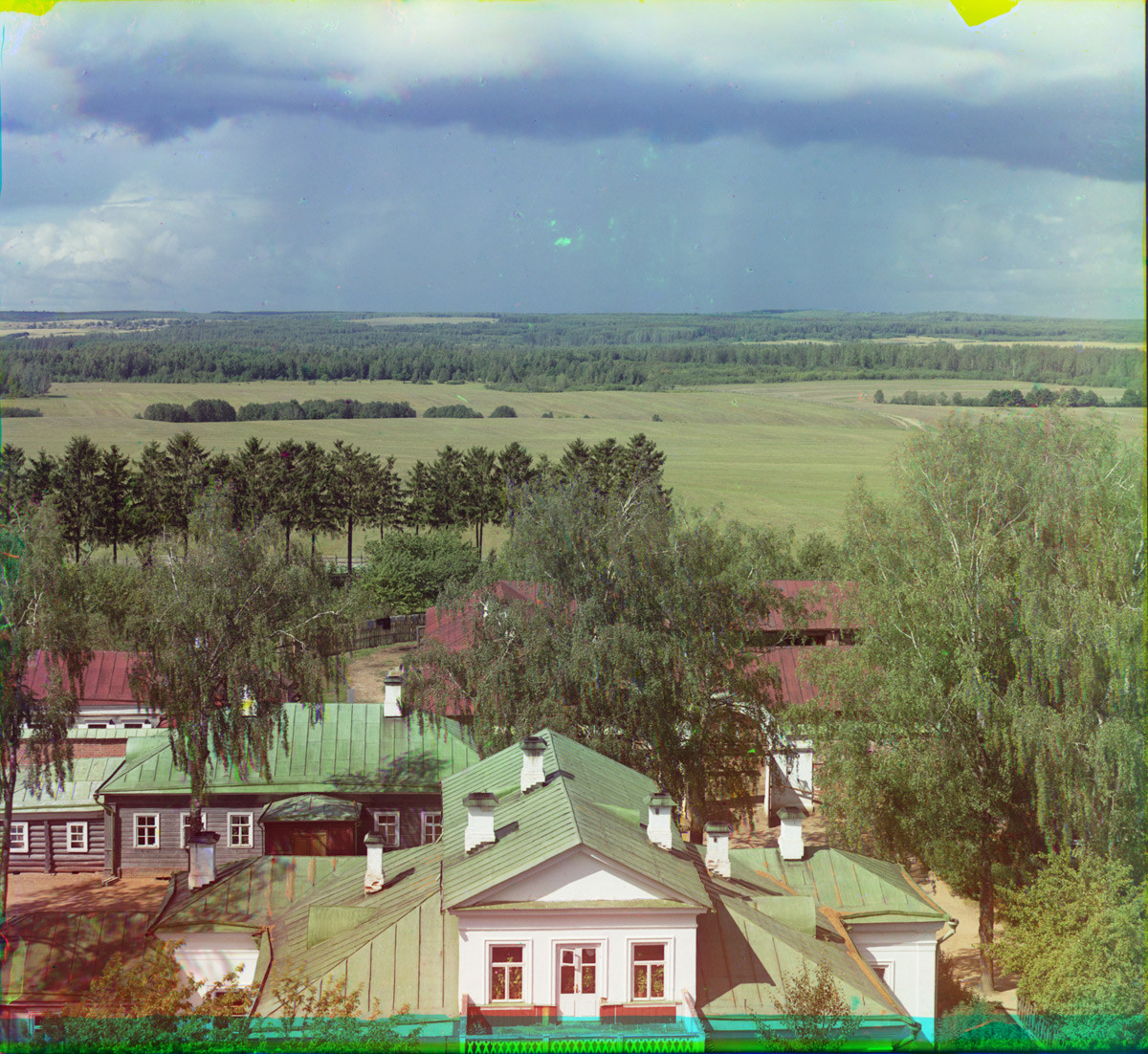 Spaso-Borodino Convent. View from bell tower toward field over which French attacked the Bagration Fleche. Summer 1911.

Those attitudes changed with the onset of the war against Nazi Germany — the Great Patriotic War. Once again, Borodino Field was attacked by the invader (in October 1941), and the spirit of the first Patriotic War was summoned in defense of Moscow. An expression of this link is the T-34 tank on a pedestal down the slope from the main monument. My photograph of this part of the Borodino Field includes the graceful Church of the Smolensk Icon of the Virgin in the distant background.

The Borodino obelisk was recreated in 1987 in preparation for the 175th anniversary of the battle. The tomb of Prince Bagration was also restored, and 65 bone fragments (found in the 1932 demolition debris) were reburied. My photograph shows the monument being refurbished in advance of the bicentennial. 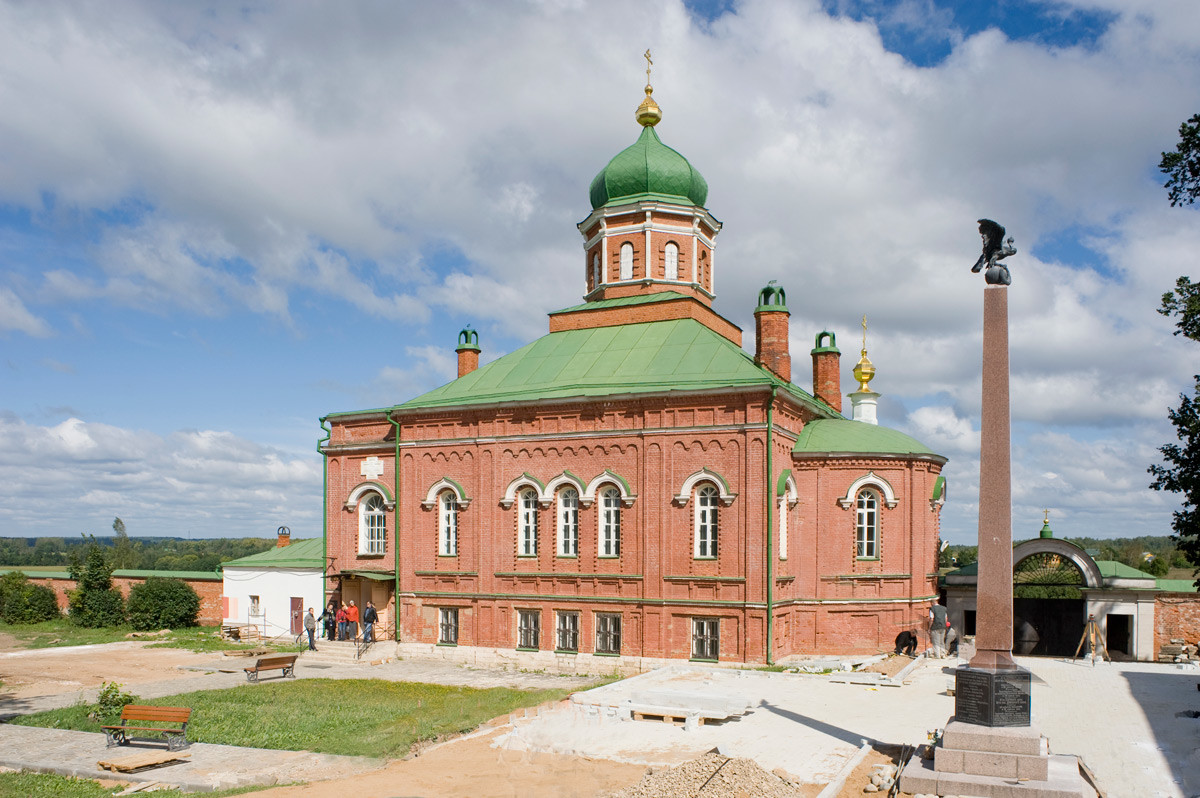