Church of the Smolensk Icon at Borodino: Witness to two national struggles 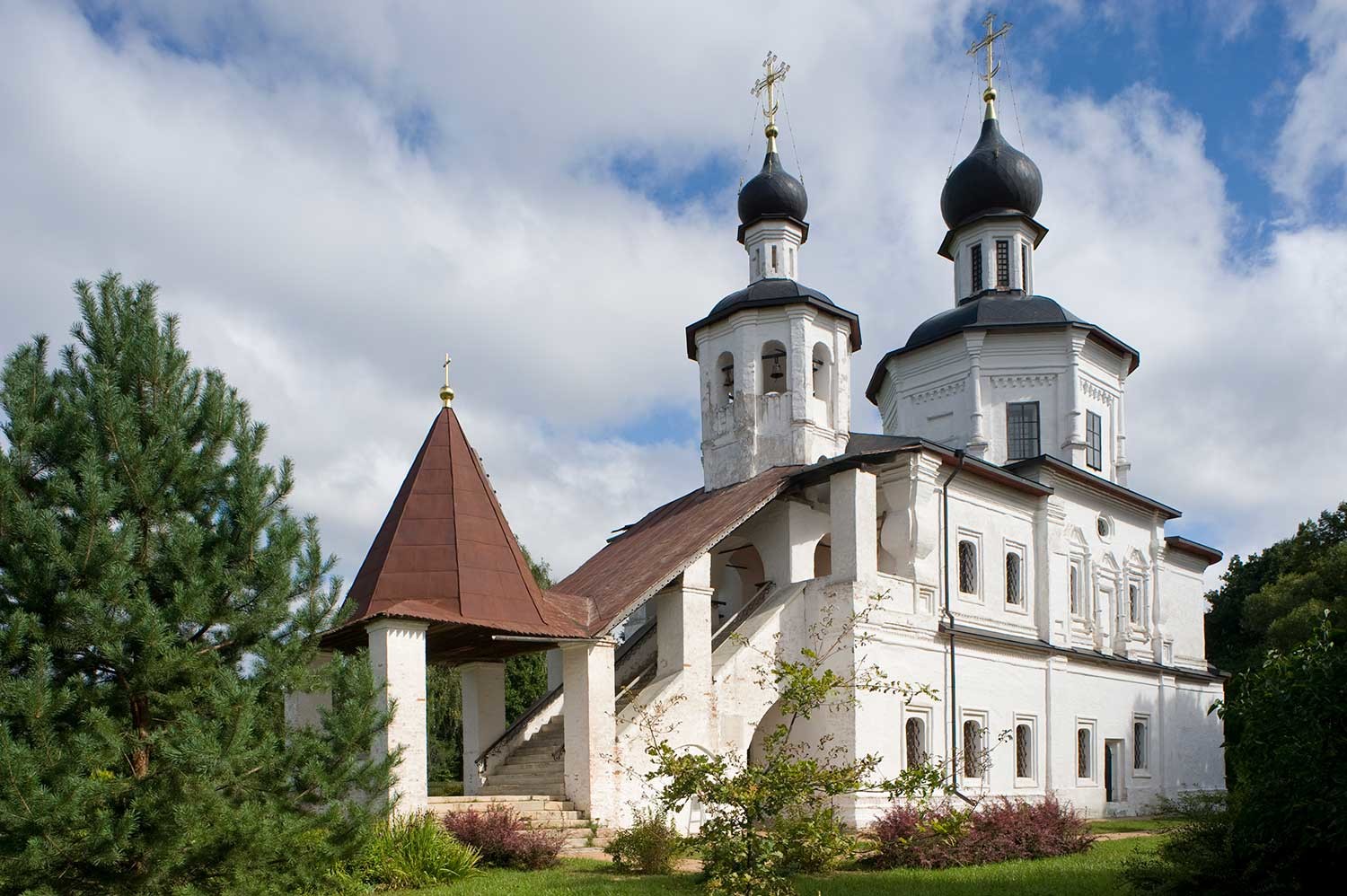 At the beginning of the 20th century, the Russian chemist and photographer Sergei Prokudin-Gorsky developed a complex process for vivid, detailed color photography (see box text below). His vision of photography as a form of education and enlightenment was demonstrated with special clarity through his photographs of architectural monuments in the historic sites throughout the Russian heartland.

One such place is the village of Borodino, which Prokudin-Gorsky visited in the summer of 1911 as part of a project to document sites connected with the centennial of Napoleon’s invasion of Russia during the War of 1812. At Borodino, Prokudin-Gorsky photographed not only sites associated with the titanic struggle between the Russians and the French, but also the village church, fated to witness great conflicts in both 1812 and 1941. My photographs of the area were taken in late August 2012, two centuries after the battle.

Throughout the world, Borodino is best known from Leo Tolstoy’s incomparable description of the battle in his epic novel “War and Peace.” In Russia, the field at Borodino has a specific physical presence that has been preserved as a national shrine. It was here that the Russian and French armies clashed on Sept. 7, in an epochal struggle before the gates of Moscow. 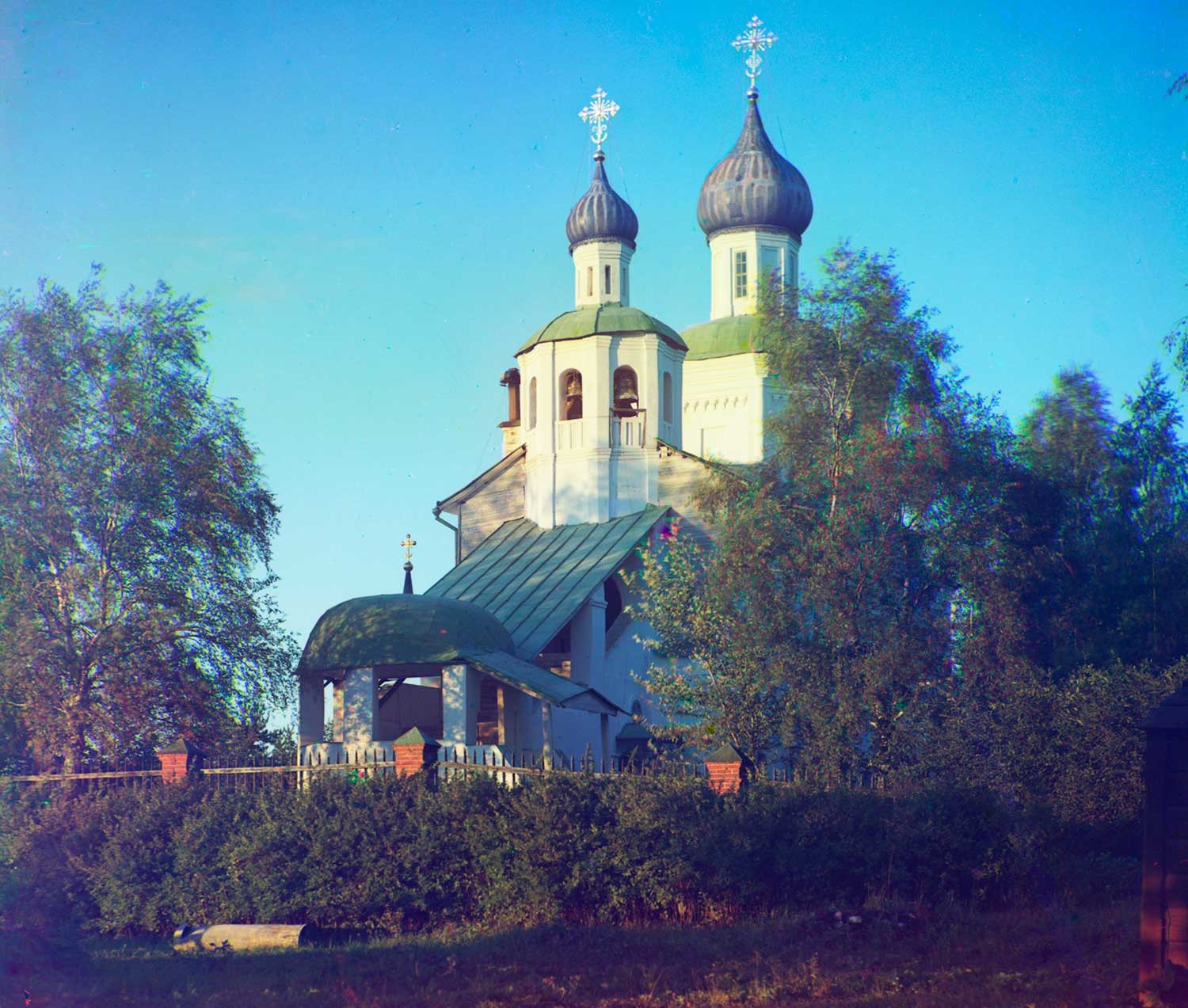 The Battle of Borodino (known to the French as the Battle of Moscow) is considered to have been the bloodiest in the Napoleonic wars, exceeding Waterloo. The French won a tactical but failed to destroy Russian forces under the command of Prince Mikhail Kutuzov. Although the retreat of the Russian army resulted in the destruction of much of Moscow, the occupation of the ancient capital led to the disintegration of the French Grand Armee.

The Protector of the East

The eastern approach to Borodino from Mozhaisk (55 miles west of Moscow) is graced by the Church of the Smolensk Icon of the Virgin, the image revered as a protector against Russia’s enemies from the west. Originally dedicated to the Nativity of Christ, the whitewashed brick structure was built in 1698-1701 on the initiative of the owner of the village, Timofey Savyolov, who was a member of a family closely connected with the tsar’s court. His brother Ivan became Patriarch Joachim, head of the Russian Church from 1674 to 1690. 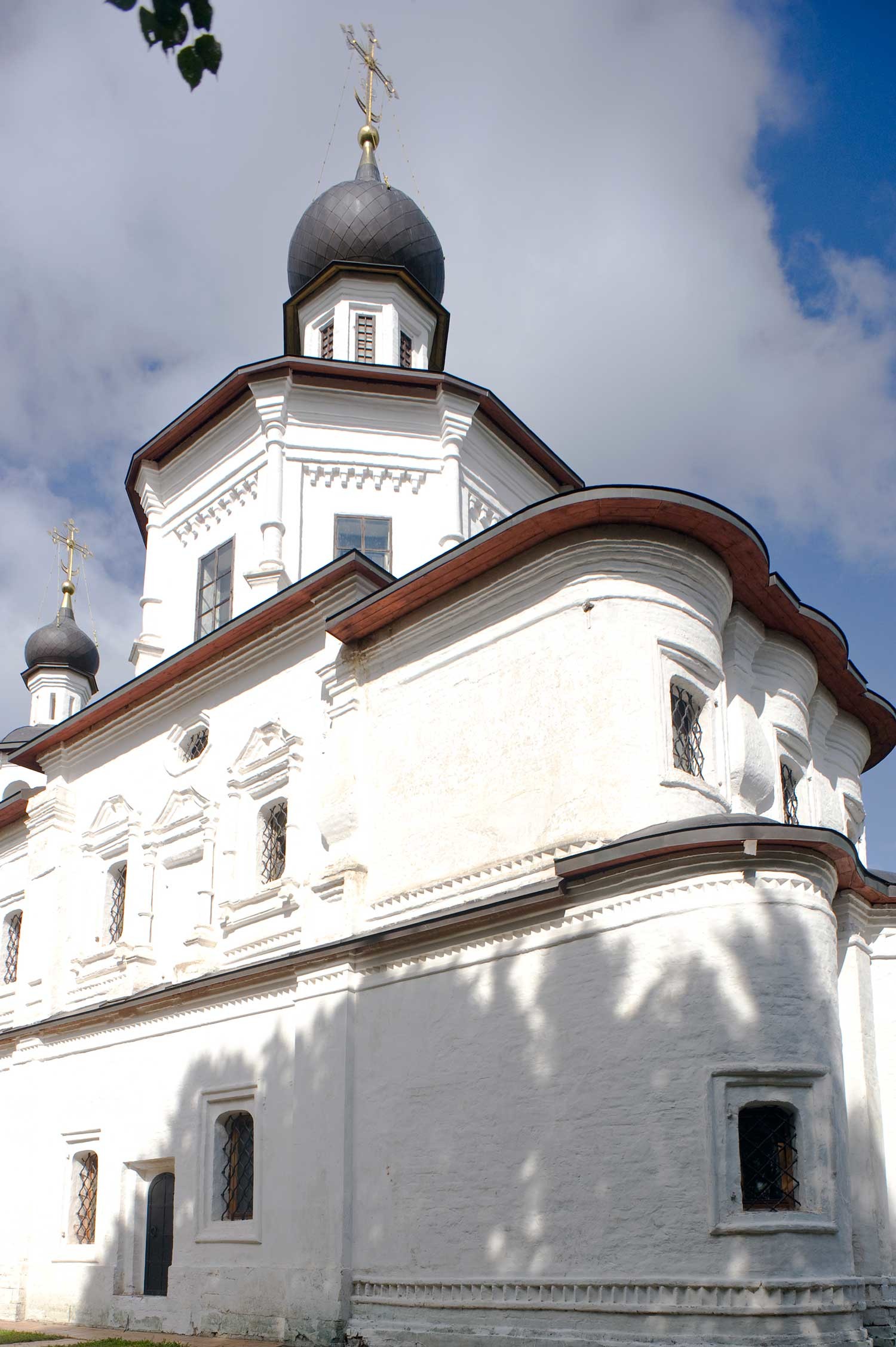 The church has two stories, the lower of which contained a secondary altar dedicated to St. Sergius of Radonezh. With its octagonal upper structure and single cupola, the church represents a simplified version of late 17th-century “Moscow Baroque” tower churches. On the west a narthex and bell tower, with a covered stairway to the ground level. My view from the southeast gives the best sense of the church structure.

In 1798, the village and church were acquired by retired Brigadier Vasily Davydov (1747-1808), father of the renowned poet and war hero, Denis Davydov (1784-1839). Denis and his sister Alexandra spent much of their childhood there. 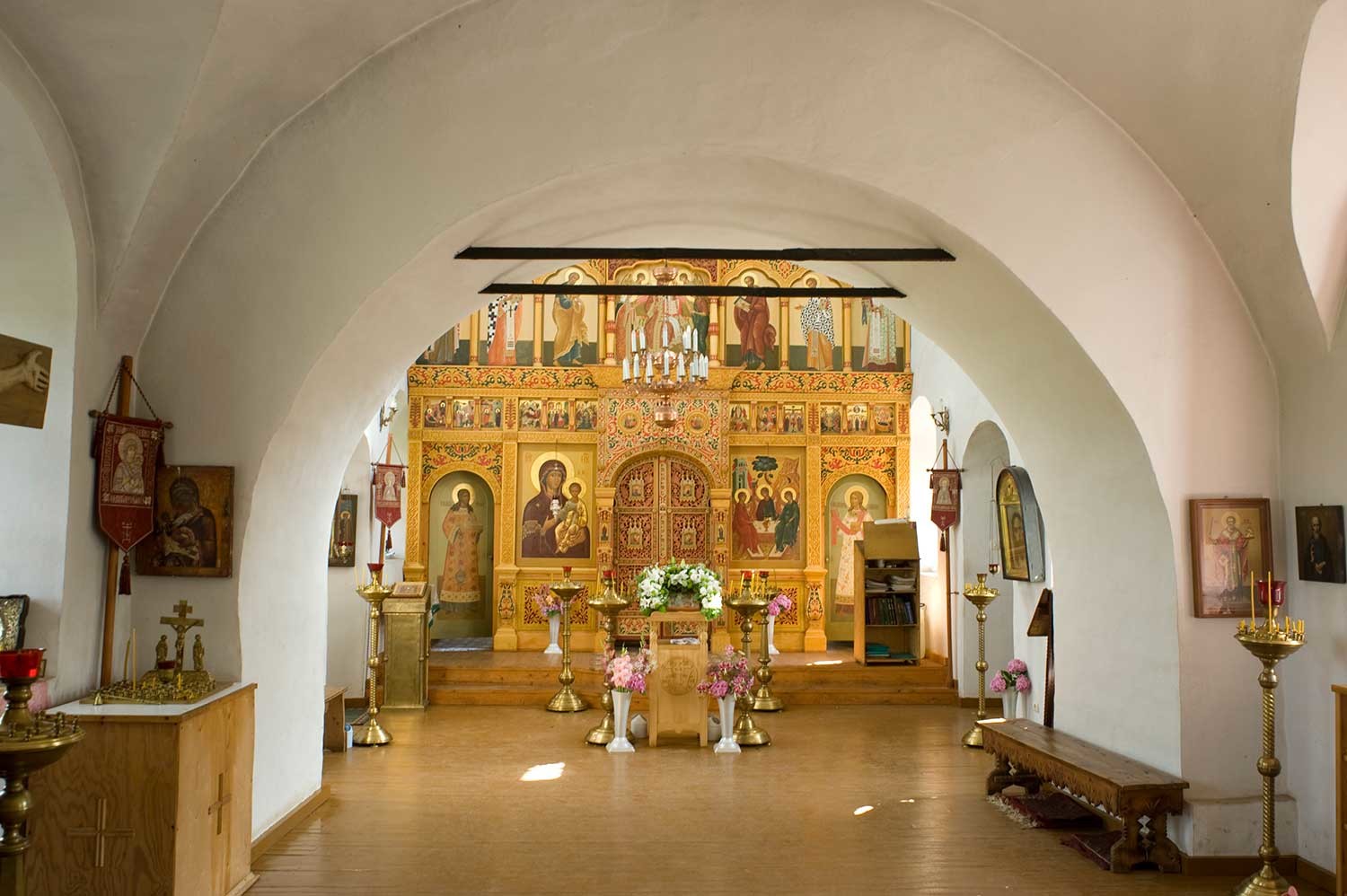 During the Borodino battle, the church’s bell tower served as a Russian observation point and was damaged by French artillery, which also hit the dome of the church. The French occupation of the village resulted in severe fire damage to the church interior.             After the war, the task of rebuilding the ruined church was beyond the means of the village owners, the widow Elizabeth Savyolova and Alexandra Davydova. In 1816, the lower church, with the altar to St. Sergius, was repaired on the initiative of Margarita Tuchkova (Naryshkina), widow of General Alexander Tuchkov, who perished at the Borodino battle. She later established the Savior-Borodino Convent in his memory, which Prokudin-Gorsky also photographed.

In 1824 the Borodino church was visited by the leading Orthodox prelate, Metropolitan Philaret of Moscow, who provided funds to restore the upper church in 1826. Nonetheless, the upper church remained unfurnished and unconsecrated. In 1830 Alexandra Begicheva (formerly Davydova) sold the village to Elizabeth . 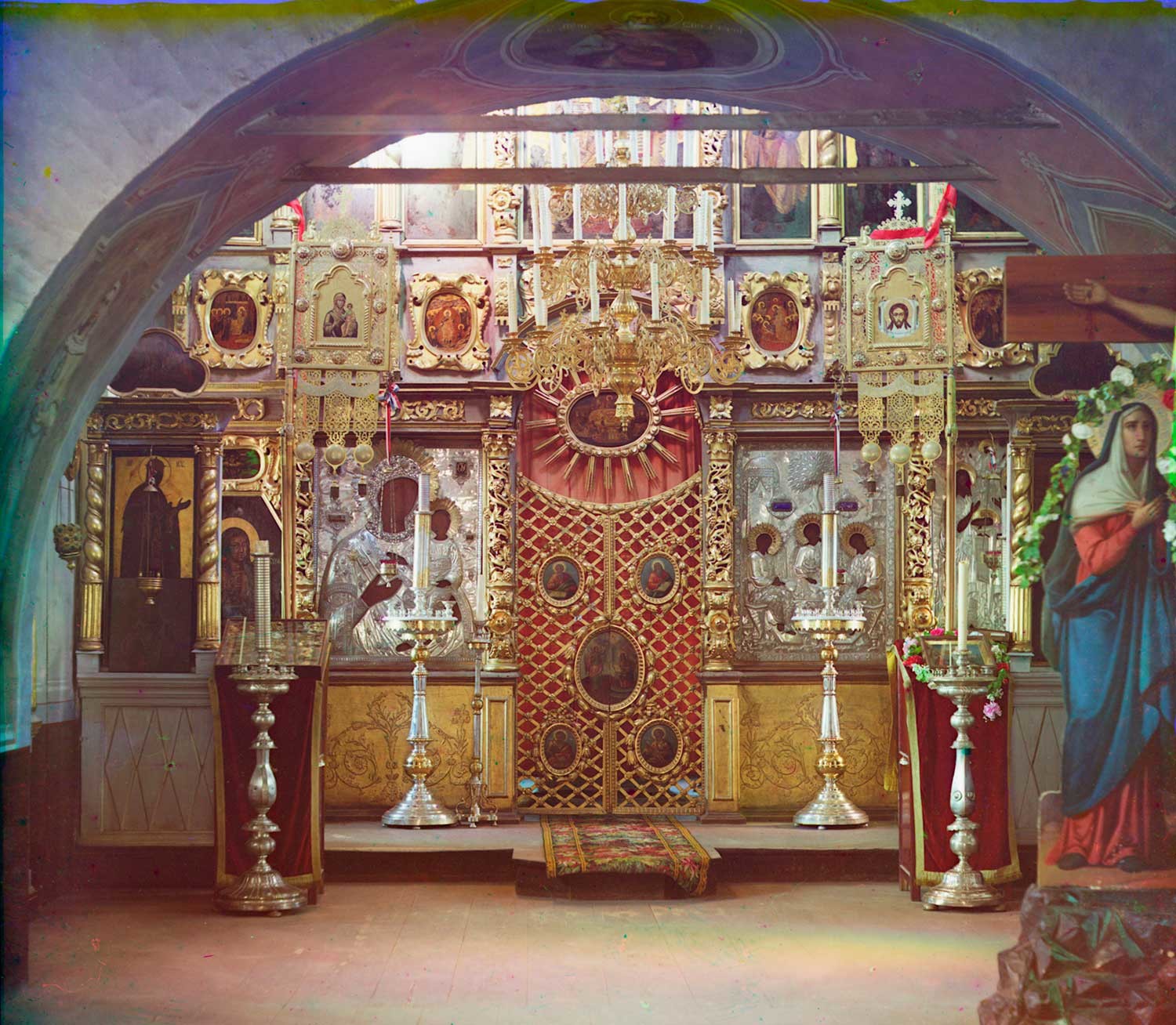 In July 1837 Tsarevich Alexander, the heir to the throne, visited Borodino and made a substantial donation to the church. At the end of the upper church acquired a remarkable icon screen through a complicated twist of fate involving Moscow itself.

A monument the nation

There had long been plans to create a national memorial in Moscow to Russian sacrifices during the war against Napoleon. Various sites were proposed for the Cathedral of Christ the Savior, and in the early 1830s, final decisions were made by Emperor Nicholas I as to the architect (Konstantin Ton) and the site, adjacent to the St. Convent in the center of Moscow. 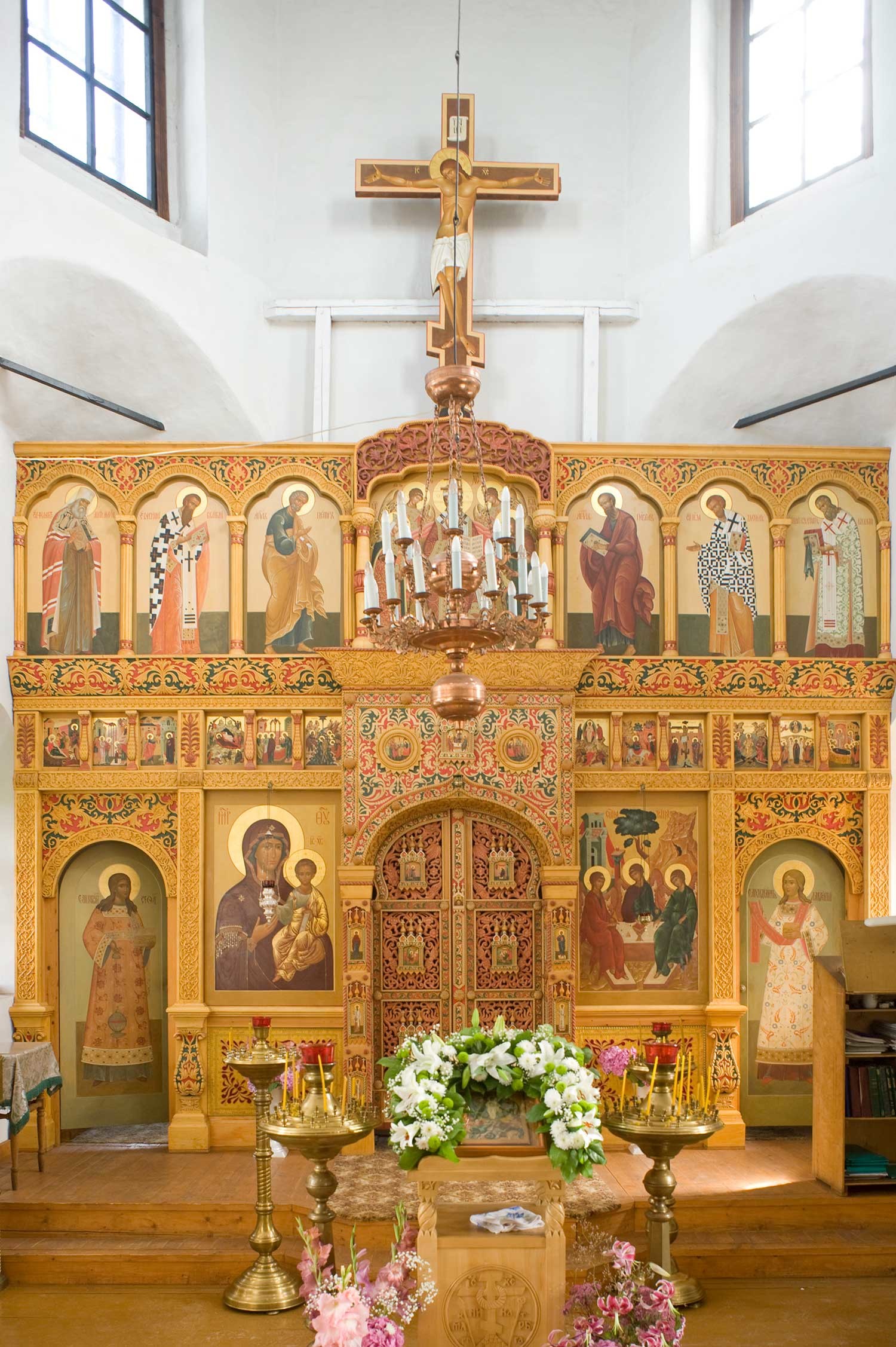 In preparation for clearing the site, work began in 1837 on moving the St. Convent to a new location and vacating the original buildings, among which was the early 17th-century Cathedral of the Transfiguration and St. . The decision was made to dismantle the cathedral’s exquisite late 17th-century icon screen and reinstall it in none other than the Borodino church. Its elaborate “grapevine” carving is clearly visible in Prokudin-Gorsky’s interior photograph.

In view of its historic significance, the Borodino area was purchased in 1837 by Nicholas I from Elizabeth Voyeikova as a gift to his son Alexander. During a solemn commemoration of the battle, in July 1839 the main altar of the Borodino church was consecrated by Metropolitan Philaret to the Smolensk Icon of the Virgin. This icon in the Hodegetria form was closely associated with Russian valor at Borodino. The sacred image was venerated by both major Russian commanders in the conflict — Field Marshal Mikhail Kutuzov and General Peter Bagration, who died from wounds suffered in the battle. The church treasures included Bagration’s personal copy of the Smolensk Icon. 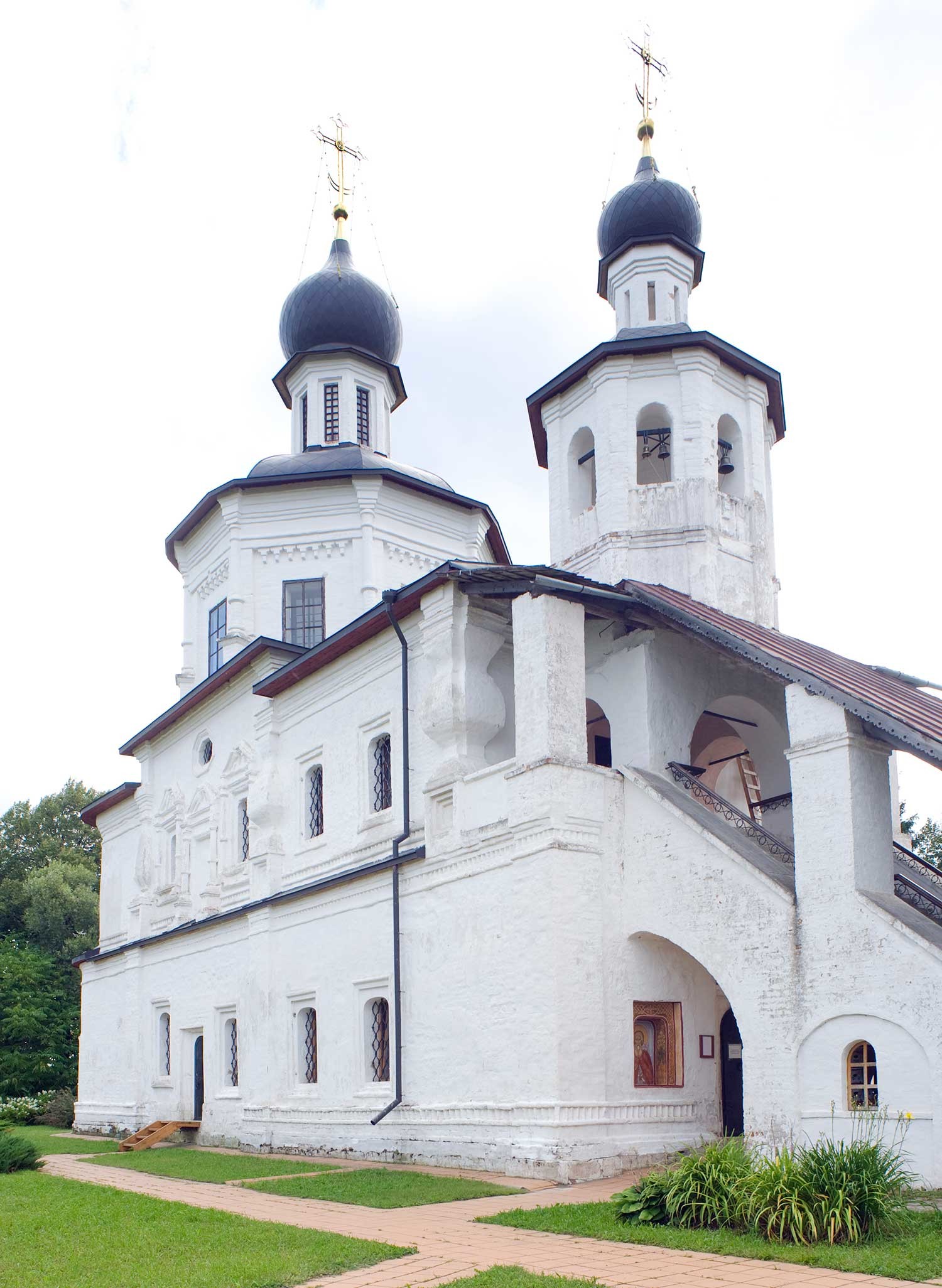 In subsequent decades, the church continued to be patronized by the royal family. Alexander II, who had long revered the shrine, visited with his wife, Maria, in June 1861. Nicholas II visited in 1912 on the bicentennial of the battle. In preparation for that anniversary, the church was refurbished by the artist Anikita Khotulev. Prokudin-Gorsky’s 1911 photographs of both the exterior and interior are an exceptionally valuable record of the Borodino church before the cataclysm or war and revolution.

During the Soviet period, the church was closed in 1930 and disfigured over the decade by various workshops. A state commission in 1937 determined that there was little justification for an extensive restoration.

The Borodino church was fated to again witness the carnage of war in the fall of 1941, during the prolonged Battle of Moscow during World War II. On Oct. 13, Red Army units clashed on the Borodino field with elements of the Wehrmacht 40th Motorized Corps before retreating toward Moscow. When Borodino was retaken on Jan. 21, 1942, little remained of the largely wooden village, which had been burned by the retreating Germans. 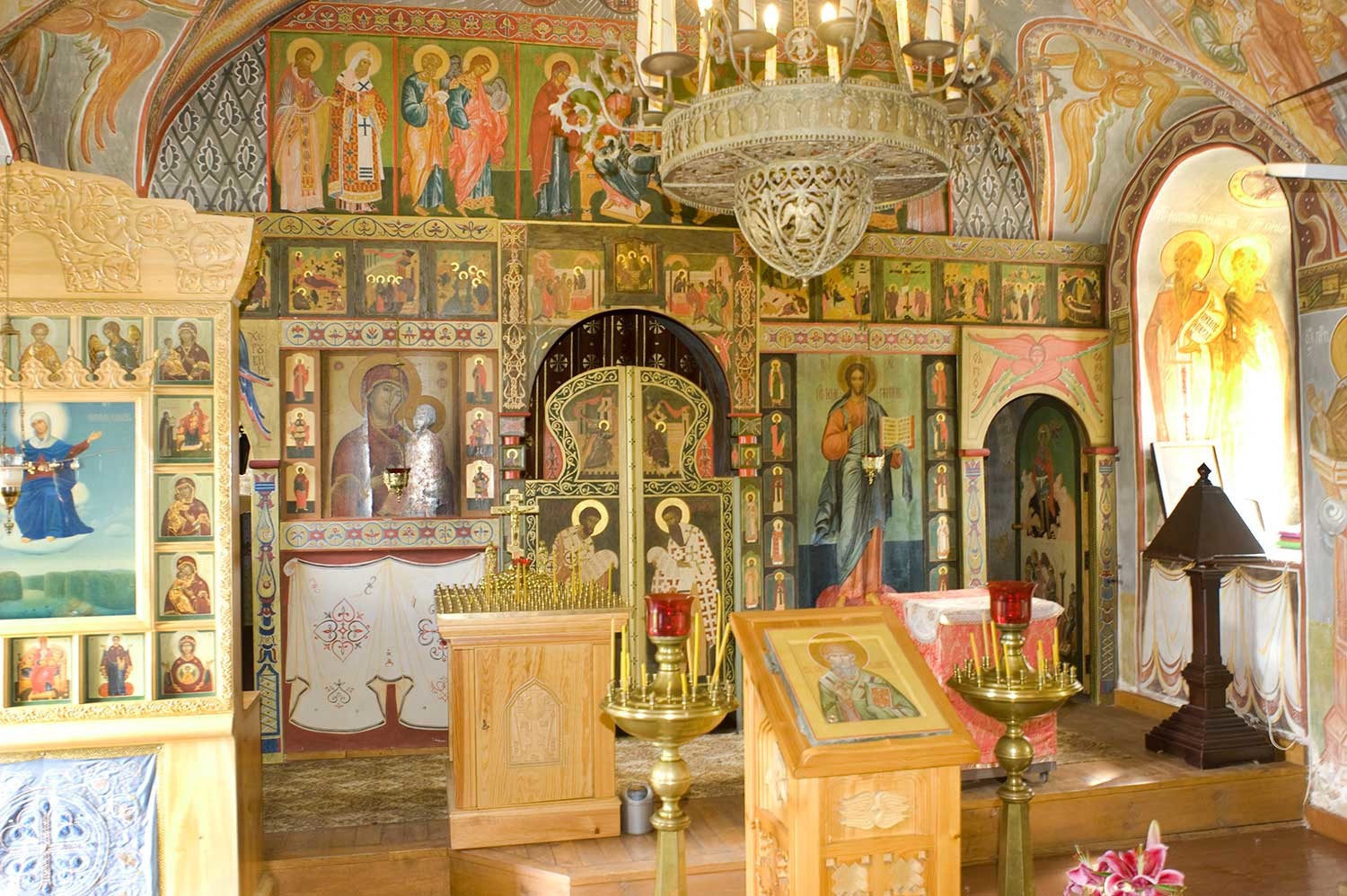 Miraculously, the church survived the fighting and three months of occupation. However, during the years following the war, it was subjected to depredations by the local kolkhoz head, who attempted to dismantle the structure for brick. The bell tower was demolished, but resistance from historians and preservationists prevented a complete destruction.

As the Borodino sesquicentennial (1962) approached, renewed efforts to restore the church involved the prominent director and actor Sergei Bondarchuk, who supported the exterior restoration of the church (with rebuilt bell tower) for his gargantuan four-part film “War and Peace” (1965-67). Following the making of the film, the restored church was entrusted to the State Borodino Museum.

Toward the end of the Soviet period, the Borodino Museum returned the church to the Diocese of Moscow. The first services were held in the lower (St. Sergius) part of the church in 1989, and the upper part was consecrated for services in 1995. A thorough renovation, begun in 1999, involved the creation of new icon screens for both upper and lower churches, as well as wall paintings for the lower church by Peter Stepanov, a grandson of Georgy Malenkov (a political figure of enormous power in the 1940s and early 1950s). 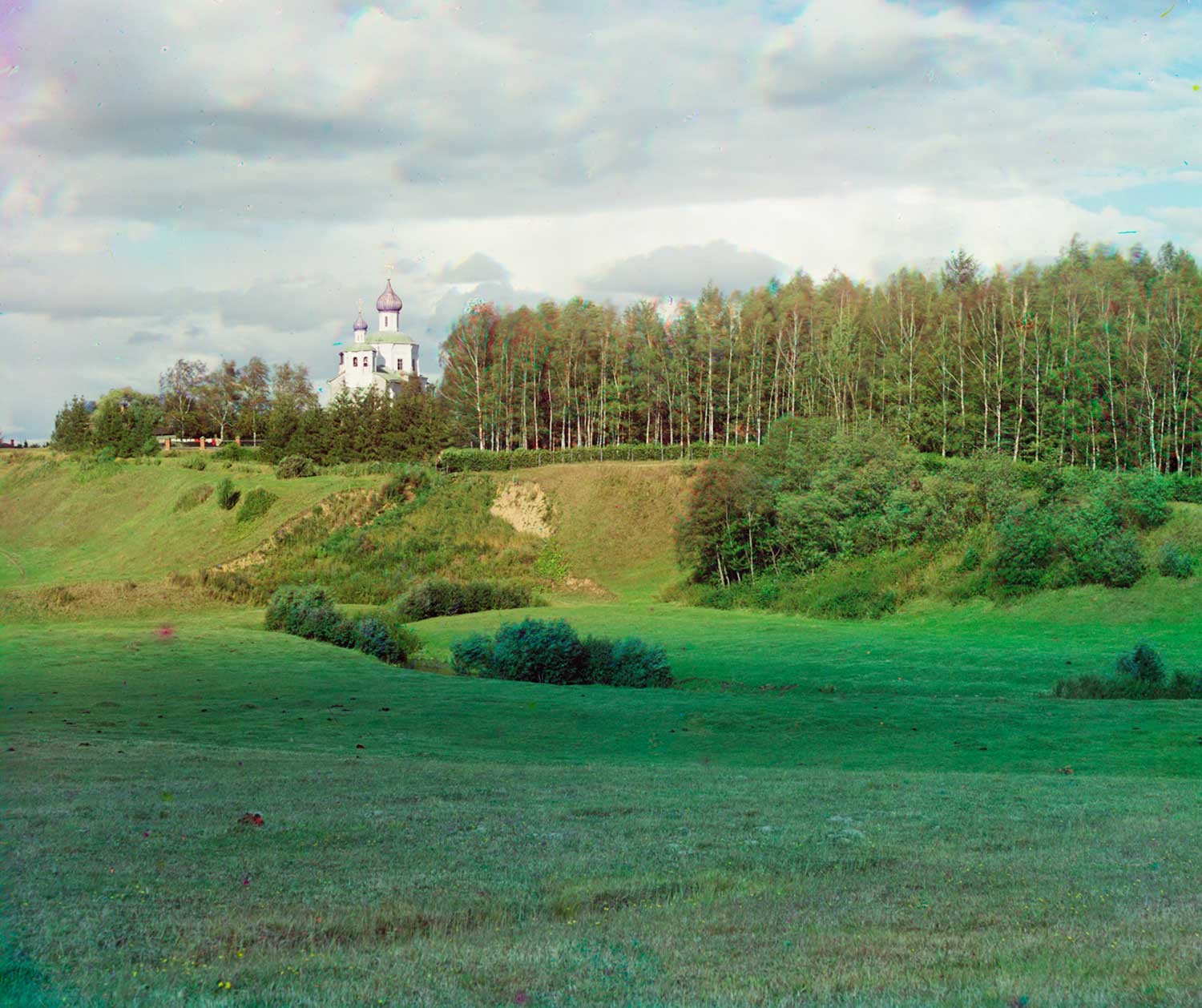 Although Prokudin-Gorsky did not photograph the lower chapel, my photographs from 2014 show the upper and lower spaces after restoration. Unfortunately, the intricate icon screen from the St. Convent now exists only in the fragments visible in Prokudin-Gorsky’s photograph.

On the exterior, a comparison of my photograph with Prokudin-Gorsky’s lyrical evening view reveals a small pointed tower instead of the earlier low dome. His photograph shows the bell tower flanked by two unusual wooden galleries, lost during the Soviet period.

Our distant views have different perspectives: his from the southwest gives a sense of the church’s commanding view of the battlefield, while mine from the northwest shows part of the field with a T-34 tank, part of a monument to the Battle of Moscow. Despite its modest proportions, the Borodino church and its complex fate represent an extraordinary confluence of historic events. 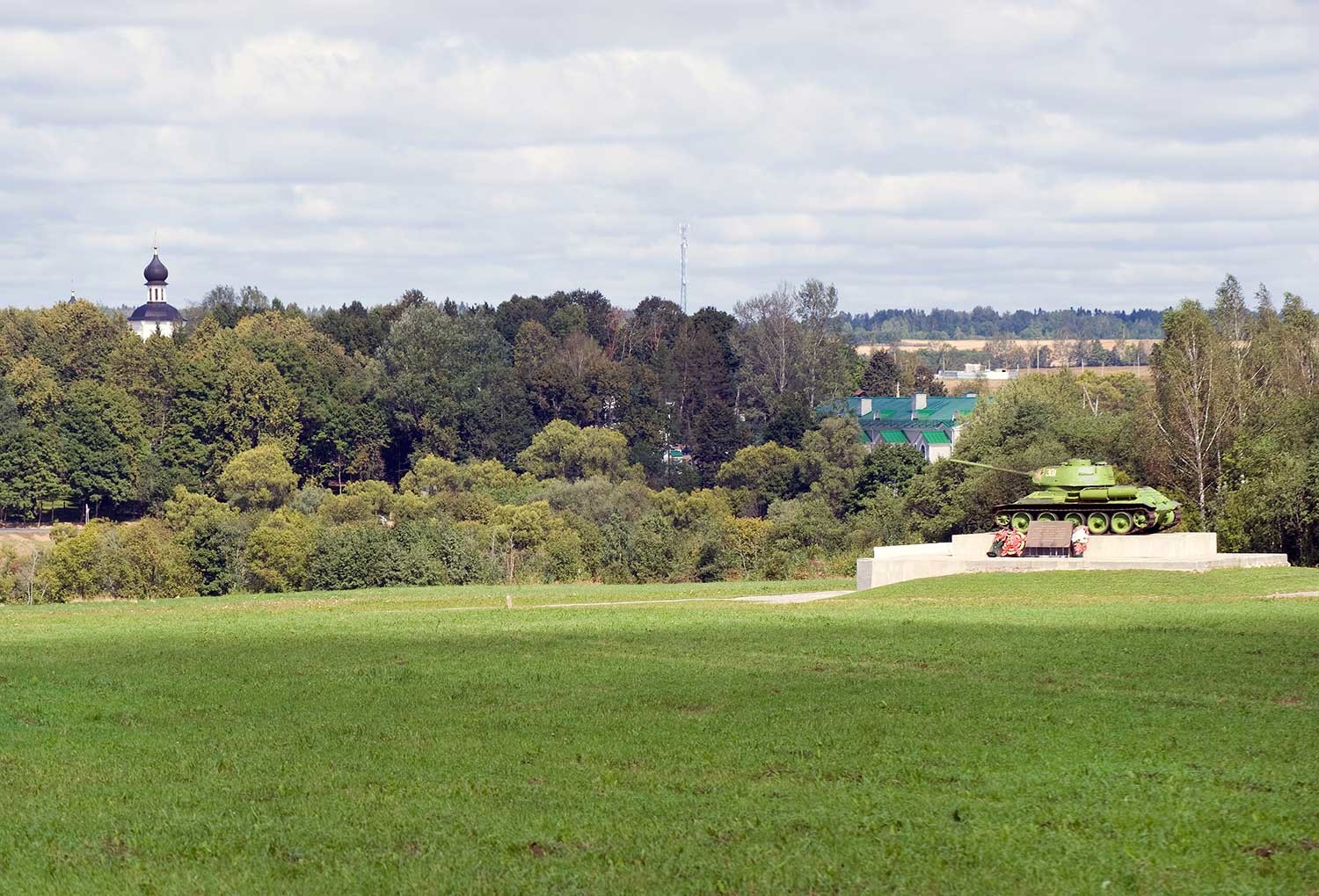